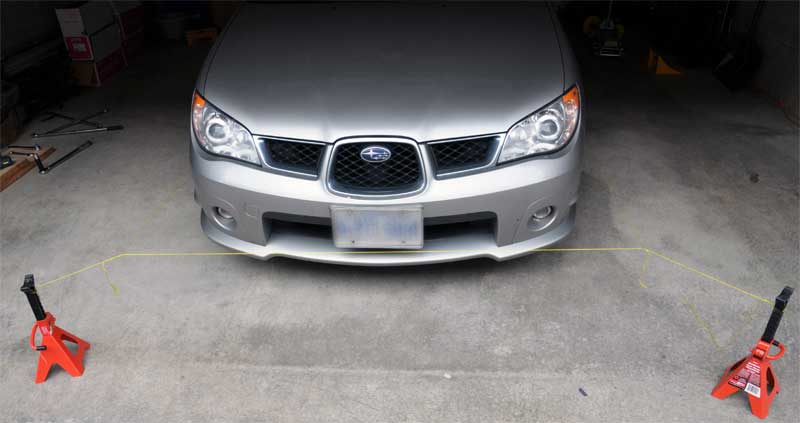 I stepped into the garage, the one room in the house that is 100% Nelson’s, to find our car contained within thin, yellow rope. I carefully stepped around to the front of the garage, wondering what the heck was going on and before I could ask, Nelson tells me he’s a genius. Can you guess what he’s doing from the picture? Most people would simply bring their car to a garage/shop to get this done.

I had come out just in time to assist him in jotting down 3-sets of numbers per wheel, all very different numbers, which made me think the alignment was completely off (I know nada about cars). What I learned was that the numbers I wrote down did not actually matter. It was how those numbers translated into angles that was important.

I knew that this little project had captured his interest as he has been creating an online “form” to do the calculations to determine if his alignment is ok based on his inputs. Being the nerd that he is, he’s self-teaching himself javascript to get this form working the way he needs it to. My input has been to get his work W3C validated (that was when he first started). He’s never cared much for validation, which is evident from his non-existent DOC TYPE. Last I checked (a few hours ago), he is up to 83 errors.

Update: He now has his site online. If you’d like to align your own wheels, visit Nelson’s DIY Alignment Calculator.