Yesterday after work I went to an awesome party. It was a sewing party, but no ordinary sewing party. Picture it – sewing with 7 other fabulous girls, sipping champagne and stuff our faces with chocolate cupcakes.

The party was hosted by my wonderful friend, Sandy, and it took place at The Sewing Studio at Yonge and Summerhill. I’m not sure if I’ve mentioned it before, but this is the same studio where I took my sewing lessons. It’s a great place to learn and hang out. Anyway, our two instructors for the evening were Sheila and Christina and they did a superb job of guiding our mixed-level group. The project was a lined clutch. It wasn’t a terribly difficult project as it was basically sewing rectangles, but the fun was in the embellishments. A number of the girls used the iron-on, metallic studs, which looked very hip (see group photo), but I opted for a complete-sew project. Sheila taught me how to make the “ruffles” on the flap of my clutch. The design was really Jesse’s idea – she’s my very crafty friend.

It was such a fun evening and it made me realize how much I have actually missed sewing. Once my contract is completed and I (might) have some free time, maybe I’ll dust off my sewing machine and start a new project. 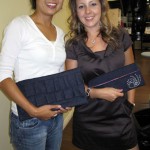 Me and Jesse with our clutches 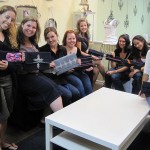