We were just at Peggy’s Cove. The day looked so beautiful as we drove out of the Halifax, but as soon as we got close to Peggy’s Cove, we were surrounded by fog. The disappointment!

Although I spent 4 years in Halifax, I have never been to Peggy’s Cove until now. I can see why this place is so famous – it has such great photo opportunities, but the fog got in our way today. We clambered on the granite boulders, where the famous lighthouse sits atop. We plunked ourselves down near the water, but not too close as the waves were big and we’ve heard that people get washed away every year. I can totally believe it as I witnessed people leaping from boulder to boulder, some of which the waves crash onto. One guy didn’t even realize this until he looked back after jumping away just as a wave hit the spot he was on. I was wondering how he didn’t clue in as the boulder was wet. I also watched nervously as a father with a baby strapped to his chest, and a toddler on his shoulders did the same thing.

Hubby and I sat patiently, hoping the sun would burn through the fog, but it didn’t seem to be the case. We decided to walk through the picturesque little community (population 35), and ended up at the Sou’wester Restaurant for lunch. After lunch, it seemed like the sun was trying hard to make an appearance, but I guess today just wasn’t meant to be at Peggy’s Cove for us. Perhaps another day.

Here are a few pictures – click image to enlarge with description. You can click the image again to enlarge a little bit more. The back button will bring you back to this page. 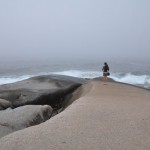 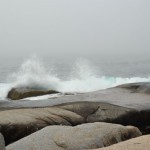 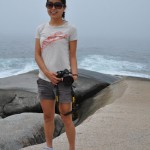 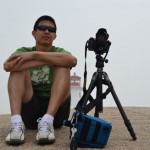 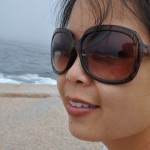 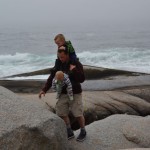 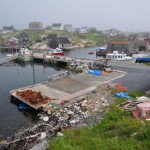 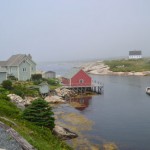 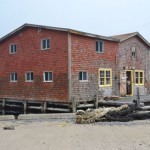