It’s a beautiful, sunny afternoon in Puerto Piramides. We’re sitting on our beachfront patio at Las Restingas watching the boats go in and out for the whale tours. We registered this afternoon for the sunset whale tour with Southern Spirit. 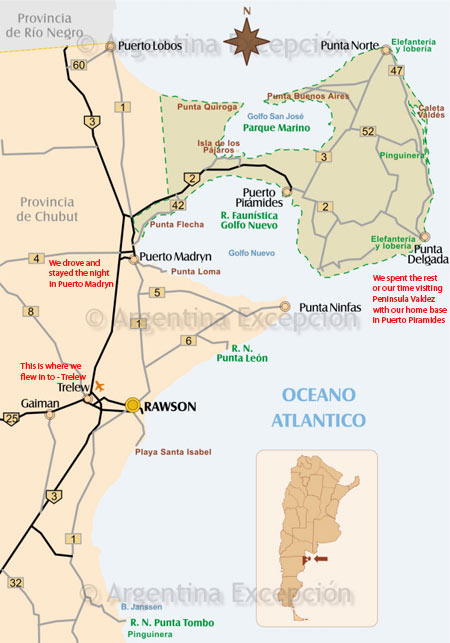 Last night, after an amazing day, we hit the sack early. I wasn’t feeling great probably because I was dehydrated and I was like a strip of crispy bacon. I had forgotten to apply sunscreen when we left early in the morning from Puerto Madryn to Península Valdés (click this link for informative map). By the time we arrived at the park, the sun was high, but I was too excited to remember the sunscreen. We saw Guanacos, penguins, roadrunner-type birds, patagonia sheep, elephant seals, sea lions, beautiful horses and even a snake! We were racing around the peninsula to try to get to the key spots during high tide to try to spot the orcas. When I say racing, I’m talking no more than 60km/hr since we are driving on gravel, and we also had to be able to stop quickly for the animals that were crosing the road. The biggest scare we had was when we thought we had run over a snake. Nelson slammed on the brakes and did a u-turn to check on the snake. What a relief, it had slithered over to the side of the road and was unharmed. We parked and decided to take some photos. I was scared to get out because I don’t know my snakes and had no idea if this one was poisonous or not. Nelson clearly was less worried and got down low and kinda close to take the shots. As if that wasn’t brave enough, he decided to touch the damn thing. Then I decided to take some photos, but nearly fell over backwards. I was crouched down and all of a sudden the snake shot towards me, mouth open and fangs out. It drew back just as quickly, but let me tell you, it made me jump. I don’t think it was actually feeling threatened by me – we think it was trying to catch bugs because even after we backed away and got into our truck, it was still doing those hunting-like moves.

The drive around the peninsula  takes about 5 hours. We didn’t go down to the south side as the main lookout area is currently closed, so we stayed in the mid and north parts. The drive along the coast is beautiful – the water is a gorgeous shade of blue/green and there wasn’t a cloud in the sky. By the time we got back into town, we were famished. We had had breakfast really early that morning in Puerto Madryn and had bought water and two bags of chips to snack on. We got back around 6pm, but dinner in Argentina doesn’t noramlly start until 8 and we were now off schedule. Luckily, we found a little coffee shop by the beach that offered sandwhiches and played a Jack Johnson CD which was comforting. After devouring my patagonia lamb sandwhich, we head to a recommended lookout point just 5km from town to watch the sunset. And how lucky were we?! We managed to see whales! Between the both of us, I was the one that snapped the photo of the whale tail, but Nelson got every one of the beautiful sunset shots. It was a the perfect way to end the day. And then we got back to our hotel where I saw what had happened to me that day. My shoulders, neck, chest, back, arms and backs of my legs were burnt. I felt hot and cold at the same time (I was basically cooking from the inside), so after a hot shower, I crawled into bed. Nelson did the same and I kid you not, within 10 seconds, he was out. We had fallen asleep for a little while and when we both woke, we tried to decide if we should get dinner (it’s 10:30 at this point), but I wasn’t feeling great and just wanted soup but we had no idea where and if any of the restaurants in this town served soup. So we made the executive decision to brush our teeth and just go to bed. Thanks babe, for doing all that driving today! I’m so glad I got to share all those memorable moments with you.

Today, unlike the last couple of days, we didn’t wake up super early. I think the alarm went off at 8:30, we had breakfast and then did the long drive back to the North Point (Punta Norte) to try to catch a glimpse of the orcas during high tide. We stayed for a while and watched the silly antics of the seals and sea lions, but with great disappointment, we did not see any orcas. I now can see the difference between seals and sea lions and I also now understand why they are called sea LIONs. Using those huge, public binoculars that are anchored in the ground, Nelson pointed out the big, furry mane around the sea lion’s head. And when he starts getting aggressive, the thing can really roar. The seals on the other hand don’t look fluffy and they have those huge, sweet eyes. Some of them even ‘walk’ around versus doing ‘the worm’. Today, we both slathered on copious amounts of sunscreen and I wore my sunhat. It was the type of day that could really burn you because the perfect ocean breeze kept you cool.

We got back into town shortly after 2pm, which was prime lunch hour so we’re back on the Argentina eating schedule. We dined at our hotel since it’s one of the few places that actually have an ocean view. It was so relaxing sitting there with a glass of wine. I had the spaghetti with a cream cheese and leeks sauce and Nelson ordered the arugula, blue cheese and procuitto risotto, with a bottle of Quilme stout. His dish was very salty and I actually don’t think there was any arugula. My dish lacked salt, so to balance things out, we both ate half of our dishes and then switched.

Apparently this town is known for seafood. Back in Iguazu, we had seafood risotto, but we were warned by a doctor back home to avoid shellfish. When we had enquired about the seafood risotto originally, the waiter listed everything but the clams. I picked them out. Anyway, that happened in Iguazu. And the staying away from shellfish thing is probably a bit overly-paranoid anyway. Although they are known for their white salmon here, I’ve actually taken a liking to their patagonia lamb (but not so much for patagonian sauvignon blanc). The sauv here does not have quite as much depth as what I am accustomed to in a sauv blanc. It’s not bad, but it’s just a dry, light white.

As I sit here, it feels a little bit unreal. I would have never have guessed that in patagonia (ok, we’re in the northern part), it could be this warm – high 20s. When I look out onto the beach, I can see people in the water. It’s amazing. I need to get ready for the whale tour now.

I left this video until the end because it’s embarrassing for me, but I wanted to preserve the memory. I was so shocked when I heard the cowbell.