Hubby and I went to the restaurant Earth on Bloor West tonight.  The food was very good, but sadly, we probably will not visit again.  They do have another location, in Rosedale, but service at the Bloor West location left a lot to be desired.

We arrived at 8:00 p.m. and were seated promptly.  The restaurant was not full.  Our waiter brought us water as we perused through the menu and wine list.  We both ordered a 5oz glass of a Chianti ($13 per glass).  To start, I had their composed beets, which included red quinoa, crispy kale and Best Baa sheep yogurt ($12).  The dish left me wanting more.  The beets were the perfect tenderness, and I enjoyed the nuttiness of the red quinoa.  The little dashes of sheep yogurt was especially good with the red beets, which were marinated in something acidic (like pickled, but it wasn’t pickled).  It was good, but the yogurt was a good pairing.  I love kale, but this time it was only ok.  Perhaps a dash of sea salt would have been nice. 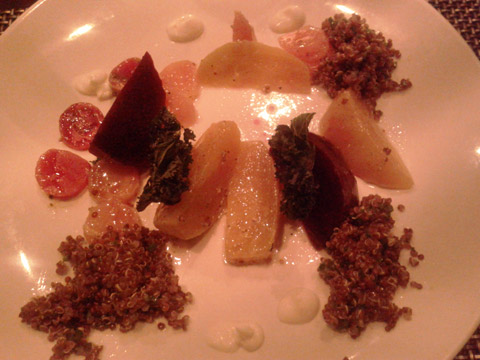 Hubby had the smoked fish chowder with haddock, trout and red fife crouton ($10-$12), which he very much enjoyed.  The flavour and texture was very well done.  Note that when they brought his chowder, they did not provide a spoon.  We had to request.

After the apps, we sat there for a very long time.  I expected them to provide bread, but nothing came.  Our waiter did not even come by to reassure us that the food was on its way.  We sat there for what seemed like an eternity.  About 1 hour and 15 minutes after being seated, our waiter returned with our mains.

We ordered the 8oz ribeye, which is dry-aged from Wellington County and is $2.99 per oz.  It came with a mustered horseradish and they cooked it medium-rare (as requested).  It was was a fantastic steak. 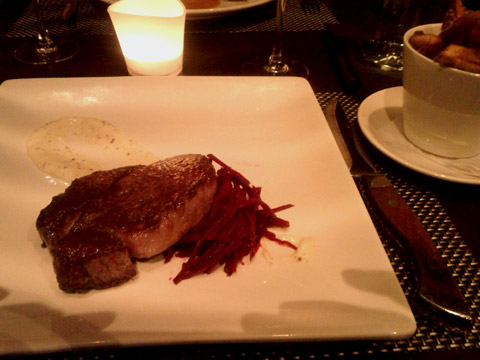 I had the Portuguese chicken, which came on top of collards, with paprika corn bread and piri piri ($21-22).  It too was a lovely dish.  The chicken was moist and flavour-packed, with a hint of heat.  I liked the piri piri sauce, though I admit that I don’t have it often enough to be able to make any comparisons.  The cornbread worked well with the chicken.  The collard greens were only ok.  I finished everything on my plate, minus the lemon. 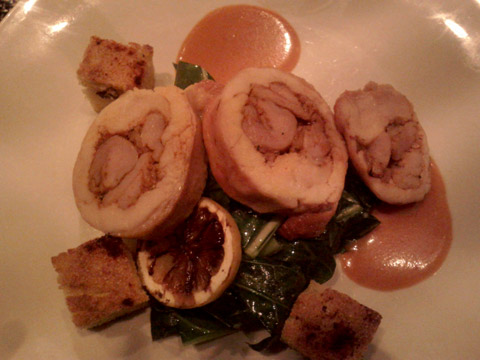 After a delicious meal like this, we’ll usually have a cup of coffee, but we didn’t want to sit here for another hour, so we asked for the bill.  That came promptly, but our waiter did not bring us the credit card machine promptly.  In fact, we got tired of waiting, so we counted up what cash we had, left a terrible tip, and walked out.  We agreed that even though the food was delicious, it was not worth waiting that long.  It may have helped a wee bit had they provided us with some bread – we were famished.  What had us scratching our heads was that the restaurant was not even half full.  Hubby wonders if our waiter was completely new because he couldn’t even remember what was in the one dish (Canada’s finest plate), which only had 3 ingredients, he did not bring a spoon for the soup, and he had originally given hubby a non-steak knife for his ribeye.  The table next to us had to ask him for ketchup twice.

Perhaps this was just an off night.  I don’t want to be responsible for anyone fainting from the slowest possible service, but as I said, the food is great.  I would have been more understanding had the restaurant been full.  If you do decide to check it out, maybe order a few appetizers.  Or maybe if you skip the apps and just order the main, it might come out faster?  Bring some snacks just in case.