It was a magnificent day yesterday – full sun and warm. Ok, it was quite hot. With the humidex, I think the weather people said it felt like 31 degrees Celsius. The previous weekend, we had biked 75km and other than my fingers and toes getting a little chilled during the last 15km, it was a fairly easy ride. Yesterday, we cycled in Welland, Ontario. The route was a little over 83km, but by the 55km mark, my body was starting to feel worn down even though I was making an effort to stay hydrated. Hubby says it was because of the relentless heat and the sun beating down on us the entire time. Luckily we did bring a gatorade with us in addition to each of us with our water bottles. We were very sweaty.

The Friendship Trail was definitely a nice/well maintained 24.5km trail. It was also along here that we had short stretches of shade. It wasn’t very busy either, which was nice, though by the time we reached the trail, we were going at a slower pace. We even stopped and sat on one of the benches to eat some beef jerky. I was craving salt. With just under 8km left on our ride along the water, we found an ice-cream truck and I stopped to buy a raspberry slushy. I still haven’t figured out why raspberry flavoured drinks are blue, but my tongue matched my shirt after a few sips. I also suffered some serious brain freeze. 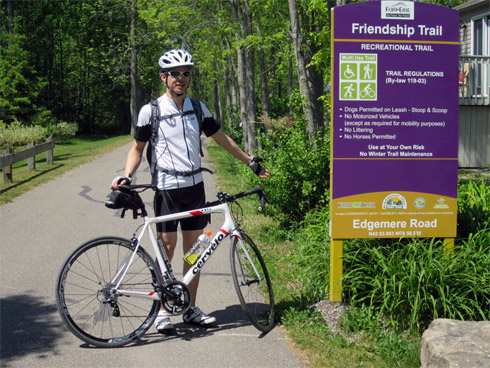 After our ride, I told hubby I wanted to check out Sushi Eight in town. He was hesitant, but I insisted. It turned out to be a pretty decent all-you-can-eat sushi joint. Dinner is $21.95 per adult. We ordered 12 pieces of salmon sashimi, 12 pieces of white tuna sashimi, 6 pieces of mackerel sashimi, 6-piece spicy tuna roll, 10 piece spider roll, 2 salads, 3-piece shrimp tempura, 2 small bowls of vegetable udon, 1 bowl miso soup and a bowl of edamame. For desert, we had a fried banana and a green tea ice-cream. For $1.50 each, we both had iced-tea with free refills (2 cans each). So I think we ate our $40 worth of sushi. The fish was fresh and the restaurant was clean and it got busy by the time we left. My only complaint was that it took half an hour for the shrimp tempura to come out. Basically, it came out with the fried banana, so they must have been backed up with the deep fryer. 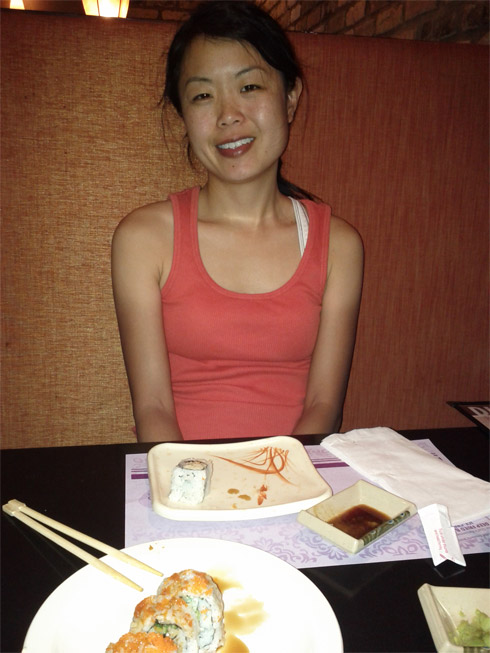 We were so exhausted after the ride. I told hubby that we still needed groceries since the super-markets would be closed on Monday for the long weekend. Since there was a Zehrs next to the restaurant, we stopped in to pick up stuff that wasn’t meat, dairy or frozen. I’ve never been inside of a Zehrs before, nor am I sure I’ve heard of it, but it’s pretty much a Loblaws. In fact, it’s owned by Loblaw’s. The store we went into was big, and it had a Joe Fresh attached. We picked up fruits and veggies. On the drive home, I could see that hubby was really tired. His eyelids looked kind of heavy so I talked his ear off to keep him awake for the hour-long drive back home. We showered and no joking, we passed out before midnight. We slept straight until his alarm clock went off. He asked me how my body was feeling and I told him that my left hip flexor was a little sore, but otherwise, every other part of my body was fine. So up we got and within 15 minutes of getting out of bed, we were on our city bikes and off to Mt. Pleasant Cemetery to pay our respects to my grandparents. It was another gorgeous day, but we left the house at 9:30 so the sun wasn’t as strong. I was still a bit sweaty because there were hills to climb, and I was the mule – I carried all our stuff in the panniers.