We arrived in California this afternoon. First stop, late lunch at the Q in the Richmond district. This place was showcased on Diners, Drive-ins and Dives on the Food Network. It wasn’t memorable, but we were famished so we could’ve eaten anything. My fried chicken was dry and hubby’s pulled pork could use more flavour.

No visit to San Fran is complete without a stop at the wharf. This time we parked kitty corner to the parking garage as it was cheaper – I think $15 flat rate(?). We walked over to Blazing Saddles and rented a tandem bicycle. It was later in the afternoon and the rental stand closes at 8PM. You can do a late drop off, but we didn’t want to deal with the hassle of it, so our ride took us part way over the Golden Gate Bridge before we turned back. It was approximately at 15km ride for us. With more time, you could ride across to Sausalito or even Tiburon. In both cases, you can then catch the ferry back to the wharf. 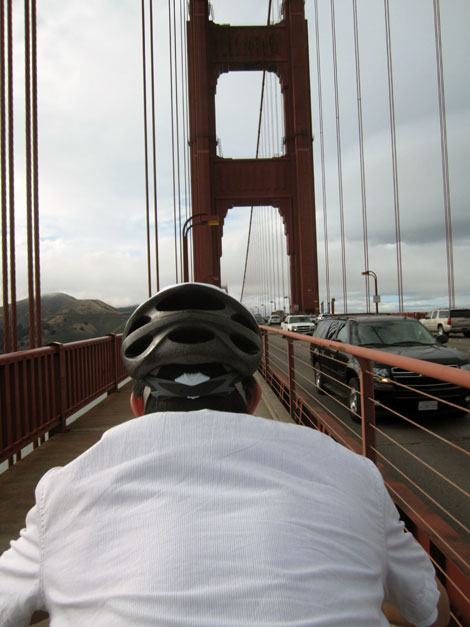 It’s quite an experience riding a tandem bike. You should only do it with someone you trust and like because it requires team work to successfully manoeuvre this thing. I was sitting at the back so the trickiest part for me was not being able to see in front of me. Also, it was difficult to hear what hubby was saying to me. Apparently he would be saying, “coast!” but I would still be peddling like crazy. For turns, you both need to lean into the turns together. And most importantly, front rider should always mount first so back rider doesn’t accidentally get a round-house kick to the head (that never happened in our case).