Yesterday was one of those go-go-go days. Thankfully, it was the end of daylight savings time and we managed to gain an extra hour of sleep, though to be honest, I ended up passing out earlier than usual.

Our morning started with a hearty breakfast at home before heading out to the East York Curling Club for a fun bonspiel through U of T. A friend from Arup had invited us to play. He’s a super sweeper. Micah was also invited to play and he was our skip as usual. The ice was not what we were used to (very straight) so it took us a while to adjust. Unfortunately we did not win, but it was definitely an excellent experience for us to play on different ice. As hubby describes it, we had our asses handed to us by the first team. In our defence, two of the guys on the opposite team had been curling for 10 years. We managed to win our second game and we tied our third. I thought it was a great, well-organized bonspiel.

We hurried home and had 9 minutes to get ready for dinner. That’s not enough time for me! But hubby ushered me out the door in 11 minutes and we were headed downtown to GwaiLo Pop Up restaurant at the Metropolitan SoHo hotel. We met the chef, Nick Liu, at Soupstock and learned about his pop-up endeavour then. The restaurant is opened from Thursdays to Saturdays for the month of November only. It’s a $75pp tasting menu. They offer wine pairing for an additional $45pp, which we opted out of because we still had other plans that evening, but we decided to try a cocktail. They try to pair their cocktails with the dishes they are offering. I decided to try the Normandier cocktail, which was apple-cider based. It was nice, but I liked hubby’s better so I eventually ordered one of those. He had the Gov. Dawsonne, which included ginger and jalapeño. It had such a nice kick! Unfortunately, when I got mine, it wasn’t as spicy and we think one of the other customers ruined it for everyone because he had sent it back likely because it was too spicy.

The amuse was a taco (lettuce wrap cut in the shape of a circle) with a home made pickled green tomato and shrimp salad. I loved it, and it made me think I should consider growing green tomatoes next summer. 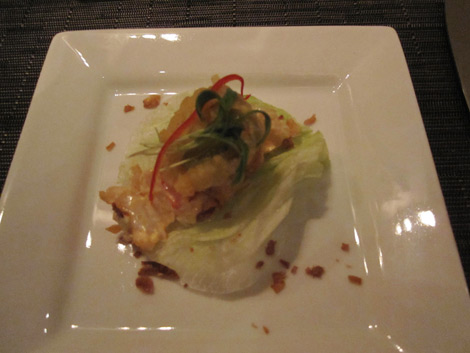 General Tso’s Sweetbreads was a dish of jellyfish slaw, scallion, chili and coriander. I don’t think I’ve ever had General Tso anything before. The sauce is a bit sweet. Hubby felt it had too much sauce and he was not impressed that he only got one piece of jellyfish. The slaw was very good and not over-dressed. I liked it, but they didn’t skimp as much on the jellyfish for me. 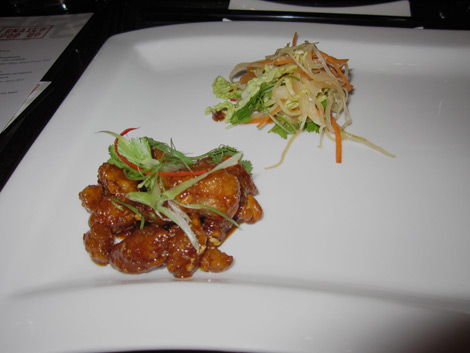 Th Japanese Bolognese consisted off beef tatki, handmade soba, tomato consommé, parmigiano, mushroom crisp, basil and truffle pearls. Hubby loved this dish and believes that if they sold a big bowl of this, it would be popular. My issue with it was that it wasn’t warm enough, but the tomato consommé was a nice change for a noodle broth and I loved the truffle flavour. I would have given it 5 stars if it was warm. The beef for me could also have been seasoned a little more. 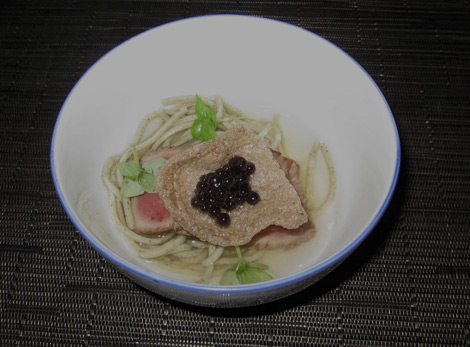 Seared Scallop with smoked cherry tomato, honey mushroom, pickled carrot, basil and tom yum beurre blanc could easily have been one of my favourite dishes. The tom yum beurre blanc was so delirious that I lapped it up. The smoked tomato added an extra complexity to the dish and I would like to find honey mushrooms to cook at home. The scallops were seared perfectly. This was a heavenly dish. 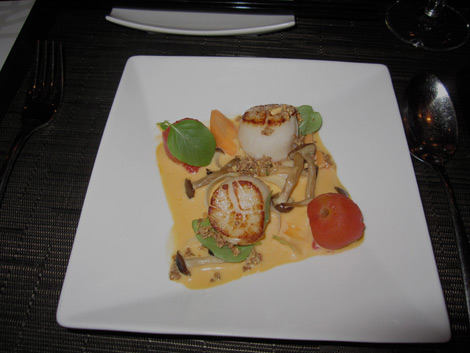 The Braised Korean Short Rib dish with kimchi pommes purée, asian pear bbq sauce and panko egg yolk proved to be a great dish too. The short rib was fork tender and the panko egg yolk was delightful. When you cut into it, the yolk is still runny. The crunch from the panko gave it a nice crunch. Kimchi pommes purée was an interesting move away from the regular mashed potatoes. I liked it. 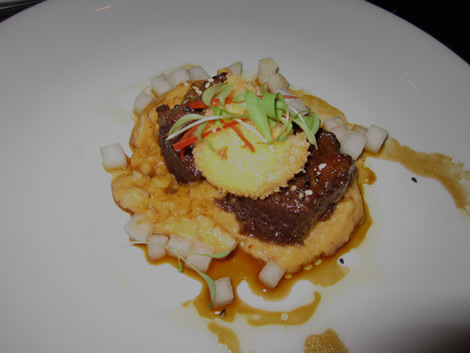 Ginger Consommé with fennel geleé, goji berry and mint oil did nothing for us. The flavours were too muted and the geleé didn’t really taste like anything. It was more like a gelatin cube. 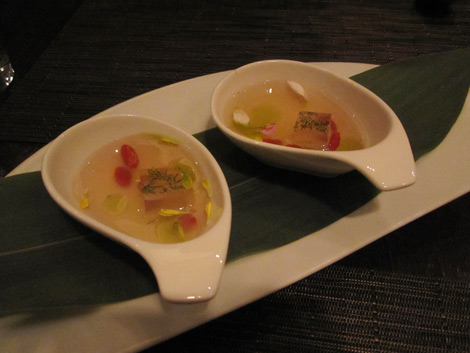 Shochu Poached Pear with peking duck brittle, elderberries, and star anise chantilly was ok. It is hard to judge deserts since I don’t really order them. I found the elderberries a little bitter, but maybe that’s what elderberries are supposed to taste like. I definitely preferred the desert from Richmond Station better. 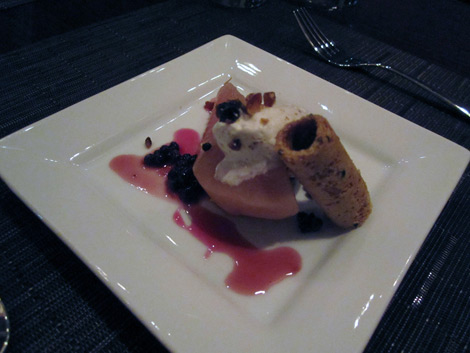 I think the $75 is over-priced (they automatically add 18% gratuity to that, but that’s made known on their website and as you are making your reservation). The portion size is small. It would have been nice if the main course (braised short ribs) was a little bigger. The service was excellent but the food didn’t blow our socks off.

The staff managed to get us out on time so that we could briskly walk over to Roy Thomson Hall to see La vida breve: A Spanish Opera. I wanted to go to catch the TSO, but I knew that hubby who liked classical music, doesn’t get why one would watch a symphony, so instead I got us tickets to see an opera. It was interesting and beautiful. It wasn’t a full-stage production. The musicians were on stage and at the front, the opera singers would stand and sing. The choir sat in the upper balcony above the stage. What made this performance unique was that the conductor, singers and flamenco dancer were all from Spain. The main singer, Nancy Fabiola Herrera, had a beautiful voice. As they were singing in Spanish, we could not understand, but they had supertitles which helped a lot. Hubby didn’t love it because he felt the character development was weak. Of course it was, since it wasn’t a full production. I told him that we need to see a full production. I’m not sure what it is about opera music, but the voices draw me in. They are hauntingly beautiful.