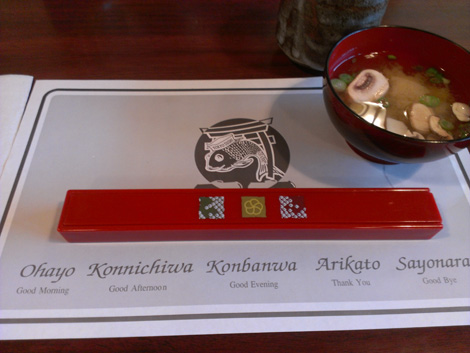 Hubby and I received a flyer recently from a new sushi restaurant on the Queensway. It’s not exactly a convenient location for most, but we are always on the look out for sushi restaurants with good quality fish at affordable prices. Some of the places we have found that fit the description include Sapporo Sushi in North York, Seoul House in Mississauga (though I would recommend this place more for their bibimbap) and Sushi Ya Japan by the airport. The fish at each of these places are consistently fresh and the pricing is reasonable. I’d stay away from Sushi 2 Go as the pricing is high for what you get. Sushi Dragon by the airport is so-so with super slow service. Both times we were there, we had wondered if the staff had left. We couldn’t find any body to get our bill. If you are feeling adventurous and have some extra money to spend, give Sushi Kaji a try. Sushi One in North York is ok too, though I have only ever had their rolls, and I mainly ordered as take-out because during the lunch hour rush, the small little restaurant gets filled up quickly. It’s easier to call in your order for pick-up.

But today is about Tokyo Sushi on the Queensway at Royal York Road. Their website hasn’t been updated to include this new location. It’s a welcome addition to the Queensway strip. I give them bonus points for providing non-disposable chopsticks in cute little chopstick holder boxes, and their radio selection – CBC radio one. 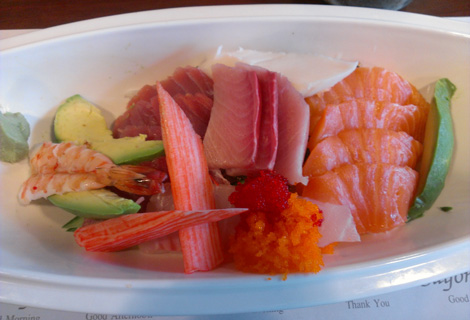 We both ordered the Chirashi Sushi Lunch ($12.95). It was about 16 or 17 pieces and it was fresh. With the meal came the standard miso soup and the salad. They got the salad dressing right. Some places tend to make the dressing too sweet (Sushi Dragon). The fish was cut a little thinner than at say Sapporo Sushi, but not a deal breaker. Unlike the other places we frequent, this place does not offer other free appetizers or green tea ice-cream at the end. Again, that won’t deter us from visiting again. Service was prompt and friendly. The sushi chef is clearly enjoying himself as his hums to himself. If you happen to be in the neighbourhood and have a craving for sushi, I’d recommend you give this place a try. There is paid street parking on the Queensway right in front of the restaurant, and paid parking behind and on Dayton Avenue.

The next dish I try will be the beef udon. Not many of the places we’ve visited offer beef udon.

As the restaurant just opened, I don’t think reservations are necessary. As I mentioned, there are not a lot of great dining establishments on the Queensway yet, so hopefully this is the start of better things to come.