If you live in a cold climate and don’t own a greenhouse or have the space for a cold frame, that doesn’t have to stop you from growing edibles. Last week I decided to try my hand at microgreens. What are microgreens? They are a tiny form of young edible greens that are harvested while tiny, tender, and tasty.

Do not confuse microgreens with sprouts. Sprouts are germinated or partially germinated seeds. A sprout consists of the seed, root, stem and pale, underdeveloped leaves. Sprout seed is not actually planted, instead, sprouts are produced in water. Some people grow sprouts in a jar. I have tried this in the past, but have ended up with a mouldy mess. Growing Microgreens, unlike growing sprouts in water, requires a small amount of soil so the tiny roots can take hold and the plants allowed to grow upright.

To grow microgreens, I used a greenhouse tray, which are relatively inexpensive and can be purchased from any garden centre. You can purchase just the tray without a lid, but the one I have comes with a lid, which helps keep your seeds and young plants warm. I had a bag of sphagnum peat moss at home, and some potting soil, so I mixed the two in the tray and moistened using a spray bottle. I filled the tray with about an inch of this growing material and then I sprinkled seeds on top. For my first crop, I decided on mustard greens and broccoli. After laying down the seeds, I covered the soil with moist paper towels and placed the plastic cover back onto the tray and set it by a window. 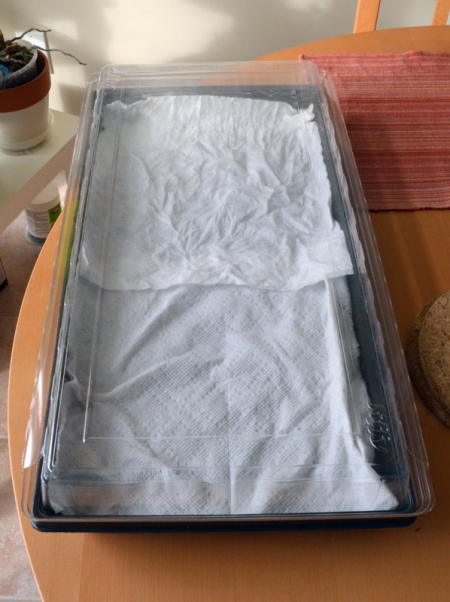 The next day, I noticed some annoying little soil gnats. I think they were in the bag of soil I had. They are not at all harmful to your plants. They are simply annoying. In the summer, I sometimes use the yellow sticky tape to deal with them, but this time I simply took the tray outside and opened the lid. During the day, I will usually remove the lid to prevent the chance of mould growth in the tray. Ensure the paper towels never dry out. I keep the tray in a sunny location. In the evenings, I replace the lid.

After 4 days or so, I noticed that the paper towel on one side of the tray was domed, so I decided to see what was happening beneath. To my delight, my seeds had germinated! The mustard greens had come up fast and strong. The broccoli had also germinated, but were not as tall. Be gentle when removing the paper towels as your plants will be tiny and delicate and you don’t want to rip out any of the plants. 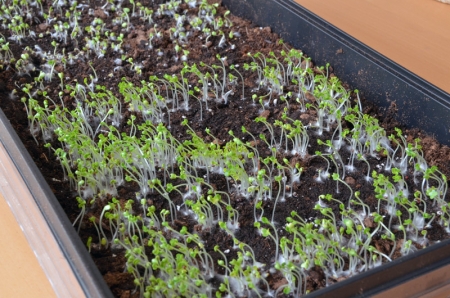 I will admit that even though I was so excited about the growth, my heart dropped when I saw all the white fuzzies. I thought it was mould. But it looked different somehow, so I decided to do some research. Turns out that they are root hairs! These root hairs are usually only visible when the sprout is at it’s driest and are generally only visible on certain plants – brassicas and grains. 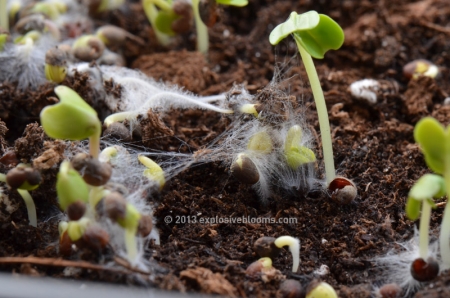 According to wikipedia, the typical stem and leaf configuration for micro greens is at about 1” to 1½” in height, and ½” to 1“ in width across the top and includes the stem, cotyledon leaves and one set of very small, partially developed true leaves. The average crop-time for most microgreens is 7-14 days from seeding to harvest.

I harvested some last night and put them in a zip lock and stored in the fridge. To harvest, grab small clusters of the crop and cut just above the soil line. Some seed instructions suggest harvesting before the true leaves develop; follow specific seed packet instructions for each type of microgreen crop. 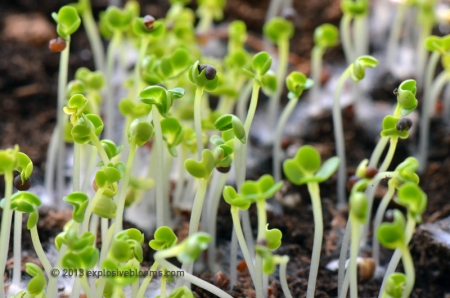 Today, hubby made us a bacon, egg, tomato and turkey sandwich on cheese bread. I added some of the mustard greens harvested from last night. The flavour is very mild, unlike the broccoli microgreens, which smells and tastes like broccoli. 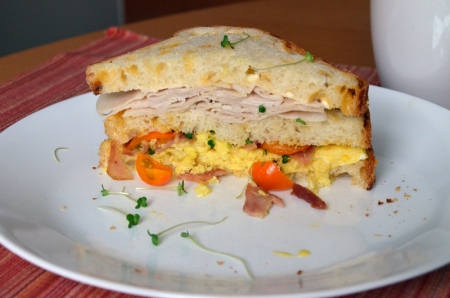