This past weekend was the Doors Open weekend. This year’s theme was entitled ‘Creators, Makers and Innovators’ and featured many older buildings that have been redesigned, re-invented and re-purposed into modern 21st century spaces that host collaborative teams of imaginative people who are creating new ways of thinking, making and doing.

Our timing was much tighter this year, so we tried to keep our choices geographically closer together since we were travelling by bicycle.

First stop was Liberty Grand Entertainment Complex because I’ve seen red carpets and people all dressed up walking into this building. 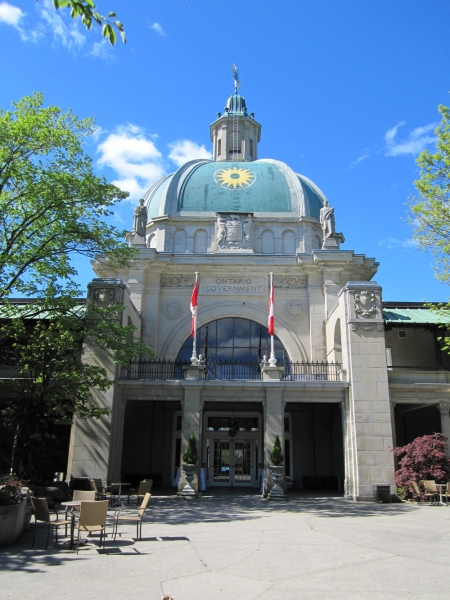 The Liberty Entertainment Group took over the property in 2001 and completed extensive renovations and restored the building to its original grandeur. The Liberty Grand Entertainment Complex now hosts over 450 events per year. With crystal chandeliers, 27ft. ceilings, iron laced balconies and arched windows,the 100,000 square foot space exudes a luxurious feel of understated elegance.

Our next stop was much more interesting, but we had to ride fast to get to the location in time for the tour. There were only 2 tours and luckily, we managed to snag the final 2 spots for the 11 am tour. This was the Queens Quay Revitalization  Behind the Construction Fence walking tour. Of course this stop was of interest to us because it has been affecting our cycling route.

Construction is well under way on a $110 million revitalization project designed to transform Queens Quay – Toronto’s main waterfront street – into a world-class boulevard. Stretching 1.7km, from just west of Lower Spadina Avenue to just east of Bay Street, construction crews are completely rebuilding and revitalizing the area both above and below ground.
Based on a design by award-winning landscape architects, West 8 + DTAH, Queens Quay is becoming a waterfront showpiece and a must-see Toronto destination. Completed by 2015, a generous granite pedestrian promenade and off-street Martin Goodman Trail will create much-needed public space by the lake. A new streetcar corridor and traffic lanes with improved turning lanes and signal timing will improve traffic flow. New granite sidewalks and landscaping improvements will stimulate ground floor retail activity and urban vitality. Tour leader: Pina Mallozzi, Planning and Design Manager at Waterfront Toronto.

We had the opportunity to visit the construction trailer where we met the team, saw plans for Queens Quay and had learned more about how this massive project is being built. The tour continued behind the construction fencing where we experienced some of the major activities such as the rebuild of the TTC corridor, construction of underground utilities and municipal services. They also highlighted work above ground where hundreds of trees will be planted using new silva cell technology which should extend tree life from the standard 7 years to 25-50 years (species: London Plane Tree – used because they are good at absorbing dust); 2.5 million pieces of granite will be hand laid; and a new roadway and connection to the Martin Goodman Trail will be built.

This has been the first time we’ve received a free BBQ lunch during Doors Open. What made it really cool was that we were essentially having a picnic under the highway. It’s not everyday that this happens for me. The burgers were really good too – not the little skimpy patties. It was a great way to refuel and continue on. 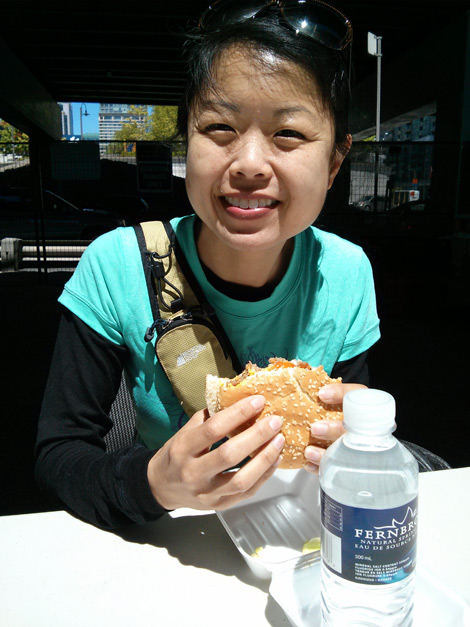 Our final stop for the day was 401 Richmond Street West, mainly because I wanted to see the rooftop garden.

401 Richmond Street West is a heritage-designated industrial building that was originally constructed for the Macdonald Manufacturing Company from 1899 – 1923. The building operated as a tin factory best known for it’s lithographic work. That artistic lineage is echoed today in the building’s community of over 140 artists, cultural producers, and micro-enterprises. The original character and architectural features of the building have been preserved (including over 800 double-hung wood and metal frame windows) with the addition of modern renovations and green elements like a 10,000 square foot roof garden and interior courtyard. 401 Richmond was the recipient of an Award of Merit for adaptive re-use of a historic building by Heritage Toronto in 1999 and a Green Toronto award in 2008 for the spectacular roof garden.

We stopped at MEC afterwards, and due to the Queens Quay revitalization, Spadina streetcars turn on Adelaide and down Charlotte before looping back up to Spadina Station. I have never seen an entire line of streetcars on Charlotte before – it was an interesting site and I wished I had my DSLR and a wide angle lens. 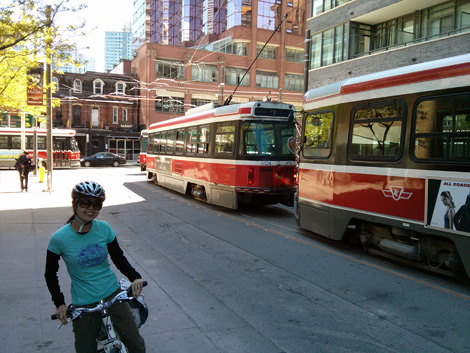 We attempted to capture the line of streetcars, but this panoramic has bent the photo. It’s still interesting nonetheless.

On Sunday, we visited the Toronto Police Service 11 Division on Davenport Road. The new 11 Division was officially opened on October 28th, 2011. It was built on the site of the historic 1914 Carlton Village Public School, and has preserved much of the character of the old school. The new station is the first Leadership in Energy and Environmental Design (LEED) Silver accredited police station in Toronto.

In addition to seeing the cells, which were emptied for Doors Open, we were given a demo on lifting prints. We also saw the interrogation rooms, which are so different from what you see on American TV. I had to ask why there were no 2-way mirrors in the interrogation rooms. Apparently they are not very popular any more, especially with technological advancements.