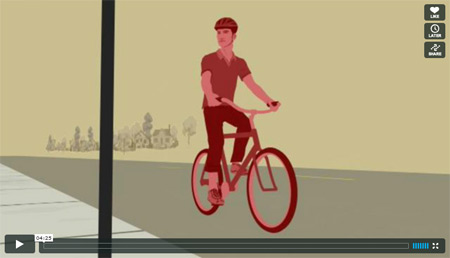 On the topic of stop signs at intersections…

Drivers think cyclists are unpredictable, but lately drivers have been behaving unpredictably at stop signs. As demonstrated in the video, I am scanning the intersection as much as possible as I am approaching. If I see a car approaching from another direction and it seems like we could arrive at the same time, I will always slow down so that they will arrive first. And when I then arrive, I will make a complete stop, foot on the ground. Why? It’s the law here, but I also do it to avoid confusion. The driver is expected to know that they clearly arrived first and therefore they can move first. So why is it that the girl in this situation, who was simply going through the intersection, decided not to move? She arrived first. I’m patiently waiting and she tentatively rolls forward and now her nose is in the intersection. I still have a foot on the ground. She stops and she’s staring at me. I’m irritated. What is she waiting for? Let me tell you – she’s on her freakin’ phone! What happened to the law about hand held devices, lady?!

Or what about the time when there are 2 vehicles already at the intersection and I approach last. The car that arrived first moves just as I’m approaching. A car then pulls up to where that first car was. The car on the opposite side should be moving by now, but he’s staring at me. My foot is on the ground because I have stopped, obeying traffic laws. I am watching him so that I know when it’s my turn. I have not made any move yet. He’s still watching me. Time passes, and I’m fed up and under the impression that he wants me to go, so I get going. He decides to get going too, so I quickly stop, and he stops. We’re now both in the intersection. I want to throw my hands up and indicate, “what the hell, buddy?”

Drivers of the city, please stop being so unpredictable! If I had been a driver in a car in that same scenario, you would not have hesitated to go first. You would be angry if I had gone first. I try not give drivers reason to doubt my actions. I actually do follow traffic rules because I don’t want to get hit by a car/truck/streetcar. I respect drivers and the rules of the roads and all I am asking is that you (dear driver) do the same. Don’t change the rules because it causes a lot of confusion. If you have the right of way, just go, dammit!