We had a long weekend and one of the things hubby and I needed to accomplish was to prepare the “incubator” for our worm eggs. I have read that Red Wiggler worm eggs can stay dormant for 3 years in dry conditions, waiting for more favourable conditions. The eggs we collected are from our first batch of now deceased worms (the worm condo).

We could easily add the eggs to our exiting worm bin, but we want to see if we can actually get them to hatch. We’ve purchased a small Rubbermaid container to house the eggs. It is an 11L bin from Canadian Tire. 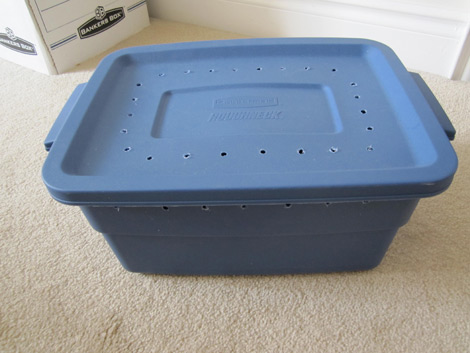 As usual, we drilled some holes on the lid and along the sides for air circulation. I did not have a fine enough sieve to separate the eggs from the vermi-compost, so I used a small spoon. I lined small take-out containers with damp paper towel for the eggs. What surprised us the most were the number of eggs in the bin. There had to be at least 100 eggs! The other surprising thing was finding live mites (?) at the bottom of bin. They were not fast and active like the mites in our current bin, but probably because there was a lot less decomposing matter in the worm condo for food source. 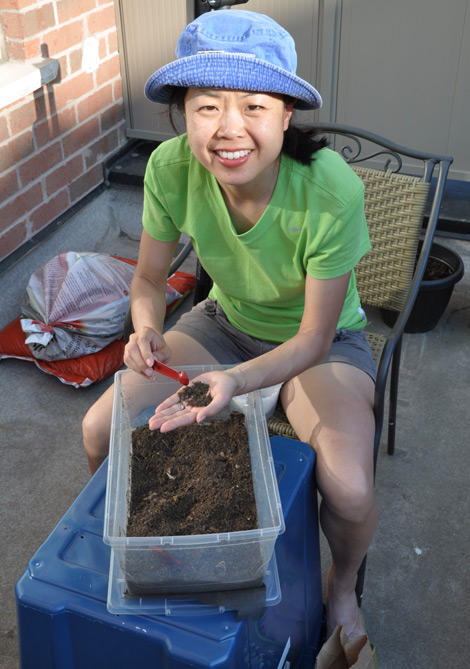 Picking out the eggs was a lot more work than anticipated, because of the sheer number of them. They can also blend in with the finished compost. You think you’ve found all of them in the one spot you’ve been sifting through, but as soon as you look down, there is one right in front of you. This task took a couple of hours. You had to be gentle so that you didn’t drop or crush any eggs. 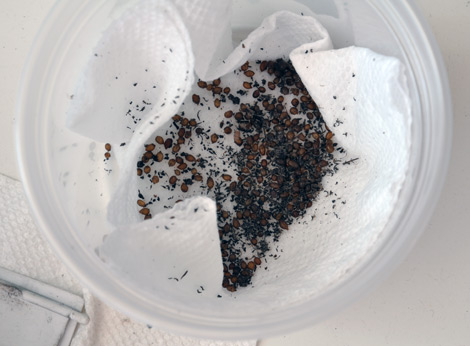 The cocoons are small, about the size of a match-head, and lemon-shaped, with one end having a little point. Each cocoon can contain as many as 20 eggs, but usually on 3 or 4 worms will emerge. The cocoon usually starts out as a pale yellow colour and will gradually darken to a reddish-brown when the hatchlings are ready to emerge. Based on the colour of the cocoons we picked out, I’m hoping that we will see some babies soon. We did all this on Monday, May 20. 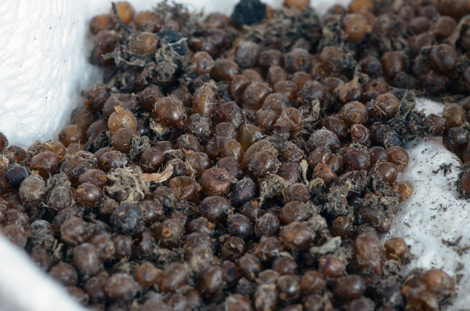 The bedding we have provided is mainly moist coir with some shredded newsprint and pieces of egg carton. We’ve placed the bin in a closet upstairs as it is quite warm in there. I’ve added one small piece of cantaloupe, in case some start to hatch. We want there to be a food source, and the melon will make it easier to see if there are worms. 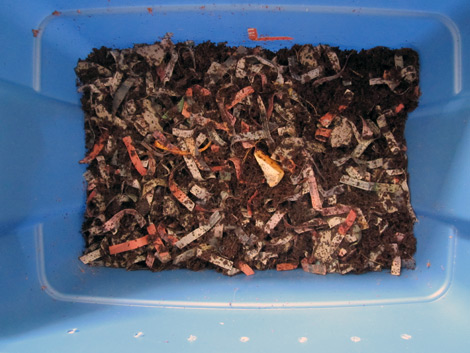 Baby worms are very small, about as thick as 4 human hairs. They are basically a tiny version of the adults, minus the clitellum (a light coloured band somewhere along their body – indicates the position of their reproductive organ). Baby worms also start of a little lighter in colour. We’ve seen them in our active bin, which has become a multi-generational bin in 2 short months.

Once the babies arrive, it will take between 60-90 days for them to become breeding age. If most of the cocoons hatch, we will definitely need a much larger bin.

In our active bin, I have noticed that the worms love cantaloupe and banana peel. They also like basil, but are not a big fan of parsnips. When we last checked on our bin a couple of nights ago, there were some interesting looking mushrooms growing. That fascinated and scared me, so we pulled them up (3-4) and I did some research. Fungi is normal. In fact, it’s not uncommon because mushrooms like to grow in high-carbon content and a worm bin has a lot of carbon.