On May 12, I had posted a picture of what the cold and windy day (Saturday, May 11) had done to my lemon cucumber seedling. Hubby had devised a splint for experimentation purposes.

I took his idea one step further and wrapped a ‘band-aid’ around the break to protect the wound.

It’s been a day short of a week since we’ve doctored this plant. We really didn’t put much hope into this little guy surviving, but so far he is turning us into believers! I was expecting him to slowly wilt and shrivel. As you can see in the next photo, the top was drooping a little that night we splinted him. 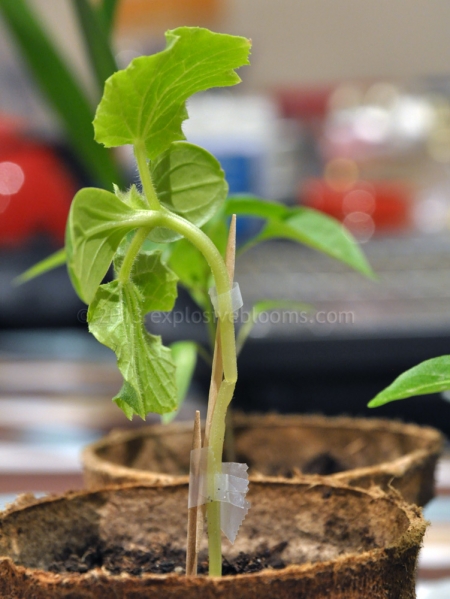 I’ve tried to take the photo from a similar angle, and as you can see, 6 days later, he’s managed to pull himself up! 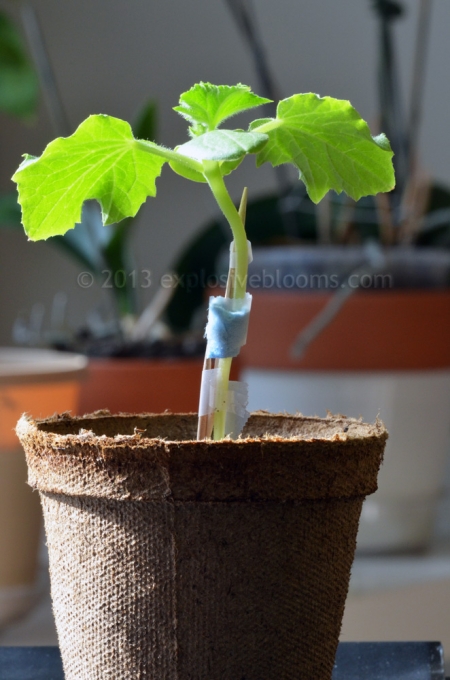 Not only that, but as you may recall, it had 4 leaves, with a small one coming in. This is the picture in the original post: 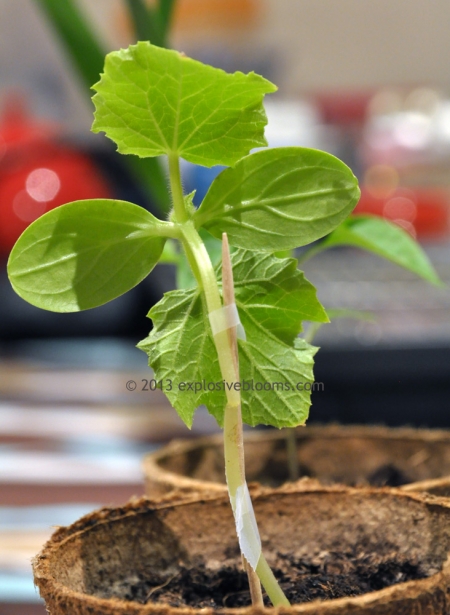 Today, that small leaf has grown and there is another baby leaf coming in. 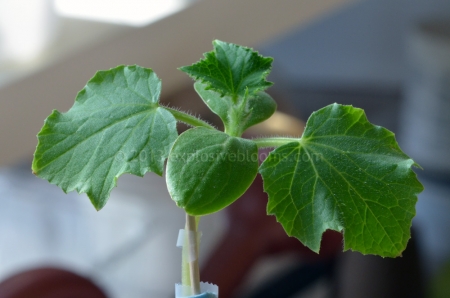 Hubby and I are more than surprised at this progress, and I am absolutely thrilled that this little guy has hung on and persevered. Each day that he is still alive amazes me. I continue to water him as necessary. I keep the band-aid dry, though I had considered misting it, but it was a toss up because I also feared that if it was moist, it could cause bacteria growth. I have not dared to undo the band-aid yet. I have also not put him outside again with the other seedlings to harden-off, however, he does get a nice sunny window spot.

In terms of growth spurt, I’d say that he’s actually keeping up with the undamaged cucumber plant. In fact, he’s got one more leaf over the other one. Cucumbers must be susceptible to cold weather because this morning I took the undamaged one out, like I normally do, but it was cooler this morning (maybe 9C), and after an hour, the leaves were a little limp. I brought it inside and shortly after noon, it had bounced back to normal. I gave it a little drink and put it back outside. The temperature had climbed, and the sun has been in-and-out of the clouds. I just checked on him (6:15 pm) and he’s fine. Clearly the cucumbers are not ready to be planted outdoors yet. I may wait another week or two as the forecast is predicting some cooler weather for next weekend – lows of 7C.