Last week I attended a Kombucha making workshop. Kombucha is a lightly effervescent fermented drink of sweetened tea.  It is thought to have originated in the Far East, probably China, and has been consumed there for at least two thousand years. The first recorded use of kombucha comes from China in 221 BC during the Tsin Dynasty. It was known as “The Tea of Immortality”.

Kombucha is a living drink, and by that I mean that it is brewed using a live culture which feeds off the sugar you add to your tea. The Kombucha culture looks and feels like a rubbery pancake, and it is normally beige in colour though our workshop instructor has seen them in various colours. This culture is a symbiotic colony of bacteria and yeasts (SCOBY) and is often referred to as “the mother”. You can grow your own SCOBY, but in my case, I was given a strong mother to start my first brew. 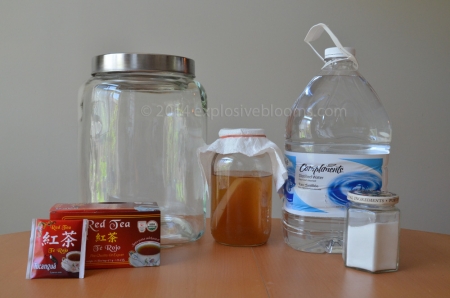 I initially stored my SCOBY in the fridge after I replaced the lid of the jar with a paper towel secured with an elastic. I did this to allow the SCOBY to breathe, and putting it in the fridge slows down so that I do not have to worry about feeding it right away. I wasn’t able to brew immediately because I needed a large brewing vessel, which I purchased from Tap Phong. For $10.99, I got an 8-10 litre glass vessel (the label did not actually state the size and I didn’t bother measuring). I was advised that my vessel should not be smaller than 6 litres.

Brewing kombucha does require real tea (camellia sinensis) for both minerals and nitrogen. You can read more about the types of teas that are commonly used and how they may affect the taste of your brew, and the health of your SCOBY. I decided on an organic red tea from Argentina. I’ve had some conflicting information in that one site claims that this is made from black tea, and another site saying that it’s 95% green tea and 5% chamomile. I’m less inclined to believe that there is any green tea in red tea. To be safe, I’ve added some Orange Pekoe, just in case this red tea is a roobios.

The hardest part of gathering everything together was getting the filtered water. There is a lot of information on the type of water that you should use, but my instructor had recommended filtered and without chlorine which could kill your SCOBY. I ended up buying distilled water from Sobey’s, after purchasing spring water from Loblaw’s. What’s the difference? Distilled water is more pure than spring water, and basically you want to start with the purist water you can get your hands on.

I used regular white sugar to sweeten my tea. I hadn’t even considered anything else, but it turns out I made a good choice because the white sugar is the most easily digestible by the SCOBY. When you brew kombucha, you are feeding your SCOBY and I have been advised that I will start to see the formation of a baby kombucha growing on top of the mother. You could continue to let the mother grow bigger and bigger, but I think the workshop instructors advised against that in case something goes wrong with a batch then at least you still have a safe original mother (?). From what I have read online, I could let my current SCOBY double in size before I split the daughter from the mother. It should split easily. I was told that the SCOBY I have will brew 4 litres.

Currently my SCOBY has some brown stringy stuff hanging off it. The instructors said that that is a sign of a healthy SCOBY. They are strands of yeast and represent an active SCOBY. Once my tea has cooled to room temperature, I will wash my hands with non-antibacterial soap and transfer my SCOBY into the tea. I will also use the starter liquid that she is currently stored in. This liquid should be the correct pH from the last batch.

My new batch should take around a week to brew. I will cover my vessel with a cloth and store it in my spare closet. Your brew should be kept out of direct light (you can throw a towel over it), it should be kept at around 23 degrees Celsius (it’s still ok at 20 degrees, but the fermentation will take longer), and it needs good air flow. Creating a safe batch of kombucha is dependent upon maintaining a proper level of acid, which allows the finished brew to reach a pH level between 3.2 and 2.8.

At this point, the liquid you harvested will be flat. To get it fizzy, you’ll need to put it through a secondary fermentation in airtight containers and adding a little bit of sugar or honey. At this point, you can also add flavouring using fruits or fruit juice. If you don’t want any carbonation, don’t add any extra sugar because the culture is feeding off the sugars and producing the gas to create the carbonation. Keep an eye on your vessels to ensure that they don’t explode. You can prevent this by opening the jars after a couple of days to release some of the gas. When you are happy with the amount of carbonation, put your jars in the fridge to slow down their fermentation. While kombucha is quite delicious, refreshing, and great for your health (good info here too), start out with only half a cup if you do not normally include fermented foods in your diet. If you start out drinking copious amounts of this for the first time, you may feel bloated and uncomfortable. This is your gut adjusting and your body detoxifying.

The instructor also mentioned that 2 Tbsps of Kombucha contained 400,000 probiotics – great for gut health! And as a side note, if you are taking antibiotics, those damage your gut health so it is advisable to take some form of pribiotics with antibiotics. The instructor also suggested that we do not solely rely on kombucha as the fermented food in our diet. We should change it up because different types of fermented foods provide different types of good bacteria, but everyone should be having at least 1 serving of fermented foods per day.