Last week I intended to spray my fig trees with dormant spray to kill off any possible over-wintering bugs. I have never done this before, but I was concerned about my big fig tree because that was the one that suddenly had stunted growth part way through the summer last year. I keep telling myself that it went into shock after the freak hail storm, which damaged some of its leaves, but I am always worried about garden pests and disease. 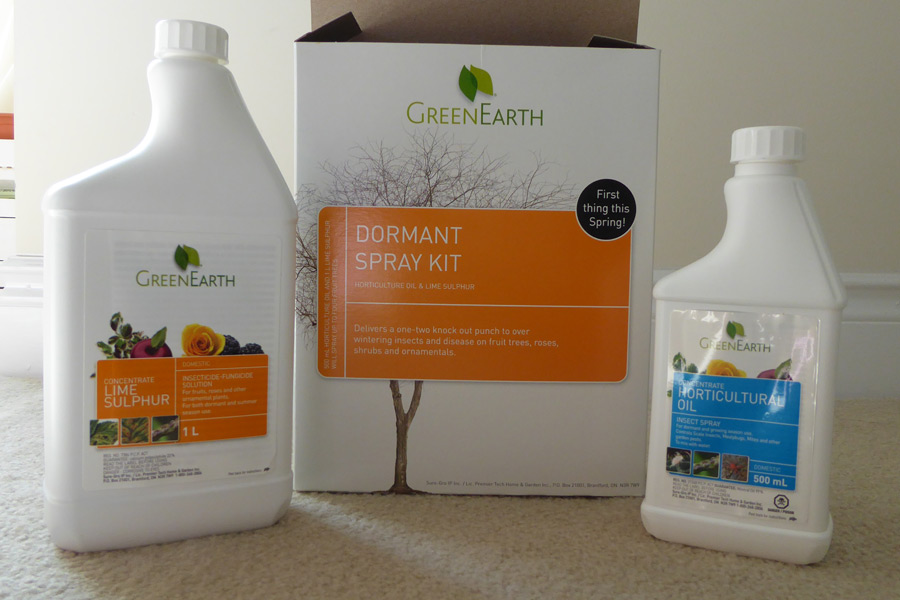 I opened up the dormant spray kit, which comes with horticultural oil and lime sulfur, and started reading the enclosed instructions. The thing that stood out was how toxic these products are, especially the horticultural oil. I realize that it is meant to kill insects and eggs, so it has to be somewhat toxic, but I was still surprised. After reading all the precautions about wearing chemical gloves when handling, working with the product with only long sleeve shirt and pants and socks and shoes, washing soiled clothing immediately, not dumping remaining material down the drain, not applying near a water source, not to drip product on wood or brick… my head was spinning. Do I really want to apply something so toxic to my fig trees? Can it somehow leech into my fruit?

I made the decision to forego the application, even though Mark Cullen, gardening expert, claims that “an application of Green Earth Dormant spray this time of year will save you a ton of trouble later by eliminating insect and disease problems that manifest in warm late spring weather.”

Hubby wholeheartedly agreed with my decision, but he also believes that I take great care of my plants and that they will be ok. But he has never had to deal with infestations like I have. Wiping out a colony to save a plant takes time, which is how I have learned to always inspect and deal with potential problems immediately before things get out of hand. Note that I did not have any solid indication of pests on my fig trees last year. My idea to spray this Spring was precautionary and not a reactive decision based on hard evidence.

It can be very difficult to spot problematic insects as some are microscopic. I have to admit that as I took some of the photos today with my macro lens, that’s when I managed to see a bug. I didn’t have a chance to identify it. I squished it immediately. All I know is that it was soft-bodied. I’m not even sure I got it. I’m hoping for the best. Based on the lighting, I couldn’t even see the colour of the bug. The bug was not microscopic, so it is entirely possible that it could have been a soil gnat. I have some buzzing around. They seem to have congregated in the soil of my avocado plant.

At the end of last summer, my neighbour gave me cuttings from her fig bush. She doesn’t know what type of fig tree she owns, as it was given to her as a gift. It seems she actually has two different varieties growing in the one pot. One variety is the Chicago Hardy that I have, but her other one produces yellow fruit and they are much larger. To be honest, I’m not sure which cuttings I got from her. She gave me two, but I only successfully rooted one of them. Since the cutting was so small, I did not over-winter it. I left it covered by the window indoors, and it leafed out over the winter. It’s still considered small, so I am not expecting it to produce fruit this year. 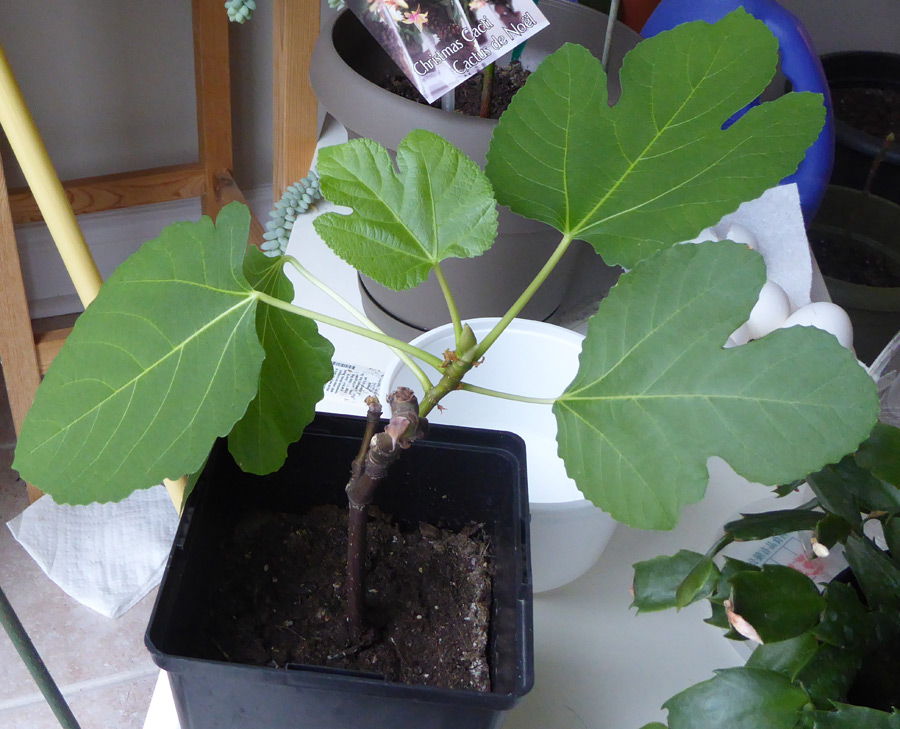 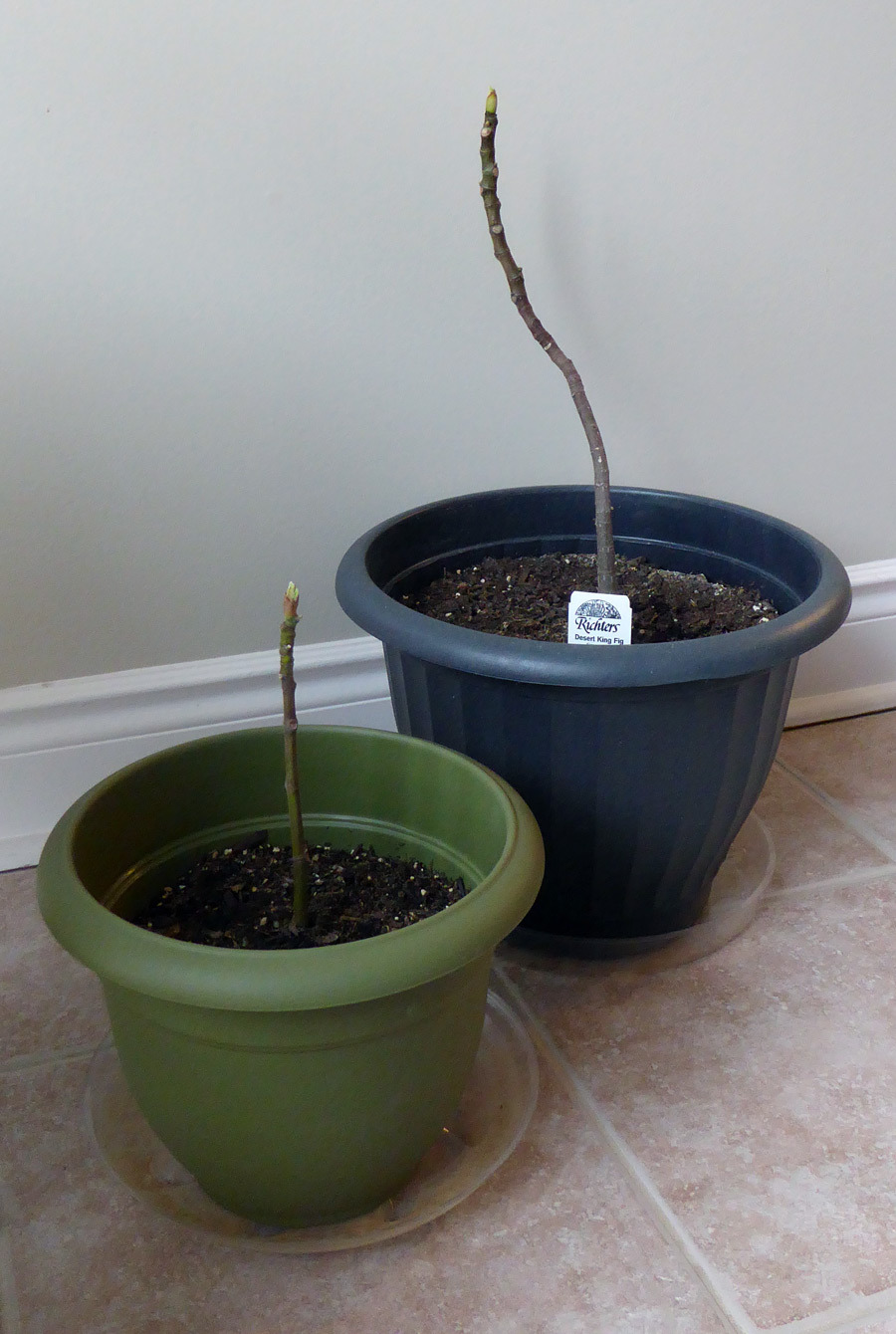 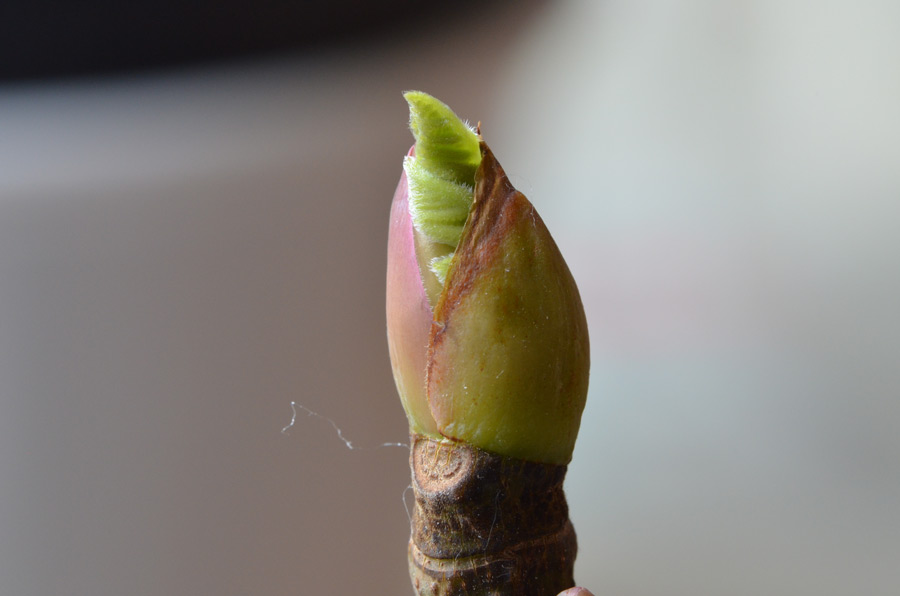 The mature tree, which is now two years old, is tall and trickier to bring up the stairs. I estimate it’s around 6 foot 6 inches. I hope it does well this year (no hail storms, please!). I have put so much care into growing this tree, so that it actually looks like a tree. It’s amazing to think that only two years ago when I bought ‘him’, he was only a foot tall. They grow up so fast!