On our way home from Ottawa yesterday, we decided to stop in Prince Edward County for dinner. This was a last minute decision, so I was pleased that I managed to get a reservation at Drake Devonshire. It’s a small inn, with a restaurant affiliated with The Drake in Toronto. It’s such a quaint place, one that I’ve already told hubs that we should stay at if we want to do a weekend getaway. It is situated right on the water, so the restaurant backs onto a small, private beach. Our reservation was very early, so we had plenty of time to catch the late afternoon sun. At first, we asked to be seated outdoors, but it proved to be too windy for our liking. We moved indoors, but with all the big picture windows, you still enjoy the beach views. 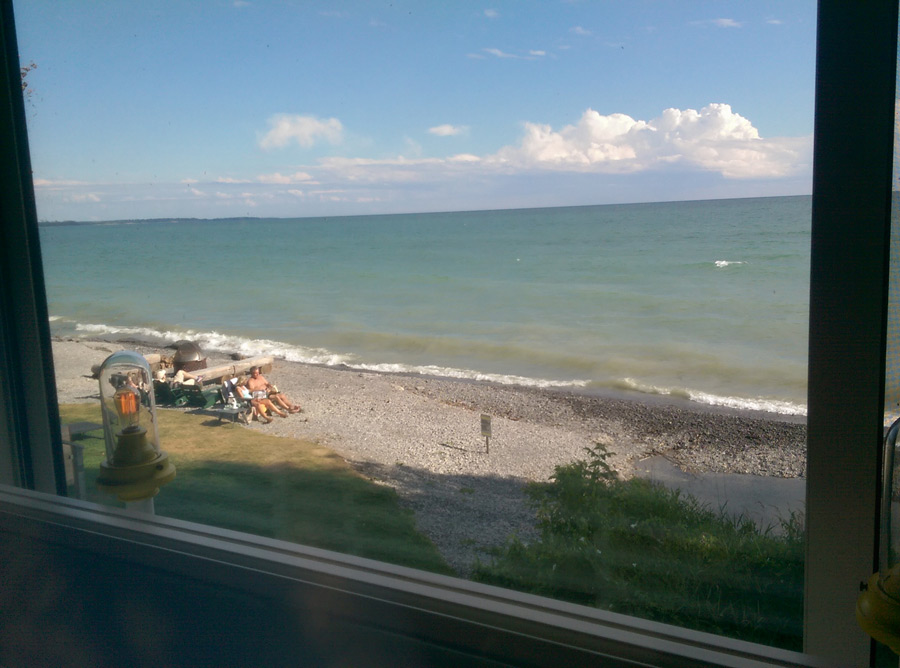 We’ve dined in Prince Edward County a couple of times, and at very good places; however, what sets the Devonshire apart is that it is hip and modern. It feels like it’s been created for the younger crowds. There is still that sense of “country”, but with an additional laid-back, chill vibe. I very much loved the concept and the experience. 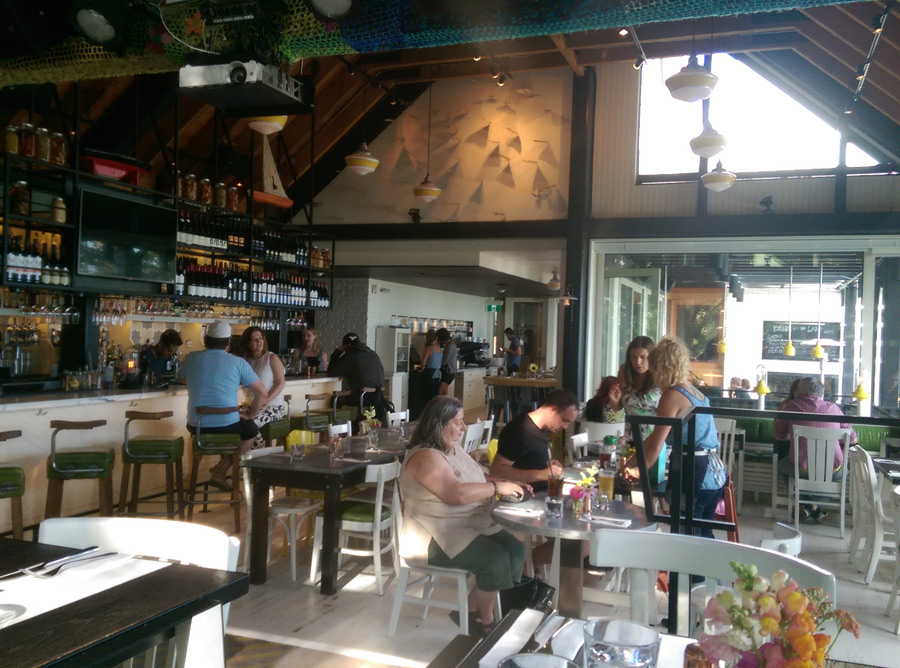 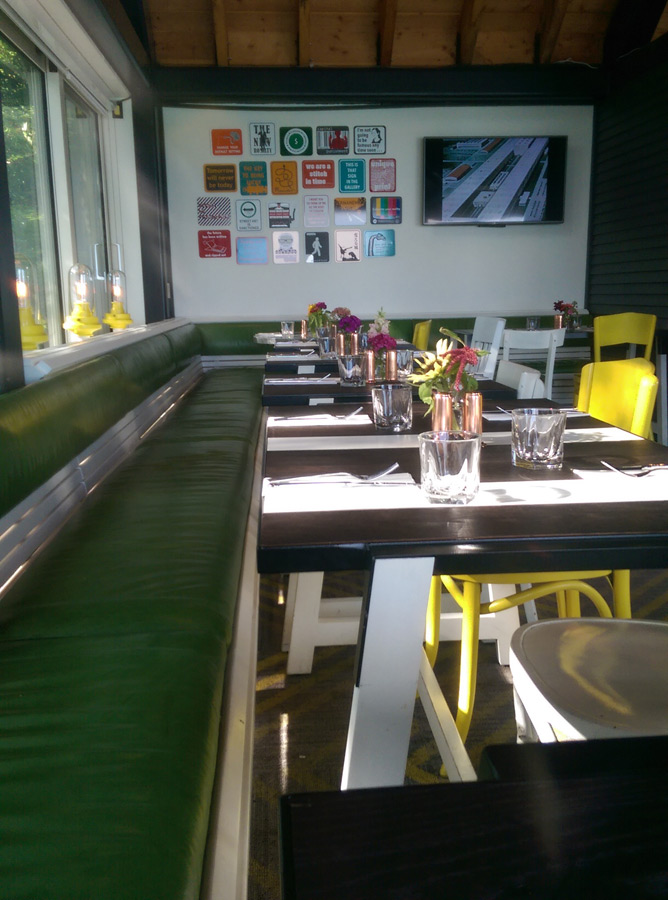 I need a moment to talk about the non-alcoholic cocktail I ordered, which was phenomenal. It’s called Wanderlust ($7) and is comprised of lemon juice, raspberry, cucumber, mint, & seltzer water. Holy cow, I LOVED it, and I don’t typically care for fizzy drinks. This was a light fizz, and not overly sweet. I could taste each of the ingredients. It is the perfect beverage, and I can’t stop raving about it. I had an added grapefruit slice bonus. Yes, I ordered a second. 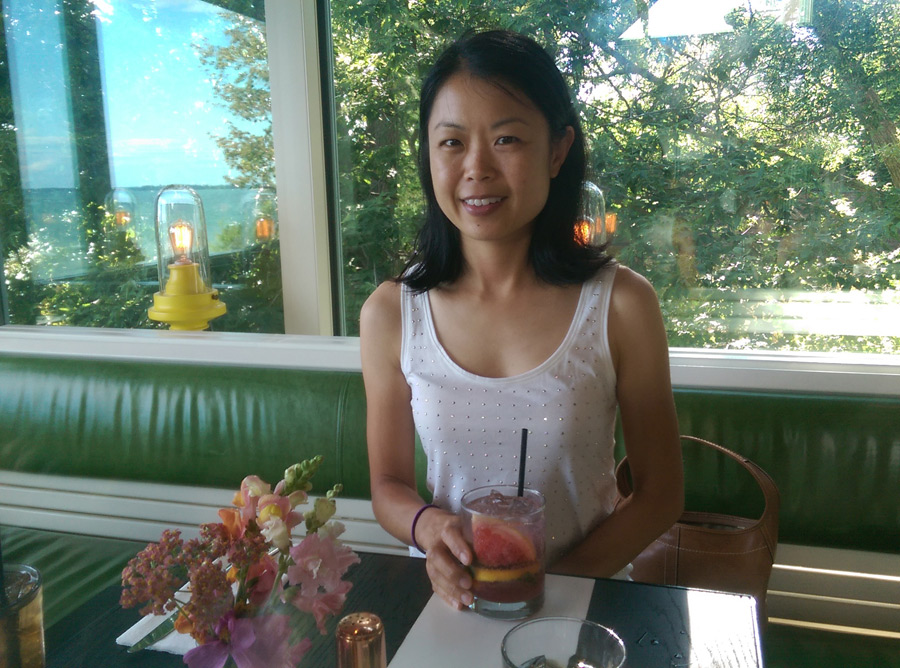 The food here is very good. Hubs ordered the steak tartare ($16) and he honestly thinks it’s the best one he’s tasted. They’ve put a modern (Asian?) spin on an old favourite. I swear I tasted some sesame oil, though it is not listed. Hand-chopped Ontario sirloin, fish sauce, spicy mayo, peanuts, birds eye chili, cilantro, & crispy garlic. I confess, I loved it too. 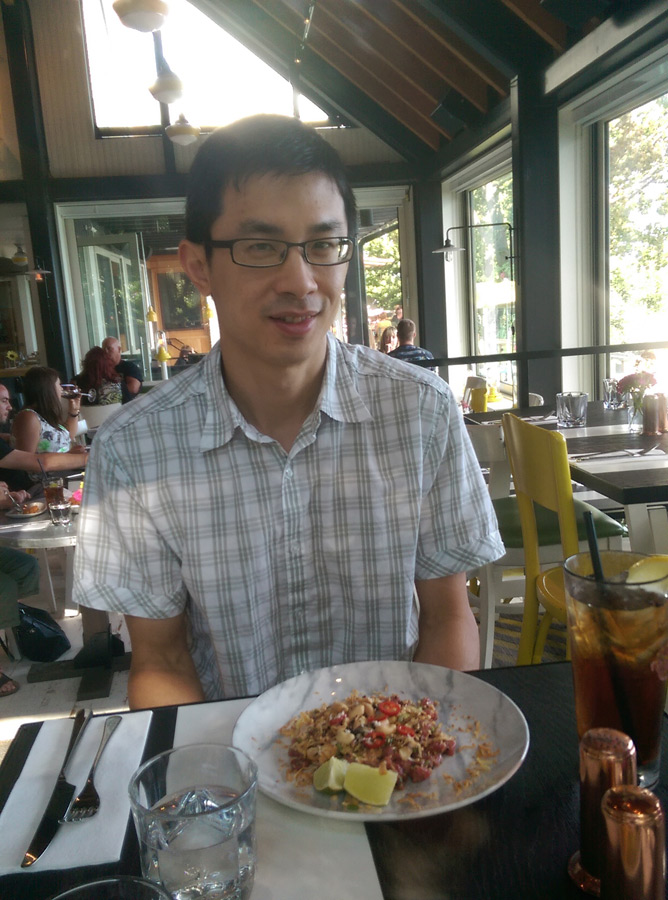 I ordered the Albacore ceviche ($17), which was also fantastic with large cubes of cilantro marinated tuna, fresh lime, pickled onion, avocado puree, ancho oil, and tortilla chips. It presented well, and it tasted amazing. My only complaint is that they could have provided a few more chips for all that tuna. 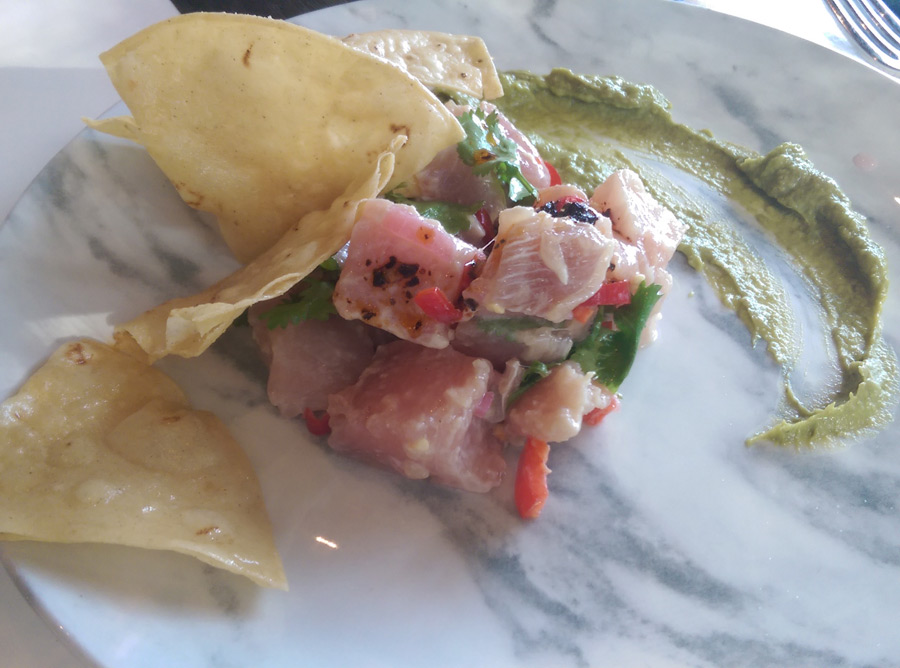 Mains were good, though I think the appetizers were better. I didn’t bother with a photo of my main, only because I think they could stand to improve the plating of the Roast Suckling Pig ($24). The pork was cooked perfectly; however, there was zero colour to the dish. It was all brownish, including the plate! The house-made milk buns was so good, but the fermented cabbage and beet mustard was a bit too overpowering.

Hubs ordered the Pan-Roasted Pickerel ($24) with zucchini, green pepper and lima ragout, and salsa verde. It was fine, but nothing special. What is important to note is that the fish was flaky and not over-cooked. 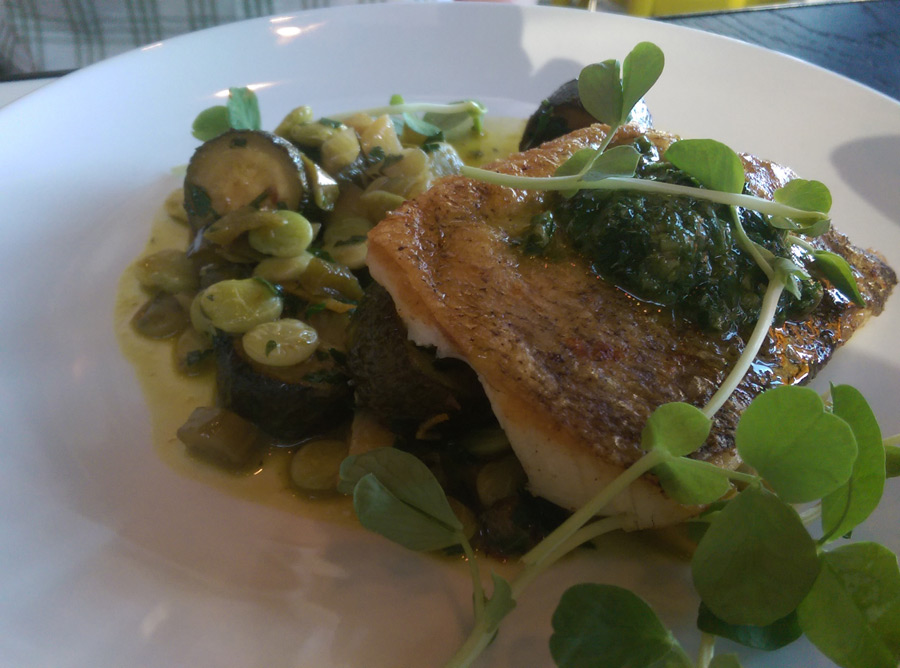 After dinner, we decided on some caffeine since we still had hours in the car. I ordered the espresso ($3.25), and hubs had the Americano ($3.25). Check out the size difference! And hubs found it interesting that both our drinks tasted the exact same – either I had a weak espresso, or he had a very large and strong coffee. The only difference was size. 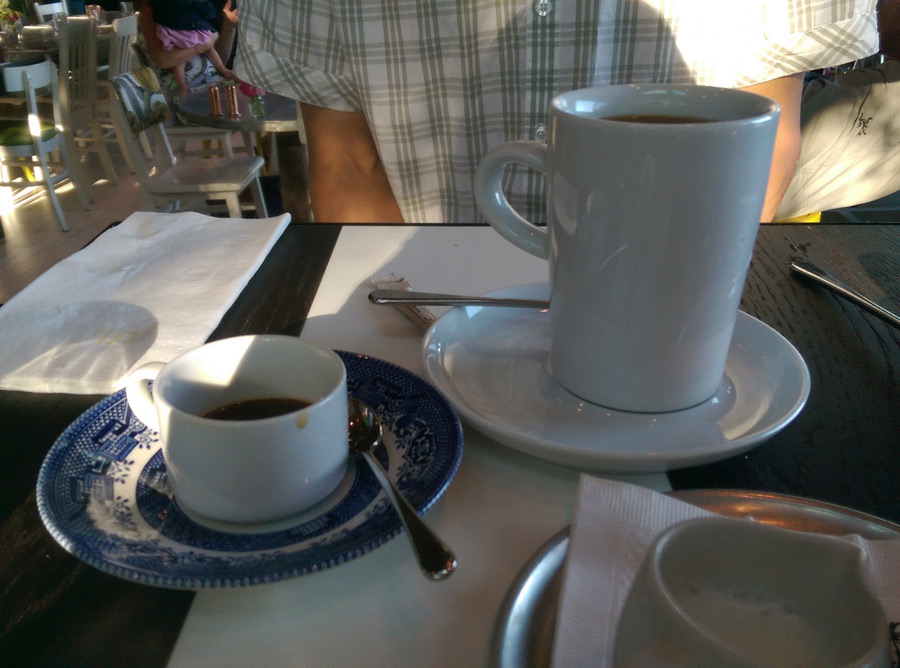 I was feeling up for a dessert, so we shared the Strawberry Shortcake ($9). Wow, it was delightful! We almost finished it, but it was a little too much for us. 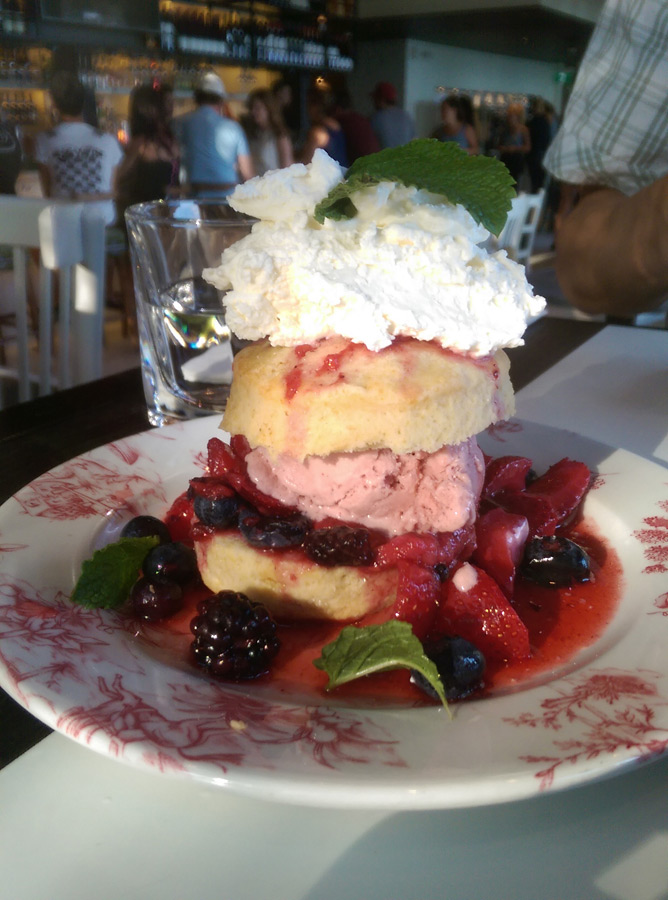 If you are in Prince Edward County, this restaurant is definitely worth a visit. I get the feeling that most of the other fine dining establishments in the area are more old school with the stuffier decor. Drake Devonshire feels more like an upscale cottage getaway. The prices aren’t unreasonable, and you’ll probably find something you’ll like on the menu. From the looks of it that night, the burger and hand cut fries ($18) was a popular option. I saw quite a few of those coming out of the kitchen.