Today we had brilliant sunshine! We did a loop ride, which took us along the coast. The landscape was stunning! Mountains, beaches, and Mediterranean ocean with huge, crashing waves.

The ride started out a little chilly but only because my gear was a tiny bit damp from the previous day, but as soon as we started the small climbs (small compared to the previous climbs), I started to get hot. I could see steam rising from some of the bushes, and I was wondering if steam was rising from me too. When we reached the first top of hill, I started peeling off layers. It wasn’t even noon, but hubs decided to crack open a beer for the ride down to the beach side cafe. Before rolling, we stopped to touch the cork trees and have a photo taken with Nestor, our van leader. Today would be his last day with us. 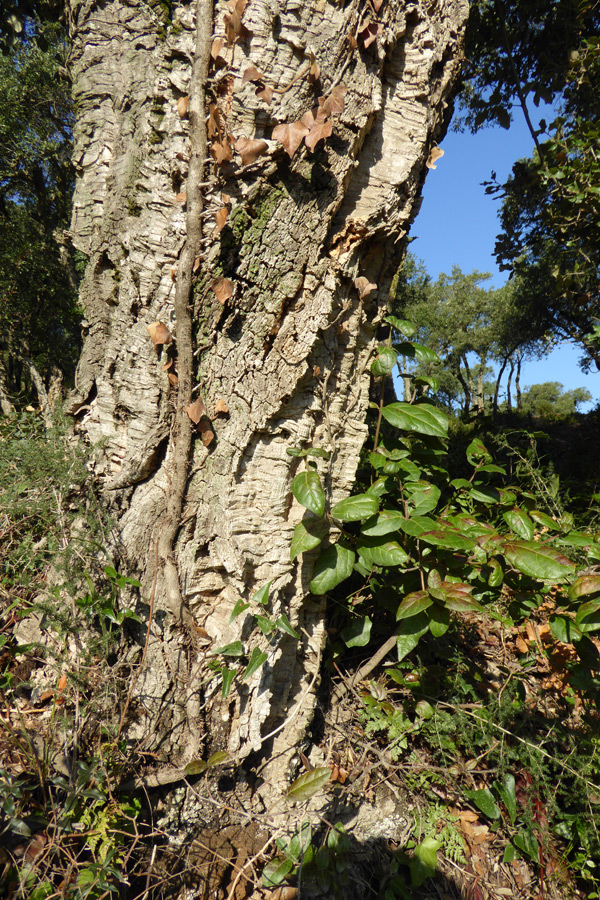 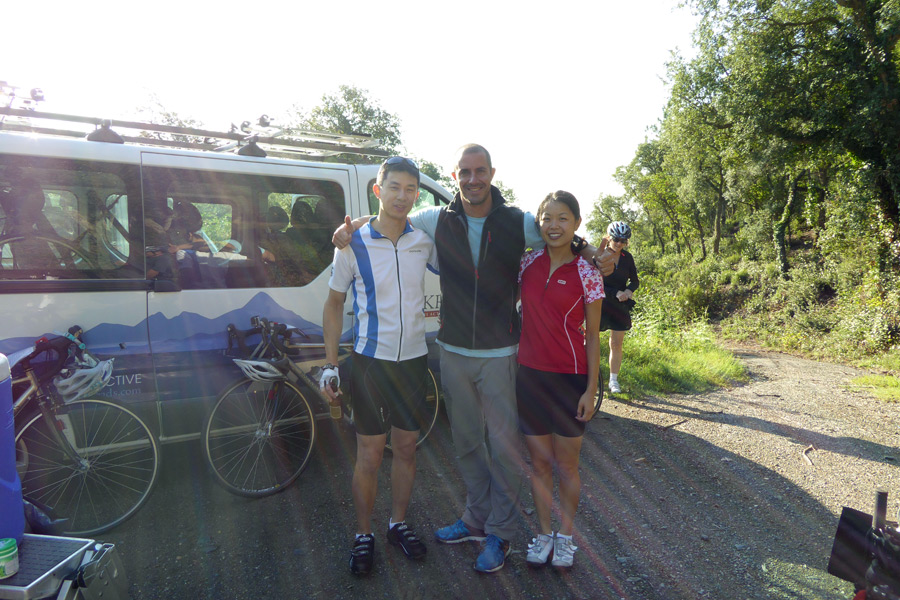 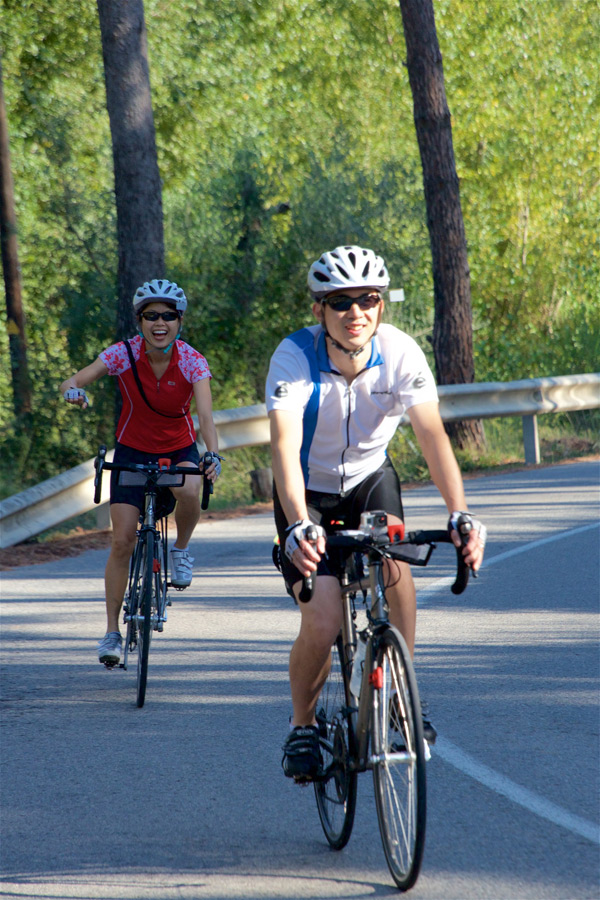 Approaching the beach, I was in awe. There was a huge (long) beach, with a boardwalk lined with palm trees. 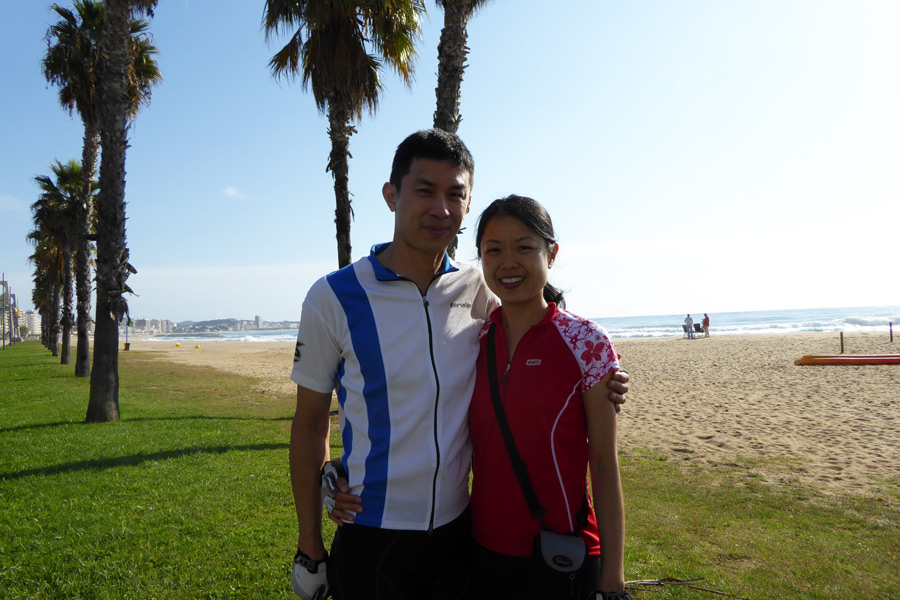 Aside: I mentioned that I love drivers in Spain. They give cyclists space. They signal to pass. They never honk or rush cyclists. It is a huge difference from cycling in Toronto. I haven’t mentioned the round-abouts yet. There were many. They were intimidating at first, but one you get the hang of them, they are fun, especially where there is a line of us riders together.

We stopped at this very chill cafe/lounge on the boardwalk. We were introduced to shandy from a porrón. So much fun! Uri explained that this is usually filled with wine, but seeing as we still had to ride to our lunch spot, it was filled with shandy. For those that wanted to practice first, there was a porrón filled with lemonade. 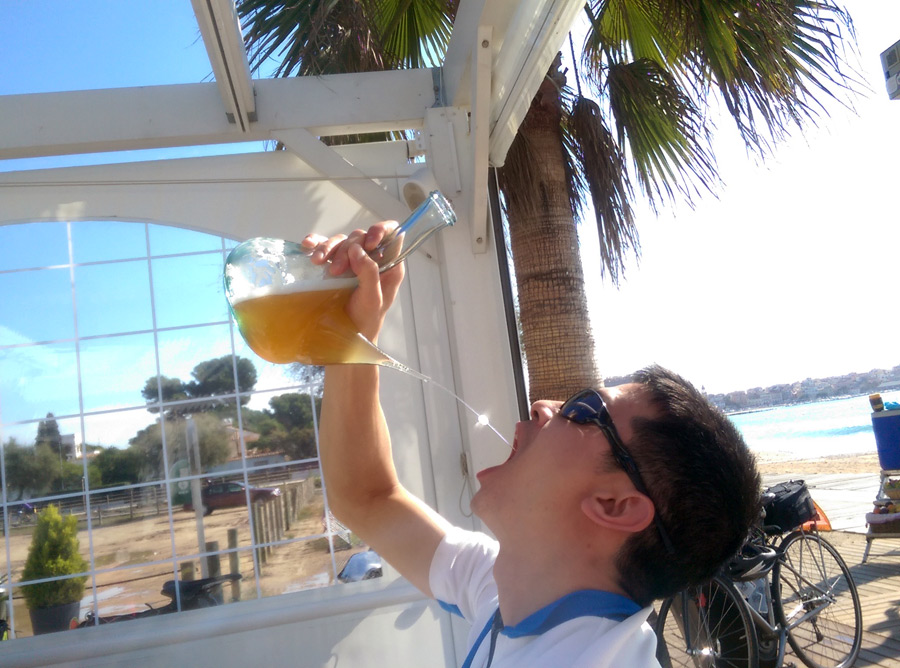 After a cappuccino, we continued to our lunch stop at a quaint little seaside town. There was one very scenic lookout before we rolled down to the sea. 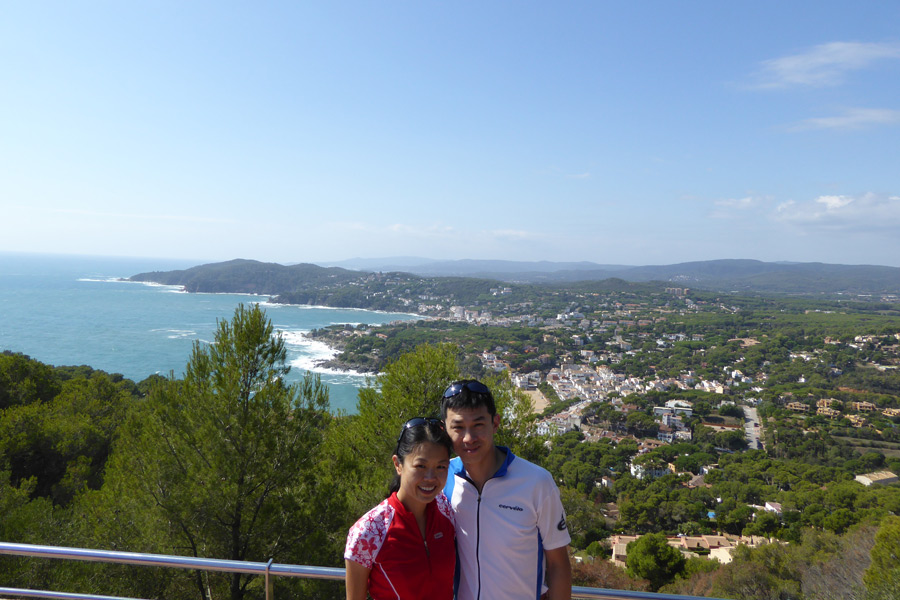 Hubs and I tried paella for the first time and it was actually good! It was a vegetable paella and it was flavourful without being salty. The rice was al dente, which was perfect. 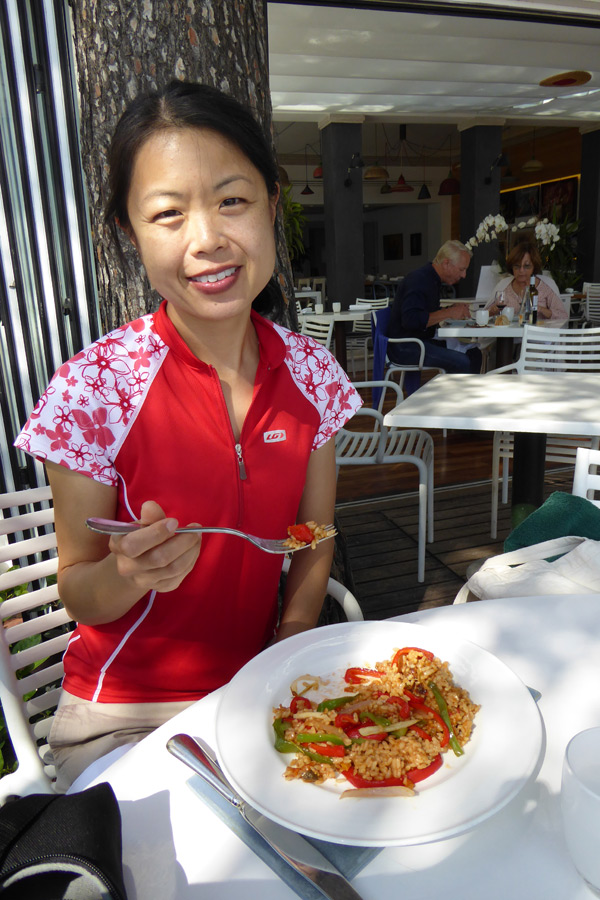 After lunch we walked along the beach, but neither of us was interested in swimming. The waves were too big, the water wasn’t that warm, and we wanted to continue biking. 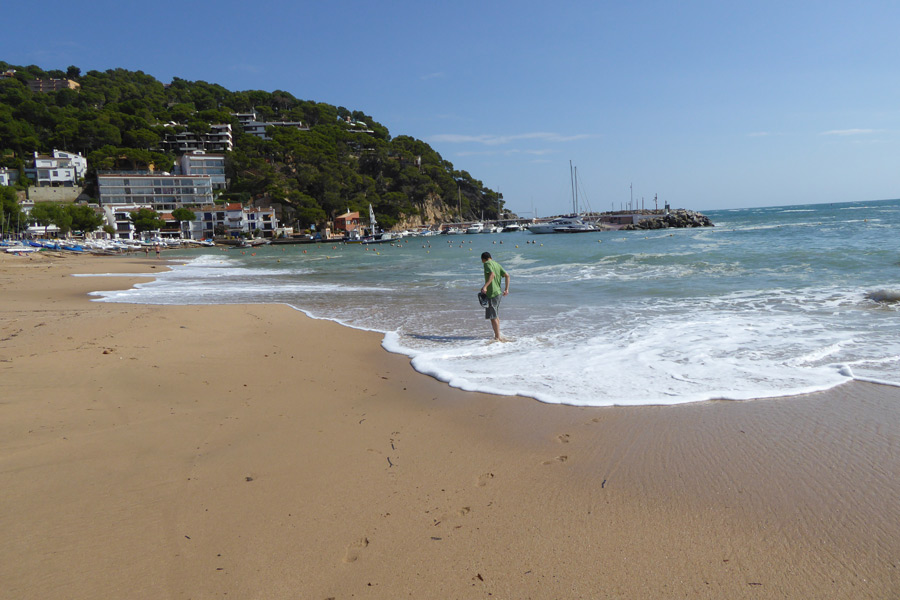 There was the option to shuttle back to the hotel, but we opted to do the afternoon ride, and when we reached the decision point, we committed to the additional 9 km long option. It was a 5 km climb, with a very steep section, and a 4 km downhill. The total ride today was approximately 75 km.

Tonight was the farewell dinner. It is always hard to say good-bye to such amazing trip leaders. 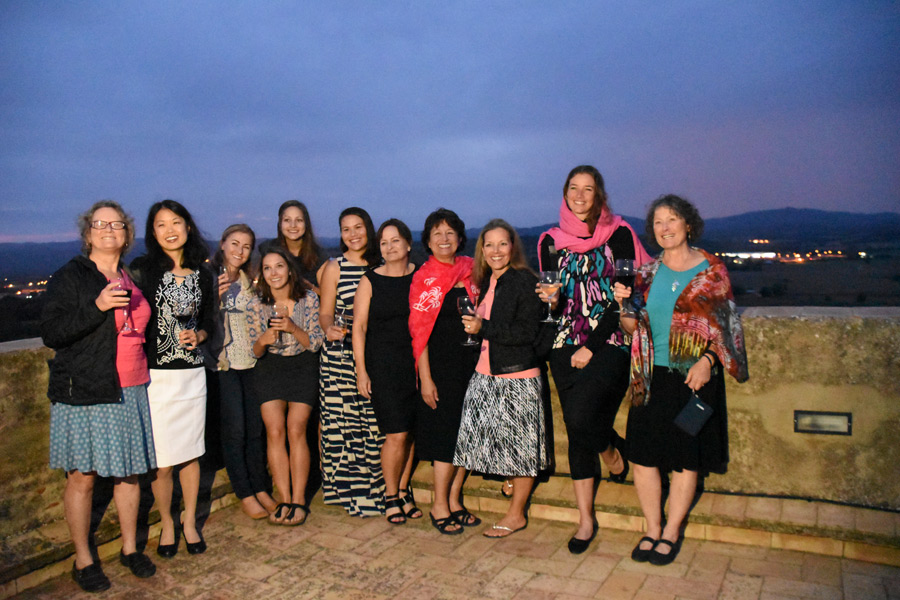 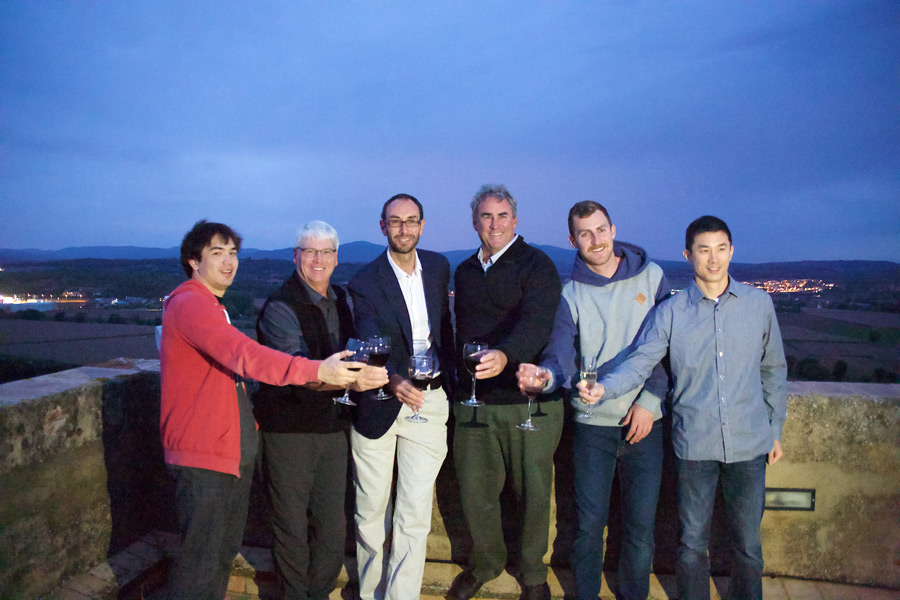