It was raining when I woke up. But on the good news front, Eduardo (Edu) from EnSegway had responded to my email and said that he could take us on a tour. I had emailed EnSegway, specifically asking for a tour with Edu because he has received many praises on Trip Advisor. The problem now was the weather. I wasn’t keen to ride a segway in the rain, so I asked Edu if he would be willing to take us out in the early afternoon. He said yes!

After a little shopping, we went to the meeting spot to wait for Edu. It was still raining lightly, but I was excited and nervous at the same time. Long story short, it took me a very long time to get going. I was so scared and had difficulty controlling the segway. It’s not at all like riding a bike. For me, the only way I was able to maneuver the vehicle was by holding on to the centre of the shaft, not the actual handles. The problem with the handle bars was that I had a tendency to steer it as if it was a bicycle; however, you are supposed to move it more like a car steering wheel, which is not intuitive. I eventually got the hang of it, and it was a lot of fun and a great way to see Sevilla – why walk when you can be on a segway! Yes, we were total dorks!

After the segway tour, guess where we went for lunch? Back for more Italian! Lunch was late, so I was concerned because we had booked a food tour this evening. 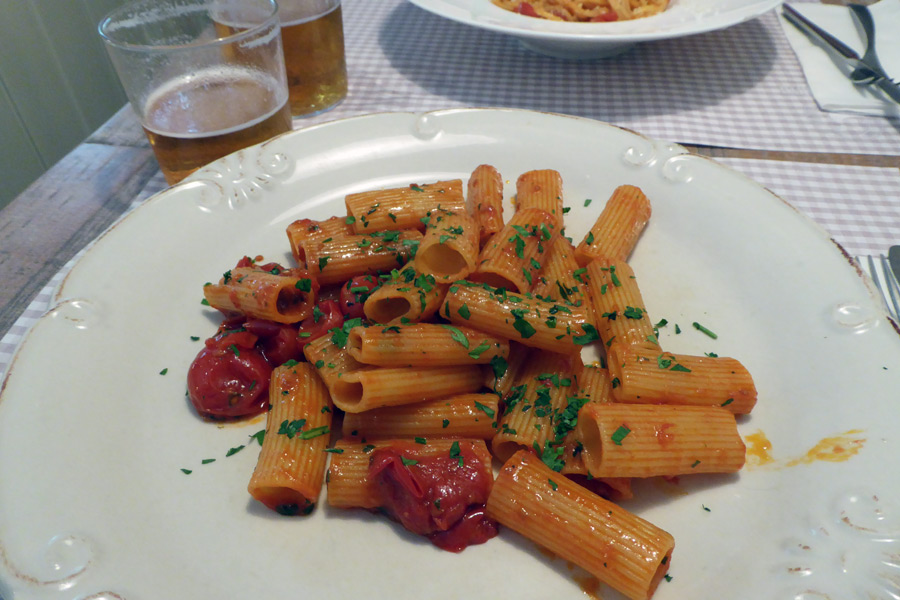 We spent the evening with Caya from Devour Seville on a history and tapas tour of the city. Caya is originally from Australia, but has lived in Sevilla for the last 11 years, so she knows her way around. I thought she did an excellent job, mixing historical facts with legends as we snaked along the narrow streets, working our way from tavern to tavern.

I loved that we were introduced to many new foods and drinks, and likely foods we would not have had the opportunity to try before leaving Sevilla. It’s also nice to know that Devour Seville supports small, family businesses. We started out with vermouth and Iberico ham (belloto). We had tried vermouth at Hidden Factory, but I had actually thought it was vermouth mixed with something. Perhaps this was explained to us by Xavier, but I missed it – the vermouth is typically served over ice, straight up. The vermouth is flavouvered with a little bit of caramel and infused with all sorts of herbs. I actually quite like it as an apperitf. The ham was delicious, probably the best we’ve tried so far on our trip. Our next stop was at the second oldest tavern in the city, where we tried orange wine with chicharrón and mangega cheese. 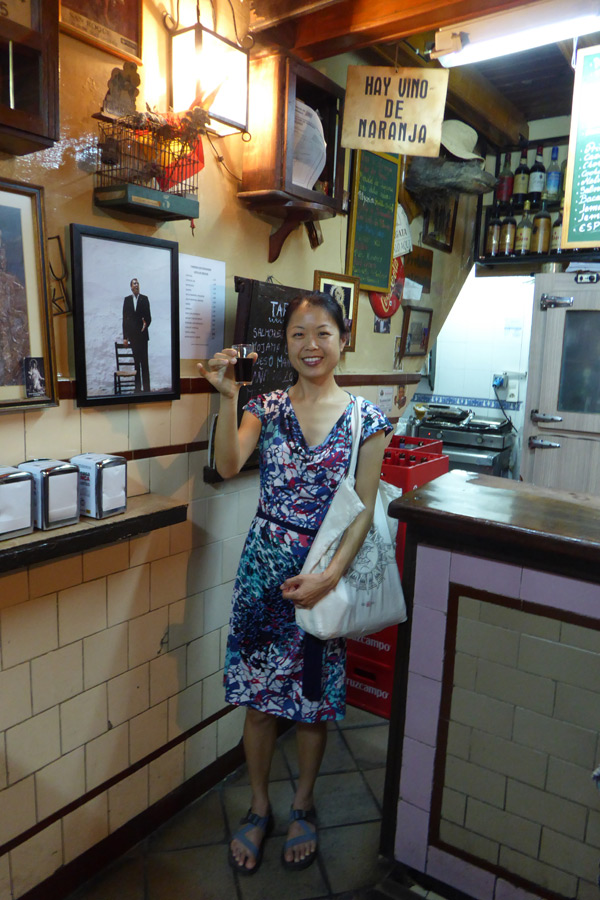 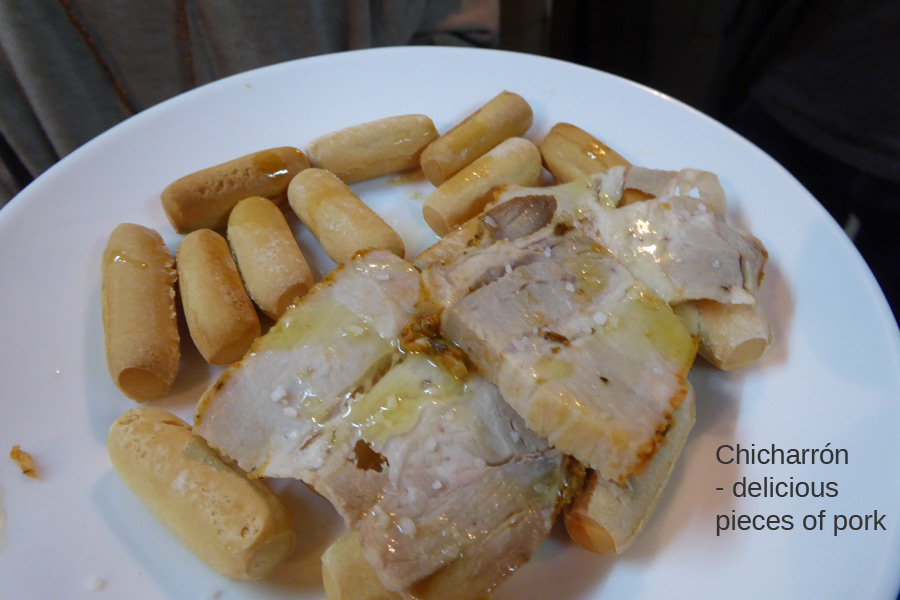 Next stop used to be a bodega in the old days, but today it serves tapas as well. Here, we had our first experience with a dry, white sherry and learned that sherry is actually wine. It’s 14%, and was a bit too strong for me, even paired with the little sandwiches – chorizo, salted codfish, and a stewed ham. 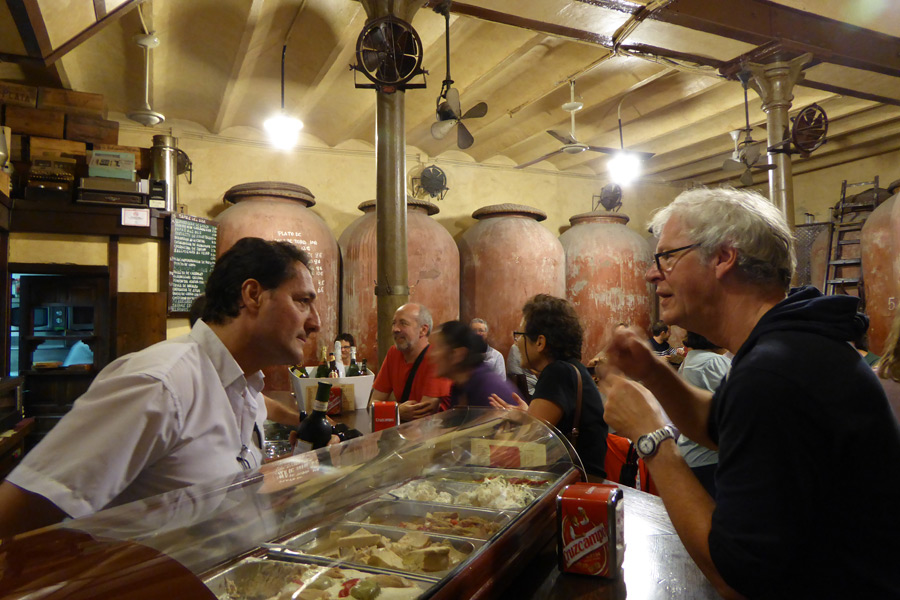 We then moved on and had a glass of tinto de verano (red wine with lemon soda) and now we had to choose our own tapa. I decided to try the spinach with chickpeas, which is a very traditional Andulsian dish with strong Moorish influence. Hubs had the San Jacobo de calabcin, which was delicious!

I was really starting to get full at this point, but we still had to move on to our final destination for the main meal! We visited Enrique Becerra, a father-son run restaurant, we we started with a darker sherry, plus a white and red wine, paired with two tapas each, followed by dessert and a dessert wine (a sweet sherry). Needless to say, I was a little bit drunk when we left.