Back in our hotel room, ready for a siesta. We spent the day walking through the Alcazar, and didn’t even finish the entire garden because the site closes at 5 pm (and they kicked everyone out at 5:45). Sure, we started a bit late, so we only had about 2 hours. Give yourself more time if you come to visit. We slept in today, snoring until 10 am, waking up a little sore because the mattress is a bit hard. I popped an Advil and went down for breakfast. Despite the few positive reviews on TA about Becquer Hotel offering the best hotel breakfast in Spain, it really isn’t. It isn’t the worst breakfast, but it is nothing special. What it is is convenient. 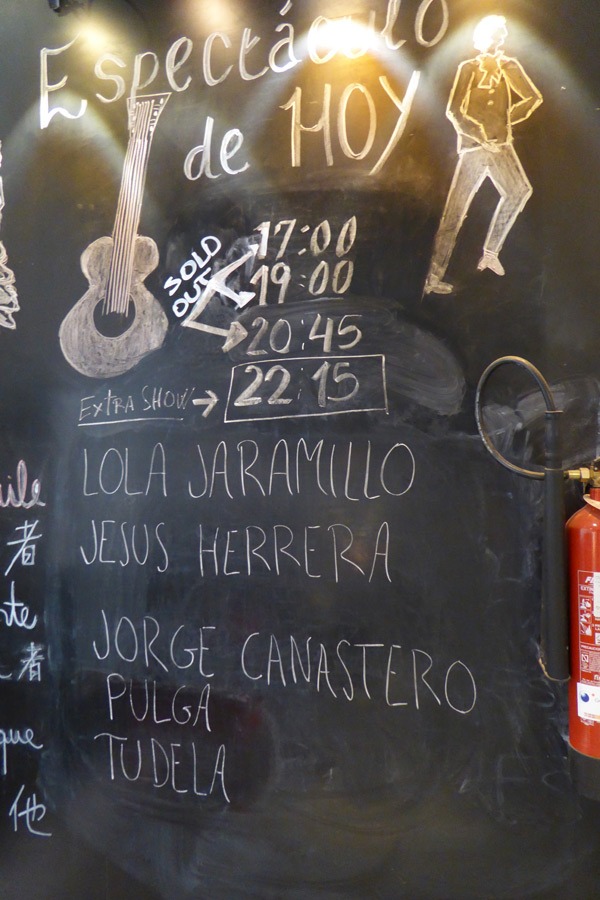 I suppose we could catch the 5 pm show tomorrow, but I didn’t want to cram too much too close to our Tapas tour, which is a four hour event starting at 7 pm.

On our way to the Old Quarter, we decided to stop and check out the Metropol Parasol. This installation is the world’s largest and most expensive wooden structures, and it is controversial. Intended as a Guggenheim Bilbao-type landmark, to put Seville on the contemporary architecture map, this extraordinary, flowing structure (known locally as Las Setas, the mushrooms) consists of six huge linked parasols made of waffle-type criss-crossed wooden beams – it is said to be the world’s largest timber-framed structure. Metropol Parasol’s trademark amorphous shape can be seen reflected in every detail of the development, from the curvy benches to the sinuous flowerbeds. The parasols, which measure 150 x 70m in total, took six years to build, and cost a reported 123 million euros. 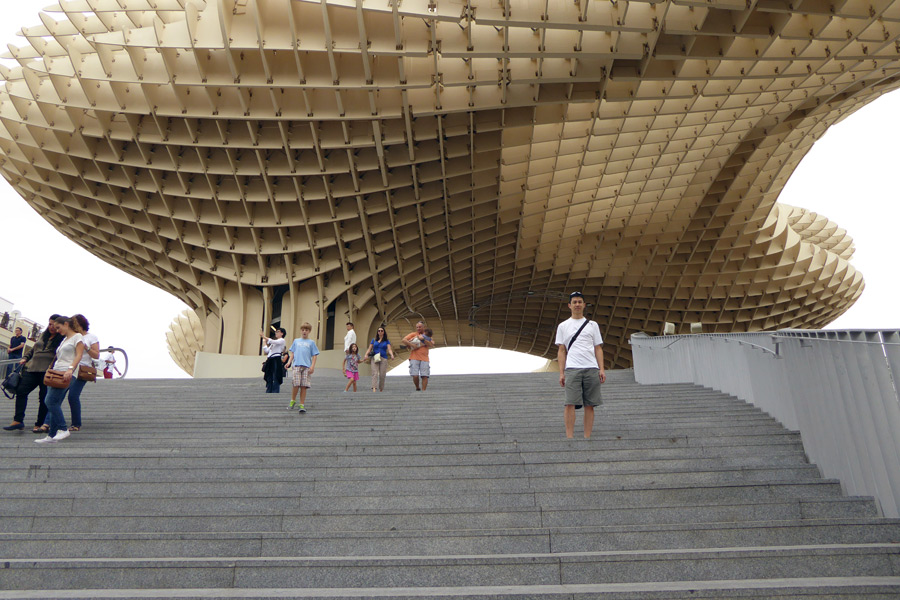 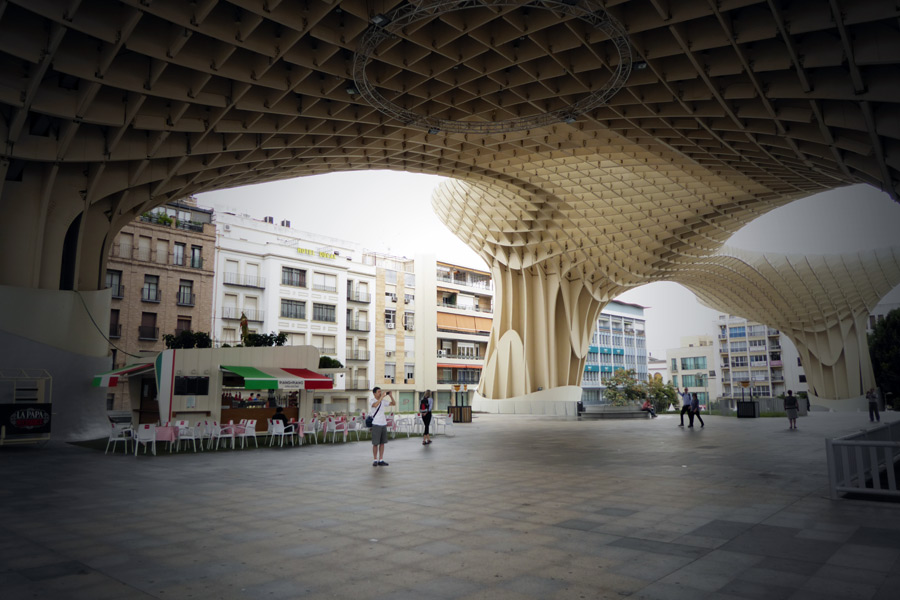 “Metropol Parasol” has left nobody indifferent. Apart from opinions about its visual impact or its supposed condition as “spectacle architecture”, the fact is that the work took six years longer than initially envisaged and the first budget was tripled. It is not only the resulting structure that is gigantic. The economic drain it represented has ended up with a highly indebted City Council and the controversy in the media and Council meetings has also been enormous.

My opinion, it’s so ugly. Hubs didn’t understand why this structure was built at all. My guess was that it is to provide shade in the summer months, which we later learned on our tapas tour to be one of the main reasons. I am embarrassed to learn that the engineering firm that I used to work for, was involved in the design of this hideous landmark project.

I love the twisty little alleyways in Seville, and the cobblestone roads. It truly is how I imagine quaint European towns. The streets are narrow, yet they manage to squeeze in small tables in front of small restaurants. In Barcelona, there is a lot of outdoor tables on pedestrian only boulevards, which are lined with trees. 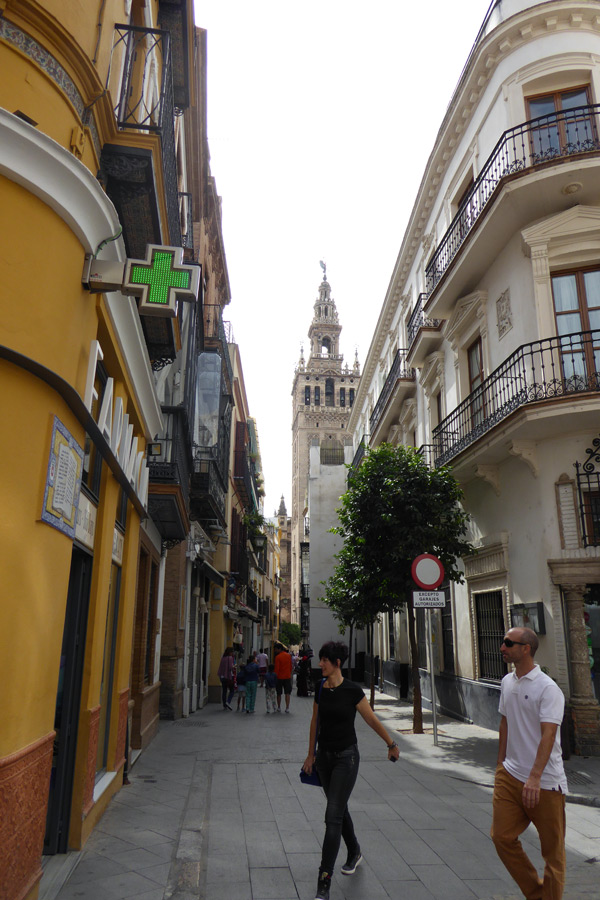 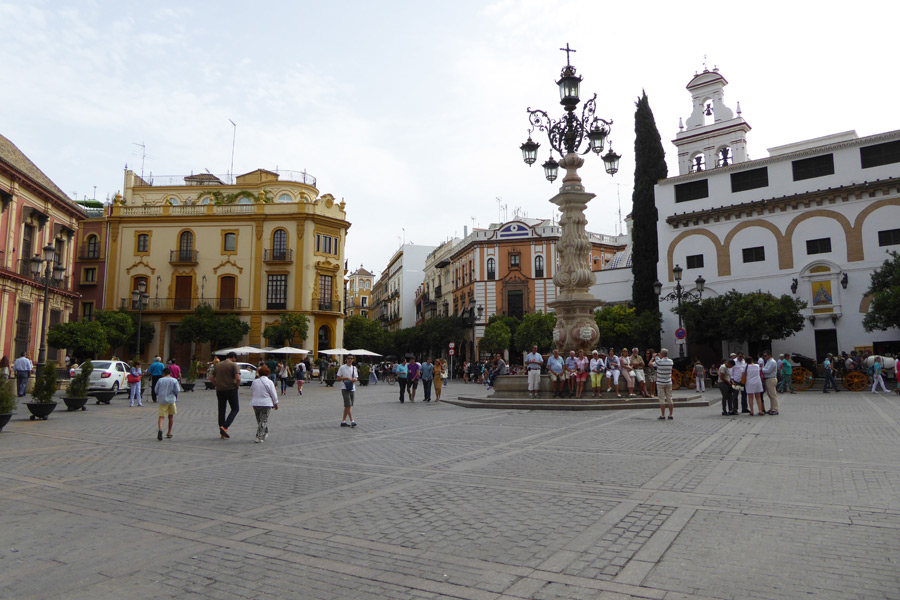 The cathedral wasn’t open for tours when we arrived, but there was a long lineup for the Alcazar. We made the decision to have lunch before doing any more site seeing, and walked a few minutes out of the Old Town to avoid the more touristy eateries. We decided on a place which had outdoor seating. I was laughing at the beverage pricing. All bevvies, including water, costed more if you sat outdoors. The water cost £0.90 extra if you were outside. The waiter tried to sell us the paella, but we opted for the ham and cheese sandwich. 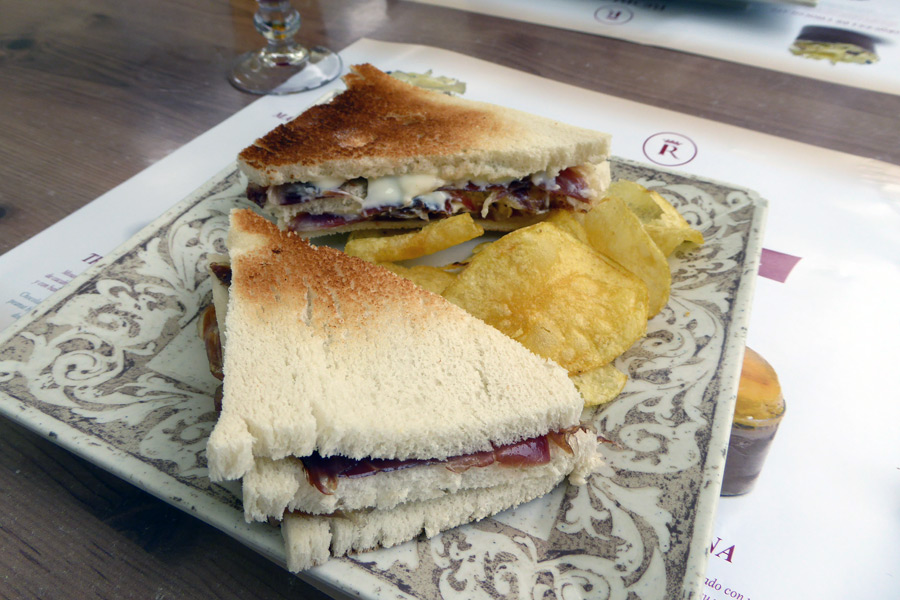 It was nothing like the one we had in Barcelona on our last day (photo below). This was on regular white bread, with way too much mayo. I hadn’t realized that we ordered the Serrano ham instead of the Iberico acorn ham. 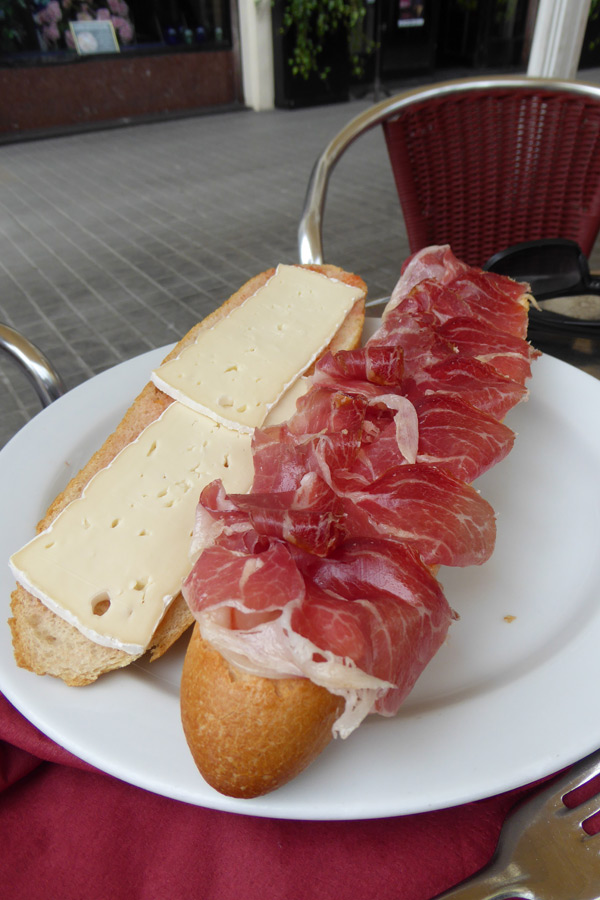 I am a full fledged ham snob now. I am unimpressed by Serrano, which is way too salty. I need to find a way to bring back a leg of Iberico ham.

The sangria was much more potent than the jug we shared at M last night. I needed an espresso to ensure I didn’t lose steam, but coffee outdoors coat twice as much at this joint, so we agreed to be Sevillian and find another spot for dessert and coffee. 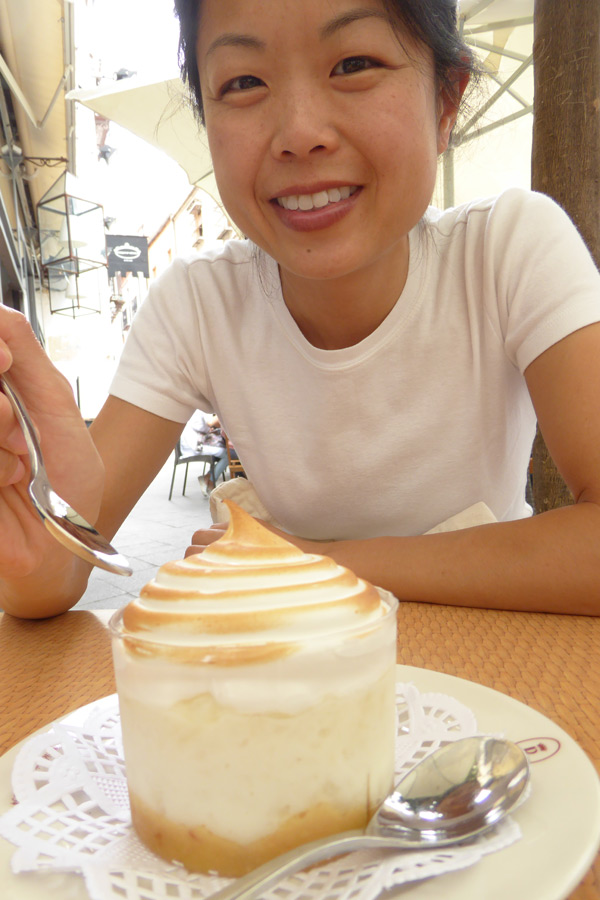 After the shot of caffeine, we lined up for Real Alcázar. The Alcázar of Seville is a royal palace, originally developed by Moorish Muslim kings. (For a brief history, click here). The design is fascinating and to imagine people back in the day living in this palace is…hard. The details in the architecture and intricate design is astonishing. It isn’t exactly my style, but I can still appreciate the beauty of the colours and details. The bedrooms did not have much in the way of natural light, but the courtyards and the massive garden made me envious. The garden was more like a well manicured orchard, with perfectly trimmed bushes and Cyprus trees, cordoning off orange, lemon, and pomegranate trees. How I desperately wanted to pick the ripe looking oranges, but they were out of reach! 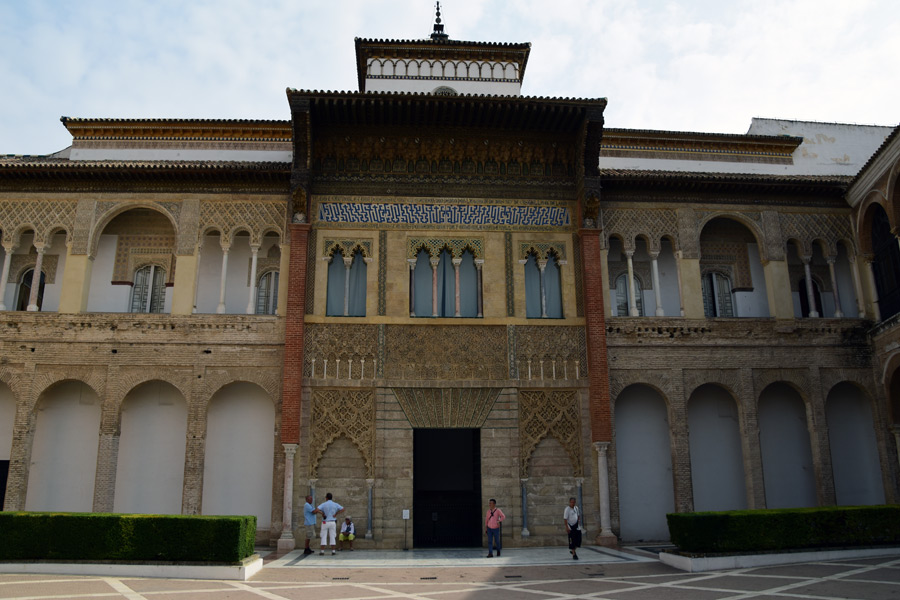 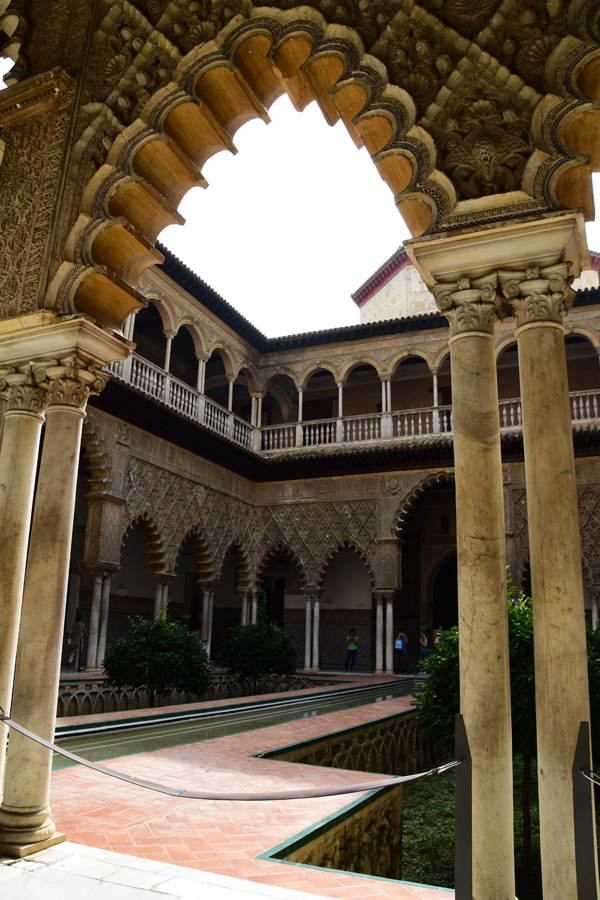 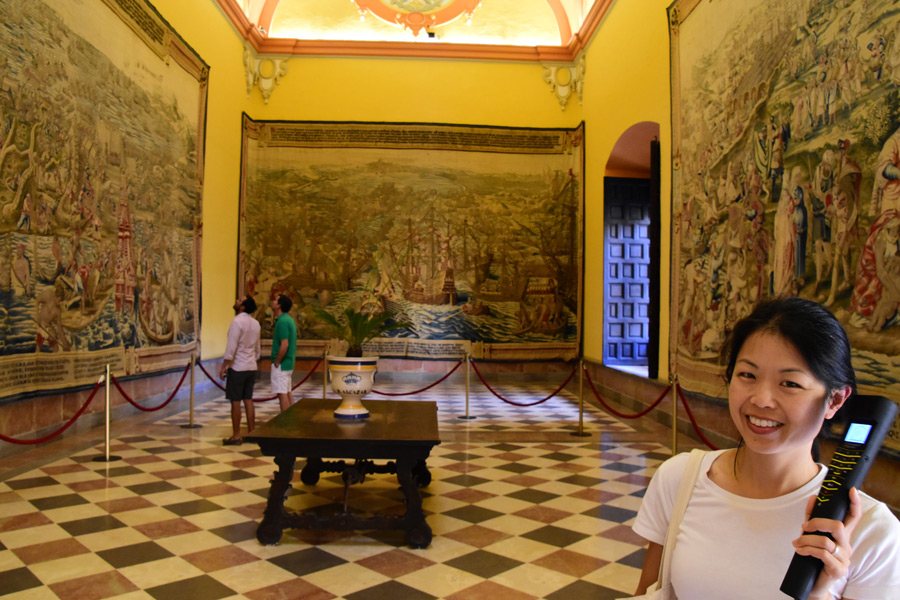 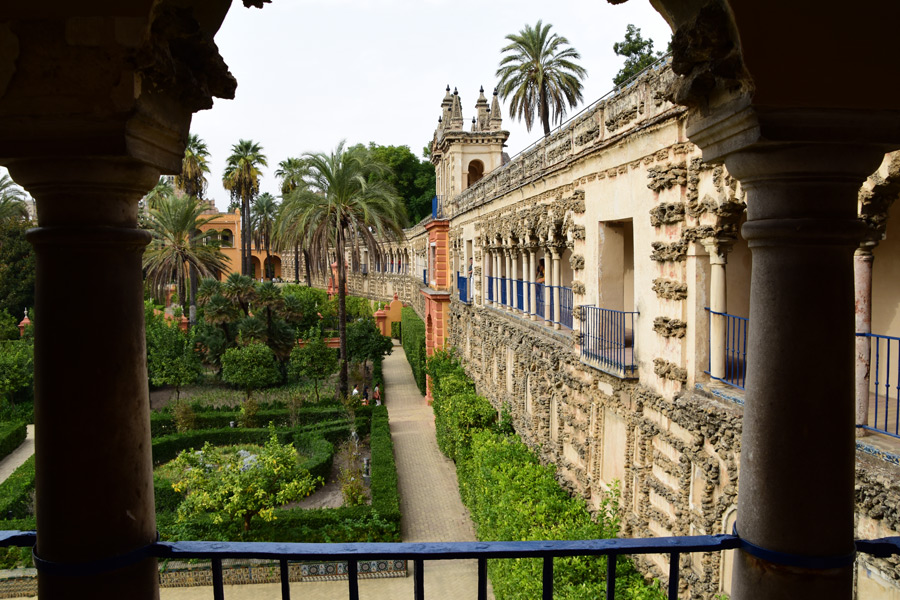 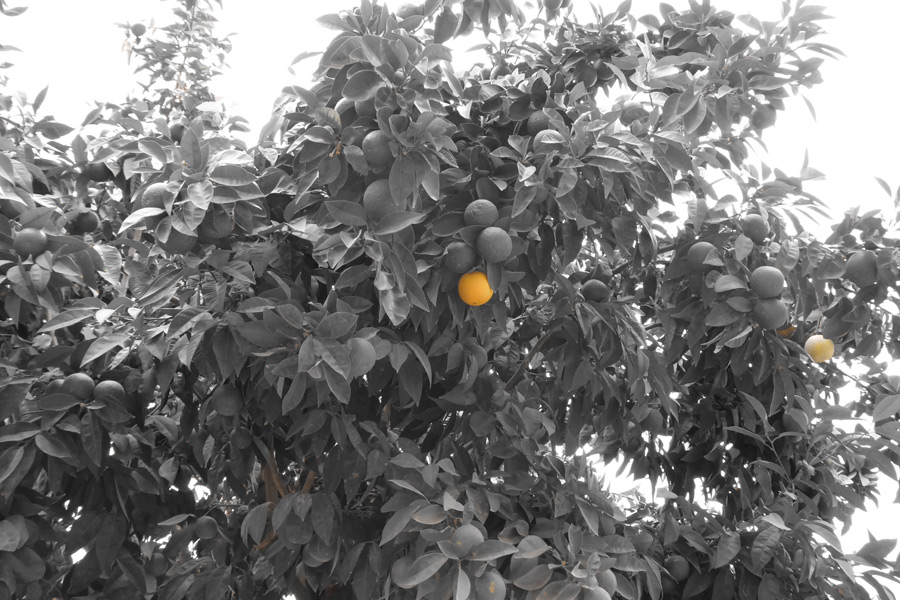 We are now resting in our room!, but it turns out I have traded my nap for blogging, and we need to leave again soon. Hubs wants to ensure we eat before the Flamenco show. He gets nervous about going hungry. I figure we can eat light now, see the show, and have tapas again after. To be honest, I am not hungry at all. We finished lunch at 3 pm! That’s five hours ago, but he is right. If we do not eat something before 10:15 tonight, I probably will be starving.