The growing season is over, and I have a lot of chili peppers in my fridge. What am I supposed to do with all of it? I’ll admit that I went a little crazy last year with the canning. We still have a lot of canned fruit in the basement. One of the canned goods that is used by me has been the chili jelly, so why not do it again?

Using the same recipe as last year, the one from Canning for a New Generation, I set off to work early in the morning. 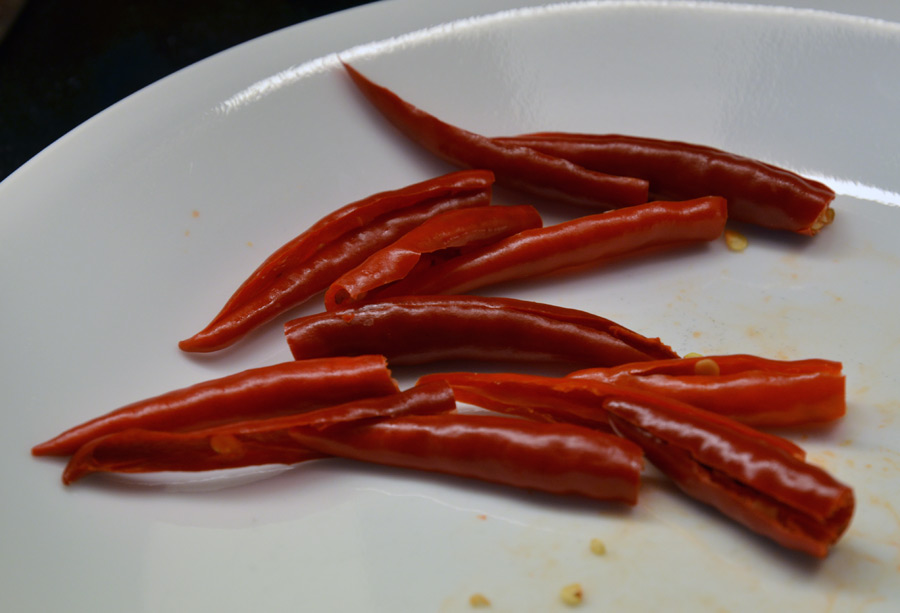 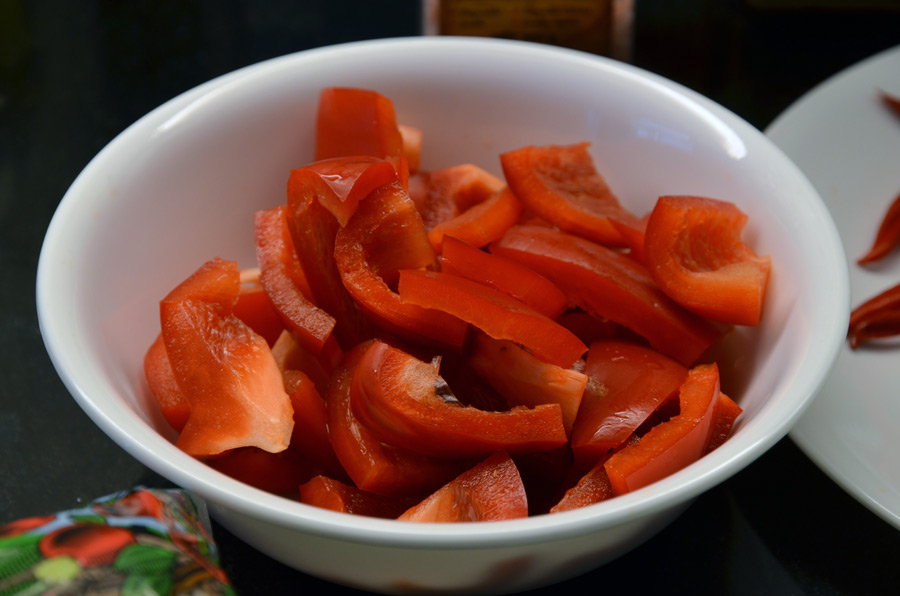 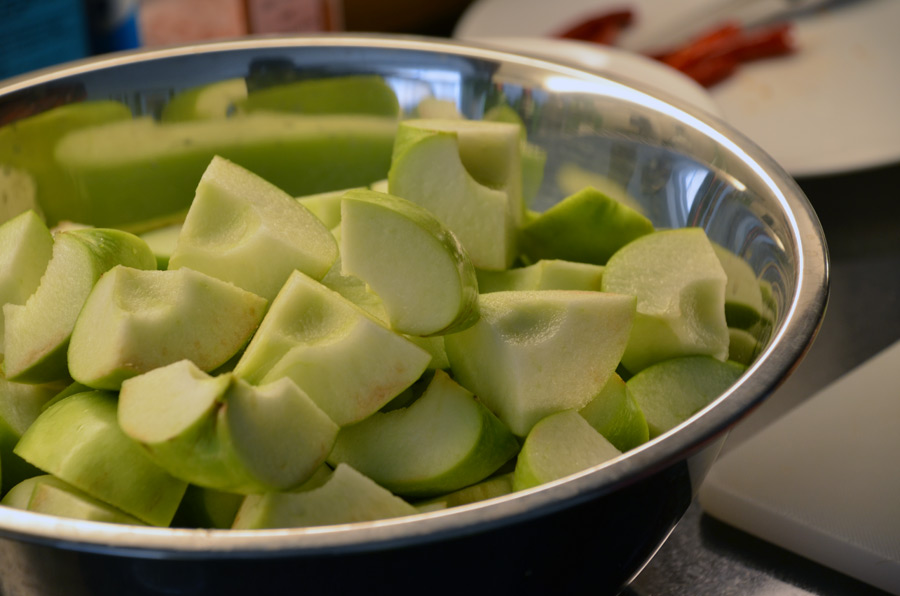 Last year I was canning in the summer, so I believe I also included black plum, which is no longer available in our local grocery stores, so I resorted to cranberries that I found in my freezer. The plums or cranberries is really to naturally add the red colour. You could also use red onion skin. 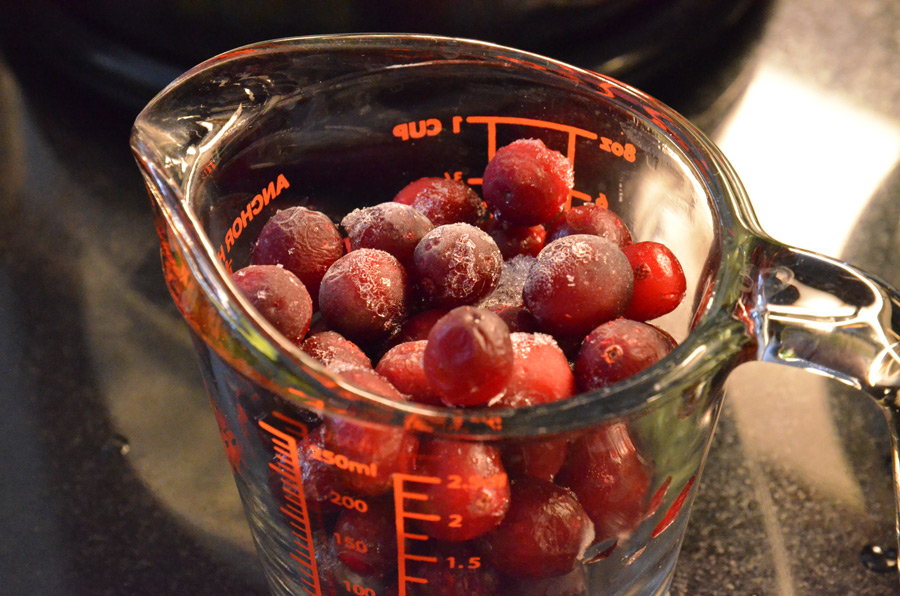 Once all your chopped ingredients are ready, throw it all into a large pot. 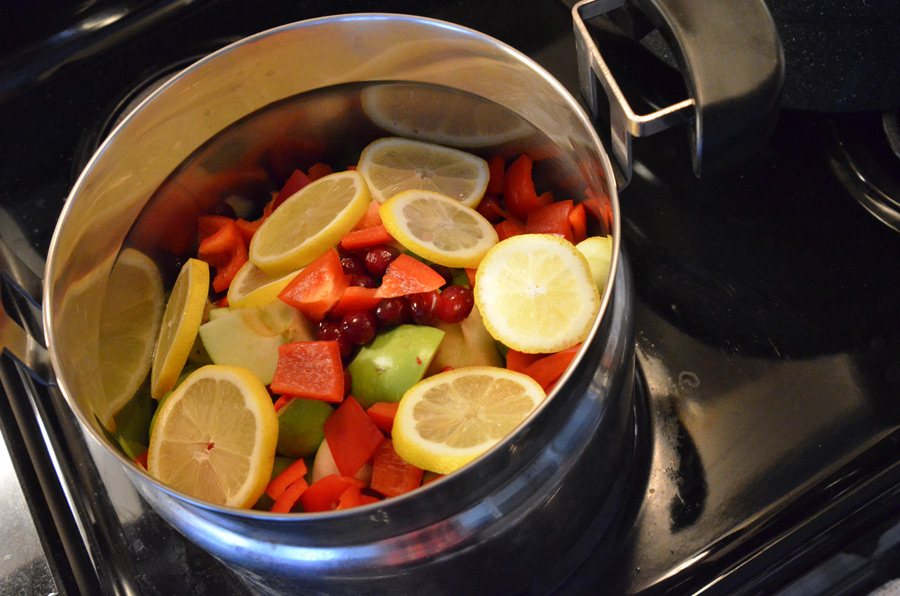 Add your liquids (vinegar and water). 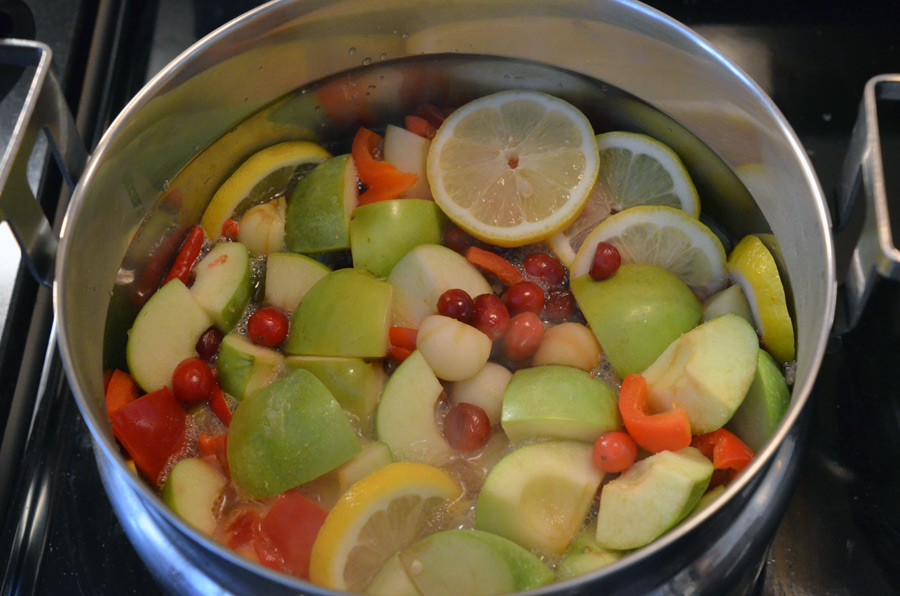 Let your mixture boil down. It will smell sour (vinegar), sweet (the fruits), and spicy (the chili de arbol). You could start boiling the water to sterilize your jars at this point, though I could afford to wait longer. 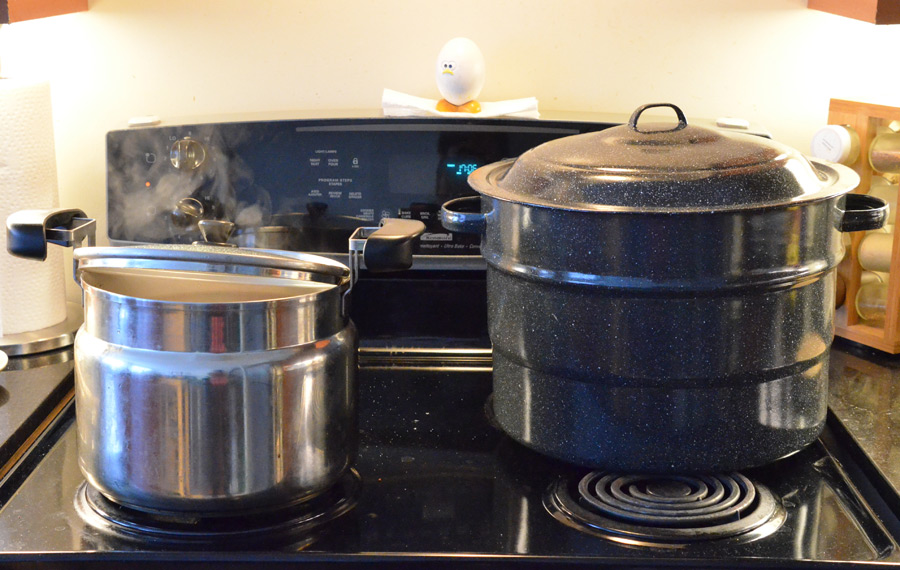 Once everything is soft, and the apples skins are starting to separate from the flesh, it’s time to strain. I am using a jelly bag for this process. 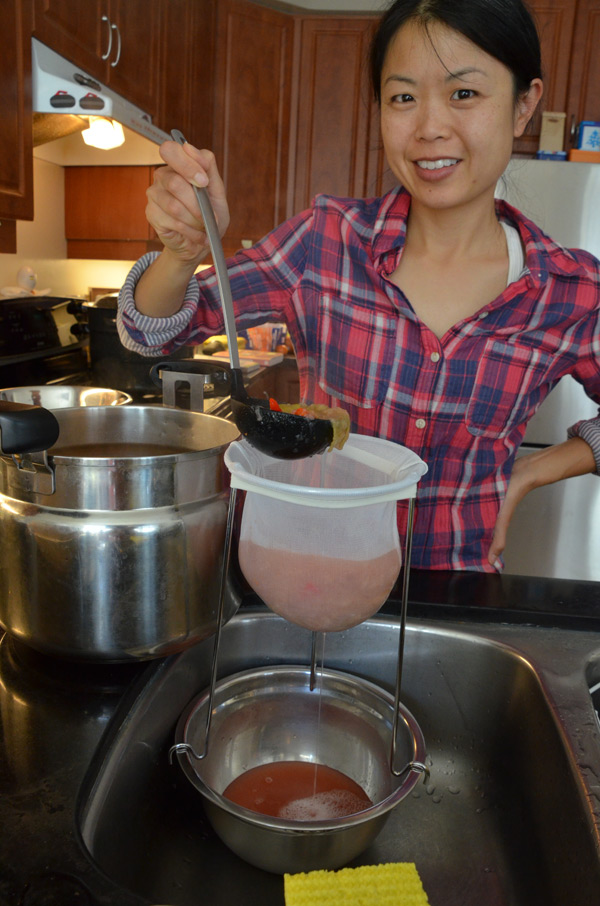 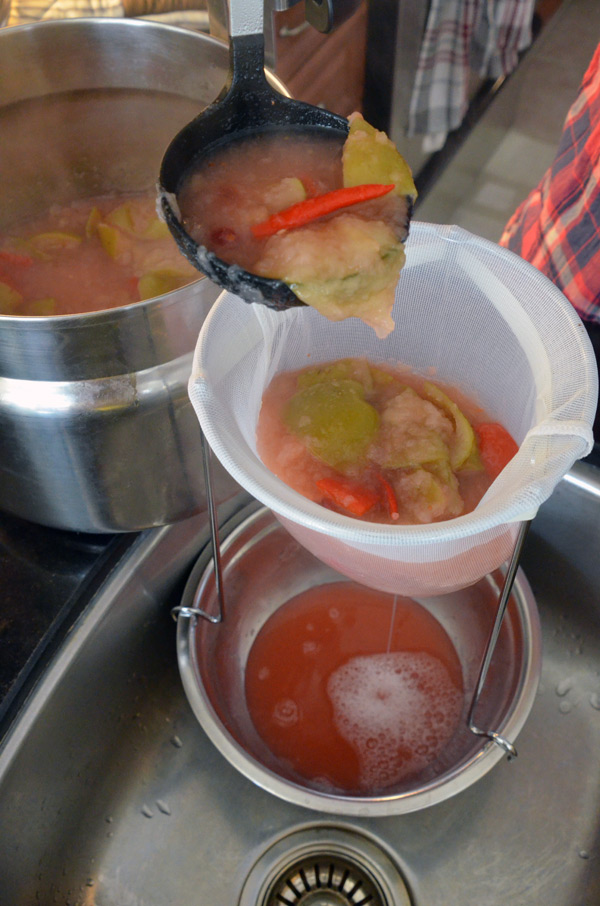 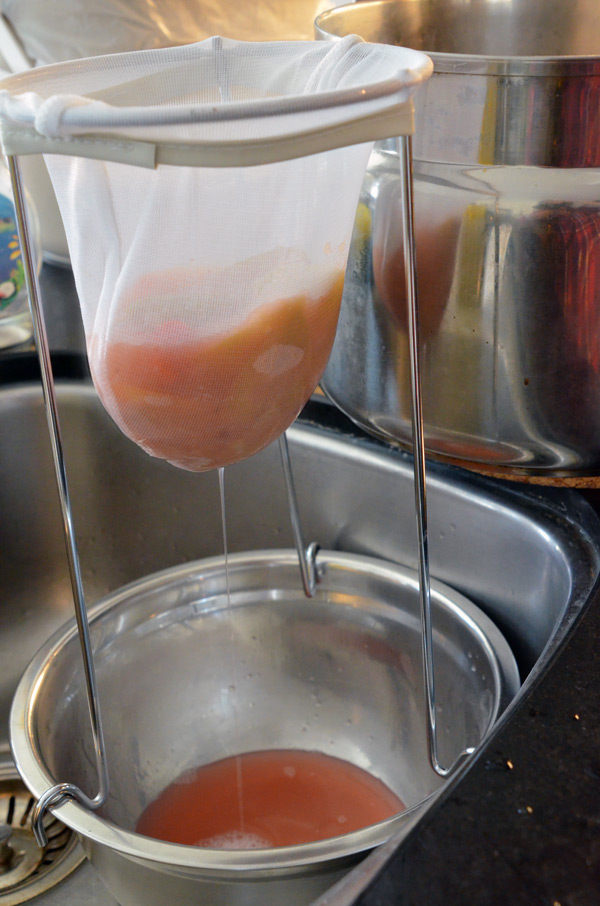 The straining is done in batches because I don’t think I can successfully pour everything into the bag. The process takes me about half an hour. I managed to get five cups of liquid (there’s a little more in the bowl, after I poured most into the measuring cup). 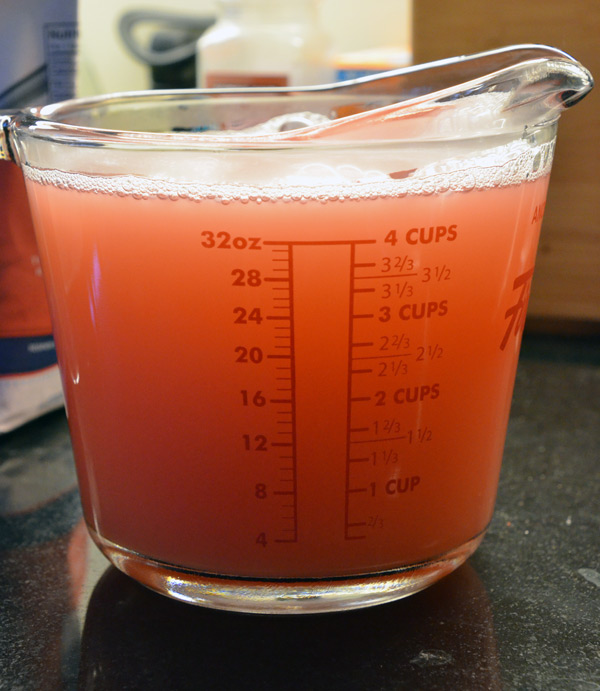 Pour the beautiful liquid back into the pot and add the sugar. Bring to a boil and don’t walk away! After all the work you’ve done so far, you don’t want to burn your liquid! Now this is the part in the book that says to boil until the jelly sets, which should take about 20 minutes. To do the set test, you place a small dish in the freezer in preparation, put a small spoonful onto the chilled dish, and place in the freezer. After about minute, push the jelly and if it wrinkles, it has successfully set.

Let me mention that last year when I made this, hubs was helping me. He was in charge of the boiling. I can’t recall how long it had been boiling for, but we ran out of patience and canned even though it did not pass the set test. Needless to say, I ended up opening all the jars the next day and re-boiling the mixture for God-knows-how-long.

So this time, I kept boiling the mixture until it passed the set test. I tested every 5 minutes. I think it took close to an hour of boiling before it set. Some people might find this soothing, but not me. After the 30 minute mark, I was getting impatient! I was certain that most of my liquid was boiled away and that I would only get a few jars, but I was pleasantly surprised. 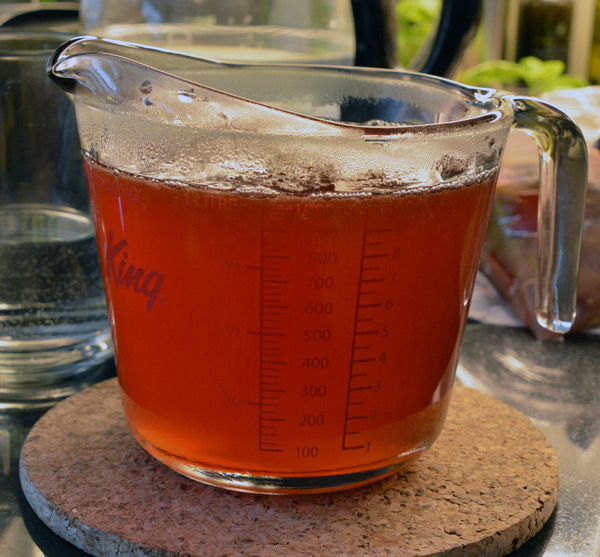 I still ended up with four cups of thickened liquid. Early I said that I didn’t have to start sterilizing my jars until later – this is why – because I had to stand there stirring this liquid for almost an hour!

I managed to fill 7.5 jars. I’m not sure if the 125 mL jars have a name (like the 250 mL jars are known as half pints). I haven’t opened the half jar yet, but during the testing phase it tasted great. Maybe it could be a little spicier, so next time I can either add more chili peppers, or maybe I don’t seed them.

The book has some other wonderful recipes, and the author does a good job explaining techniques. It is a great resource for any new canner.