On February 10th, hubs and I made our way across town to Pitchfork, which appears to be a similar concept to Le Depanneur in the west end. It’s a place where curious people go to learn about food. I signed us up because I have developed a love for fresh, homemade pasta, and I am interested in learning more. Hubs and I have been making what is known as long pasta – fettuccine, using my KitchenAid stand mixer attachments. Pasta making is quite an art form, and I was reminded of that at the latest workshop led by Sarah and Chris of Alimentari. They have both spent some years living and working in Italy, and now they are bringing their expertise back to Toronto. As they continue to grow their pasta business, they find time to put on fun, hands-on, informative workshops. 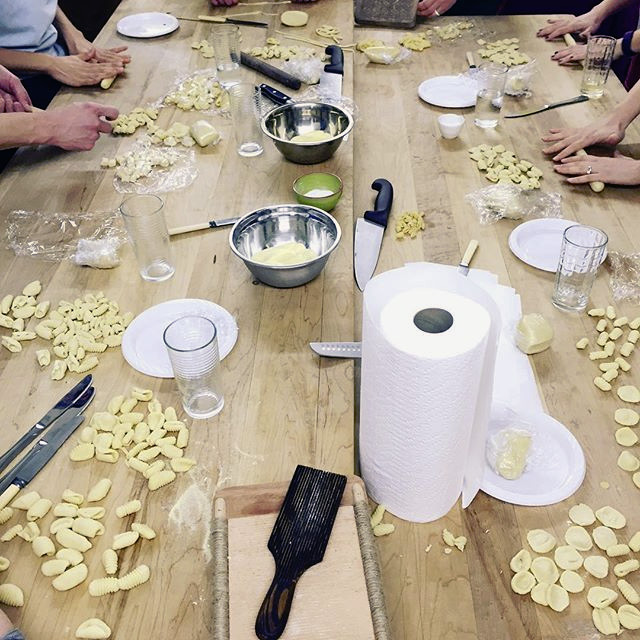 I was immediately intrigued when I walked into the kitchen. Bowls of flour were set out for each student, already pre-measured, along with individual measured out bowls of water. There were no eggs. The flour was a mixture of all purpose and durum semolina, also new for me. Using a fork, we blended the two types of flour together, and added a pinch of salt. Once the flour was evenly mixed, we made a well in the centre of the flour, still in the bowl, and poured in the water. Using the fork, we gently started mixing everything together until the dough started to take shape. Then the kneading began, one of my favourite parts of pasta making.

Depending on who you ask, you will get a different answer on how long the dough needs to rest. One friend told me 30 minutes, another recommended a couple of hours, but instructor Chris said it only needs 20 minutes. This is good news, making pasta making seem even easier.

We divided the dough into thirds. The hardest part of the process for me was rolling portions of rested dough into 1/4-inch ropes. Hubs and Chris both helped me out, otherwise I would be spending the entire evening trying to roll out my ropes! The first shape we learned to make was cavatelli, using a variety of butter boards (also known as gnocchi boards). We also learned that if you don’t have this at home, you could use a grater – creative! We also learned how to make orecchiette, which was not nearly as easy. Our orecchiette pasta did not look nearly as nice as the ones Chris made.

Mario Batalli has a great video demonstrating how to roll the dough into ropes, and how to make cavatelli pasta using a gnocchi board.

The instructor collected the pasta shapes we each made with the first two thirds of our pasta. The remaining third was for us to take home. The photo below is what hubs and I made and packaged up to take home. 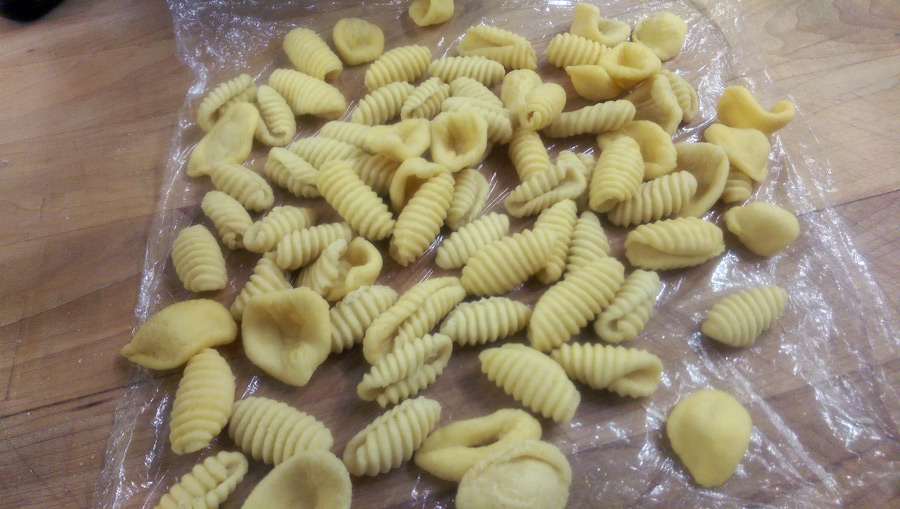 Sarah explained that the orecchiette pasta was from the Puglia region. I learned that different regions in Italy specialize in different pasta types and shapes. The north has traditionally been a richer region, hence the pasta is more commonly made with eggs. In the south, it is more common to have eggless pasta. The Italians take their pasta very seriously. Apparently they will scoff if you pair the wrong shape pasta with the wrong sauce. Since we made two different shapes, Chris and Sarah showed us the traditional sauces for each. The sauces are not at all complicated, but the freshness of the ingredients is key to creating a delicious sauce. 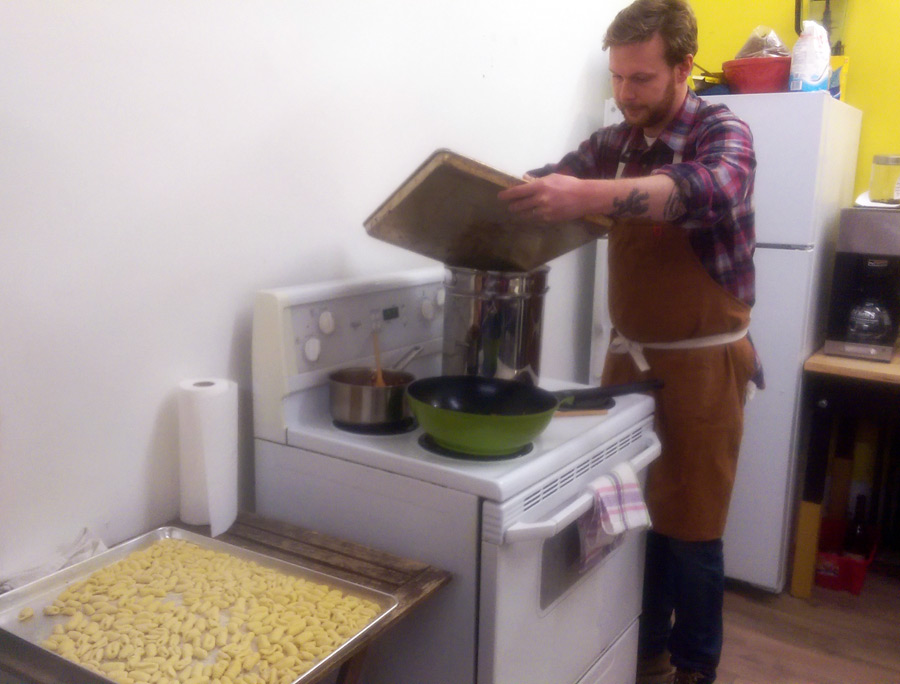 Paired with the orecchiette, Chris made a delicious meat sauce using Italian sausage (casing removed), rapini, olive oil, garlic, and loads of freshly grated parmigiana cheese. I also learned that pasta should be incorporated into the sauce, not scooped onto a plate and simply ladling the sauce on top. For the cavatelli, Chris used a can of Italian tomatoes, a generous amount of high quality olive oil, and garlic. Seriously, that’s it. You let it simmer for about 45 minutes while you are making your pasta. 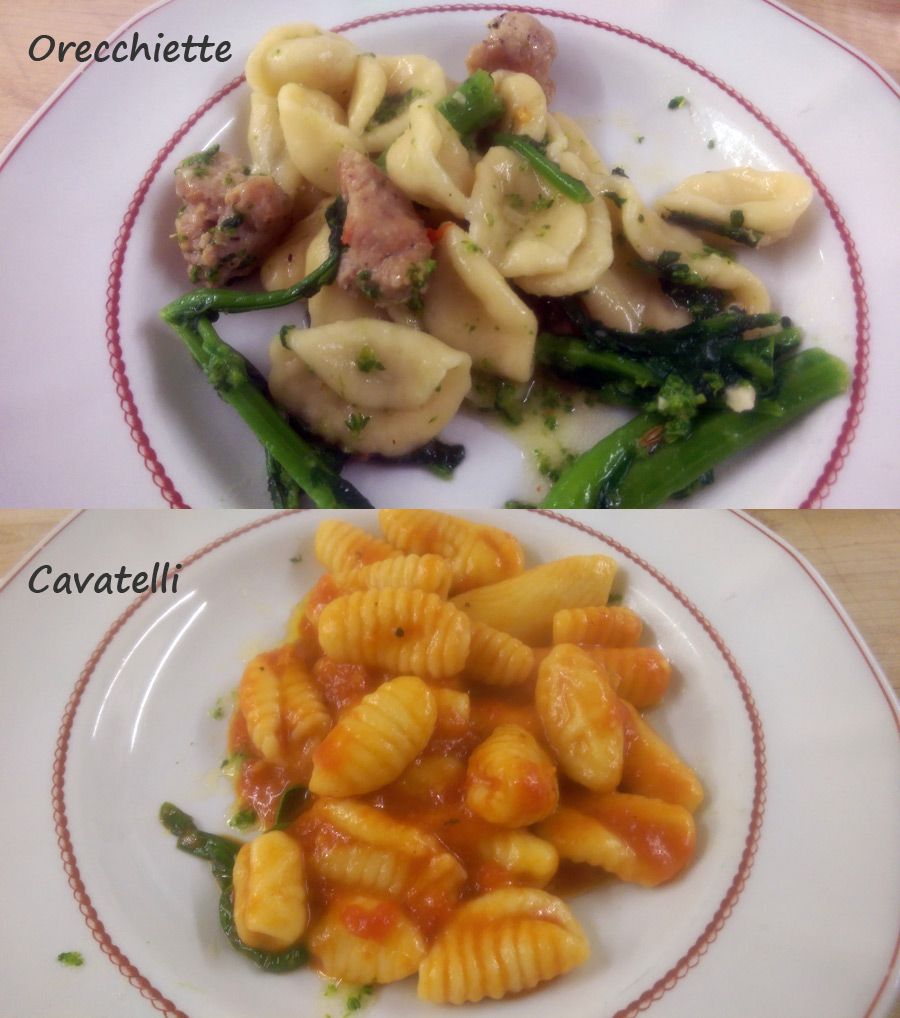 I am very much looking forward to our trip to Italy this year, and who knows, I may end up purchasing pasta making tools! Stay tuned for my next post, where hubs and I try our hand at reproducing the orecchiette dish at home.