Last night we had reservations at Shoushin, a high-end sushi restaurant in midtown, where hubs has read that fish is flown in fresh daily. The only other high-end sushi restaurant I have been to is Kaji, but that was so many years ago. It wouldn’t be fair to make a comparison now, simply because the experience was so different at Shoushin in that we had seats at the bar, directly in front of chef and owner, Jackie Lin.

Sushi is something that I crave every once in a while, most commonly when I get bored of meat. I have not tried every single sushi restaurant in the city, or even come close, but of the ones I have visited, it’s not necessarily the awesomeness of the sushi that compels me to return. When I am at a sushi restaurant, my order will range from udon, to a teriyaki salmon bento box, to nigiri, rolls, or chirashi. The most uncommon item I will order is nigiri, as I have often been disappointed without knowing why, until I started reading Rice, Noodle, Fish: Deep Travels Through Japan’s Food Culture, which explores Japan’s most intriguing culinary disciplines in seven key regions, from the kaiseki tradition of Kyoto and the sushi masters of Tokyo to the street food of Osaka and the ramen culture of Fukuoka. In the book, co-collaborator Anthony Bourdain expertly recounts his food journey through Japan. His words are mesmerizing and paint pictures in my mind that make me feel that I’m sitting with him, taking in all the smells and sounds that surround him in that moment. One crucial piece of information I learned about sushi is that it’s not about the fish.

Nigiri – ninety-five times out of a hundred, what Japanese eat when they eat sushi – comprises two components: shari, the seasoned rice that forms the base, and neta, the slice of fish that rests on top. Anyone can find great neta at Tsukiji, the reasoning goes, but only a shokunin (craftsman or artisan) can master shari.

Looking back, most of the rice I’ve had at sushi restaurants are a disaster, being either too hard, or mushy. My perception of nigiri was about to change. 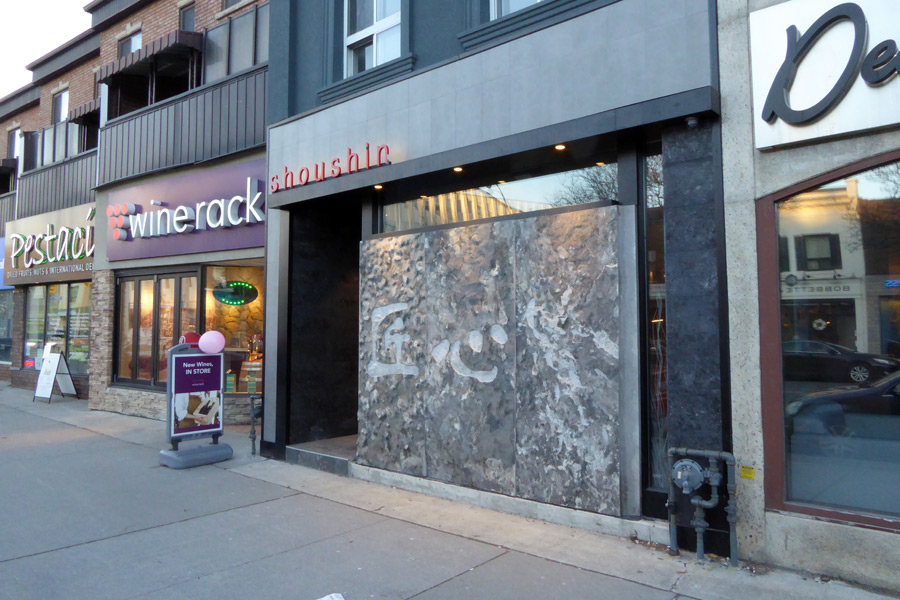 We found a parking spot right outside of the restaurant. I had no idea what to expect as I had not actually looked at any photos online, and you can’t actually look through the window. As soon as we entered, I felt calm and curious. The room is tastefully decorated and minimalistic, contributing to the zen-like atmosphere. The are some tables, but the bar is clearly the stage. The bar is made of a light-coloured wood and marble. Everything looks pristine and organized. We were greeted by a very pleasant hostess, and seated at the bar. There were three chefs behind the bar, and I was not aware that we were seated directly in front of Chef Lin – it turned out to be such a treat!

We were the first guests seated at the bar. My eyes were taking in everything. 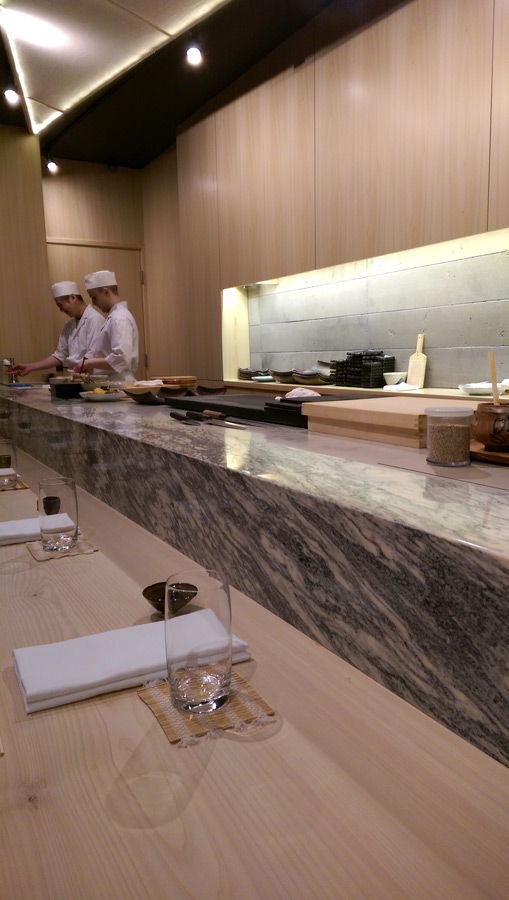 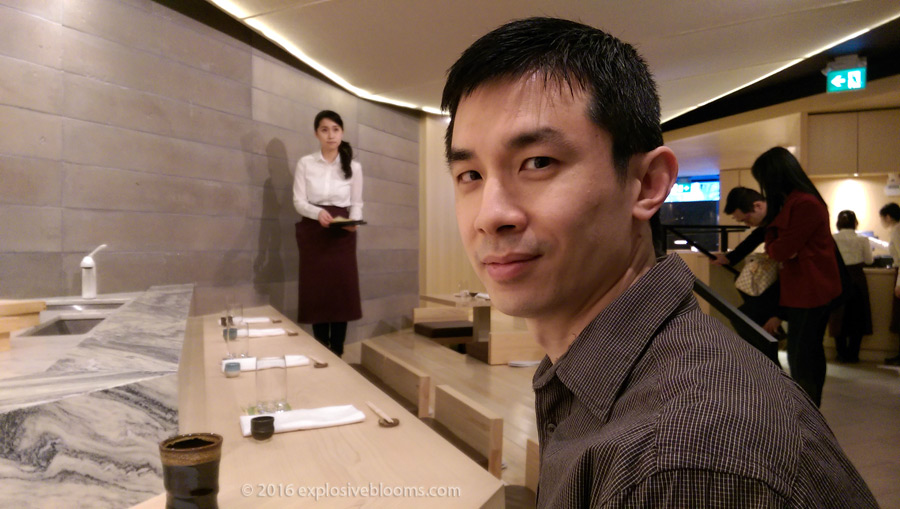 Once we placed our drink order, Chef Lin began to grate fresh wasabi, something I have never witnessed before. 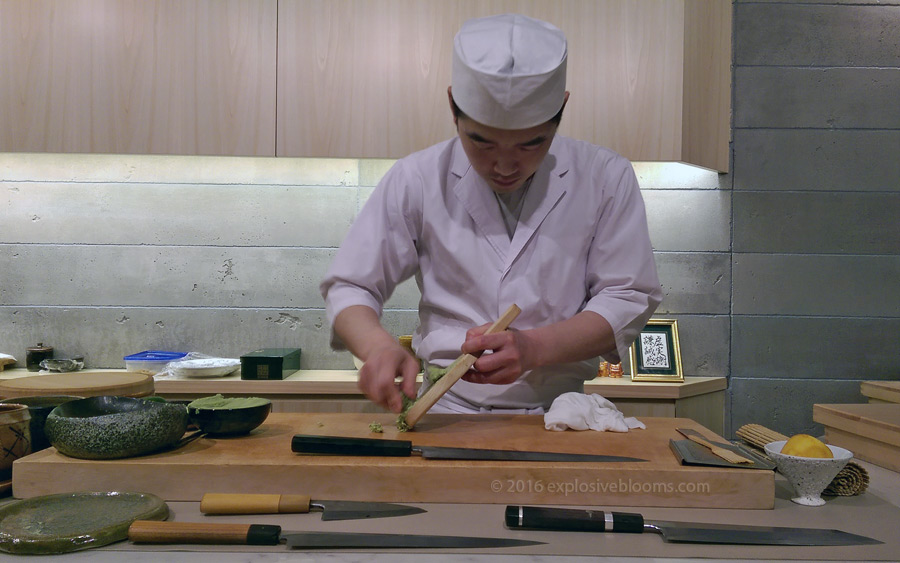 The restaurant is omakase, meaning I’ll leave it up to you. Your only choice is which tasting menu you want, $80, $120, or $250. We opted for the $120 menu. Unfortunately I am unable to recall the names/types of all the fish, so I will share our experience in photos. For this omakase menu, we started out with an appetizer. What I do remember of this dish is that the item on the left had a rice flour or tapioca consistency – chewy, with a small dollop of a hoisin-flavoured sauce. The middle ball was a shrimp ball, and the third item was a miso ball. It was all good.

Your senses are being excited. While eating, the flavours and textures can be surprising in a good way, and while you are eating, Chef Lin is “performing” by beautifully slicing fish with expert precision and speed. He’s also sharing bits of information and is more than happy to answer questions. 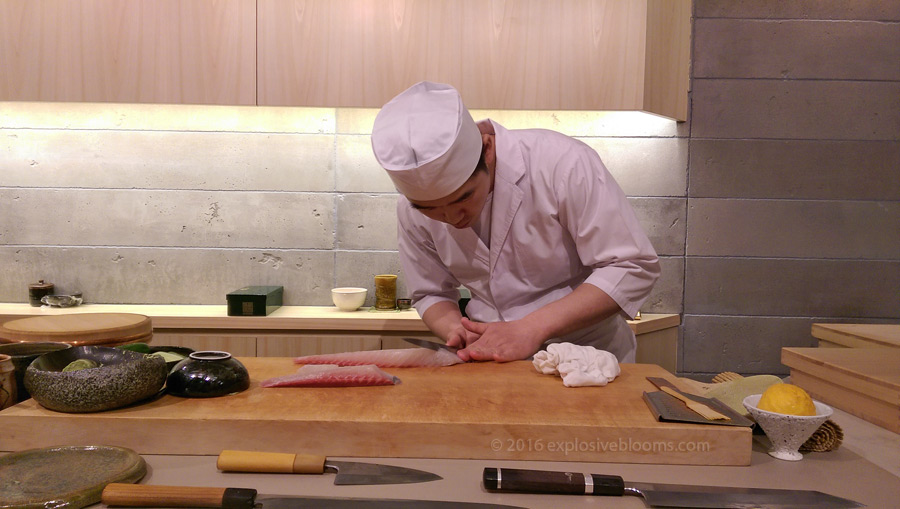 The next dish that is brought to us is artfully plated sashimi. The shrimp was sweet, and I loved the amberjack (right). The scallop behind the lemon is Hokkaido scallop, and are known for their sweeter flavour compared to North American scallops. Before we started eating, Chef Lin explained that we should use a little wasabi and dip into the soy sauce before putting the fish in our mouth. It’s not advised or common to mash the wasabi in the soy sauce, which is what most people do in North American, run-of-the-mill sushi restaurants. 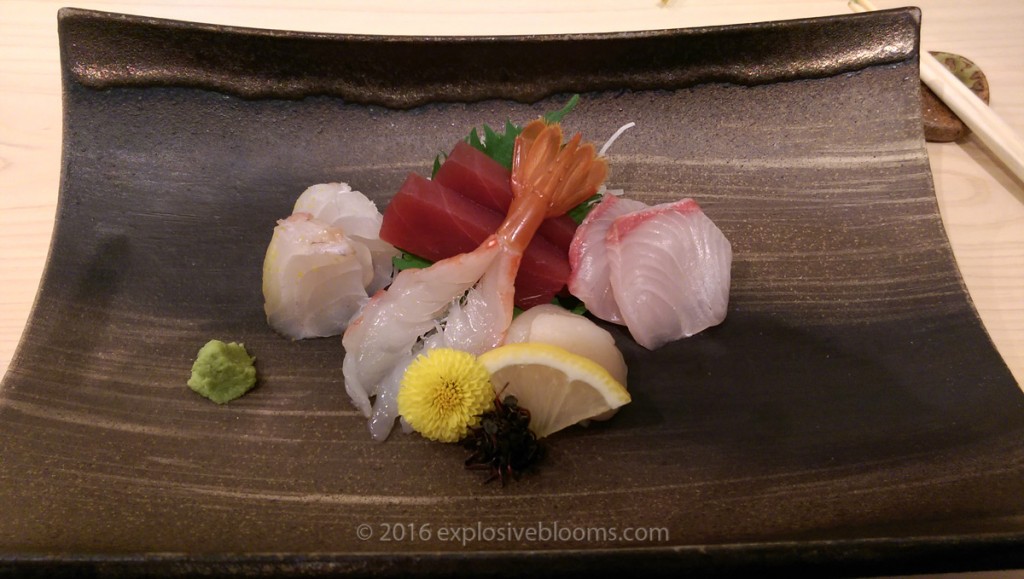 This was followed by another appetizer of black cod and mushrooms in a light broth. Also delicious. 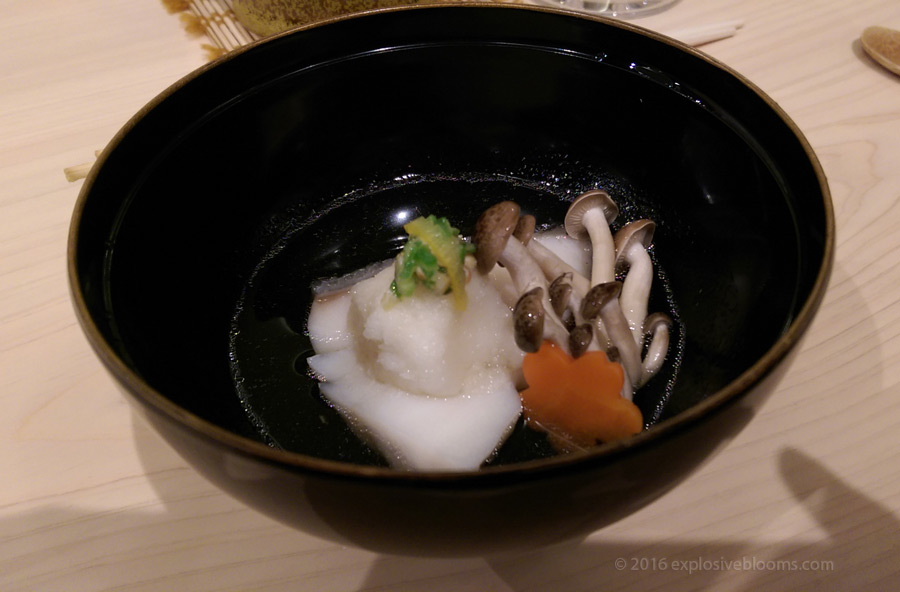 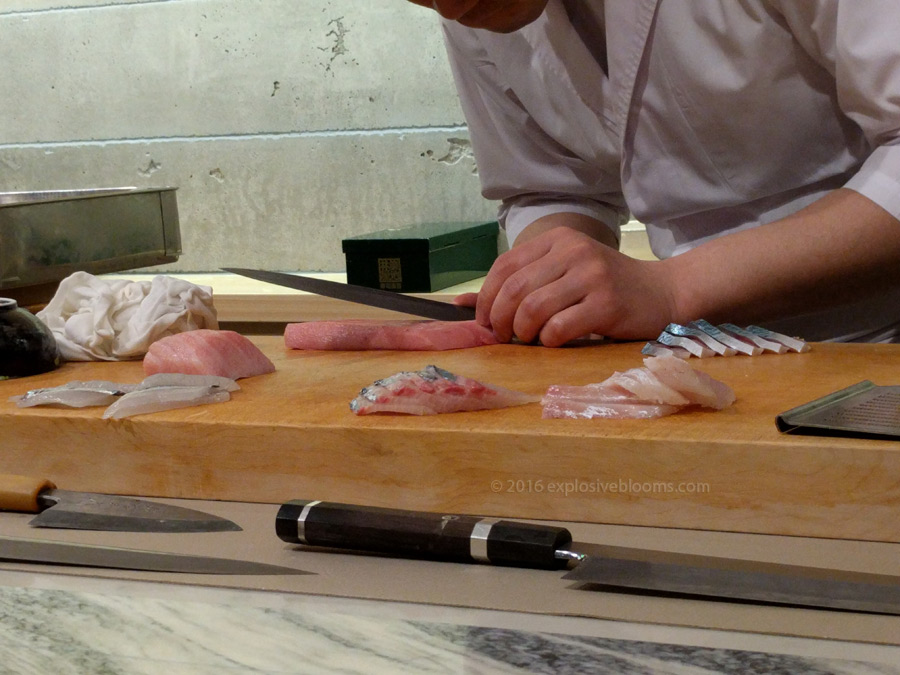 The miso soup that followed would be the last dish before the sushi. 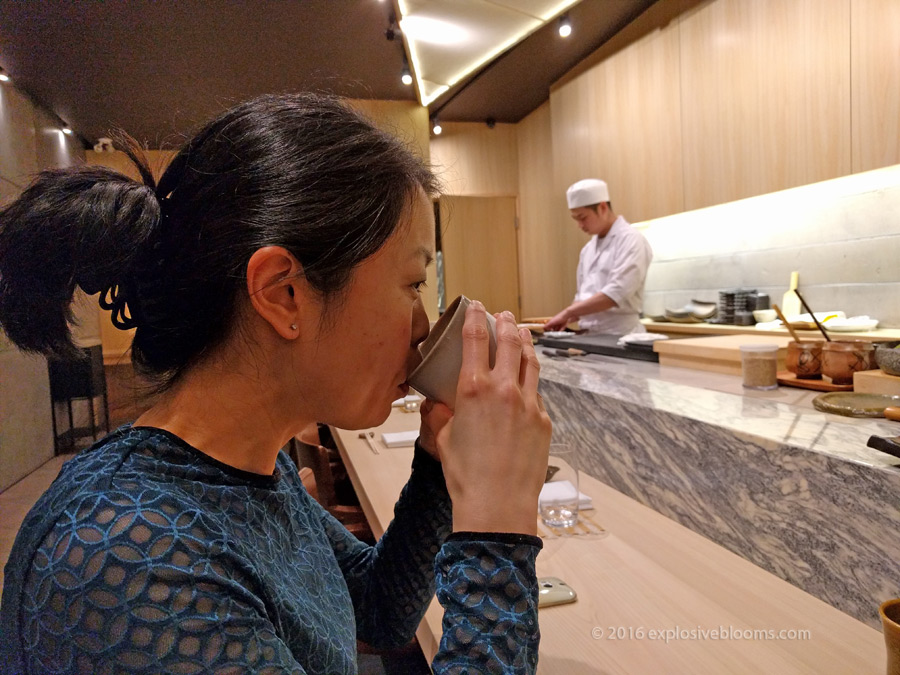 From this point on, it’s a visual affair, so enjoy! I want to mention that I asked Chef Lin about the rice after my first few pieces, because I noticed his technique of shaping the rice, and how the texture of the rice was phenomenal. It was not hard-packed, nor was it soggy as you can see in the photos below, and the seasoning was nice. He took the compliment and agreed that sushi is about the rice, and admitted that his rice is on the more acidic side. The style of rice a chef makes, dictates the type of fish used. What is also interesting here is that you are not given a plate of soy sauce and a dollop of wasabi. Chef Lin already adds a little fresh wasabi, and he seasons the fish just before setting the plates on the bar in front of you. And apparently in Japan, people pick up the piece with their fingers, not chopsticks. My kind of eating! It’s also suggested that you eat the nigiri as soon as it is set before you, because temperature affects the taste. You basically have 10-15 seconds to pop it in your mouth for optimal flavour. The guy sitting on the other side of me made the funniest comment. After Chef Lin shared this tidbit of info, he said that based on that logic, he should likely just be throwing the sushi that’s been delivered, straight into the bin! The final suggestion is that you turn the nigiri upside down as you place it on your tongue, so that the fish is sitting on your tongue.

Without further ado, let your eyes feast on these! 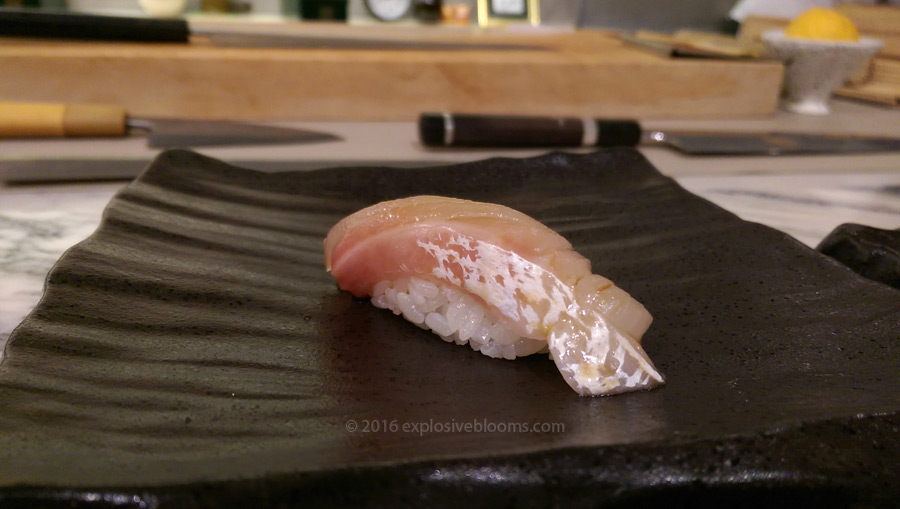 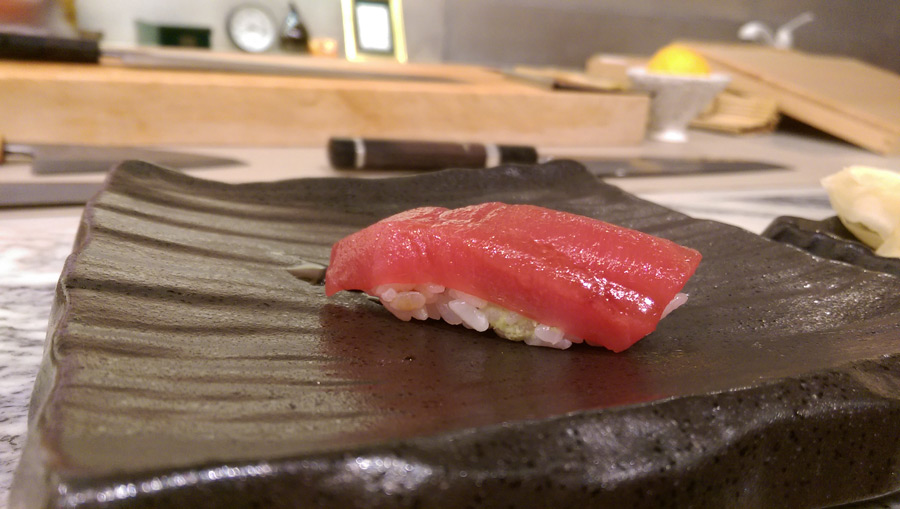 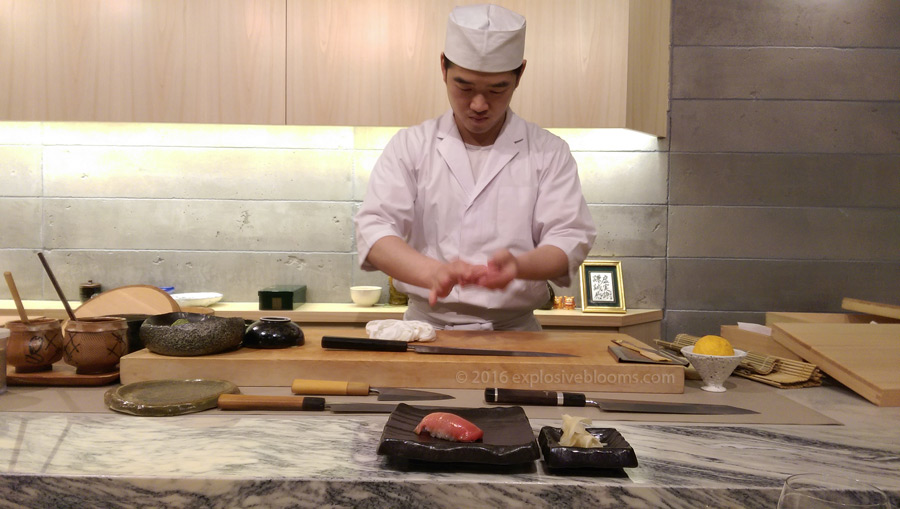 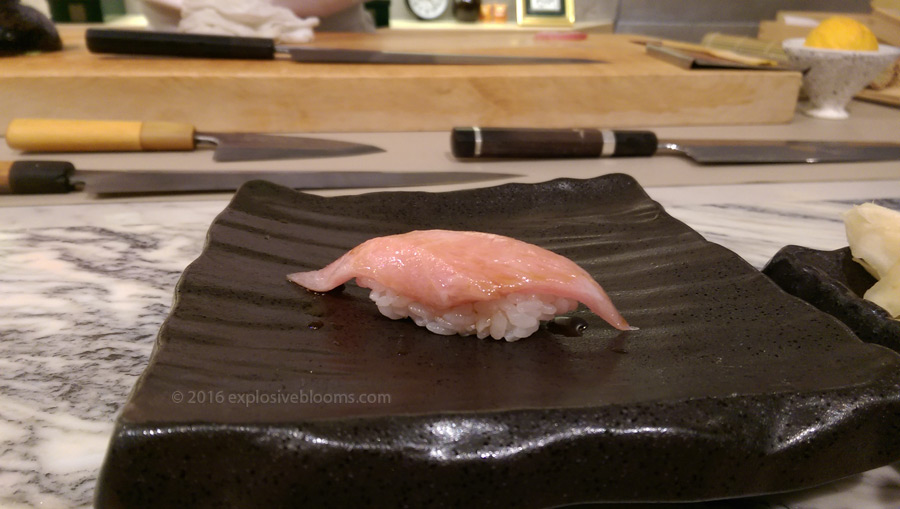 The freshly grated lemon zest on this next piece added a wonderful dimension. 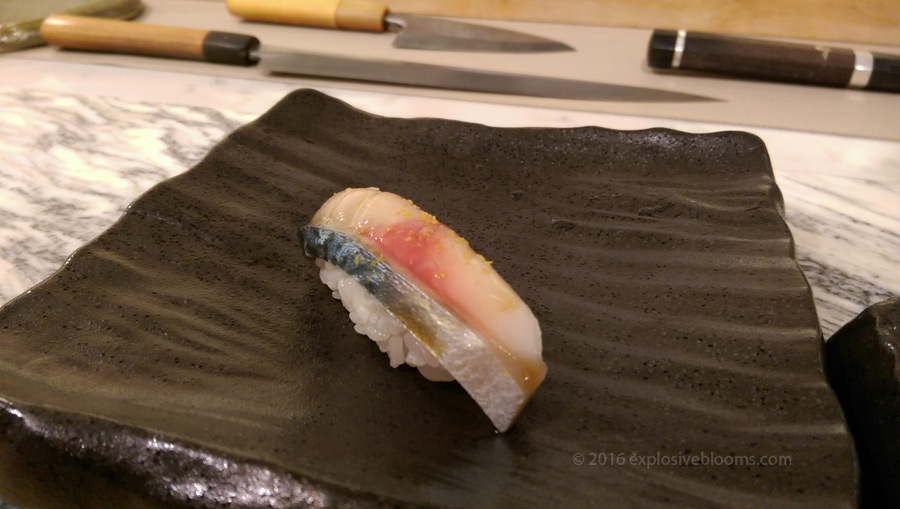 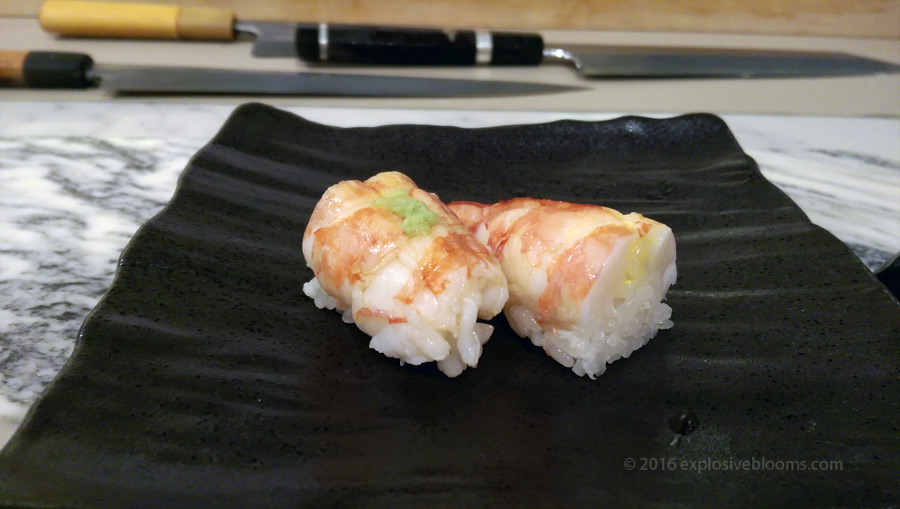 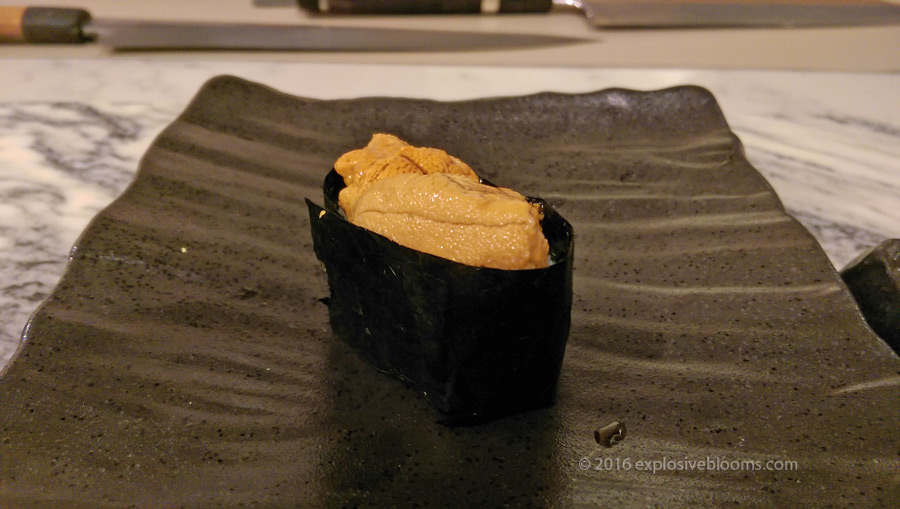 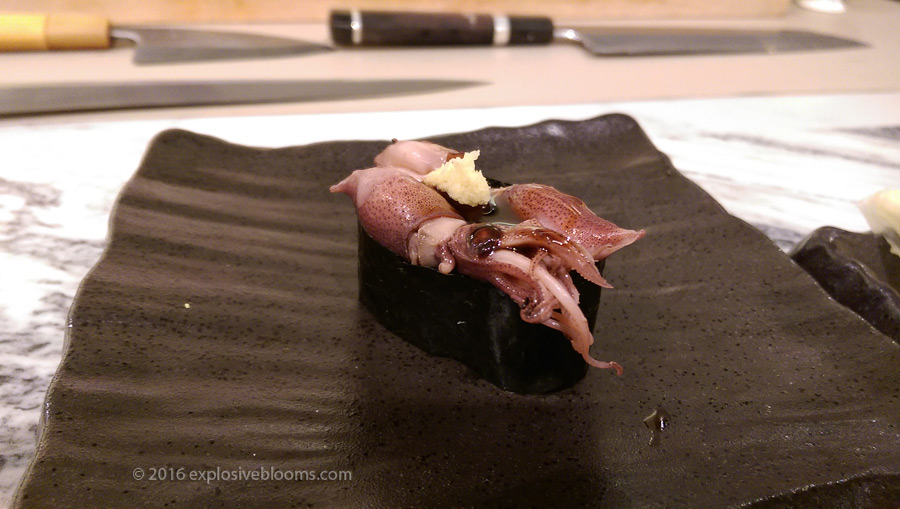 I pause here to mention that this piece kind of freaked me out, but I didn’t want to be rude, so I ate it. It’s firefly squid and although it’s palatable, I don’t think it’s something I would order simply because the texture isn’t my favourite. Not to mention, this was a tricky piece to get into my mouth in one go. 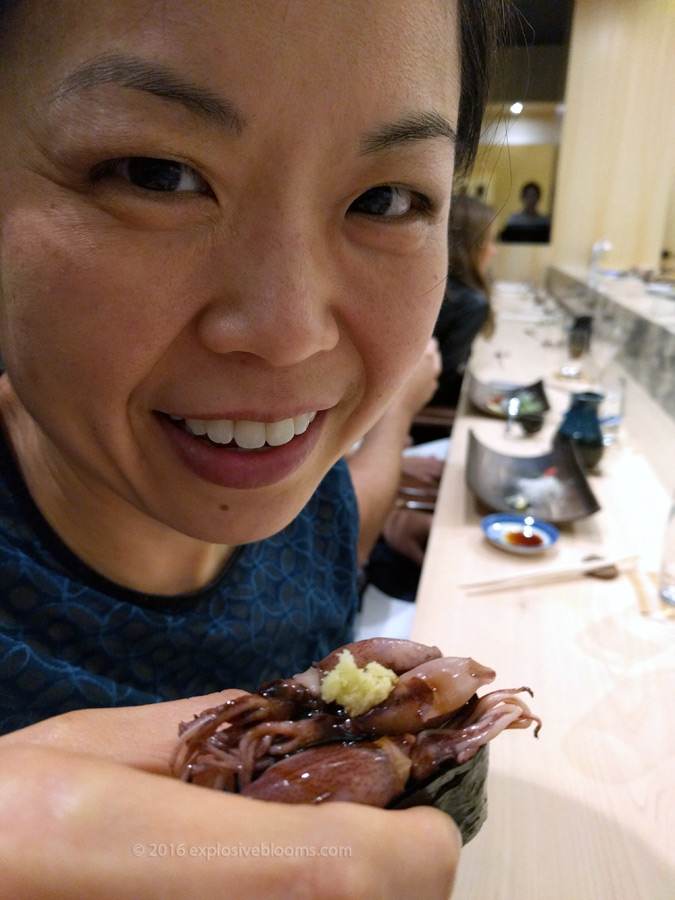 I believe this was the last of the sushi; however, Chef Lin will offer you extra pieces if you are still feeling adventurous. We opted to try four more pieces each. 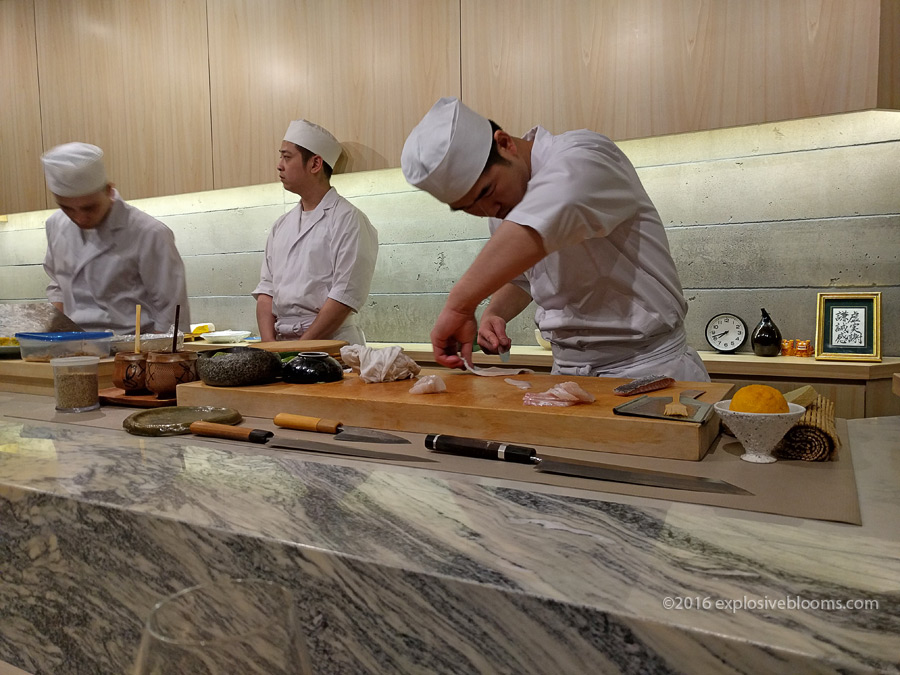 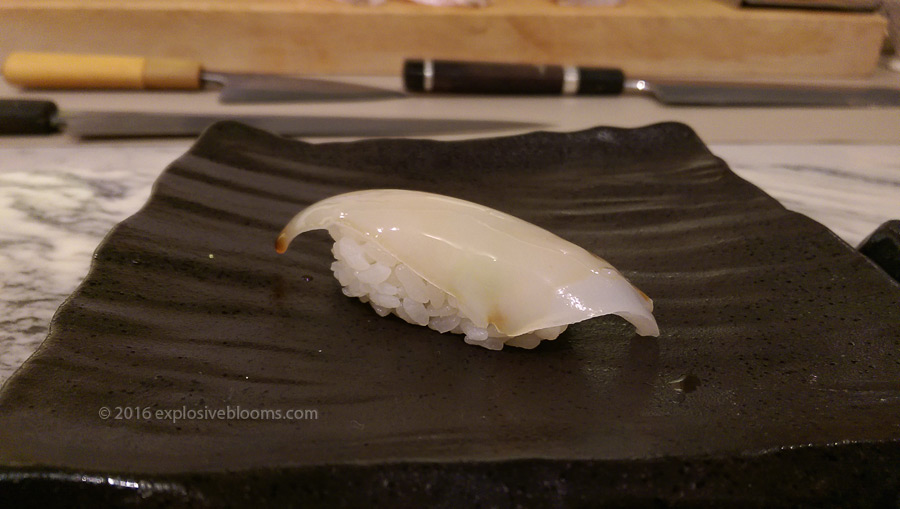 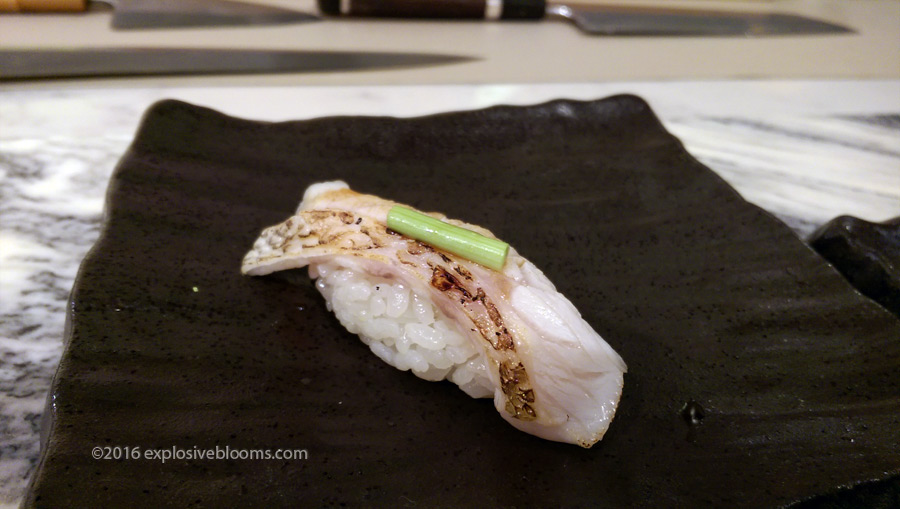 This next piece with Kohada completely blew me away. Apparently it is only available at two restaurants in Toronto – this place, and Zen. If you ever get a chance to try it, do not pass it up. 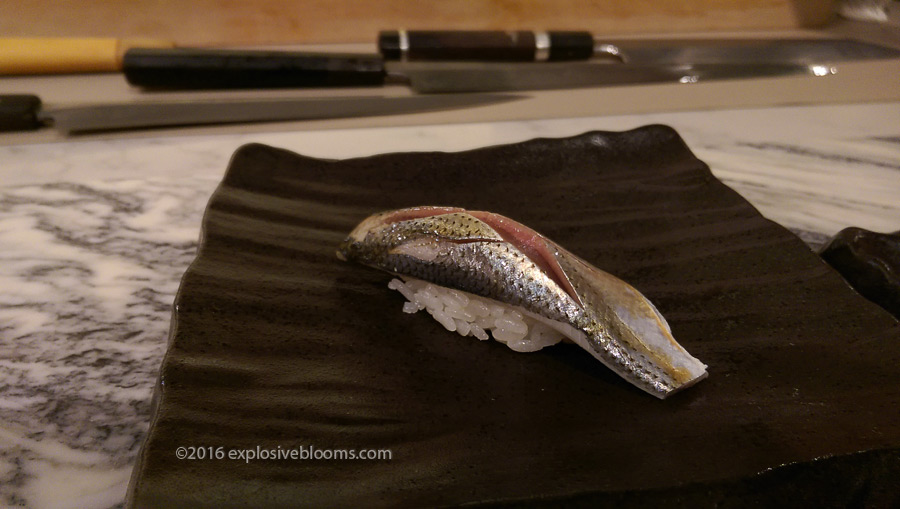 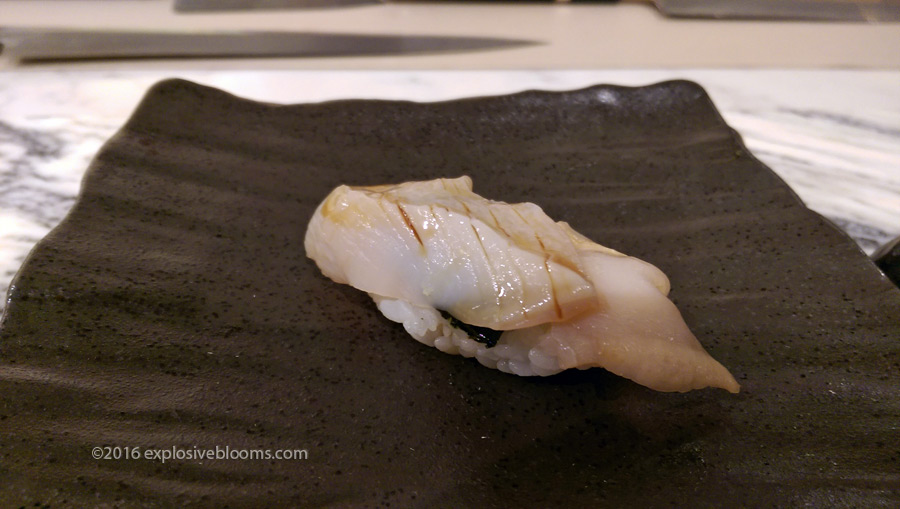 Dessert was your option of pudding – hubs got the green tea pudding, and I tried the black sesame pudding. They were light and not overly sweet, so a great way to end the meal. With the wine, and the extra pieces of sushi we added on, the bill came to $470. It’s a hefty price, so we will have to reserve this spot for special occasions only. Between this experience, and reading the Rice, Noodle, Fish book, I’m tempted to book a trip to Japan. I’ll happily eat my way around the country.