It was 6:00 pm when I texted hubs to find out if it was raining. The shop is very much a basement bunker, and my office is windowless. There could be a tornado outside, and I’d be oblivious. That’s why I texted hubs, because I have been taking advantage of the better weather, and biking to work. The response was, “No. I’m here.” I quickly packed up my stuff and raced out the side door to the alley. There was my hubs with his bike, waiting for me. What a fantastic way to end my work week!

The ride home was quite the workout. The winds had picked up, and at one point, it felt like I wasn’t getting anywhere. Head wind is brutal. Thankfully, my ride is flat. And at least it wasn’t raining.

When we finally arrived home, I was famished, so hubs suggested we go out for dinner. We agreed on sushi, and I suggested Sushi Nomi. There were not very many reviews, but the few they had were all positive. After our experience at Shoushin, I have been in search of good sushi at a reasonable price. Standing in front of Sushi Nomi, we realized that this place was tiny. There was no indication of this on their website or the reviews. This place likely is popular for takeout. There is bar type seating for seven people in the shop, but not sushi bar (sitting in front of the chefs). We quietly decided that it might be easiest to get take out. I noticed Amberjack on their special’s board, so as we placed our order, I asked for two pieces of Amberjack nigiri. The guy working cash turned to the chefs and started speaking to them before informing me that my order already included Amberjack. Did I want extra? I asked for another recommendation, and agreed to the Mackerel. He asked if it was for here or to go. Hubs immediately said for here. We already paid for parking.

We seated ourselves and poured ourselves some tea. The miso soup that hubs ordered, and my salad, were nothing out of the ordinary. But when our mains were placed in front of me, I was impressed! I had never seen such a beautiful plate of nigiri at any of the regular sushi restaurants I’ve been to. And more importantly, the fish is already seasoned with their house-made soy sauce.

This is what I was expecting, which is what most places serve up (Sushi dinner, $16.95): 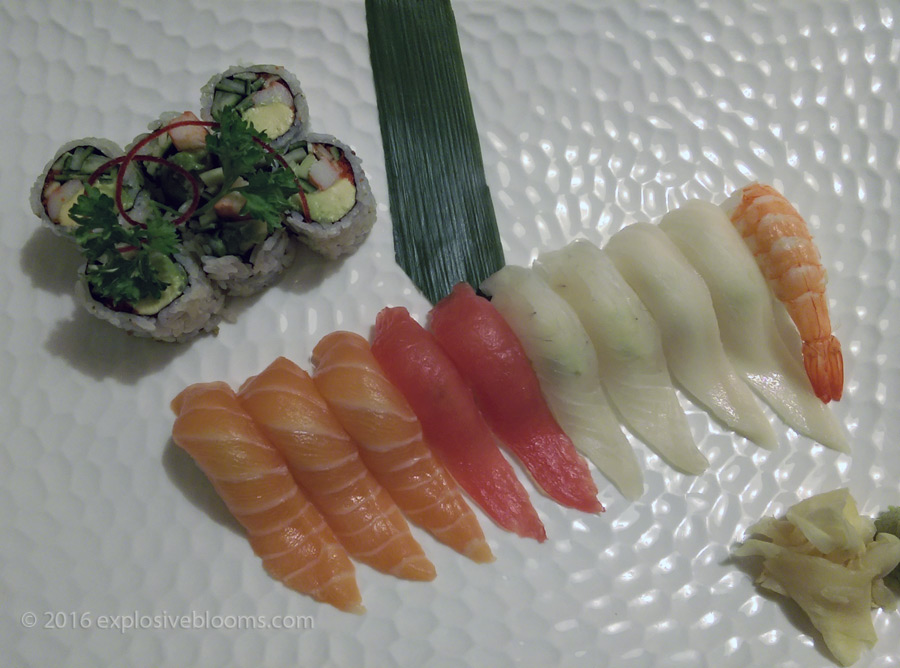 This is the Sushi Saiko I ordered tonight, which includes 9 pieces of nigiri and a spicy tuna roll ($20). The roll came separately, after I finished my nigiri, which I was instructed to eat from left to right. Just look at the selection! The two pieces on the blue plate were the mackerel, which was really good. Hubs liked the wasabi at Nomi for the reason that made my eyes water – it’s incredibly strong stuff here. 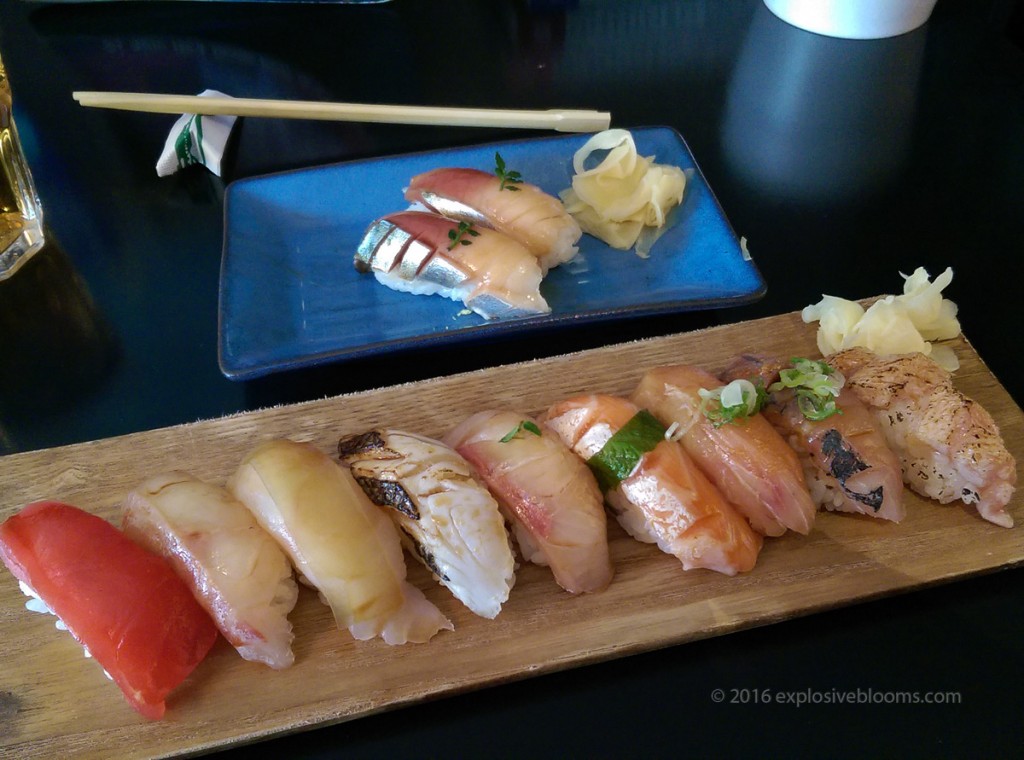 Hubs ordered the Chirashi. He usually does when we go out for Japanese. This is what typically arrives (Chirashi Dinner, $17.95): 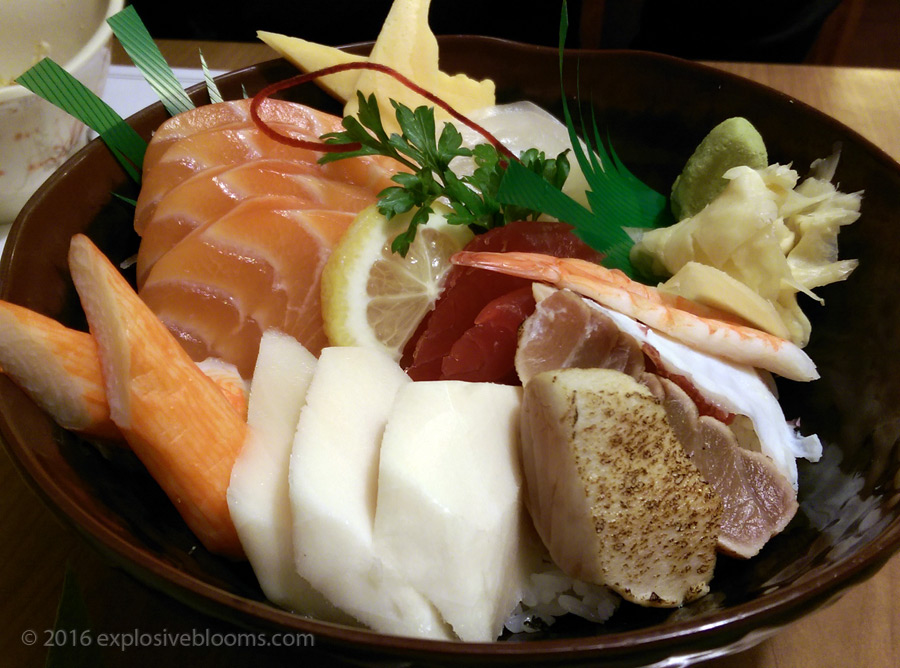 Tonight, this is what was put in front of him (Nomi Chirashi, $15). Note that at Nomi, there are four different types of Chirashi you can select from. The other three options are tempura, salmon only, and assorted spicy. Again, the selection is more interesting, and it includes various fungi). 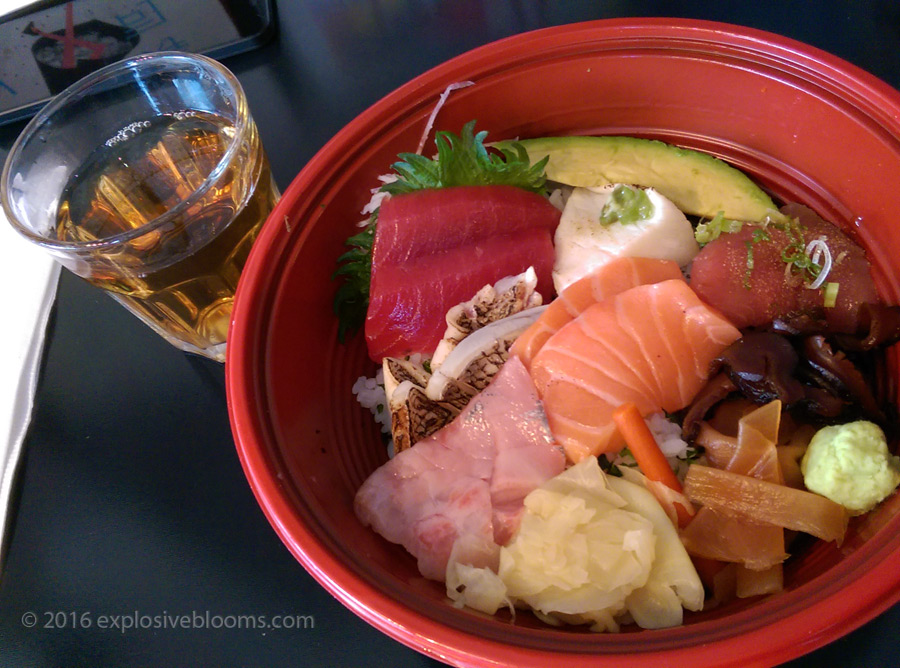 The rice here is worth mentioning – it’s good texture. It holds its shape well (nigiri), and once in your mouth, it falls apart nicely and isn’t hard or mushy.

I’m glad that we discovered this place. I have a feeling we will visit again, but maybe we’ll call ahead and get takeout.