I just woke up and found out that it’s been stinkin’ hot back home, so I am now extremely concerned about my garden.  I am having fears that everything is baked and wilted, based on some comments I have read from others about how the extreme temperature swings have affected their gardens.

The Sorrento Food Tour that we went on yesterday was only ok.  I had hoped that it was going to be similar to the food tour in Sevilla, Spain.  The difference between that tour, and Sorrento Food Tour was that on this tour, we had more baked goods/sweets, and free samples.  On the food tour in Sevilla, we sampled more cooked foods, and in bigger portions, and we also sampled drinks at each location.  By the end of that tour, I was buzzed and so stuffed.  Cyra had also provided more history and interesting stories and folklore about the different place we visited, which I found incredibly interesting. Yesterday’s tour was still enjoyable enough, walking through the lemon grove and sampling the limoncello.  I think it would have been nice to have some seafood as well. For the price of €74, I expected better food samples and a more enthusiastic and engaging guide. I should point out that the limoncello samplings are free to the public, and walking through the lemon grove is also free to the public. It’s good that this was part of the tour because limoncello is part of Sorrento’s culture; however, it’s free! For those with a sweet tooth, we also stopped at a candy shop, Confetti & Agrumetti, and met Antonio, the eccentric candy man. 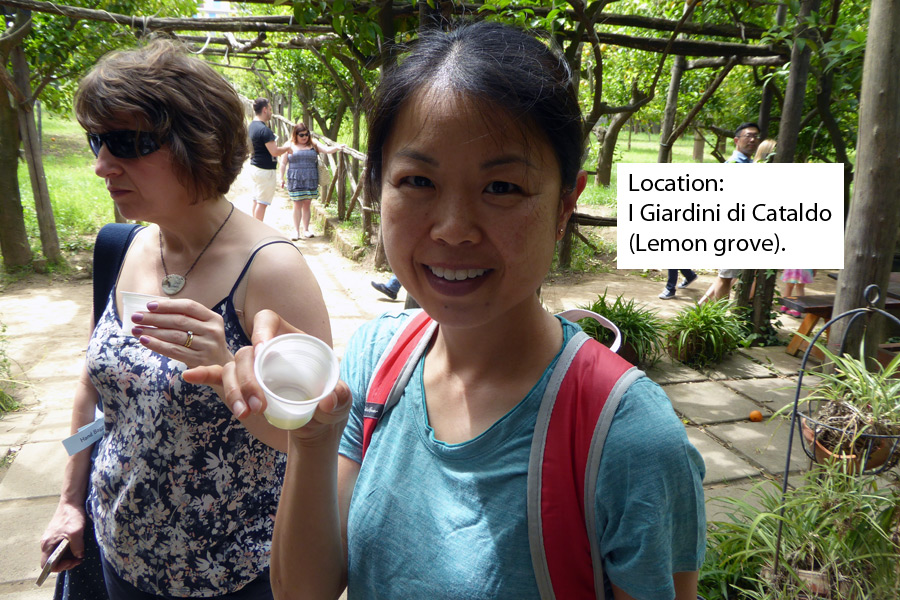 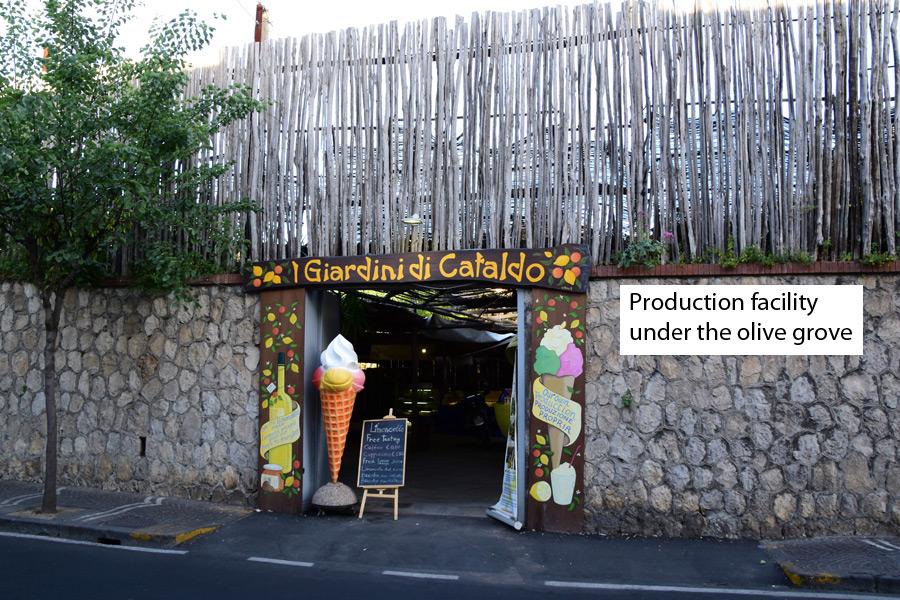 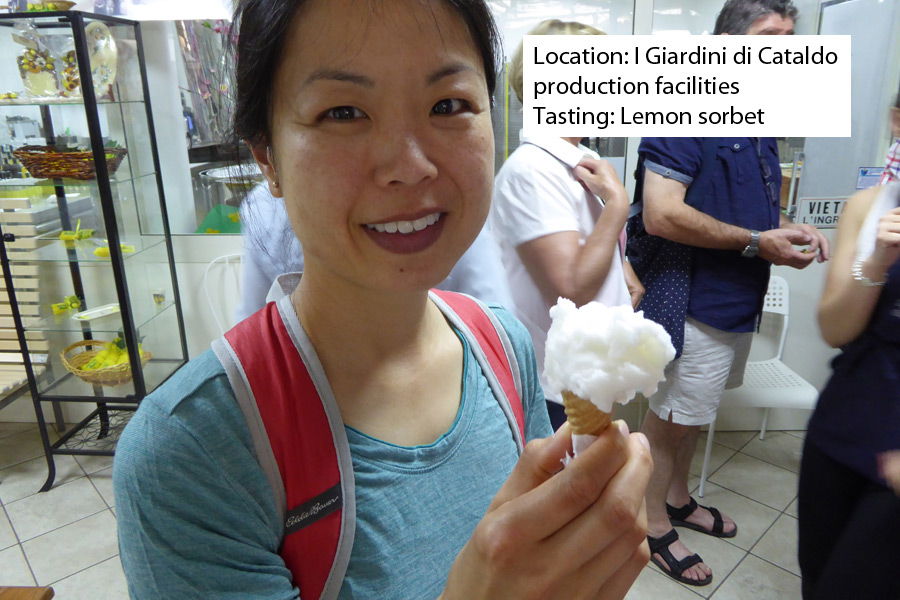 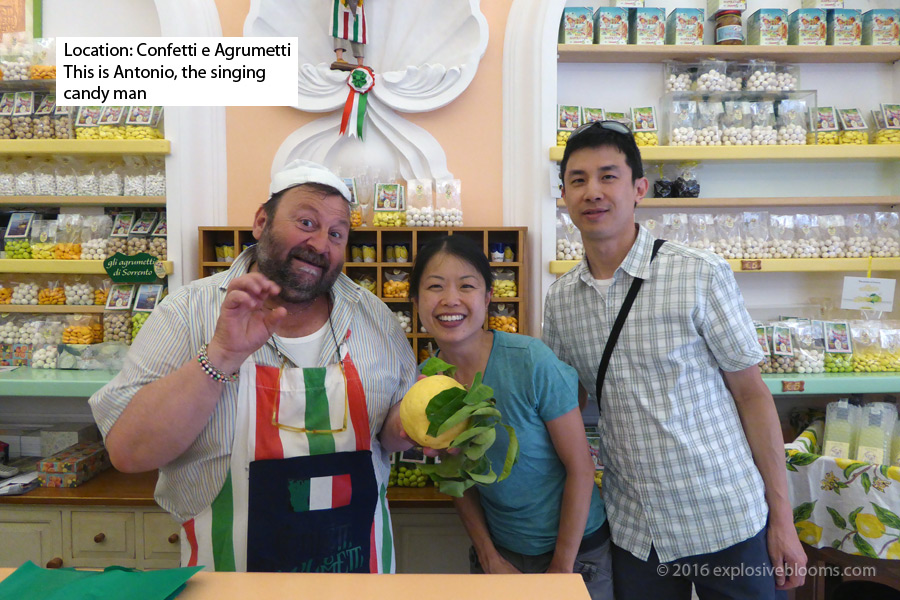 After the tour, hubs and I walked around a little more, stopping for a café, and stopping in at the tourist office to see if there were any practical evening tours we could join.  We went back to our apartment to review, and I snuck in a 15 minute siesta.  We came up with a tour plan, but it didn’t work out, so we wandered down to the marina in search for some photo ops before heading to dinner. There are not many evening tours offered from Sorrento. On our first night in Sorrento, we walked passed a restaurant called Bagni Delfino.  There was a sign on the door that said that they will only seat those with a reservation.  So last night, we asked our concierge if he could call and make a reservation for us.  He tried calling several times, but no answer, but suggested we just walk in anyway.  I dressed up because I figured that could help with getting a seat, and we also opted to get there before the Italian dinner hour.  We walked in just after 6:30 pm and were asked if we had a reservation.  They still seated us, and we got a great spot on their pier, right next to the boats! 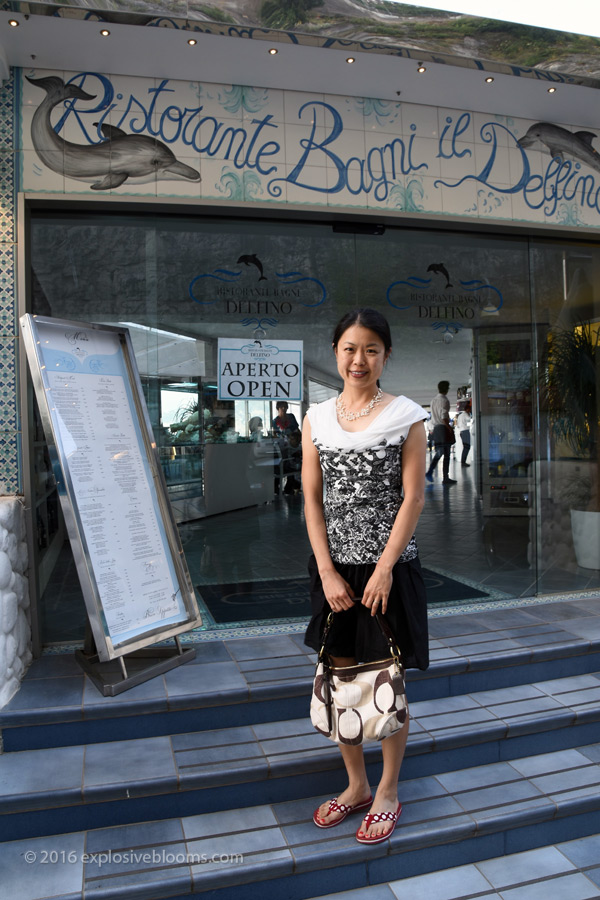 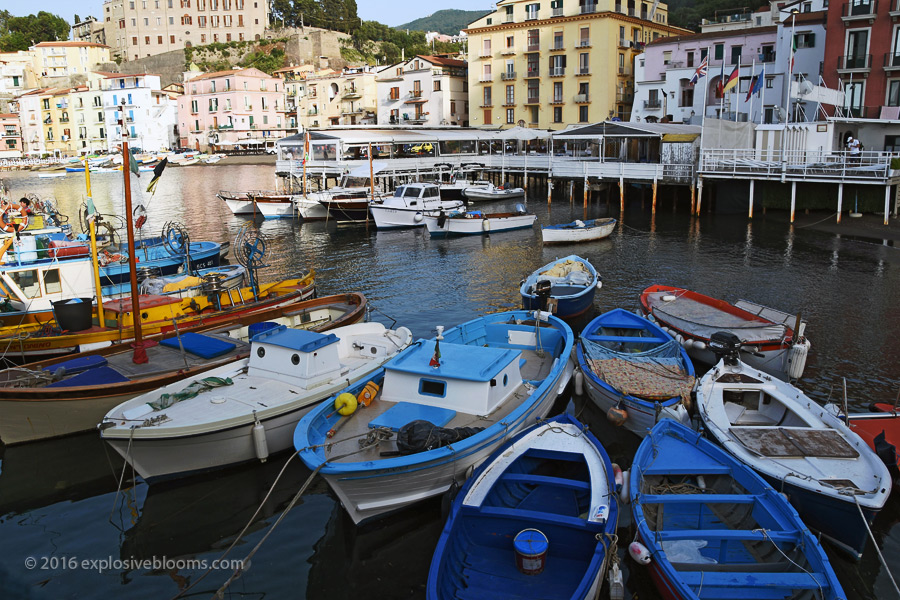 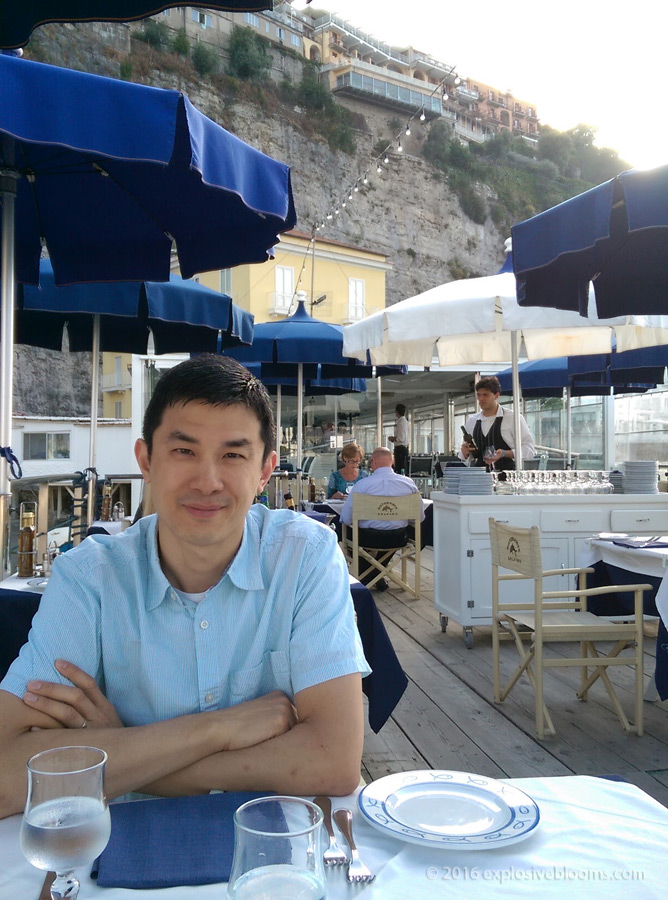 We ordered SO MUCH FOOD.  I’m sure the waiter was amused.  Hubs thinks he cut us a break on the bill.  The food was so delicious, especially my massive seafood pasta dish. The shellfish were piled high.  We had also ordered a sea bass to share, thinking or hoping it would be no more than 1kg.  The fish they brought out was much larger, maybe closer to 3kg, but we almost finished it.  The only dish we were unable to finish was the grilled vegetables.  We finished the meal with a complimentary limoncello, and we ordered a café.  We were stuffed, which is the norm here for us. 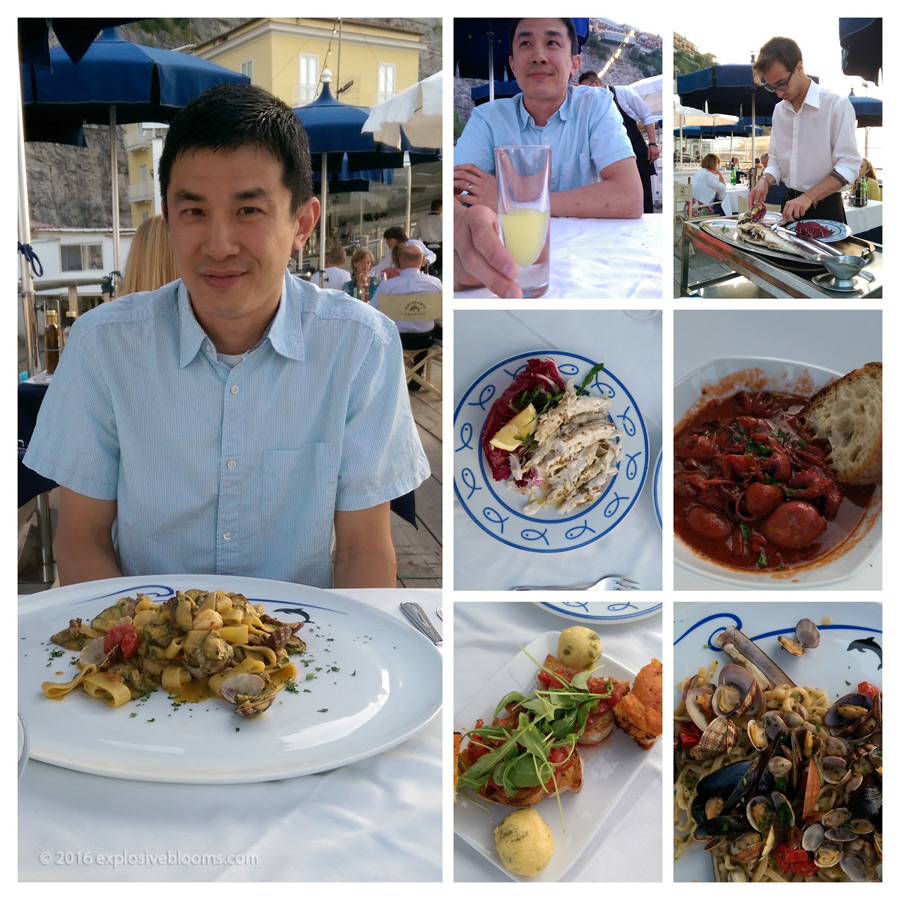 Today, we grabbed a croissant each, and a cappuccino for breakfast before making our way to the meeting spot for the pizza making.  The driver was 20 minutes late (Italian time), and it was our first taste of the roads in the area.  He zipped around the narrow, winding, cliff side roads.  Up and up we climbed until we reached the village of Schiazzano in Massa Lubrense where we entered into a beautiful bed and breakfast, Lubra Casa Relax, which was once a pope’s home way back in time.  We were greeted by owner Lucia (I affectionately think of her as Mama Lucia), the cutest and sweetest Italian lady. She graciously offered us a beverage and sweet pastries while she set up the kitchen for us.  After her demo on how to make the dough, we were set to work.

The dough is much stickier than pasta dough, and although I thought my ball was pretty good, after feeling her dough, mine was nowhere close.  It’s very important to add enough water at the start, and not after you’ve already started kneading.  The problem is that the amount of water for each of our portions was not pre-measured.  Our dough ended up in the bin, only because it’s not useable same day.  Mamma Lucia had pre-made dough earlier for our pizzas because the dough requires up to 24 hours of rest time. 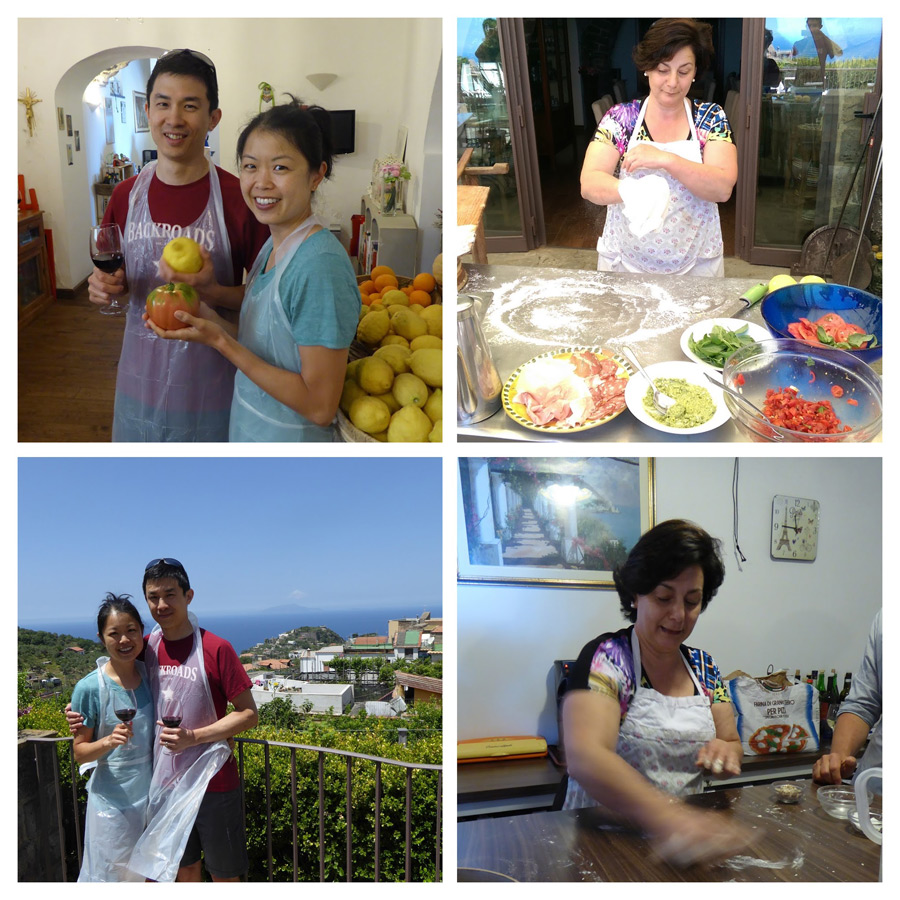 Mamma Lucia had us help her divide her rested dough, which now required another 20 minutes of resting.  During that time, she started to prepare the bruschetta, and caprese salad.  The red wines were opened, and we were seated at the outdoor table.  When we finished, the dough balls were ready to be turned into pizza.  She made it look so easy, and hubs was such a natural – Mama Lucia even asked him to stay and be her helper for the summer – whereas I was a disaster.  Stretching out the dough was tricky and I ended up with a tear.  I guess this just means that hubs will have to be the pizza maker!  The outdoor oven is fantastic.  It reaches 400C/800F and the pizza only requires 2 minutes to cook. 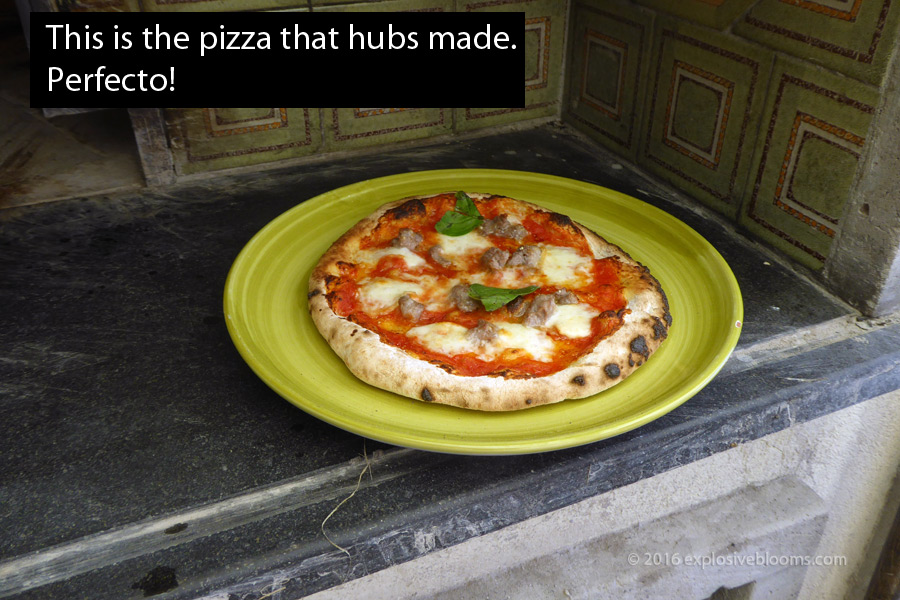 We were stuffed, but the meal wasn’t over yet.  Mama Lucia made us some Nutella pizza for dessert, followed by her homemade limoncello. None of us wanted to leave after lunch. That’s how much we were enjoying ourselves. If you’re ever in the region, and want to learn how to make authentic Sorrento pizza, sign up through Ciao Laura. We learned that Laura is based out of the USA. She collects the money while Lucia does the work, but at least Mama Lucia seems to enjoy teaching and interacting with people. The one-day class is called Pizza al Forno, and it is worth the €100 per person. So far, this is our most favourite non-biking activity on this trip. It absolutely exceeded my expectations, and I’ve learned the secrets to making delicious Sorrento pizza. 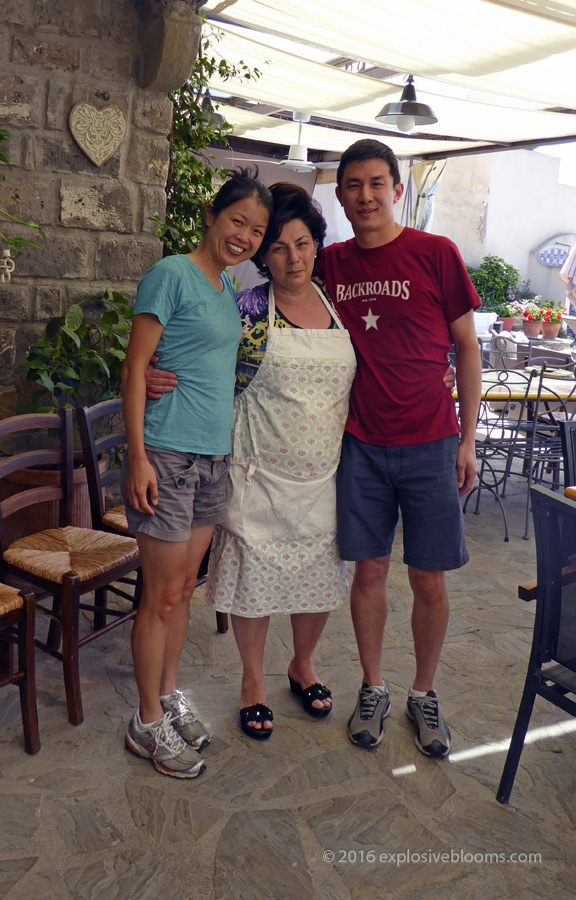 We returned to Sorrento at around 3:00 pm.  Hubs and I walked back to our place and it was time for a little rest.  I’m telling you, all the wine and digestifs means naps are necessary.  We made sure to get up and out in time to take advantage of the good light for our photos.  On the drive up to Mama Lucia’s, we realized that we could walk up the same road and have amazing views of Sorrento’s old city.  I had been trying to figure out where these spots were – when you Google «Sorrento», beautiful coastal photos show up.  Some are clearly taken from a boat, but many are taken from a higher vantage point.  I’m so happy we managed to get to higher ground.  The views will permanently be etched in my memory, as will the cars brushing past me. 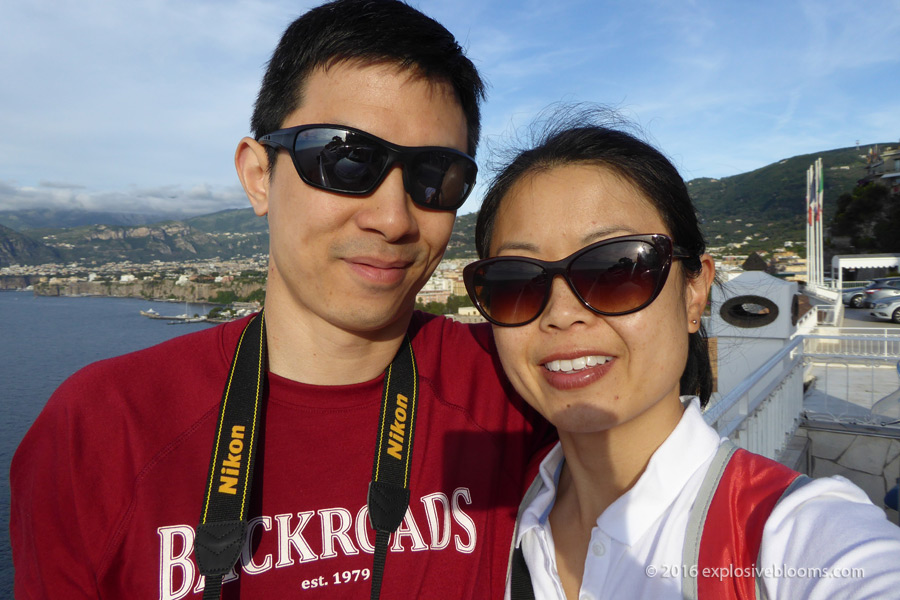 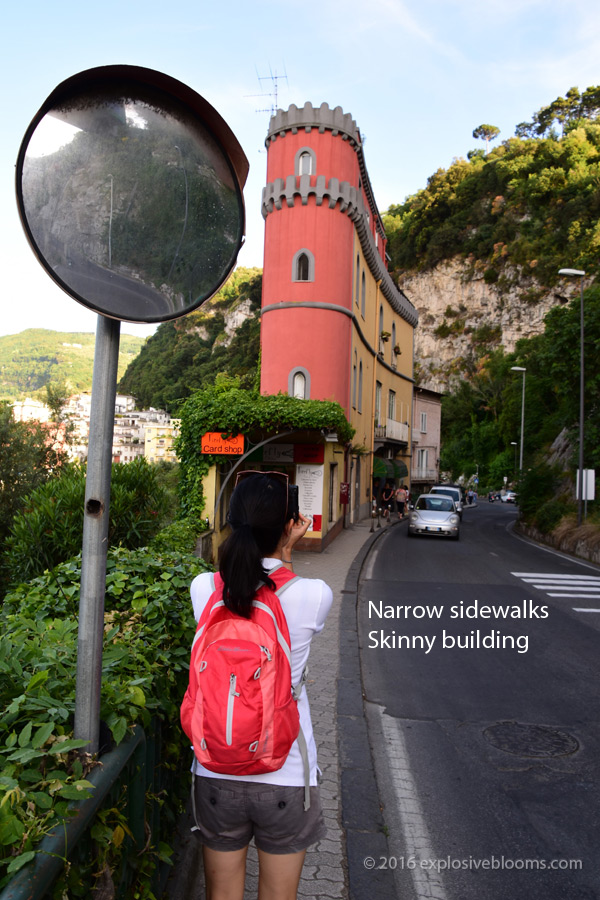 Dinner was down by the water again, simply because I love the views.  The sun was setting as we arrived and the sky was striking with the warm glow. 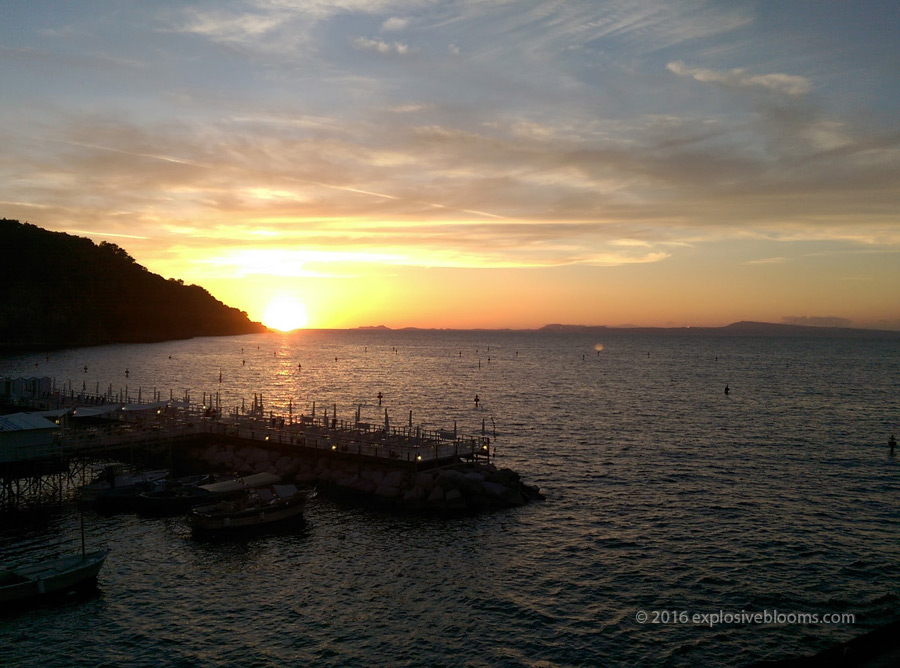 The restaurant we chose was based on it being owned by a fisherman cooperative, and we saw people with whole grilled fish when we walked by.  It wasn’t the busiest restaurant, but we wanted to try the fish. However, we ordered the wrong thing, and ended up with a plate of fried sardines instead of a single grilled fish.  The seafood risotto I ordered was sub-par, especially compared to the last two seafood dinners we’ve had.  It was a downer, but at least I had space for gelato at Davide’s again.  I had a two scoops – kiwi and mixed citrus. The mixed citrus is nice, with a hint of fruit rind bitterness. 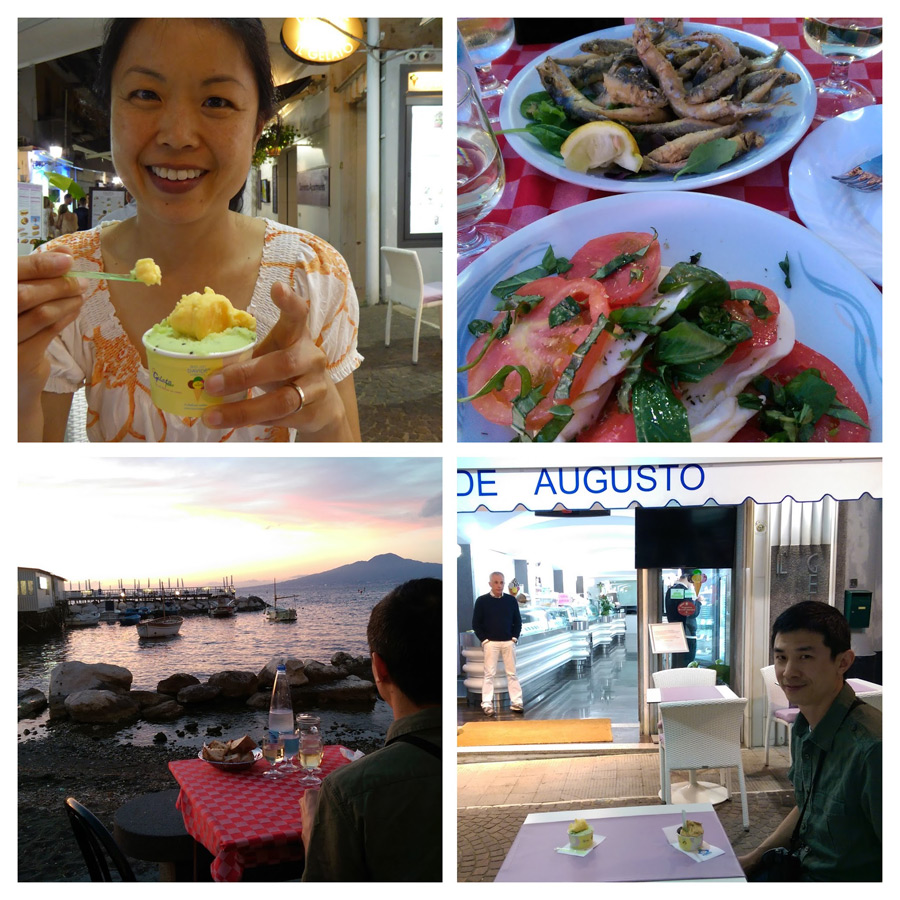 I’m really looking forward to tomorrow, though I’m also concerned about car sickness.  We are going on an Amalfi Coast tour, but based on what people have told us, and being on the road today, it could be hard for me.  I’ll be sure to take a Gravol before getting into the mini van.  We will be visiting Positano, Amalfi, and Ravello. I can only hope for the best! I really don’t want to feel ill. 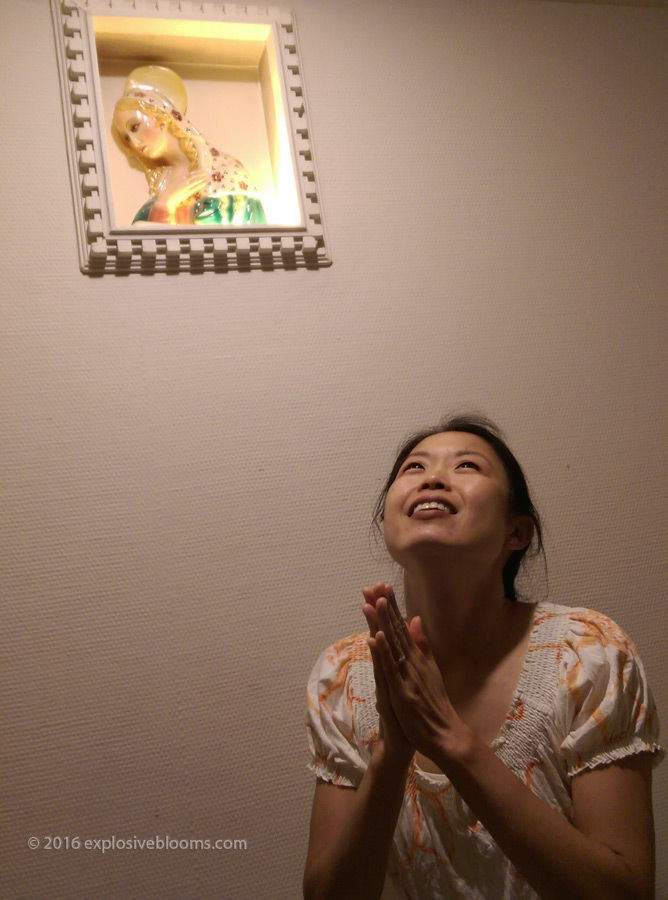