Our days in Kelowna were lots of fun and immensely relaxing. It was just what we needed. The drive to Kelowna from Jasper was an adventure, especially when we climbed high up the mountain. 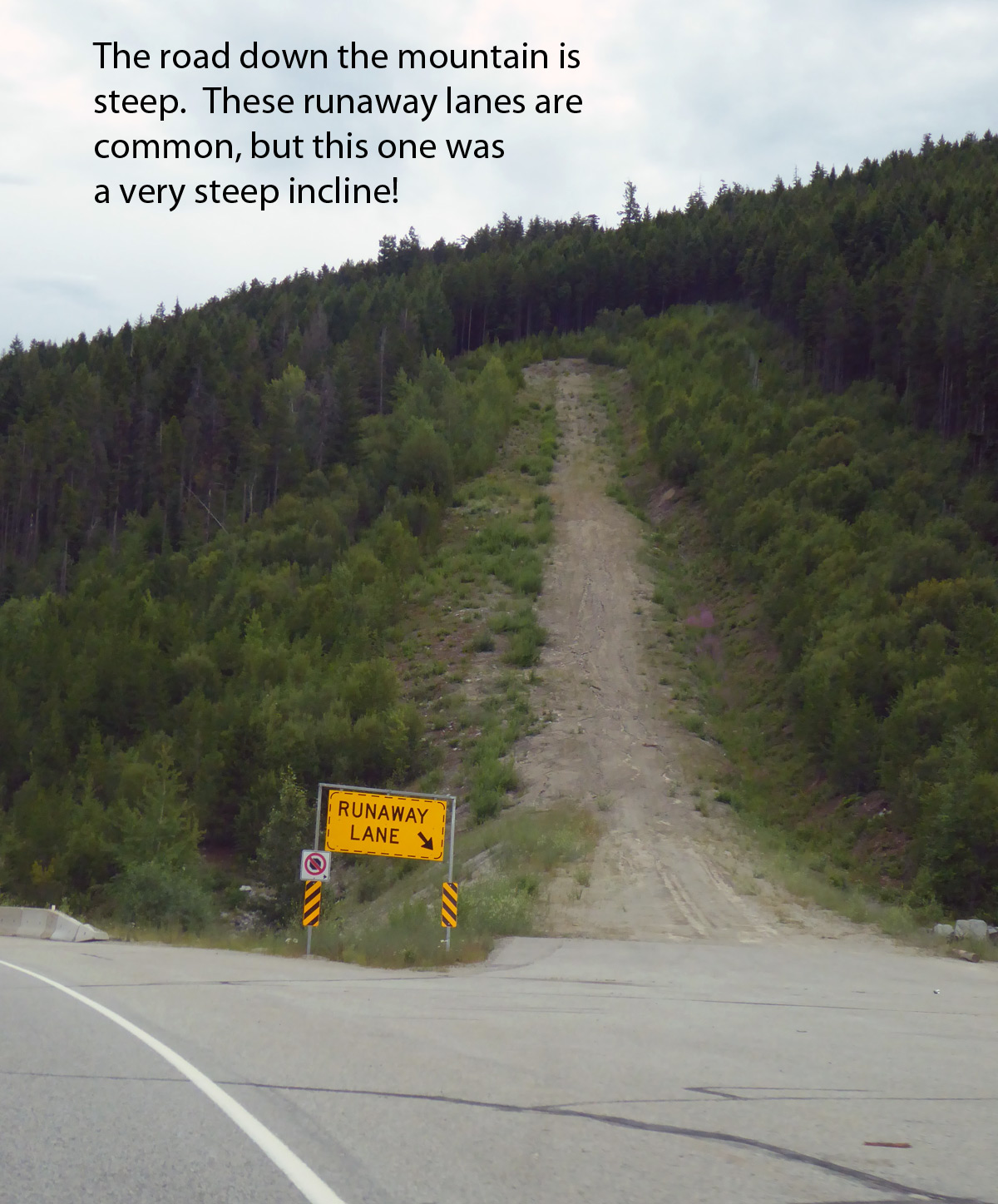 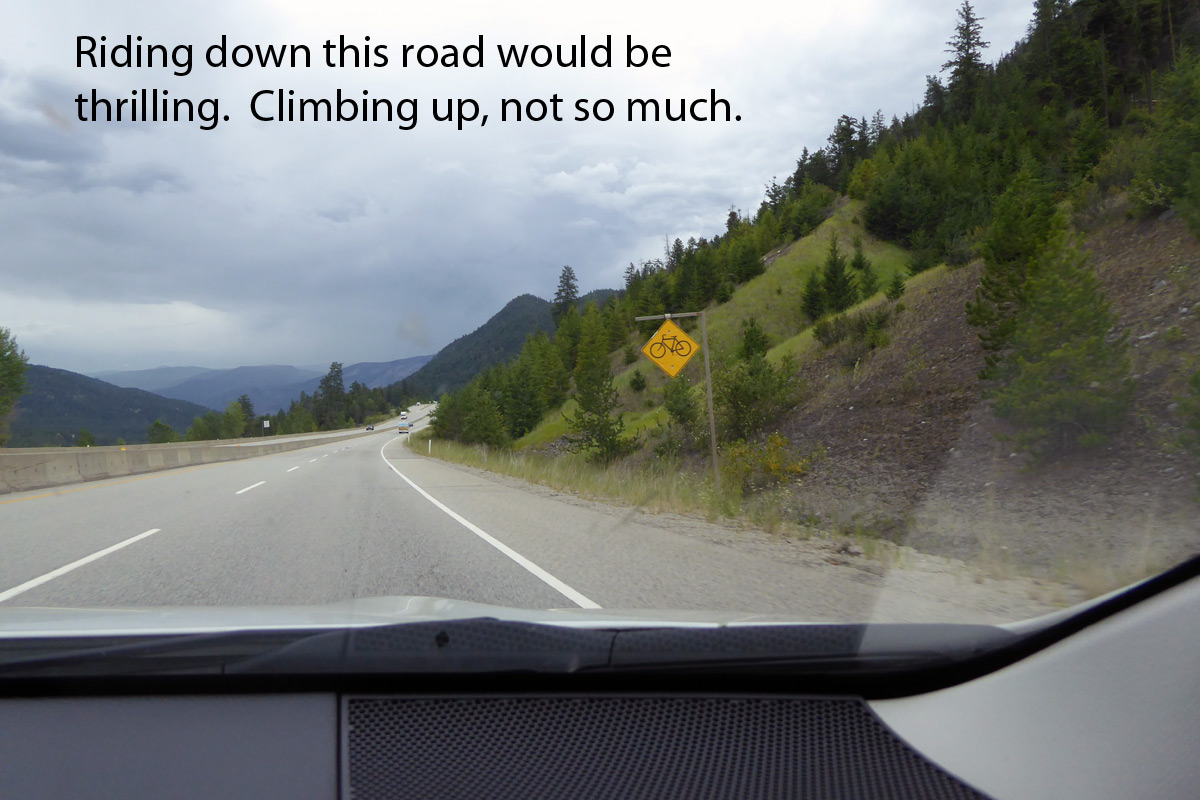 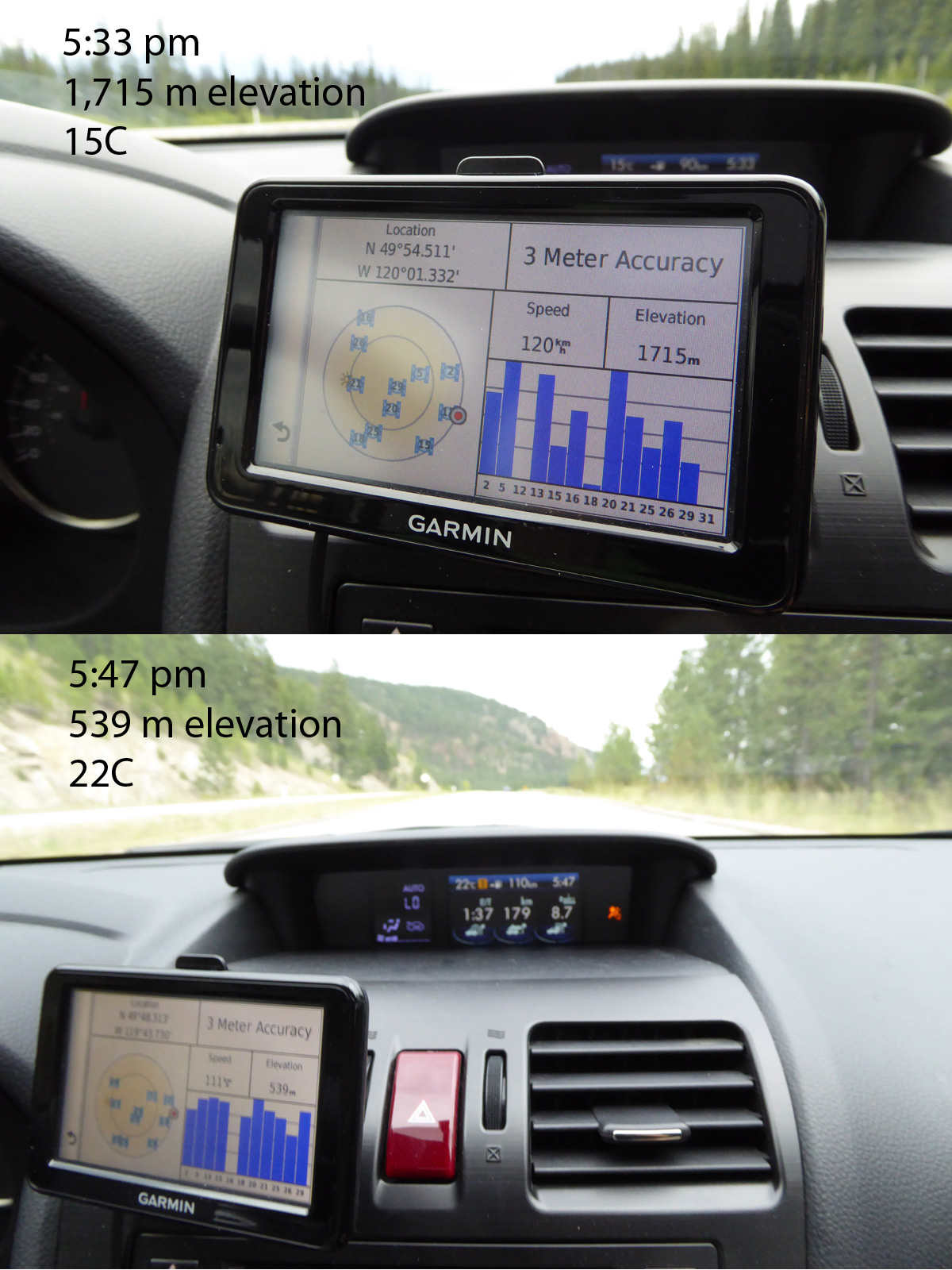 Hubs booked us into View of the Lake B&B located in West Kelowna, and I loved it. The owners live in one half of the house, while the other half has a small kitchenette/bar area, and a very large living and dining room with massive picture windows that lead out onto a comfortable covered balcony that overlooks the water and downtown Kelowna. The four rooms upstairs have been renovated for guests. They are spacious rooms, each with a different view. Our room had a spacious walk-in closet and a spacious and modern washroom with heated floors. We had a king sized bed and our own thermostat to adjust the central A/C for our room. The mattress was a little worn, meaning that my side of the bed dipped quite a bit, but I still managed to sleep ok. Owners Steve and Chrissy are gracious and hospitable hosts, originally from England. Steve is a chef, and he prepared delicious three course breakfasts for us while Chrissy served and cleared dishes. 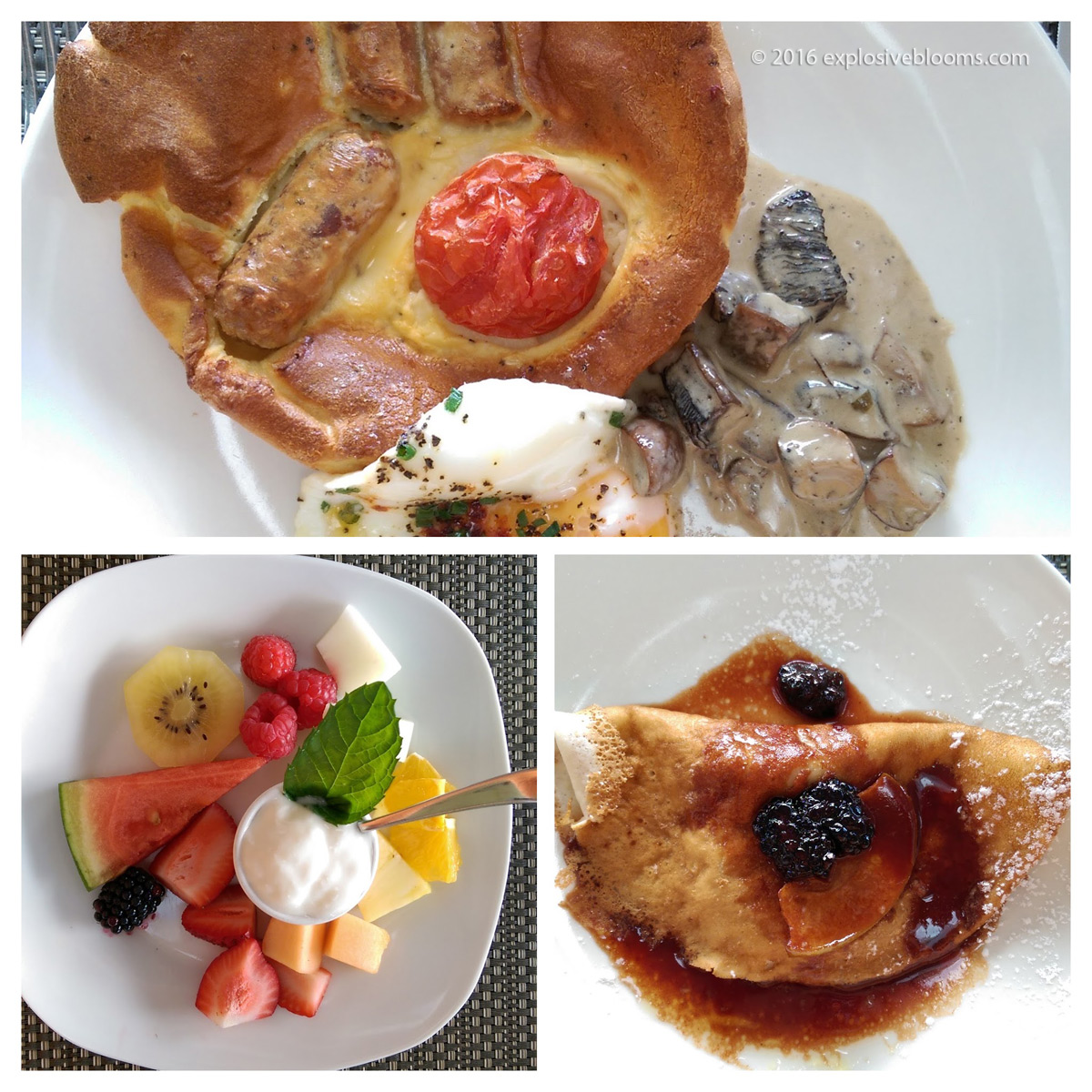 They are a perfect team, with a great sense of humour that made you feel like old friends. Their dog, Tia, was a sweet and well-behaved Lab. If you are not a dog person, no problem. Tia is trained not to come into the guest quarters. When we first arrived, she was lying right at the kitchen doorway that leads into the guest dining room. She was right on the divide, but didn’t cross it, with her nose poking out the door. It was adorable.

Apparently the weather had been cold and rainy up until we arrived, so we got lucky and were served breakfast on the balcony. I can’t get tired of the view! On our second day after breakfast, we headed to the wineries in the Lake District. Our first stop was Arrowleaf Cellars, set by the water. The tasting was free, and we took Steve’s advice and hubs and I shared a tasting. We ended up purchasing a 2015 Gewürztraminer and a 2015 Bacchus. The Gewürztraminer really surprised me – it was not sweet like I typically associate that type of wine to be. Our second stop was 50th Parallel Estate Winery. The building was more industrial and Steve had mentioned that the wine maker was attempting to create the best Pinot Noir in Canada. We went through the tasting and I was not wowed by the Pinot, or any of the other wines. 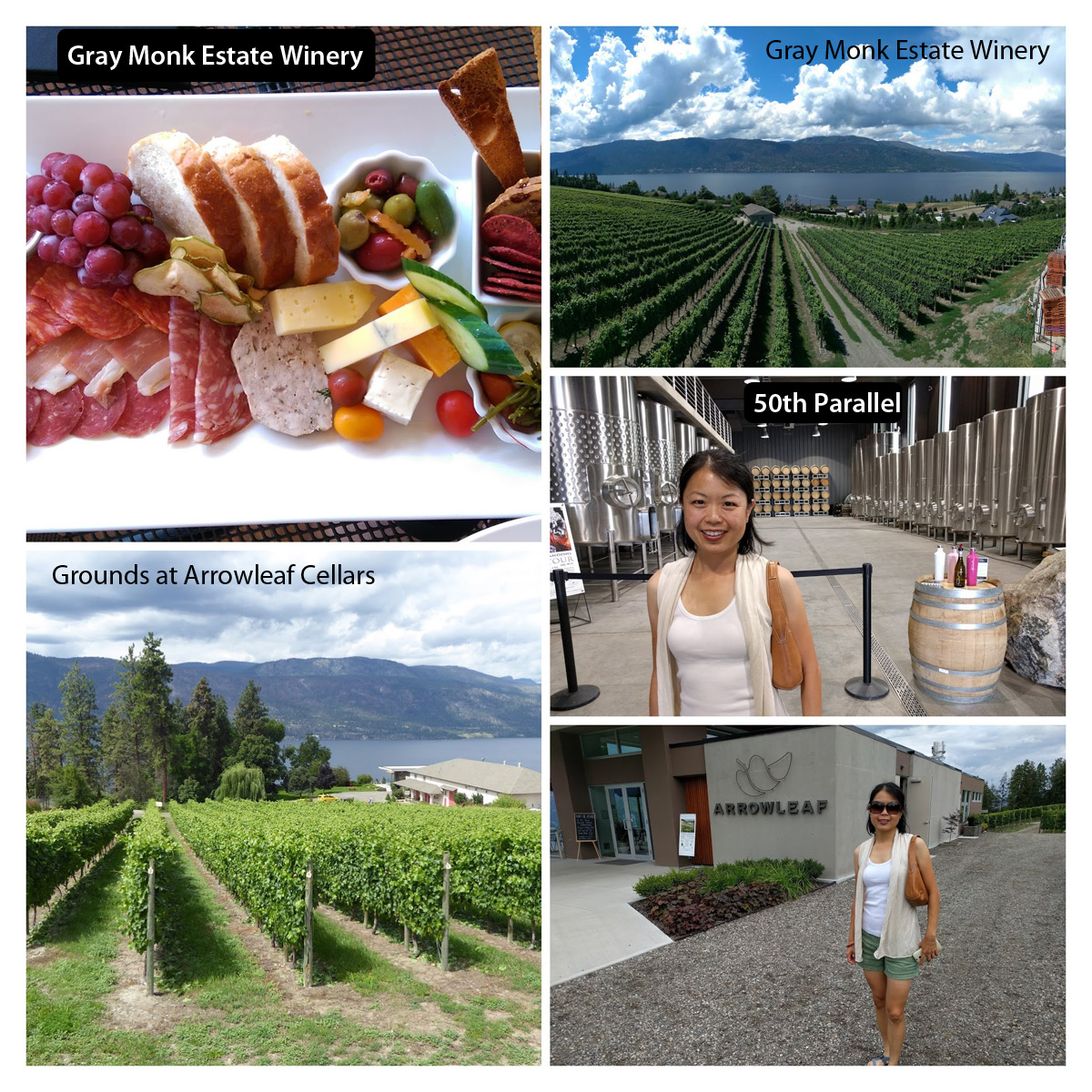 Our final stop was Gray Monk, where we stopped for lunch, after we did a tasting and found an interest in their 2015 Pinot Auxerrois. It has a unique, more nutty flavour, which was what got my attention. The restaurant overlooks part of the winery, with expansive views of the water and surrounding area. Unfortunately they were not seating people outdoors because of possible storms (didn’t happen in the afternoon), but that didn’t make the experience any less enjoyable. The food was beautifully presented, and the portions were generous. We really enjoyed the charcuterie board with a vast array of pickled items, some cured meats, crackers, olives, and cheeses. The cheeses were a little bland, except for the Pacific Rock cheddar which had a distinct flavour. We also shared the stealhead trout, which was poached and served with a creamy risotto and grilled asparagus, and lastly we ordered the wild salmon tartare. I enjoyed it, but hubs thought it needed salt. I simply used the aioli sauce provided and found it brought out enough flavour.

That evening we tried to get a table at Mission Hill winery for dinner, but they were booked solid. That turned out to be a blessing because we snagged a table at Quail’s Gate Estate and had a phenomenal meal and light show! As we were driving there, the rain clouds were rolling in and we could see the start of a rainbow. The rainbow was so big and bright at one end where it was growing, that it actually looked like it was on fire. We stopped to try to take photos, but it turned out that at Quail’s Gate, we had the best view. Unable to capture the entirety on camera, I saw the most magnificent sight. The rainbow and almost fully formed and it was big and bright. The left, the rain clouds were thick and dark, and I could see the lightning. On the right of the rainbow was sunshine and clearer blue skies. It was like nothing I have ever seen. The rain started falling and we ran into the restaurant where our table was waiting. 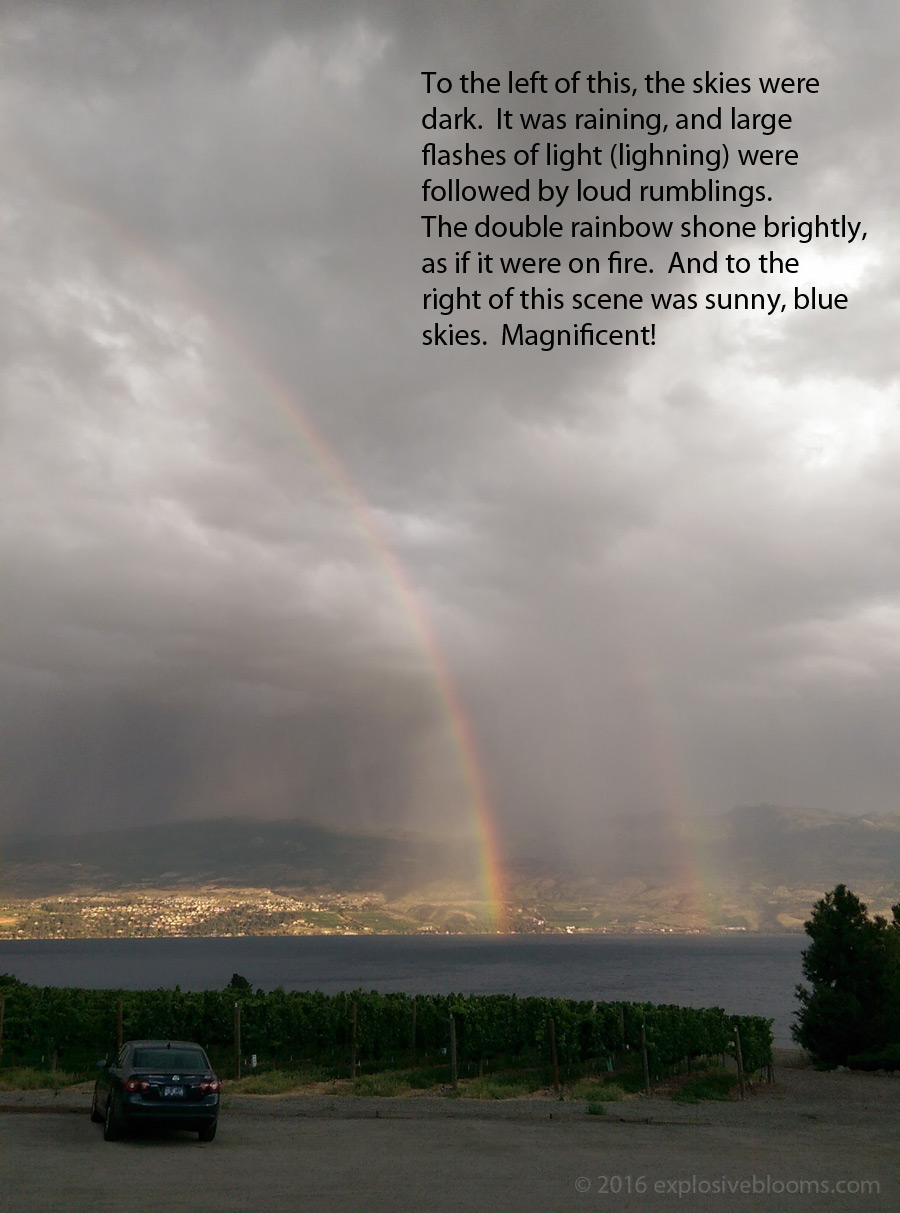 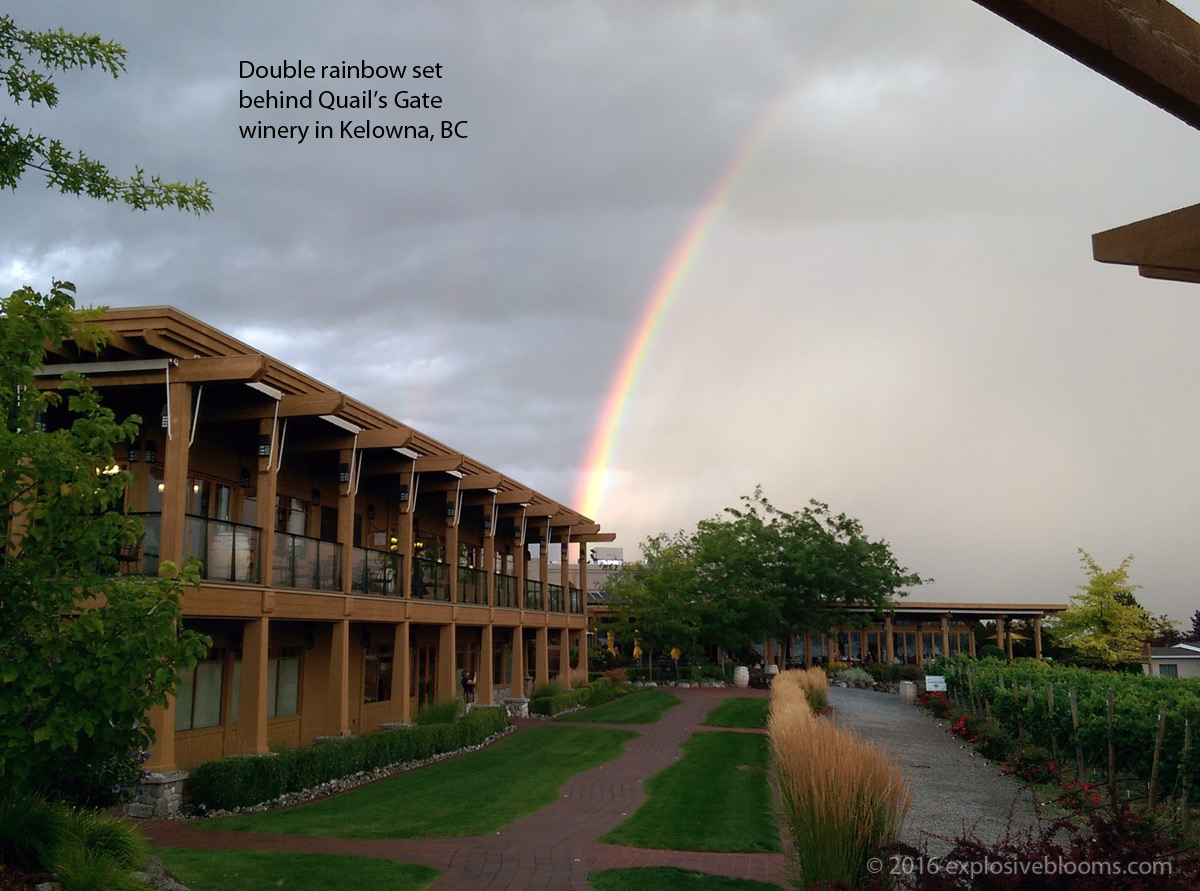 We share oysters and hubs ordered the duck, which he commented on saying that it’s one of the better duck dishes he’s had. I wasn’t in a meat mood and ordered the spiced lentils, which was so perfect in flavour (curry) and texture. We had ordered a white flight of wine, and my dish paired so beautifully with their Gewürztraminer (so I went back the next day and purchased two bottles). I could have licked the plate. The dessert was a let down. It was an orange, carrot, and ginger sorbet, but it was way too tart, making my mouth pucker with every taste. I felt like my tongue was blistering. I finished my tea and we settled up. 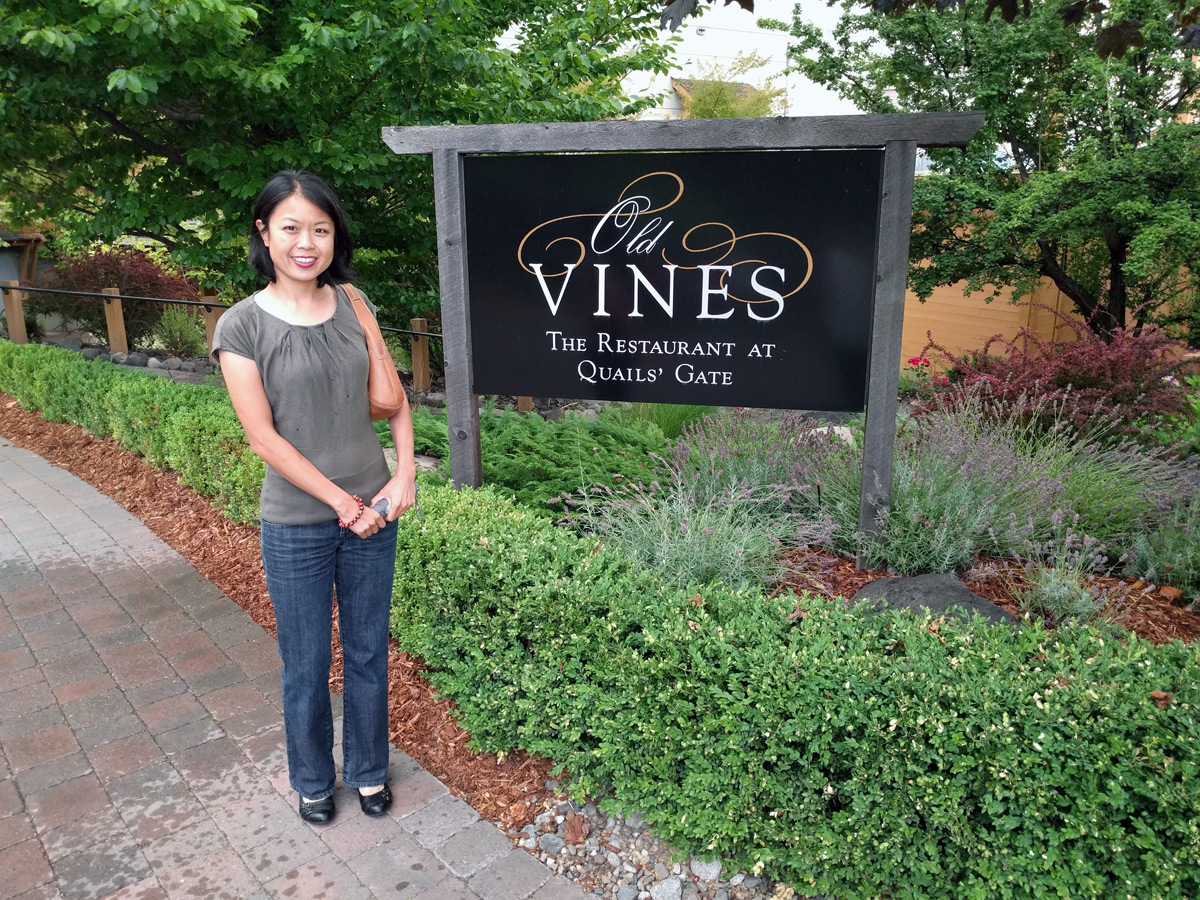 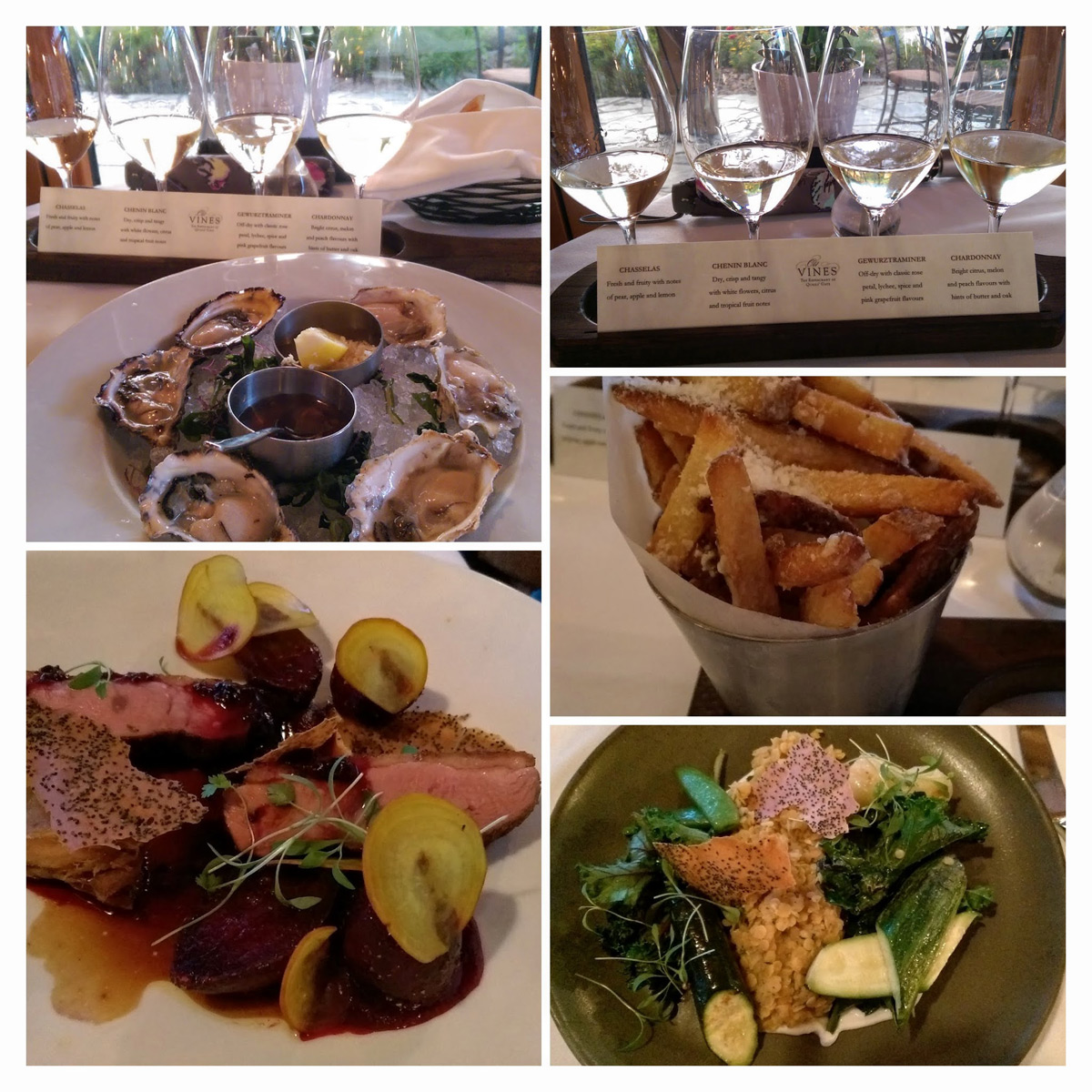 The next day was a drive day – heading to Vancouver, but first we stopped at the farmer’s market and picked up some fruit for the ride, and then to Quail’s Gate to buy my wine, and we stopped at Mission Hill Winery for lunch since our friends had talked it up. The grounds are grand compared to the other wineries in the area, but it’s no Mendoza. The meal was ok, while the service was very slow. 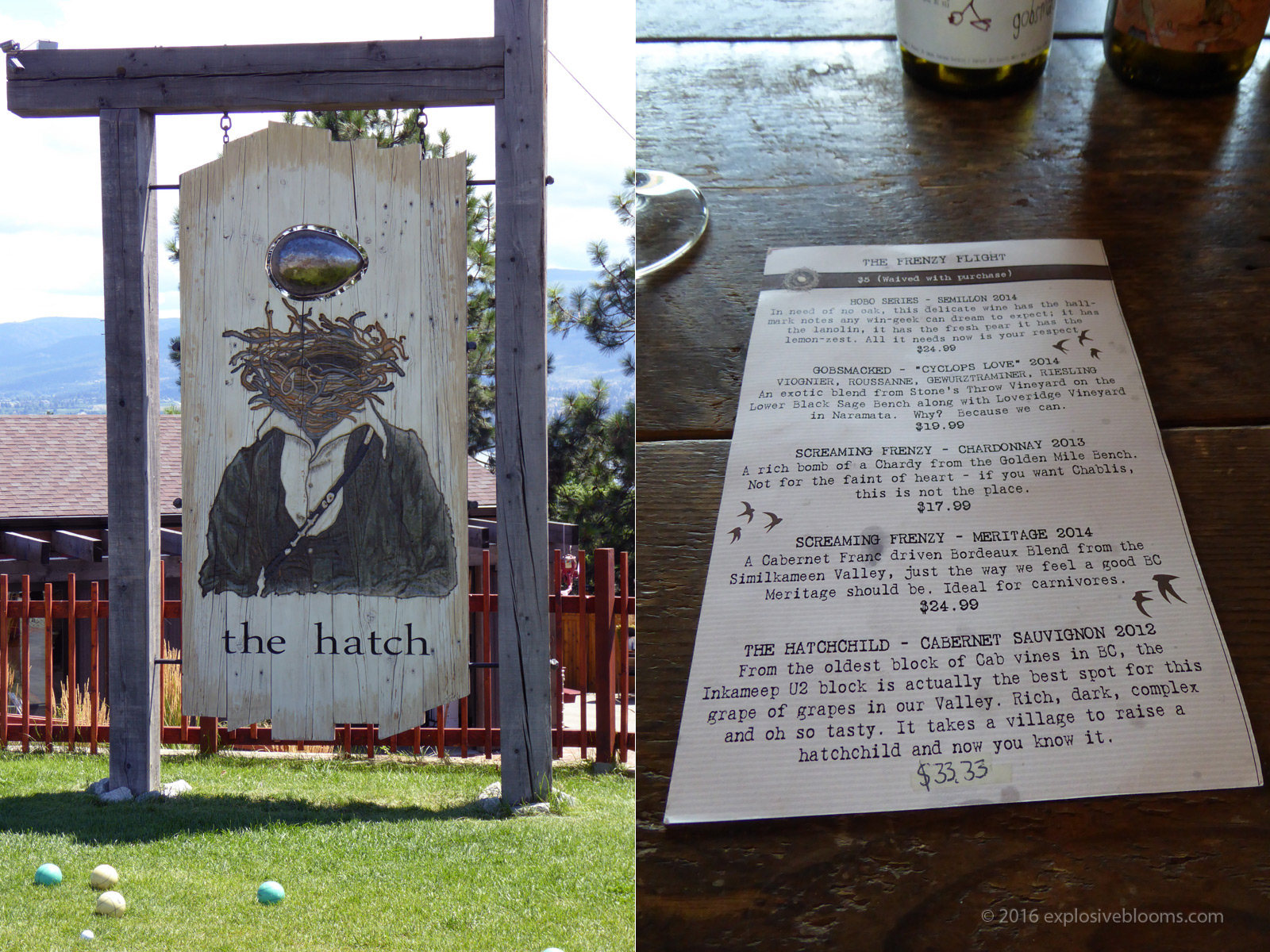 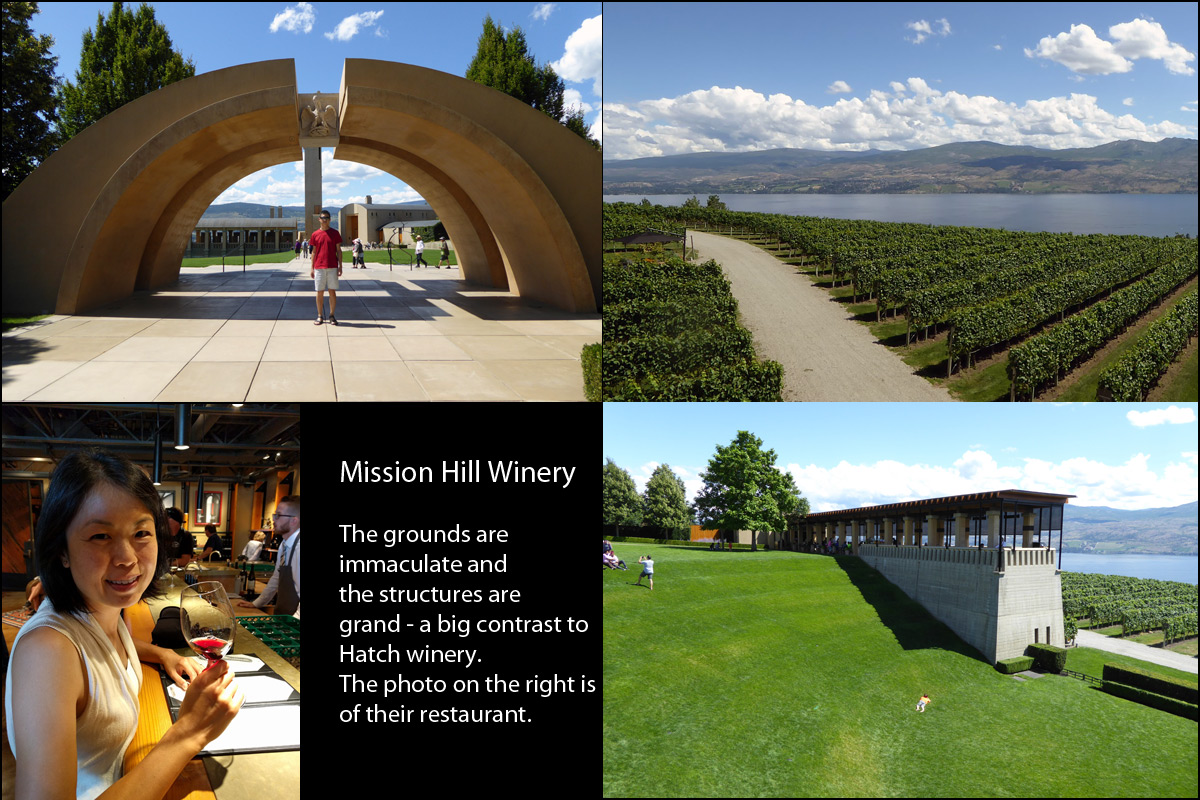 We arrived in Vancouver (the city of Richmond to be exact) in the early evening. Our families had arrived earlier and checked in. They were getting ready for bed, but for them, they were still on Toronto time. Hubs and I went out for dinner at a Shanghai restaurant not far from our hotel. Today, we did some family things, including eating a lot of food and doing our laundry at the hotel. In the evening, after dinner at a Chinese restaurant, my uncle showed us around downtown Vancouver. The city vaguely reminded me of downtown Toronto (financial district) and the Harbourfront, though downtown Vancouver has a way more grandiose waterfront.