We arrived in the Denali area yesterday afternoon from Talkeetna. The weather from the cruise has followed us as we travel deeper into Alaska, which means that we woke up to rain. At breakfast, we asked the B&B owner, Bill, what he suggested we could do on a day like this. The drive to the park would take us two hours, so he suggested that we stop at Coal Creek and do a hike that would take us above the tree line; however, he wasn’t sure if we’d be able to see much, specifically of Mt. Denali, with so much cloud cover. On a clear day, he highly recommended it, and it’s something to do to break up the drive. When we were approaching the start of the hiking trail by car, I told hubs to keep driving because I wasn’t in the mood to hike in the rain and get muddy. We continued and the winds seemed to pick up. This was not the weather I was hoping for. Before hitting the entrance of the park, we pulled into McKinley Creekside Cabins, which is home for a couple of nights. I also wanted to inquire about some guided activities that had been included in the email they sent to us with our cabin booking confirmation. The woman at the front desk was not particularly helpful when I asked about the Tundra Wilderness Tour. I expected to her to make an effort and call or check online for us, but instead she told us that that trip usually fills up quickly and that our best bet would be to go into the park and see what they could offer. Customer service, total fail. Not being satisfied with the validity of her answer, we connected to their wifi and did our own search. The reason we had not pre-booked any tours was because we had originally considered doing our own thing, assuming good weather. We also did not do too much research and realized that we were not properly equipped to hike alone – mainly with respect to dealing with wild animals like grizzlies. We ended up finding another physical address to inquire further about the Tundra Wilderness Tours, which was a short drive down the road from our cabin. Guess what? There was still space the next day, so we took the last two spots on the 8:00 am tour. 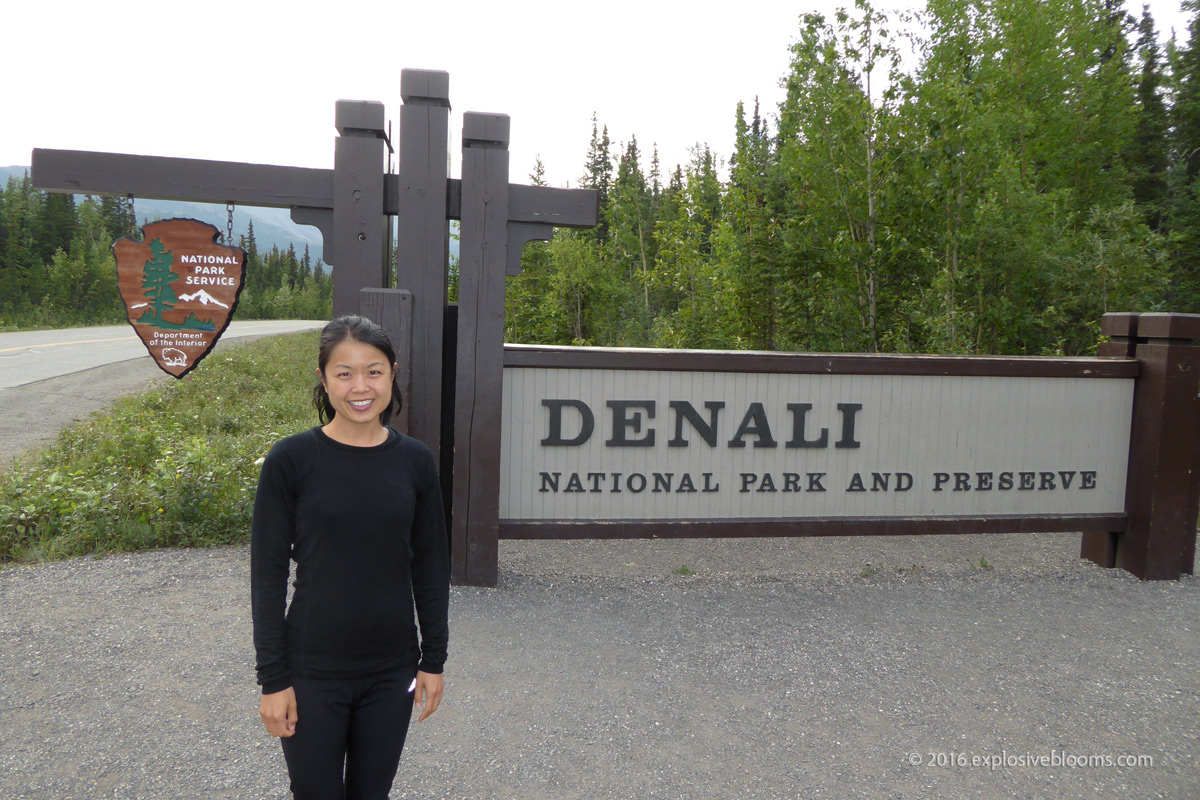 The next stop was the park. At the visitor’s centre we spoke with ranger Joshua who was enthusiastic, helpful, and friendly. He told us about the short guided walks and the ranger-led Discovery Hikes. Since our wilderness tour was the next day, and would last 7-8 hours, we agreed to sign up for the following day’s hike with ranger Andy. (Josh spoke very highly of Andy). This hike would take us into the wild, but with a living guide. For safety purposes, this is what we wanted and needed. In the meantime, Josh informed us of some shorter hikes we could do on our own on more traveled trails. In order to keep Denali wild, private vehicles are only able to travel 15 miles into the park. The remaining 92 miles can only be accessed by the park buses. You can hop on/off anywhere along the route. The park shuttle system is to prevent thousands of cars from traveling through the park. Yesterday, we drove to mile 15 and started the Savage Creek Alpine hike. 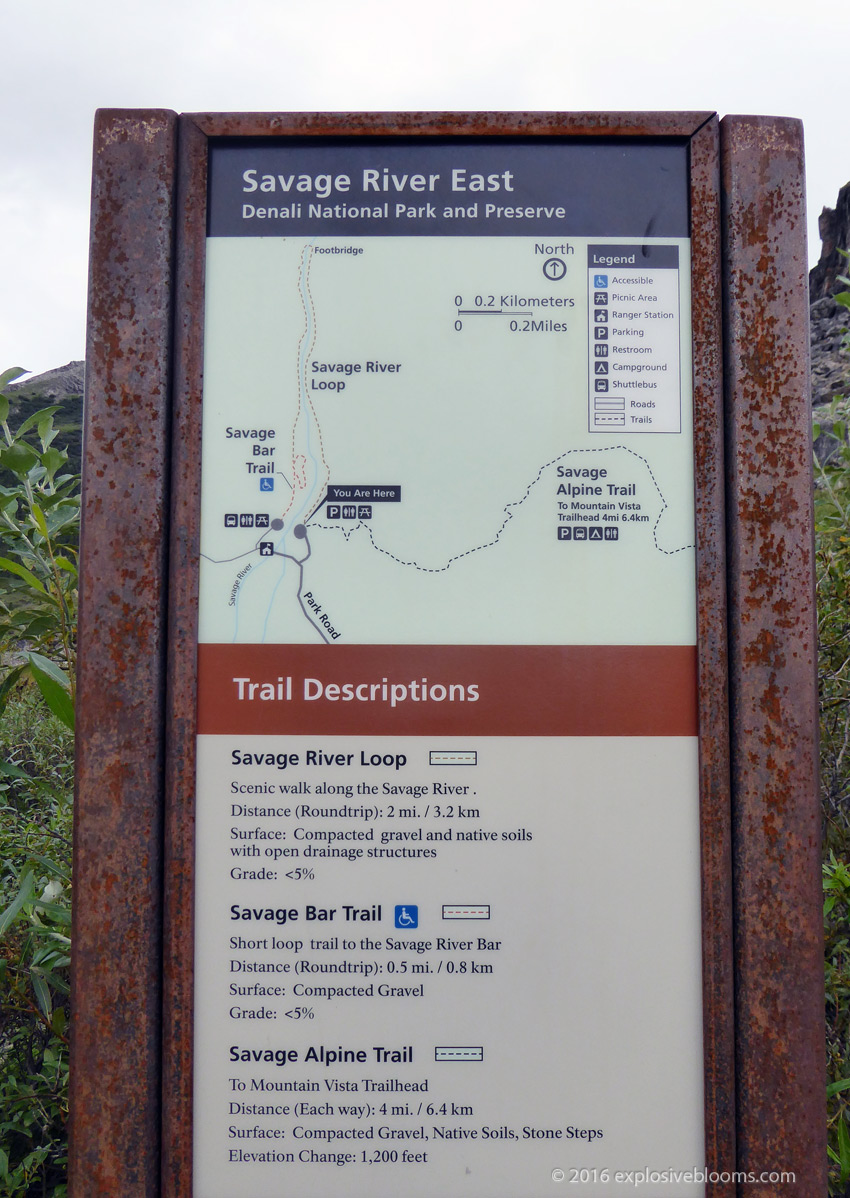 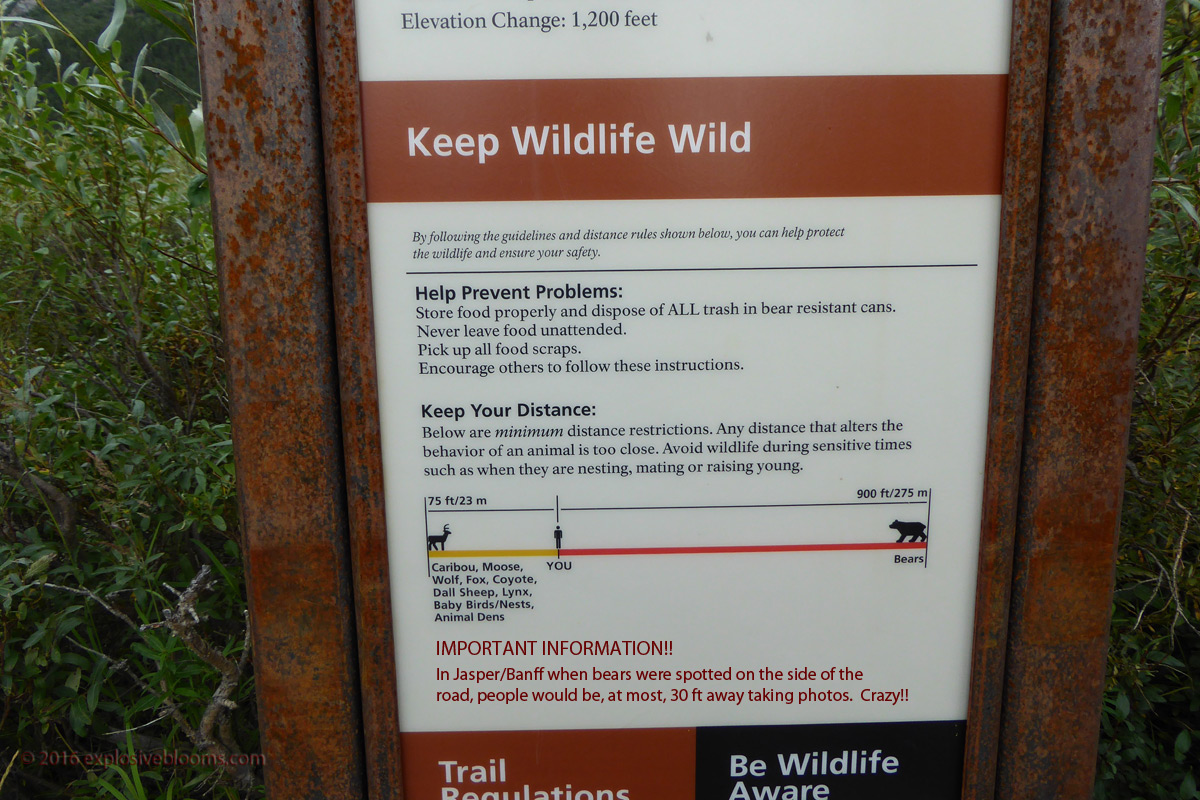 We did not do the full hike because it was not a loop and we were not sure what the bus schedule looked like or when they stopped running. All we assumed was that the bus came by hourly, and most of the time they were full. If we did do the full hike, we’d be three miles away from our car. It was after 3:30 pm when we started the hike, and the full hike was estimated to take around three hours. We climbed up to the highest ridge (elevation gain of 450 metres) before turning around. It wasn’t quite halfway, but the trail looked to be leading downhill where we decided to turn back. During our hike we spotted caribou, a moose and her calf, and plenty of arctic ground squirrels. it was pretty wild to get to see all this, in one day! This was a good way to get our legs warmed up for the Discovery Hike. My legs were shaking when we returned to the car – building up some muscle! 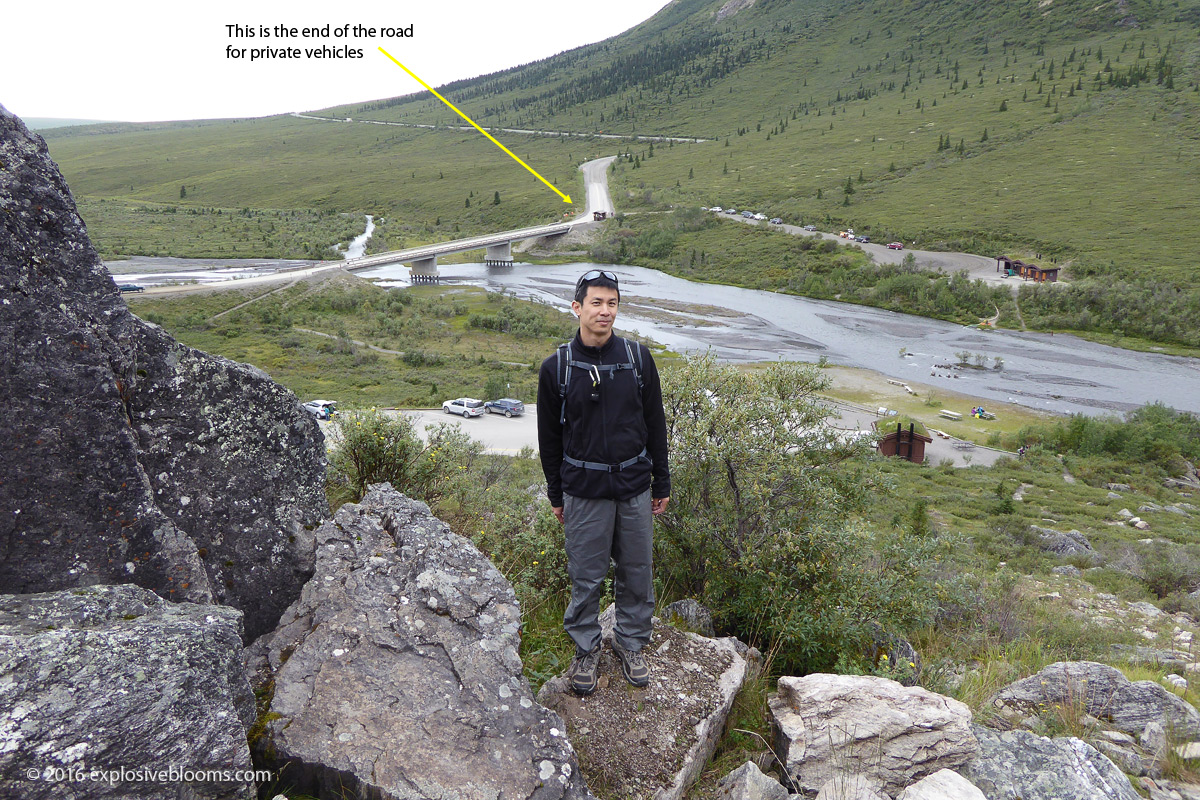 *** Apologies, photos mislabeled. There were no elk in Denali. They are all caribou. *** 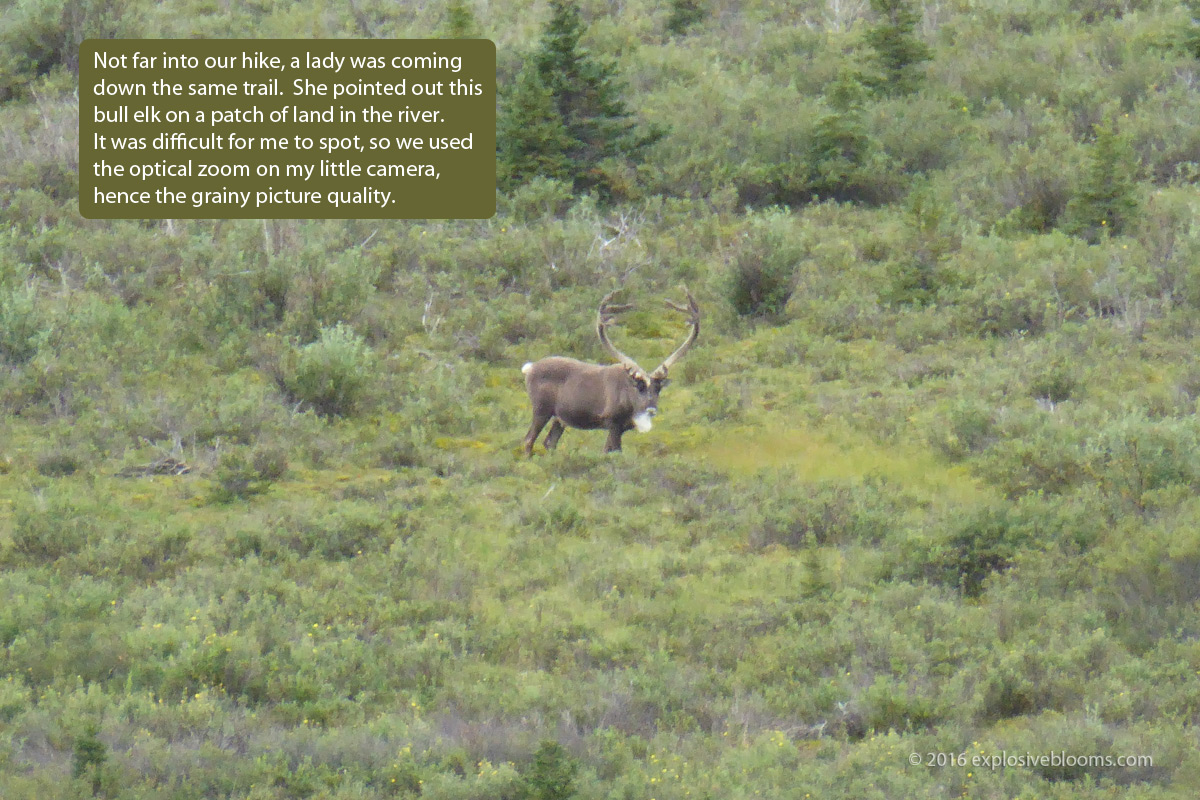 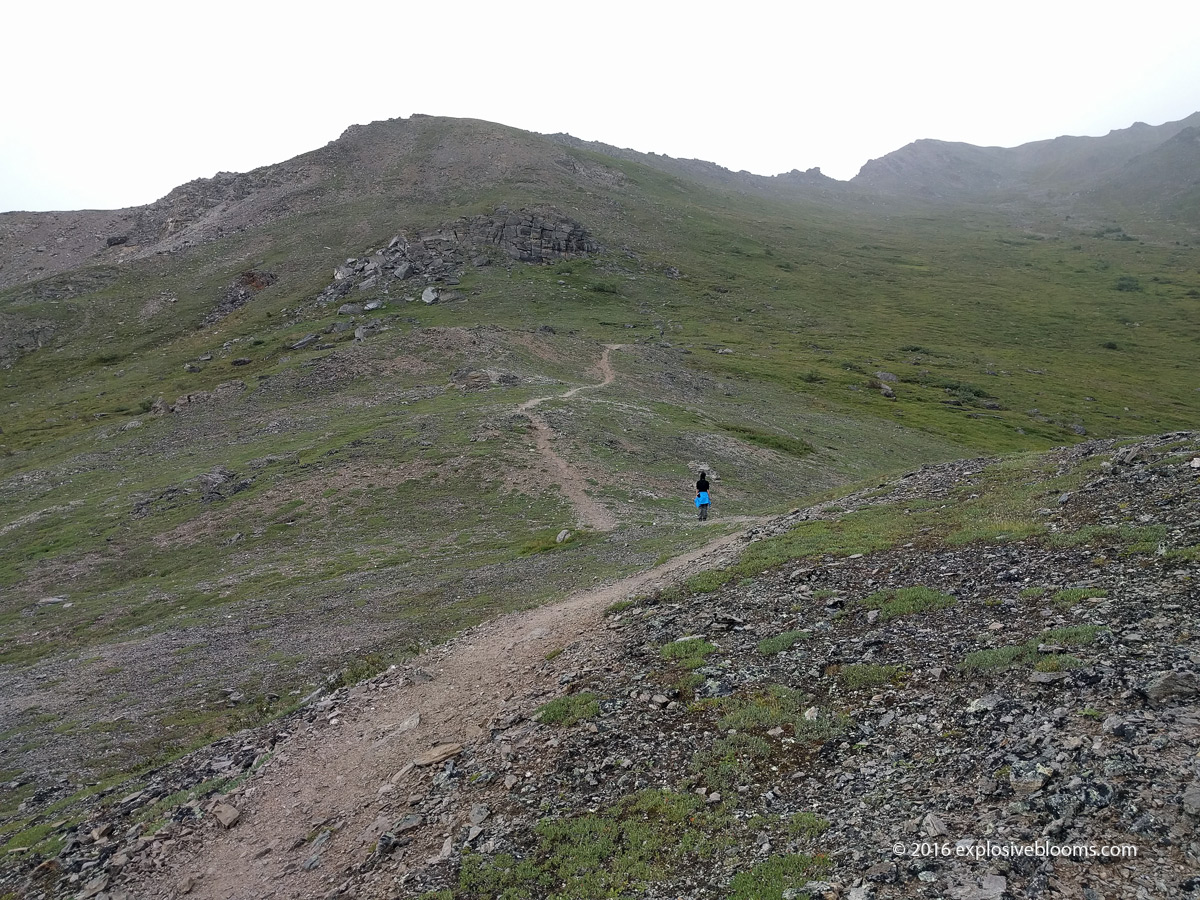 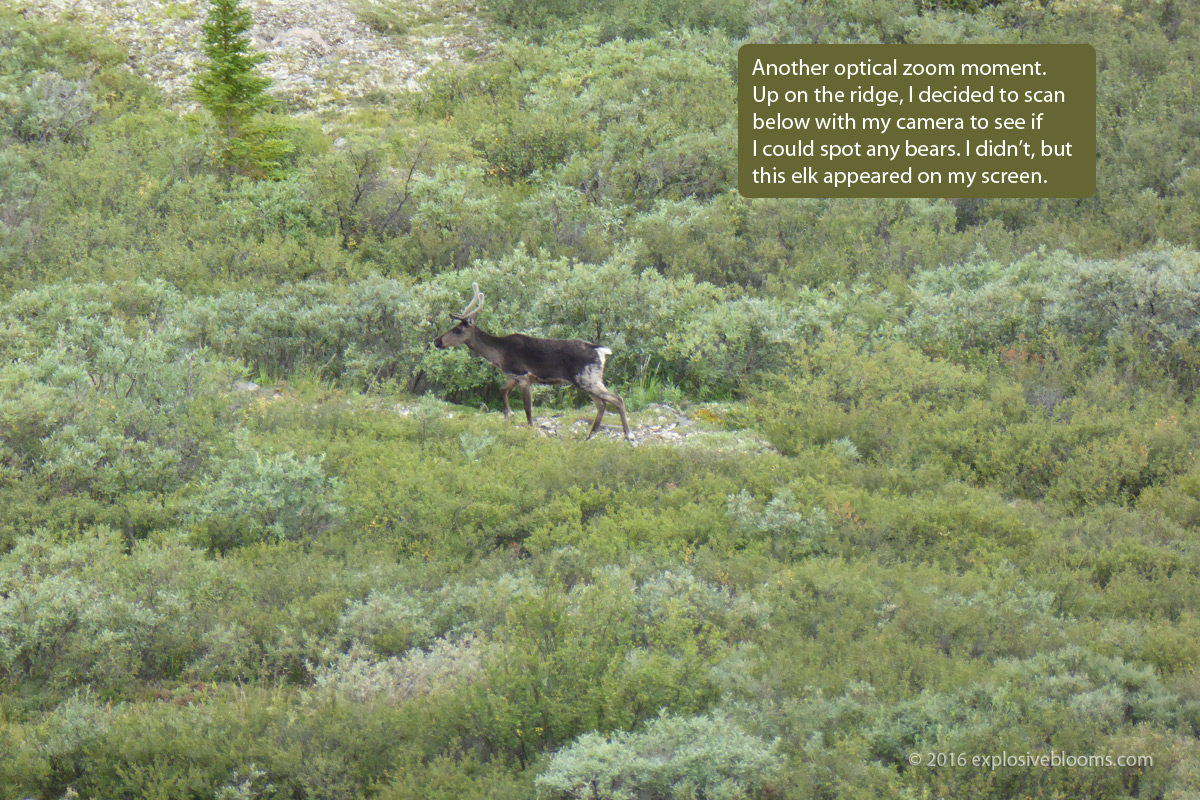 Our cabin is really basic. Welcome to Alaska! It felt like the real experience when we opened the door to the very small, and very cold (temperature) space. I was shivering and asked hubs if the heater worked. I was so cold that I was frozen on the spot. I literally could not move and my teeth started to chatter. Hubs begged me not to use up all the hot water, as he suspected a place like this would have limited hot water, but that’s where he was wrong. The shower was great, with plenty of hot water. The cabin faces a fast running creek, Carlo Creek. If it were warmer, I’d sit on our tiny front porch and enjoy the views of the creek and surrounding mountains, but it’s misty and cold. I will say that I do enjoy the sound of the creek as I’m lying in bed. It’s a soothing white noise. 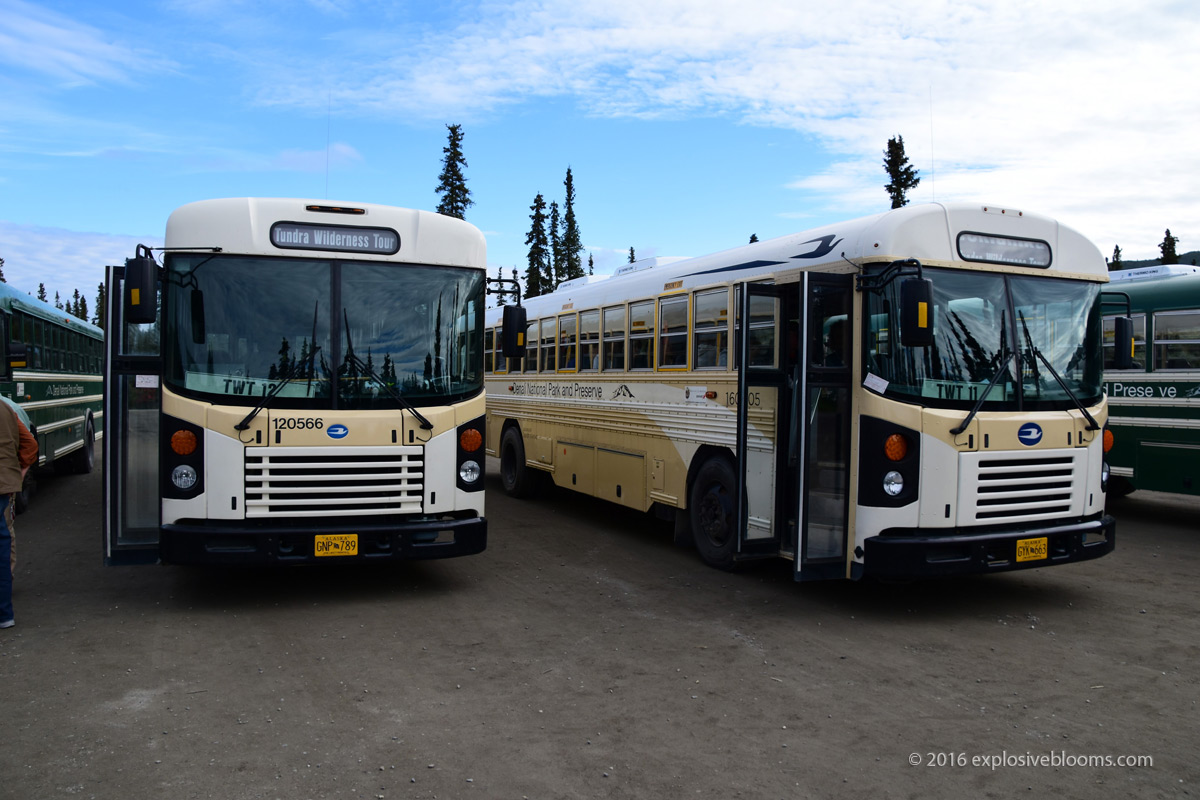 This morning I was not thrilled to wake up at 6:00 am, but I was thrilled that it wasn’t raining. We arrived at the Princess Lodge just as the Tundra bus pulled in. Yes, we were touring with a bunch of old folks, coming from or going on a cruise with Princess. Hubs felt they were useless in helping to spot wildlife, but luckily other buses in front of us provide indications of wildlife sightings. We saw caribou, which wasn’t super exciting except for the bull caribou with the huge antlers. I had no idea how heavy the antlers are until I had the opportunity to pick up a set of full grown antlers. Even more heavy are moose antlers! I couldn’t even lift those over my head! 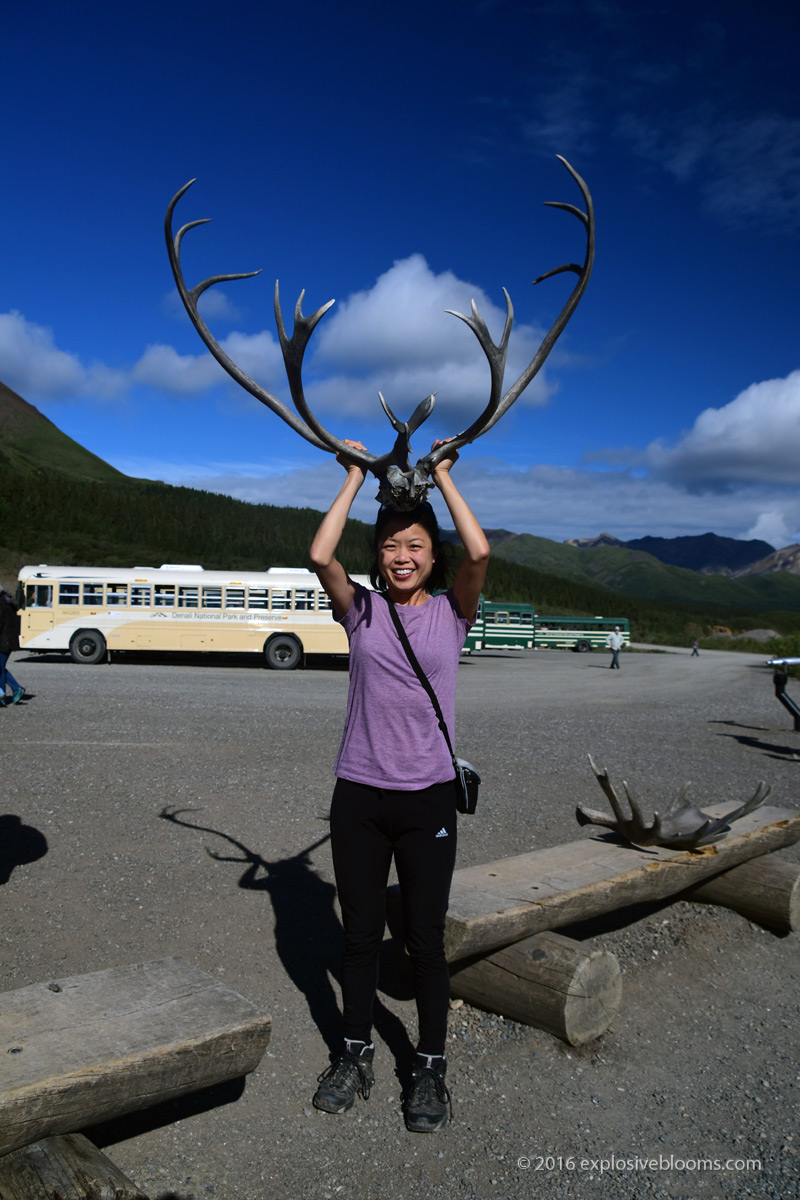 We did not spot moose on this tour, but I am happy to report that we spotted grizzly bears. The first one was fairly close to the road, but he moved quickly so I didn’t get any great shots despite the close proximity. The other sightings were quite far away, so the photos are grainy. The most amazing spotting was a mother grizzly with her two cubs coming out of a river. 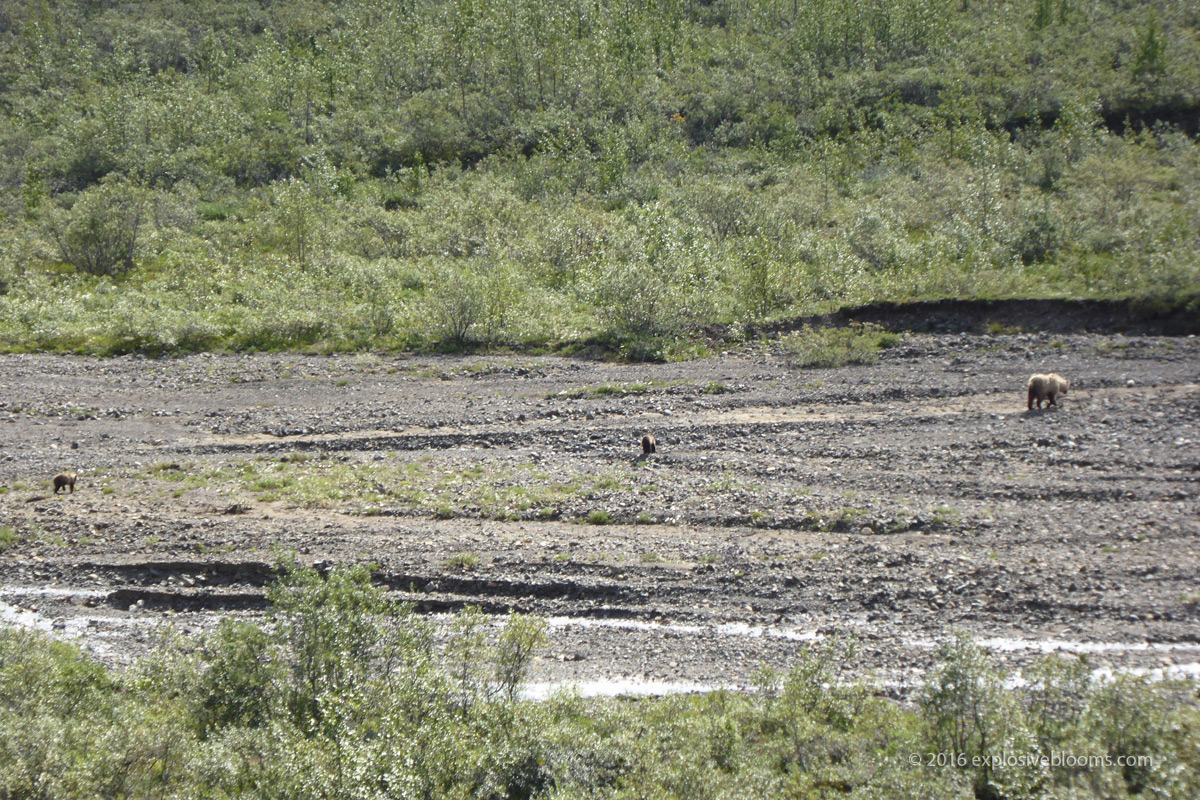 My trip feels complete now, after the grizzly sightings. Since Banff and Jasper, I have been longing to see a grizzly bear. Our trip today was made better by having sunshine and a partial view of Mt. Denali. Our guide told us that it’s been a month since Mt. Denali was this visible.

There is a distinction between measuring “highest” and “tallest.” The highest mountain is determined by measuring a mountain’s highest point above sea level. The tallest mountain is measured from base to summit. Using that measurement, Denali is taller than Mount Everest. Denali rises about 18,000 feet (5,500 meters) from its base, which is a greater vertical rise than Everest’s 12,000-foot rise (3,700 meters) from its base at 17,000 feet (5,200 meters). 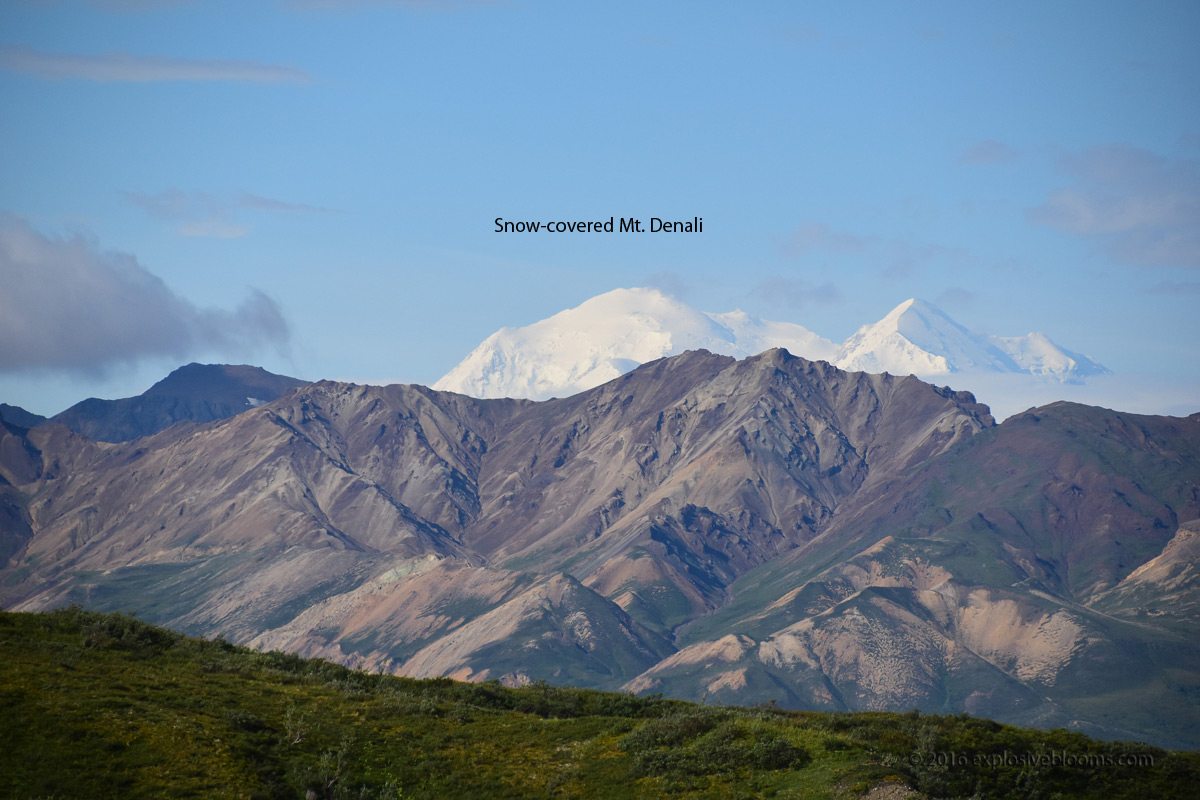 ** Fun Fact: According to our guide, only 30% of visitors actually see Mt. Denali, and a sliver of the mountain constitutes a sighting. **

Although we didn’t a completely clear view, I saw enough that it still took my breath away. 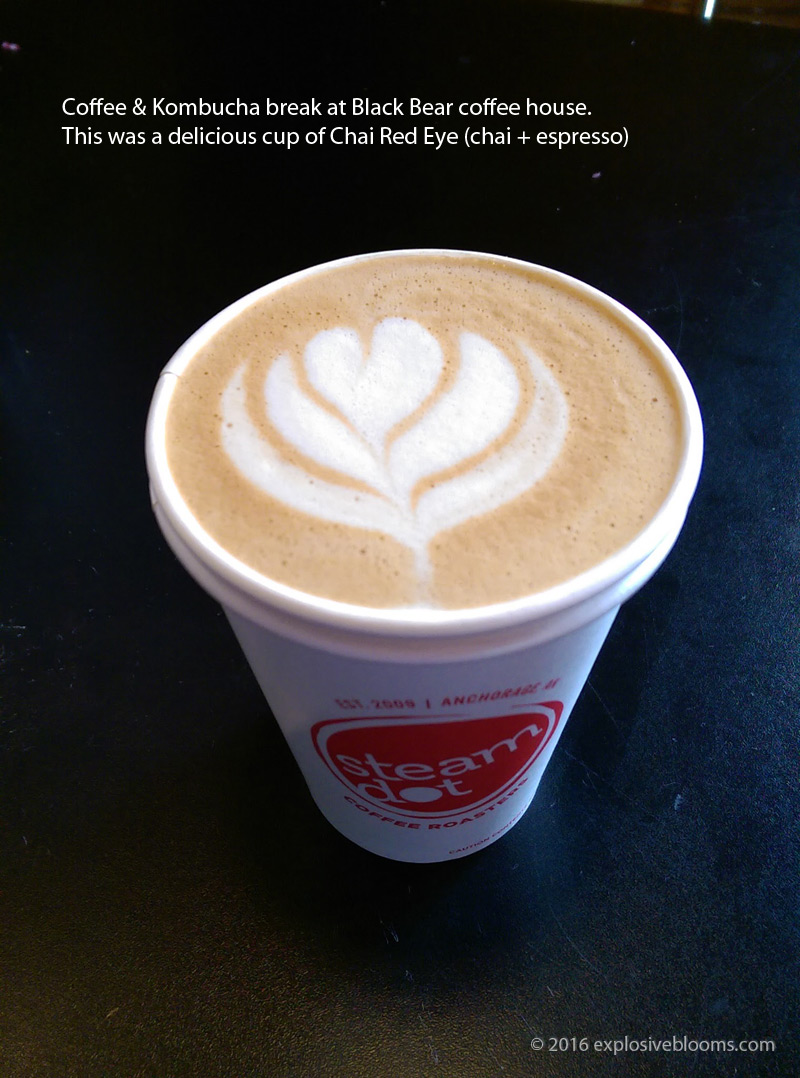 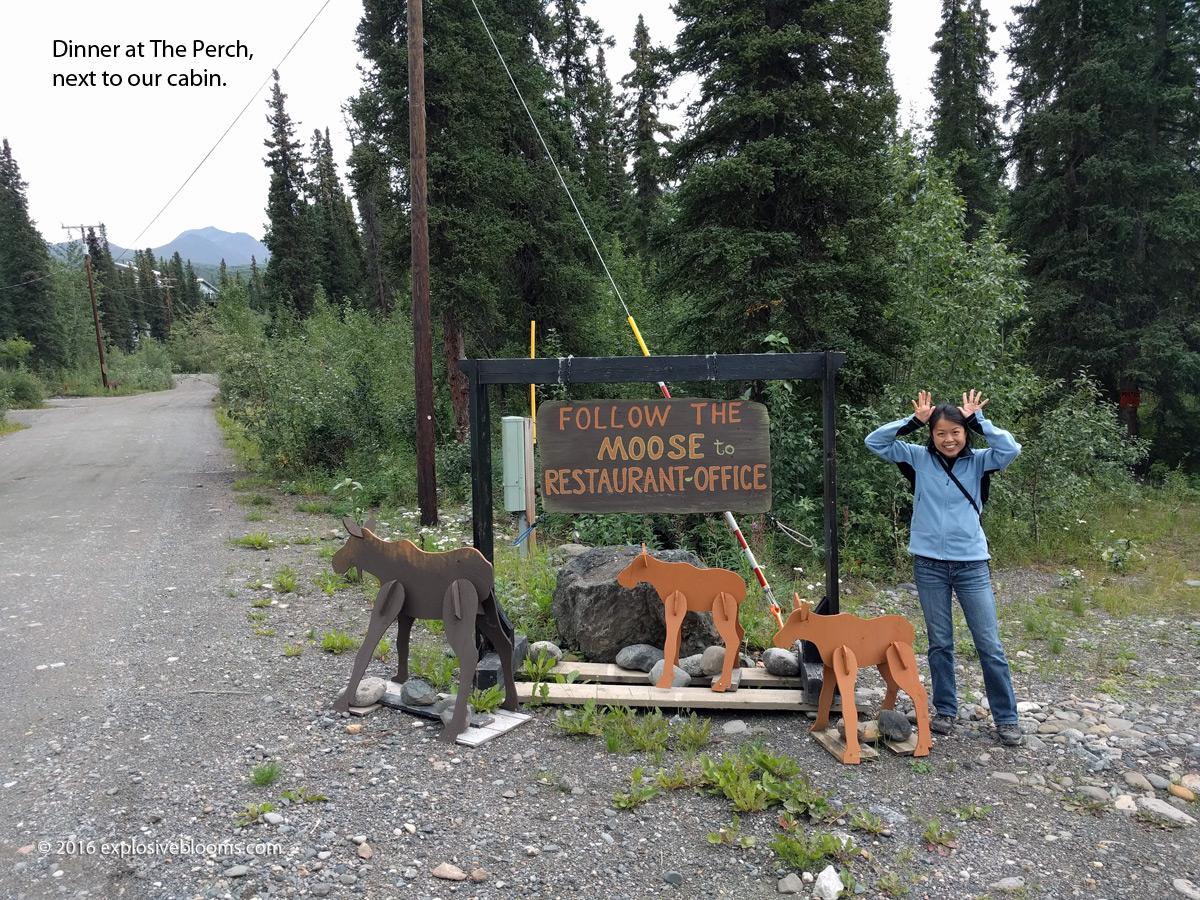 My legs are sore from sitting all day in the modified school bus. Tomorrow is another early start and long day. The hike starts deep in the park, which requires a three hour bus ride one way to our meeting spot. The hike itself will take 3-4 hours, and then we have to take the 3-hour bus ride back to our car. After that, we spend another two hours in the car driving back to Talkeetna. The following day, we drive back to Anchorage and catch our flight to Vancouver. I’m looking forward to some sunshine and heat! I feel like I haven’t worn shorts in nearly two weeks.