A few posts ago, I had mentioned purchasing some lavender products from Maison Lavande and it being an inspiration for a project. I wanted to incorporate a little bit of lavender into my home improvements, so why not take the beautiful colour and put it on the wall?

I very much like neutral colours on my wall, but what if I had a lavender accent wall – what would that look like? The best place to try it would be in the bathroom. I picked up different paint chips and I finally decided on BEHR’s Lavender Wash from the Marquee collection. More on that later.

After a lot of internet research, and watching how-to videos, I was ready to start my painting project. I went to Home Depot with my list and this is what I ended up coming home with (two separate trips):

Sanding the walls is a lot of work, and I highly suggest wearing goggles and a mask. I had a mask in my hand at Home Depot, but hubs said I wouldn’t need it. If your husband says that to you, ignore him and go with your gut instinct on that one. I was wearing my glasses, which helped, but proper work goggles might have prevented any dust from getting into my eyes. I found the dust in my lungs to be worse than dust in my eyes, hence I am urging you to wear a mask. After sanding, I vacuumed the walls and the floor (tile), and then I used a damp sponge and wiped down the walls. Some people suggest you use soapy water. I want to mention that this was not a complete overhaul. I did not sand down popped nails, nor did I fill in the few gaps between the baseboards and wall, but this is the time to do it. If you have mold anywhere, this is also the time to properly clean the mold and not simply paint over it. After sanding and wiping the walls, I lay down the drop sheet and threw a garbage bag over the toilet tank.

I read many comments about not wasting time taping, but being a first-time DIYer, I wasn’t taking any chances. Taping takes a bloody long time. I now understand why professionals don’t tape. Again, this project only involved painting the walls, meaning I had no intentions of painting the ceiling or the baseboards. I used the FrogTape brand because as I stood in the painters tape aisle in Home Depot, I was faced with multiple options. A very quick search of reviews pointed at FrogTape being the best at preventing bleeding.

Let’s do this! I opened the small can (946 mL) of white paint. The guy at Home Depot said that this small pot should cover the space I needed, but he was wrong. I needed more, but I think it’s my fault because I believe my rolling technique was subpar when I started out, and the rollers soaked up the paint. I ended up purchasing another can, but the large can, in order to finish the job. Both paints are paint + primer, which saves me a step. 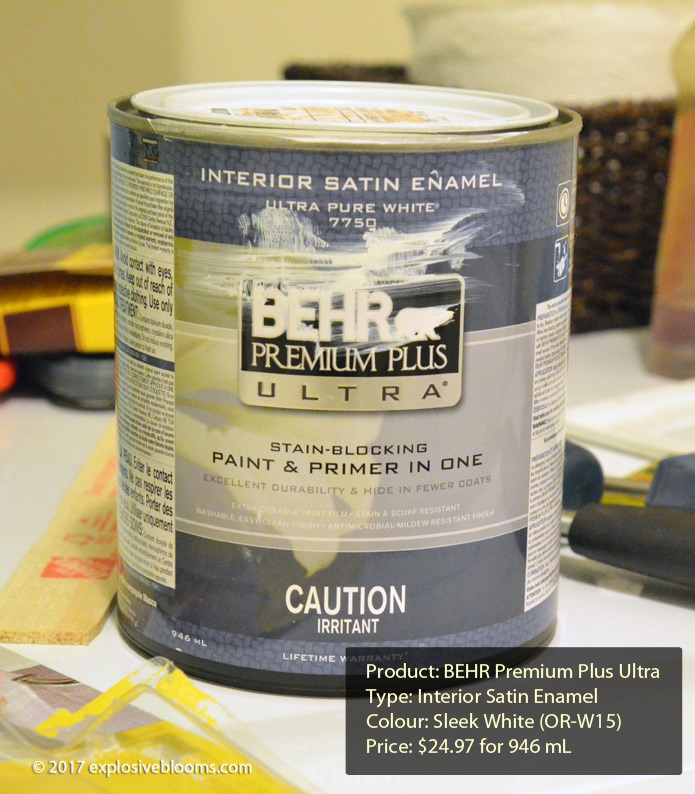 The first task is to “cut in” the edges. This is best done with an angled brush, and with enough practice, I can see how one can get the job done without taping. It’s important to either have a small roller handy, or ensure you feather your line so that you are not left with any sharp lines.

I found the following videos quite helpful. The first video does a good job of explaining how to cut in.

In this next video, the guy uses a combination of brush and roller.

Finally, this guy makes it look so easy! And I took his tips on taking good care of your brushes. My brushes and rollers were cleaned thoroughly after each use, and they are ready to be used again.

Since I was working with so little paint, I found it difficult to use the small roller, so I quickly scrapped that method and stuck with paint brush only. 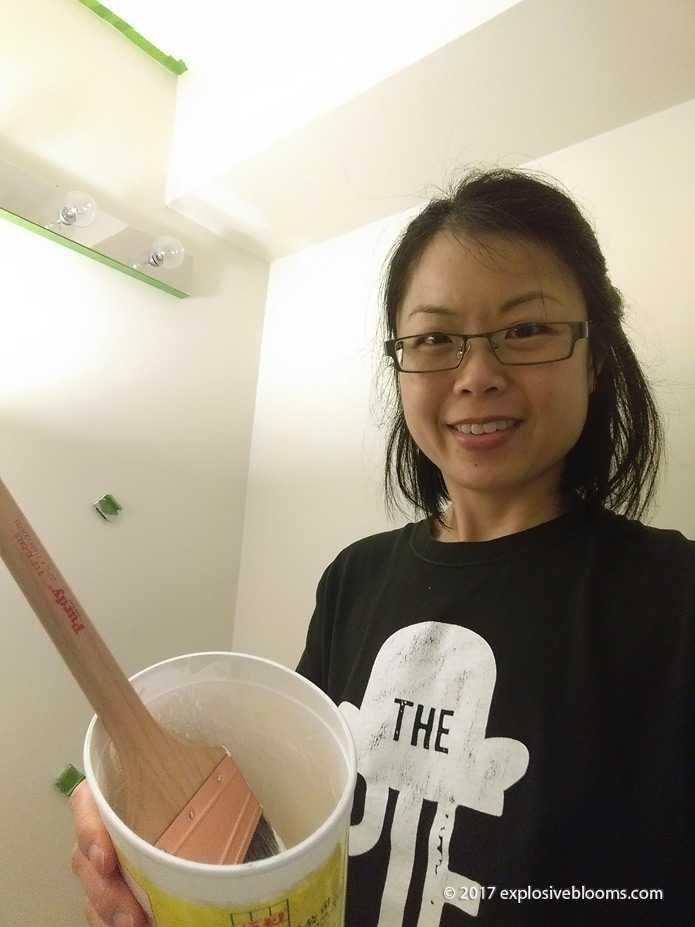 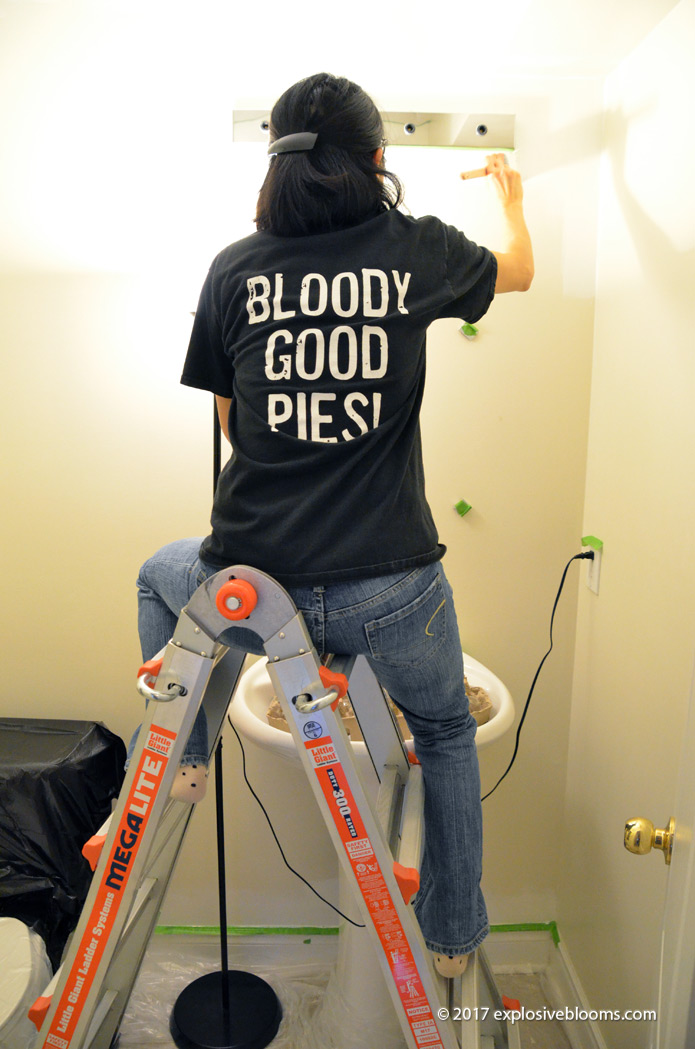 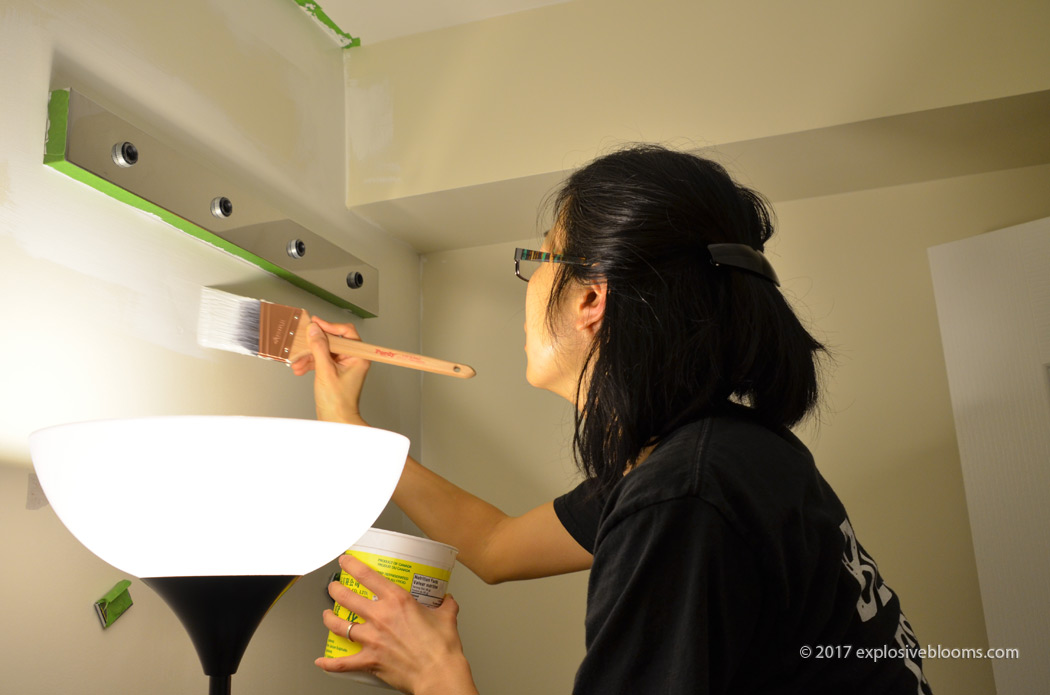 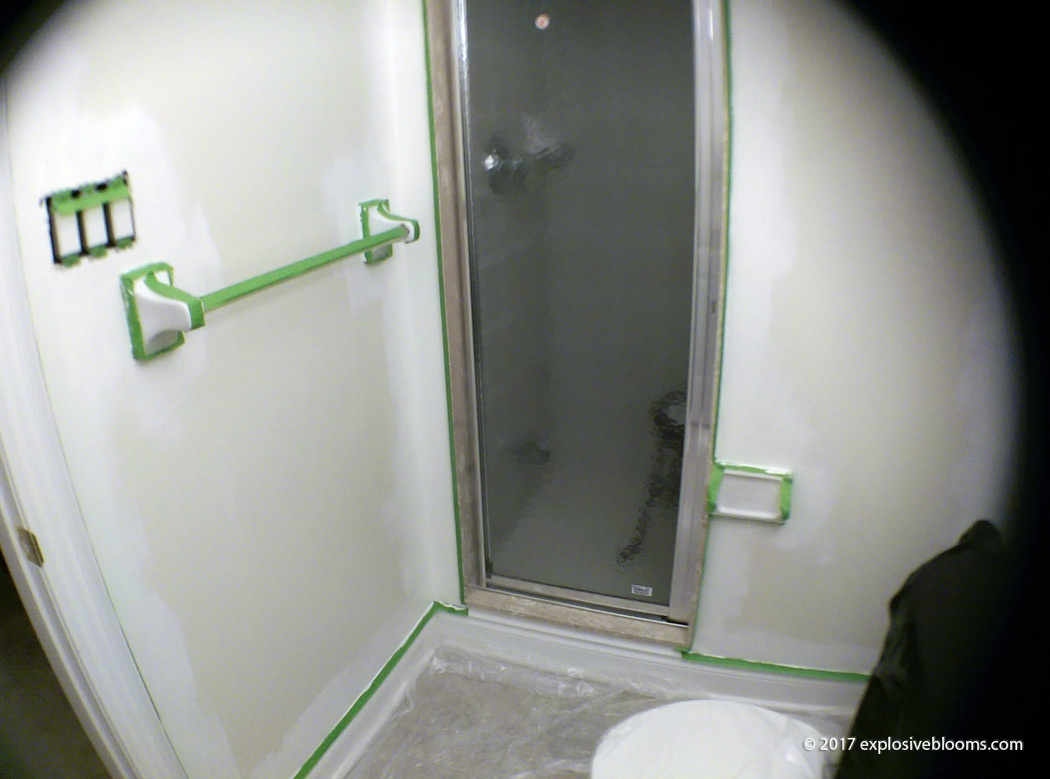 What I learned from cutting in is that you really have to trust the experts in the video. Don’t skimp on the amount of paint because after I put on the first coat of paint, I noticed that the cut-ins looked a bit light. So I went back over and did a second cut-in. The process went by faster, but I’m still not going to win any speed contests. 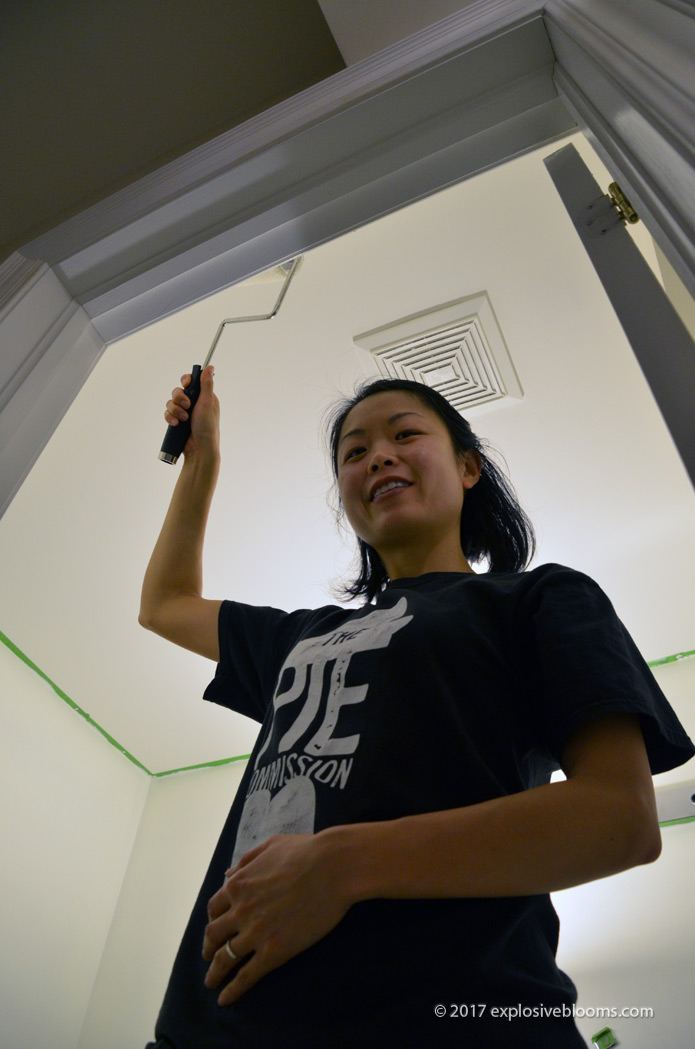 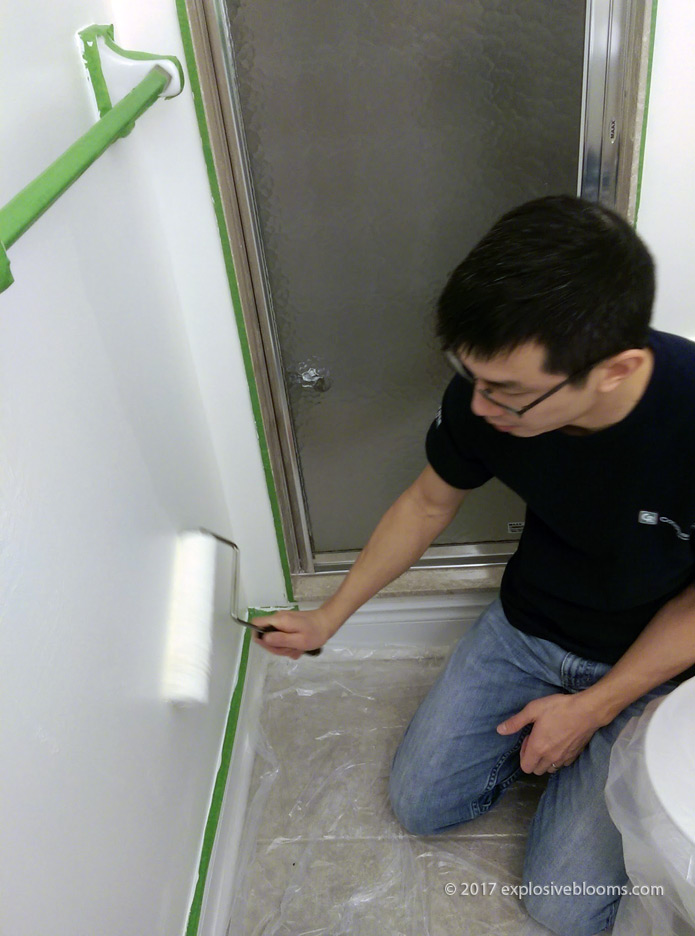 After a couple of hours, we carefully pulled off the tape. I was anxious and excited, and I will agree that FrogTape does a good job. There was no bleeding – the lines were crisp. The tape on the ceiling did pull off some ceiling paint, but I touched that up later.

The next task was to tape my newly painted wall so that I could cut-in my accent wall. I’m using Lavender Wash (MQ4-30) in BEHR Marquee. The 939 mL can was sufficient, and it costs $24.97 at Home Depot. I only needed one coat to get the true colour. I’m not sure if it’s because the colour is much more noticeable, or if it’s the formulation, but as it was going on, I was not feeling good about how it looked. As I was rolling on the paint, I could see lots of stroke marks, and it looked a little splotchy, but as soon as it dries (fairly quickly), it evens out. It’s like magic! I only had to do some small spot touch-ups using a foam brush at the end. 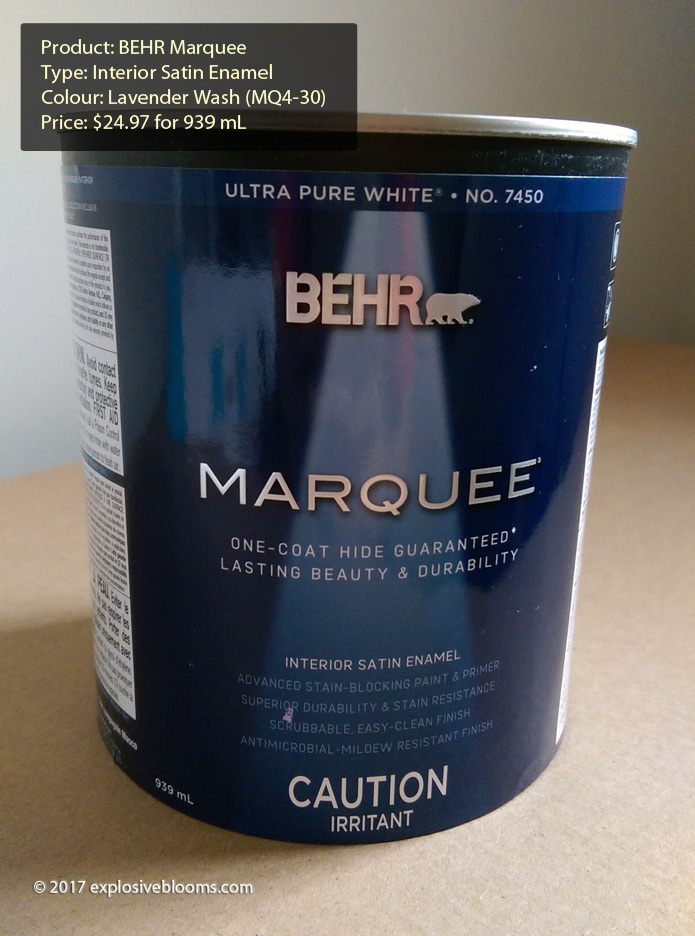 I will say that painting the underside of the bulkhead was tricky with the brush. Dripping paint was an issue while cutting in, so I transferred to a smaller brush purchased from Canadian Tire.

As soon as I was finished painting the wall, I immediately removed the tape as I was nervous that the longer I allowed the tape to adhere to my freshly painted white walls, it could cause the paint to peel during removal. My worries were unfounded, and everything looked great. I am so pleased with the outcome and with the colour choice! 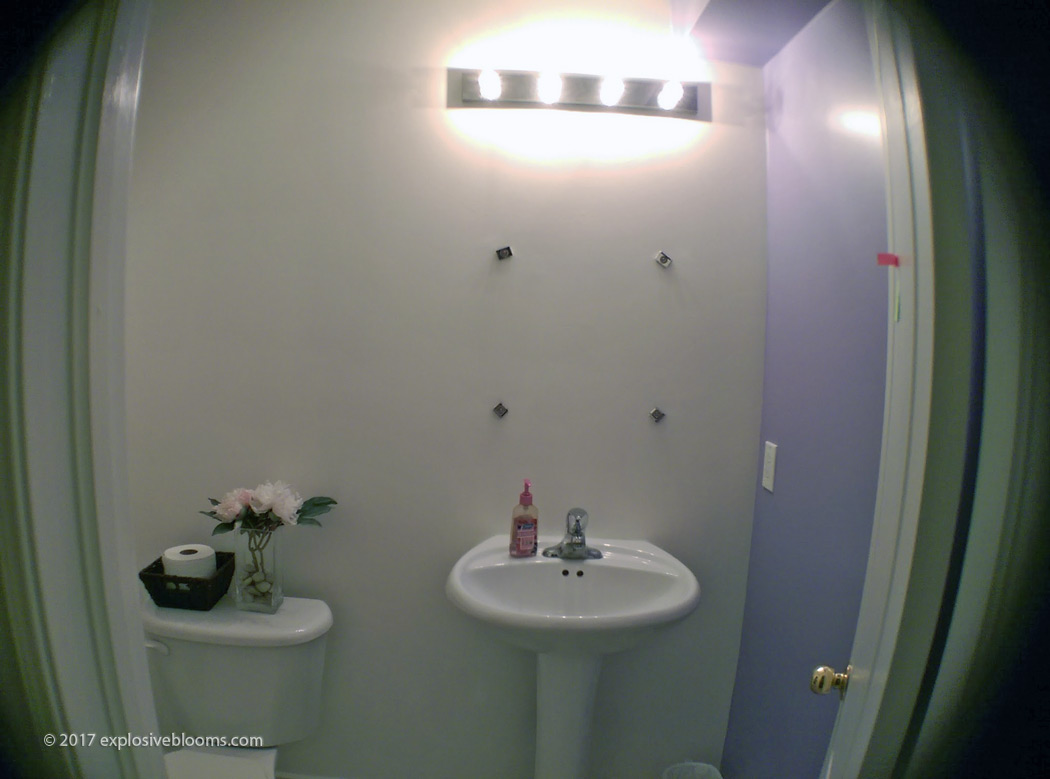 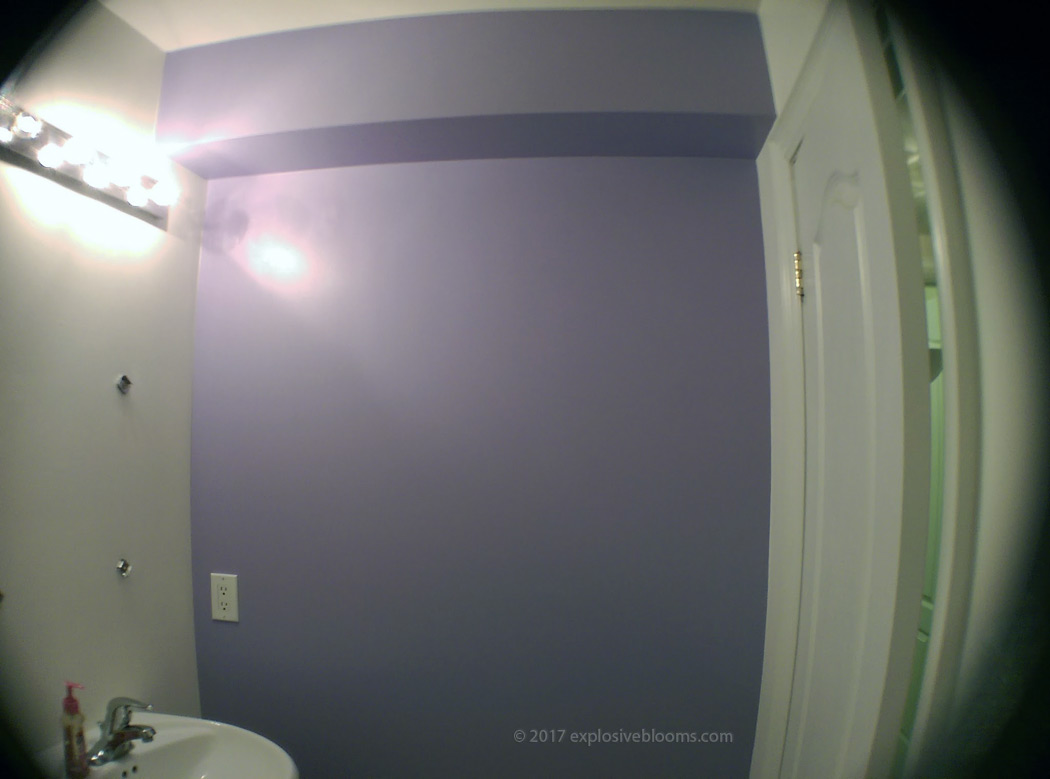 The joke between me and hubs is that before Christmas, I had said that 2017 was the year I would paint the entire house. As I mentioned in a previous post, the paint is still the original builder’s paint. The colour choice is fine, but it’s not wearing well in high-traffic areas, and I’m ready for change. Hubs had suggested I start small, and commit to painting the bathroom first. During the sanding process, I told hubs that this was probably the first and last room I will paint. But the thing is, sanding and taping are the “bad” jobs. The painting part is actually ok. Cutting in takes me time, but rolling goes by fairly quickly. With the lower ceilings on this first floor, the short handled roller was ok, but an extendable handle for the rollers will be necessary for spaces with high ceilings. It’s so much easier to paint with two feet planted on the ground versus straddling a ladder. I’ve also learned that you can’t be stingy with the paint when cutting-in. Follow the directions from the pros and dip your brush in, and only lightly tap to remove excess paint. Don’t get too hung up on the W of M or N when using the roller. You will find a rhythm that works for you.

My neighbour is a professional painter, and he’s a great guy. I’m sure he’d be able to get the job done much faster than I can, and he can probably get paint at a better price. I may get a quote from him for the other floors of our house, but I’m willing to give painting another shot and paint our foyer. These walls shouldn’t require sanding, since they are a flat paint. I’ll still tape, though my cutting-in is improving significantly.