Although we have a den, we’ve always had my desk in the guest bedroom. Our guest bedroom was furnished with some of hubby’s bachelor furniture. The desk dated back to his university days and was an Ikea desk. The bed and side tables where also from Ikea. From the previous posts, you’re probably now thinking that our entire home is an Ikea showroom!

We are a quiet couple and rarely do we throw parties. It’s even more rare for us to have overnight guests. In fact, only one person has ever stayed the night in our guest bed. Clearly this second bed was a waste of space.

Hubs had his desk in our family room because this allowed him to be on his computer and watch television at the same time. He also didn’t want to be too close to our bedroom because he sometimes stays up later than me, and he doesn’t want the light to wake me. The thing with having a computer is it is typically accompanied by wires, lots of unsightly wires. It’s not that I’m concerned that our rare guest will find it messy, but I was starting to feel that way. Do you see where this is leading?

I’ve searched through all my old photos, and it is shocking that I have no photos of this guest room/my office. This is the best I can offer. This is what my desk looked like. This was hubby’s desk from university. Aside from all the stains and chips on the table top, it’s a solid table. In the corner sat a printer, which had already been moved before this photo was taken and now sits in the foreground (you can see the corner of it on the right). I don’t know if that rug protector was from his university days, but you can tell it’s very old from the discoloration. 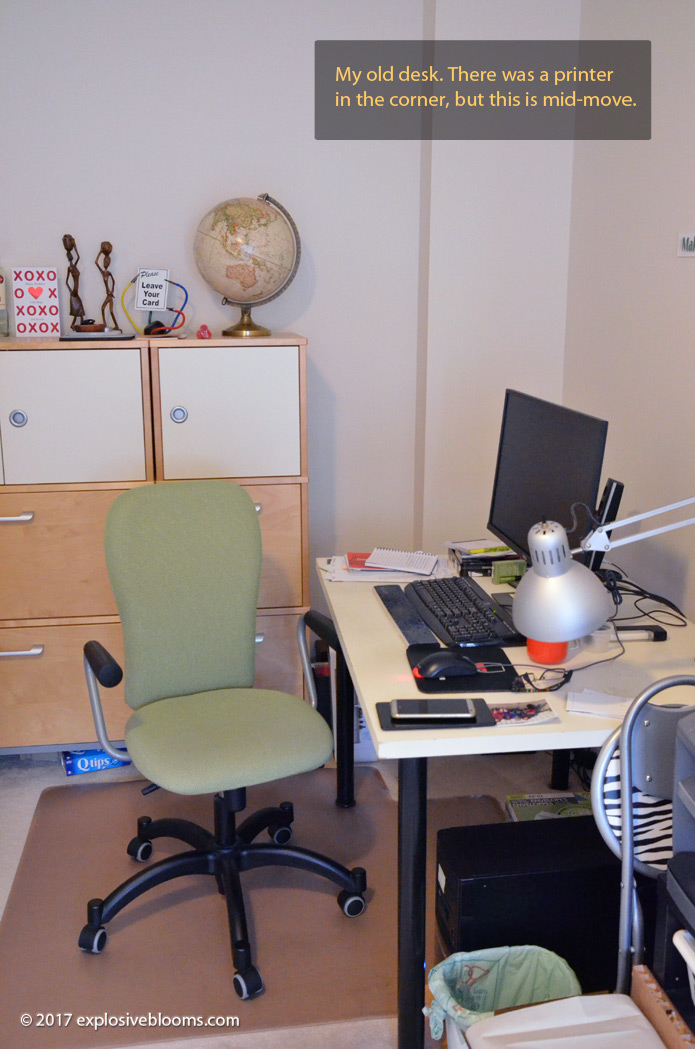 To the right of my desk, where the printer station now resides, was the bedside tables and guest bed. This was hubby’s bed from before we moved into this house. Yep, Ikea. 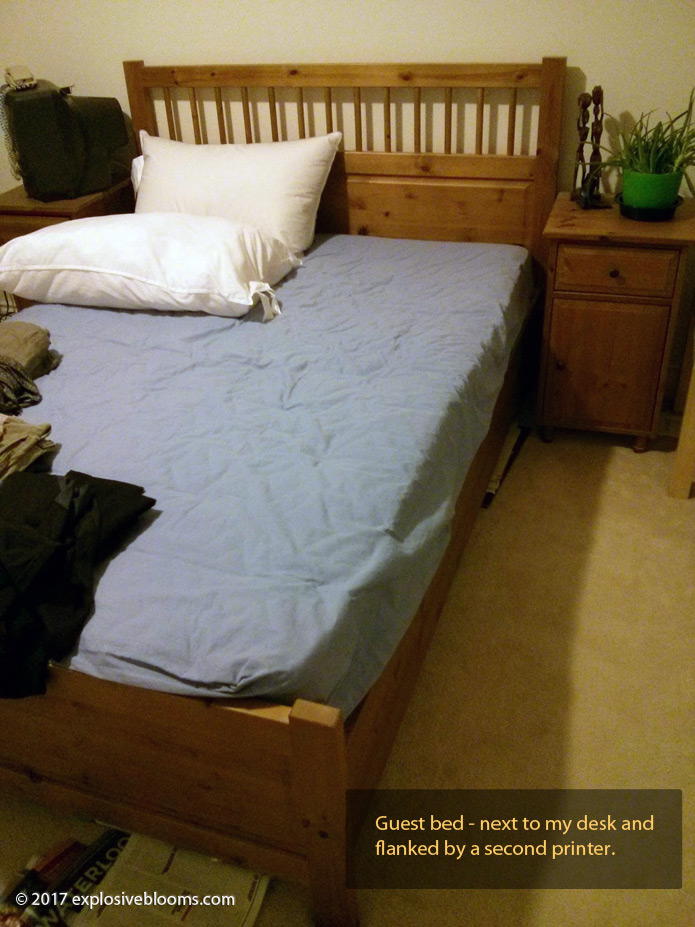 The guest bed was disassembled in late 2015. Hubs purchased the BEKANT table top ($69) and legs ($100). He liked having the two legs versus four – do you know how many times I’ve banged my knee of the table leg? This workstation replaced the bed as he wanted to have a window seat. 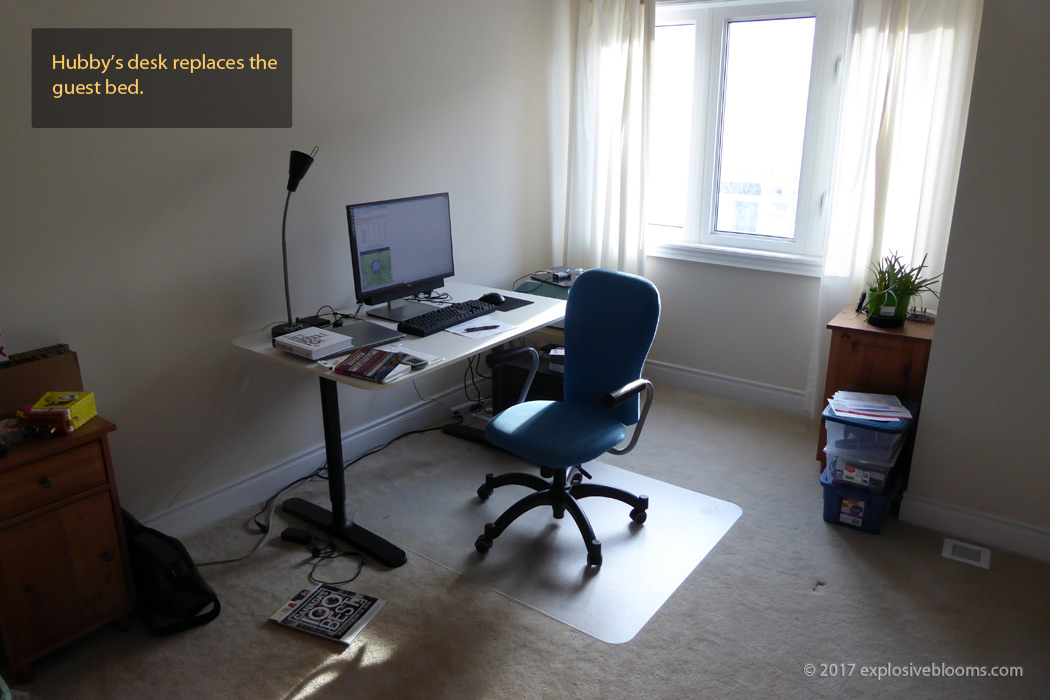 He quickly realized he needed more storage space, so back to Ikea for the GALLANT cabinet ($169). 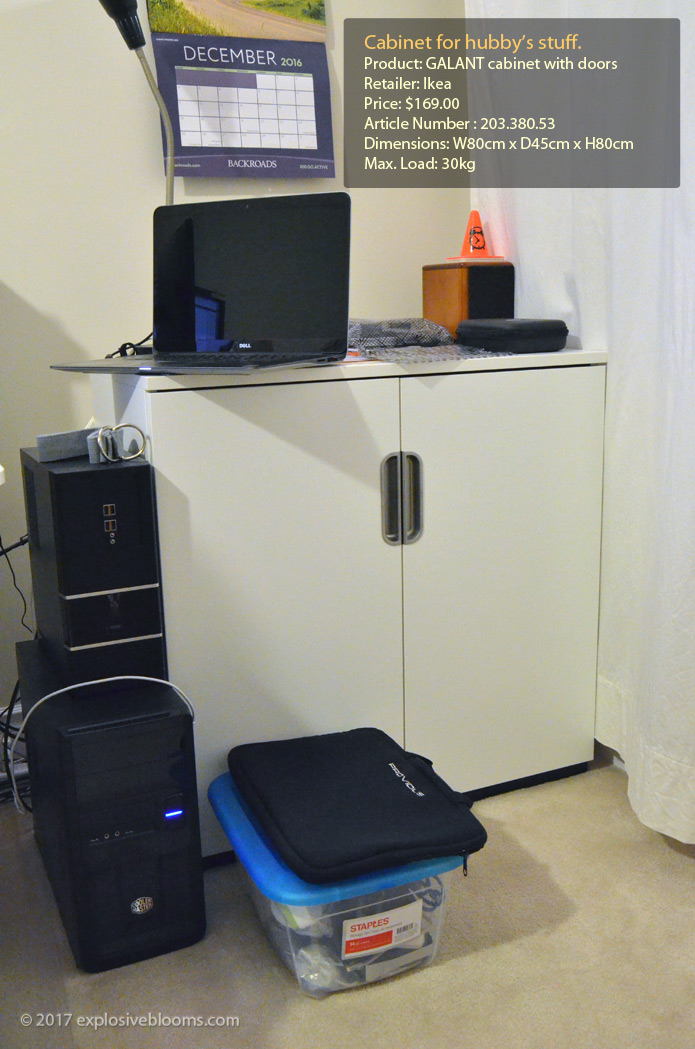 And then we decided that we should have some type of extra sleep space option for the unlikely overnight guest. I thought a murphy bed would be great, but it would be a costly option. We decided upon a condo-sized pull-out sofa and we visited so many different shops to find the perfect sleeper-sofa. The ones I liked most were very expensive, and given that we probably wouldn’t even use the sofa much anyway, we couldn’t justify spending thousands of dollars on this piece. We found ourselves at The Chesterfield Shop around Boxing Day 2015. We spent a lot of time walking through the showroom, in search of that magical sofa bed, and then I noticed a bench-style piece of furniture. Curious. I sat and it was comfortable. I stood to see if the cushions would lift, and that’s when sales rep Dean approached me and told me that this was a pullout ottoman. Fascinating! I beckoned for hubs to come over before I had Dean demonstrate how it opened. It’s simple, and the ottoman opens into a double-bed. For a pullout, it didn’t feel uncomfortable to lie on, but we only lay on it for all of five minutes. We took down the measurements to determine if it could fit on the opposite facing wall from our desks. As soon as we arrived home, we grabbed the measuring tape and it JUST fit. That ottoman was made for us! I believe we got some boxing day pricing. We picked out a neutral colour, durable fabric and made payment. Delivery took a while. I don’t think we received it until March? But there was no rush for it anyway. I should mention that even though this thing is more compact than a sofa, it’s still heavy as heck. I don’t think we’ll be moving it ourselves, ever. I don’t recall how much we paid, but it was a good deal. 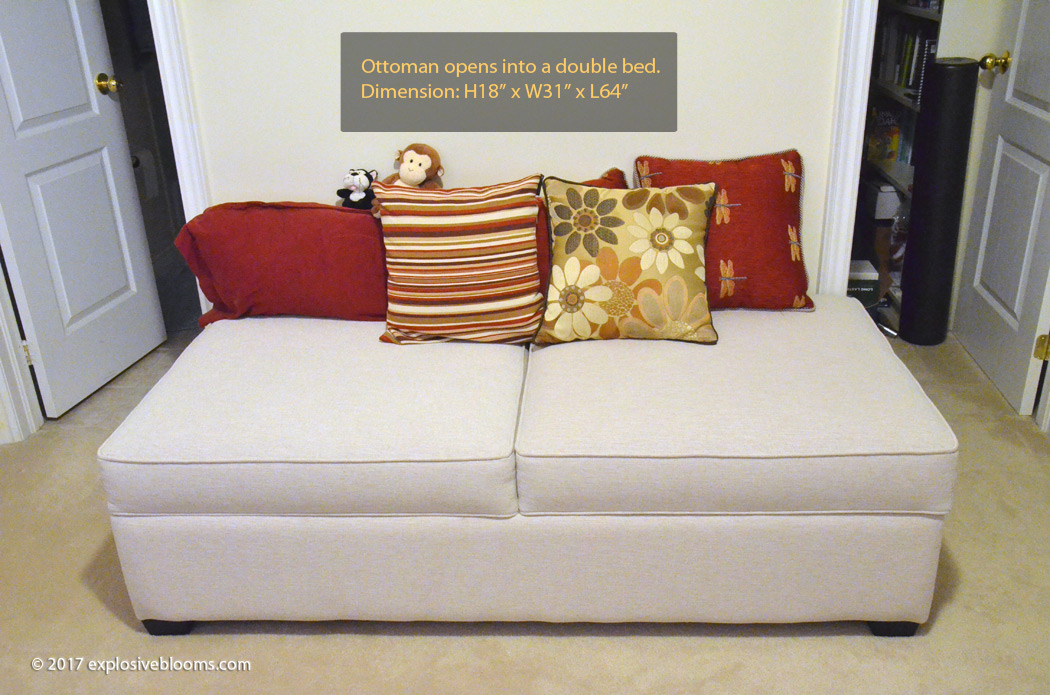 We finally finished the last of the upgrades in late December 2016. Purchases from Ikea were made as part of the foyer/laundry room improvements. We picked up the KALLAX shelf ($79.99) and included two sets of drawer inserts ($20 each), plus the LEKMAN box ($14.99). We opted to keep the bottom shelf open for the sub-woofer. 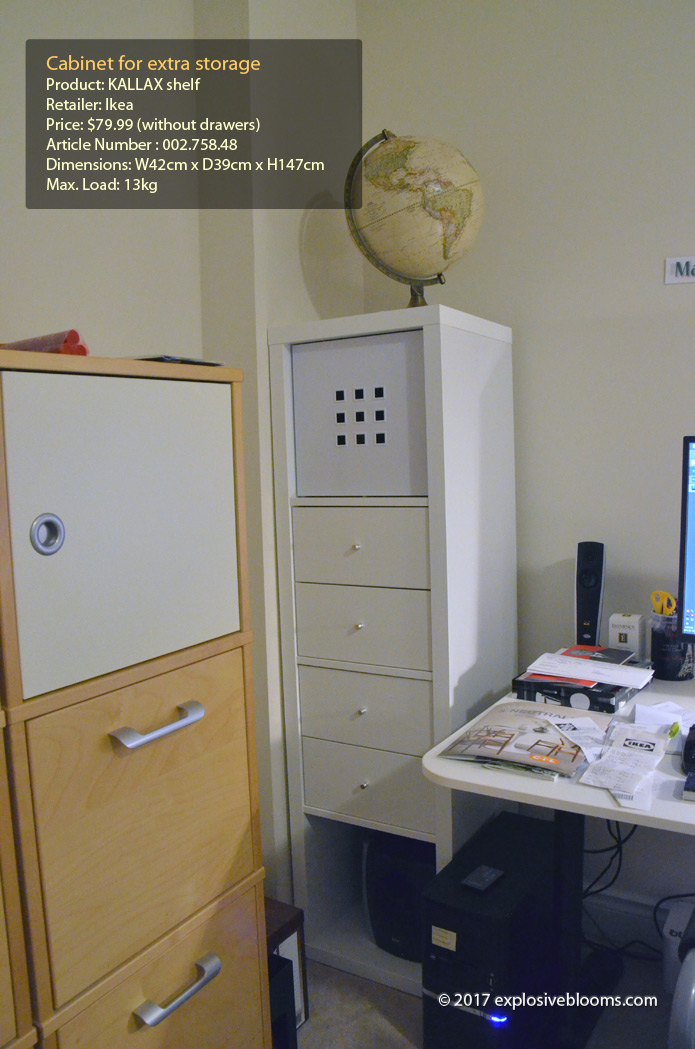 In addition to the shelf, hubs purchased the identical BEKANT desk for me, and a brand new KOLON floor protector ($29.99). I am so happy that I can see the carpet again! 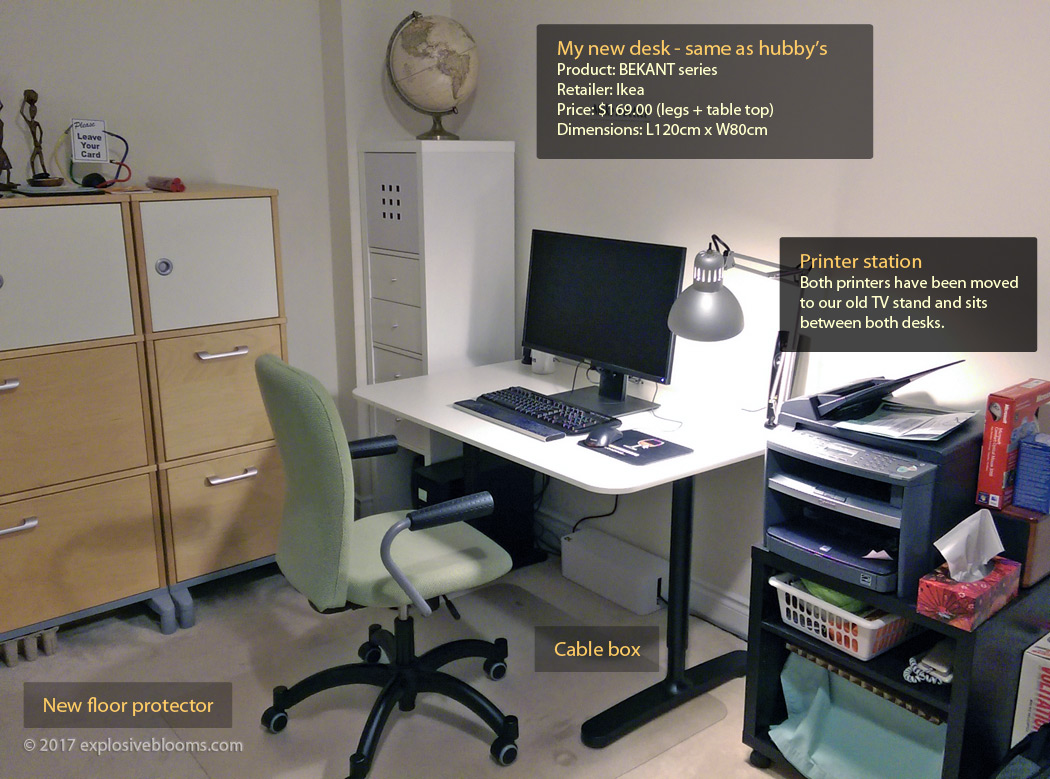 I don’t even consider this space a second bedroom anymore. It has officially become the office. Or the Ikea room.

It is nice working side-by-side, although I think he is a loud typer, or his keyboard is much louder than mine. I’ve gotten used to it. 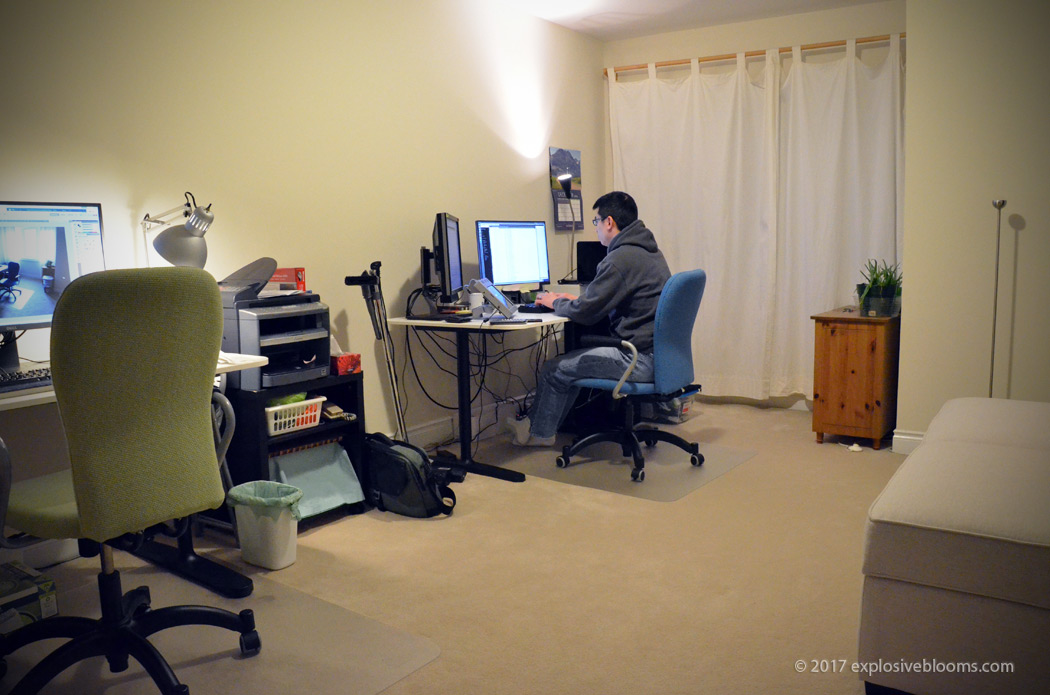 I’m glad we found the ottoman because it’s less imposing than a sofa. The ottoman is very basic and clean with no particular style type, meaning it won’t go out of style. We rarely use it, and we’ve never opened it up to sleep on, though maybe we should, just to be sure it isn’t awful, or broken.

Paint and pictures will complete the room, but those will take time.