With spare time together, hubs and I have been doing some home improvements. We’re starting small, and decided to tackle the first floor and our office. As I take a look at the changes, I can’t believe it’s taken us so long to get around to them!

The first step was discussing how we could better utilize the spaces. We agreed on a vision, and after some online searching and some measuring, we made a trip to Ikea. Ikea doesn’t always have the nicest furniture. I can usually identify an Ikea piece quickly as they have a certain look. Their stuff is functional, but not unique or classic. Although I could never decorate my entire home with Ikea furniture, they are affordable and generally durable. 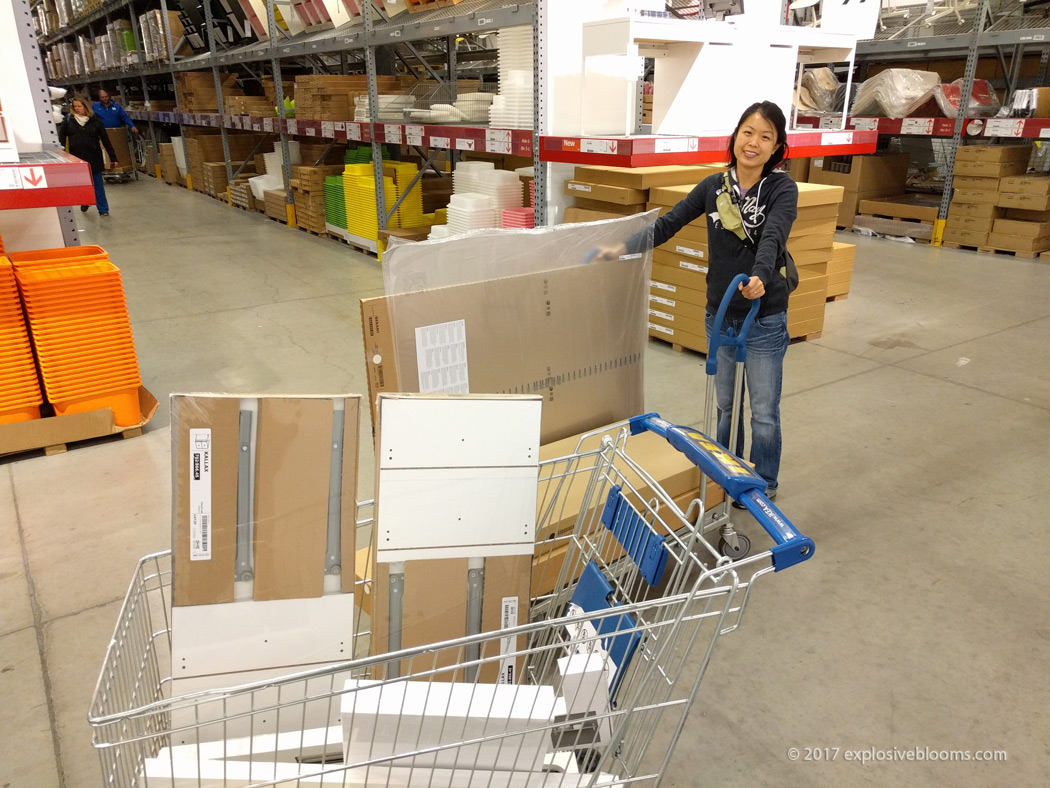 Our trip was a success, and we got everything we needed. We spent about $600, which covers the furniture for our office, foyer, and some things for the laundry room.

Our foyer is a decent size for a townhome, but it has never looked finished/polished. The rug was getting really worn and the not-really-a-shoe-rack rack was falling apart. The bench suddenly felt too small. It didn’t help that I was in the middle of a basement purge and there was stuff to be discarded/donated/sold lying around. Shoes are everywhere. I hate the light fixture in the foyer – it’s so ugly and the lighting is so dim. The wall paint is scuffed up. In fact, our entire house is still covered in the original builder’s paint. The colour itself is not a problem, but it’s not good quality paint so it doesn’t wear well over time.  But small steps. 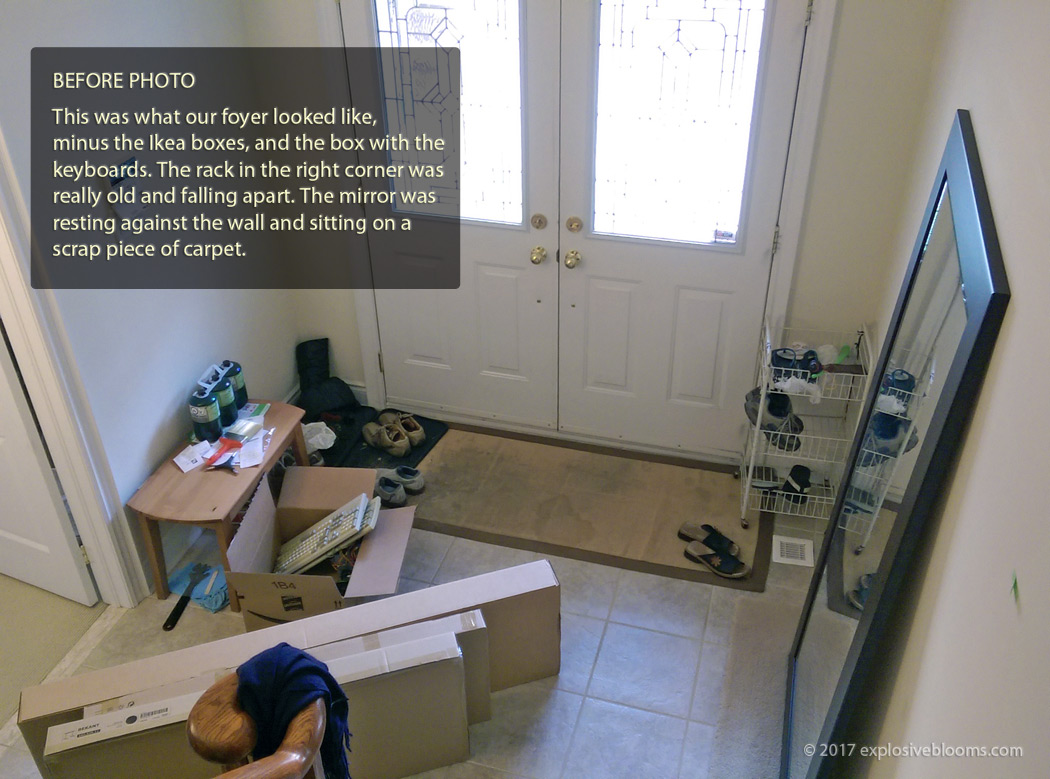 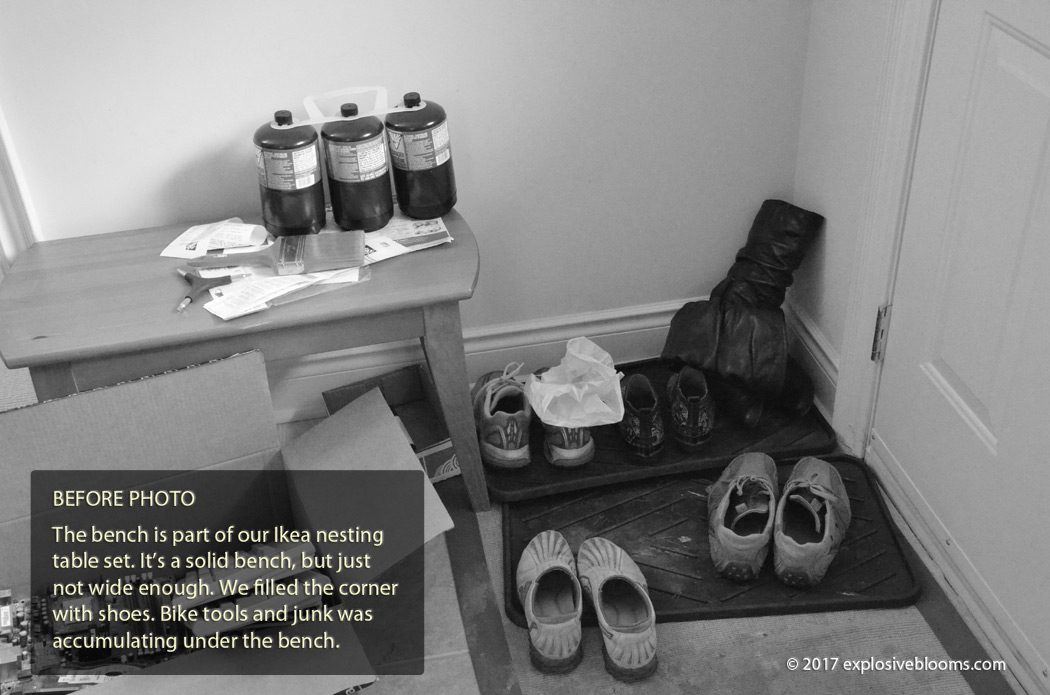 Pulling up the floor mat was a task in itself. I had to peel it off the floor, as the non-skid material on the underside had baked onto the tiles. I used a bucket of soapy water and a lot of elbow grease, but not all of the rubber was coming off. I then took a scraping tool and some acetone, which helped lift the remaining bits. The mat was replaced by a shorter mat with a similar look. We built the new bench, the TJUSIG, which cost $99. It’s a much better fit for that space, and we can now store shoes underneath. The product comes in both white and black. 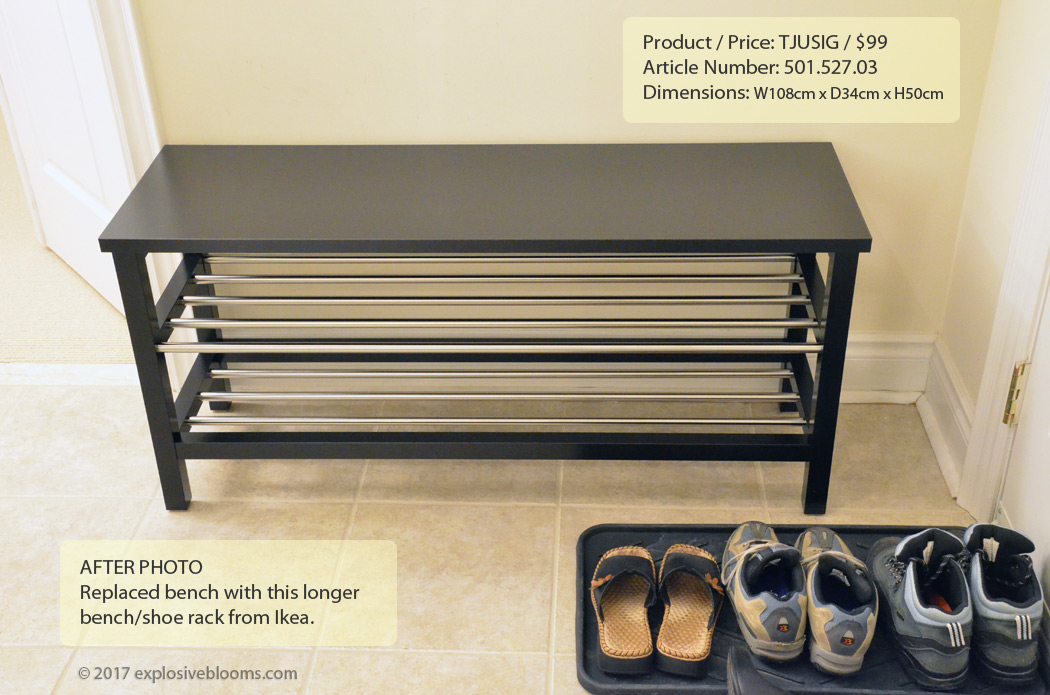 The full-length mirror was purchased when we first moved in. I wanted it when I saw it at G.H. Johnson Trading, where we purchased our bed frame. We tried hanging it once, but I can’t remember what happened. Maybe we didn’t have the right anchors? Nevertheless, it has remained on that same piece of scrap carpet since we moved in, with holes drilled above – a constant reminder that it belonged on the wall. Hubs purchased some new anchors from Home Depot and I was surprised to learn that he was only installing one screw to hold up this 40-pound mirror! It was amusing watching him hang from the screw to test its holding power. The mirror is up! 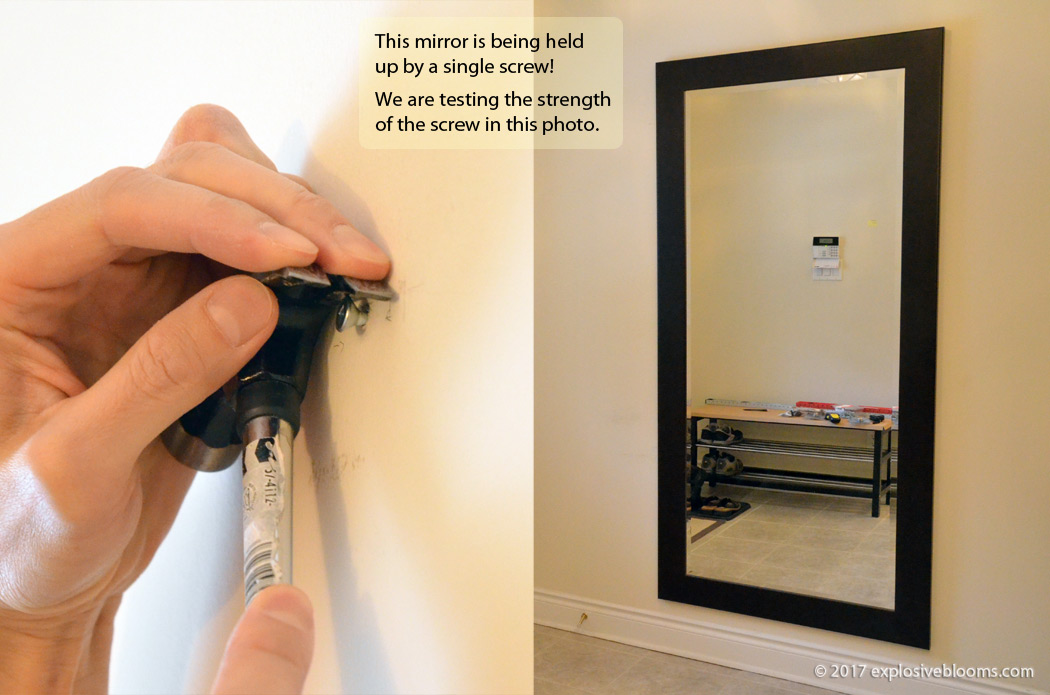 With shoe storage taken care of, we tossed the wire not-really-a-shoe-rack rack, freeing up that corner. It gave me the idea to add hooks to the wall. You’ll notice in the before photo, there is a scarf hanging at the bottom of the banister. That’s not an uncommon sight. Sometimes when we get home, and we only have a light jacket or scarf, it just gets strung over the banister. We had discussed putting a coat tree in that corner, but neither of us could find one that we liked. Everything we saw was either too bulky or too ugly, or both.

We had purchased wall hooks from Ikea, but they were meant for the laundry room, and I didn’t feel they had the right look for the foyer. A quick trip to Home Depot solved this problem, and we ended up with Nystrom Large Double Hooks in Bronze ($7.20 each). Hubs looked for studs with his gadget (I had to make jokes about that), drilled and anchored, and successfully installed the hooks. The hooks are actually in a great place. The other day I had walked home in the rain so my coat was wet. It dried quickly because the hooks are directly above the vent. 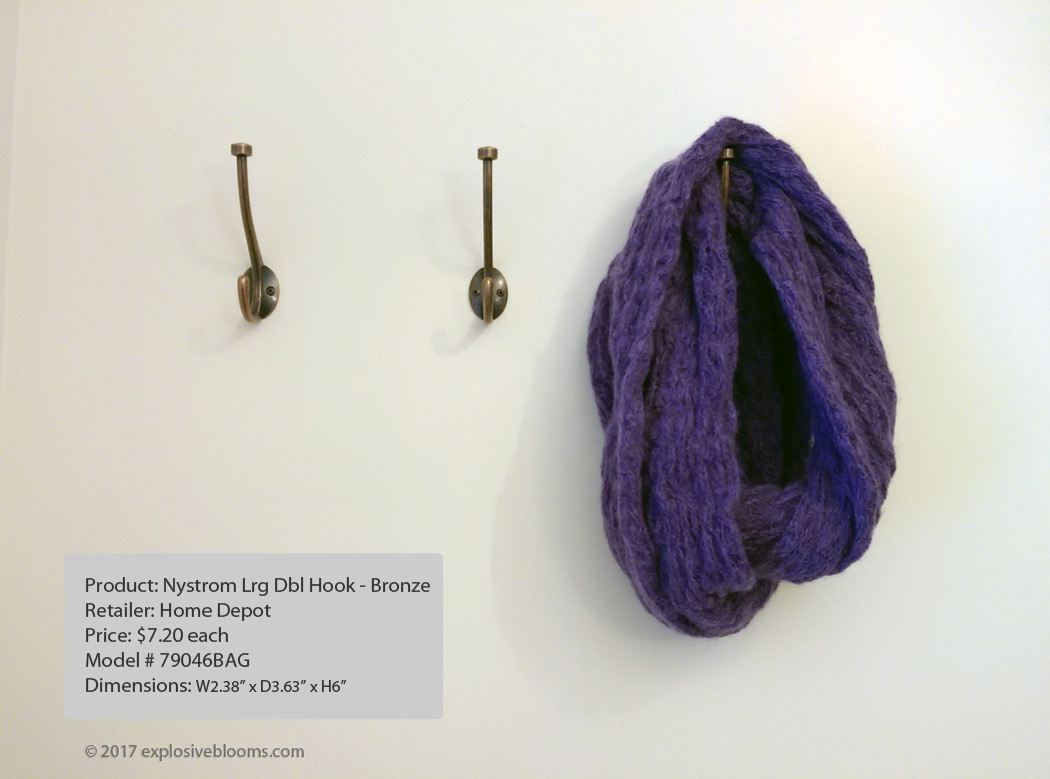 We ended up swapping out the rug and the shoe trays. I was hesitant to step on the rug with the slush and mud on my shoes, so I was awkwardly taking off my boots on the porch. So another trip was made to Ikea, where we purchased the LYNÄS door mat ($8.99). The 98cm x 65cm mat is the perfect size. It has a latex backing, which I hope will not leave a residue on the floor. And most importantly, it’s not an attractive rug, so I don’t think twice about stepping on it with dirty shoes. 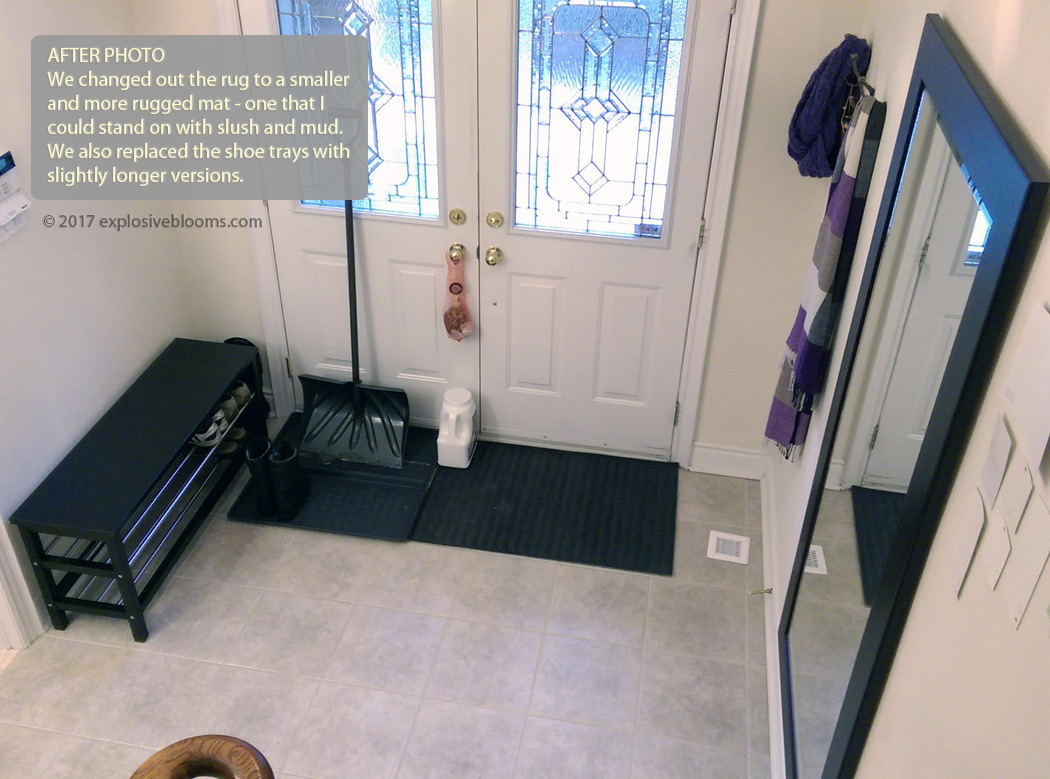 In addition to the rug, we replaced the shoe trays. The ones we had were on the short side. The BAGGMUCK shoe trays ($3.99 each), also from Ikea, are slightly wider and shorter than our original trays. At 71cm x 35cm they align almost perfectly with the rug.

the light fixtures are still things we need to change, but that may take some time, and it won’t be an Ikea find. Painting will also need to be done at some point, but our plan for painting is to start small, since I have very little painting experience.

Overall, I am happy with the improvements made to our foyer so far!