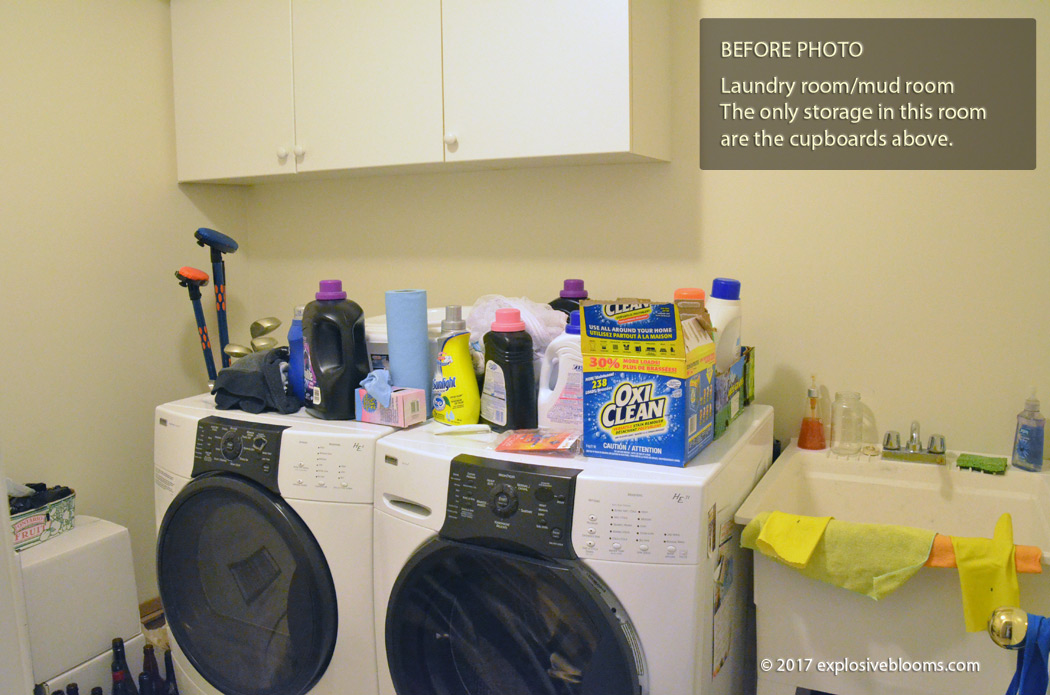 After making changes to our foyer, we were ready to tackle the laundry room. The space was becoming too cluttered with sports equipment, gardening tools, and recycling of all kinds. Our laundry room also acts as the mud room as it is the point of entry from the garage. There are three cupboards above our washer/dryer, but that’s the extent of proper storage space. Once the laundry machine has completed the spin/dry cycle, clothing either goes into the dryer, or most commonly, the clothing is taken into the den and hung in the closet to dry. This isn’t actually a problem. Our house isn’t big, so the walk into the next room with a hamper of damp clothing isn’t causing physical discomfort. But we have been thinking about how we could transform the laundry room into a more proper laundry room. We’ve been throwing around ideas for a while now, and we finally decided to take action. 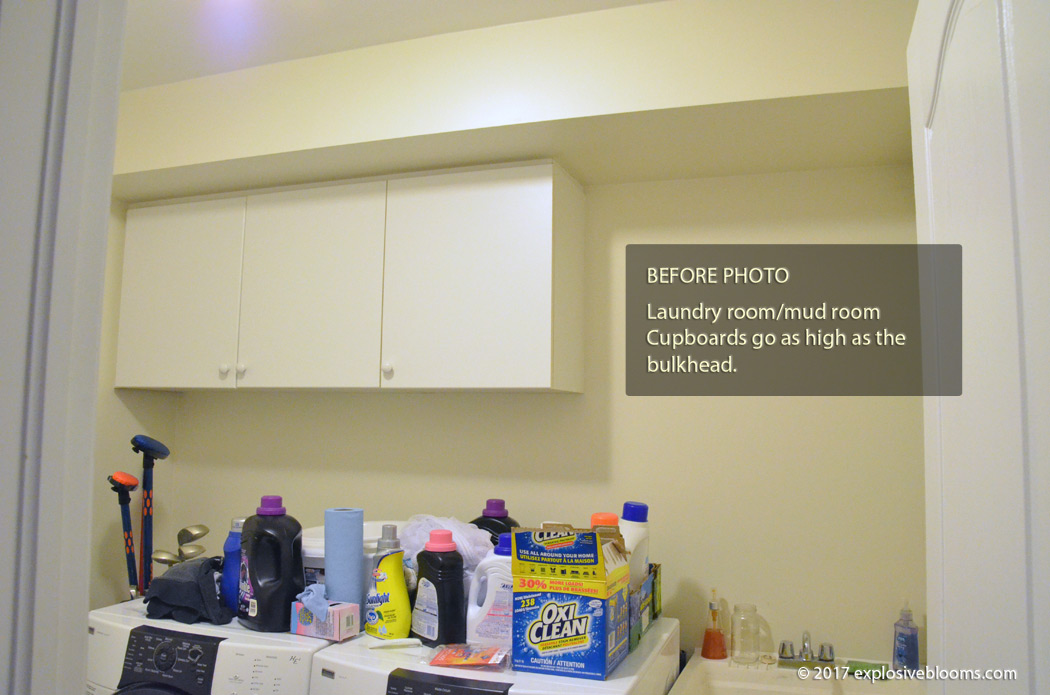 As you can see, our cupboards do not hold that much, given that we have lost vertical space to the bulkhead. The two cupboards on the far left do not even contain laundry-related items. We store the garbage bags and other tool accessories (screws, nail, etc.) These are hubby’s cupboards, and to be honest, the way stuff is crammed in there, I have no idea how he finds things. It doesn’t bother me – I can’t even reach inside those cupboards. The one on the right has laundry related things, but I can only reach (just barely) anything on the bottom shelf without a step-stool. That explains why everything sits on top of the machines, but it doesn’t explain why we have so much detergent! Below is a picture from another angle. 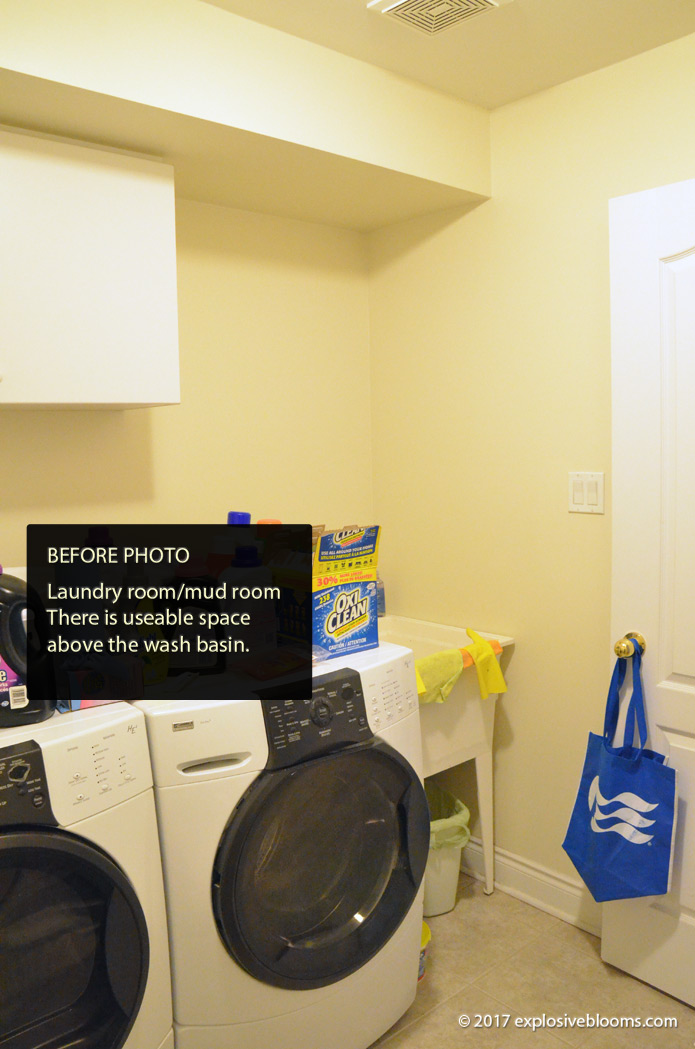 You might have noticed the golf clubs and curling brooms in the first two photos. Good eye! There’s a gap between the dryer and the wall. 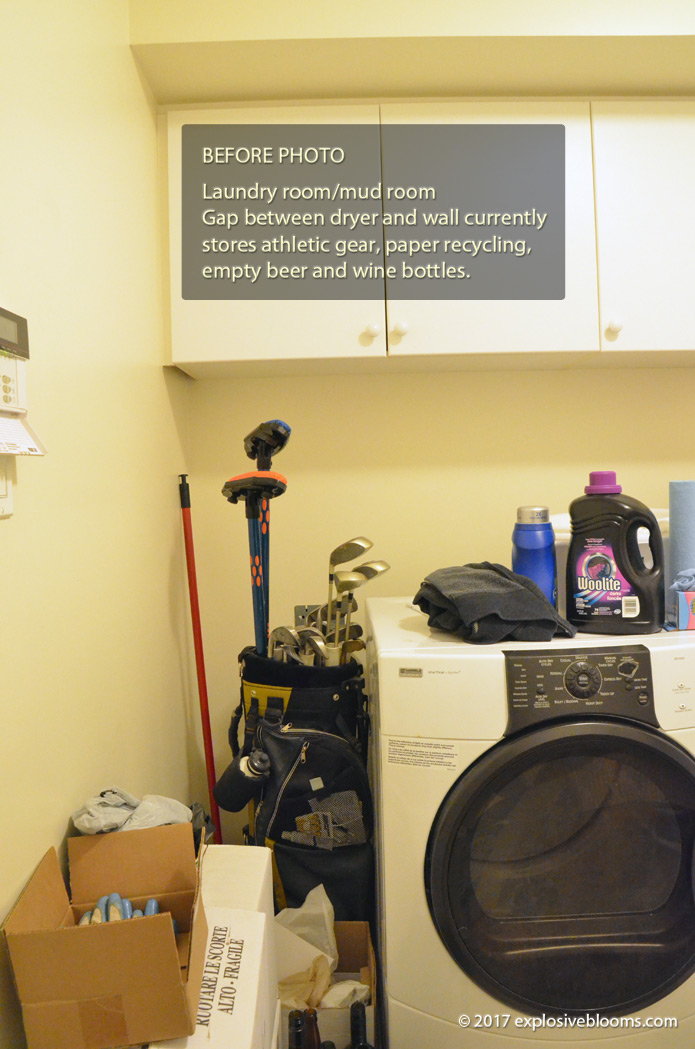 Opposite the dryer, where I am standing to take this photo, is the entryway into the garage. The door can almost open fully, but you are greeted by empty beer cans/bottles, and a box with random things (sports shoes, car tools, frisbee), and there was a square flower planter that was holding some gardening tools. That was already re-organized before this photo was taken. 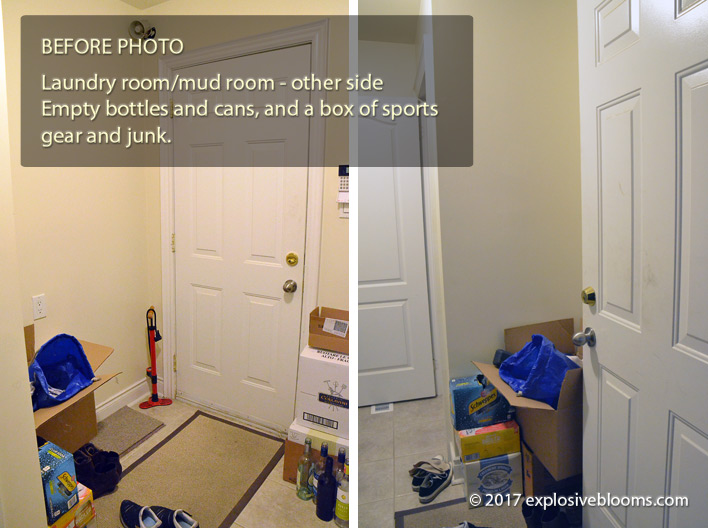 As an aside, I also spent time clearing out the basement and reorganizing our “general store” as hubs calls it. We purchased another shelving unit and I created The Garden Centre. Before this happened, pots of all sizes were taking up precious floor space, and other gardening tools/accessories were thrown into all different types of boxes and scattered around in different parts of the basement. The shelves we are using in the basement to create the various aisles are from Home Depot ($61.98 each). They are very sturdy, 24-inch, 5-level shelves. Due to the lowered ceiling space in our basement, I really only get 4.25 shelves. If you have a smaller space, they have a size-smaller at 18-inch depth (width and depth are still 36″ x 72″). It is made of resin, and is packaged with shrink-wrap. You are required to assemble the unit yourself. No tools are necessary for assembly, though a rubber mallet can come in handy. 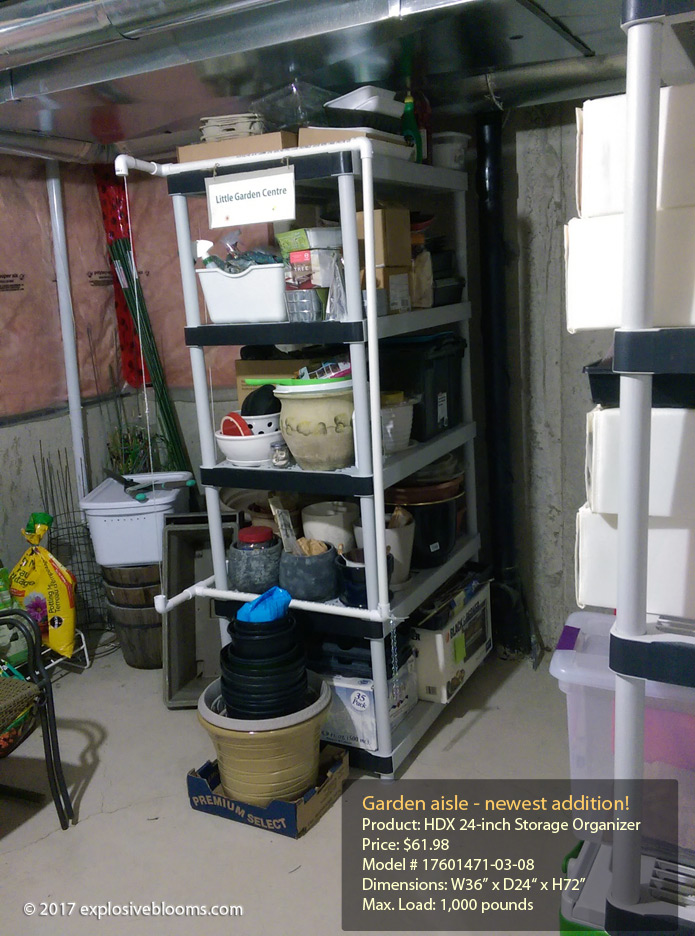 Back to the laundry room…

We originally discussed having some shelving opposite the washing machine, right in front of the outside door, but then I got to thinking about the possibility of having a narrow shelf under the cupboards. At first hubs said he didn’t think it would work, but when he saw some of the shelving options at Ikea, he said we could give it a shot. His concern was load capacity, and too much overhang above the machines. The Ikea EKBY line was perfect for the job. Hubs was not 100% sure how much load the EKBY brackets would hold, but I think one of them is mounted into a stud, so the heaviest item is sitting there. The rest of the bottles are not that heavy. 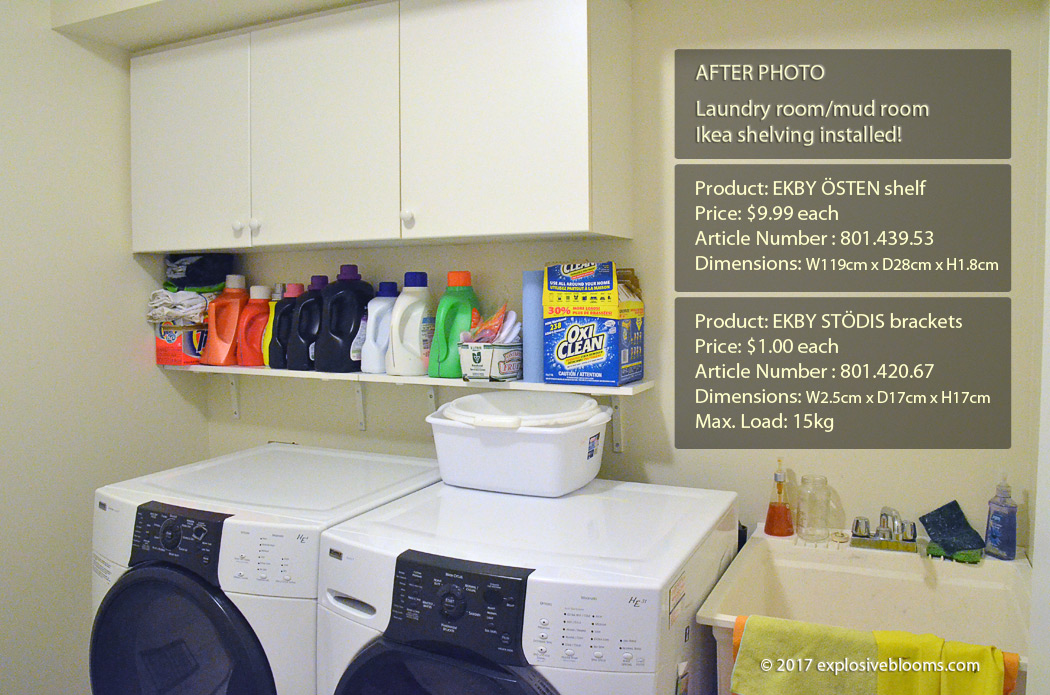 Now that the detergent had a home, we scrapped the idea of putting a small shelf in the gap between the wall and the dryer. Instead, we purchase two plastic bins (tower) with lids – one for empty wine bottles, and one for paper recycling. To keep the top of the machines completely clear, we decided on a shelf/hanger to go in the space above the sink. We ended up with a stainless steel shelf from the GRUNDTAL line ($29.99). There are several different options from this line, but the one we chose was from the kitchen series. We discounted the one from the laundry series ($39.99) because it had a greater depth, which wasn’t necessary. It also had an adjustable width, but that feature was also unnecessary for us. The one from the kitchen series had a perfect width at 80 cm. This shelf also allows us to hang some articles if necessary. 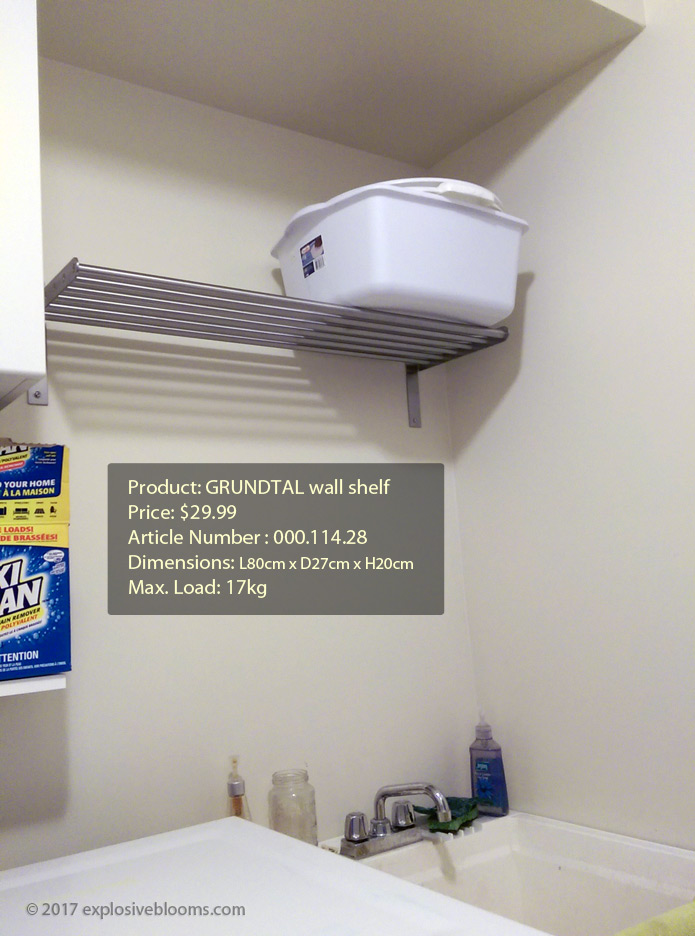 For those that require more laundry drying options, we also came across the GRUNDTAL drying wall rack ($29.99), but we already had a different idea for hanging our clothes to dry.

Since I no longer required shelves across from the machines, and since I now have a new bench in the foyer, I decided to move the old bench into the mud area. It was a PERFECT fit, and I no longer have to balance holding on to the machines while I zip up my boots. The space above could now be use to hand some things. Hubs installed three HEMNES hooks ($5.99 each). We are reusing the original shoe trays from the foyer behind the door. This room never had shoe trays. Shoes were lying on the tile floor, and I had to listen to hubs complain periodically about how he was always tripping over my shoes. 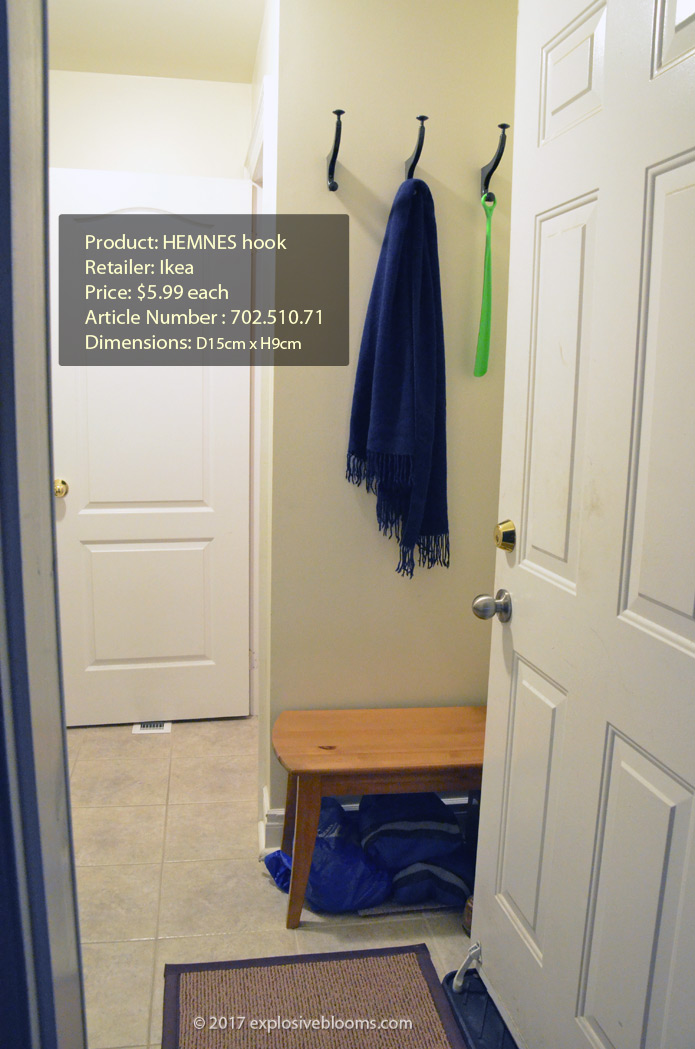 The final project was installing the rod. This was the trickiest piece because placement was key. It had to be able to clear the cupboards even when laundry was hanging on the rod, yet still not be too high that I couldn’t reach. I told hubs I had no problems using a step stool, but he wanted to avoid that if he could. We also had to find a rod that was strong enough, but not too heavy. This required a trip to Home Depot and Michaels.

Hubs is a clever and creative man. He had come up with a solution, but it would require some wood circles for aesthetic purposes (he cares about functionality and style)**. We don’t have the right tools to cut wood cleanly, so I suggested we try Michaels. He found these wood circles, and purchased the cheapest craft paint in white.

**EDIT: hubs just informed me that the wood circles were for functional purposes only. The rod wasn’t long enough without them. 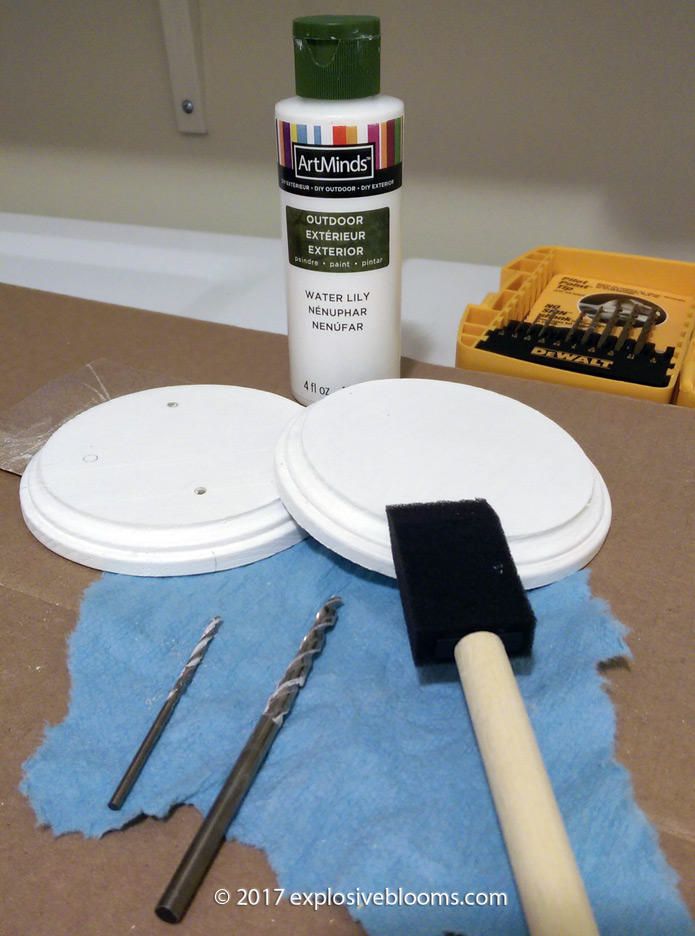 After measuring and measuring again, holes were drilled. Molly bolts were installed. These are cool anchors! You drill them in and they splay out when they are in the wall. Molly Bolt is the trademarked name – hubs purchased them from Home Depot, but they are called hollow wall anchors. The two anchors in the photo are the 3/16 anchors, and the third “decorative” screw uses the 1/8 hollow wall anchors.

Once the painted wood circles were dry, it was drilled into the wall, along with the closet pole sockets ($6.72 each).

Everything was going smoothly, until we were about to insert the rod. The rod was too long! In retrospect, hubs realized it would have been better to hollow out the wood circle, but he took a hack saw to the steel rod. I HIGHLY do NOT recommend this method if you value your fingers!! My stomach was churning as I was helping to hold the rod still. He first tried using cutters, but it was not meant for a cut this thin.

The Everbilt 96 Inch White Closet Rod ($21.33) felt strong enough for our purposes. We originally said we could try it out, and if it proved not to be strong enough, we would return it. No chance of that after hacking off a few millimeters! After trimming the rod, it had a bit of space to slide back and forth in the socket. Not a big deal, but hubs decided to use white electrical tape to wrap the two ends, so there is no movement now. 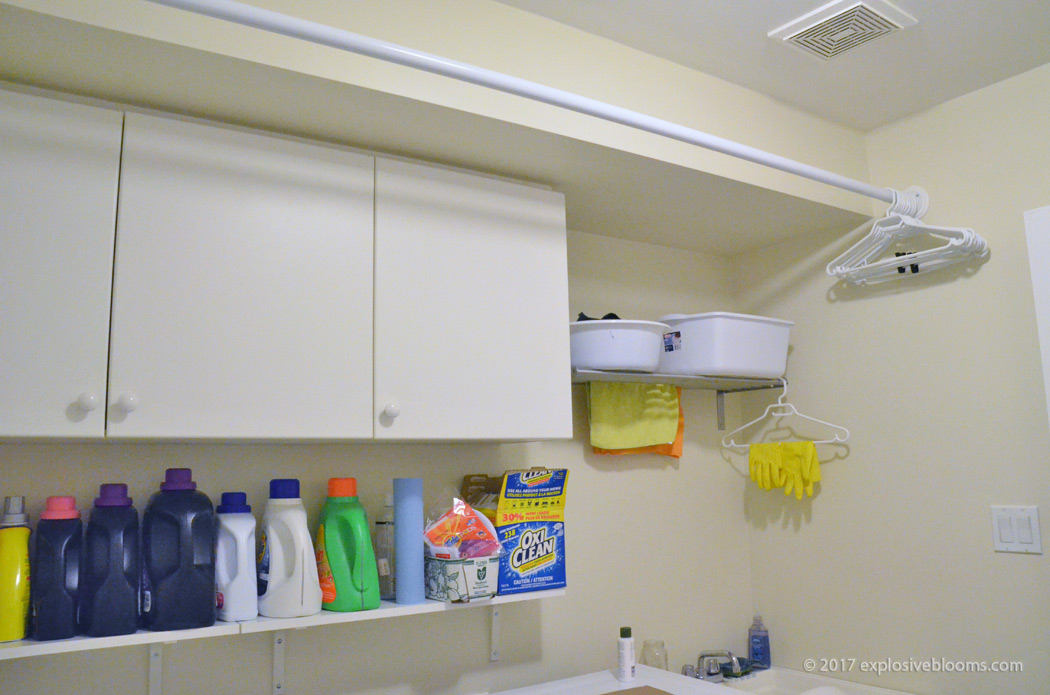 We’ve tested it out with a full load of laundry hanging, the pole does not dip. The cupboards are still able to clear the rod. The position of the rod does not require me to use a step ladder. I’m loving our improved laundry room! 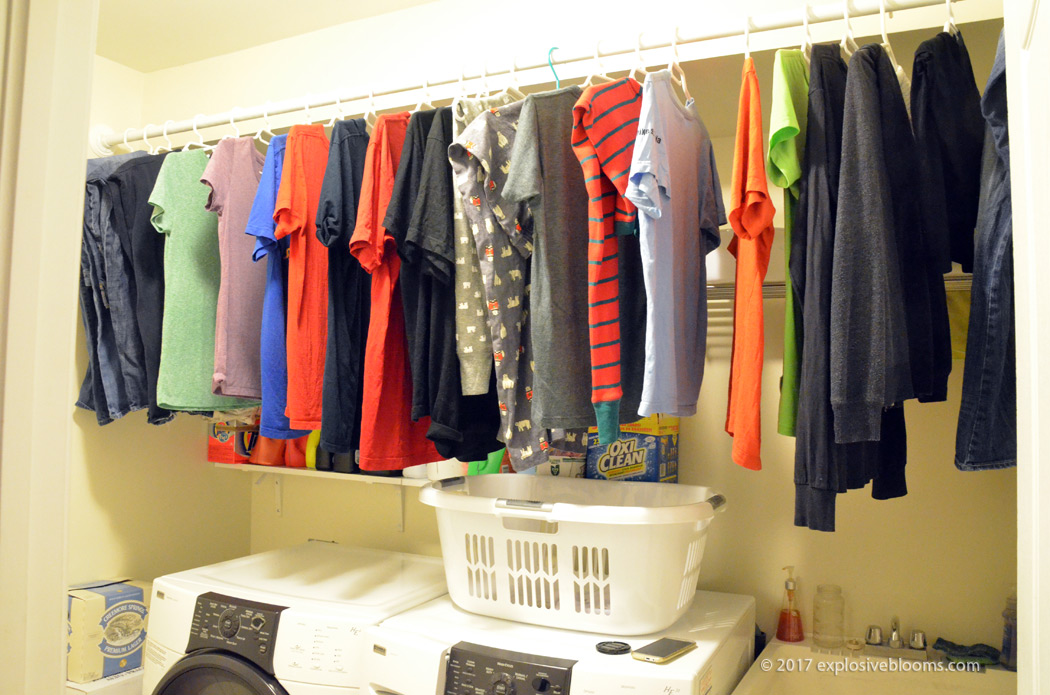