My potting table is disintegrating. I should have sanded and stained it again after a few years. I want to say that I originally purchased this table from Ikea. This was back in 2009, so my memory is a little fuzzy. I do remember standing in the garage, staining all the pieces before assembling the table. The staining only happened once, and the table has been left out on the deck year-round, with no protection for the last eight years. There is no way I could bring the table in every winter as I don’t have the space for it. But maybe I should have covered it with a tarp. Live and learn. Given that information about how it has braved all types of weather, it is impressive that it has lasted this long. It might still have one more season left, but the bottom of one or two of the legs are starting to rot. My heart actually aches a little, partly because I regret not taking better care of it, and mostly because I know it’s time to part with it. The table is really well constructed, and most importantly it’s the perfect size, as if Ikea designed this table just for me. Unfortunately, Ikea doesn’t sell anything like it anymore.

I’ve asked hubs if we could use it in the garage, but there is no space for it. Yes, I’m having troubles giving it up.

I’ve gathered some photos of my potting table from over the years, as a kind memory before I say good-bye. This trip down memory lane also makes me smile as I peruse through photos of how my garden has developed over the years. Let’s start at the very beginning – 2009. All my plants are in small pots that year, and nothing is grown from seed. Look at how fantastic the table looks! 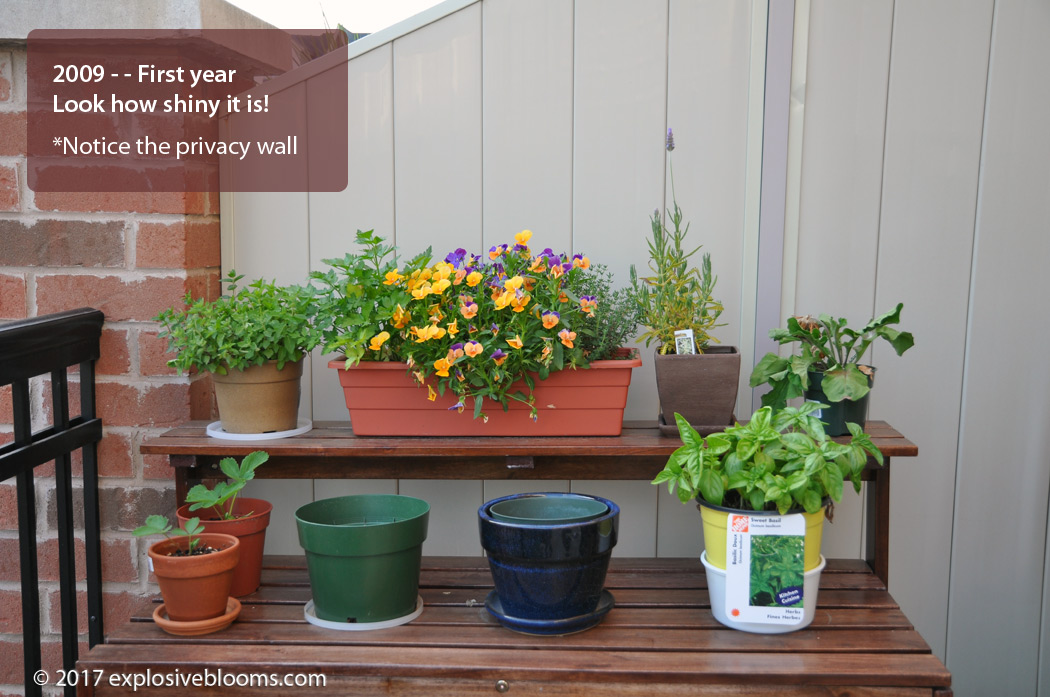 The table wasn’t a focus point. It’s one of those things that you use extensively, but it takes a backseat to the plants. Notice the placement of the table – that’s where it has sat, unmoved. In this photo below, I can laugh now at how I grew 4-5 cherry tomato plants in the small 5-gallon barrel. Rookie. I will have to do a photo post on how my garden has changed over the years. 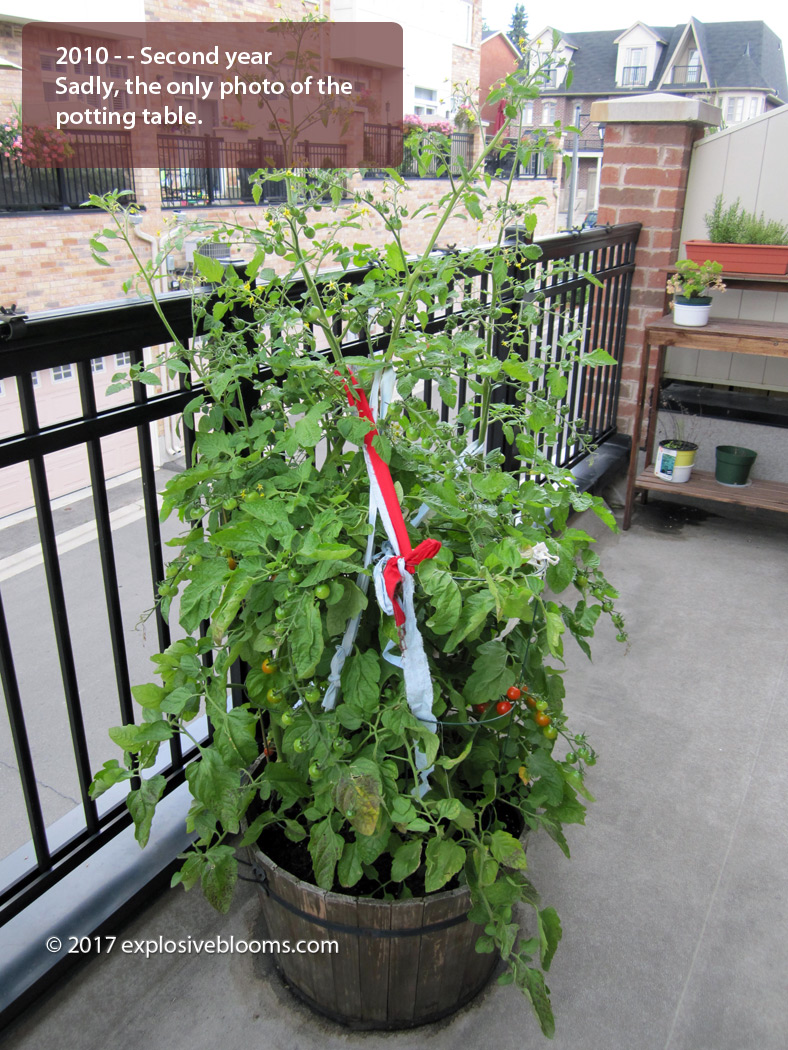 By the table’s third year, it is starting to show some wear, but not too much. Still looking great! Notice the plants are still small, potted plants. But in this year, I did learn not to cram so many tomato plants into one container. I ended up with three barrels, with one plant in each. 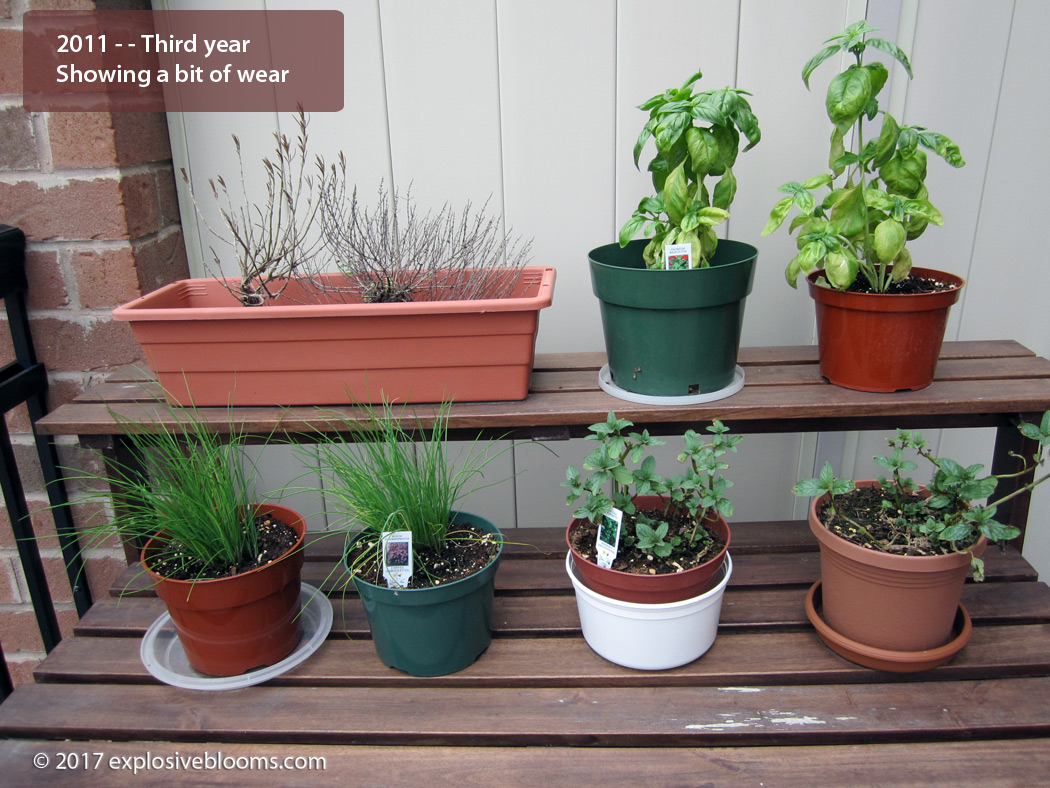 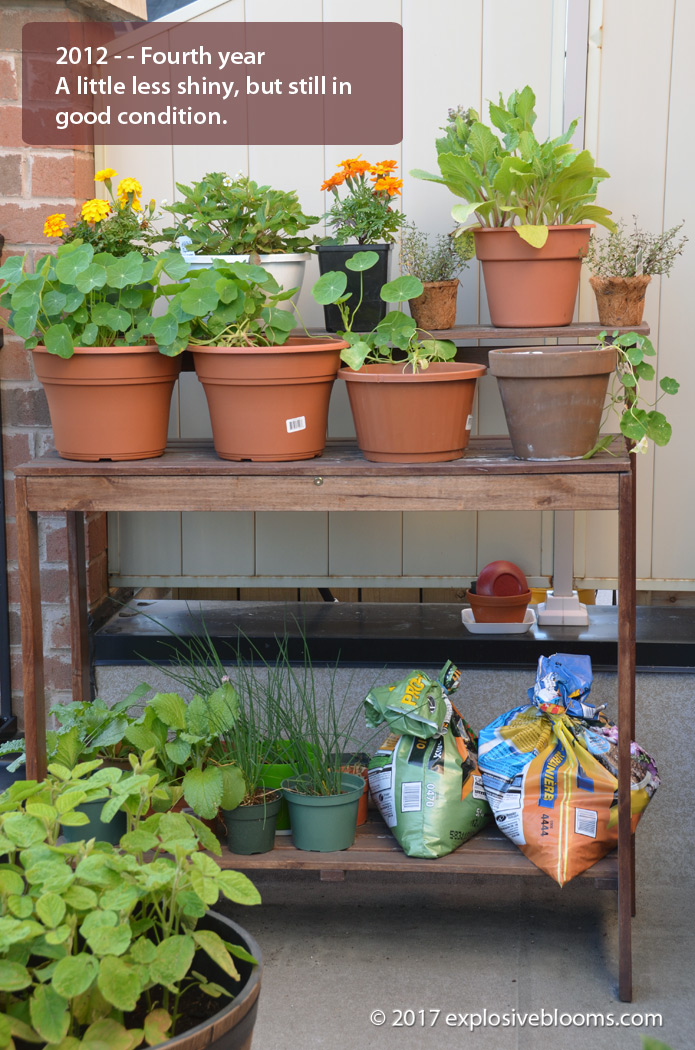 I probably should have sanded and stained the table in 2013. As you can see, the stain is starting to wear, and in the photo below, I can see the right corner of the table starting to lift. (I’m sorry, table!). It looks like 2013 is the year I decided to start growing things from seed. 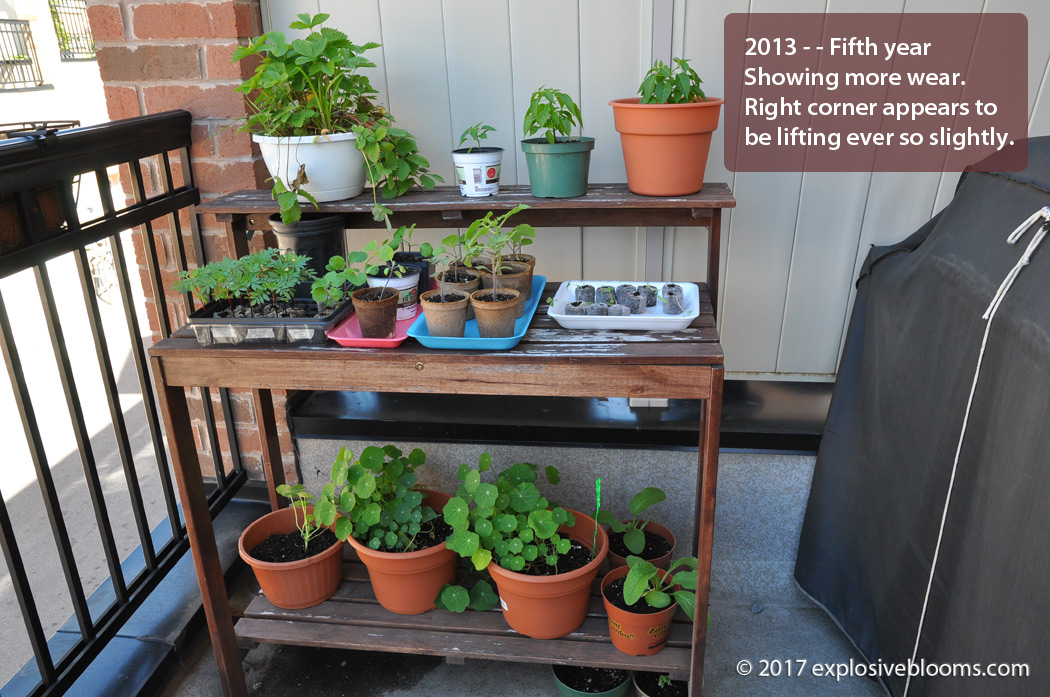 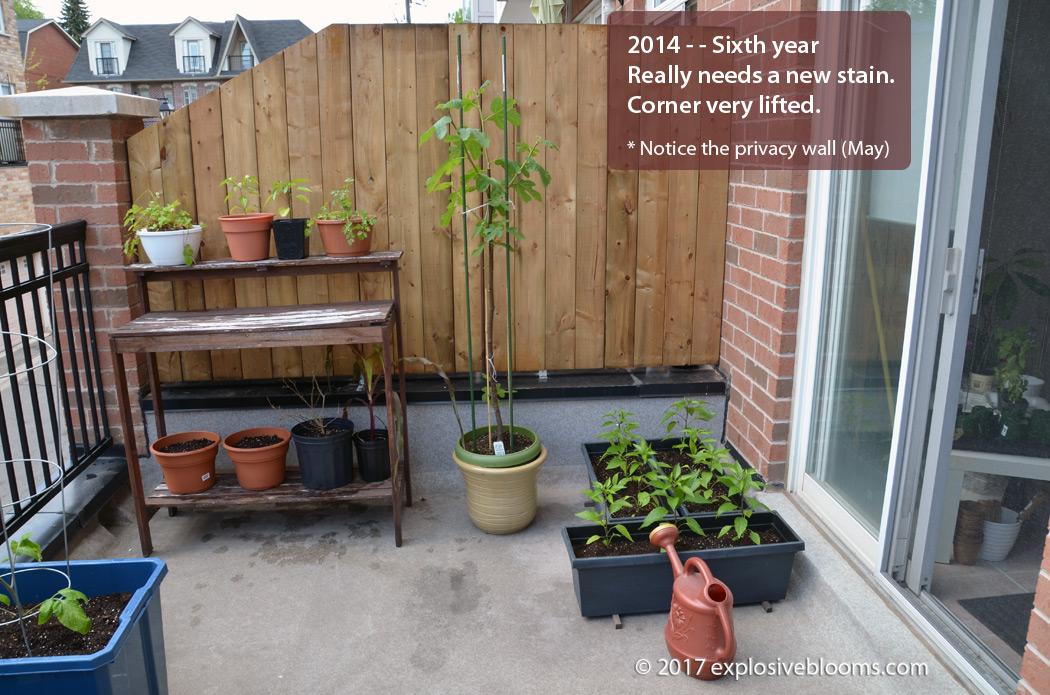 Compare 2014 to 2010 – the year of the four plants in one barrel to this! And it doesn’t stop here. My current garden now has five of the blue bins instead of three. And yes, that’s a massive stalk of corn growing in a container. 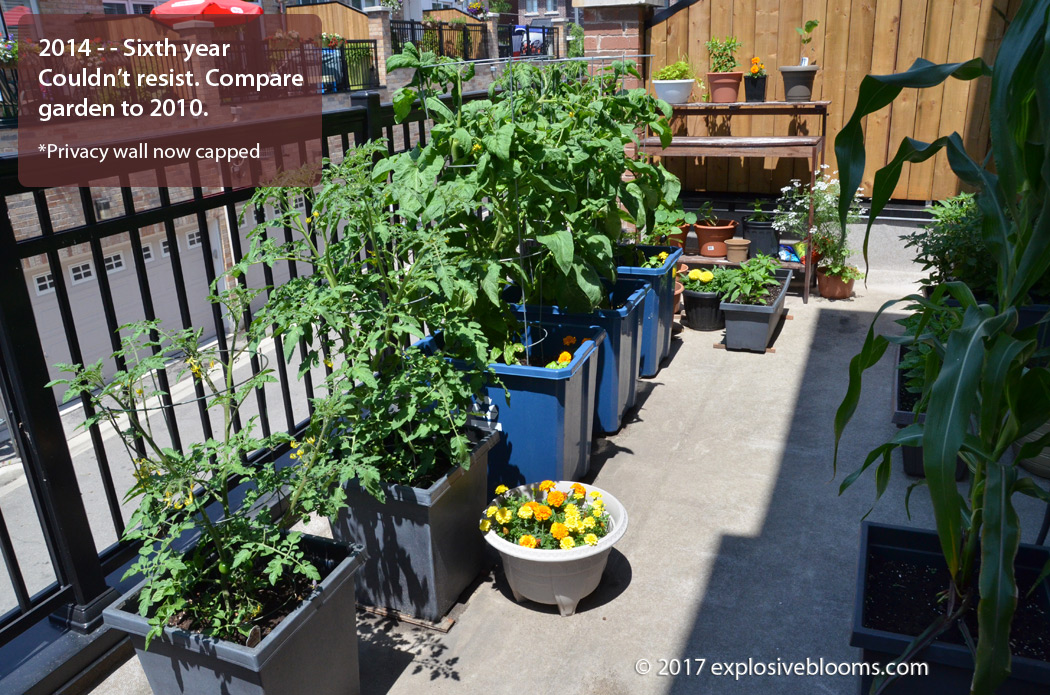 The potting table gets a lot of use starting in April/May every year. That’s the time I’m usually transplanting my seedlings from the jiffy pucks into 4-inch pots. 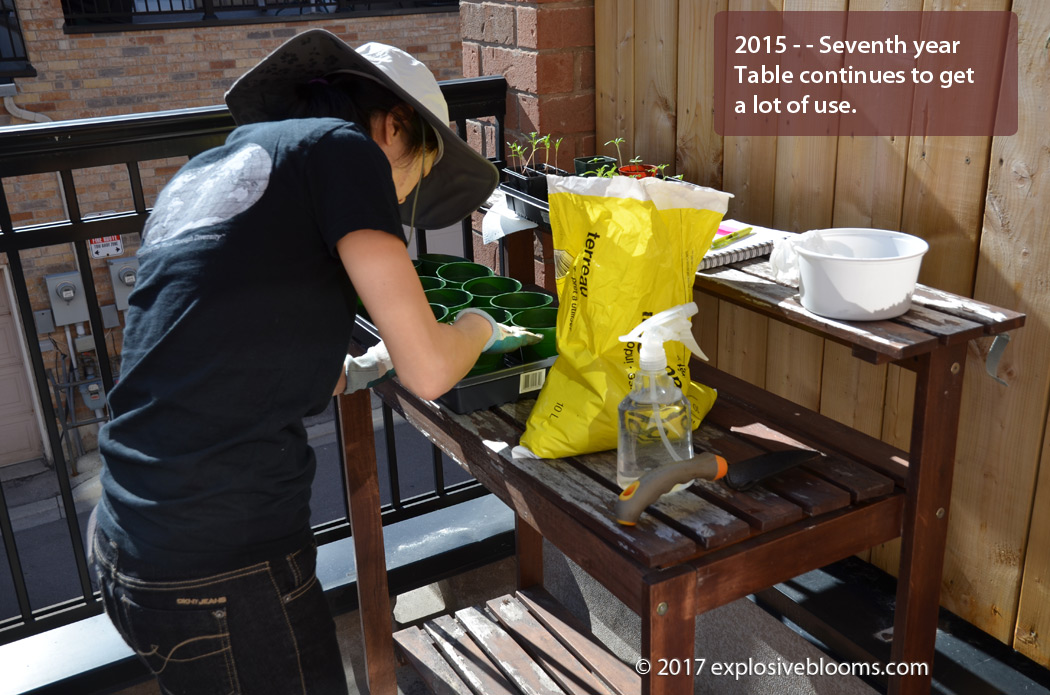 Last year was when I really took notice of the bottoms of the legs of the table. And you can really notice the lift on the right side of the table. This photo was taken in late April 2016. Those are all the tomatoes and peppers I started indoors from seed. Those dead looking plants on the bottom shelf are strawberry plants. They sit in my garage over winter, and very surprisingly, they come back on their own. 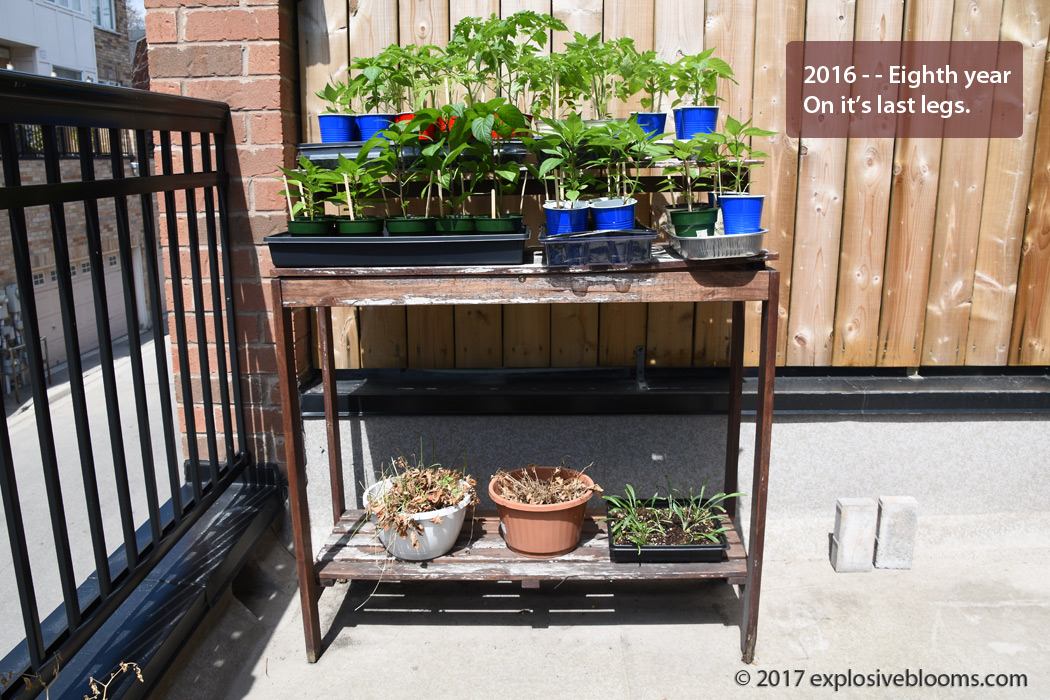 My beloved table has seen better days, but I still love it. To me, it still sand proudly, always ready for me and the new batch of plants. I’m gonna miss you, old friend. Thank you for all the years of service! 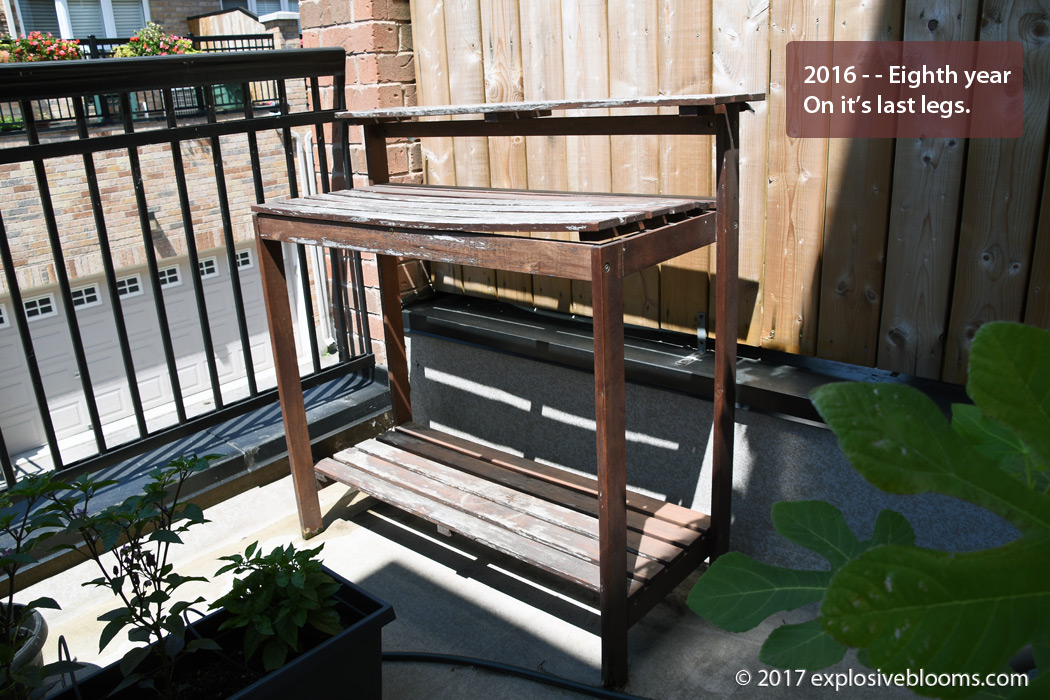 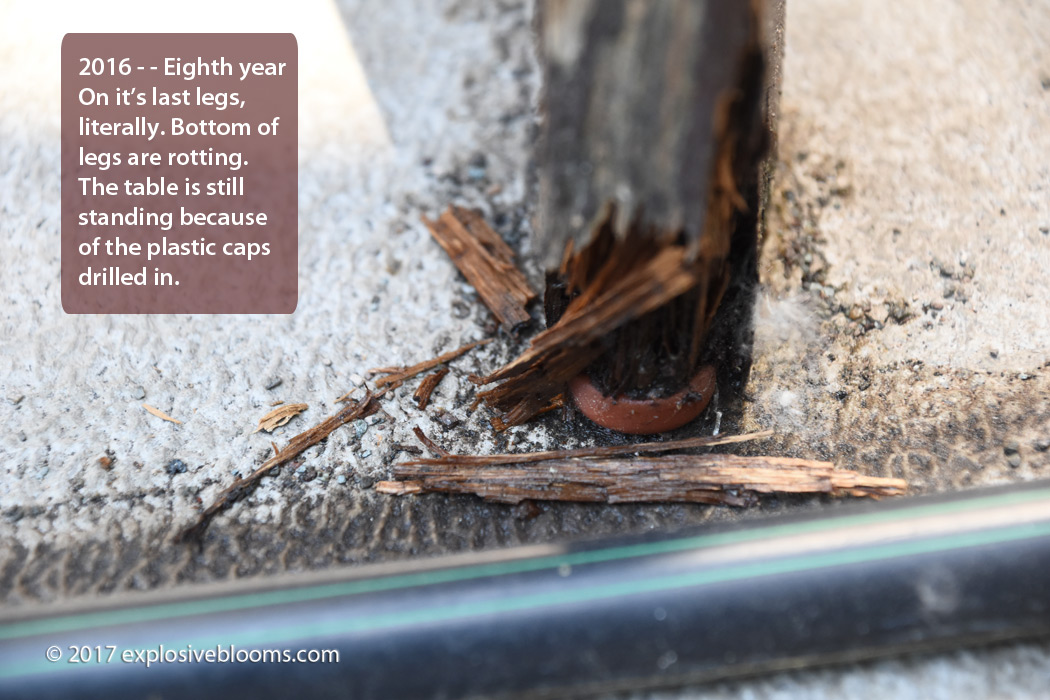 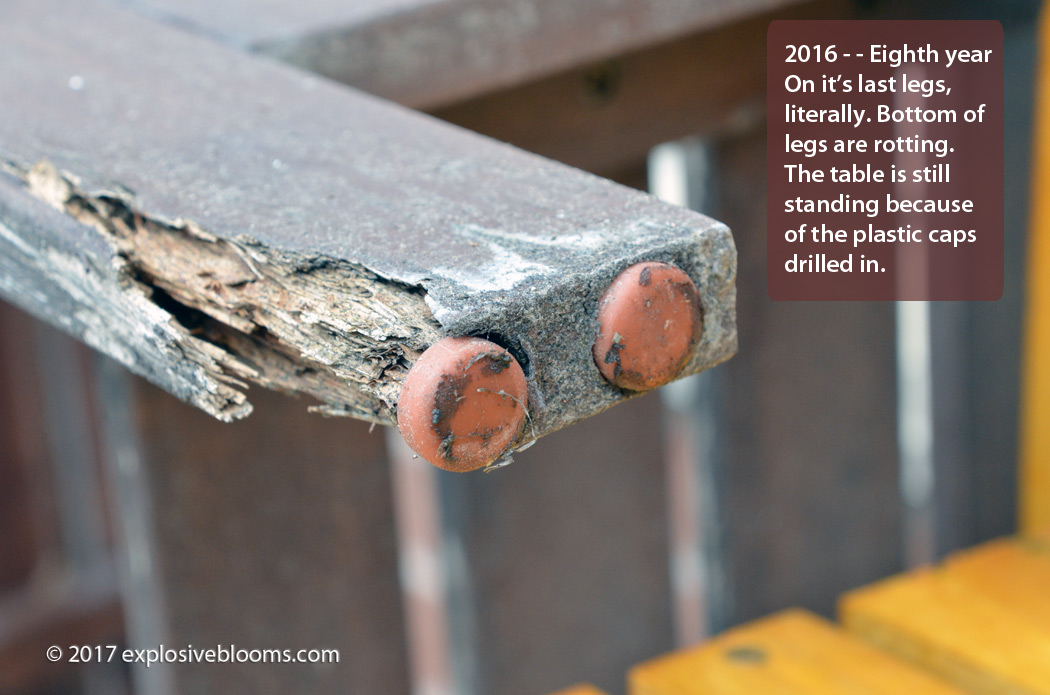 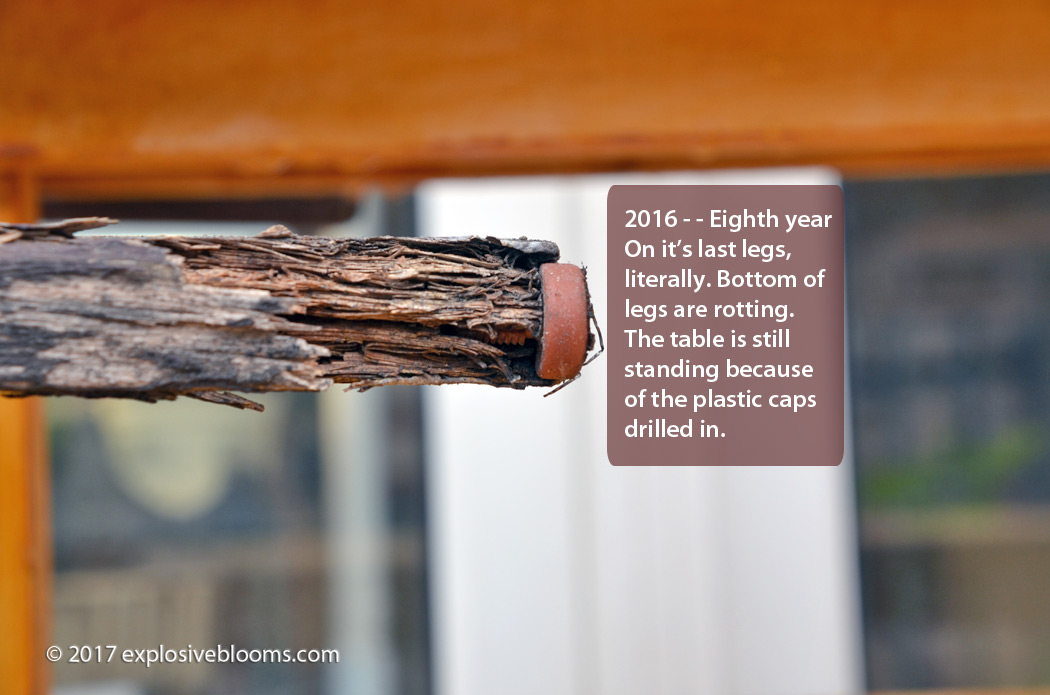 I mentioned the state of my table to my Dad last year after the growing season, and he asked me to send him some photos and dimensions. His response? “I’ll give it a shot. It does not seem that complicated.” My Dad is a handy guy, great at woodworking. As a child, he used to build us wooden toys. He still has the tools, and given that this wasn’t a difficult project for him, I feel like he enjoyed building it (instead of it being a chore). And for me, I love it! My Dad brought it over this afternoon, and it’s perfect. He upgraded it for me by making the top shelf a little deeper than my original. He used cedar, which should last a long time. He stained it, and it’s a cheerful colour. It stands out even as the sun goes down, like a warm glow. 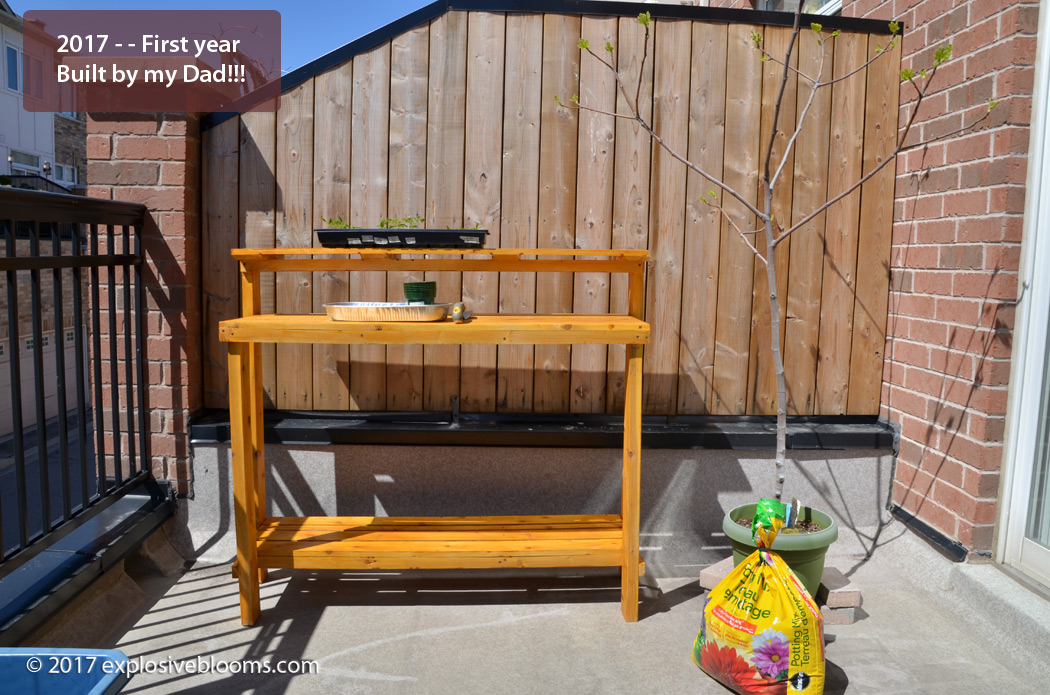 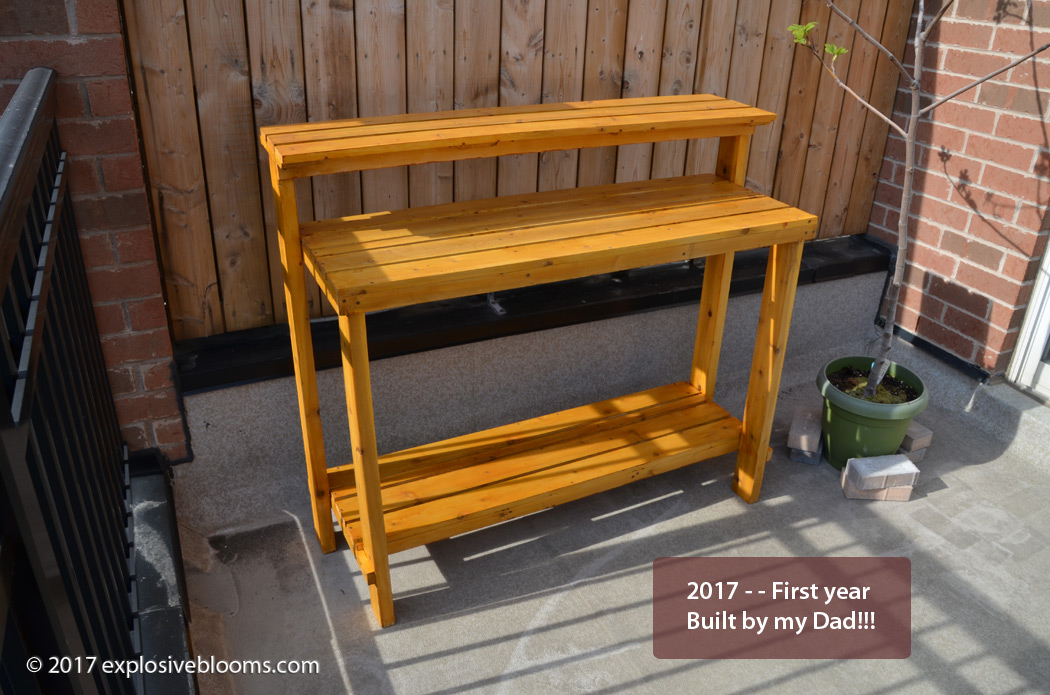 My plan is to raise it off the ground a little, with some tiles, and for the first time in eight years, I’m going to relocate the potting table. I’m going to place it closer to the house, on the other side of the deck where it will be covered by the overhang. This way, it will be protected from the rain, and as the deck slopes away from the house, the feet of the table should not get wet. This spot also doesn’t get the hot sun all day, which is another protective measure for the table. I’ll also cover it in the winter with a tarp. I look forward to many years with this amazing table. It looks like there will be an altered garden design this year! I’m sure my peppers will love the new corner. Peppers love hot weather.

Many thanks, Dad! One of my friends even suggested that you turn this into a business – I agree! Every serious gardener needs a well-crafted, functional potting table.