The Victoria Day long weekend signifies the beginning of the outdoor gardening season. Leading up to this weekend was heavy winds and rain. My hardening off period felt rushed, but luckily we had some unseasonably hot, summer-like weather with overcast skies. This was a good thing. I started my hardening off on May 9th, and it was with the tomatoes and the first tray of peppers. I started them with a couple hours from 2:45 pm. In the early days of this process, the seedlings showed signs of distress easily (wilting). The new location of the potting tables is less sunny than the old spot. Every day, if it wasn’t raining, I’d let them out and leave them out for a little longer. On May 15th, it was hot, so I put them out first thing in the morning, on the bottom shelf of the potting tables where they would have some cover from the afternoon sun. When I got home, I was thrilled to see that they were not limp. But this was also the week of high winds and rain. I had to bring in my tomato seedlings because they have grown tall and the winds were knocking them over. Mid-week, hubs brought in all the peppers for fear of them blowing away. I was also seriously worried about my fig trees snapping in half. Big Fig was whipping around, and eventually toppled over. One of my other smaller fig trees (named Marta), was also blown over. 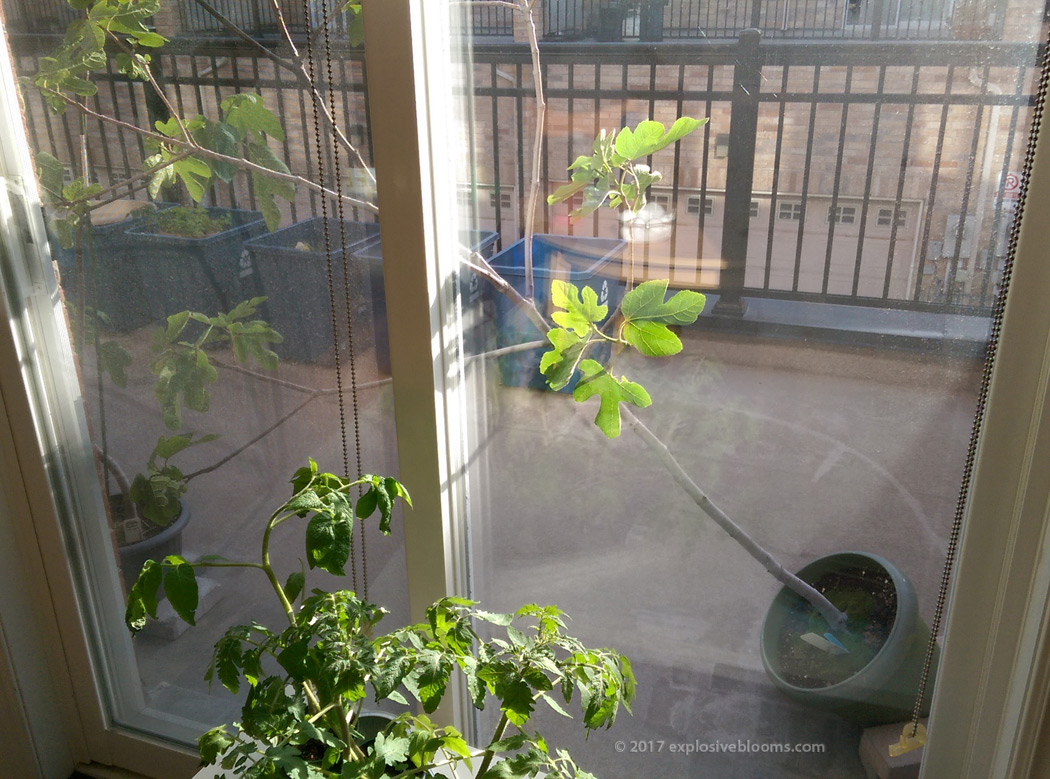 My seedlings only started spending nights outdoors a few days ago. This is the first year that it feels like the seedlings did not need so much babying. Perhaps this is because I started seeding later? And possibly the two freakishly warm days last week? I didn’t even use the greenhouse I prepared, and the second grow light was only in operation for maybe one week.

For some reason, I was under the impression that I didn’t seed very much this year. I had mentioned to my friend that I felt my garden was going to be quite bare this year. 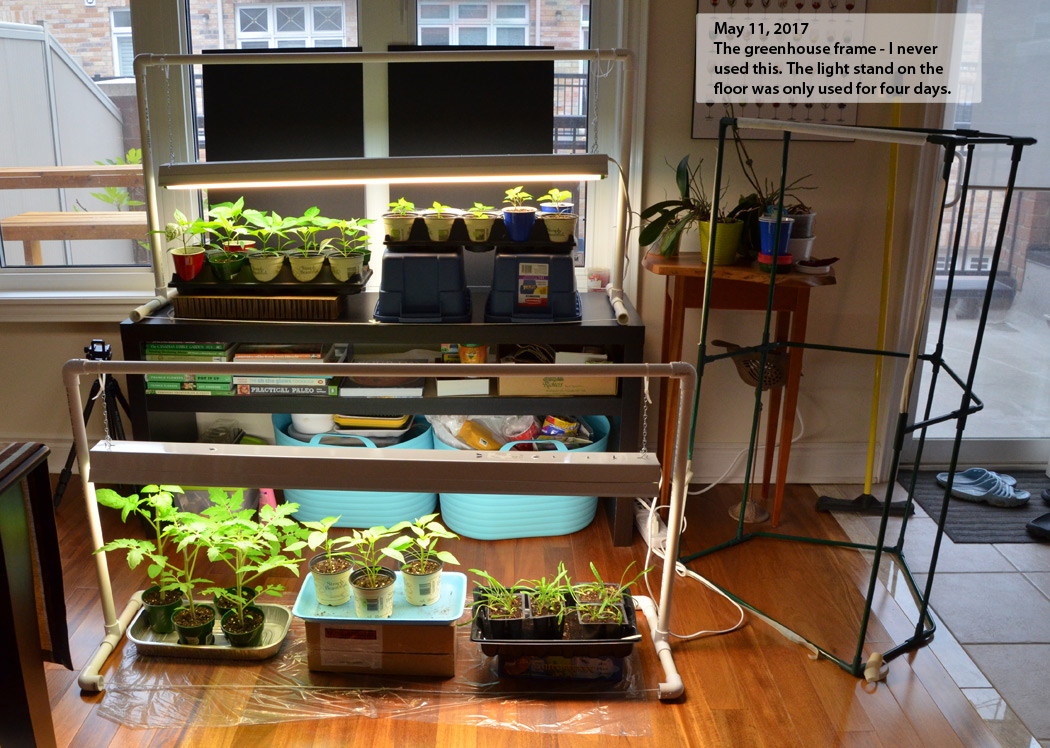 Compared to this, you can understand why I felt like I didn’t grow much this year. 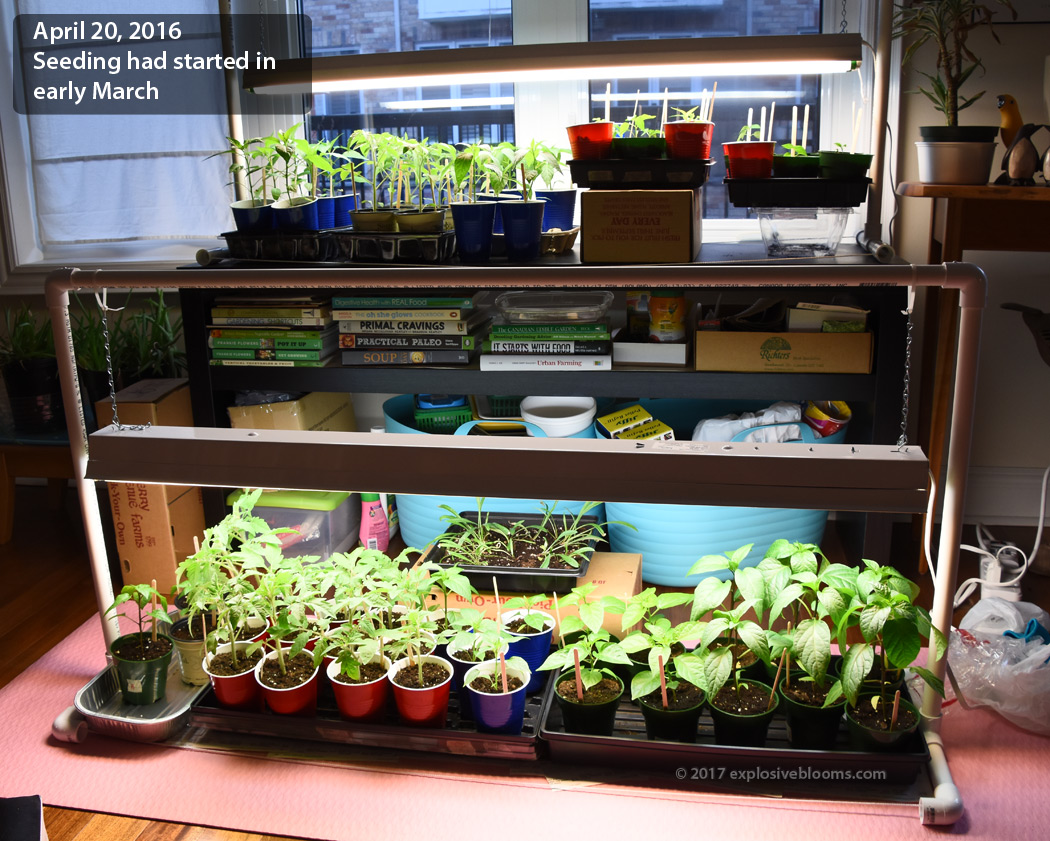 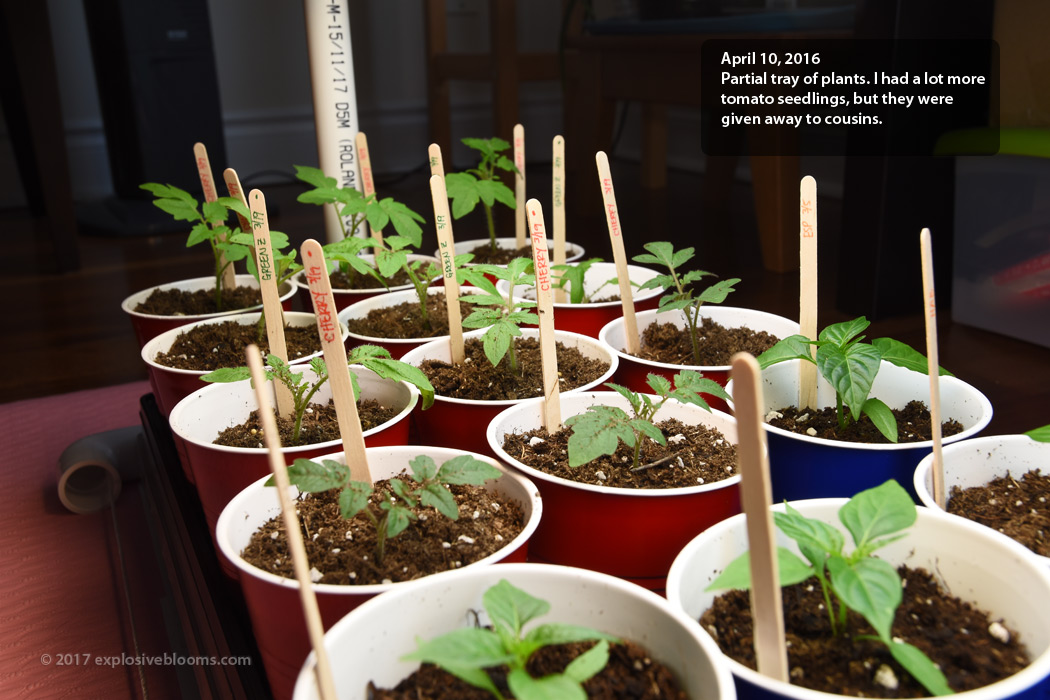 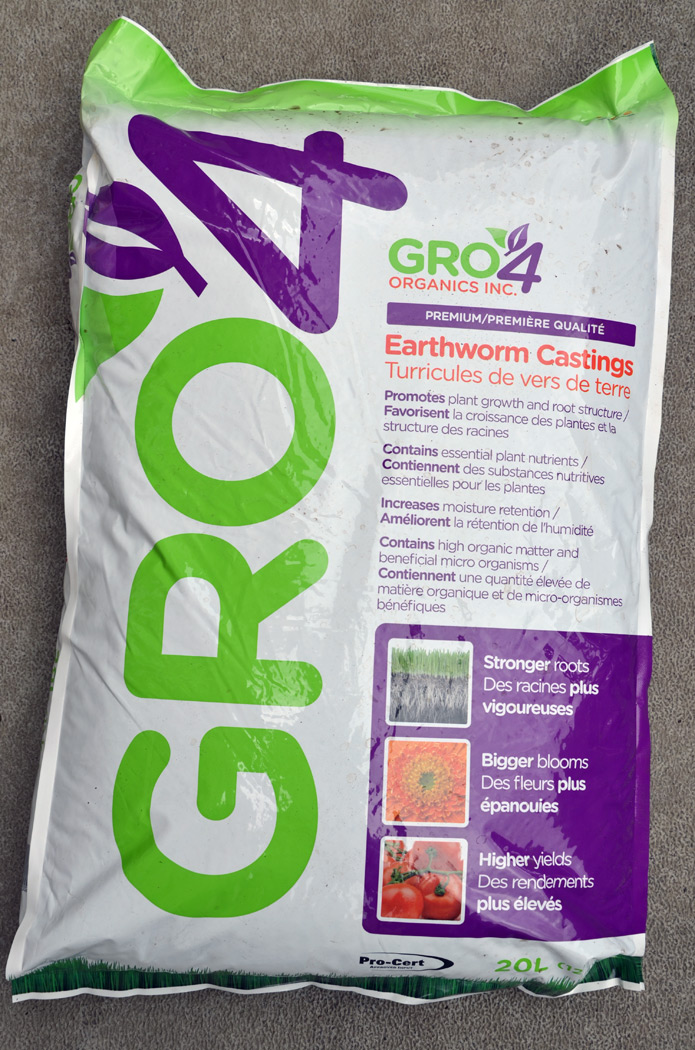 Today was the big planting day. I started as soon as I woke up. I decided to fill my pepper boxes with the soil from the tomato planters and adding some of the worm castings. I managed to fill seven pepper planters, plus the pak choi planter and the kale planter, but I ended up having to return to Plant World today (thankfully they were open) and I purchased one more 60.5L bag of potting soil ($16.99), and an additional 20L bag of worm castings (still on sale $9.99). I needed the extra potting soil to top up the tomato containers, pot up three of the figs, plant my gazanias, and to plant the additional herbs I purchased (English thyme, lemon thyme, sweet basil, and Italian basil).

As I started transplanting all the peppers, I realized that my garden isn’t going to be bare. In fact, I may have more than last year! I think what threw me off was that last year I grew a lot, but a lot of my seedlings went to my cousins. 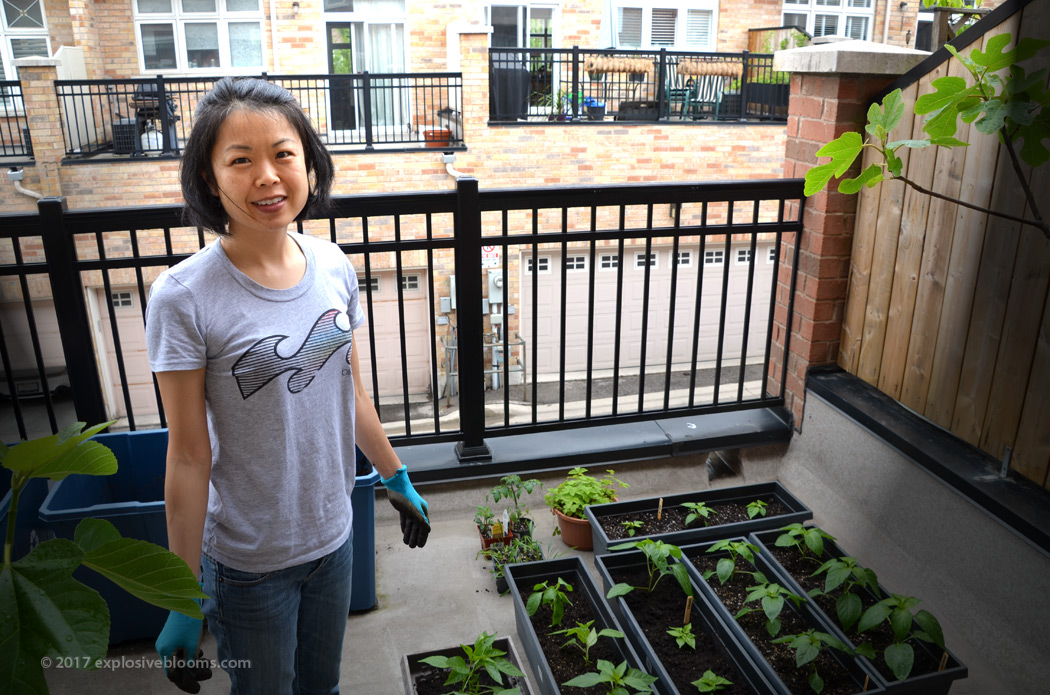 This year I decided to try new varieties of peppers, and not just hot peppers. 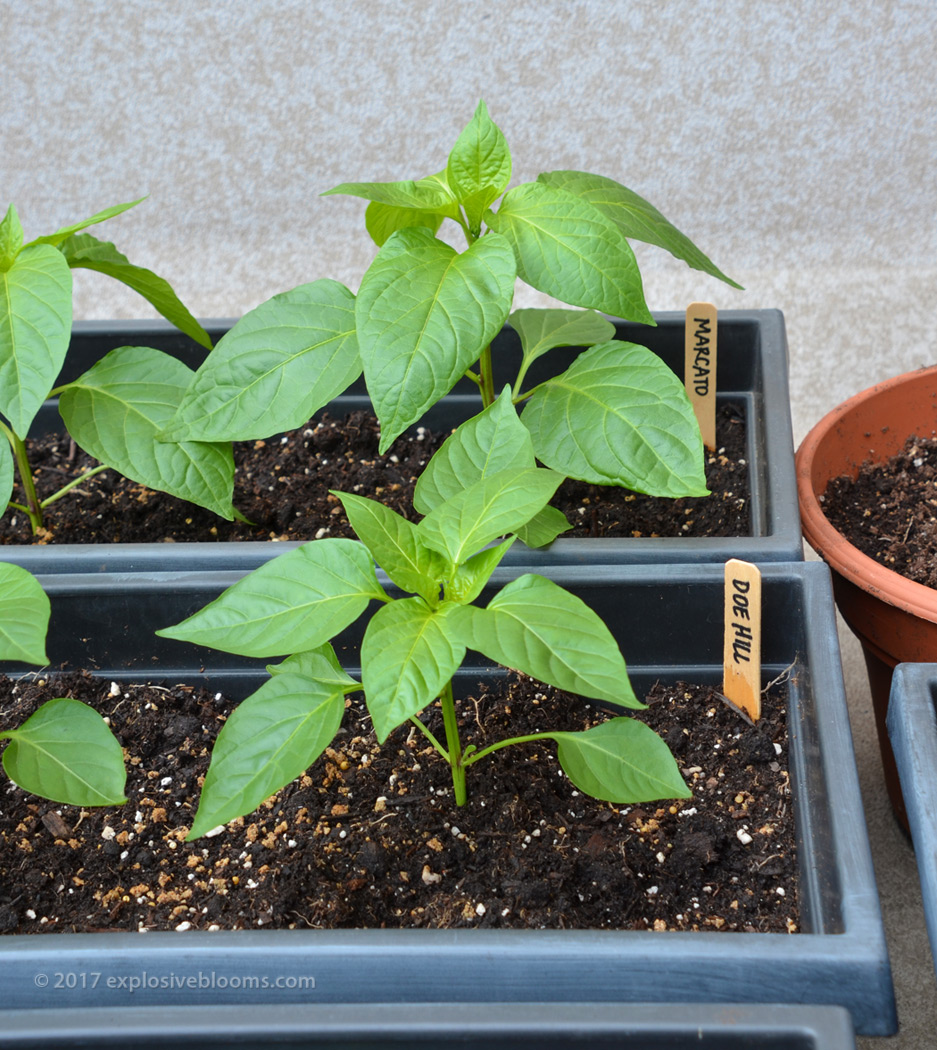 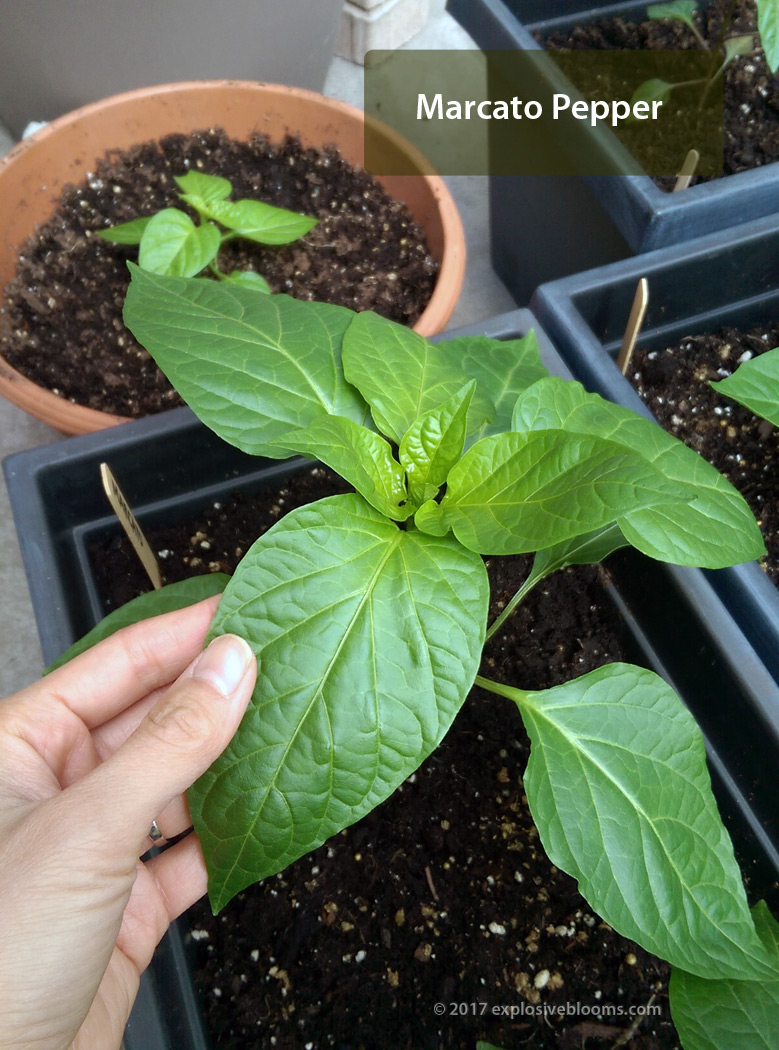 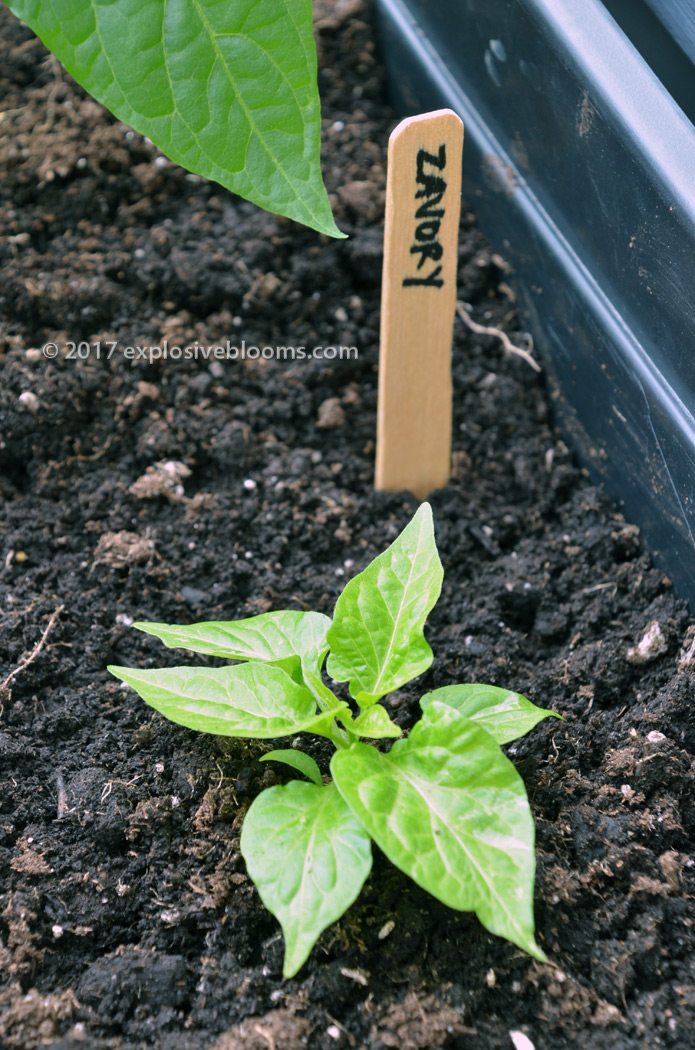 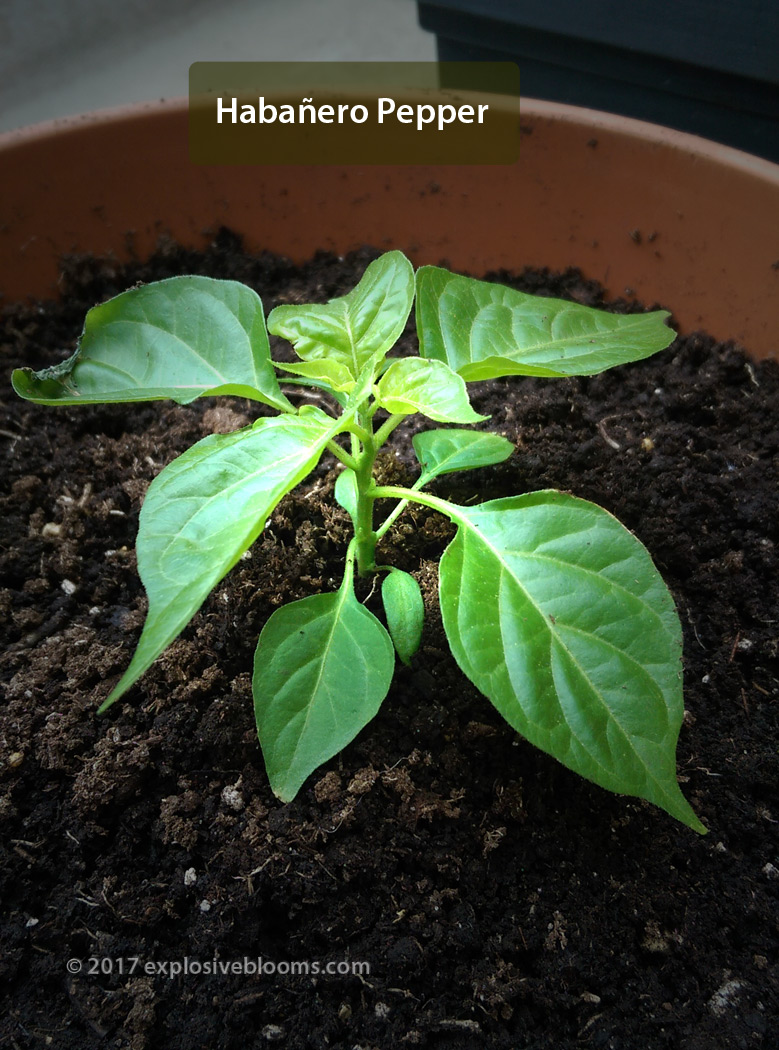 This is what my pepper patch looks like this year. The smaller plants are the chili peppers. As I started them a month later than last year, I’m wondering what my yield will look like. Chili peppers require a long growing season. I’m super excited about the Marcato peppers, a sweet Italian pepper. Last year we did not get to enjoy any Shishito peppers, so I may have over-compensated. I have six plants. They are highly productive, and Shishito peppers are not good freezing peppers. They are meant to be consumed immediately and taste best quick fried. I know my neighbour really enjoys them (she was harvesting them while we were away for seven weeks last year), so I will likely be sharing the harvest with her this year. Habaneros are for hubs – they are the ones in the single pots. I usually grow them in single pots as they have always taken the longest to ripen, and the plants end up in my garage into late October. 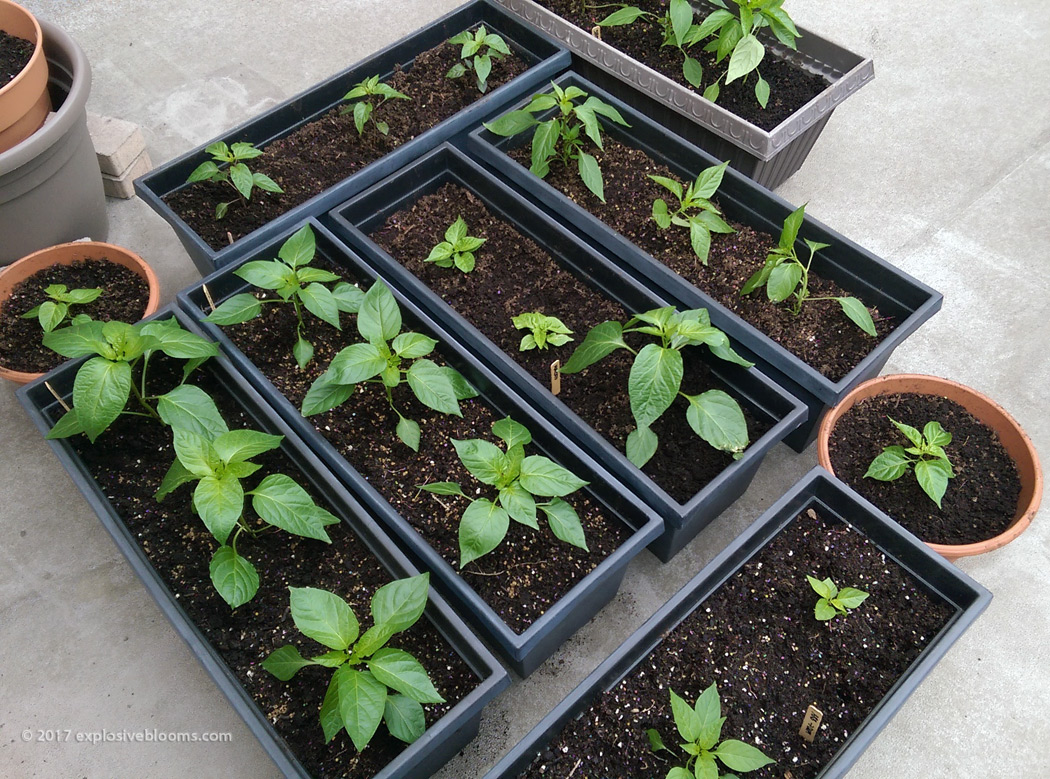 My tomato seedlings have grown quite tall, and it’s only been about a month-and-a-week since they germinated. I seeded Green Zebra again, and Marianna’s Peace. I had an extra Green Zebra, which I gifted to a friend. These plants are much taller compared to the two cherry tomato plants I purchased at Plant World. I picked up a Sweet 100 (the original – the first tomato plant I ever grew), and a Rapunzel (supposedly each vine holds 40 cherry tomatoes). I snagged the last Rapunzel plant, and it might be a runt. I’ll see what I can do to help it along. It’s the second from the far end in the photo below – tiny. 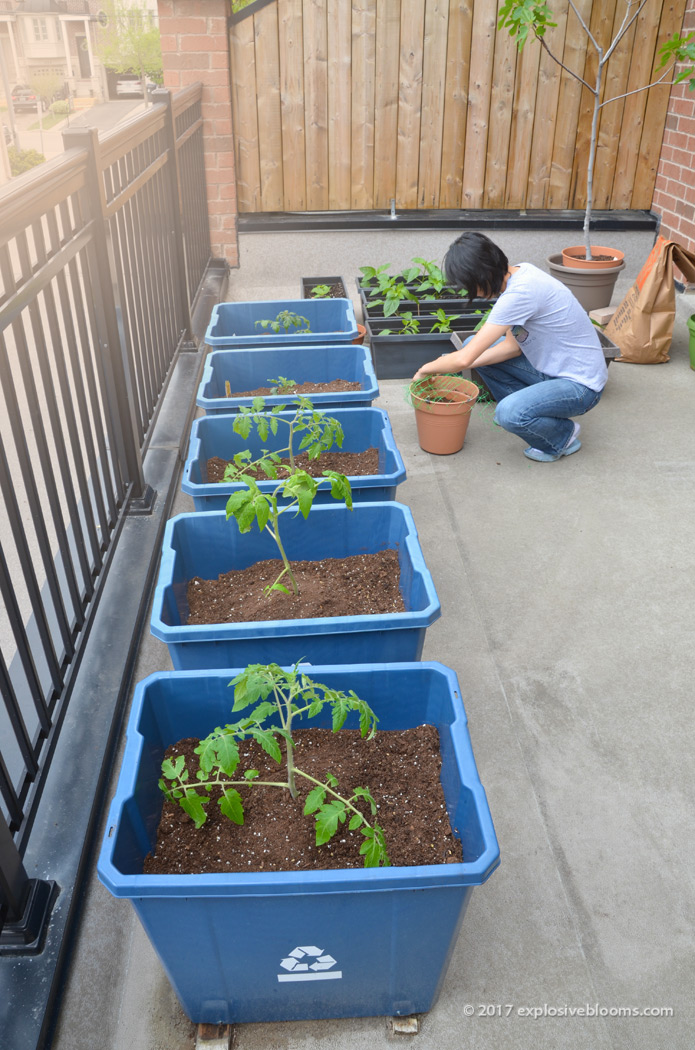 In the photo above, you’ll notice I am attaching some plastic trellis netting to a pot. I just seeded Patio Star Zucchini (West Coast Seeds) and I don’t want the squirrels digging out the seed. I had to do this with my pak choi because the day after I had seeded, I noticed something had been digging. 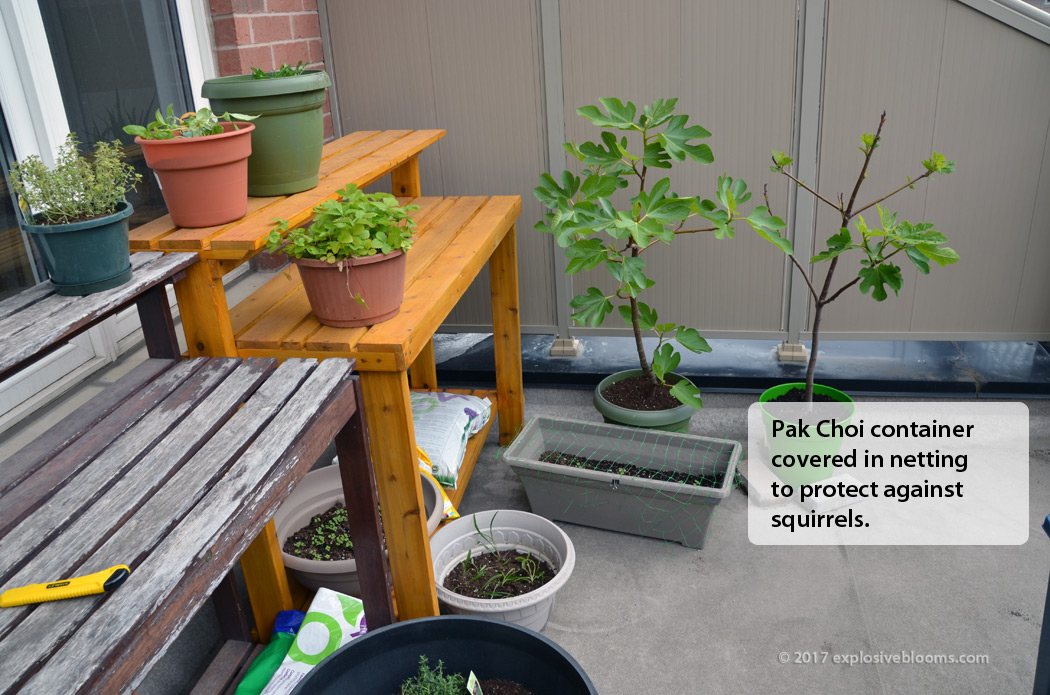 Also, as per Steven Bigg‘s suggestion about potting up my figs, I did that today. He had said that my trees were a nice shape that if they were his trees, he’d pot them up and that this was a good time to do it. Bigg’s is a fig expert, so I trust his advice. Today I potted up Big Fig, EJ, and Marta. I need to purchase a larger pot for Desert King. He has shot up 5.5-inches already, and is taller than me! 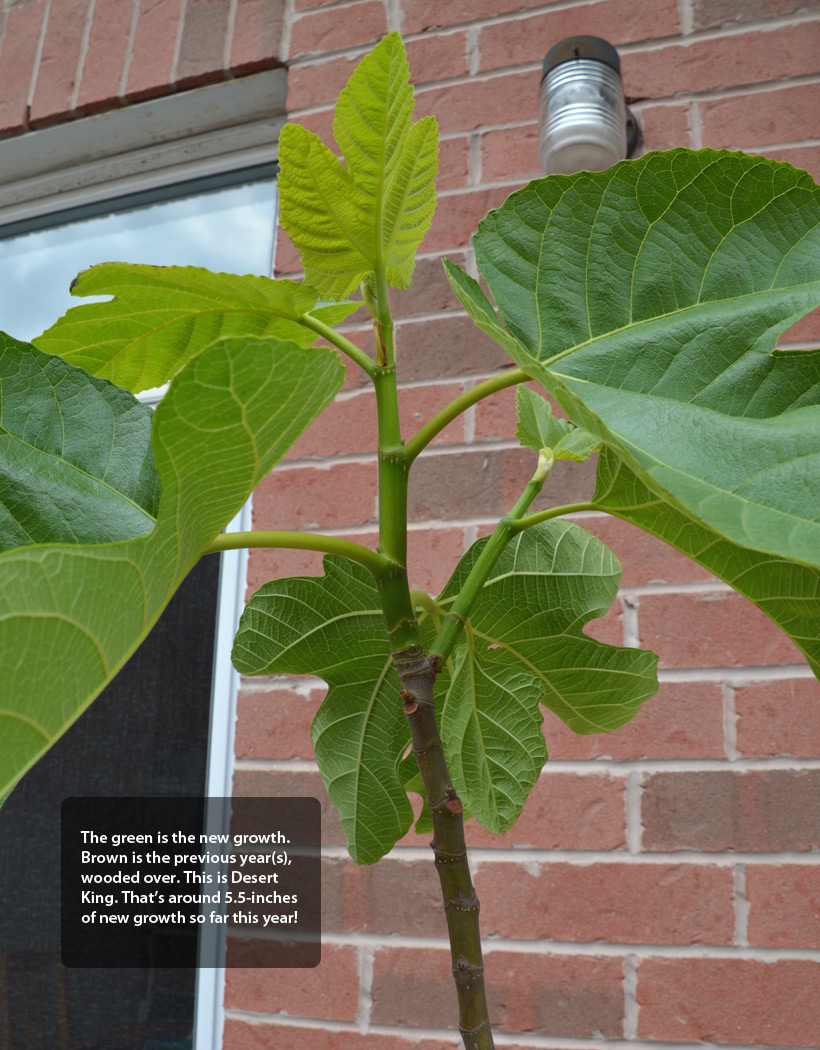 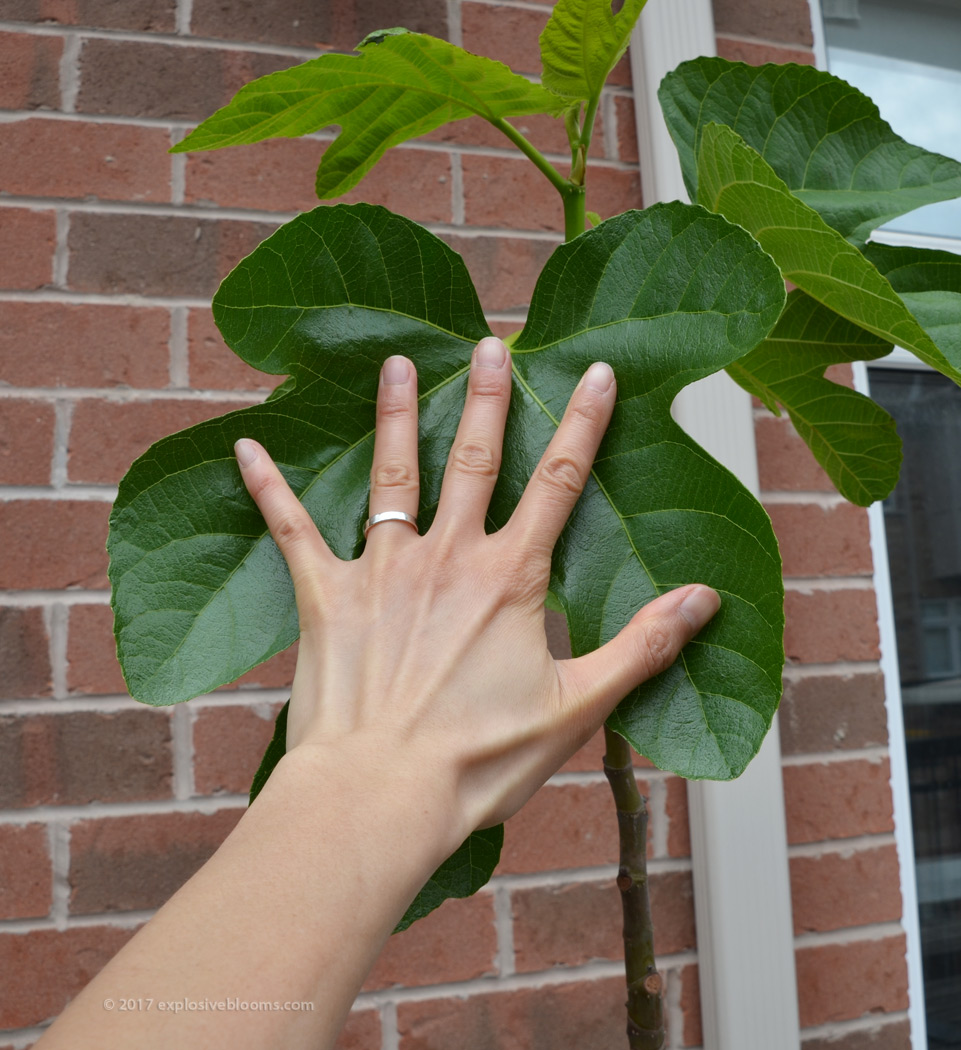 Big Fig went up to a 13-inch diameter pot. The pot it was in was possibly an 11.5 or 12-inch (?). This pot was passed on to Marta. I purchased an 11.5-inch pot for EJ today. Both EJ and Marta were in 10.5-inch pots. As you can see, EJ (on the right) is slowly continuing to come out of winter slumber. He’s progressing so slow this year, but better slow than dead. Hubs and I are both thinking the tips of the branches are dead, and we’re not sure why (maybe because we damaged roots when we repotted), but the good news is that this is forcing new branches to grow. With the potting up, I added some worm castings to the pots. I did notice that EJ’s roots did not grow significantly since last year, when we trimmed (hack-sawed) the roots and re-potted (into the same pot). We did this to all four fig trees as the root balls were very root-bound. 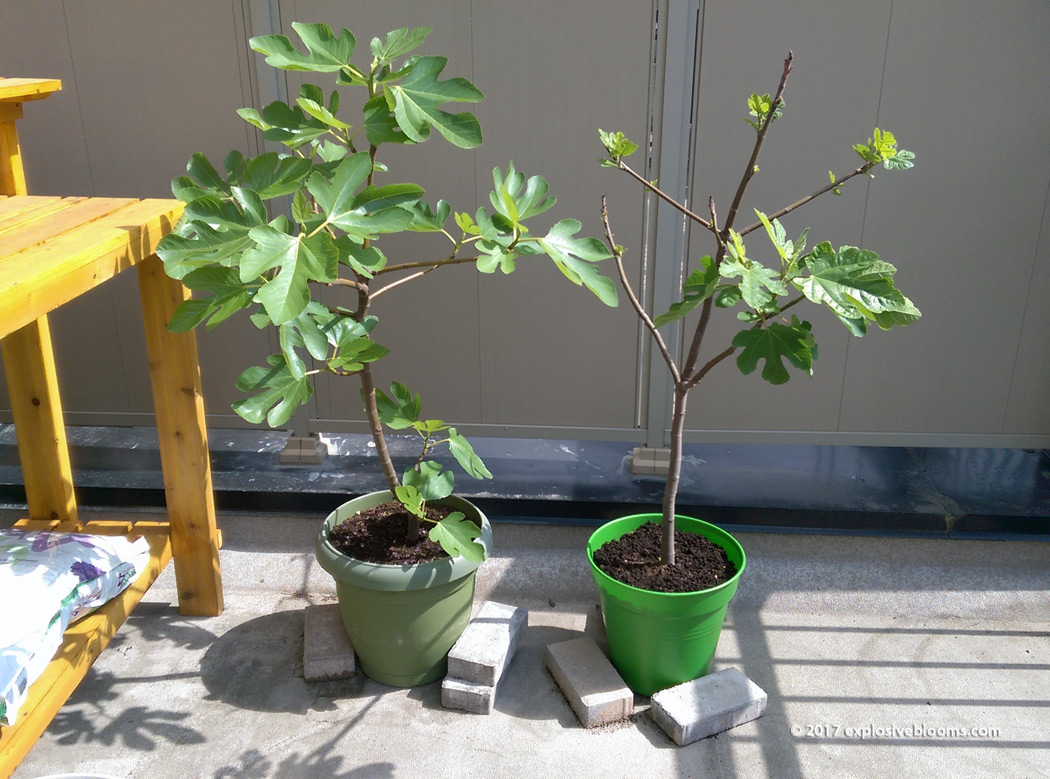 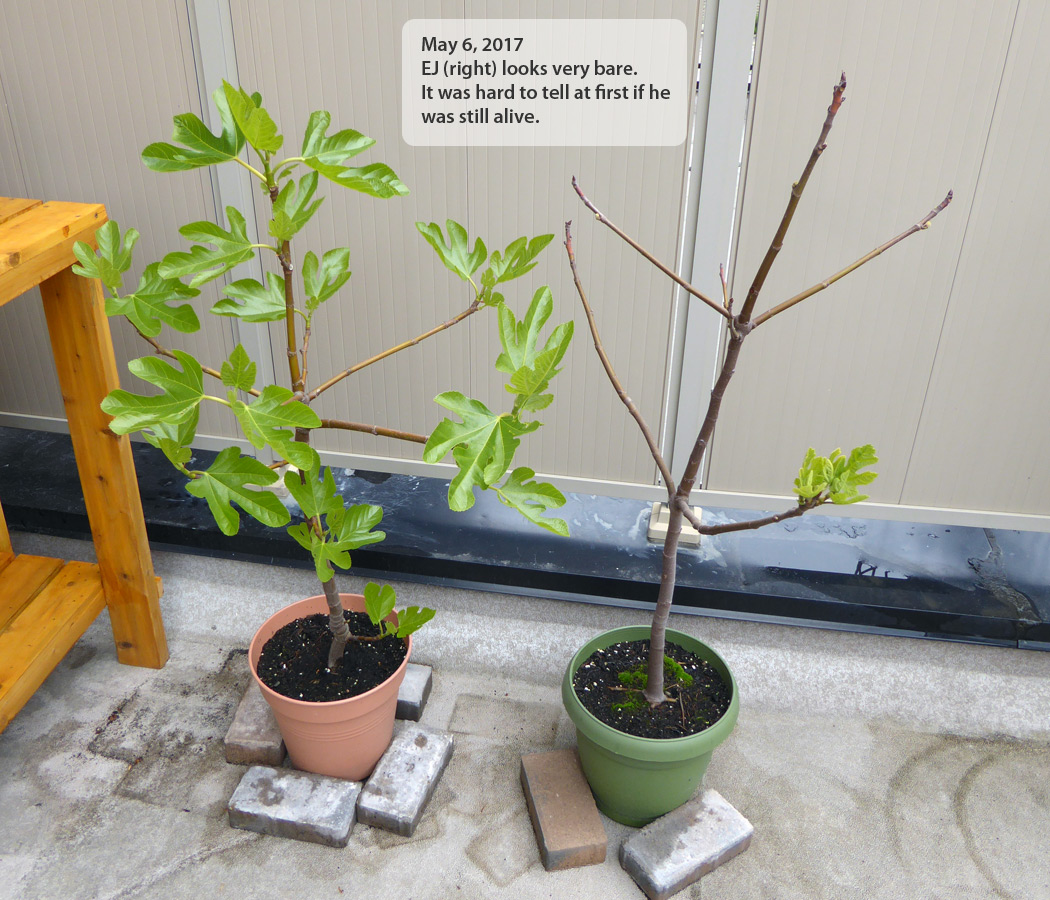 I am hesitant to pot up the figs because a bigger pot means a bigger plant. A bigger plant means a trickier time getting them through the house and back into the garage for the winter. Bigger plants also mean we need more space to store them. I have a feeling that Marta and EJ will not be able to sit on the same shelf in the garage this year. I also don’t think that Desert King will be able to sit on top of hubby’s car as it will likely be too tall. 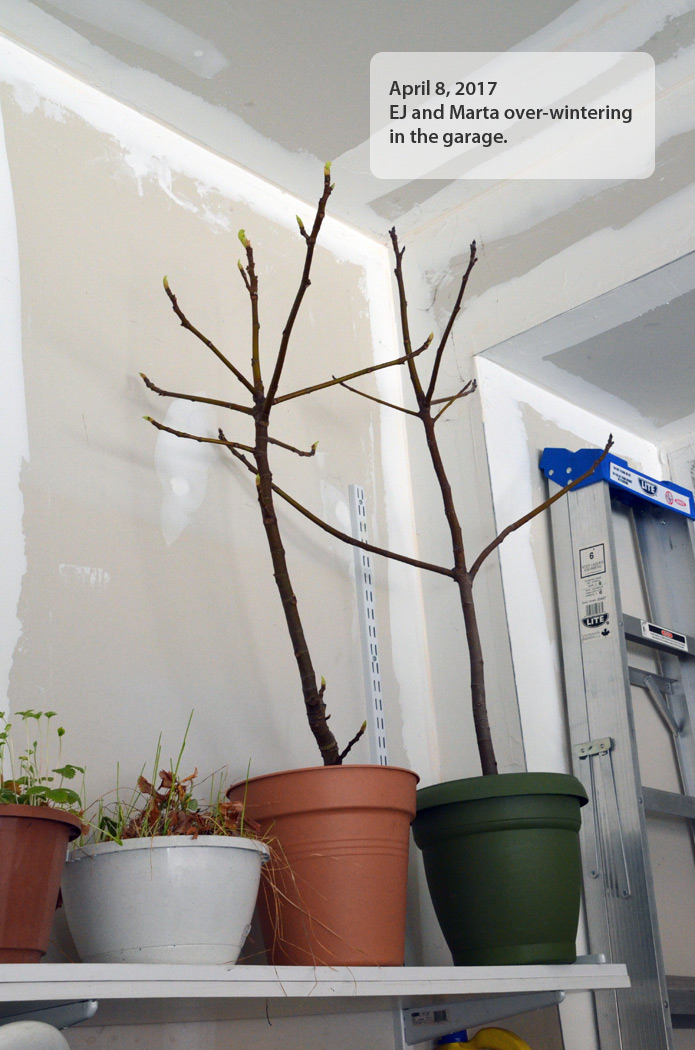