It’s almost mid-August, and the days are noticeably getting shorter. Yes, it’s kind of depressing. We’ve had some short stretches of hot days, but compared to last summer, it hasn’t been a hot summer. It’s definitely been a much wetter summer than last year. Combine this with me starting my seeding a month later than usual, and that makes for a concerned gardener. It’s been a mediocre summer for my peppers, especially my Shishito peppers. Hot peppers thrive in hot weather, so I’m not sure how or when the harvest will be for my chili peppers. The Marcato peppers are big, but they are still green. Not even a hint of colour change yet. 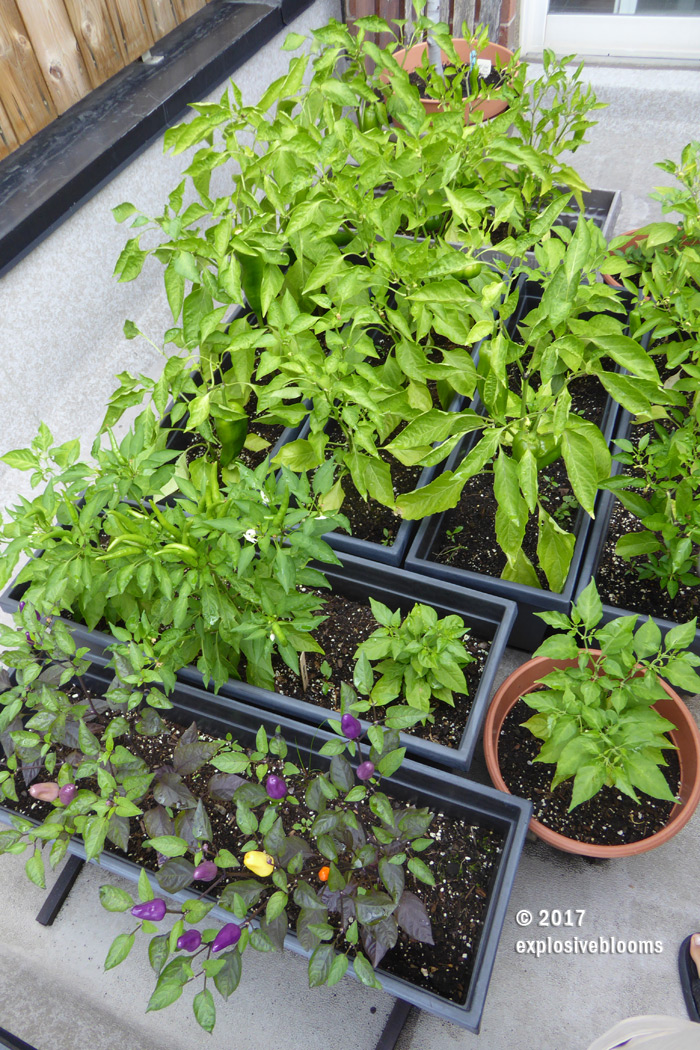 In the past, my shishitos have been super productive, but this year, there are few peppers, and new blooms look like they are damping off. It could be from the amount of rainfall we’ve had. I don’t even water my pepper patch very often because the soil hasn’t been drying out. I’m also wondering if this location on my deck isn’t as favourable, though technically the sun hits this spot earlier. My first harvest of shishitos was August 2, and it was a very small harvest. What has been surprising is that almost 100% of the peppers have had heat – this is good for hubs, not so good for me. So I will usually eat the bottom tips, and hubs eats the rest. Last summer, our neighbours got most of the harvest, so I don’t know what the heat level was like, but in the previous year, most of the peppers weren’t spicy. Colour change is not an indicator for heat level for this pepper. Although you can pick when green, the flavours are better as you let them ripen a little. We typically enjoy them when they are starting to turn as they lose some of the bitter (not quite ripe) taste. 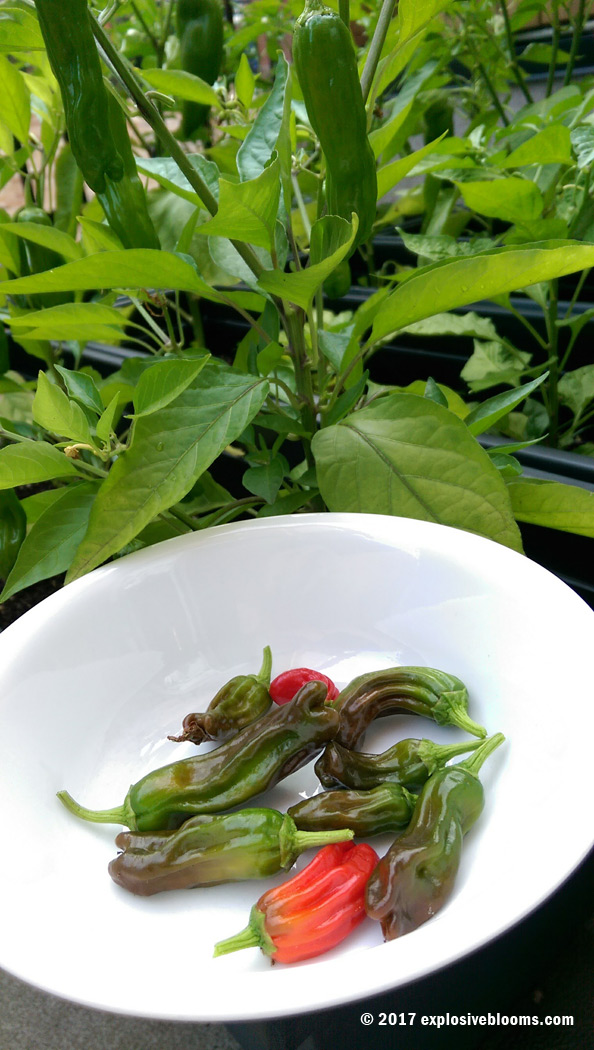 I’ve noticed that one of my marcato peppers, and one of the doe hill peppers have this identical spot, both facing the same direction. It’s been like this for a while, and the spot hasn’t grown, so I’ve left it for the time being. The spot is not soft. It’s more like a skin blister. These peppers are still growing bigger, but haven’t begun to ripen. Marcatos will turn red, and doe hill will turn orange when ready. 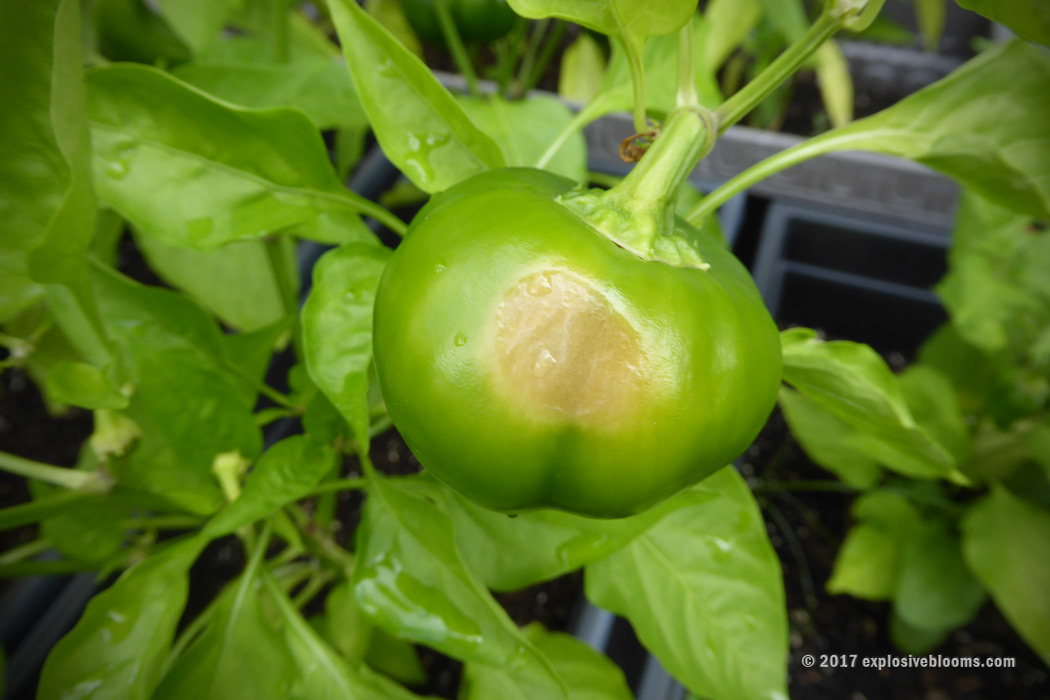 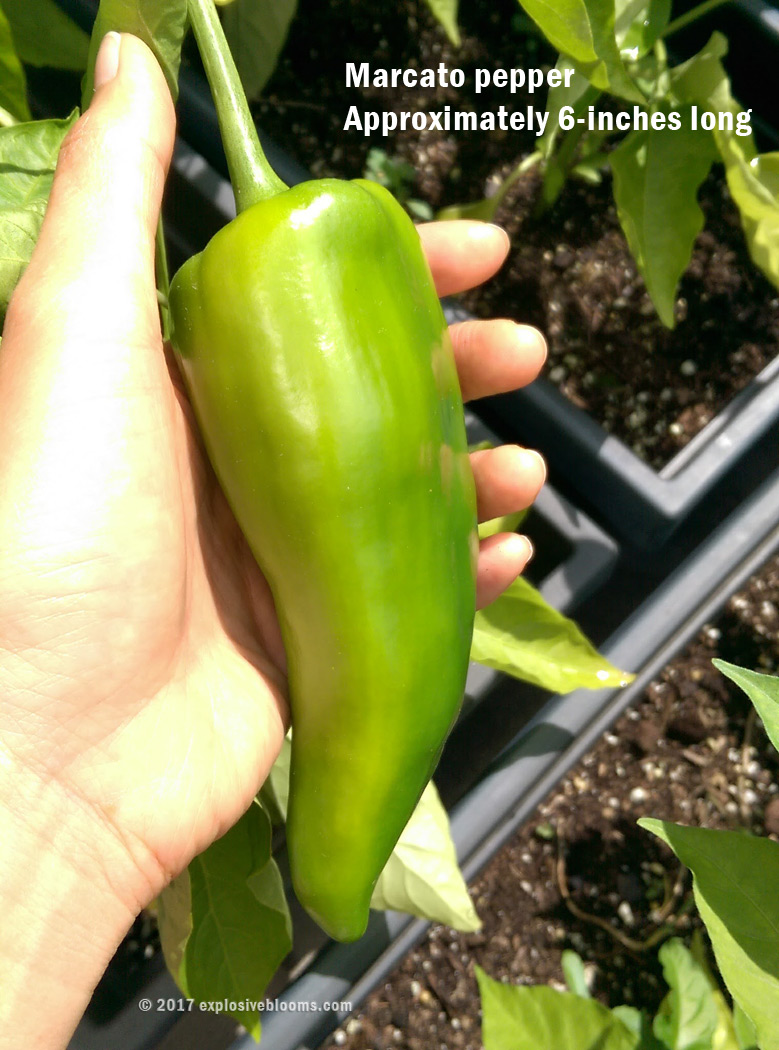 On the good news front, some of my Marianna’s Peace tomatoes are starting to blush! This plant has been a bit of a disappointment as it hasn’t been very productive, though I’m starting see a lot of new fruit setting now – in mid-August! They won’t have a chance, so I’m debating whether I should just remove them so that the plant can focus its energy on ripening the few mature fruit. Similar to the Cuore di Bouef and Chianti Rose tomatoes I’ve grown in the past, the potato leaves on this plant have become mottled. 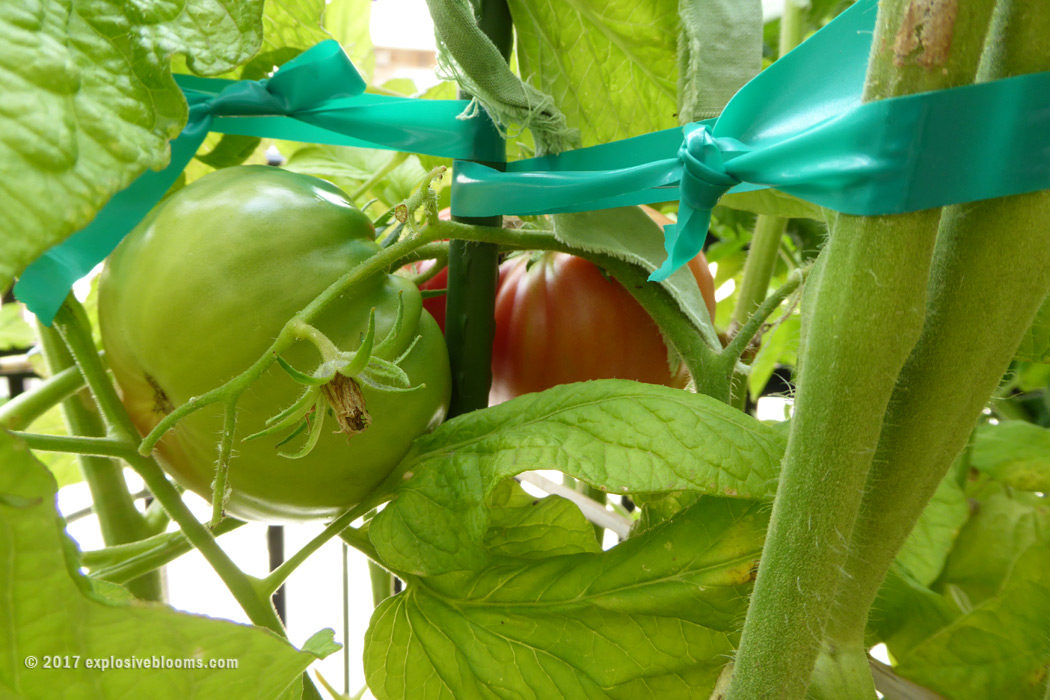 The Green Zebras are looking good, and I found one this morning that is also blushing, though blushing in this case is turning yellow. The others are still hard as rocks, but when we returned from our 7-week road trip last summer in mid-August, the green zebras were not ready yet either, but then I was harvesting like crazy at the end of August and found the fastest way to consume large quantities of this tomato was to make gazpacho. 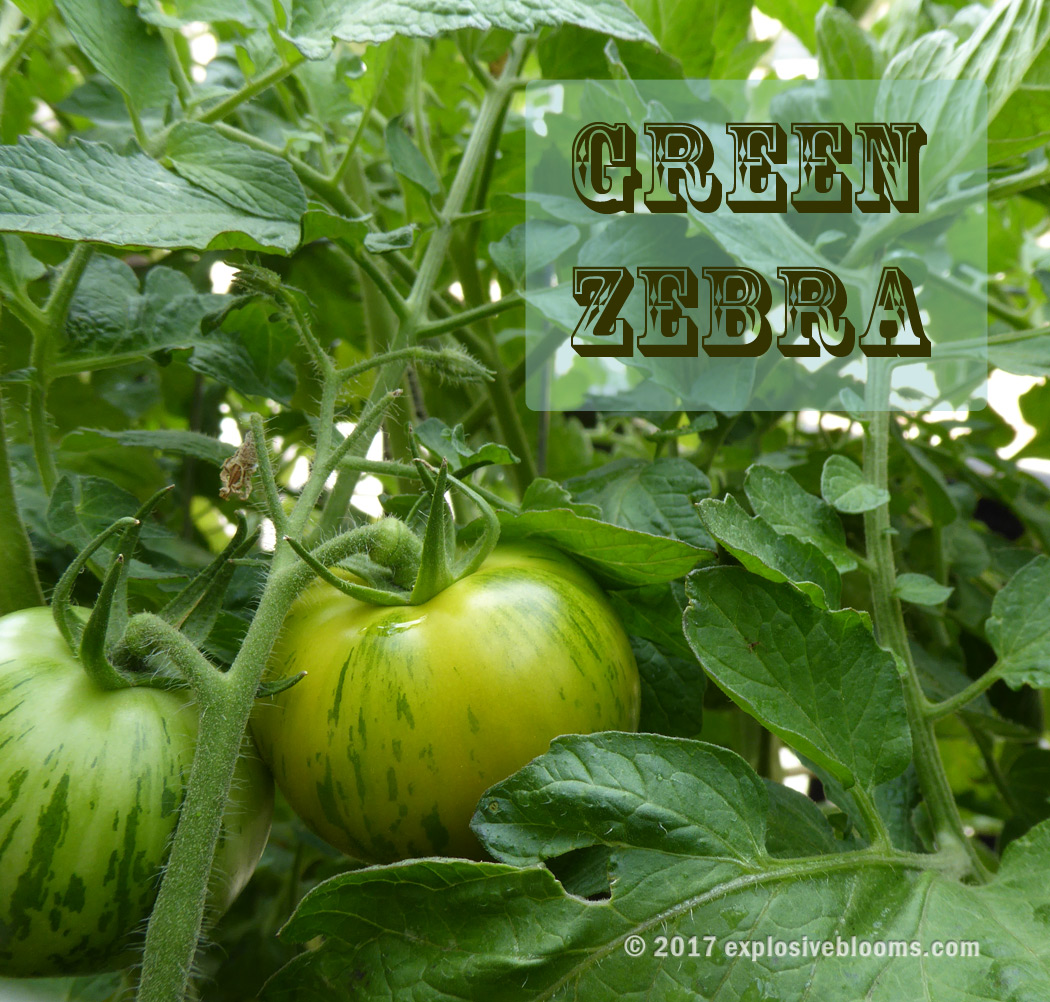 Back at the end of July, I mentioned that my smallest tomato plant suddenly became the tallest plant. 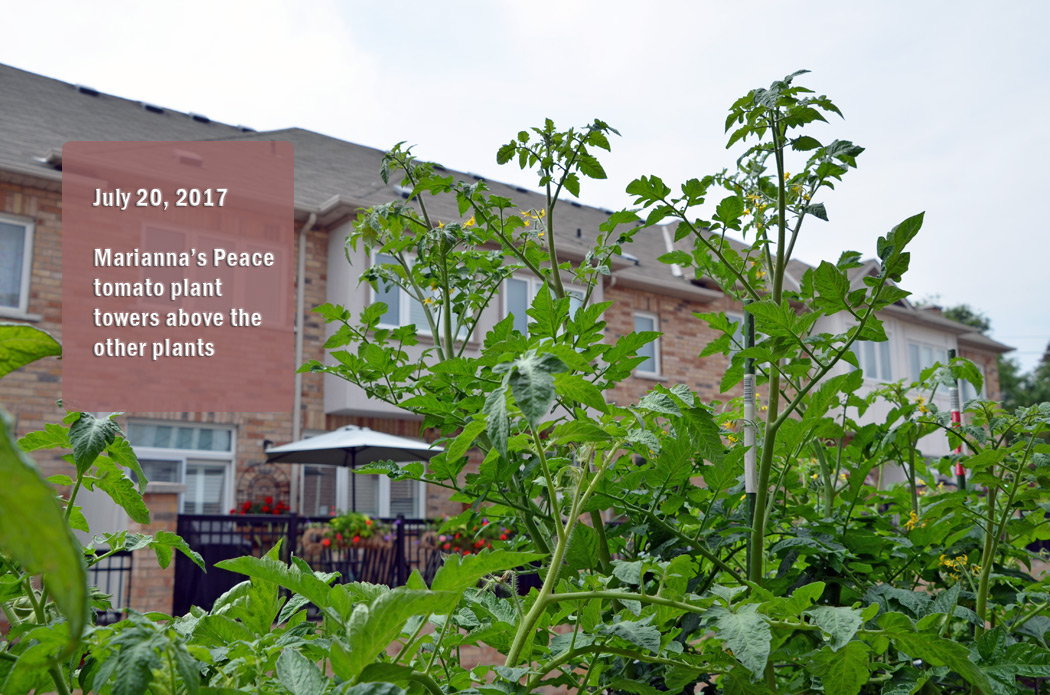 I took this next photo this morning, and notice anything missing? 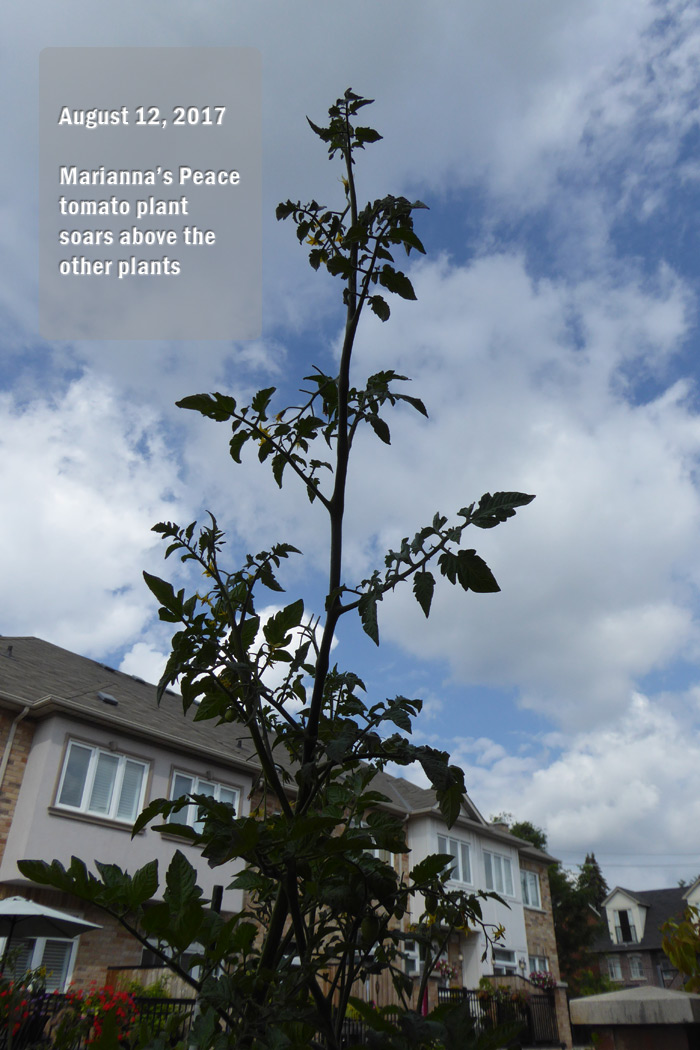 Yes, it’s definitely grown quite a lot taller (use the support pole as reference), but there’s only one branch. Where did the other ones go?

I took a peak over the railing. This is going to be a doozy to harvest, assuming the stems are not damaged and water/nutrients are still getting to the fruit. The challenges of urban gardening! 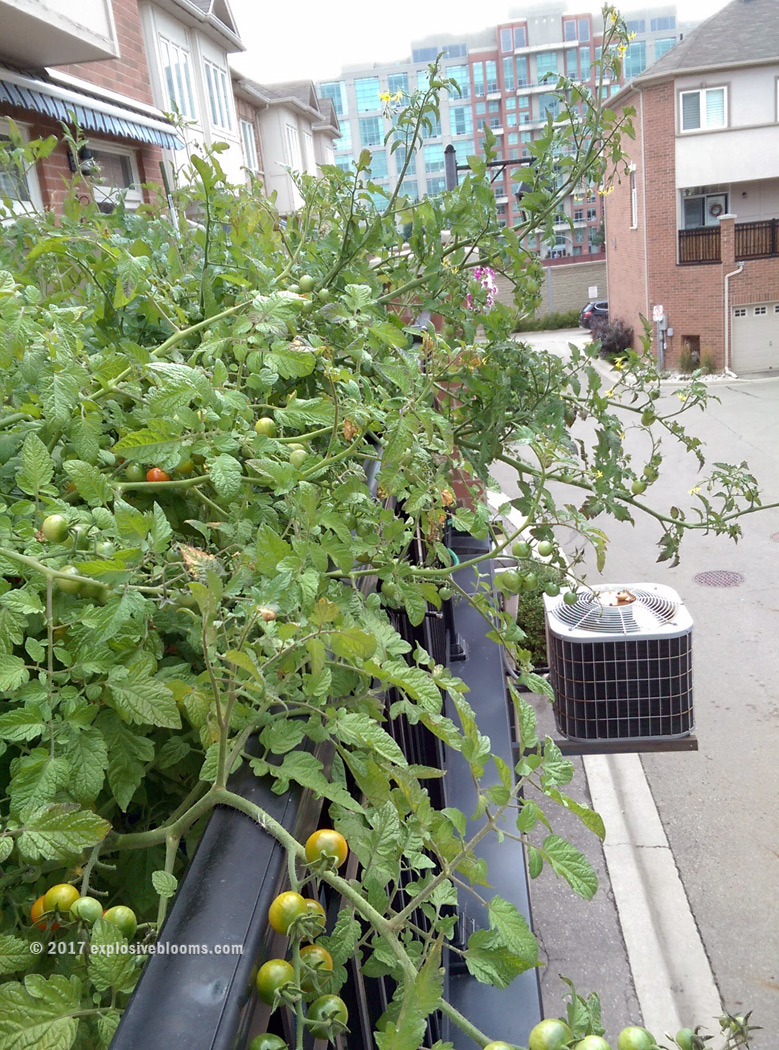 In the forefront is my Sweet 100 tomato plants. It’s doing well in terms of fruit production. At the moment, ripening is happening at a manageable pace in that we don’t have bowlfuls of cherry tomatoes sitting in our kitchen. We’ve had that in the past, and as lovely as that sounds, it’s not a perfect scenario (unless you do eat bowlful of cherry tomatoes daily). Our current situation is that we can harvest a bowlful a day, which is optimal for a household of two. I love the flavour of these. They definitely are nature’s perfect candy – sweet, but not too sweet, with a nice hint of acidity, and beautiful tomato flavour. 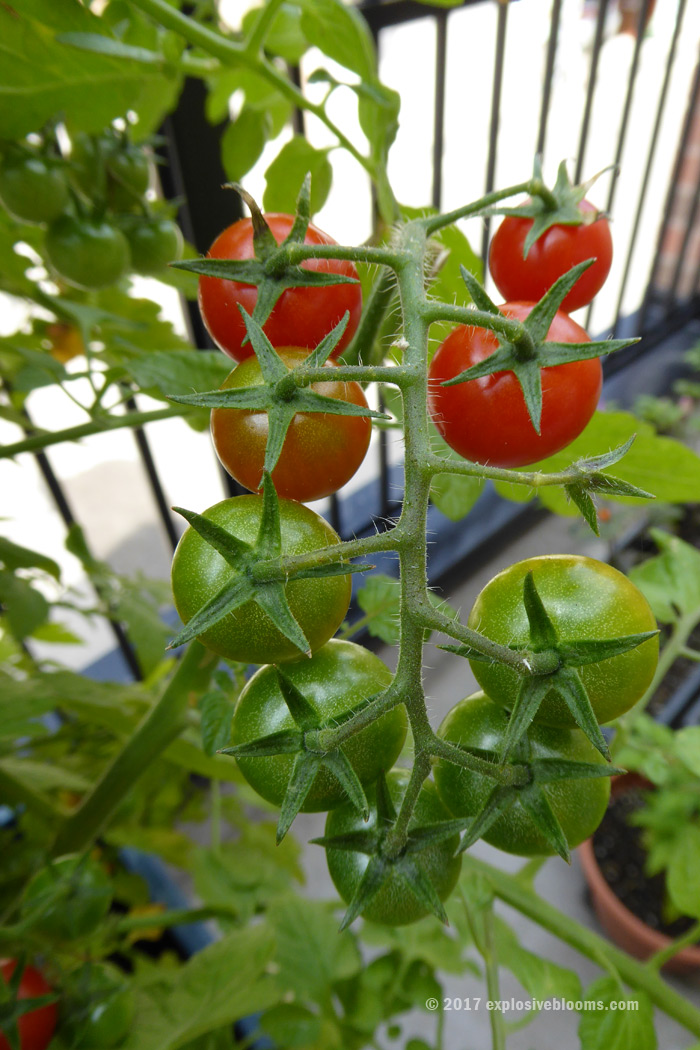 Up until recently, everything was looking good, but then we noticed some whiteflies and some other white bugs. I thought maybe it was mealybug, but maybe it’s a white aphid. I’ve captured some yesterday and will take a closer look under the magnifying lens. During my bug hunting, I think I’ve found whitefly, white aphid, a green aphid, and either a black aphid or some type of weevil – will report back. Nothing in abundance. But when I first noticed the white bug and hubs noticed whiteflies, I quickly mixed up some mild dish soap and canola water, diluted with water and sprayed Sweet 100. I did this for two days, usually in the evenings, and then hosing down the plant. Here’s a photo of one of the white insects I found this morning. I still find some of these on the tomatoes, but the fruit is not blemished. They don’t appear to have wings, and most of them are unmoving (perhaps because they were sprayed with my homemade insecticide). Will keep you posted after I examine the bugs further to try to ID them. 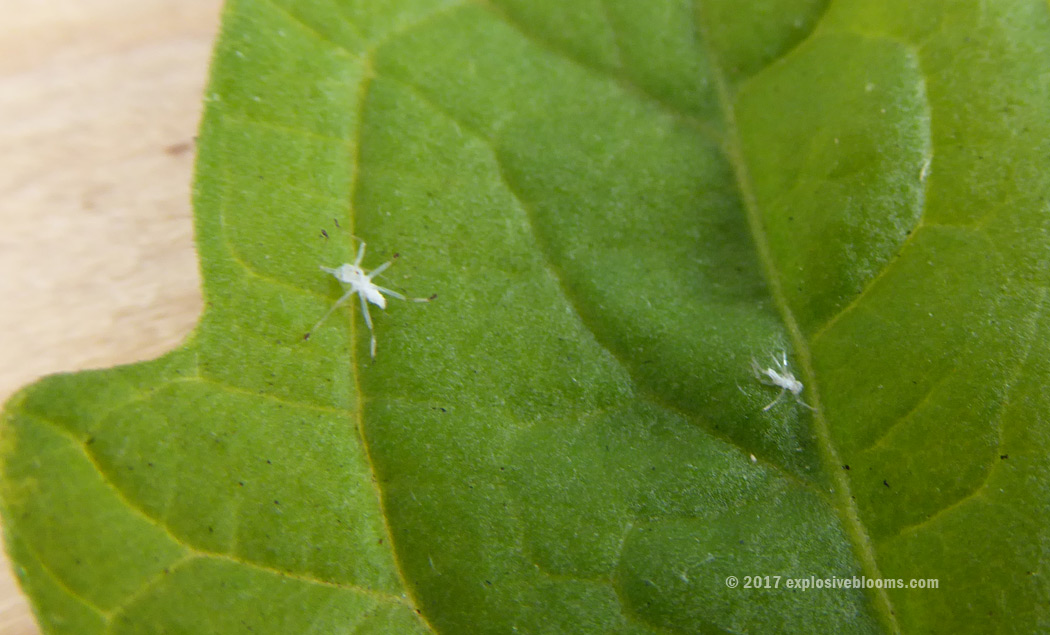