It’s almost midway 2018 and this space has experienced some radio silence. Sometimes I need to write to keep myself focused, but other times I find other ways and things that distract me, which in turns helps me to focus on stuff that is important in the moment. I feel ready to put down snippets of my life in this space. I’ll skip the trip stuff from 2017 as those would deserve their own posts. Let’s start at the end of 2017.

I’ve been knitting on-and-off since 2012. I knit my first sweater in 2014, and to be honest, most of my projects had been hats, scarves, and cowls. I started a new sweater in 2015 and never finished. It was stuffed in my knitting box, out of sight and out of mind. I probably came across it over the years, but wasn’t motivated to finish that second sleeve, possibly because I wasn’t sure I could even find the pattern. One day at work, one of my colleagues (KB) came in wearing this gorgeous sweater. I loved the colour and the pattern, so I mentioned how great it was and asked her where she got it. It’s not a generic, off-the-rack sweater. This sweater had personality and it looked very special and one-of-a-kind. She told me she made it. I was floored and speechless. She told me that she’d be happy to share the pattern with me, even though I offered to buy the pattern. As soon as I got home, I started rummaging through the closet for my knitting needles, and of course that 2015 sweater came back to haunt me. I gently lifted it out of the box and lay it flat on the floor. Memories of buying the yarn came back to me, as I felt the softness of that sock-weight yarn, and I immediately fell in love with the colours all over again – the different shades of green – a beautiful sight during the shorter days of mid-autumn. I knew it was time to finish this. It took me about 2.5 weeks to get it done, and KB had told me about wool wash, which helps relax your fabric and can improve drape and hide imperfections. So I purchased a bottle of this knitter’s magic potion and followed the instructions and lay it out to dry, otherwise known as “wet-blocking”. The sweater that was once quite fitted, now looked so great on me and felt so soft against my skin! It was happening – I found a renewed joy and curiosity for knitting as I opened the pattern attachment from KB. 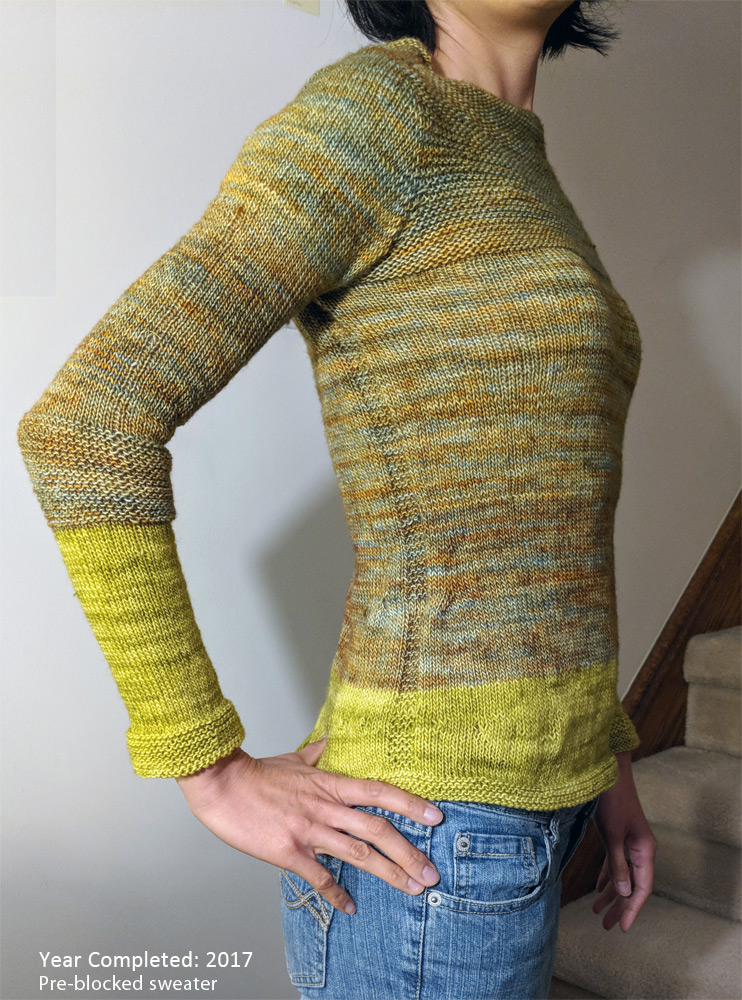 Actually, I have to step back again. Before I decided to tackle KB’s sweater, I had fallen in love with the concept of stranded colourwork and had this idea that I would knit up a fair isle sweater. I shared this new determination with KB and the next day she brought in a book that she felt would be a helpful introduction, pointing out the brief section (a box within a page) about colour dominance. Knowing how much time (and money!) goes into knitting up a sweater, I wasn’t going to jump into this one blindly. I found a pattern for a cowl with colourwork on the Brooklyn Tweed website.

Aside: I pretty much wore this exclusively through the entire winter.

I believe the only distributor of Brooklyn Tweed yarn in Toronto is The Knit Cafe. It’s worth the trip. Well, for me it’s worth it because I love their Shelter line, and I haven’t found a notable contender yet. Truth be told, I didn’t love it at first as the yarn started to feel a tad rough and I found myself moisturizing my knitting fingers frequently. But my skin adjusted and now I love working with this lofty wool. (Spoiler alert – my KB sweater is made from the same yarn) This cowl pattern was an amazing joy to knit up. Yes, it took some experimenting to figure out what method worked best for me. I had hoped that I could hold the yarn in both hands (one colour in each hand), but I found English-style knitting (right-handed knitting, or throwing) was slowing me down. Maybe I need to give it more time. I experimented with holding both colours in my left hand (continental-style knitting, or picking), and that also took some getting used to, but at least it felt much more natural to me as I am naturally a left-handed knitter. The top of my cowl is a little tighter than pattern, but this actually works out better for me as it keeps me warmer. After wet-blocking, this piece is soft and warm. 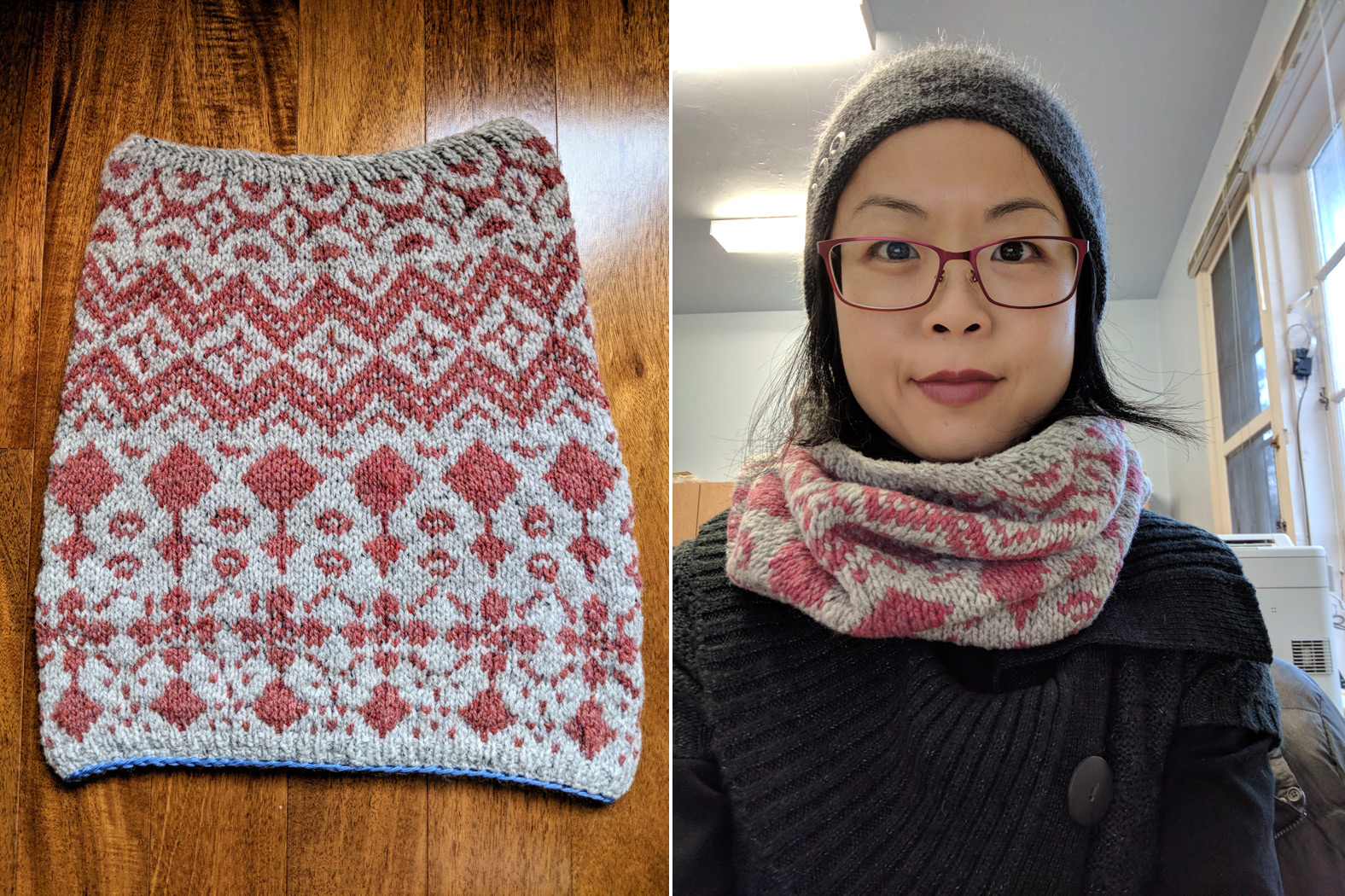 This brings us to the start of December 2017 and the passion for knitting and learning is still fully ignited. Why not learn how to knit socks? Remembering that dreaded feeling of having to knit up a second sleeve, I did some research to find out if there’s some way to knit the pair at the same time. Enter K2AAT (knit 2 at a time). I had already learned and love knitting on circulars, so when I read about using extra long circulars to knit back-and-forth, I leapt in head first and have not turned back. In the process I also learned about lifelines. Maybe this pattern just wasn’t the right one to start with (a lot of purling), but unlike many knitters, I do not love sock knitting. This project took me 3-4 weeks to complete and I have not had any desire to knit anymore socks. 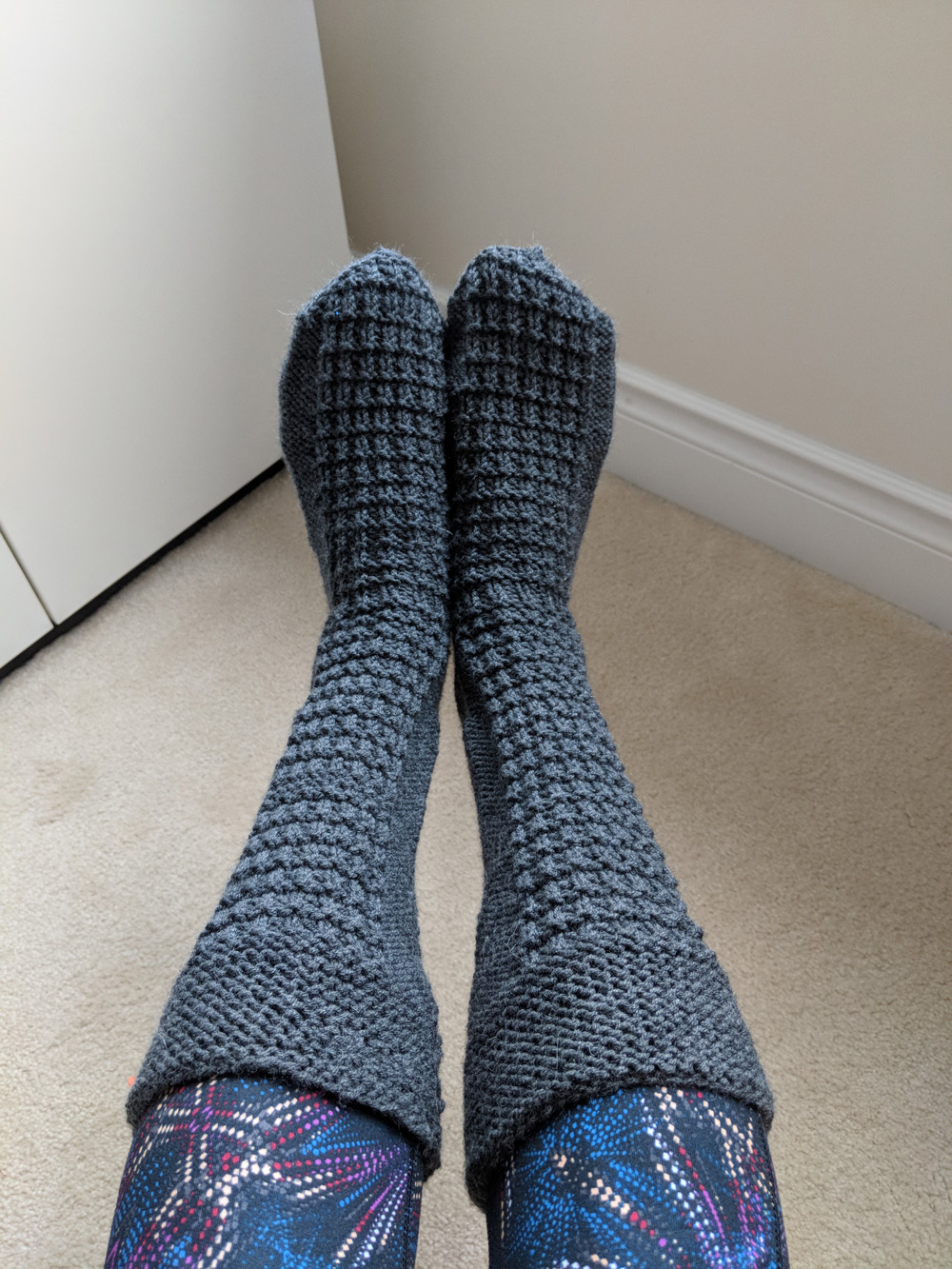 As I was finishing up the socks, as all crazy knitters do, I had started on another project. My first pair of mittens! Mittens, like socks and sleeves, come as a pair and you are faced with the high probability of experiencing second sock/sleeve/mitt syndrome.  And in this case, I was not brave enough to k2aat. On top of that, this project has a second component that is not for those that find thrumming tedious. Yep, for my very first pair of mittens, I chose thrummed mittens. All I can say is that this is an extremely time consuming project, but you do end up with crazy-warm mittens. It’s no surprise that your hands get hot quickly considering they originate from Newfoundland where guys on the fishing boats wear them. I have not yet worn them in public. I spent a lot of time over Christmas break knitting these up. 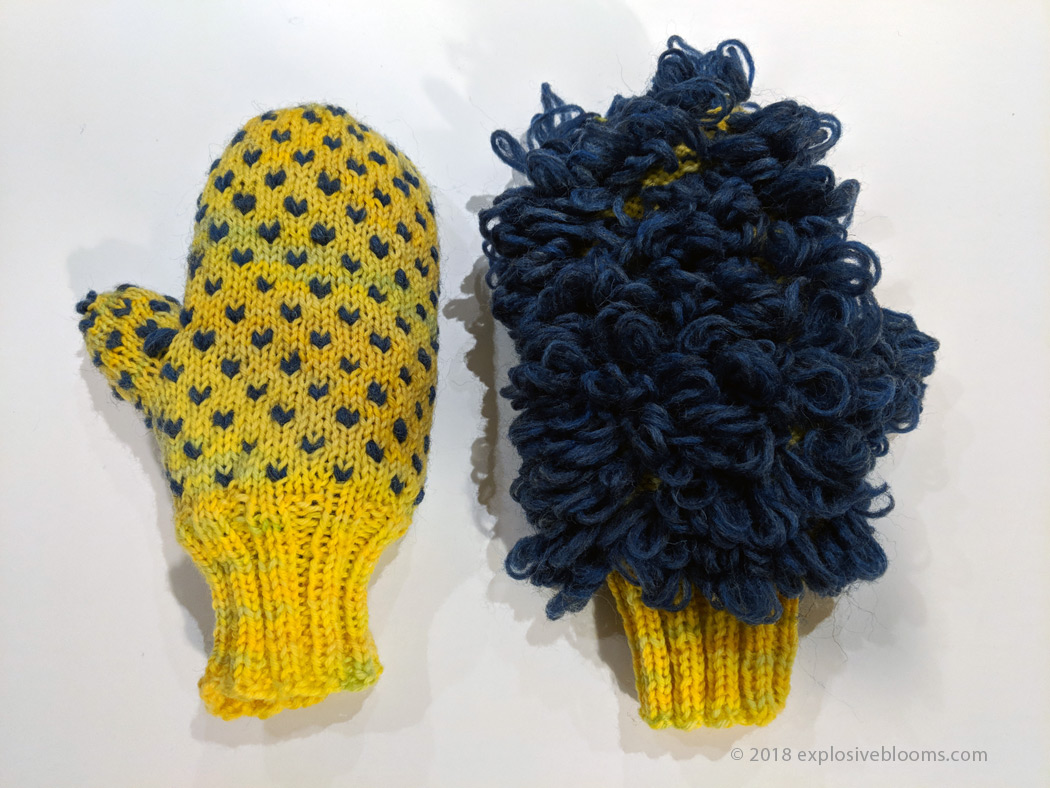 You would think that I would never want to knit mittens again after the thrummed mittens, but on January 1, 2018, I started knitting up colourwork mittens and this was when I learned the importance of gauge swatching through not knitting up a swatch. Let’s just say I ended up ripping apart my work three times, but more on this project later. After realizing the size was all wrong, I put aside the project and I started another colourwork cowl as a gift for a friend. 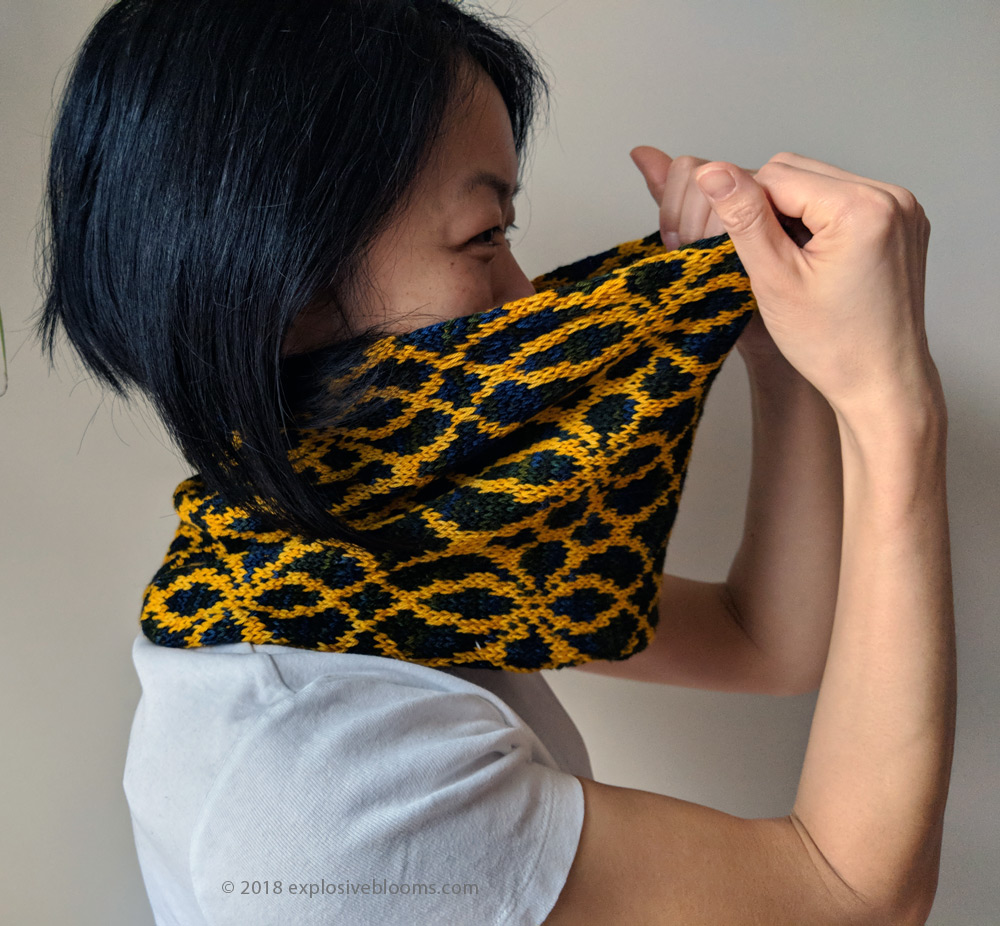 With the cowl completed, I decided to try my hand at a sweater again. I said earlier that I had wanted to knit a fair isle sweater, but now I wanted to knit up KB’s sweater. I had purchased the yarn just after Christmas during their boxing day sale. This time I swatched and swatched and swatched until my gauge was close to pattern. I read many project reviews on Ravelry to get pointers. I read the pattern over-and-over (it is the most complicated pattern I’ve used to date). I took a deep breath, and I started. To make a long story short, this project required a lot of Google searches, but somehow I managed to get through the project in about 8-weeks. Even knitting up the sleeves 2aat, that part felt like it took forever. Figuring out how to stay in pattern as you increase or decrease was also baffling. Luckily the pattern is very textured, meaning imperfections are not easily spotted. The pattern is visually stunning, but oh boy is that double-moss stitch a yarn hog! This sweater required eight full skeins of yarn, which makes this a $130-ish sweater (not including my time). But I love, love, love it! I am so proud of it. It’s bulky and warn, but not heavy in weight because of the lofty yarn. Of course wet-blocking this requires a fan to speed up the drying process. I only had the chance to wear it twice this year since I only finished it mid-April. 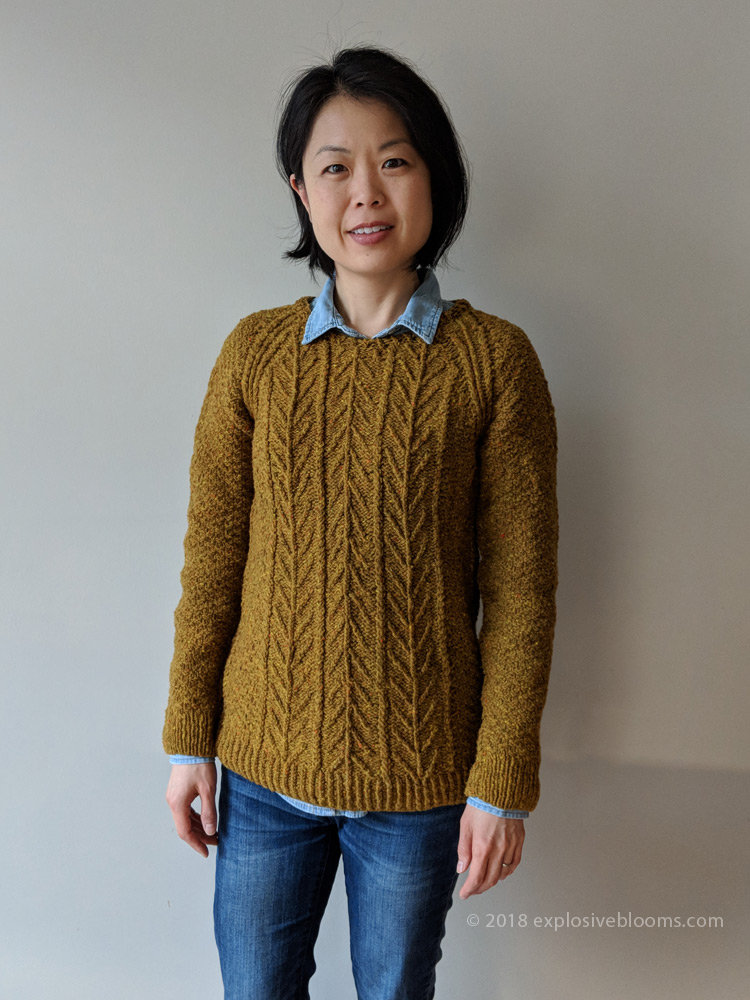 As soon as I finished knitting the sweater, I decided to complete the owl mittens before hibernating my knitting needles for the spring/summer. After figuring out how to alter the pattern to fit my hands, I managed to complete the pair. And to make this project my own, I inversed the pattern colour, which meant I did not k2aat. Unlike “regular” knitting, I don’t get bored knitting a second item because I am still equally fascinated to see the (same) pattern come together. 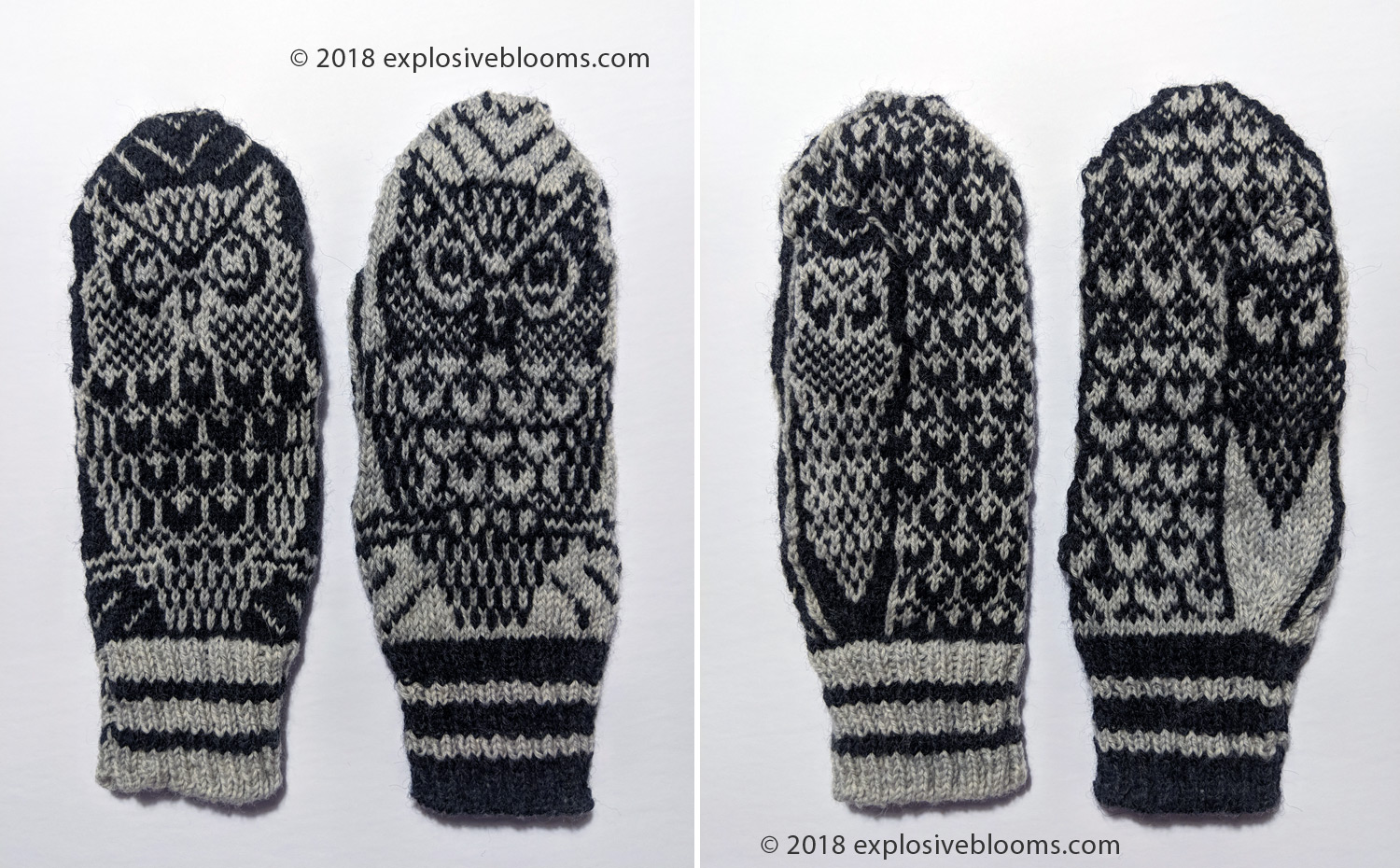 Looking back at those five months of non-stop knitting, I am surprised at how many projects I completed. That’s the most amount of knitting I have ever done since I started knitting. I loved the opportunity to learn something new with each project. And who knows, maybe I’ll pick up my needles before the summer is over. Some people meditate to relax, but I found something so soothing and cathartic, and at the same time so mentally stimulating in knitting. Many times I felt like a knitting addict as I would rush home from work and immediately pick up my knitting. With each round, I’d tell myself I’d only do one more round and get on with other things. I was knitting as an escape and as a way to help me focus and work through whatever things I needed to work through. And at the end, I had something beautiful to hold that I was proud of. Looking back at progress photos of my projects, many memories pop into my head, as if each piece represents something bigger.

What is your equivalent?