It was a tough day today because of the heat, but the vistas were wonderful! Our day started with a shuttle ride to Robion, where we discussed today’s ride at a small cafe. The sun was already quite hot and we were rolling out the patio umbrellas. The first four kilometers were ok with a few steep sections, and then we hit this hill…at the top was Oppède, a small town. So small, Elsa called it a building. By the time I made it to the top, I was drenched in sweat. It was not pretty. Most people kept going, but hubs and I stopped at the cafe to taste their fresh apricot juice. 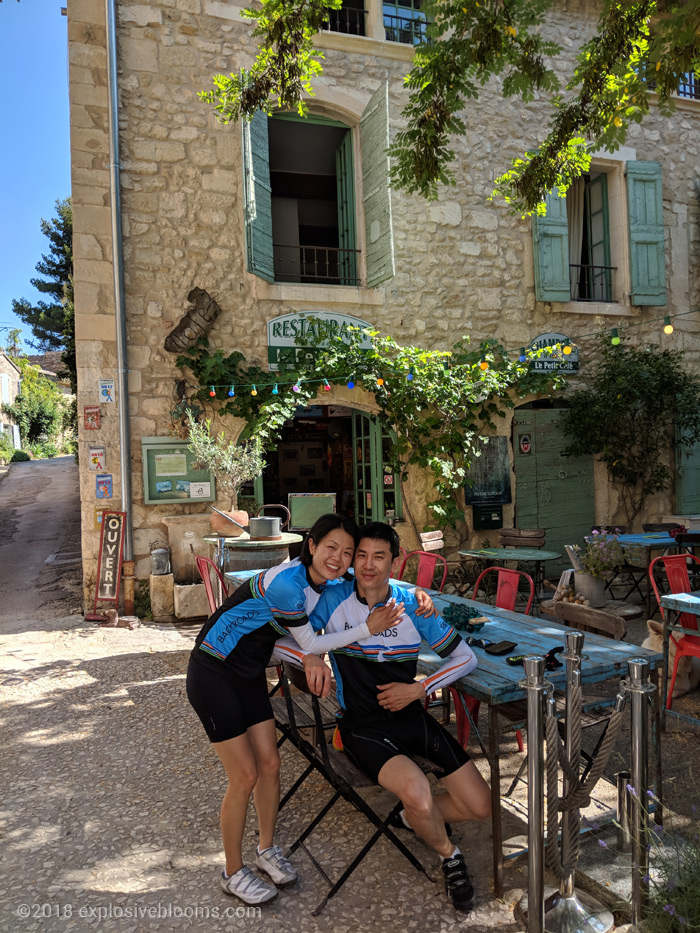 The juice was refreshing, but I wasn’t expecting it out of a bottle. Still good though! 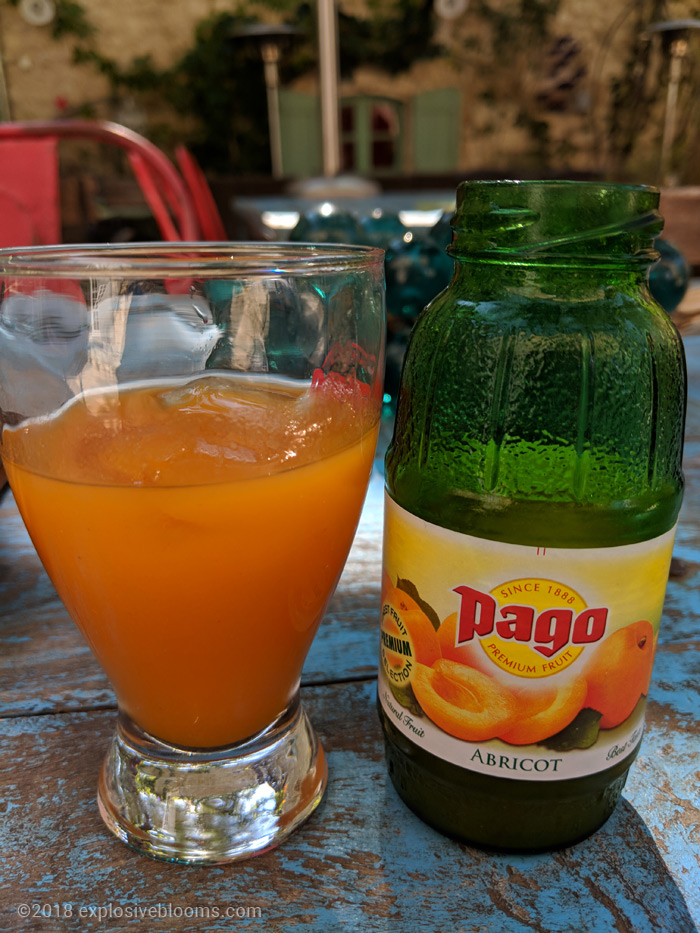 As we continued on, up-and-down, we rode past vineyards, a lavender field, and farms with wild poppies growing along the side of the roads. 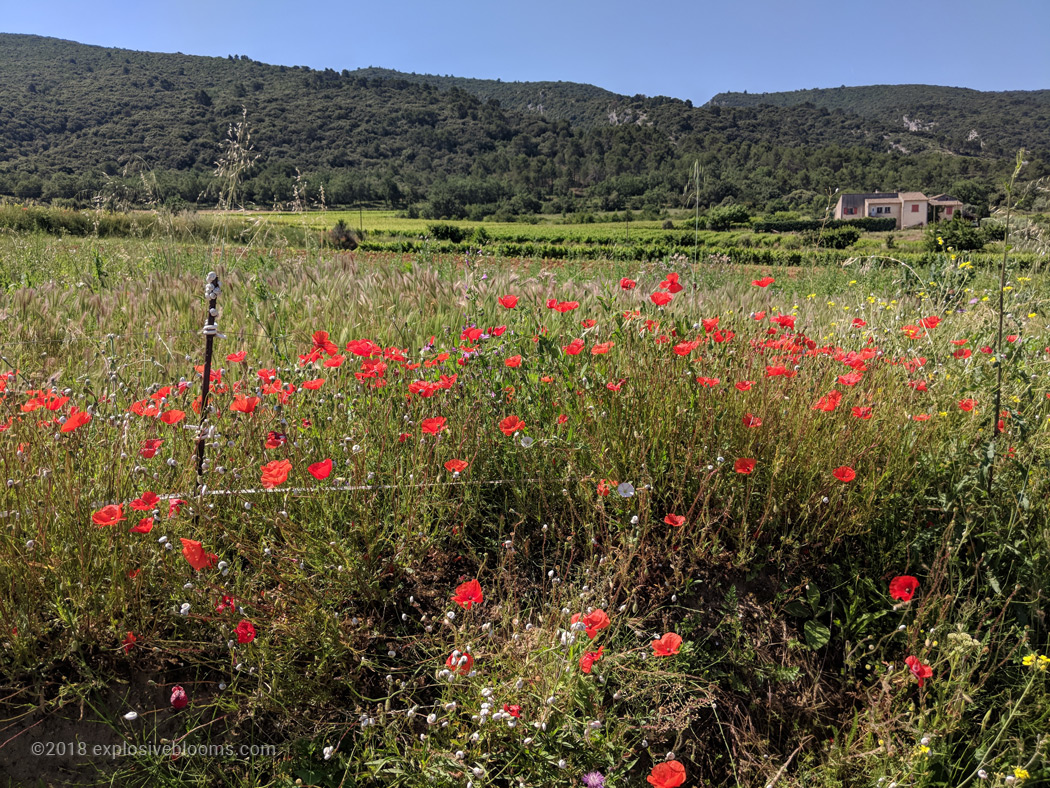 We finally reached Château de Lacoste – the ruins (exterior) of a castle that is now owned by fashion designer Pierre Cardin.

Francis told us briefly that this castle had originally be owned by the Sade family since the early 1700s and that controversial author Marquis de Sade tortured people in the castle. For Cardin, the castle and the grounds acts as his country retreat, as well as a space for him to host concerts and operas.

The road leading up to the castle is long and you don’t really know what to expect right away until the road levels out. There is a lot of surrounding land. I excitedly dismounted and reached into my trunk bag to grab something, only to feel a lot of wetness. My peach from breakfast had exploded and everything was wet and sticky. Camille quickly grabbed me a spare trunk bag from the van and told me he’d take care of the soiled bag. After rinsing my hands at the water cooler, I started to walk closer to the castle. When I was told we would visit a castle, I pictured something more castle-looking. From the outside, it looks like it’s falling apart, but apparently it’s quite tastefully done inside. And the views – c’est magnifique! 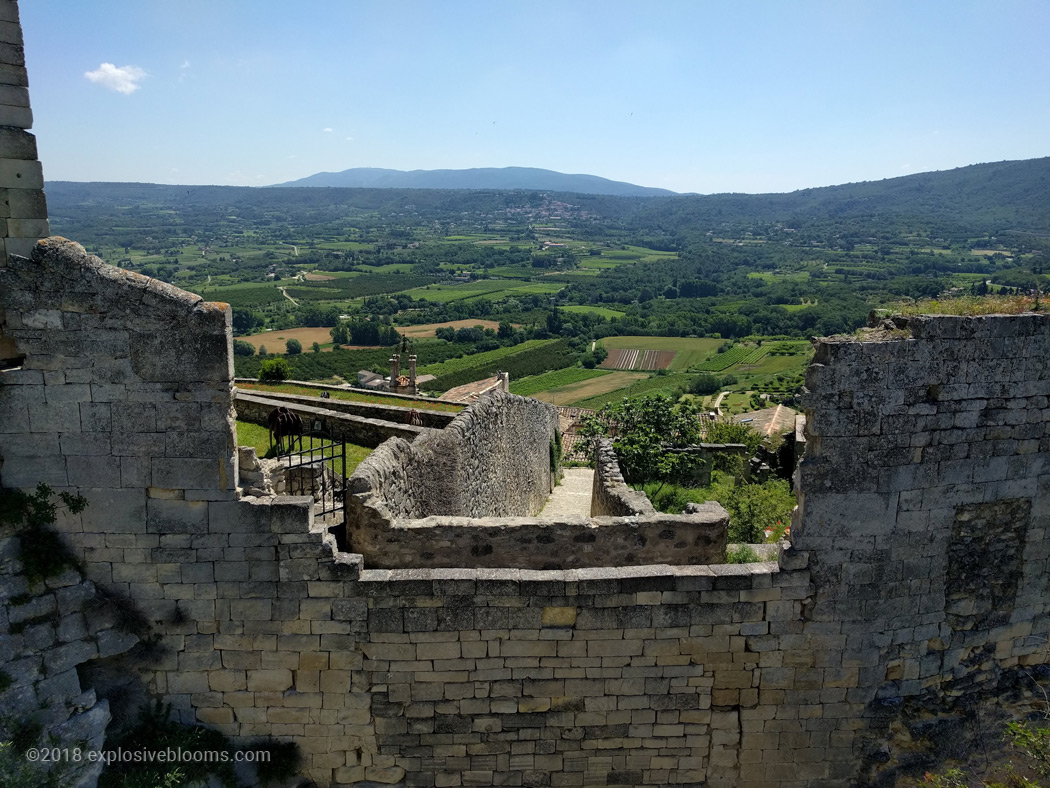 There was a way down a little further, but given that we appeared to be the last few riders to stop here, we decided to keep riding to lunch. We ate a few more of the deliciously sweet strawberries before continuing. It was a sweet downhill for about 8 km, and then of course, we have to work to get to the lunch spot in Goult. 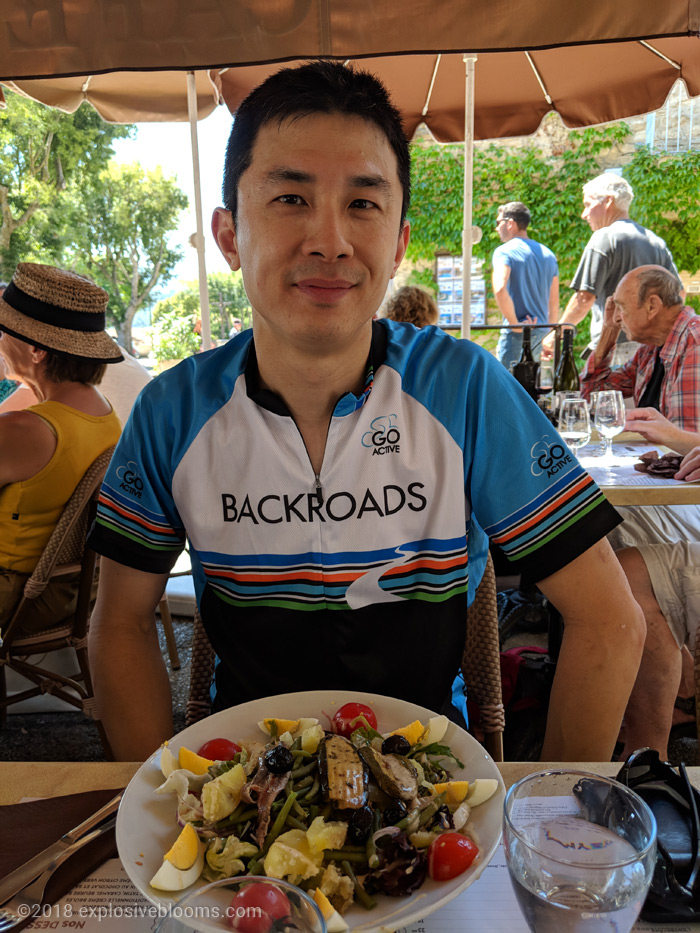 With the heat, my feet were swelling, so the incredibly long lunch allowed me to rest them. Unfortunately there was no cold ocean to soak them in, so even after the break, I wasn’t confident I could continue much longer. And because I was so hot, I didn’t have much of an appetite. The salad was delicious, with hard-boiled egg and sardines, but I was unable to even finish half the bowl. In my defense, it was a large portion.

The riding after lunch was on a flat bike trail, parallel to farmer’s fields and lavender fields. We stopped at Pont Julien where Francis was kind enough to stop and take photos for us. 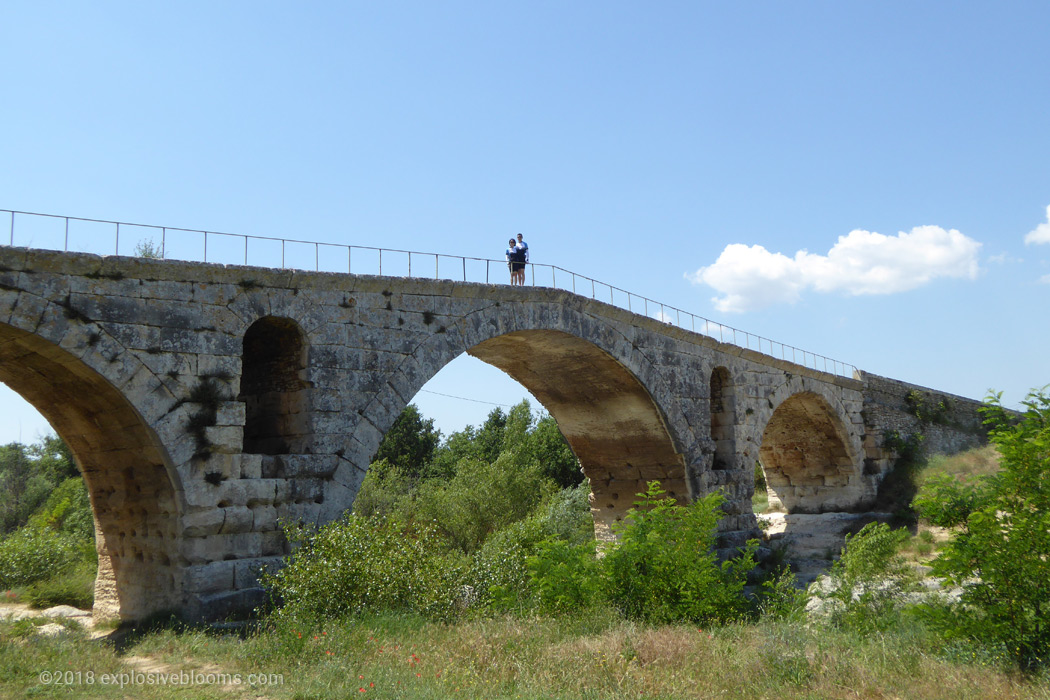 From here, another hill up to Roussillon, another hilltop town, but this one rests on one of the world’s biggest ochre deposits. 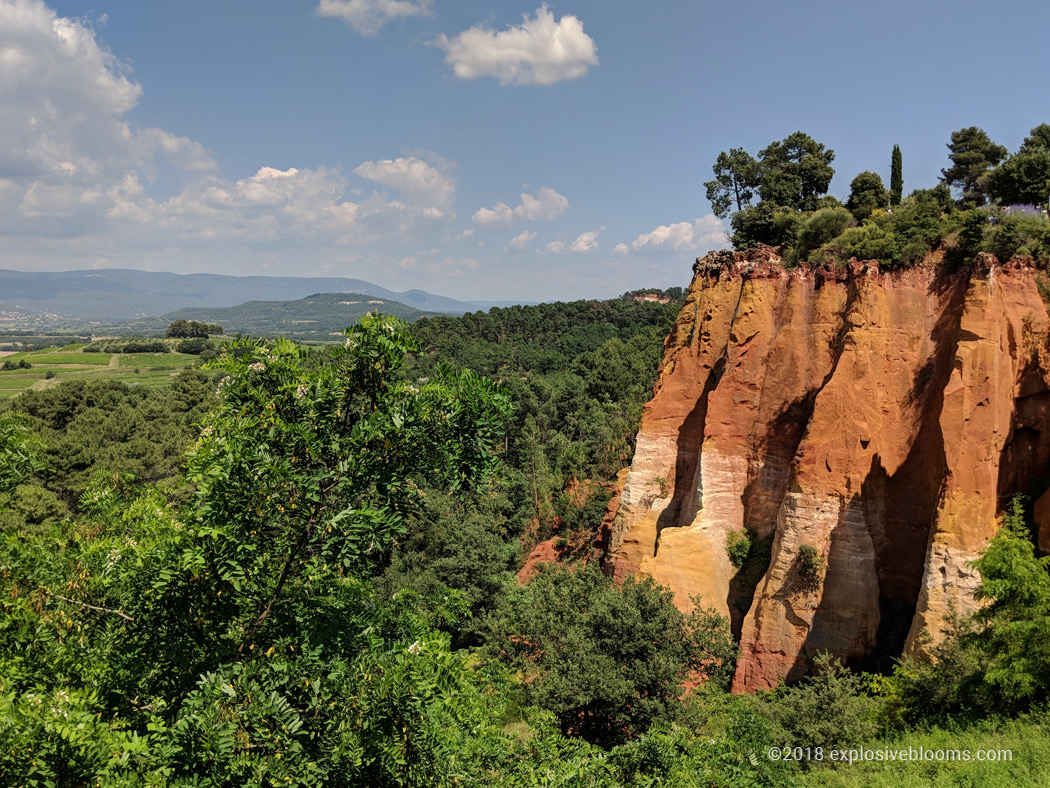 At the next stop point, not too far from this over-crowded photo-op spot, the Backroads vans were parked near a public water tap. Most of the other riders that opted to ride after lunch had already parked their bikes and were walking around the town, or they were back on the road. Have I mentioned that I was so hot today? Camille suggested I dunk my head under the tap – it was so refreshing! Had there not been so many other people around, I would have peeled off my shoes and socks and put my feet into the fountain. I was done at this point, and with a heavy heart, I told hubs I couldn’t go on today. I needed to take the shuttle to the hotel. I hate doing this because I feel like a quitter, but I know how bad the foot pain can get and I didn’t want to reach that point. This decision turned out to be a smart decision.

Once Camille had packed up the van, he said we’d take a short route to the hotel, but I wanted to check on hubs so he agreed we could drive the same route as the riders. We did run into hubs (he rode pretty far!) and I rolled down the window and started hollering and cheering him on. The views were quite nice, as you can see from this pic that hubs took of a lavender field (wish I could have been standing in front of it). 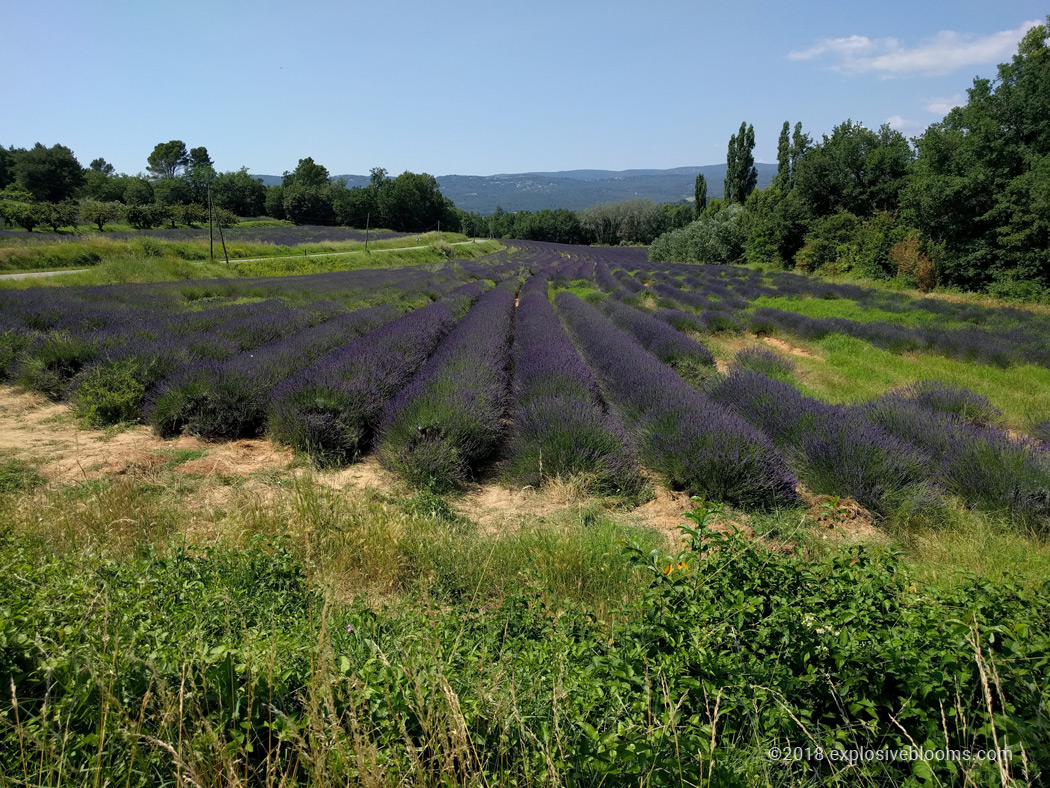 The ride to the town where our hotel was, was of course uphill. Once we seem to enter the town, I was thinking this wasn’t such a bad ride, but Camille said this was not it. We have to keep going. And we kept going, and going… it’s a horrible tease for the riders.

Jump ahead, I arrived at our hotel and checked in. Our room was the size of a closet (with no closet), but the pool looked so inviting. I immediately threw on my swimwear and jumped into the pool. It was divine!

One of the other riders had also come back via shuttle, so we had time to hang out, talk about life, travel, and how crazy our husbands were (regarding Mont Ventoux). It was a long time before the first set of riders arrived, and soon after the rest showed up. Nobody loved that ride to the hotel. It wasn’t specifically because of the steepness of the climb (it was a challenge), but for most people they said it was the intense heat. So even if my feet had been ok, it sounds like my time was better spent in the pool.

Dinner that evening was at the hotel, and we had the most incredible scenery! None of us wanted to leave this hotel. It was so lovely. 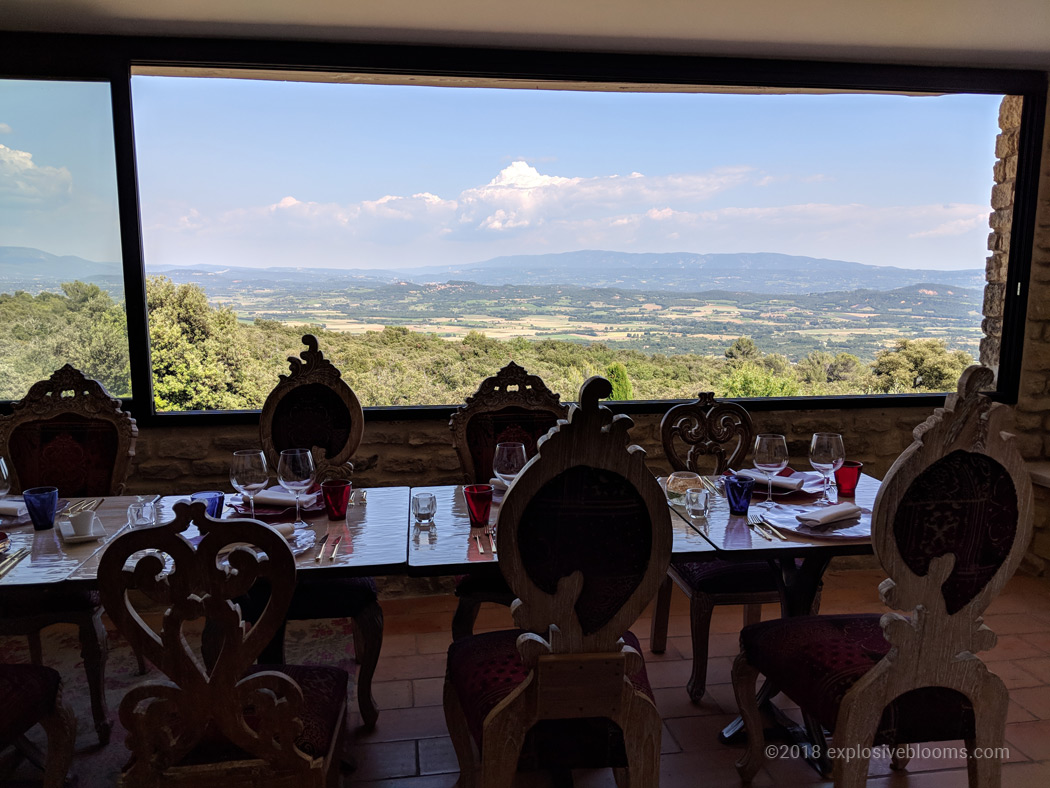