I should mention that as of yesterday, we are in the region of Luberon, which has some lovely hilltop villages and towns. Today we had the option to ride to the Abbaye de Sénanque, which you might recognize from photos like this. To be honest, I was really looking forward to this; however, Elsa was honest and let us know that the lavender was not quite in full bloom, so it would not look as exquisite as in the photos. This fact wasn’t the issue with riding to the site. It was the fact that you would ride down to the abbaye, and then have to climb back out and the climb would be similar to that of the climb to the hotel yesterday (which I skipped). In the route wrap, Elsa does mention that if we are looking to log more mileage, but dislike the heat, the ride to the abbaye would be a better option than the extra loops in the afternoon. The afternoon loops are beautiful and steep, and we would be tackling those during the hottest part of the day. Given that hubs was going to attempt climbing Mont Ventoux tomorrow, he was ok with the short option. I agreed to the short option as the climb out the abbaye was so early in the day that I didn’t want to hit the wall so early by having swollen feet problems. The other Toronto couple in our group did the abbaye loop, and he said it wasn’t anything special (because the lavender wasn’t in full bloom).

So this morning’s ride was interesting. The ride started with a a downhill, with a photo stop where we snapped some photos of the town of Gordes. And then the downhill continued.

Hubs flies down much faster than I do, so we agreed I’d catch up at (I can’t remember where we said). The downhill is a long and fast, so I was flying and I overshot the turn but quickly realized I had missed the hard-to-miss turn (and apparently hubs had done the same thing before me). I turned around and ran into Christie and John. I passed them as they stopped to take photos, but then for a very long time, I couldn’t see them behind me, nor was I catching up to anyone ahead. I had many moments of doubt, worried that maybe my Garmin GPS was broken or that the loaded map was the wrong map, but I had nothing else. I had to trust the Garmin. I took in the beauty around me, but I didn’t stop for photos as my goal was to catch up to hubs (or anybody). Then came a point where I had to make a decision. I was maybe 30 minutes now into riding completely alone and not seeing another rider. The path ahead of me was gravel, short but steep, and twisty. If I went down this section, it would be a total bitch to climb back up if this was not the right way. This was a dicey descent but I committed to going down and just as I made this decision and started the careful descent, out of nowhere John appears right on my tail. I am so relieved to see a familiar face!

We ride together for a while, and I finally ask if we should stop and wait for Christie. Thing is, Christie has an e-assisted bike, so she can easily stop anywhere to take photos, and quickly catch up. Christie told me that it’s actually hard to go too slow, so she does encourage her husband to keep riding when she stops for photos. John and I reach this town (Fontaine de Vaucluse), but we ride through. I ask him if this was the coffee stop, but neither of us had saw a van, so we kept going a little further. John decides he should wait for Christie, so I carry on (and it becomes confusing for the next 100 m). I didn’t stop for photos, because I was still on a mission to find my husband, but hubs took photos of the area where I left John, by an aqueduct just ahead of a lovely tree-lined street. 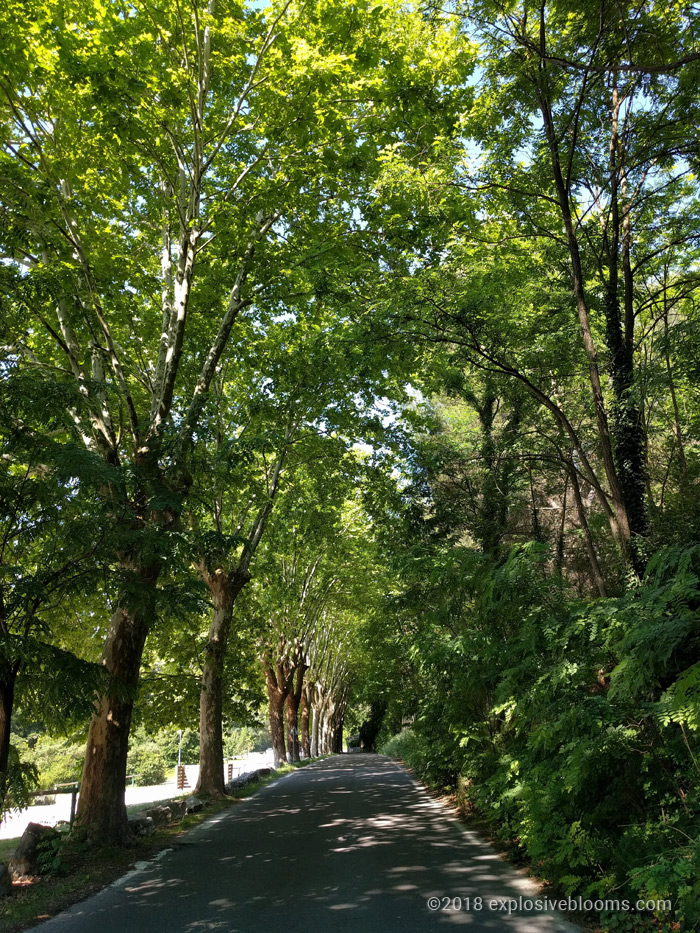 The Garmin was going a little bonkers here, telling me I was off-course. I think I saw a bike lane on the left, but this street was not high traffic, and it looked so lovely, so I kept riding. And then I see the aqueduct. I think after riding under, this was where my Garmin was really confusing me, and I even circled back once. 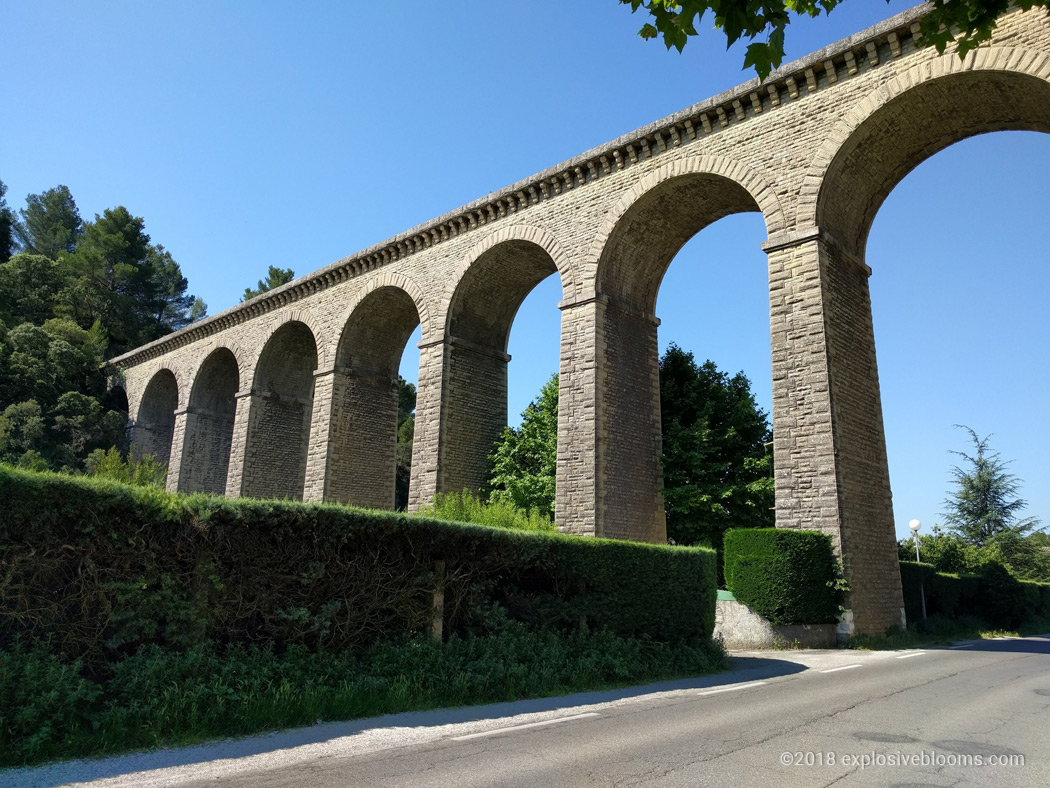 I stayed on the road, and eventually my Garmin was happy with where I was. This section was a bit of a climb. I was feeling good and my legs were feeling strong. And then I hear my name and assumed it was John, so without looking back, I yell hello. But as I glance into my mirror, I realize it wasn’t John, but Camille, so I stopped. It turns out that Fontaine de Vaucluse was the coffee stop and that everyone was there! Apparently hubs was getting worried because he hadn’t seen me yet. Camille asked if I wanted to turn back with him, but I was already where I was, so why not keep going? I think the concern was that I’d have no support because Elsa was on her way to the winery (our lunch spot) to set up our picnic. I reassured Camille that I’d be fine riding solo, and that I’d go slow and enjoy the ride. And if Elsa was still setting up when I arrived, I could help her out. He reluctantly let me go and promised to let hubs know that I was fine.

I continued climbing and when I reached the first major intersection, I pulled off to the side of the road and had a gel pack and more water in a shady spot. I stopped for photos of pretty roadside flowers, like the Catananche Caerulea and the Malva sylvestris. 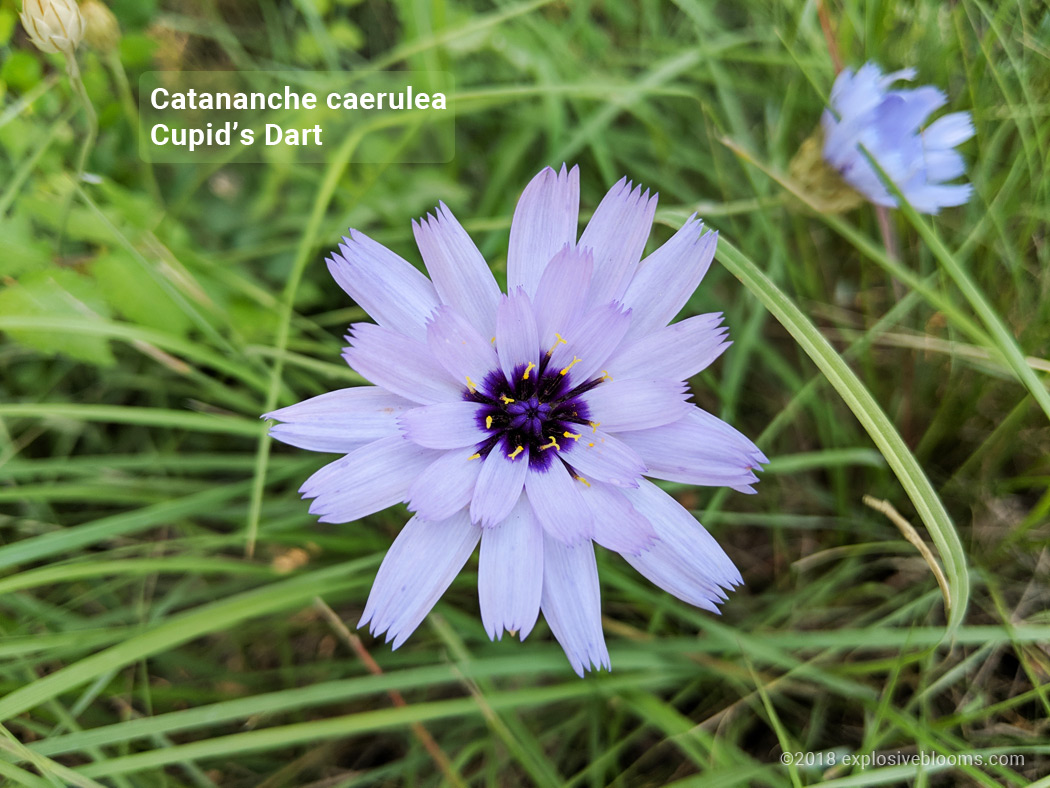 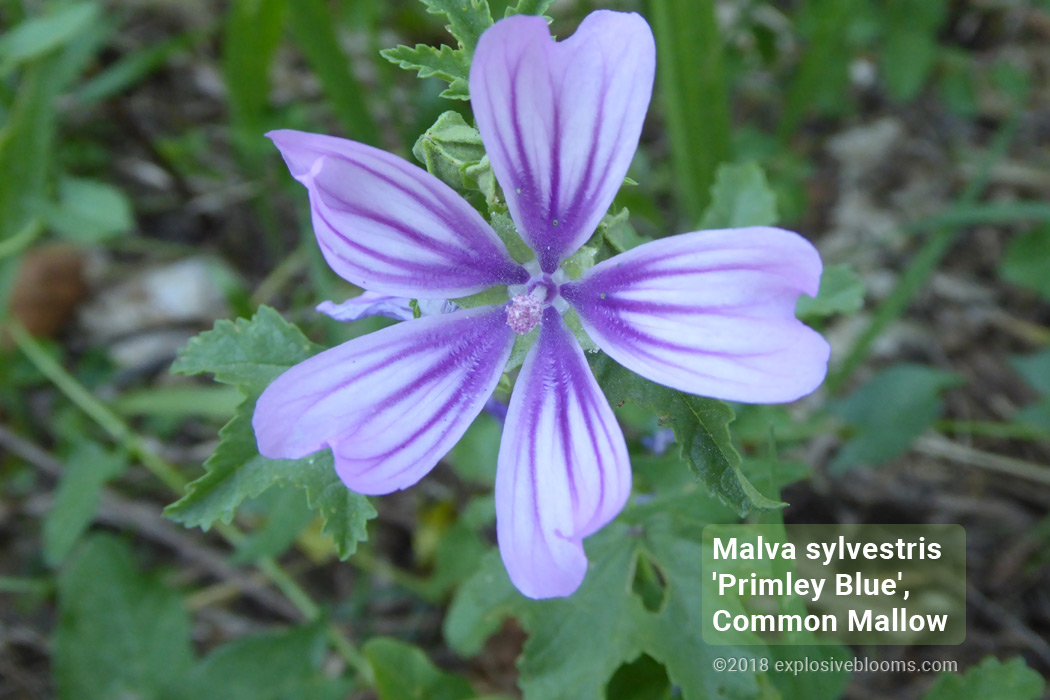 Then there was this amazingly fun section of winding downhill with some spectacular views. I had actually considered turning around and riding back up to get some photos, but I didn’t want to expel more energy. Luckily hubs got a video, except a GoPro mounted on handlebars isn’t the same as a swiveling head, so you’ll just have to trust me on the views. Where his video stops is the spot where I wasn’t sure which way to go. It was either a steep uphill, or a steep downhill, so after letting a couple of cars go ahead, I decided to try the uphill first. The Garmin immediately let me know that was off-course, so I turned and did a sharp right down the super steep section.

About 15 minutes past this point, I had stopped to take some photos of the vineyards, and that’s when hubs caught up to me. How serendipitous that he should be filming when he found me! I was so happy to be with him again.

Turns out we were only minutes away from the lunch meeting spot. As we hit the intersection, Elsa was waiting in the van. She apologized, but something had happened to one of the riders in our group (broken collarbone), so she gave us some instructions for when we arrived (where the picnic was set up, where we could find the bathroom, please help ourselves to drinks in the coolers). I knew she was pre-occupied, so we grabbed our day-bag out of the van and reassured her we would be fine on our own. I’m actually extra relieved that hubs was with me now!

The lunch setup was on the grounds of a winery, behind their restaurant in this very shady spot. Stools had been put out for us. Hubs and I made ourselves comfortable under the sycamore trees, chugging cold juices and waters. The rest of the group were still riding (since they all stopped for coffee). The rest of the group arrived about 30-45 minutes later, though Elsa arrived before them and had a chance to start putting the food out. It was quite an impressive spread! Everything was so savoury and delicious – I went up for seconds. Hubs may have gone up three times. Backroads’ picnics are not your average picnics – they go all out! I actually really loved the lentil and chickpea salad. The cheeses and cured meats were also so good, but in France, all cheese is delicious. 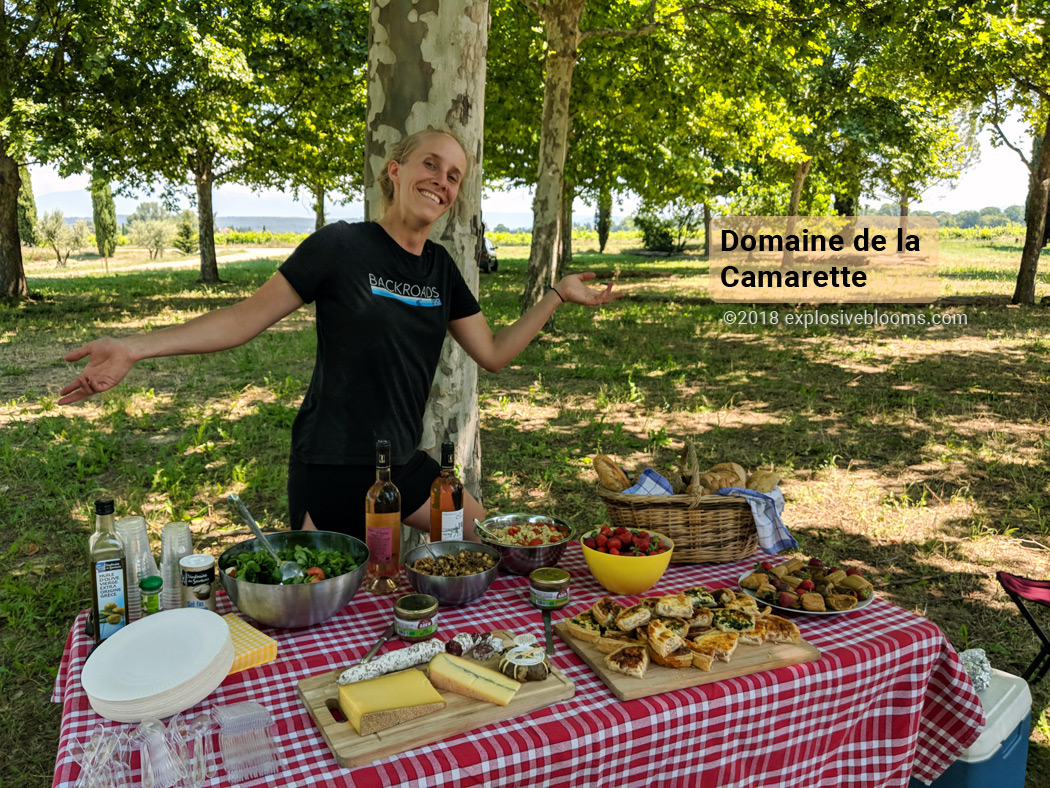 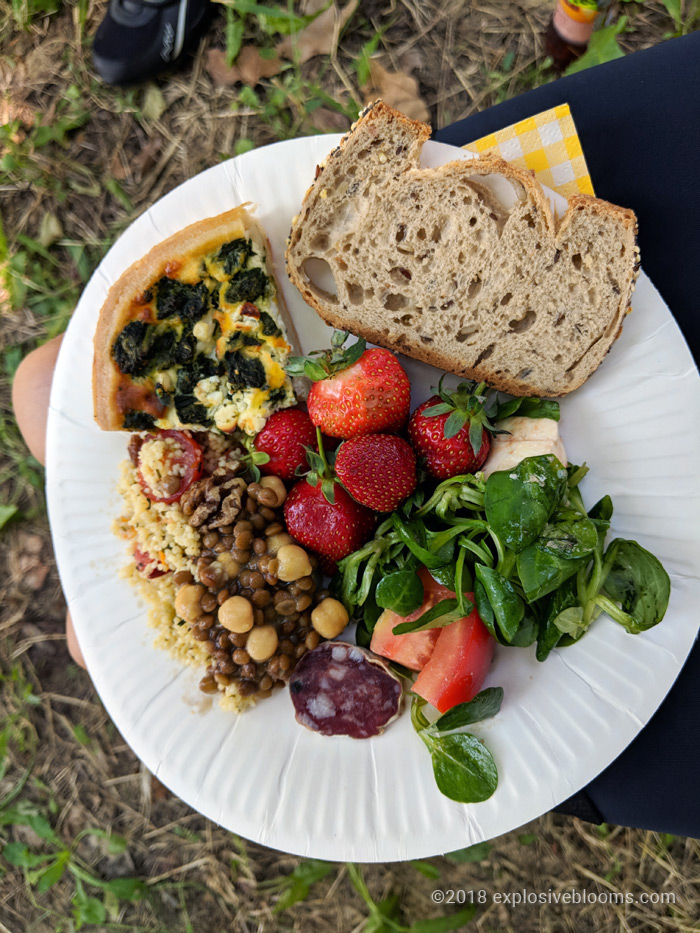 After lunch, we had some options. Hubs and I decided to skip the two optional loops, which could have added between 9-30 extra kilometres. As you’ve heard many times now, it’s hot in southern France at this time of year, and especially between 1-3 pm. A few others were thinking about tackling one or both of the loops. Hubs really wanted this to be his rest day, before the big day 5 climb. We enjoyed our 16 km ride to the hotel.

From towns back to fields, I couldn’t resist stopping for a photo of vineyards and Mont Ventoux in the background. 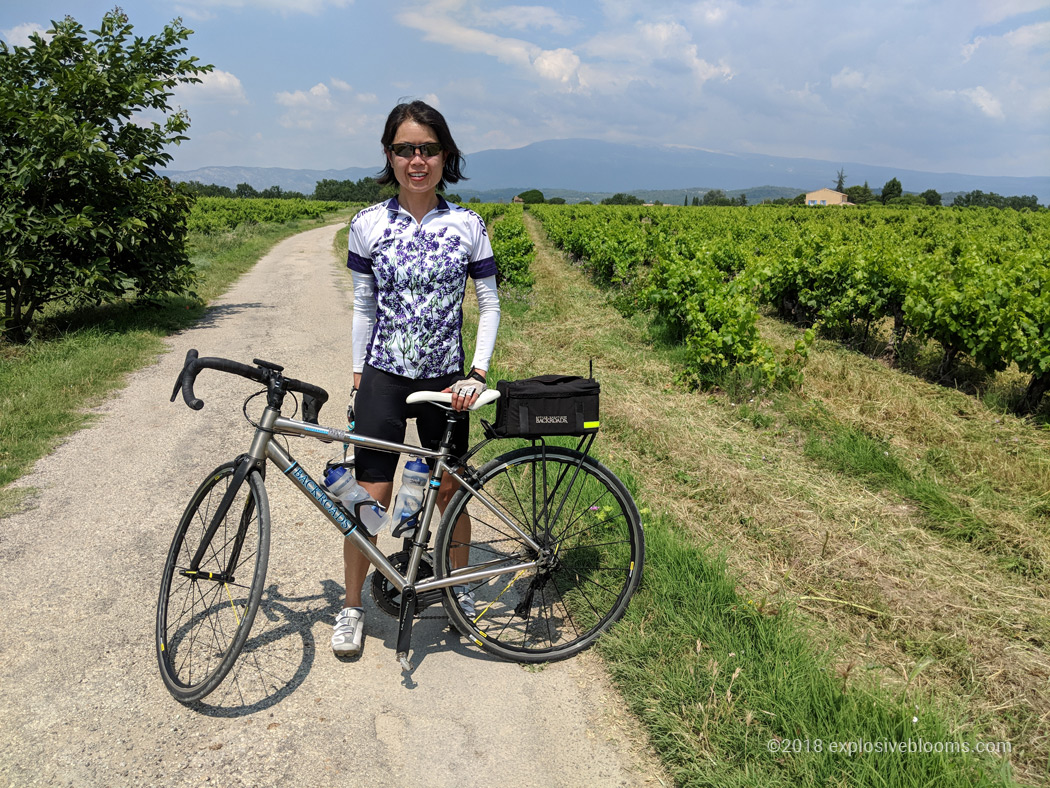 Our hotel room was very big! So far all the accommodations have been great, this one included, but this one does not make taking a shower very easy. In fact, it doesn’t have a proper shower, which I will get to. First, this layout is one of the strangest I’ve seen, with a window peering into the bathroom (no toilet in this room, that’s down the hall). The bathroom is where you’ll find the bathtub and sink. 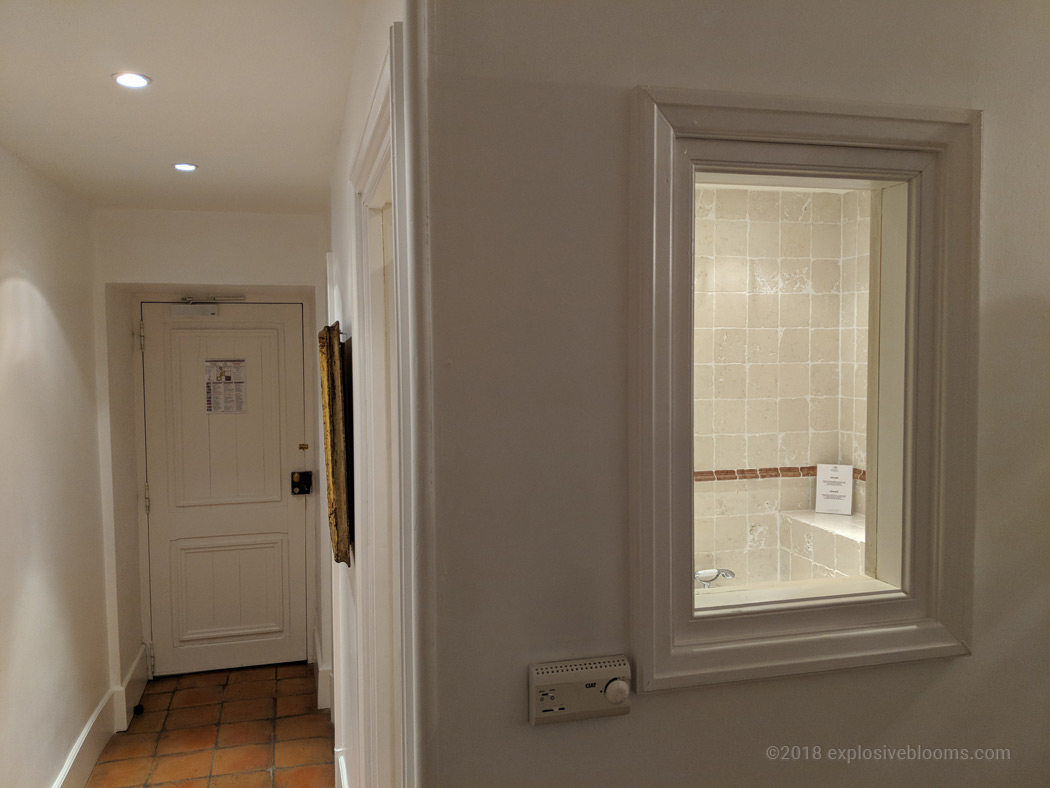 As luxurious as a bath could be, when I’m covered in sweat and sunscreen and dust, I just want to scrub down real good, and that requires a proper shower. Nothing like that was happening here, but I made do. 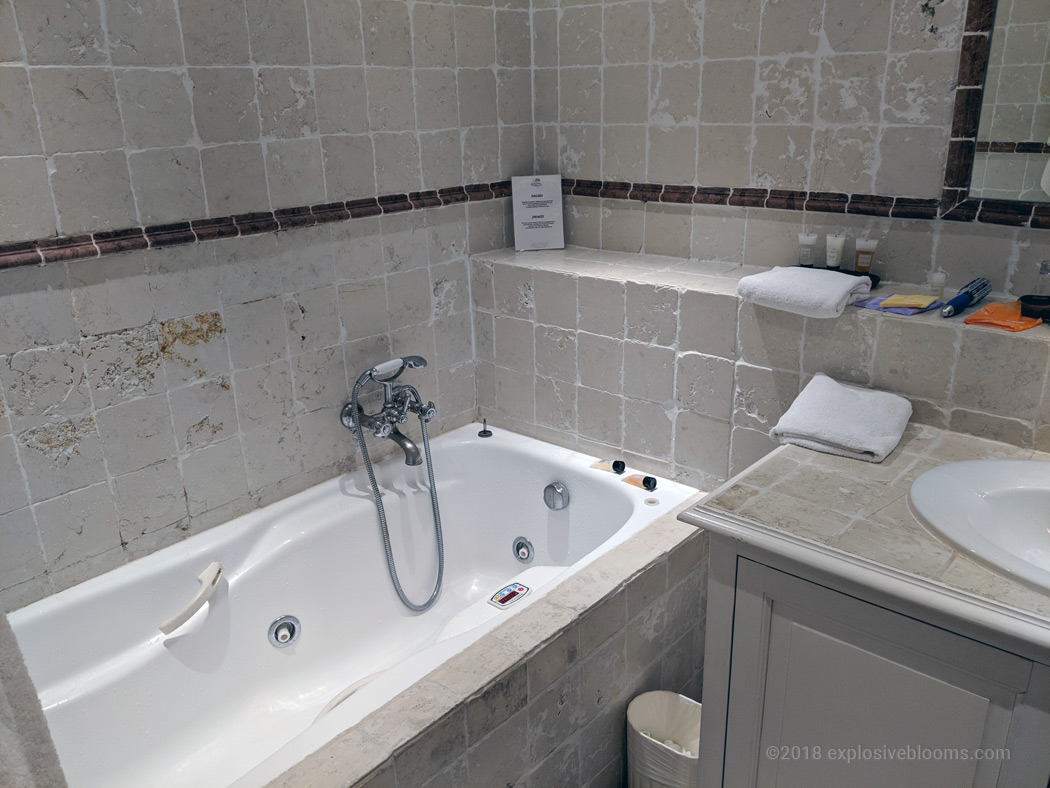 I did enjoy all the art hanging in our room. I found myself staring at this piece often. 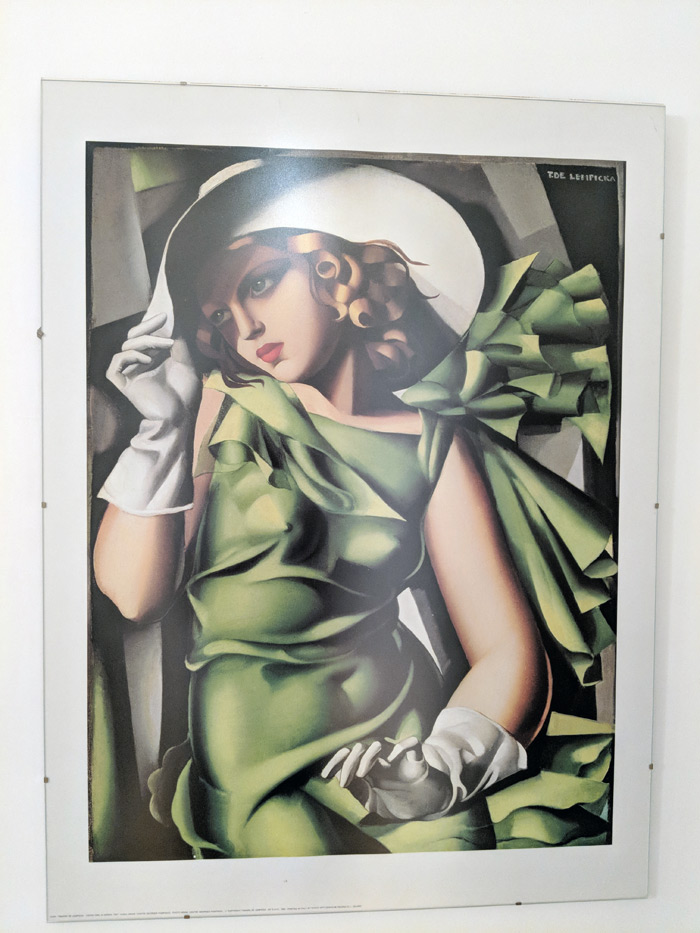 Dinner was satisfying, and talks at our table were focused on tomorrow’s ride. It looks like there will be 5-6 of the guys doing the epic climb. I’m really looking forward to the gorge ride. Better get some sleep now!