“Because there will be six of you, we have decided to send Francis with the support van up Mont Ventoux tomorrow.” Those words from our leader Camille should’ve eased any anxiety, but in my case, the goal was always to complete the entire 21km ascent on my own, no matter how long it would take. So as far as I was concerned nothing had changed. We finished up our dinner at Restaurant Les Remparts in beautiful Venasque, and headed back to our hotel to rest for the Day 5 climb. The alarm was set to an earlier than usual 6:45am. I had tried to convince Jaime to join me, but she wanted none of it. She opted for the scenic route through the gorge at the base of the mountain, cycling through lavender fields with a stop to taste lavender honey. I couldn’t blame her for her decision. We agreed to meet at lunch whenever I arrive and we could share stories.

The option to climb Mont Ventoux was one of the main reasons I was so looking forward to this particular Backroads trip. Prior to arriving in France, I had already read many other cyclists’ recount of the climb, the mental challenges, the physical challenges, the heat at the base, the chill at the top… I felt like I was prepared for anything. I was even prepared to forfeit the climb, as I understood there could be 100km/h winds at the summit which would make the final few kilometres much too dangerous. But luck was on our side this morning. The summer solstice arrived with almost perfect weather conditions. Clear skies and low winds, but it was still going to be hot. I’ll take it. I felt the odds were in my favour. Armed with a my usual ziploc bag of dried apricots and nuts, a Hammer gel, two full water bottles, and today, the addition of two bananas, I had everything I needed. 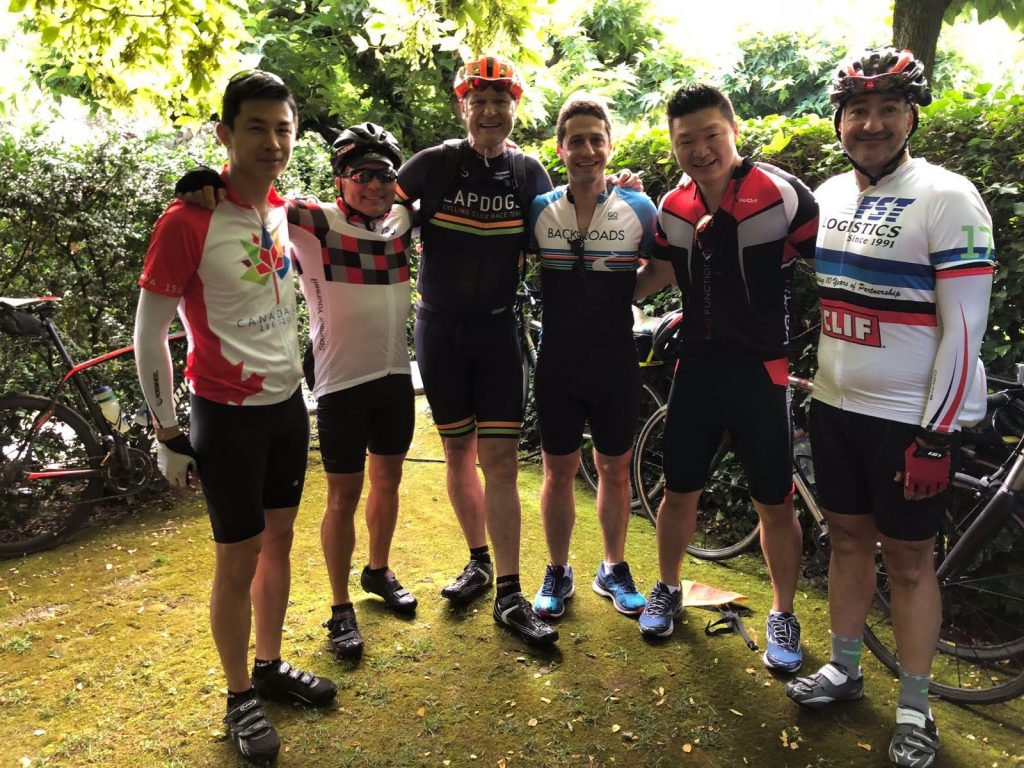 The six of us departed from le Chateau de Mazan around 8:15am. We rode as a group at an easy pace for 40 minutes to the town of Bedoin, where the unofficial start of the 21km climb begins. The elevation at Bedoin is about 300m. The top of Mont Ventoux this year is at 1909m (yes apparently it changes). The elevation profile of the climb is documented on many internet sites, so I was well aware that the first 6km is considered to be a “warm up”, with an average gradient of only about 5%.

Our group of riders stayed mostly within view of each other for this initial segment so not to burn ourselves out. At the 6km marker, the difficult climbing begins. The spread in the group started to widen, and I found myself riding with only two others. Forty minutes in, we took our first break. It was early enough that we were still partially shaded by the tall trees lining the road. I sent a quick text to Jaime to let her know of my progress. To prevent my leg muscles from seizing up, I was back on the bike immediately after finishing my banana. The next 9km is arguably the most difficult segment of the climb. The road weaves through the forest with continuous gradients of 9-10% and no views of the peak. Looking down at the Garmin and seeing a speed of just 6.0km/h, barely faster than walking pace, is not very encouraging. But I just had to keep pushing the pedals, knowing that I was still more than two hours from the top.

At some point during this section, I had broken away from the other two riders and was now solo. For me and likely many others tackling this mountain, the climb is not a social activity. This is a personal challenge, both mentally and physically. I had my second break at around the 11km marker. Another text message sent, and half a banana later I was back on the bike. I won’t lie, progress was slow, but I was feeling confident and still had plenty of energy. I admit though many times throughout the morning, despite knowing that my bike was already in the lowest gear, I still pressed the Di2 gear shifter “just in case” there really was one more gear left on the cassette. It never worked.

Passing the 14km marker, the gradient begins to level off a bit, and the forest gets noticeably thinner. Rounding the turn at 14.5km, I could see in the distance the Chalet Reynard. For many cyclists, reaching the Chalet invokes new energy as it marks the beginning of the final segment to the summit. 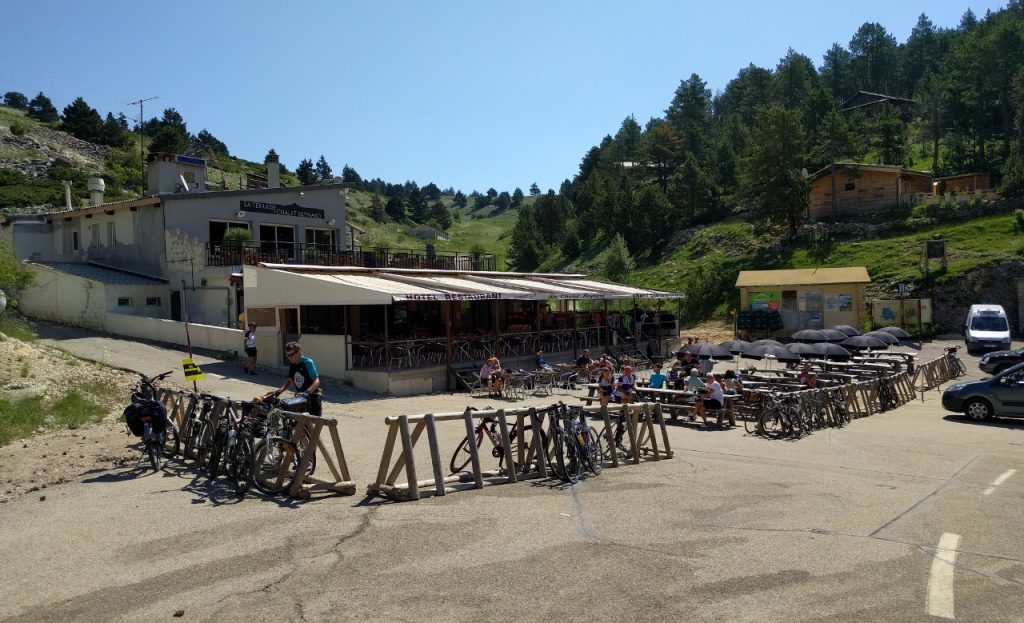 Chalet Reynard, 6km from the summit

Francis was waiting at the Chalet parking lot and I stopped for a quick break, finishing the second half of my second banana, and then the Hammer energy gel that I had brought from home. I refused water top-up as I still had plenty left and didn’t want to take on the added weight. I learned that in our group of six, I was second to arrive at the Chalet, and that I had about a 2km lead on the people behind me. I felt like I could ease up a bit now for the final 6km. From the Chalet onward, the road up Mont Ventoux enters a completely different terrain, often described as a desert moonscape. 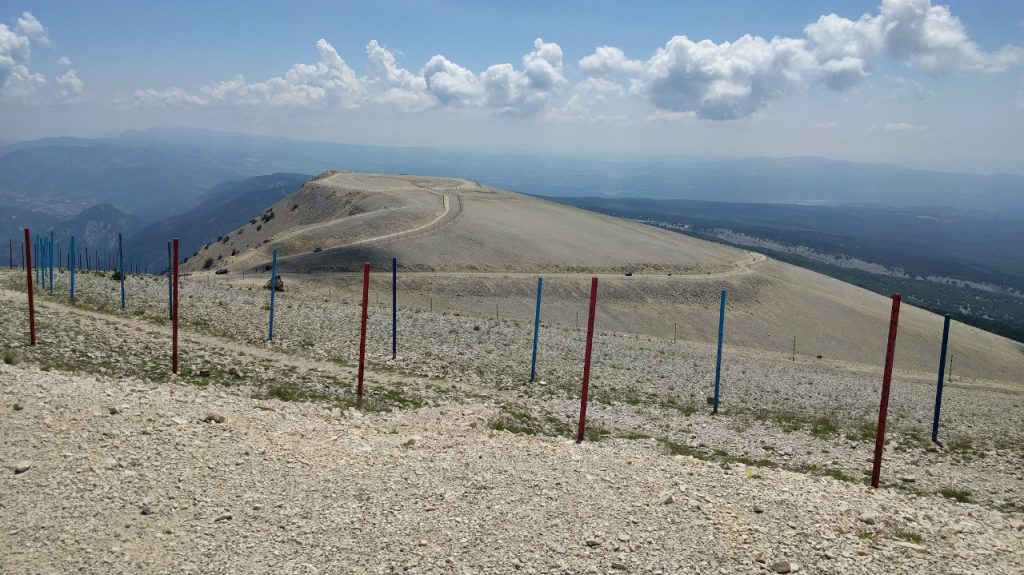 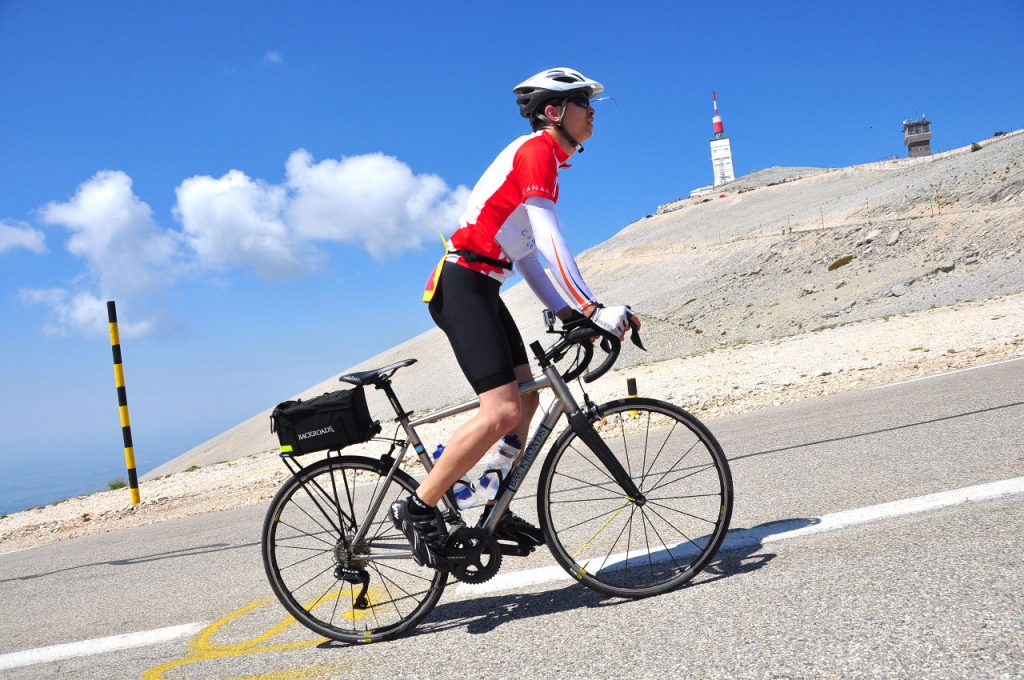 The views from here are magnificent. Looking down you see the expansive Provence countryside. Up ahead, the iconic communications tower beckons riders towards the summit. We were fortunate that there were virtually no winds on this day so extra layers of clothing were completely unnecessary. I pushed on knowing I had just one more hour before I would reach the top, but I did stop a lot more along the final stretch to really take in the views.

Just past noon, I finally arrived at the summit. The legs were tired, but the climb was completely worth it. Three other members in my group were already at the top. One had passed me about 1km from the top when I stopped for some photos, and I also learned that another, surrendering to back pain, had been picked up by Francis a couple kilometres before the Chalet. We hung around for a bit, visited the gift shop, snacked on fruit and chips courtesy of the support van, and the fifth person from our group arrived. 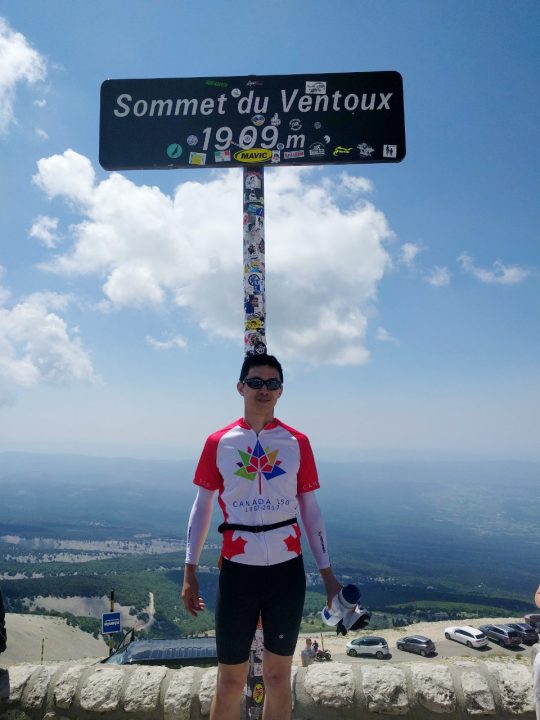 Looking over the west towards the Alps

One more left… where is he? Knowing we still had to ride one hour to the town where we will be having lunch, we couldn’t wait any longer, so we started descending the mountain. We would later learn that he did eventually make it all the way about an hour behind us. Except for the first 6km of the descent through the moonscape terrain, most of the ride down was a gentle cruise through the forest and eventually past lavender fields as we approached the town of Sault.

The final kilometre uphill into the town felt like an eternity, but I made it, running on empty and ready to refuel. Jaime’s timing was perfect, she arrived into town about 5 minutes after I did. I guess she was receiving my texts, and paced her ride accordingly, stopping lots and taking lots of photos. Our leader Elsa told us the afternoon route is one of her favourites, but given my exhausted legs from the 5hr morning ride and the Provencal midday heat, it was an easy decision to call it a day.

We enjoyed chopped steaks and beer on the La Promenade patio, which was a perfect end to an epic morning. 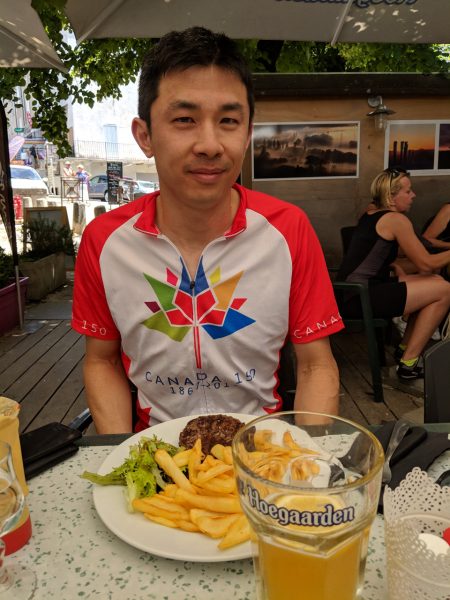 And here I am after lunch: 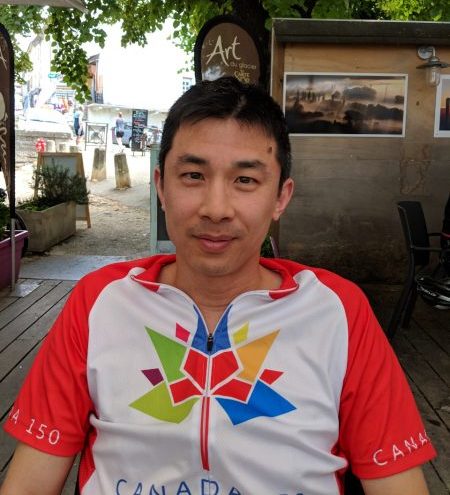 Yes, that is a fly on my face, but I don’t care… I just climbed the Giant of Provence. 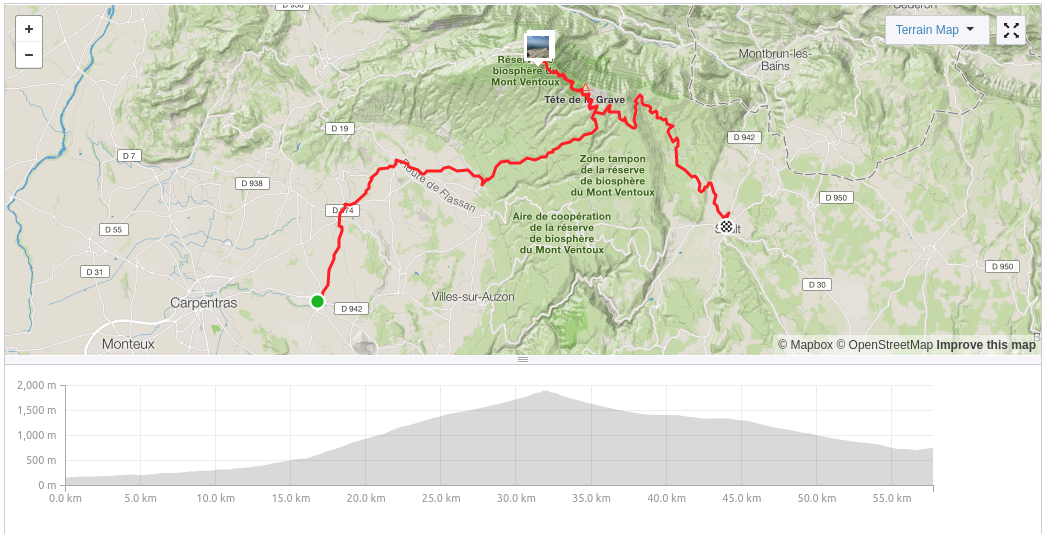