The alarm went off early this morning, but that was for hubs. Today is THE DAY. It’s the day that some of the guys have been talking about since day 1. For six of the guys, today is Mont Ventoux day. Given how hot it can get as the day progresses, the guys were starting their climb at 8:00 am. For the rest of us, it was the usual 8:45 am start.

I was a little nervous this morning as I was setting up my bike. This was the first time on any of our trips that I have been on my own (without hubs). With the introduction of the Garmin GPS devices, I do feel much more confident than back in the day when we only had the paper directions. I also knew that there were other riders in our group that would be around, as long as I wasn’t the last one. Camille and Elsa both told me that the Gorges de la Nesque ride was their favourite of the trip, as the landscape is so incredible. They also got me excited about the honey tasting and the wild pig at the top of the climb. I wanted to be sure that hubs didn’t miss anything, so I made a point to stop often and take photos, though I found it quite difficult to take really good photos that fairly depict that grandness of the gorge (as in, I needed a really wide angle). It’s tricky in photos to also accurately show how the depth of the canyon – I honestly don’t think any of my photos provided any of these details, but it was incredible and I’m glad I was there.

The Nesque is a small river, often dry in summer. It bypasses the Mont Ventoux in the south-east and cuts deeply into the Vaucluse Plateau between the villages of Monieux and Méthamis.

The climb was long but gradual, and this route is popular with cyclists as there were so many going in both directions. Although it was full sun, I felt good and strong and kept a good pace. 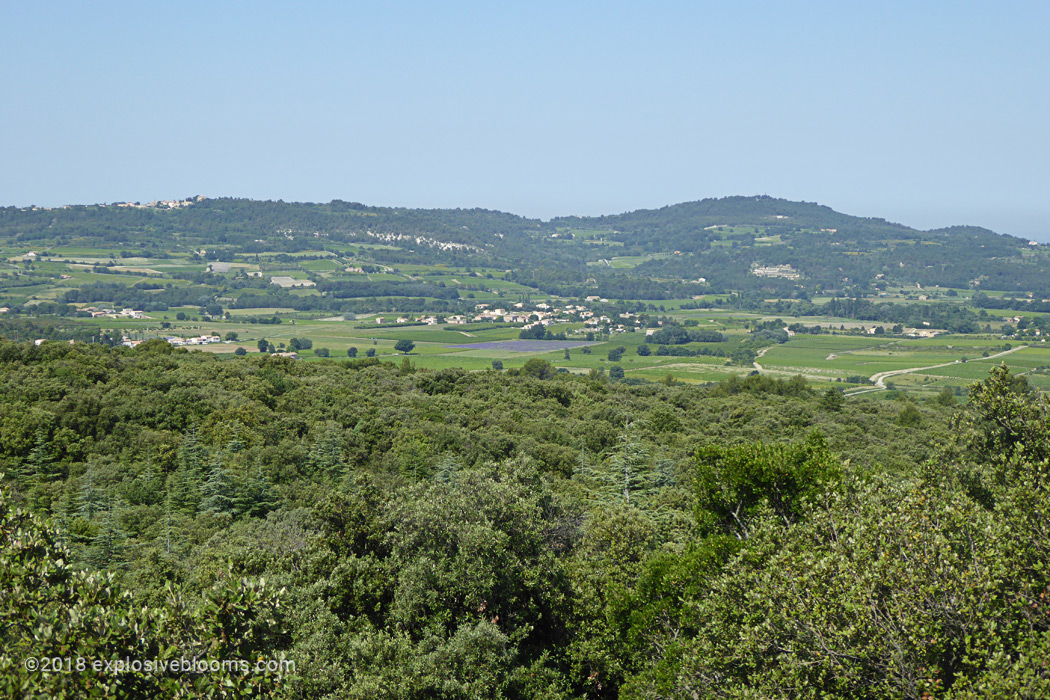 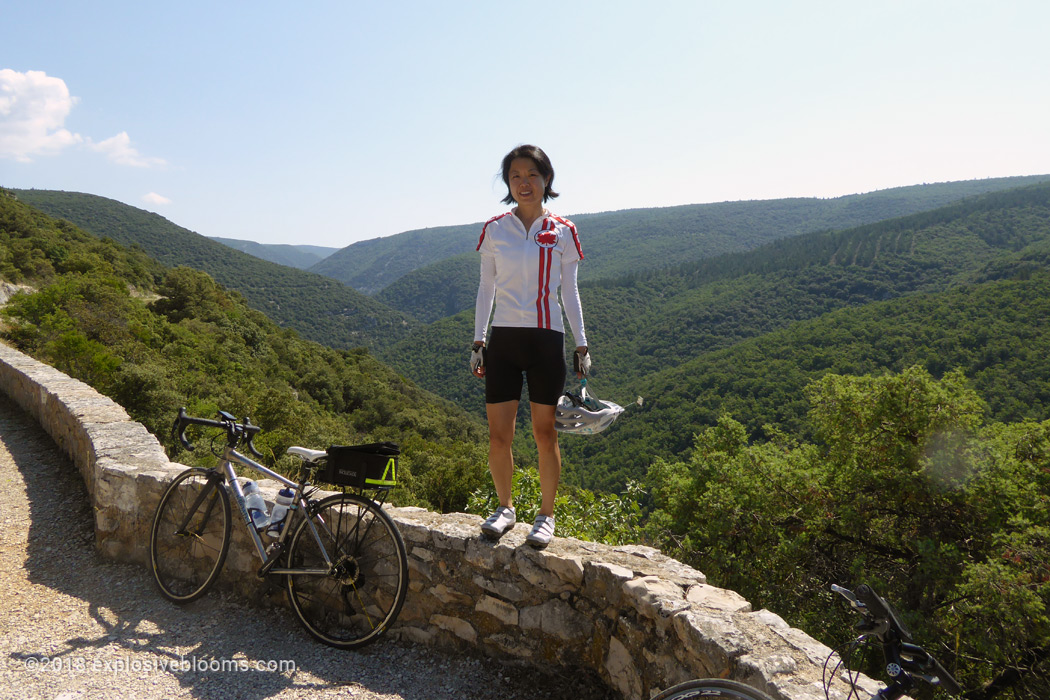 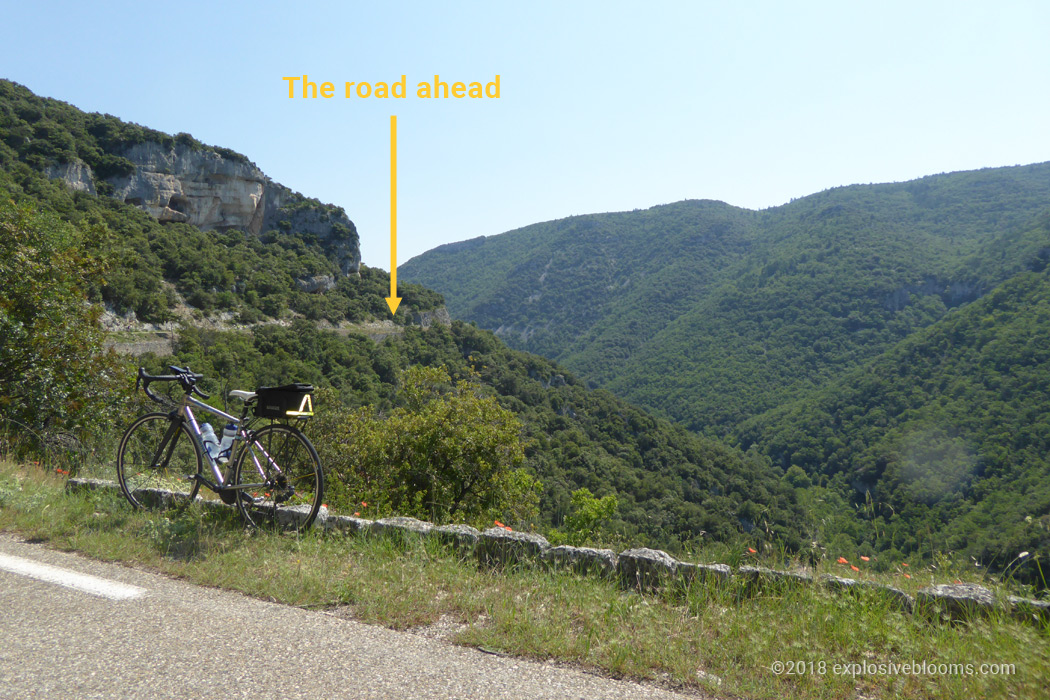 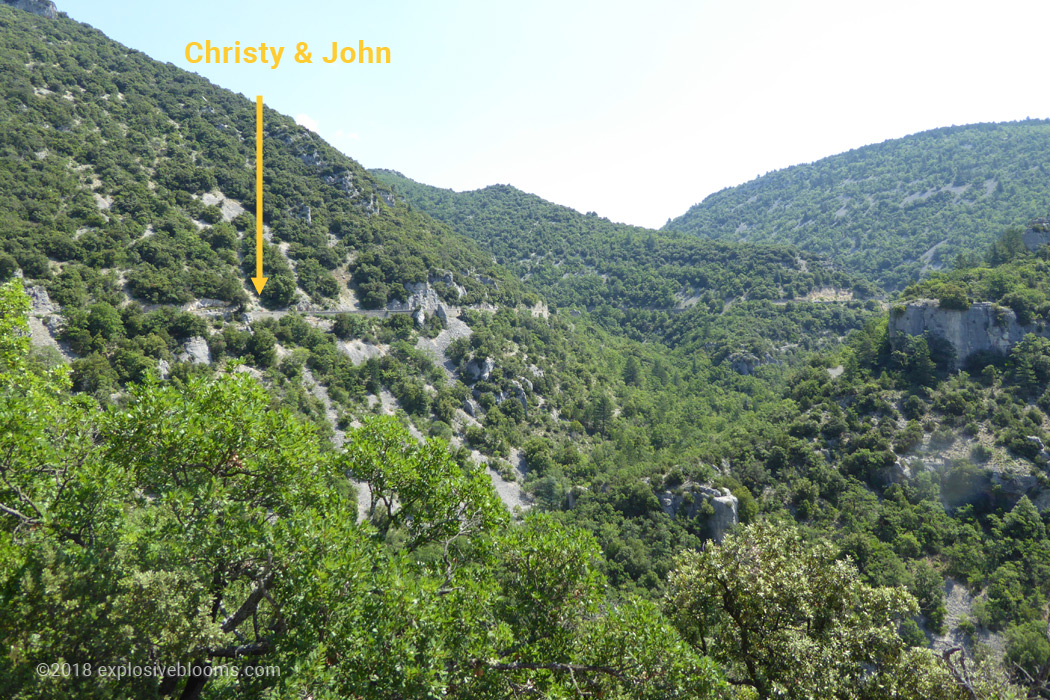 I finally reached the honey stop, which turns out to be a roadside stand, that feels like it’s built into the rock face. It’s not situated at the best spot, as it’s at a turn in the road, so watch out for car and bike traffic. As I approached, Camille stood in the road and was waving his arms wildly (making fun of me because I missed the coffee stop the day before and said he wasn’t there to flag me down). It was a long climb to that spot and I guess my legs and brain were a little fogged because I unclipped my right foot and fell left. I was totally fine, a little embarrassed, but I wasn’t physically injured (or so I thought). Elsa ran up immediately, concerned, but I reassured her I was totally fine while she’s pointing to my bleeding knee and ankle. I cleaned up the cuts and applied bandaids as we waited for the honey lady to give us the talk and tasting. 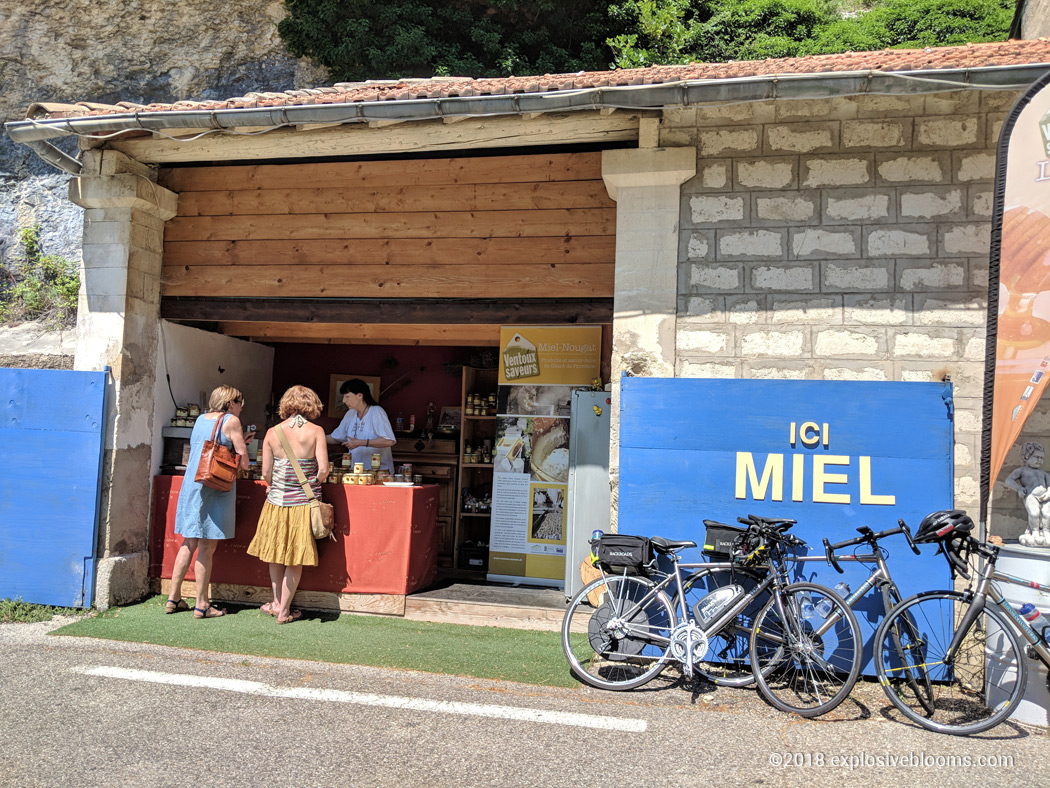 We waited a long time as they were servicing two other customers, and during that time I had received a text from hubs to let me know he’d made it to the chalet. He was making good time! (Side note: Fido has this asinine policy of automatically charging customers $12/day when you text, talk, or use data. I’m no longer with Fido). 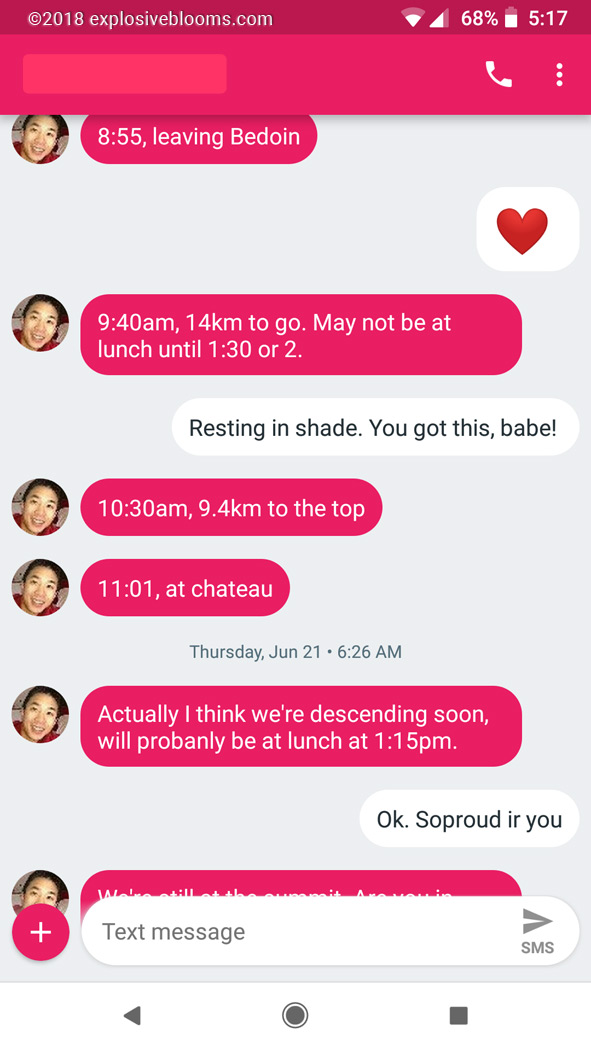 Twenty minutes later, we finally got to sample five of her honeys. After purchasing some lavender honey (we’re in Provence!), I got back on my bike and continued the last section of the climb. 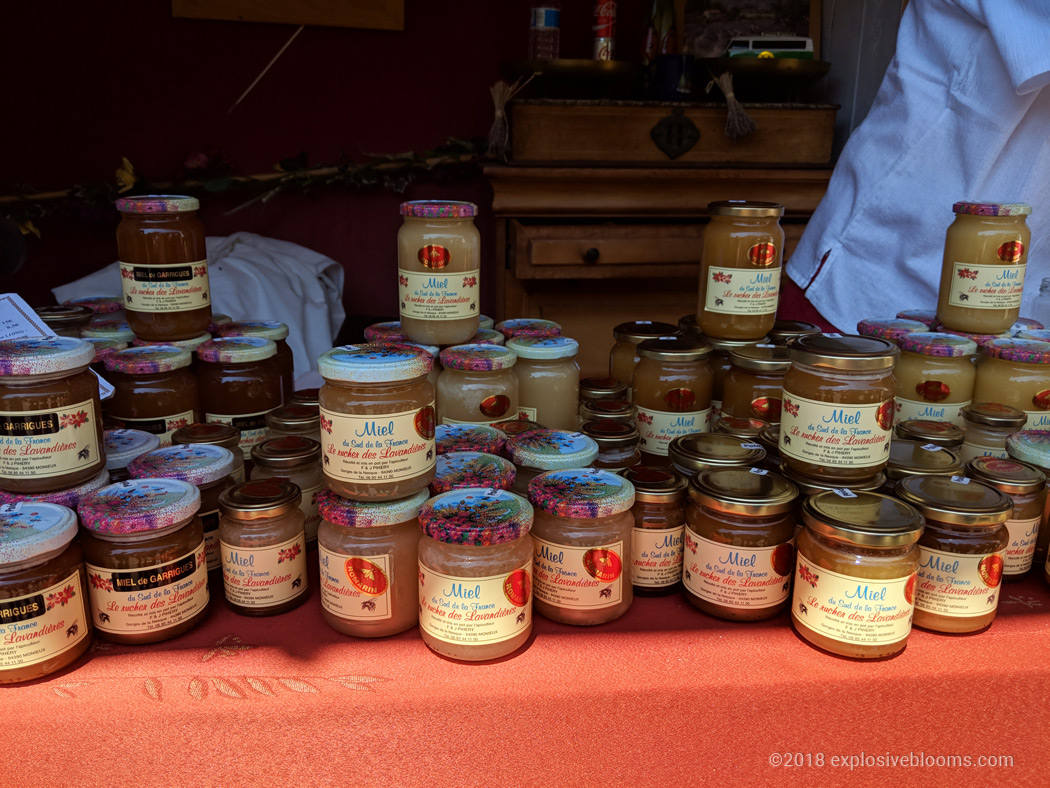 Based on photo timestamps, hubs had reached the summit at about this time. After climbing further and through a tunnel or two, I finally reached the Castellaras Belvedere, which provides 360-panorama views with an especially amazing view of Ventoux. The belvedere also faces Rocher du Cire (Rock of Wax). This is the spot where I met Billy (?) the pig farmer. He’s a strange but harmless man. Unfortunately Fleur, his famous boar, was nowhere to be seen that day. 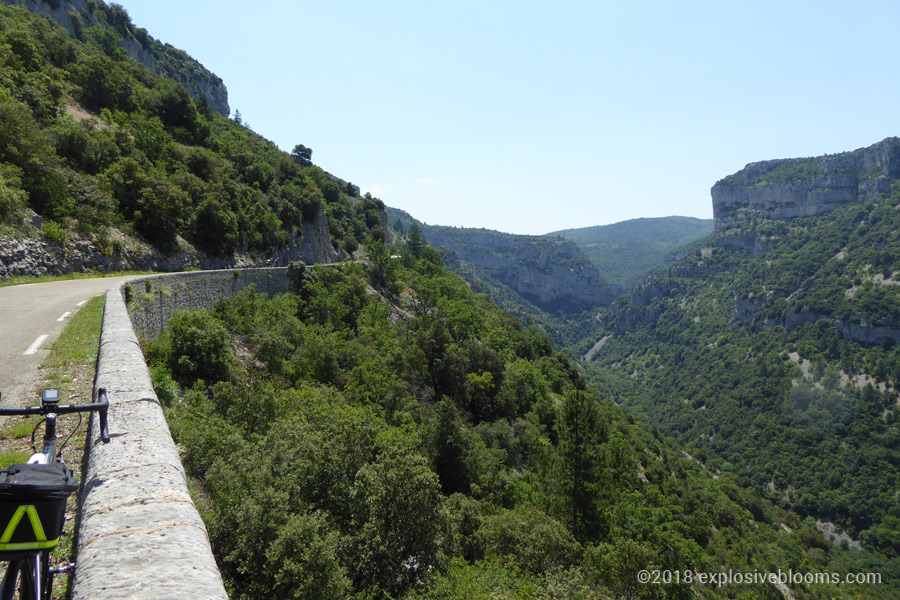 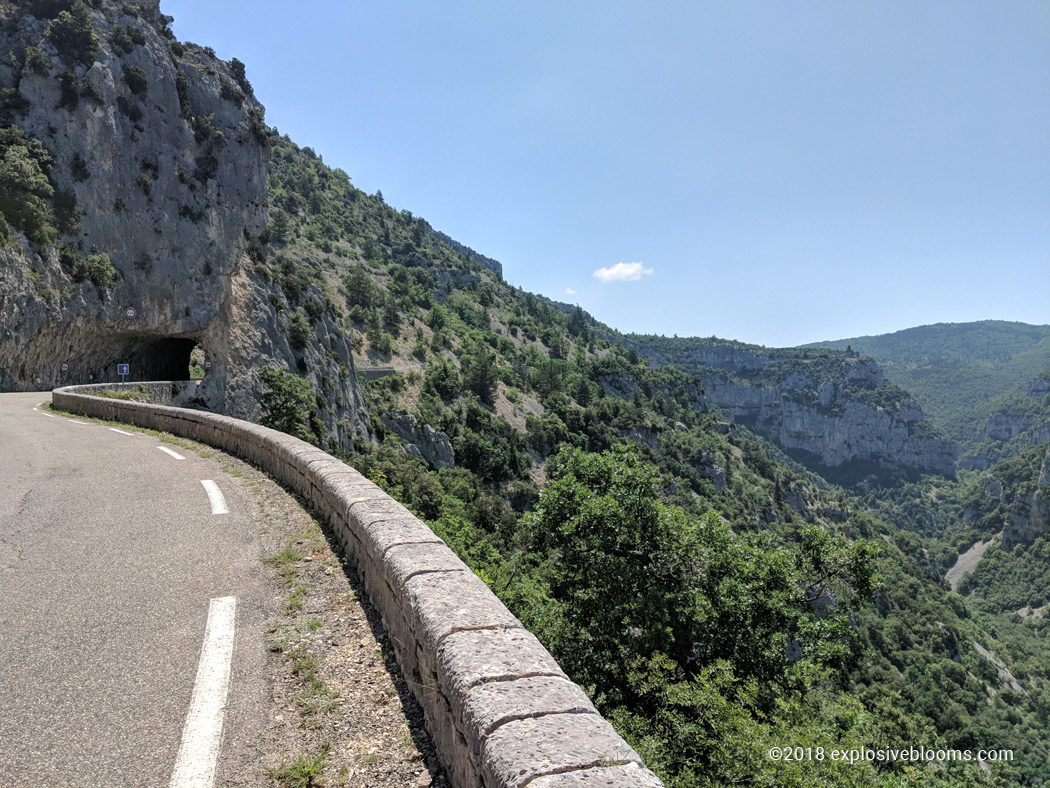 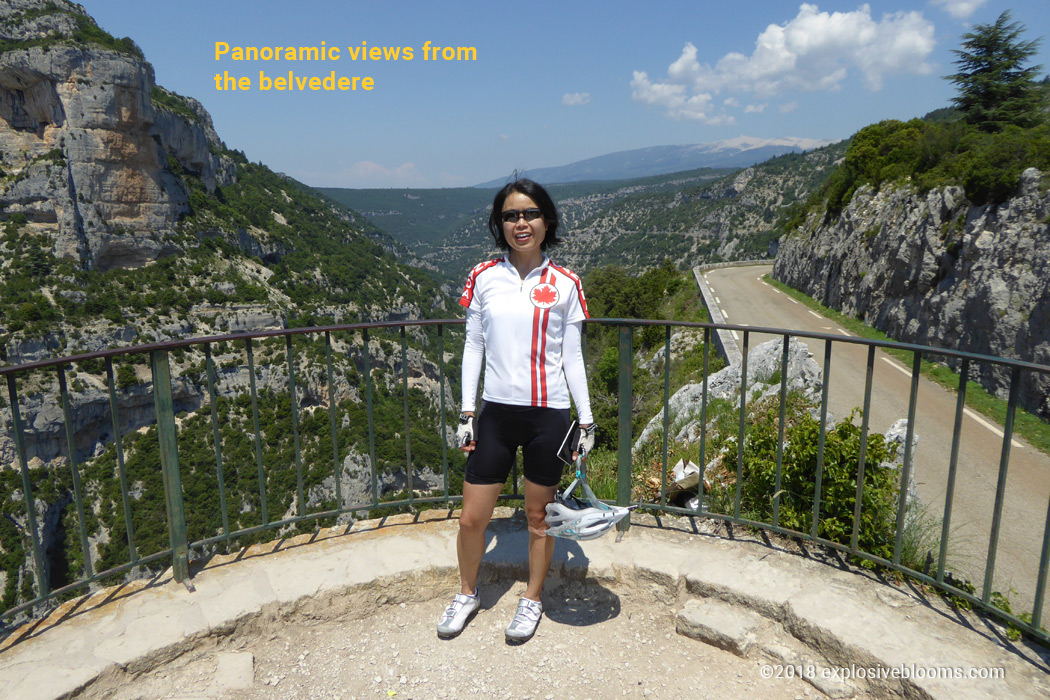 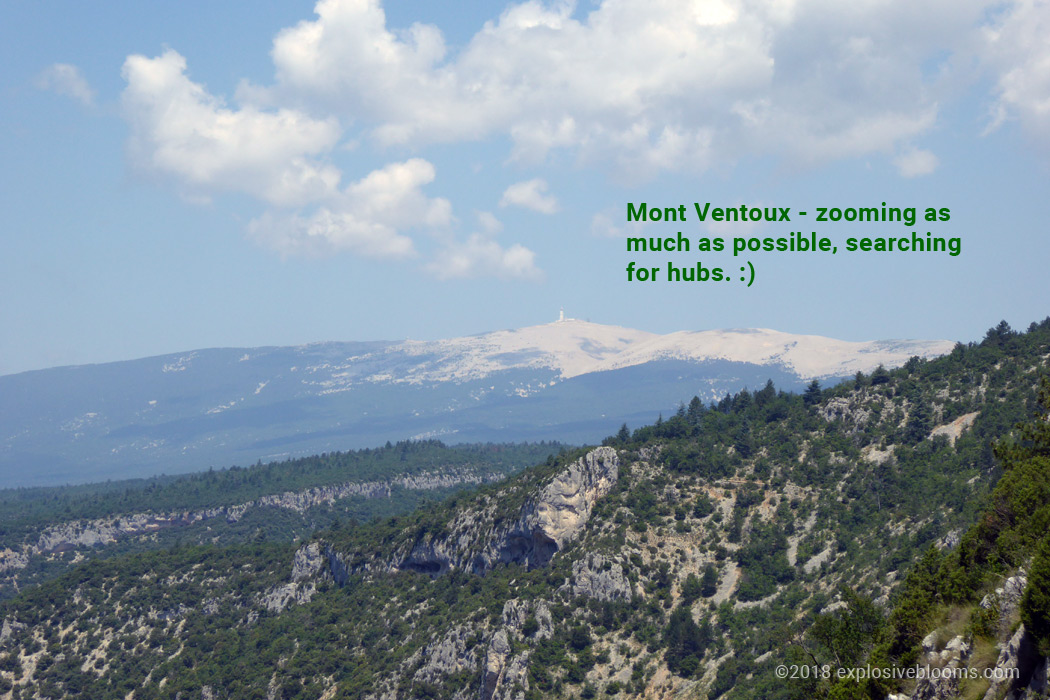 From this point, it was downhill for a while, into what felt like the valley of lavender fields. It’s not difficult to imagine what this area would look like in full bloom. It took me a while to actually ride through this short section as I pretty much stopped every 100 m or so to take photos. 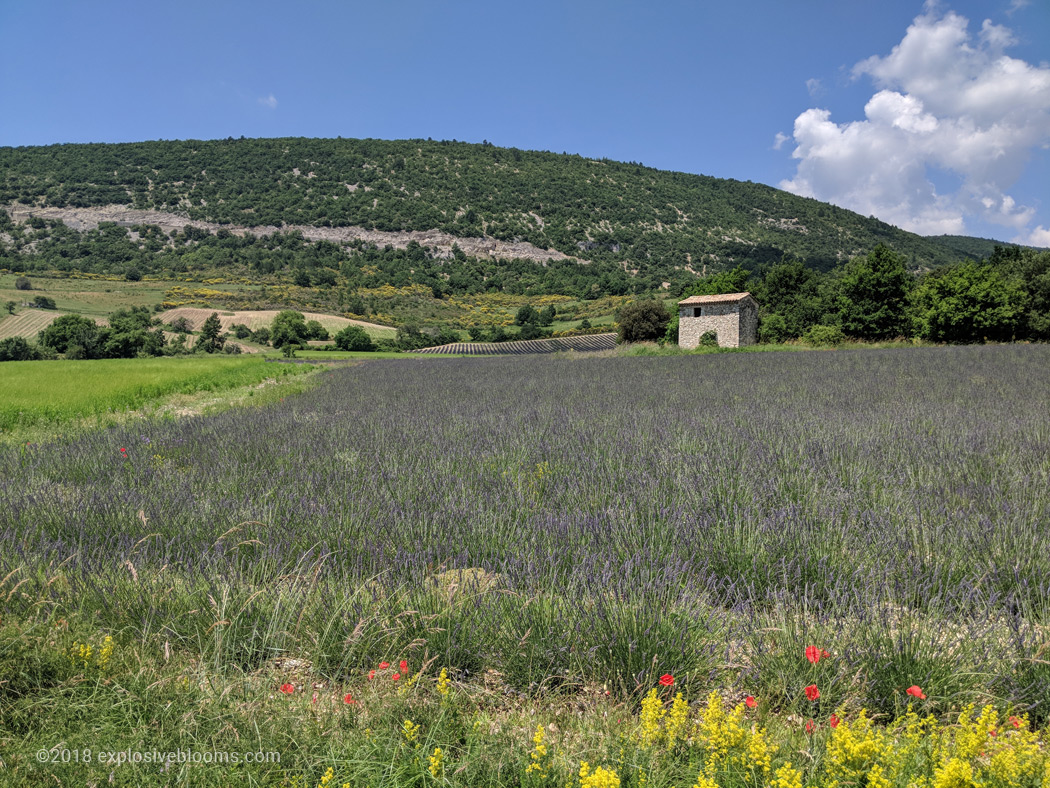 And when I finally passed the dotted purple fields, I noticed a town perched higher up and I knew that had to be Sault. 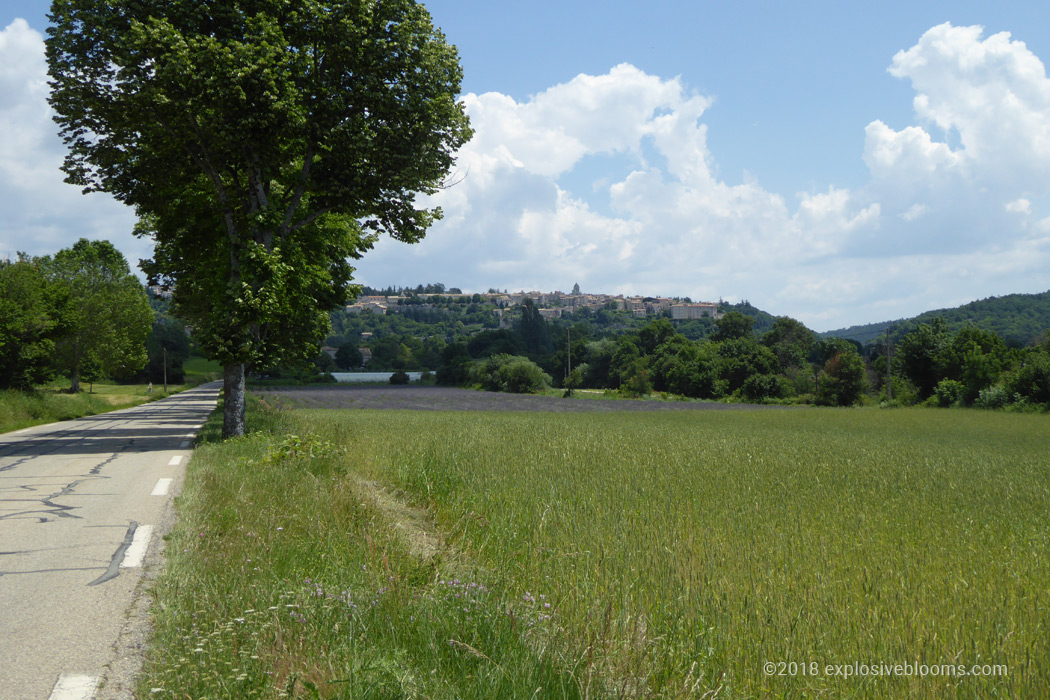 We have definitely had to work for our lunches! There was on steep section right at the end to get to lunch, but my mind wasn’t on the food. I saw hubs sitting on a bench by the vans and I was thrilled to see him. My heart was swelling with pride. He did it – he climbed the giant of Provence!

Although I was game to ride more after lunch, hubs was exhausted. I didn’t want to ride without him, so we hopped in the van with Camille and headed to our hotel. Hubs will write a post about his experience climbing Mt. Ventoux. Before I sign off, here’s a recap of my fantastic morning.