Bonjour! Hubs and I are sitting in our little “studio” in Avignon, France. We are spending two nights at Aux Augustins, within the walls of the city. It is such a lovely town, and the weather is absolutely perfect – hot during the day and sweater-appropriate in the evenings.

We departed Canada yesterday (Thursday) evening after work on the red-eye. I’m not a huge fan of these flights as I am very tired on the flight, but am unable to get restful sleep. I’ve always suspected that the airplane seats don’t stay reclined for me, and I’ve been reassured that I’m not crazy. I noticed the woman in front of me would always have to recline her seat because it would slowly bring itself to upright. Maybe I’m just not heavy enough to keep the seat reclined. Nevertheless, sleeping upright is truly uncomfortable. The first leg of our journey was a 5h20 flight to Reykjavik, Iceland. We departed on time, arriving at the unthinkable hour of 2:10 am (6:10 am local time, still an unthinkable hour). We de-planed and were ushered onto a shuttle bus, so we had our first taste of Icelandic summer weather – a balmy 6-degree Celcius and overcast! We picked up creamy, delicious Icelandic skyr at one of the cafes at the airport, and made our way down to our gate to catch the next flight (which required a shuttle to the plane).

The layover was nice and short. Iceland Air does a fantastic job of providing short layovers. We were now heading to Paris! We boarded on time, but due to a few late passengers and possibly some other air traffic delays, we took off about 20 minutes late. I can’t say for sure because I passed out while we were on the tarmac. On this flight, I smartened up and asked for a blanket. Feeling warm and cozy does help with sleep. I was quite chilled on the previous flight.

One thing that really stood out about both Iceland Air flights was how easy and pleasant the boarding process was. On almost all other flights (e.g. Air Canada, Cathay Pacific, and South American flights), the boarding process is pushy and confusing. People are clogging the lines as they jockey for position closest to the check-in lines. On the Iceland Air flights, everyone remains seated until their boarding rows are announced, and there isn’t a mad dash, with people pushing their way to the front of the line with no regard for others. The process today was civilized, as it should be. I wish all boarding experiences were exactly like what I got to experience today (yesterday?). The flight to Paris was a bearable three-hour, uneventful flight. We landed to a sunny, 21-degree Celsius day! We picked up our luggage and caught an airport taxi to the train station downtown (Lyon Station). It’s a fairly long commute, costing EUR55, but we got to ride in a comfortable and roomy hybrid vehicle that never sounded like it was even running.

I am very impressed with hubby’s French skills! Though he’s not carrying on conversations about politics, he’s able to communicate successfully with drivers. My French is quite rusty and for some reason I default to Spanish.

The train station was packed with people, with people taking up space everywhere. This is likely because of the ongoing, rolling strikes happening, but it’s controlled chaos. We purchased sandwiches at a little stand in the station before boarding, because I was starving. It was now 3:00 pm local time and I hadn’t eaten much other than fries at Pearson, and skyr in Iceland. It was a little bit stressful waiting for the boarding platform to show up on the screen. With the rolling strike, it seemed like there was only one or two trains in operation, so track numbers pretty much only became available 10 minutes before departure. We boarded on time and the train left on time. The train was excellent – spacious, comfortable, quiet, and fast! We covered 700km in 3 hours! Hubs deliberately chose seats next to the luggage rack, so that we could keep an eye on our stuff (I’d say it’s pretty safe on the trains, especially in first class). I ate my sandwich as soon as we got settled in our seats, and it was delicious! The baguette was fresh, there was just enough spread to give it flavour, but not make the bread soggy, the roasted tomatoes were packed full of flavour and the chicken chunks were not dry.

Right after eating, I did try to stay awake to admire the countryside, but lack of sleep was winning and I was out cold again.

We arrived in Avignon at around 6:20 pm. We could have caught a local train to go one stop and then take a taxi to our hotel, but we decided to head straight for the taxi stand. We didn’t realize that the taxis don’t stand around waiting – you are the one standing around waiting. We were probably waiting for 15-20 minutes before a cab arrived, taking us to our current location. It’s a small hotel with a very homey feel. Our room is on the ground floor, facing inwards toward the shared courtyard. Although the room is small, it is functional, with the cutest kitchenette in a cupboard. 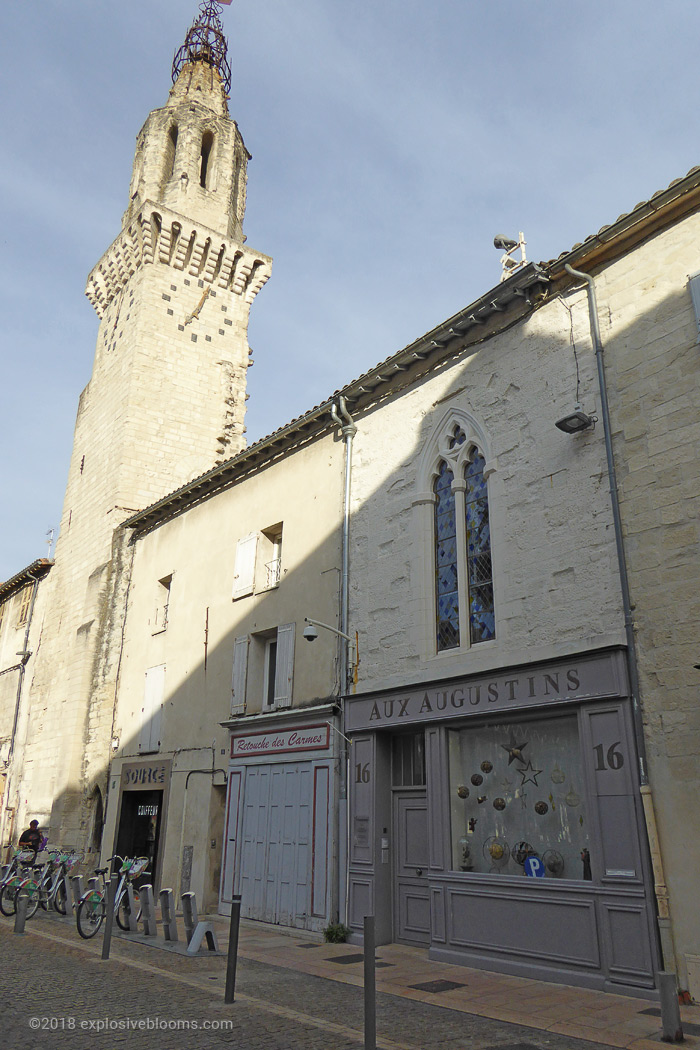 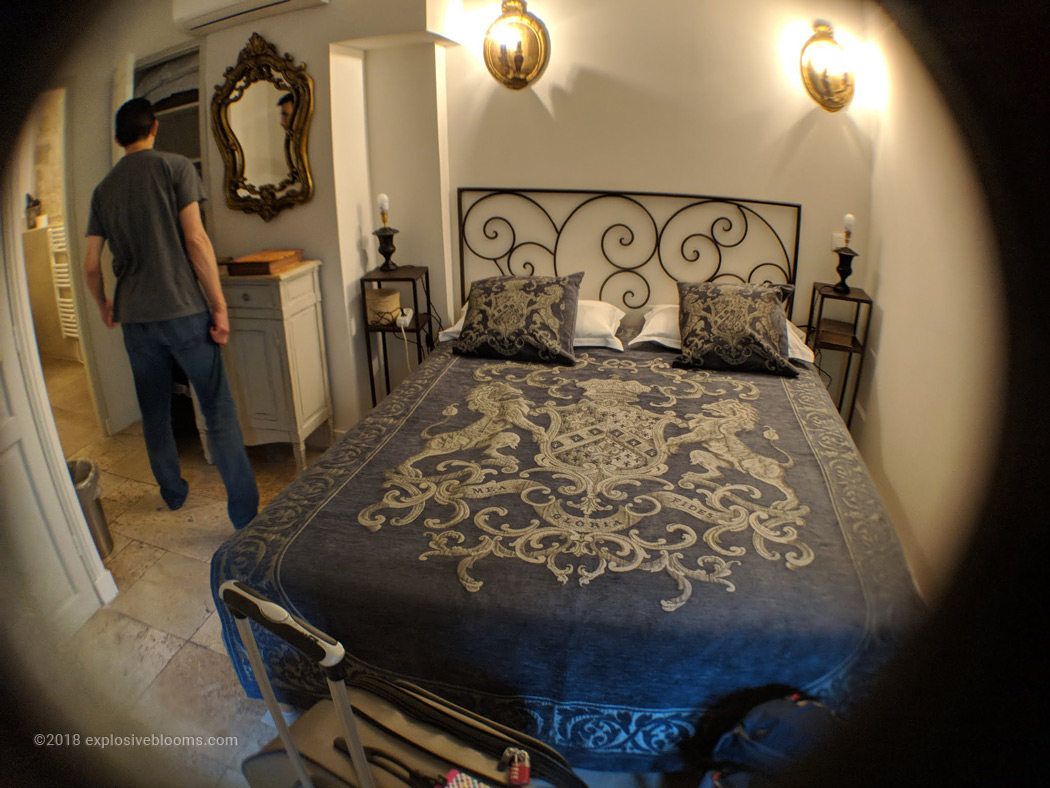 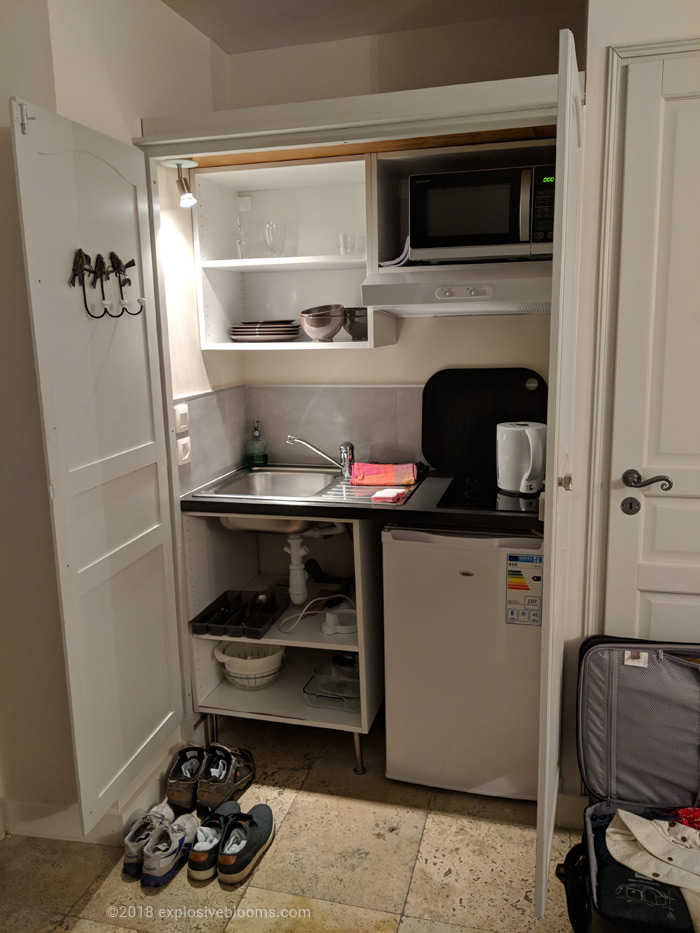 How did I find this gem? Just a Google search for places that weren’t in the highest price range with good reviews. They also had a promotion to save €20 by booking directly.

After unpacking and freshening up, it was almost 8:00 pm and we were famished. Our hotel is conveniently located near many restaurants. We found a place with decent ratings, just steps from our location. The street just in front of our building’s main entrance has this lovely pedestrian “island”, which actually acts as the “patio” for all the restaurants that line the street. It is lovely and lined with beautiful sycamore trees. As we were waiting for our food on the “patio”, I realized how charming this town is. 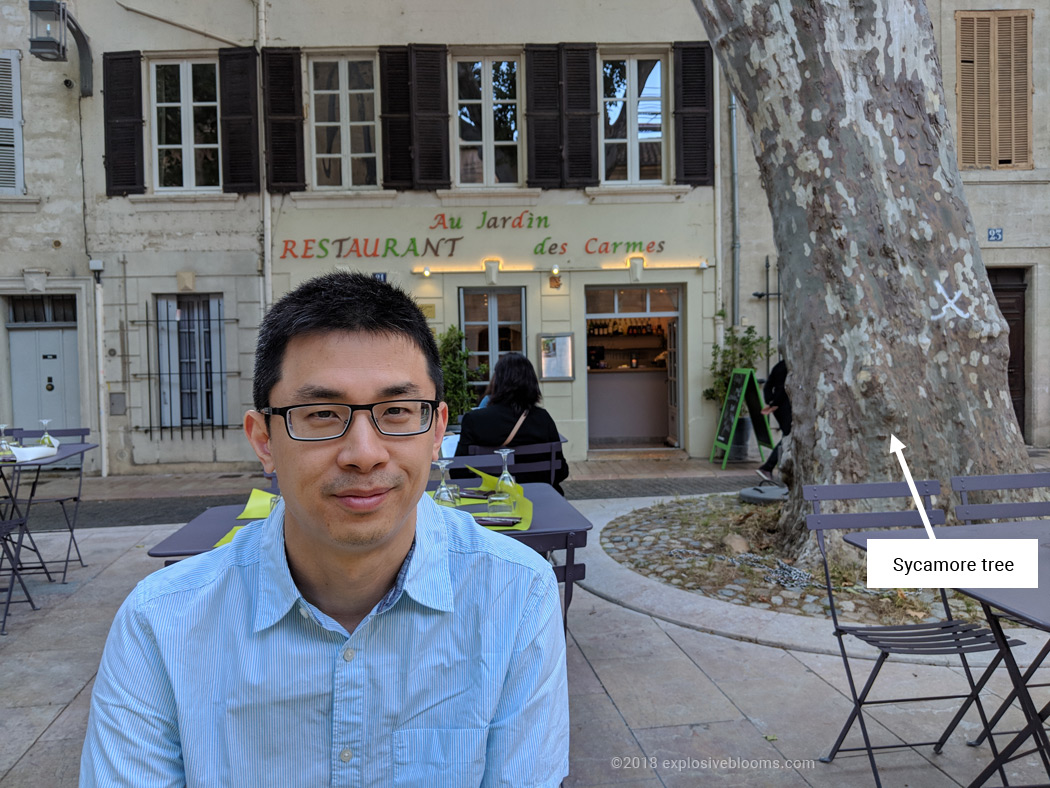 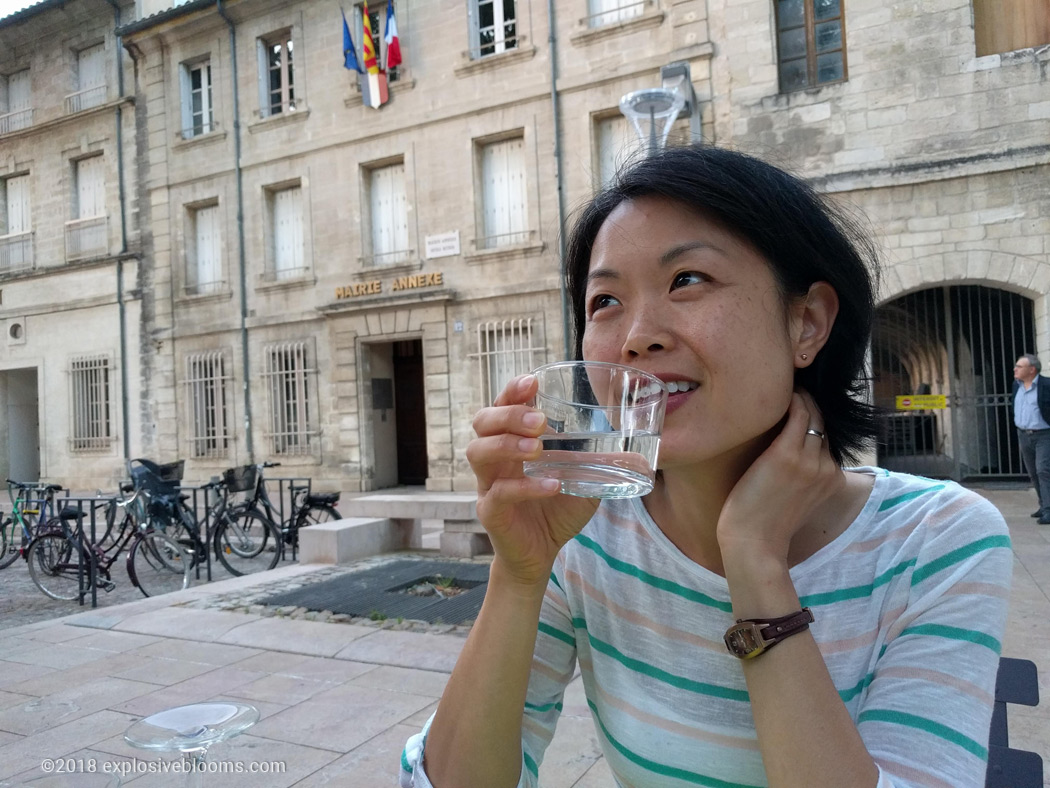 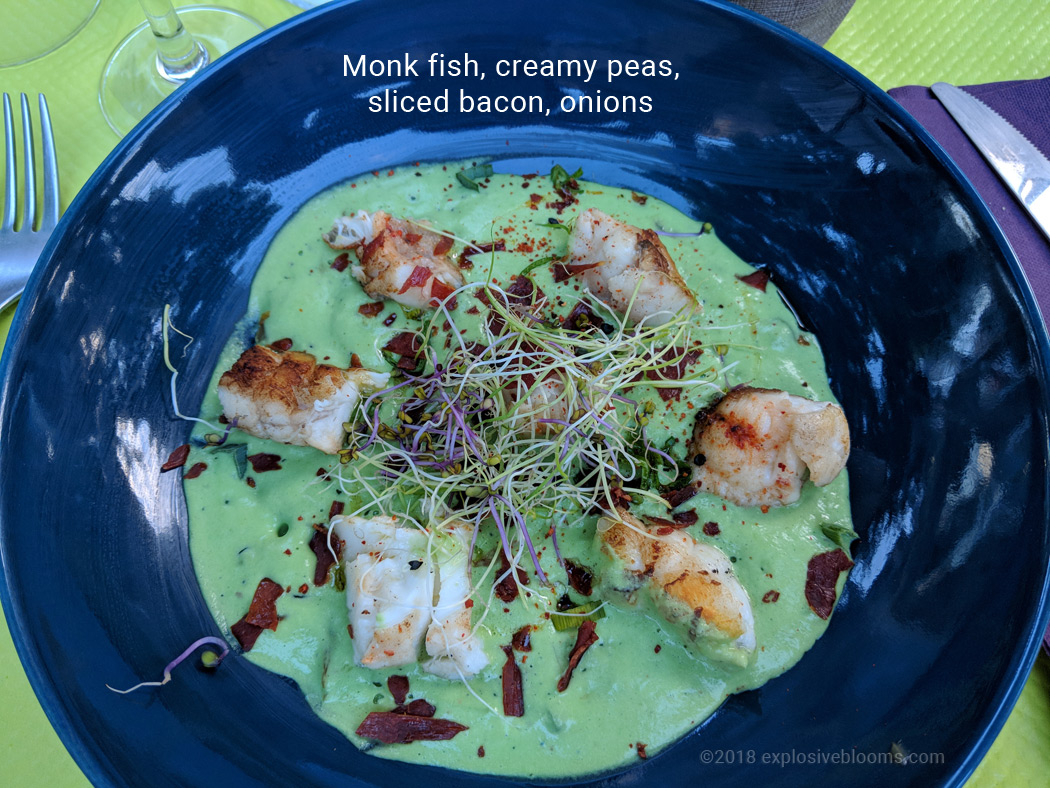 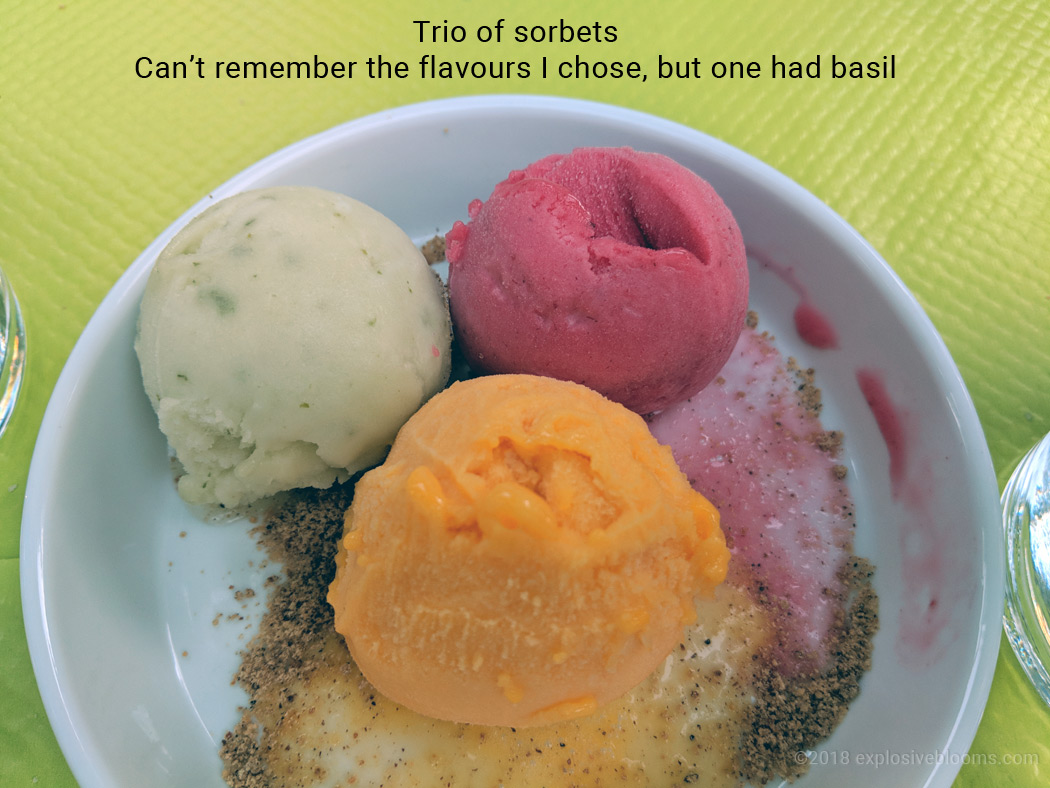 The dinner was delicious, though I’m actually hungry again. This is not unusual after a long journey. Even with the espresso to cap off my evening, I can safely say that exhaustion beats hunger right now. After our espresso, we walked around town, down beautiful cobbled roads and along the water to see Avignon Bridge by night, before returning to the walled city centre. 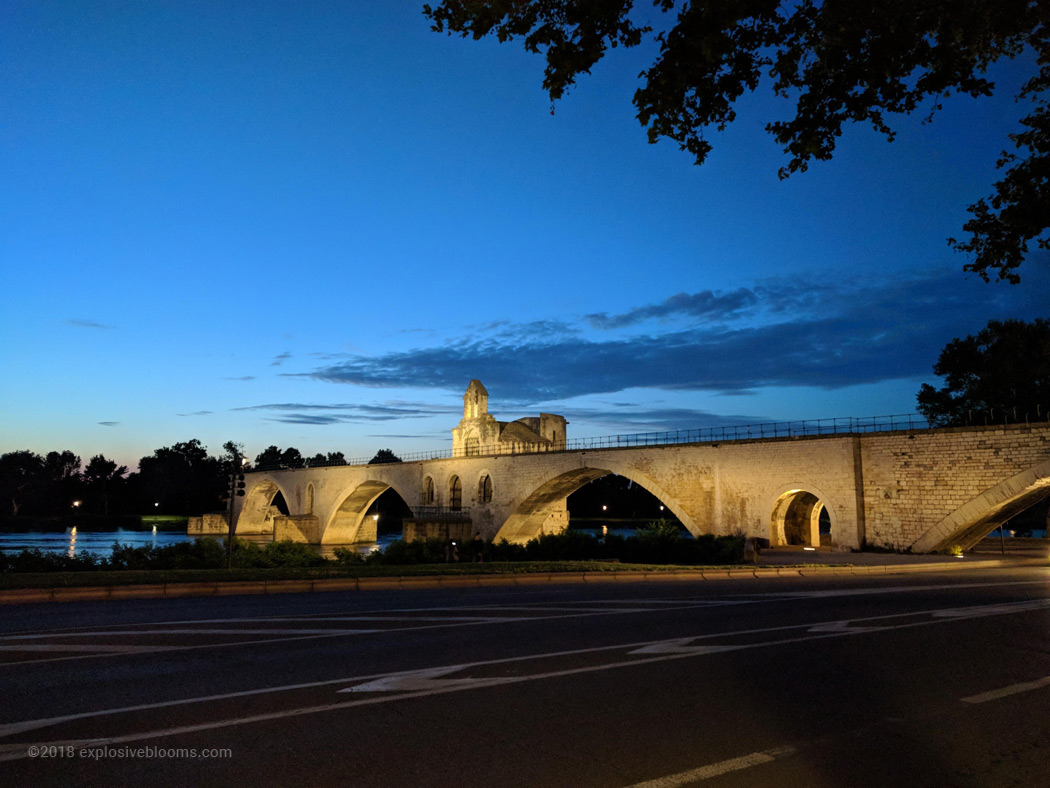 This bridge is the inspiration for the kid’s song, Sur le pont d’Avignon.

We also found ourselves standing in front of Palais des Papes (Popes’ Palace), the other main attraction of Avignon. I had to pull out the wide-angle lens for my phone, thanks to my sister. 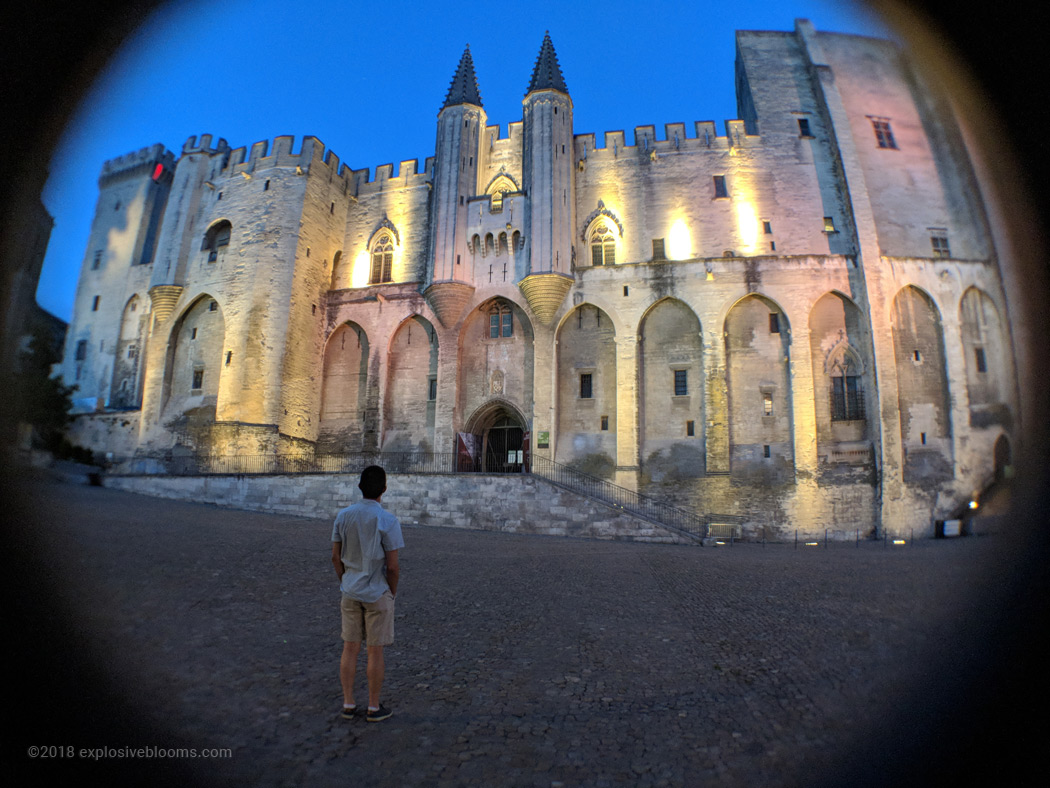 I’m now ready to hit the sack, as soon as I finish my cup of hot water.

It’s been a good start to our France and Iceland adventure!