Although it is like living in a greenhouse (because we haven’t had air conditioning since returning from our holidays), most of the plants (indoors and out) are soaking in this heat and humidity. I’ve only had about four casualties within the indoor group, and no deaths or injuries to the outdoor group. Speaking of my houseplants, I don’t know if my spider plants sent out runners because they are super happy, or if this was a survival tactic, but my friend that wanted a spider plant will likely get more than one!

My garden has truly turned into an urban jungle, and it feels like this happened earlier than in previous years. I can’t confirm without looking back at old photos and blog posts, but over 17 days, everything looks gigantic! Here is what my pretty little garden looked like pre-holiday: 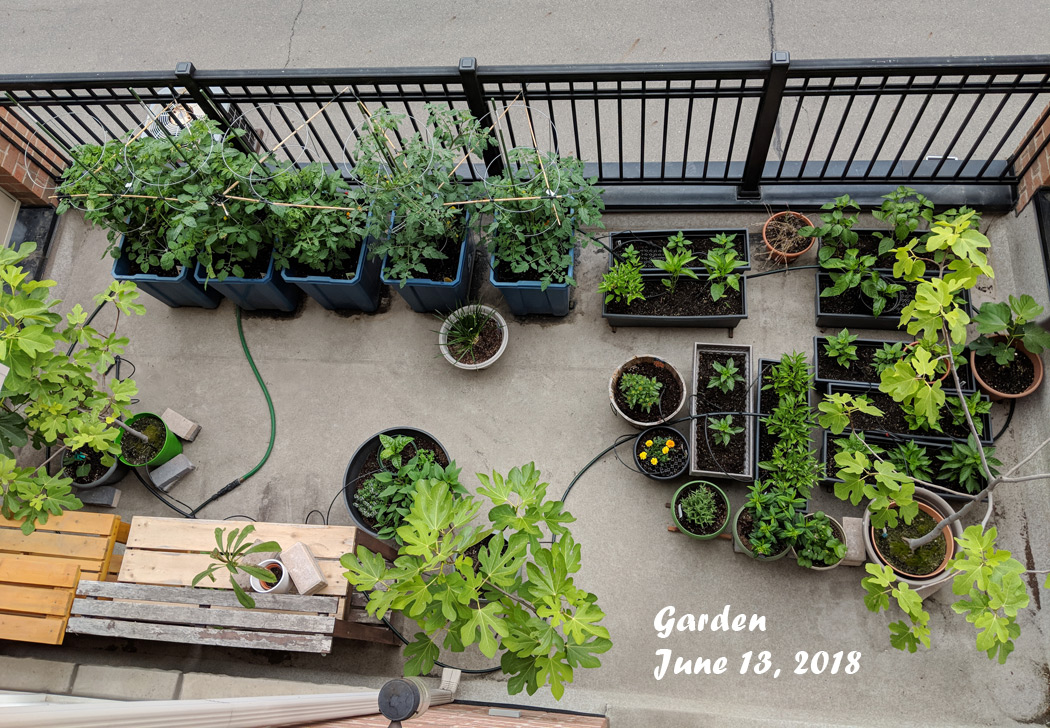 Today, I have to duck and squeeze around figs and tomato plants. And this is after pruning back the tomato plants! 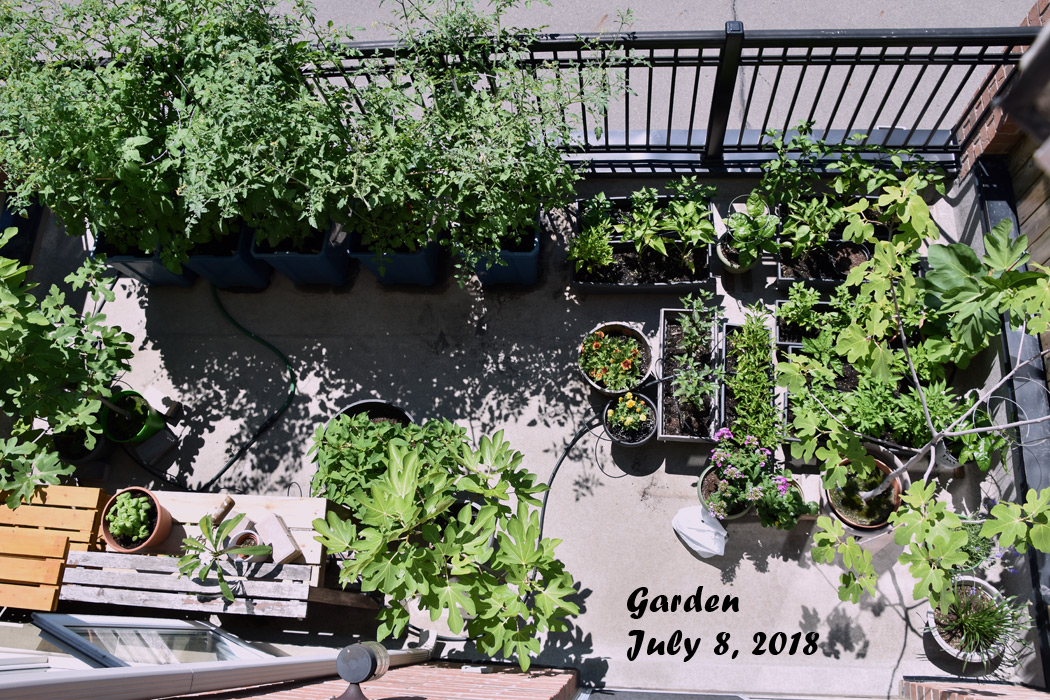 As you can see, some significant growth, especially in the tomatoes. 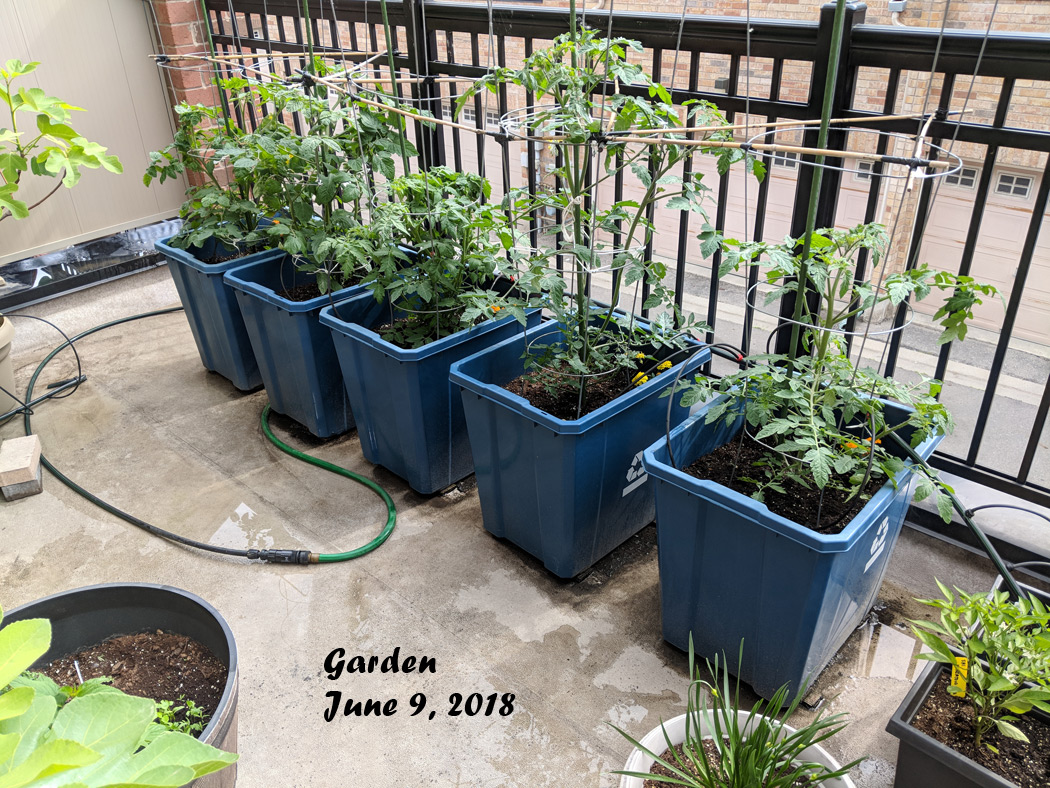 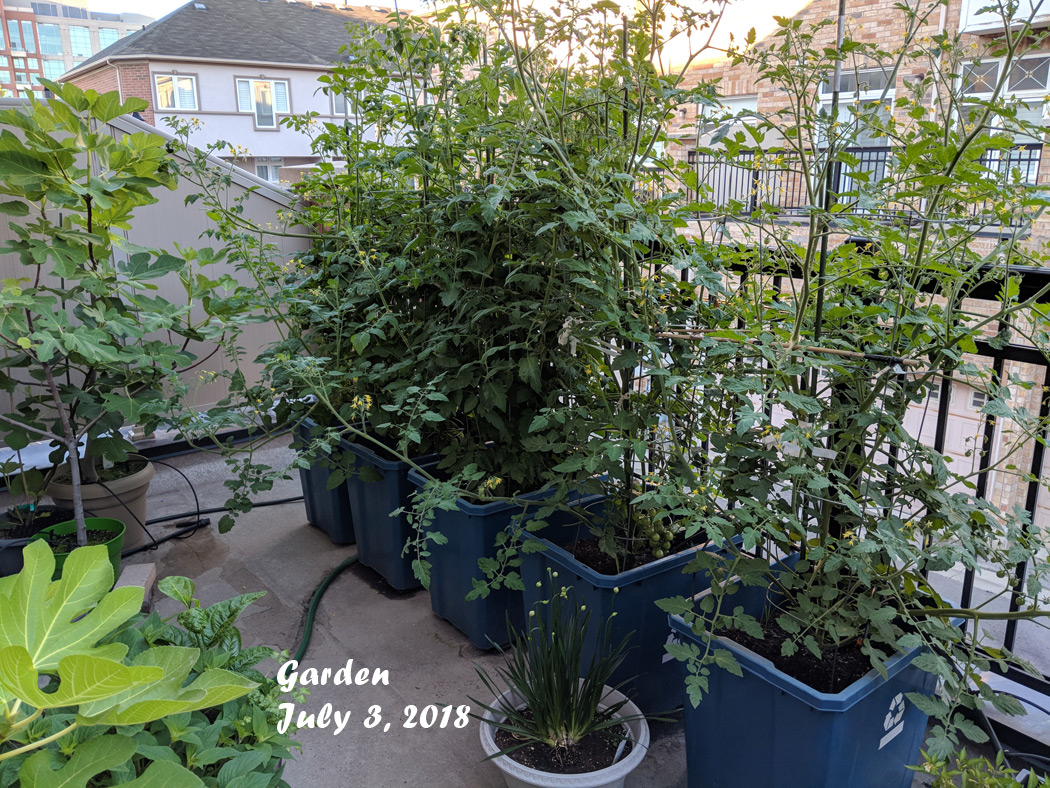 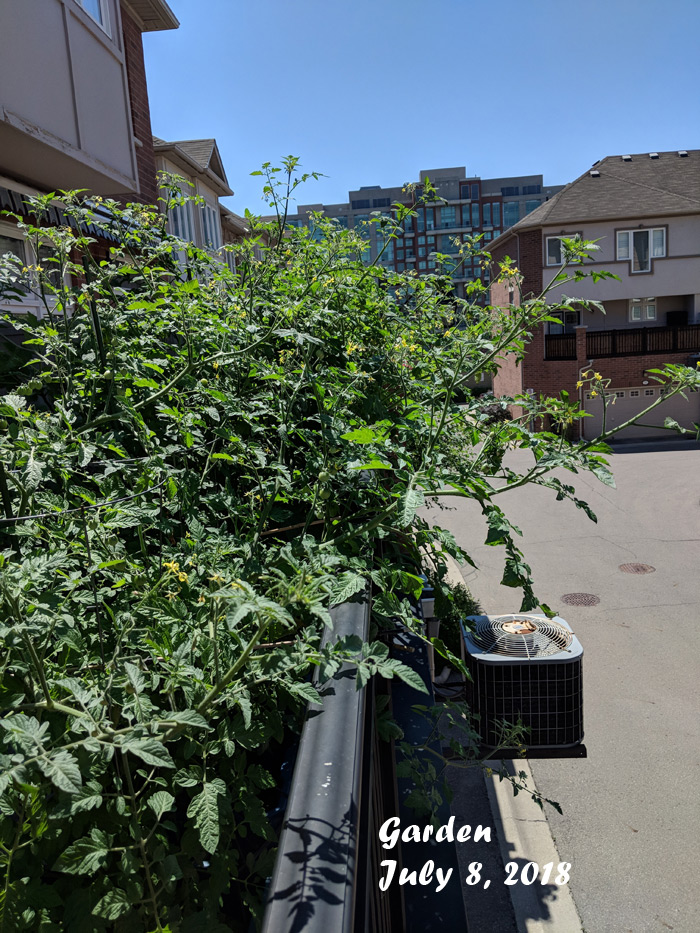 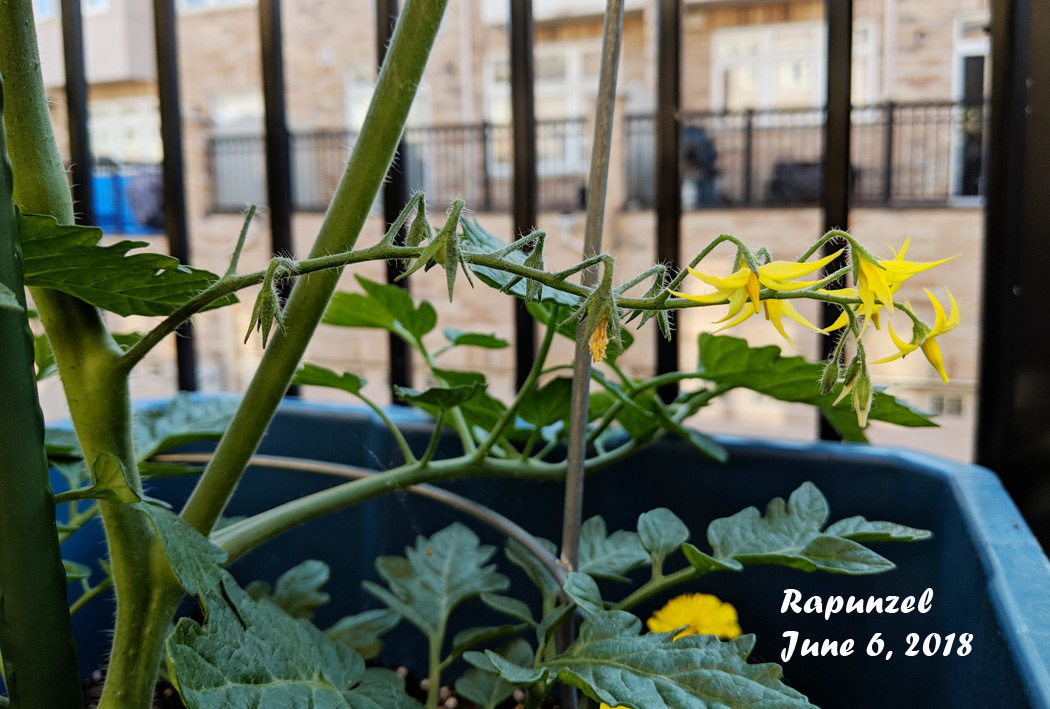 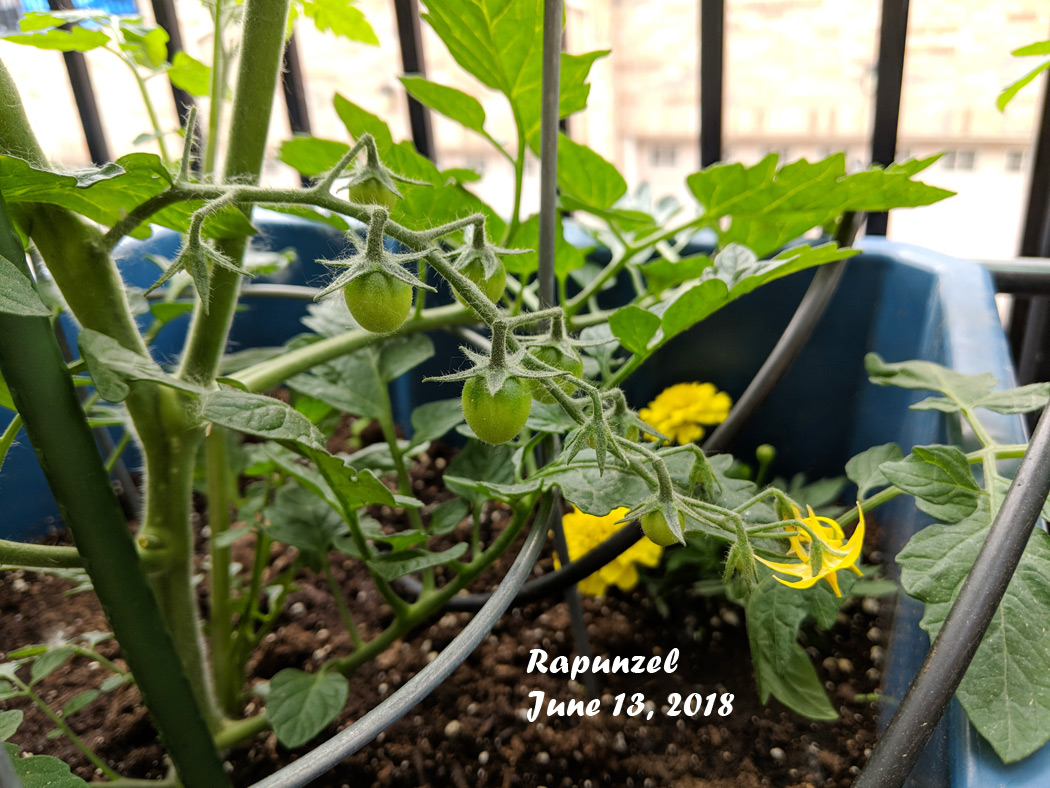 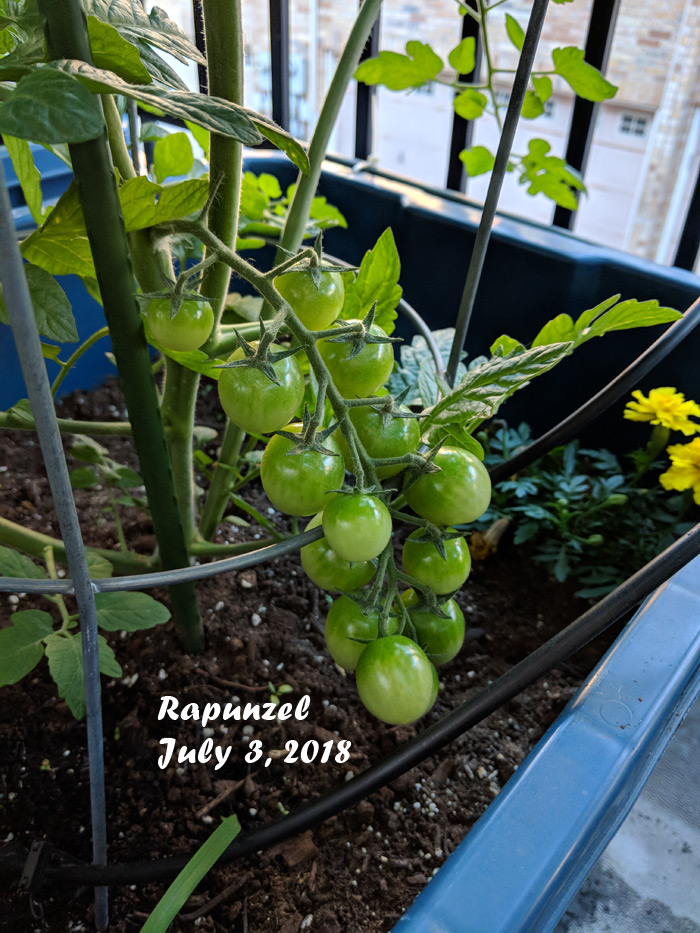 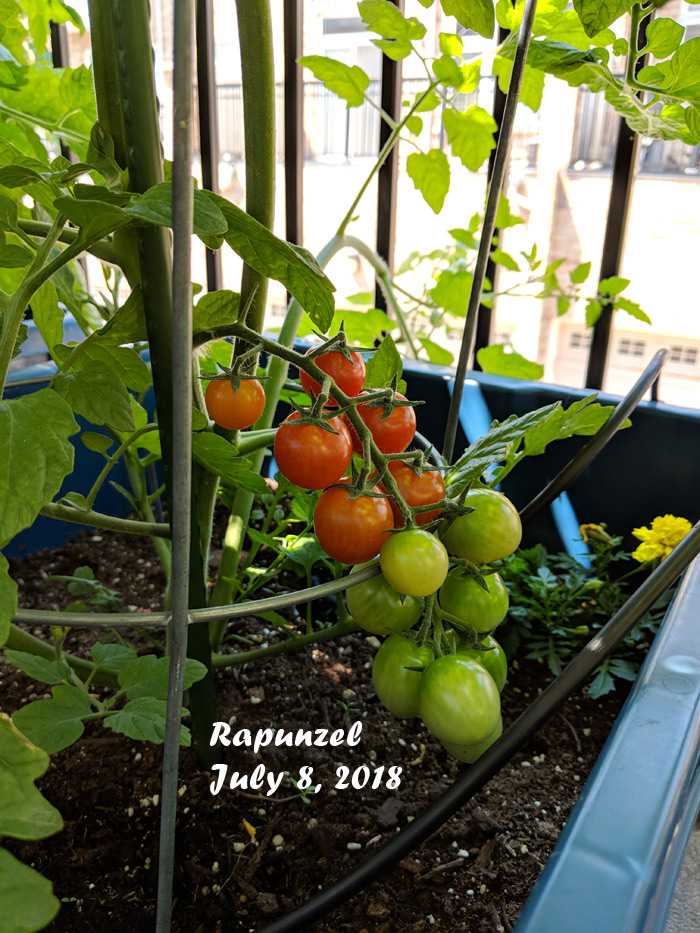 In the pepper patch, one of the marcato plants (right side, nearest to the railing) decided to grow out towards the railing instead of upwards. All marcato plants have fruit. All shishito pepper plants have lots of fruit (much more impressive than last year). The Chinese five plants are only starting to fruit. Chili pepper plants are still on the smallish side with flowers and some have small fruit, but hot peppers take a long time.

The herb planter… I had pineapple sage, lemon thyme, and cilantro and basil had just started coming up. I had also included a potted passion fruit within the herb planter. The reasoning was that the herbs don’t like being over-watered, so I figured if I ran the drip line into the potted passion fruit, the excess water would leak through and saturate the rest of the herbs. 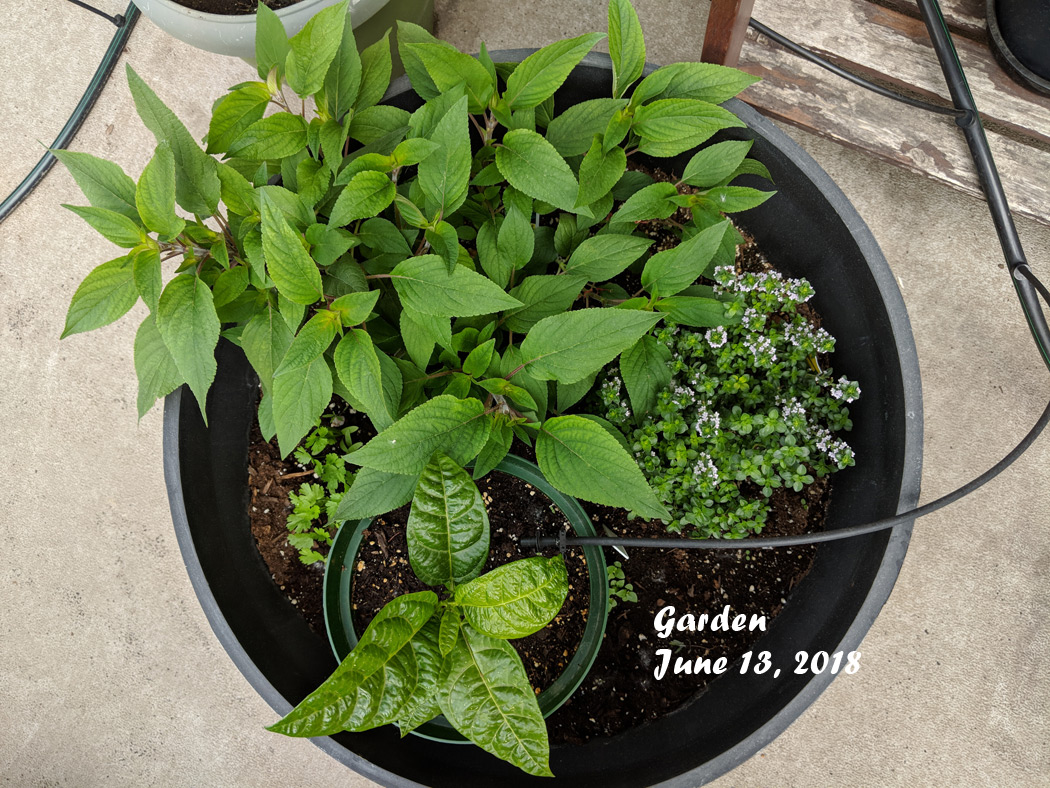 Well, my herb planter did not die from over-watering. The pineapple sage plant simply took over! As for the passion fruit plant, it hasn’t progressed quite as vigorously as the other (originally smaller plant), but the herb planter is in a shadier spot. I wasn’t able to spot the basil or thyme without digging through the mound of pineapple sage. 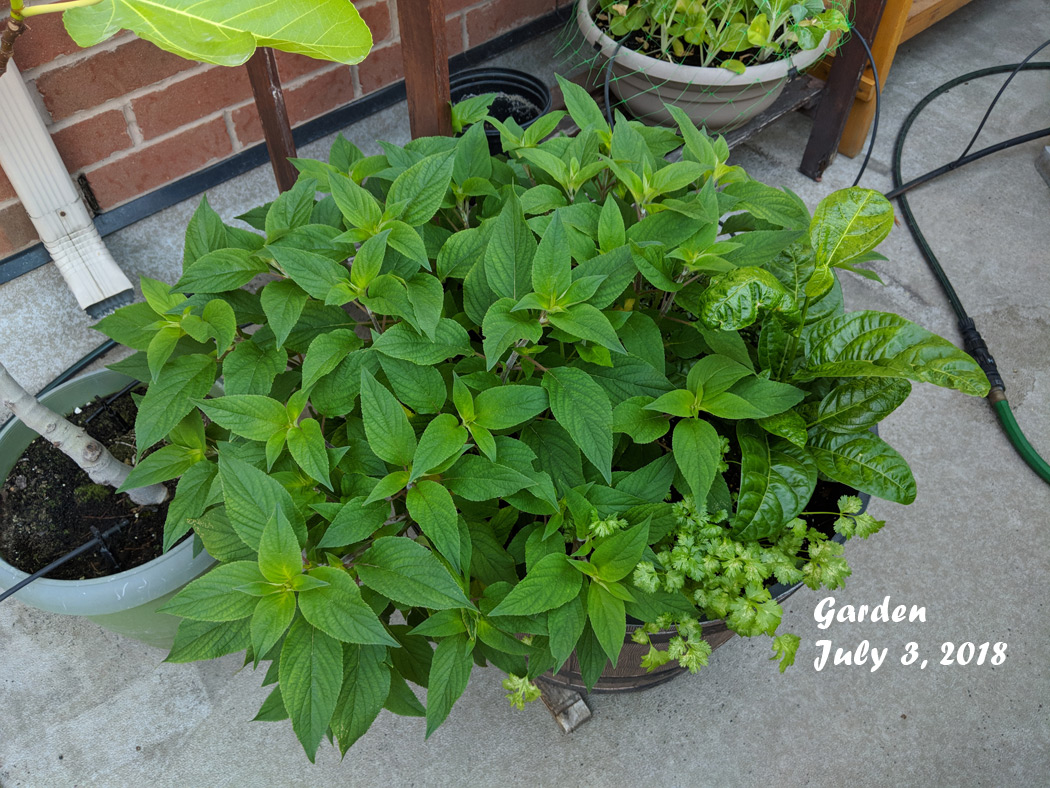 I’ve now removed the passion fruit pot, which was glued to the soil by the passion roots, and I’ve repotted this plant and placed it within the pepper patch where there is full sun. I’ve pulled out the sad looking cilantro and re-seeded both cilantro and garlic chives. I’ve also pruned the sage plant, but not too much because a friend told me that it attracts hummingbirds (though I’m 99.9% certain that during the fall migration, hummingbirds don’t take this route).

The other passion fruit that had a similar setup (the pot it was in was set within a pepper planter) sent out a healthy vine, so I’ve repotted and caged it. According to Gardening Know How, passion fruit vines are fantastic growers and climbers, often gaining 15-20 feet (4.5-6m) of length in a single year. Yikes! 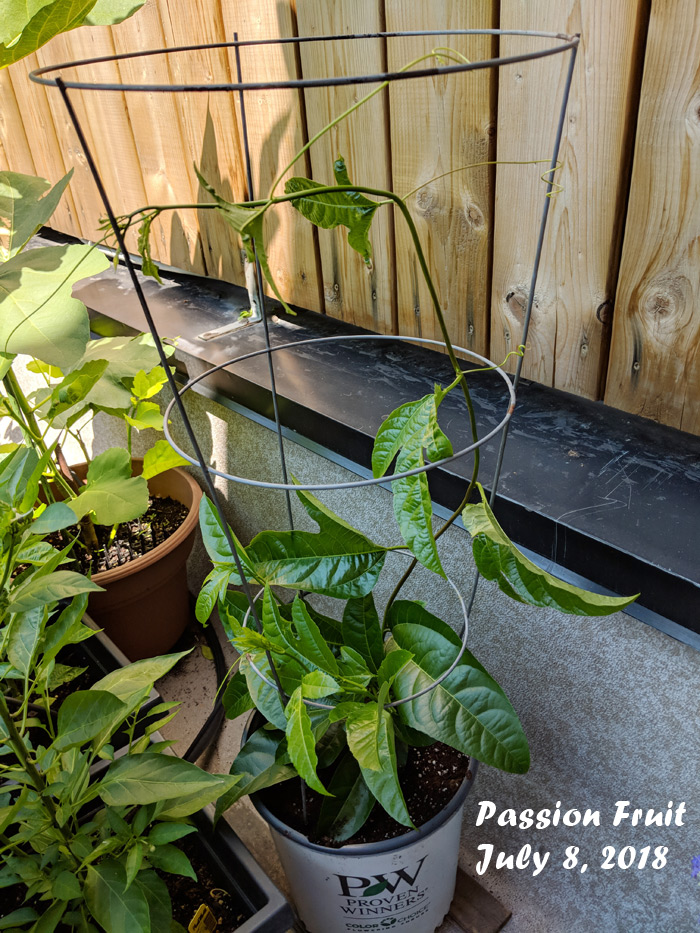 Prior to my holidays, the phlox was looking great, but had no flowers. At the last minute, I opted not to include a drip nozzle, asking my neighbours to check on it when they came over to water my houseplants (twice while I was away). Phlox like dry conditions, and I have proof of that. 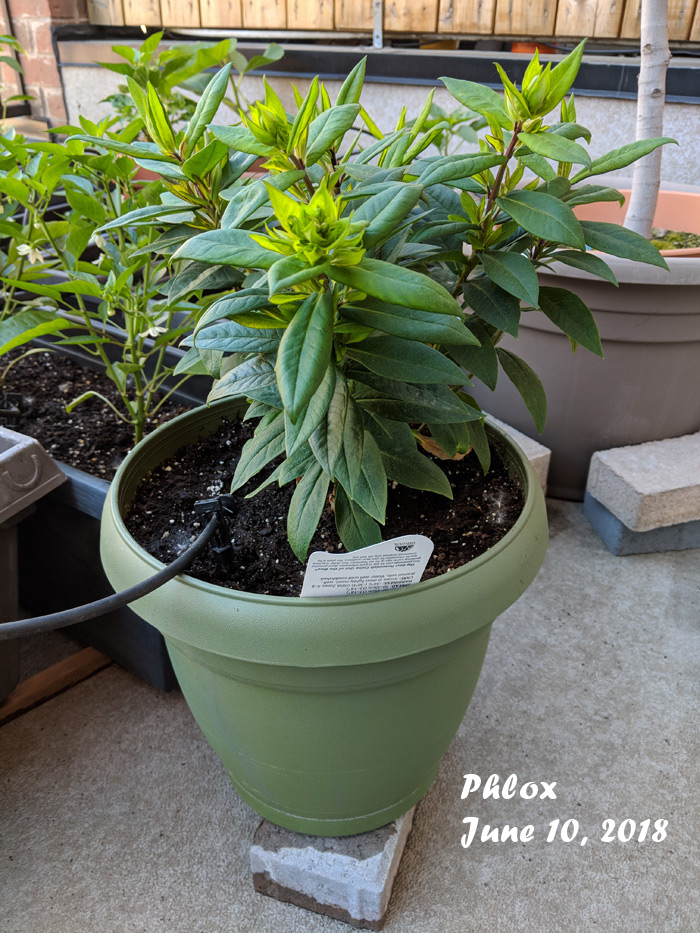 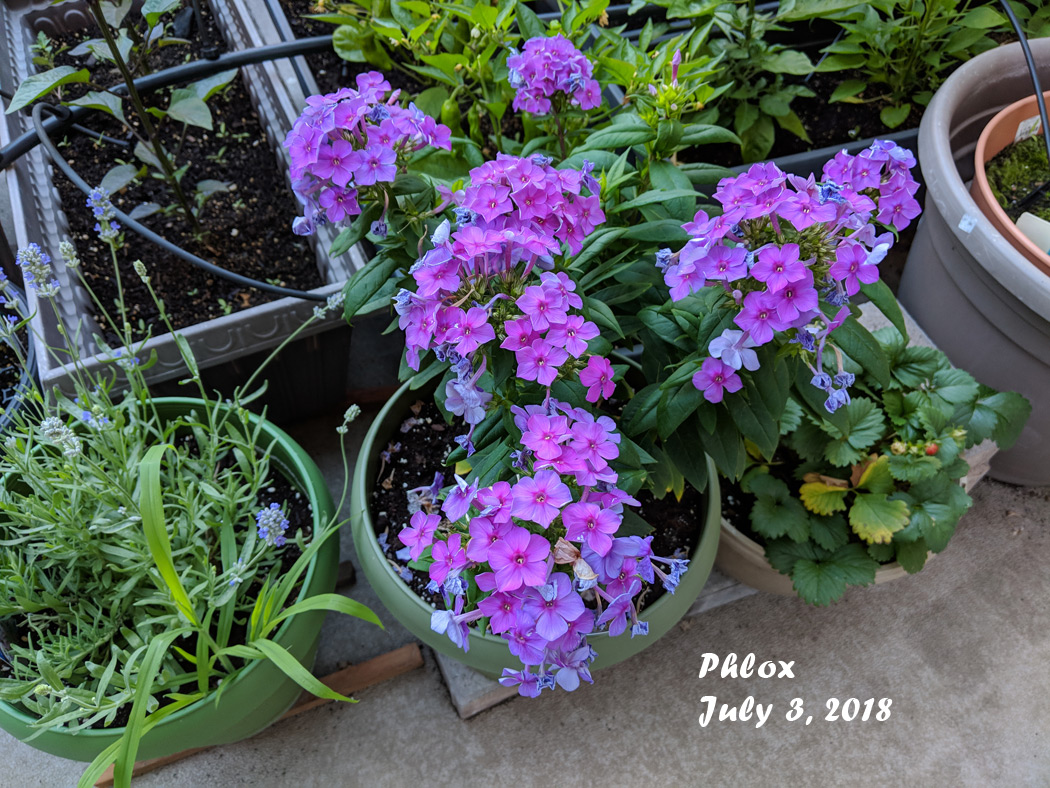 The pot of blanket flower (Gaillardia aristata) was part of the timed watering and it too thrived. 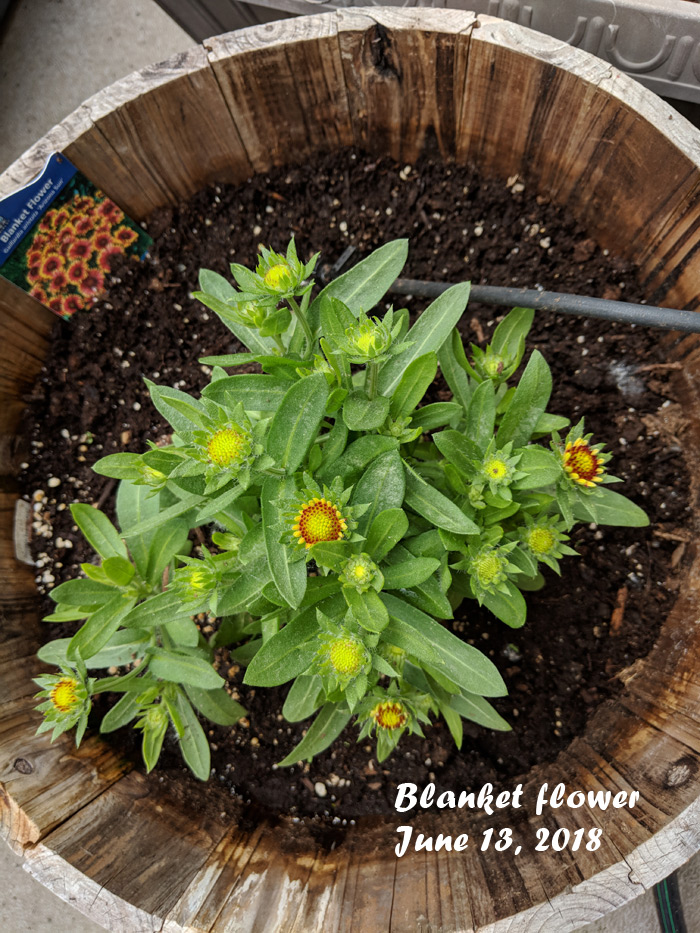 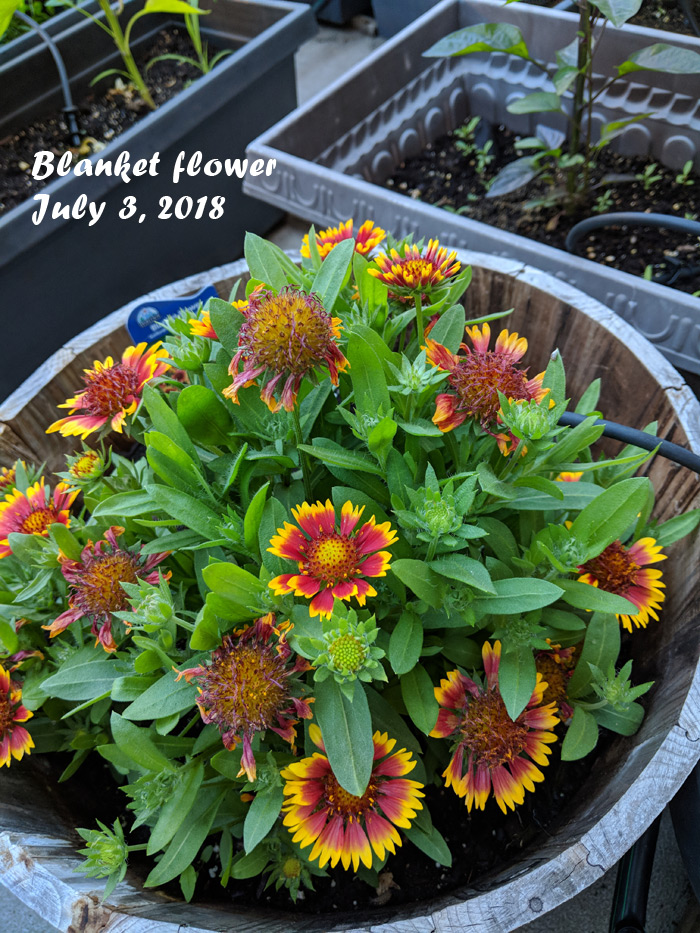 I’ve moved the phlox and the lavender back to the original location – by the bee house. Since we’ve had this heat wave, I expected the house to be completely inhabitable, especially since there were no bee-lovin’ flowers near it, but today I witnessed a small bee – possibly a mason bee – fly over and crawl into one of the tubes. That’s when I shuffled flowers over. I also had a monarch butterfly visit my garden yesterday!

My newest fig (from cutting) is the Desert King. This is the first summer for it, and it is behaving just as it did when it was attached to the the main stem – it’s shooting up. I’ve staked it as it’s growing on an angle (because the leader stem stopped growing and the new stem is actually a side branch).

I’ve saved the best for last – Plumeria. This one is a tough one. When I purchased it, it looked like I could expect many blooms. At first, this plant was indoors, but given that it likes hot, sunny weather, it’s been outdoors for most of its time with me. Slowly the buds were turning black, drying up, and flaking off. I wasn’t sure if it had a disease or if I wasn’t giving it what it needed. Turns out I could have been over-watering it (a blogger had mentioned they go 4-weeks without watering!) So, I stopped watering it and I picked off all the black bits and slowly it looked like I’d still have a small handful of flowers. 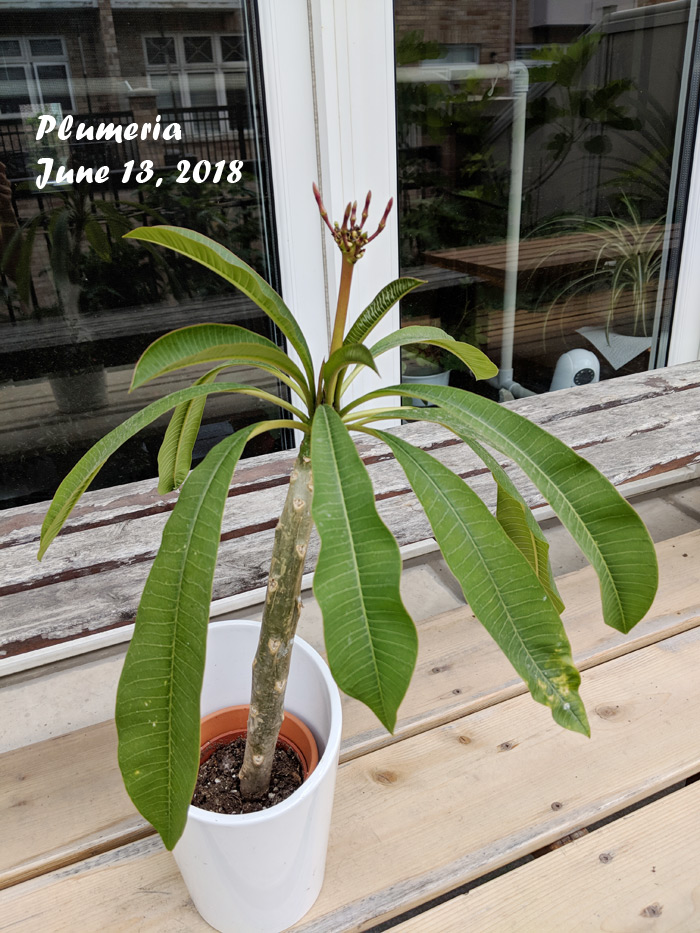 I told my neighbour to keep it quite dry. I have one beautiful bloom, and I think that will be all, but I’m happy. It’s gorgeous! 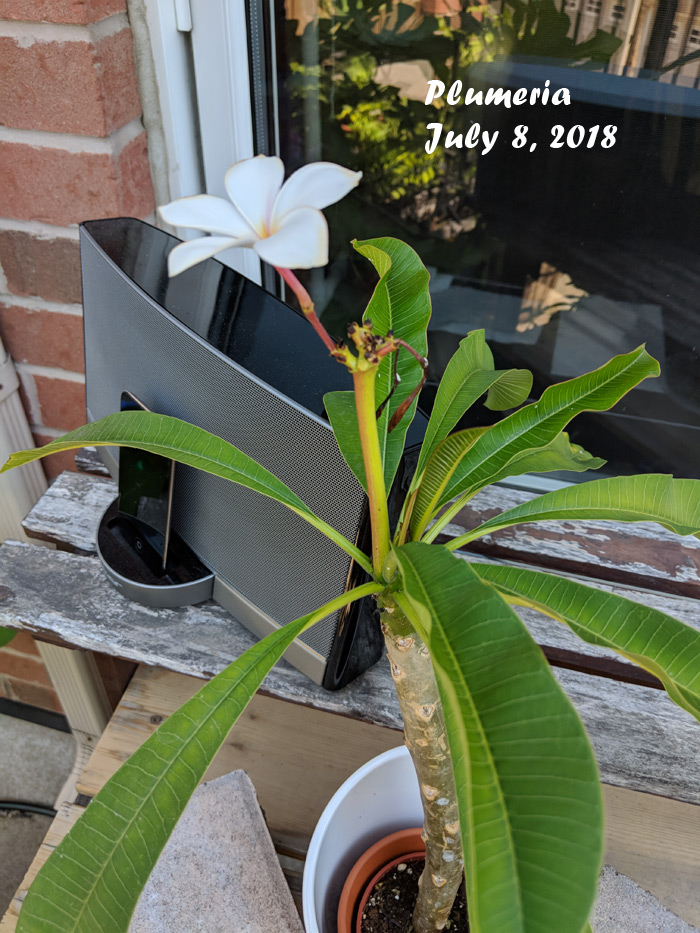 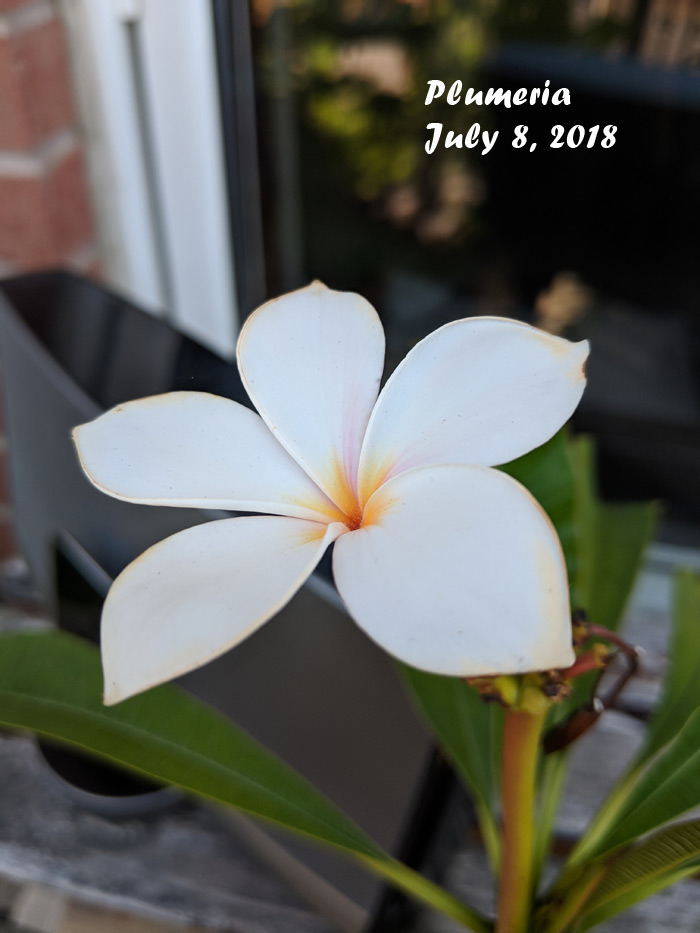 Now I just have to figure out how to get more flowers during its next bloom cycle.

I’m absolutely loving my garden this year. And it looks like we could have a good number of figs from the mama Desert King. Chicago Hardy is finally showing some fruit. The hot weather looks like it’s here for at least another week – great for the garden, but not so great for us. Hopefully we’ll have our air conditioning up and running again soon. People say that you get used to having no air conditioning. Yes, I can survive through it, but it means I’m sluggish all day (my place of work also does not have AC because the building is so old). Evenings and early mornings are the most bearable, though I am awoken early from the sounds of the birds and the three fans humming away in our bedroom.

The heat wave wasn’t just in Toronto. In Montreal, it was even hotter, and at least 51 people have died from the extreme heat (elderly or ill people without AC). I guess I should have savoured the cool temperatures in Iceland while I was there!