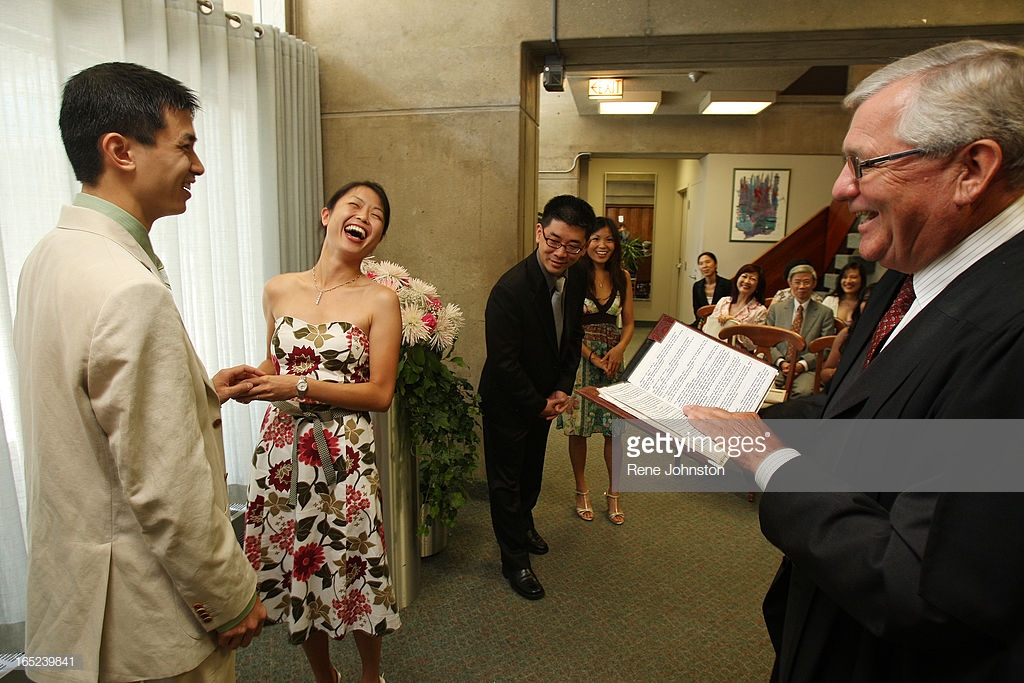 Ten years ago, hubs and I made an official commitment to be there for each other for the rest of time. Unbeknownst to be me that morning, that ‘I do’ moment would touch my heart and soul so deeply. It made me fiercely come to realize the significance of that day, that moment, those words. I had known very early in our relationship that he was the person I wanted to spend my life with. I didn’t need a piece of paper to make that promise, but this socially recognized and expected ritual was important to him, so I went along with it under certain conditions. I didn’t want this to be a big deal. I wanted this to be small, like immediate family only. (Ironically, this private moment ended up on page A4 of the Toronto Star). And now many people knew what I had done over that weekend 10 years ago (because we also did not make any big announcements about getting married).

Ten years has flown by too quickly. We’ve enjoyed and made so many incredible memories together – I never want it to end. A part of me feels a little sad because time doesn’t stop, and I don’t want us to run out of time. I don’t dwell on this too much, but it’s a thought that occasionally enters into my thoughts when I notice the grey hairs amassing on my head. But then we go do something that gets my heart racing and brings upon those deep belly laughs, like the one in the photo from my wedding day – and I feel so alive!

Traditionalists would give tin as a ten year wedding anniversary gift. Modernists would give diamonds. My hubs is ultra modern as he surprised me with the gift of falconry This was an actual surprise! I had no idea what we were going to do. He would only tell me that we were going to do an outdoor activity. It wasn’t until we pulled into the driveway that said Hawkeye that I started to get excited. We were greeted by Rebecca, one of Hawkeye’s falconers. On the land, there is a large building that houses all of their birds. Rebecca quickly introduced us to the birds before we stopped in the shade to spend some time with Elsa, their snowy owl. 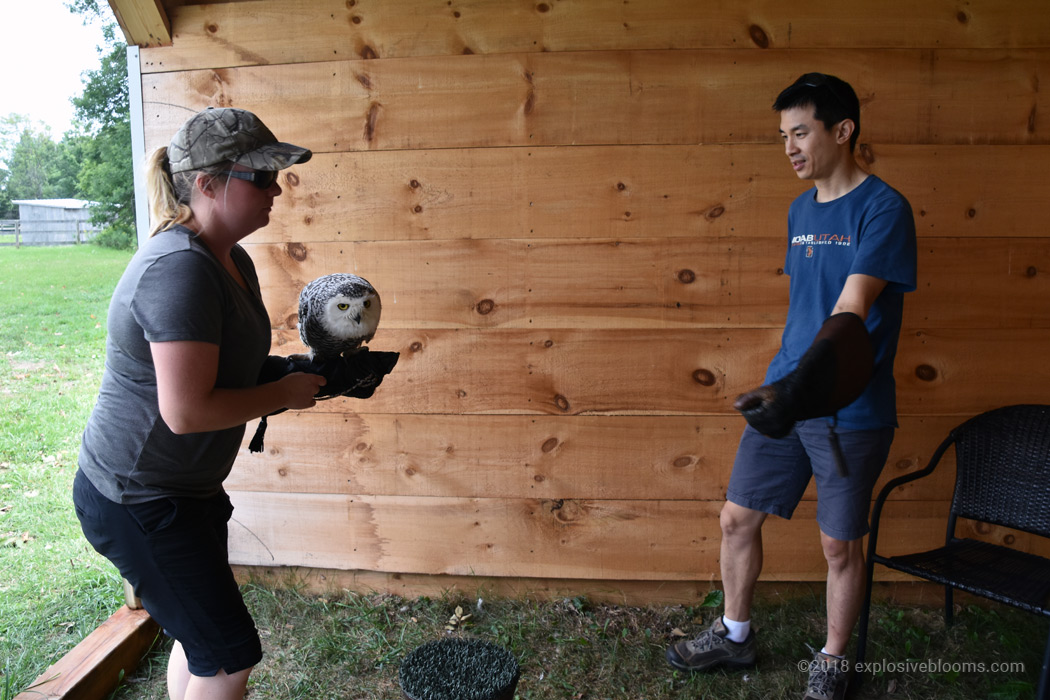 I love this next photo of hubs and Elsa checking each other out. Apparently she is studying and remembering his face. 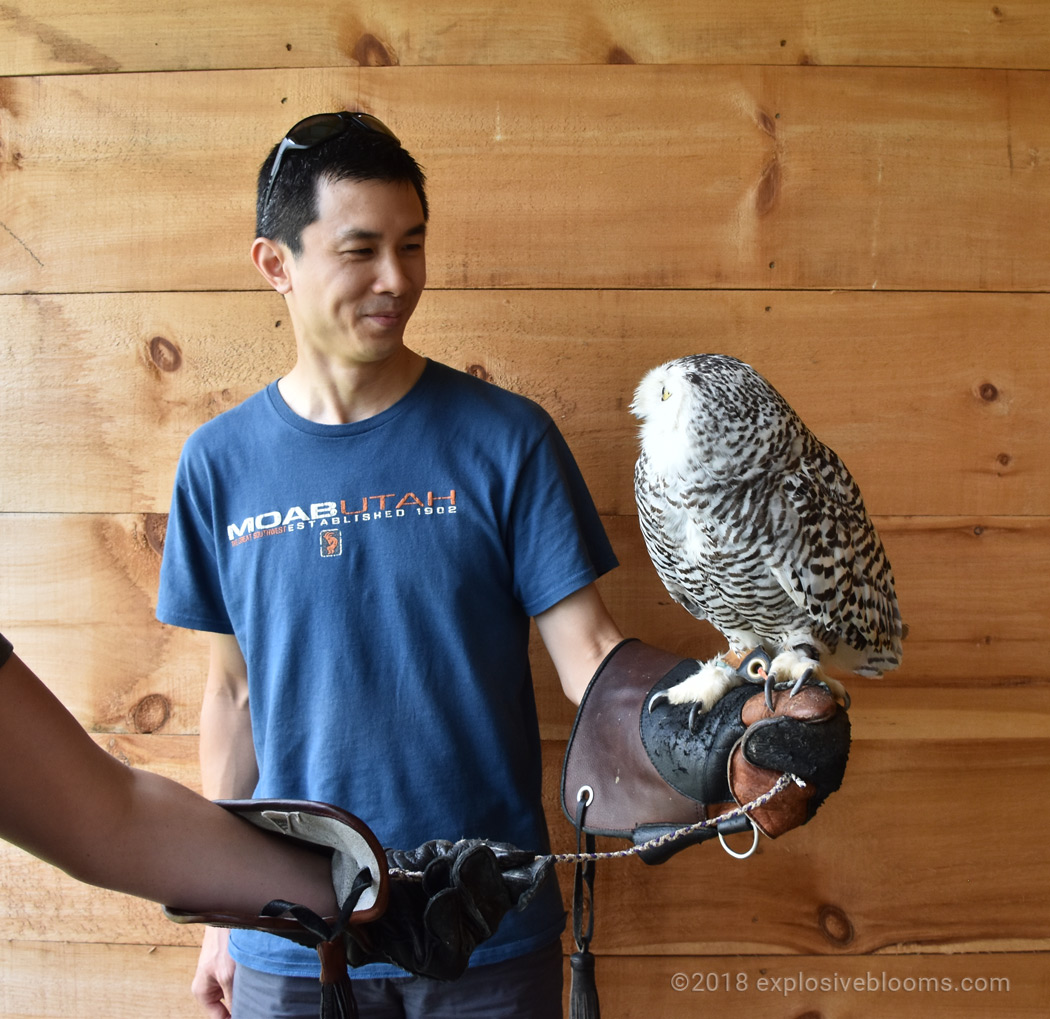 Elsa is a calm and curious owl, so she does allow people to touch the top of her head. As a snowy owl, the temperatures we’ve been experiencing this summer are not the most comfortable for Elsa, which is why her handler has a spray bottle to keep her cool. Initially when hubs touched her head, he said it felt like wet feathers, but we found a spot above the eyes that was dry. She is currently molting (shedding feathers). Her feathers are super soft. 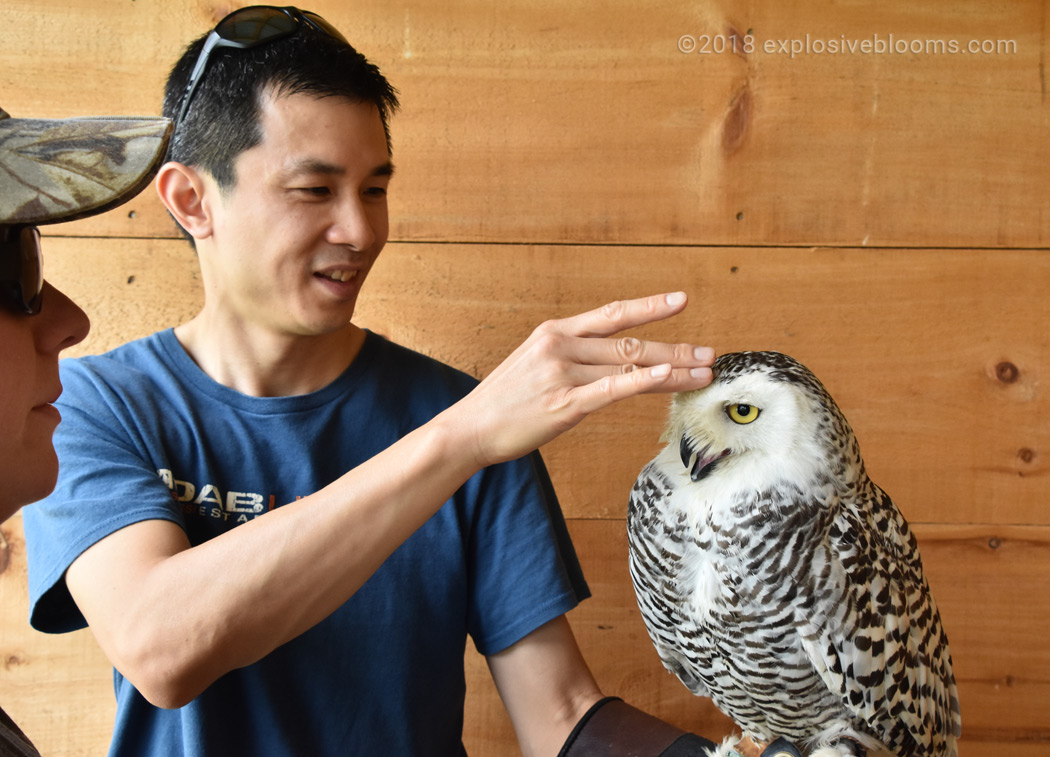 Elsa weighs about 5lbs. Her mouth is open as panting is the technique used to cool herself down since she does not have any sweat glands. This behaviour is very similar to dogs. She had been panting when we first met her, but in these photos, she’s just breathing normally through her mouth, and not panting. In this covered shed, the temperatures are not too bad. When she’s in her enclosure, we were told that she will sometimes dig a little hole in the dirt and sit in there to keep cool.

Don’t mind me crazy hair! I wasn’t even thinking about how I looked at Hawkeye – I was so focused on all the beautiful birds! It almost looks like Elsa is smiling for the camera. 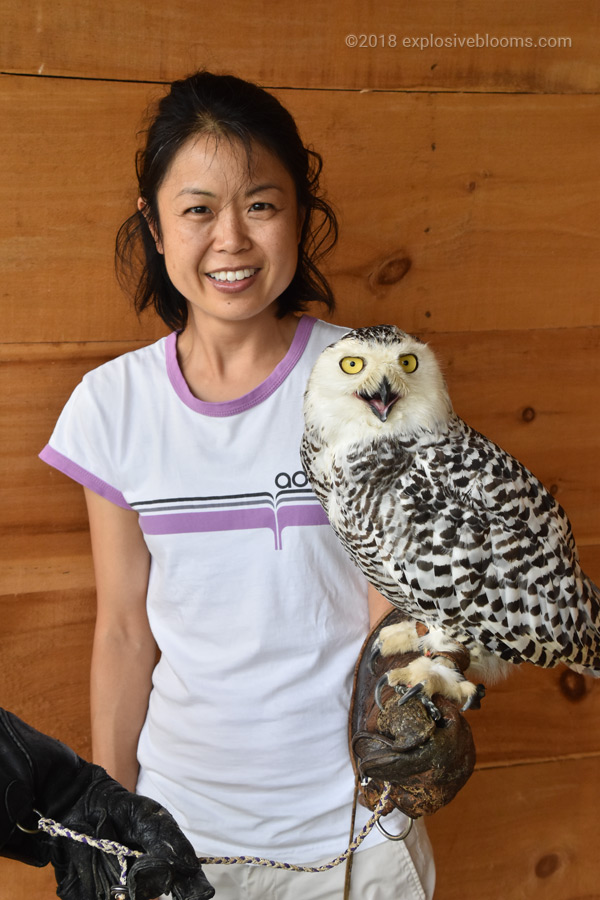 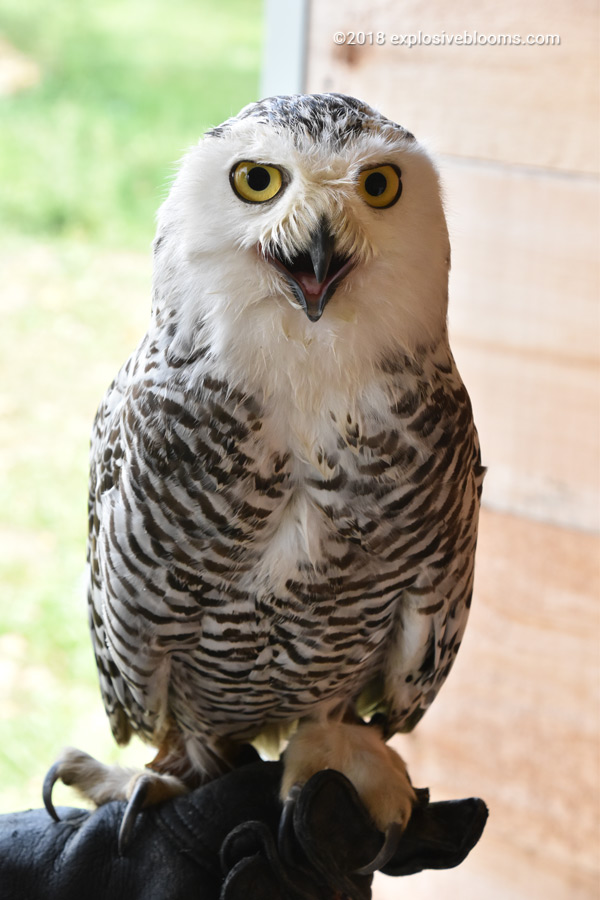 Owls are silent flyers. In this video, it is explained how unlike other birds, owls can fly without being heard. It’s remarkable. Note that the owl in this video is a barn owl, not a snowy owl, but the physiology is the same.

Following Elsa was Jack Daniels, a peregrine falcon, the world’s fastest animal. It can reach speeds of more than 386 km/h (240 mph) during dives. It’s resting heart rate is 190 beats/minute, making this a fairly nervous/skittish bird. For this reason, we did not get to have Jack perch on our arms, but we still had the opportunity to get up close. 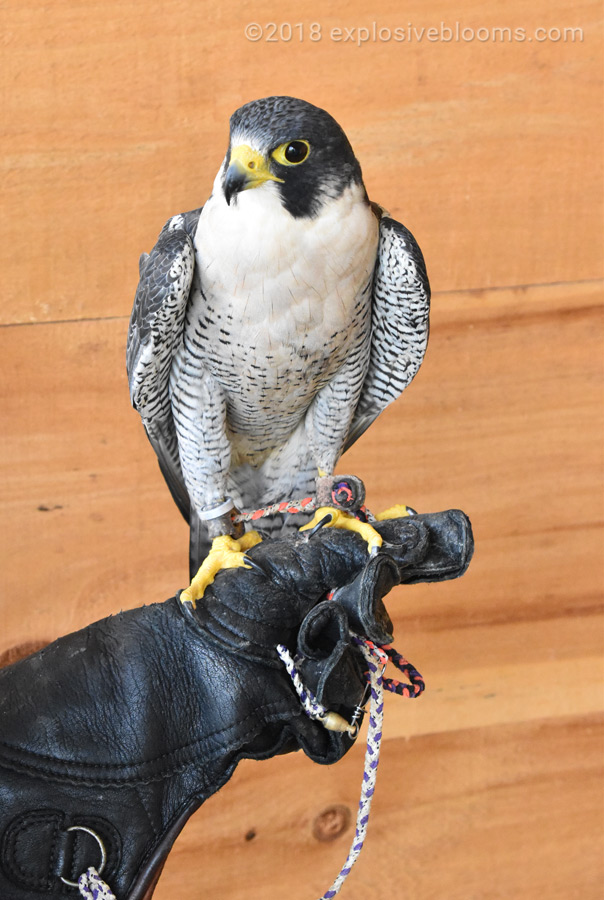 Peregrines are not large birds, but they are fast and he does have a tooth built into his beak, which helps with the kill. I love his legs – looks like he’s wearing a pair of pantaloons. 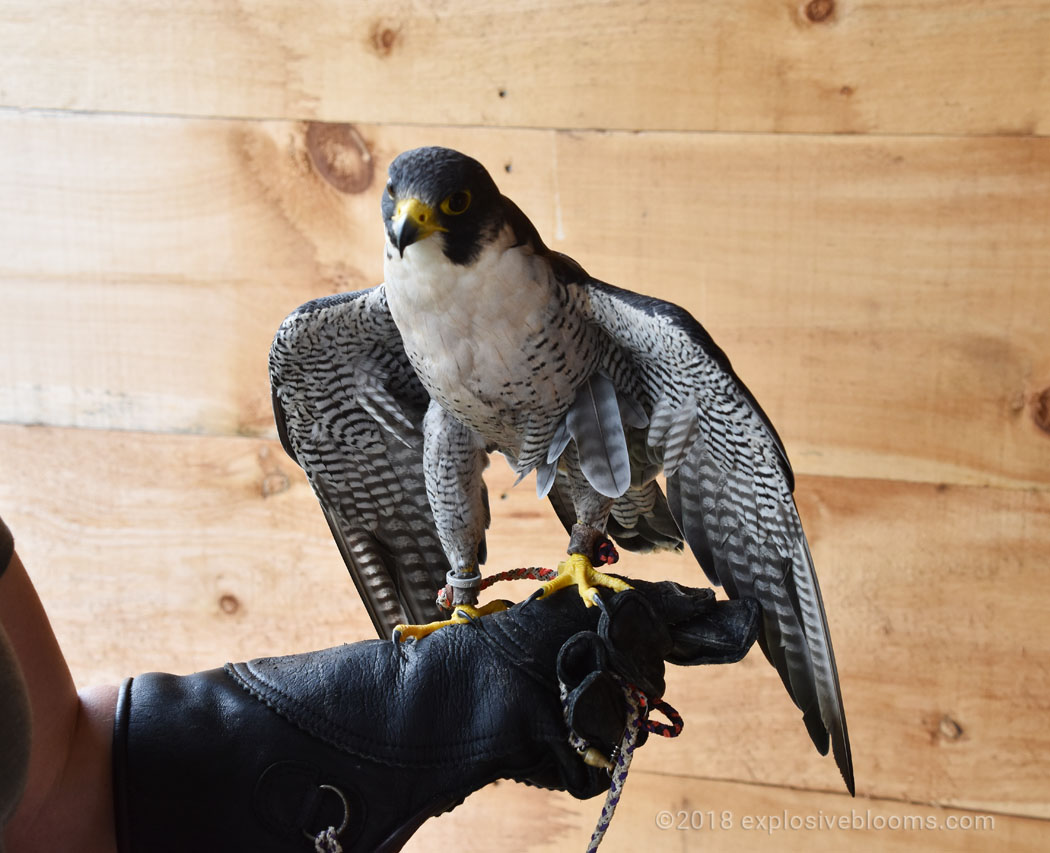 Rebecca also pointed out that he has one nostril slightly larger than the other. This is by design because they do fly at such high speeds, and the slightly larger nostril allows him to be able to breath. If we were to hurtle through the air at 360 km/hr, we would suffocate. 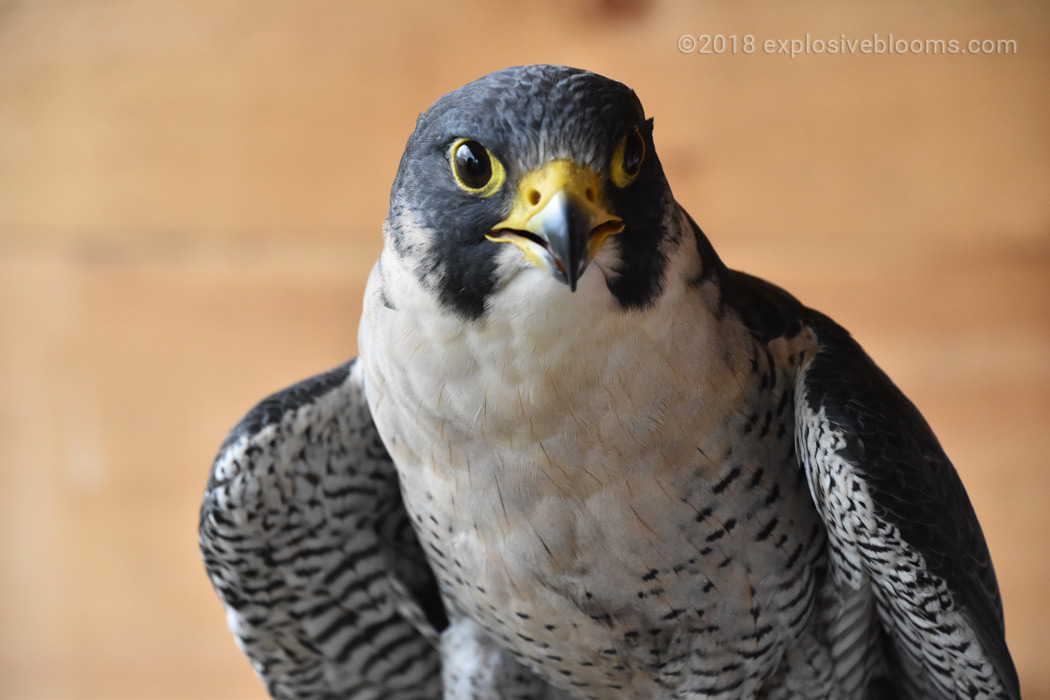 We were told that there are likely 100 peregrines living in downtown Toronto. They prefer high-rise buildings as one of their food sources are pigeons. There are some live webcams you can check out.  Here’s a video showing how the peregrine spots and catches its prey.

It was time for us to go into the building that houses the residents of Hawkeye. We walked into the enclosure of their golden eagle, but he was not trained so not so keen to have visitors. What a beautiful and majestic looking bird. This one weighs 15 lbs and has a wingspan of 7 ft! We did not get to see it fly, and he stayed at the far end of his enclosure. 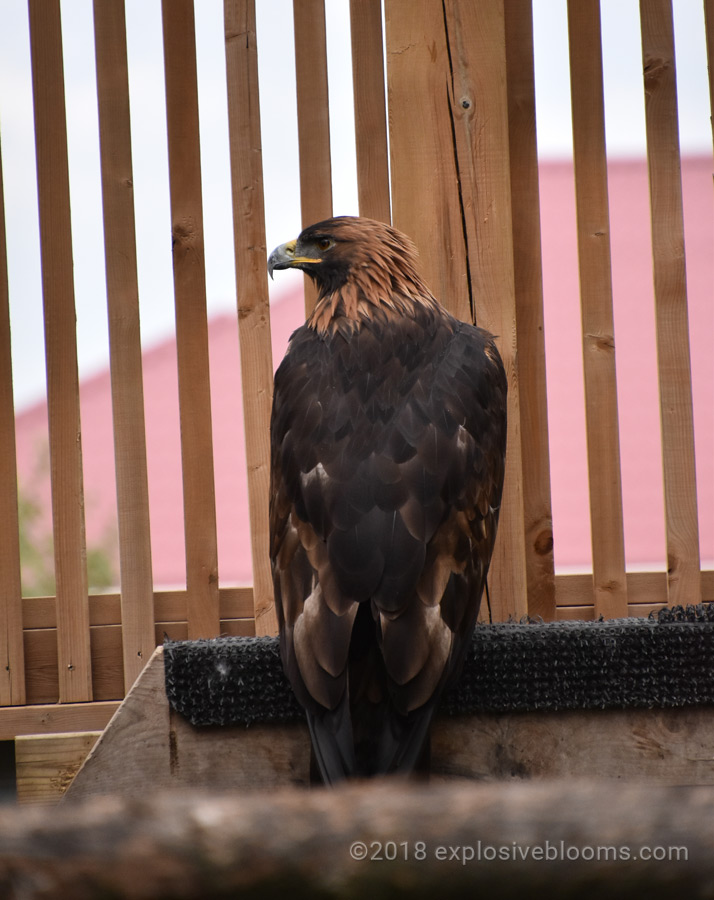 The golden eagle has been known to take down goats. It can apparently even lift a kid (baby goat), though I just saw a video of a golden eagle picking up a toddler on a golf course!

Next in line was the bald eagle, which was apparently very hungry. As soon as Rebecca entered its enclosure and tossed it some food, it flew over before I even stepped through the door.

This is another large and magnificent bird. Hubs and I did see bald eagles when we were in Alaska, but not this up close. 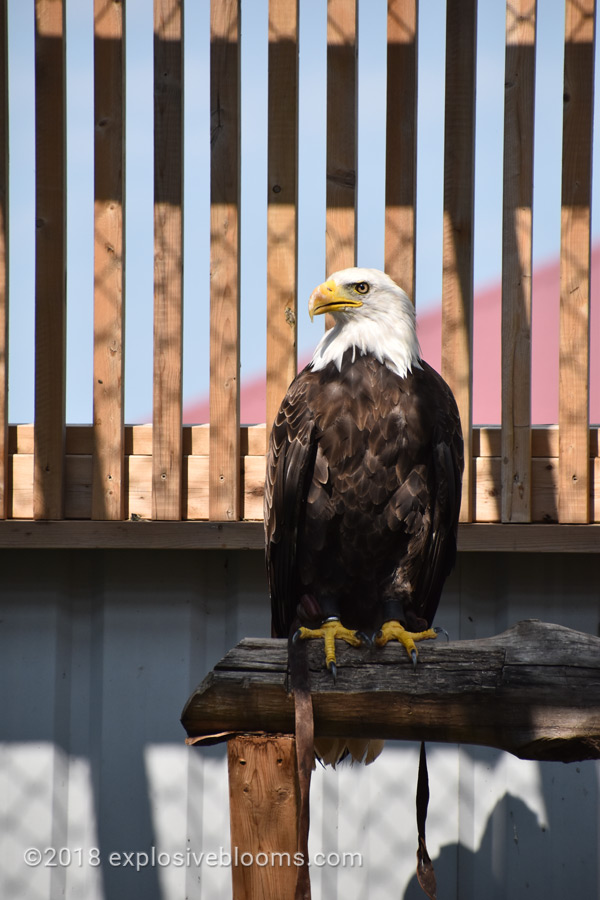 Look at those feet! Not as big as the feet of the golden eagle, but still impressive. 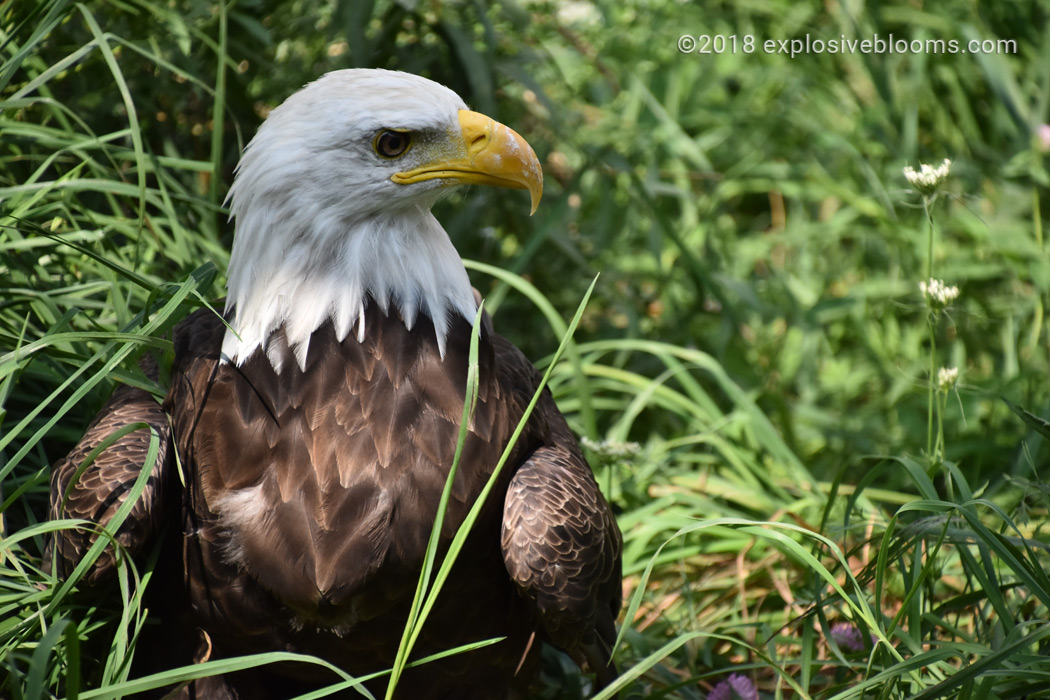 I did have quite a scare. Rebecca was talking to us, and I guess she put her hand in the food bag (but didn’t take anything out), but the eagle noticed this motion and suddenly took flight right toward me! Obviously it didn’t fly into me, as I’m still considered an apex predator. It landed before it got too close, but seeing at almost at eye level soaring toward me was heart stopping! 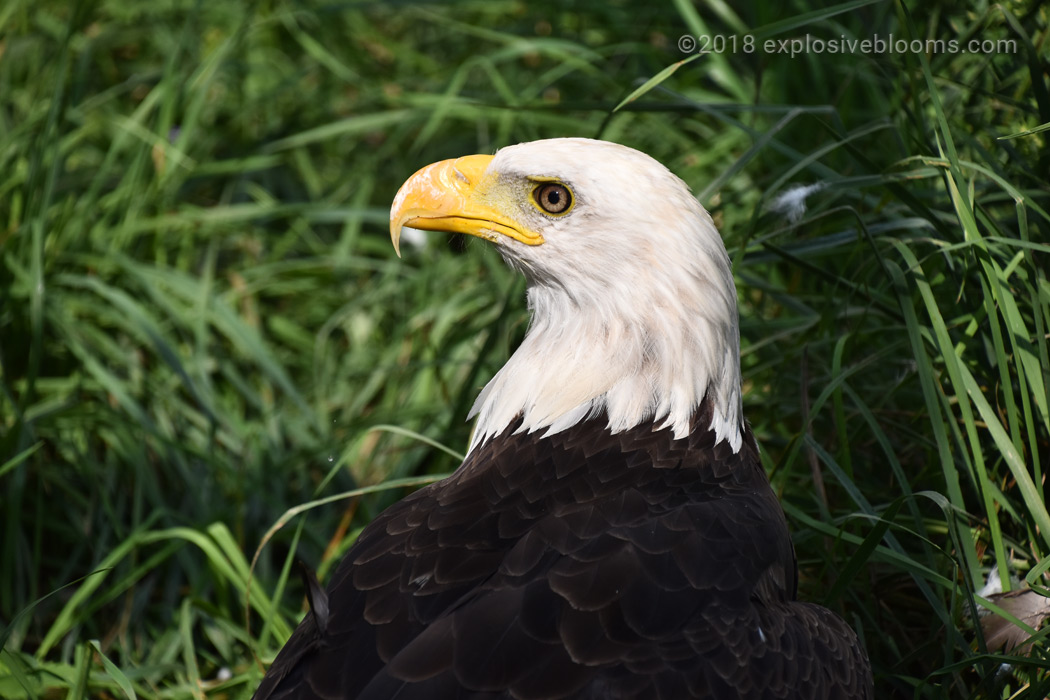 The hands-on portion of this experience was about to start after leaving the bald eagle. We were going to have the opportunity to fly the birds. To become a falconer, it takes a lot of training. I was seriously interested, until I learned that most birds of prey can live at least 30 years in captivity and they require you to be there for them every day. This means, you have to commit to never going on vacation again. I’m not sure that’s a commitment I am able to make. The training usually starts with smaller birds, which is likely why we were introduced the Buckstop, a harris hawk. Its flying weight is just under 700 grams! Buck is a small, but well-trained bird, perfect for us newbies. 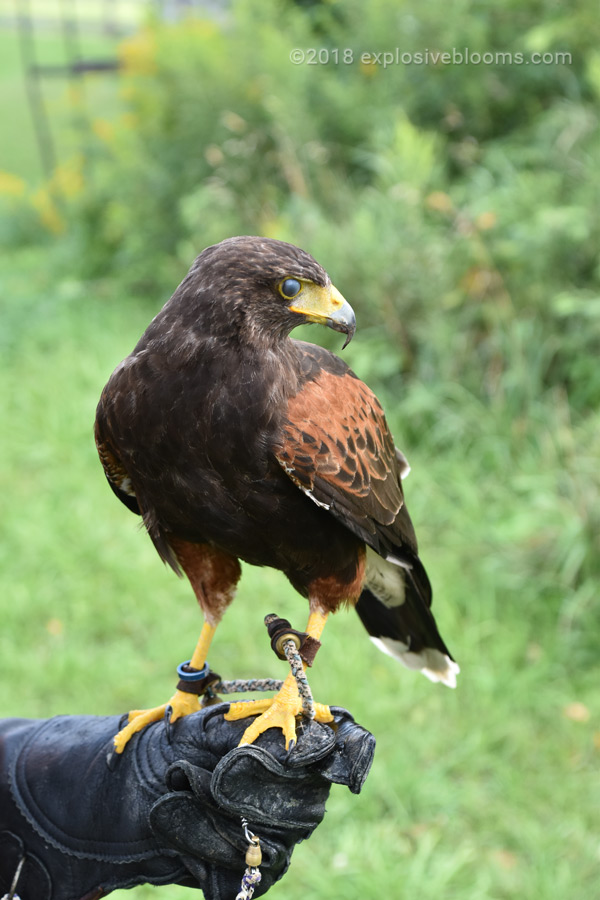 Buck is easy to work with because even if you don’t really know what’s going on, he already knows the drill. I put on the glove, made a fist, and stuck my arm out. Without any fuss, he stepped over from Rebecca’s glove onto mine. I was excited and in awe. 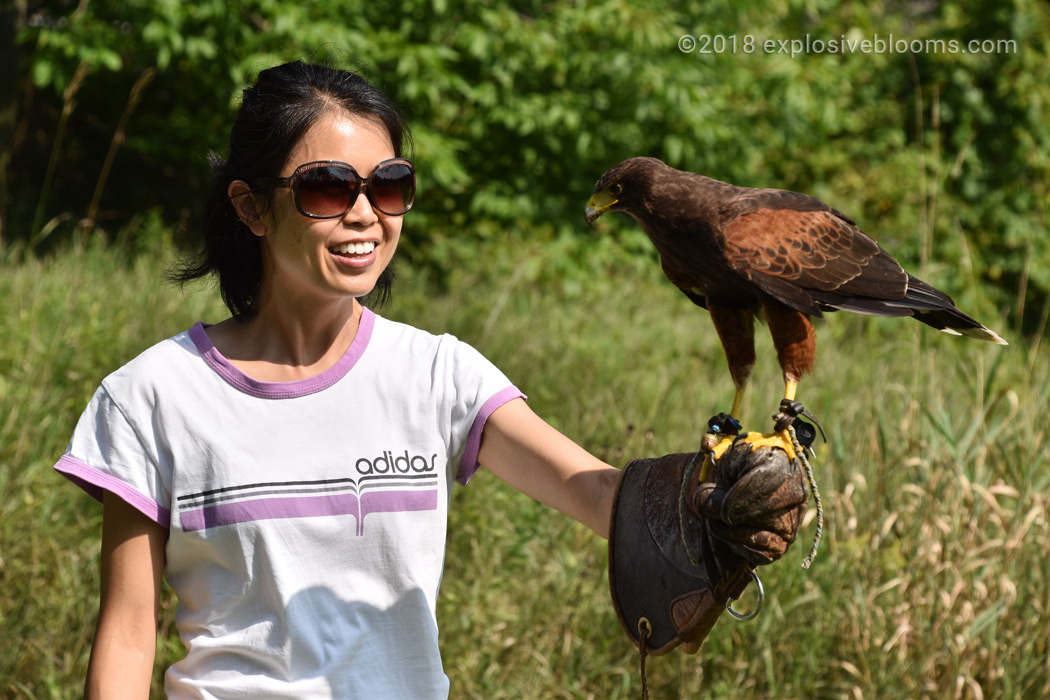 To fly the bird, you turn your body (and the bird) in the direction of where you’d like it to fly. We were in an area that had a large clearing, with perches erected on one side, and trees on the other. I turned Buck toward the perches and gently swung my arm in the direction of the perch, and off he went! 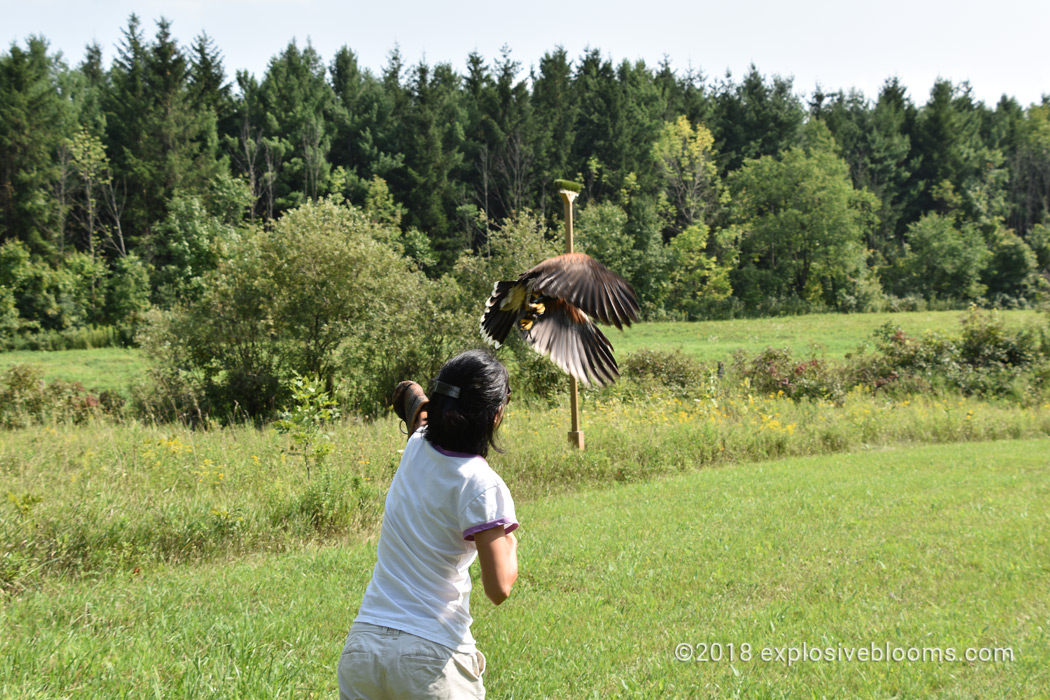 He sat and waited on the perch until Rebecca put a piece of meat (thawed chick meat) on my glove while I am holding my arm straight out with the backside of the glove facing Buck. This was the coolest feeling – having Buck fly right at me and landing gracefully on my gloved arm. 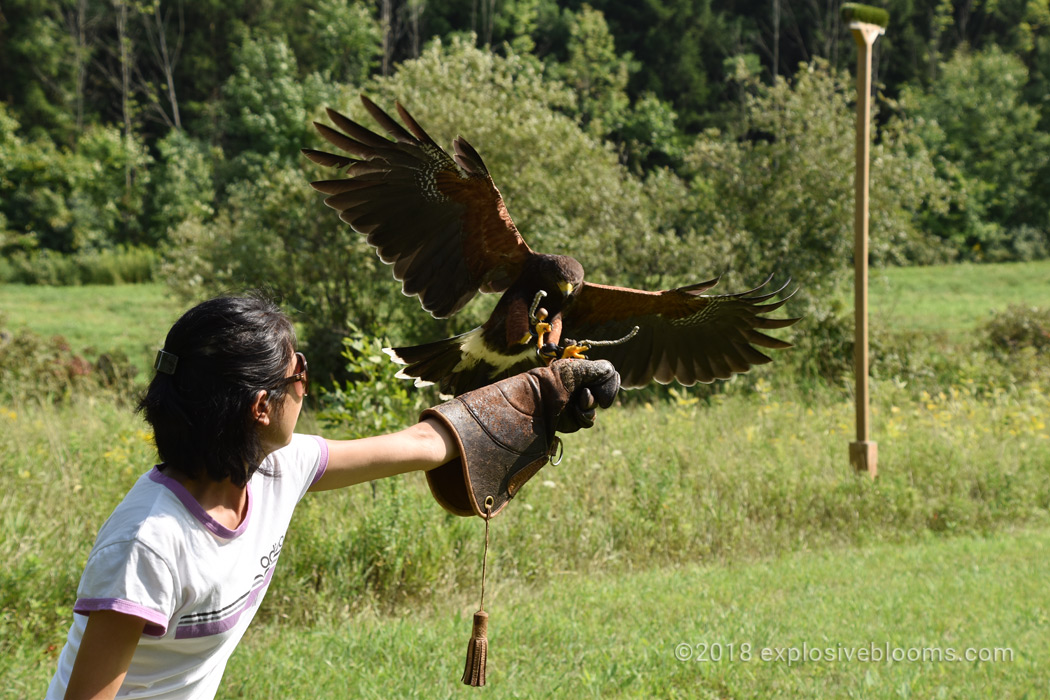 Their body may look small, but those are long wings. I will admit that his wings flapped the side of my head a few times. After releasing him into a nearby tree, hubs put on his glove.

I love this next photo. This was the first time hubs experienced Buck landing on him. I’m not sure what hubs was expecting, but I love the surprised look. 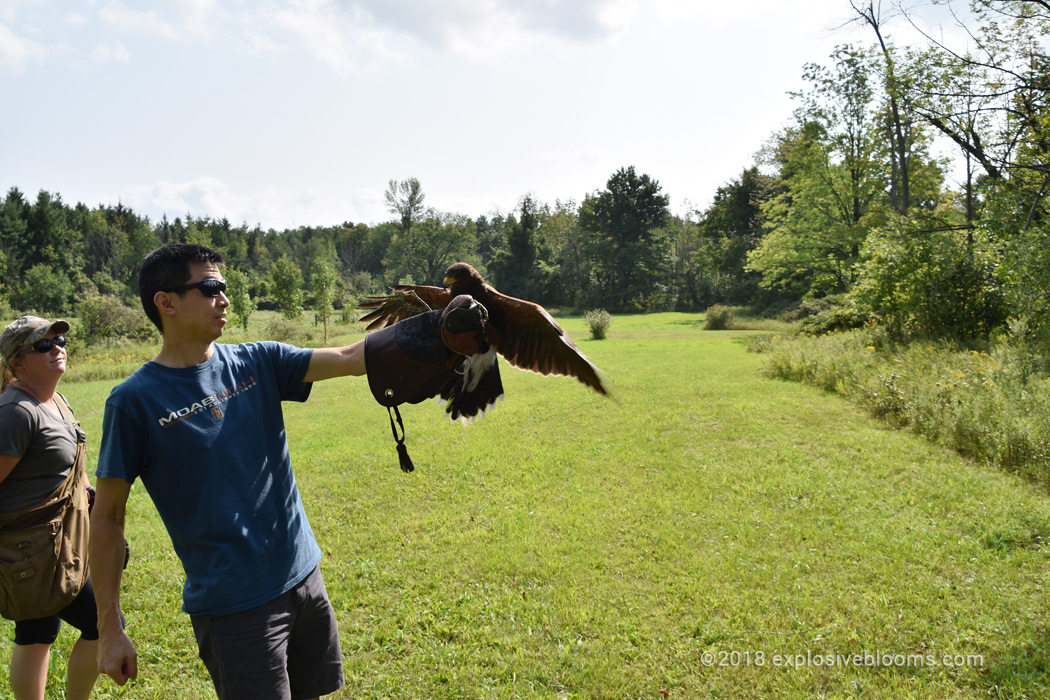 Hubs got to watch me with Buck, but watching and doing aren’t the same thing. We both can’t stop laughing when we watch this video of hubs trying to release Buck.

The next couple photos was fun to watch too. Hubs was attempting to get a selfie with Buck, and surprisingly he was quite cooperative. 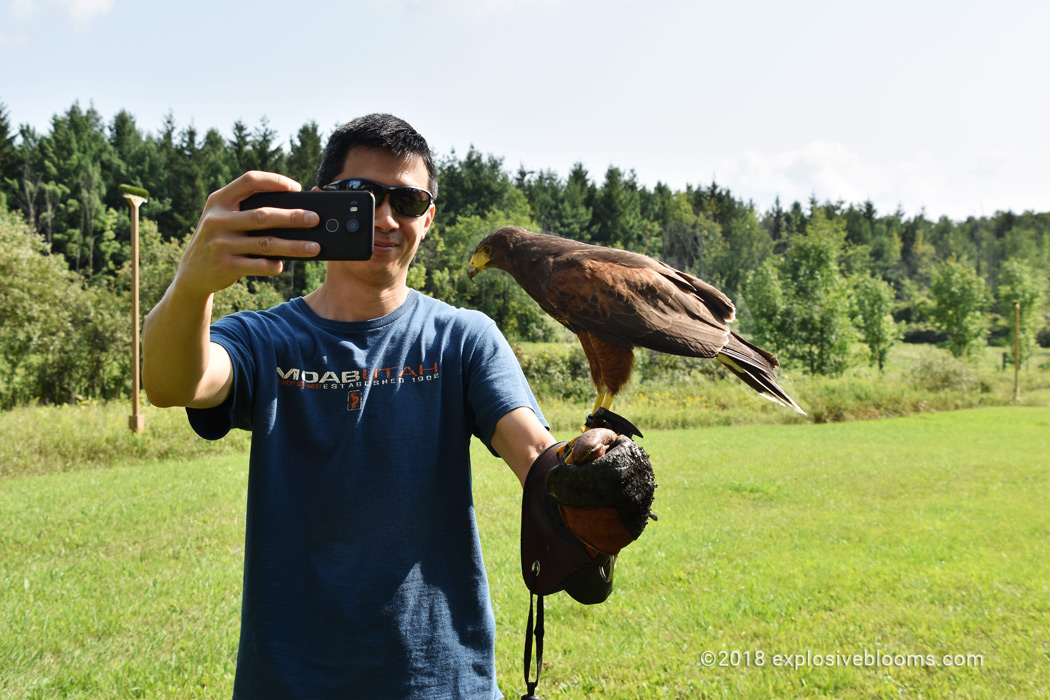 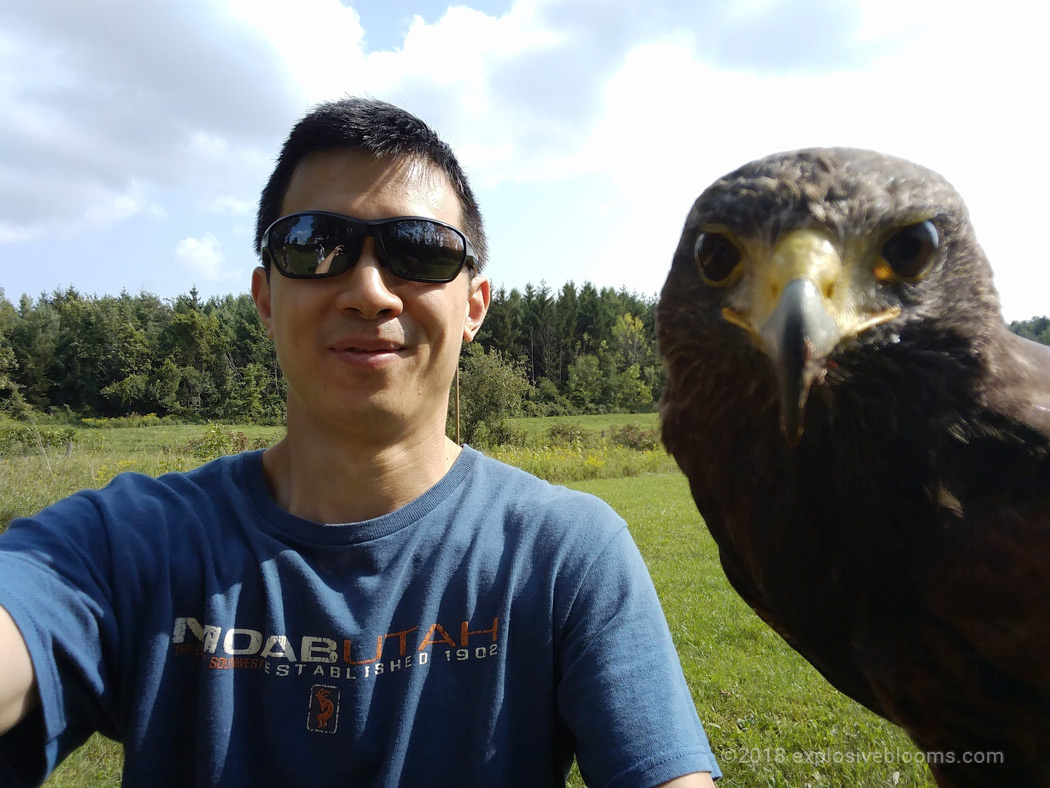 He flew Buck a few more times and was starting to look more like a pro. 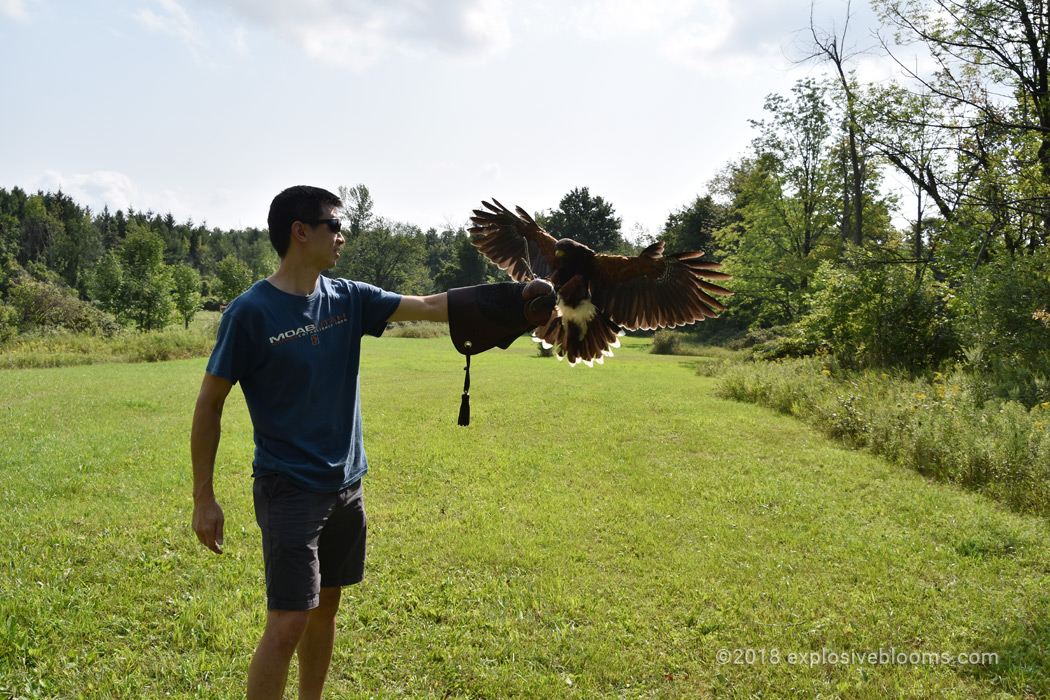 Time to give Buck a rest, so we were introduced to Carmen, another harris hawk. She’s a little bigger than Buck, but she’s definitely not as focused as Buck. We were going to have a chance to experience how birds are trained. Similar concept, except there is only one perch that we direct her to, and each time we get her to fly back to us, we move a little further back. 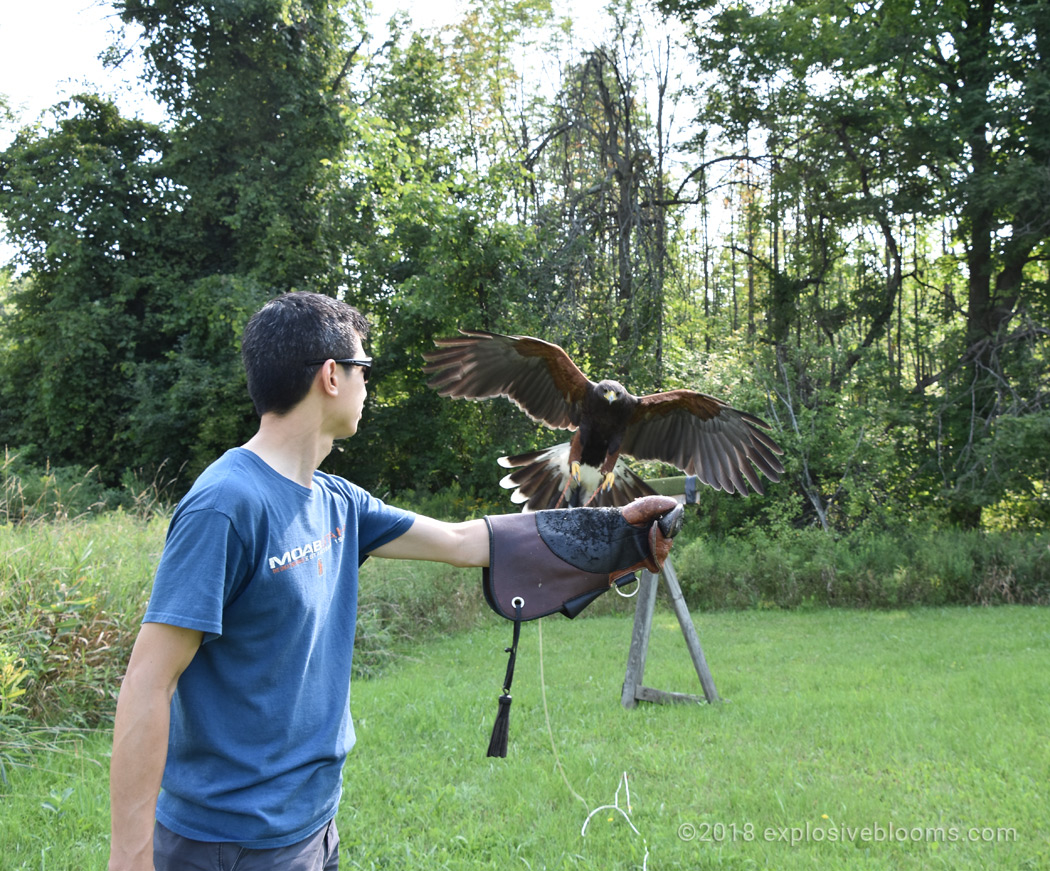 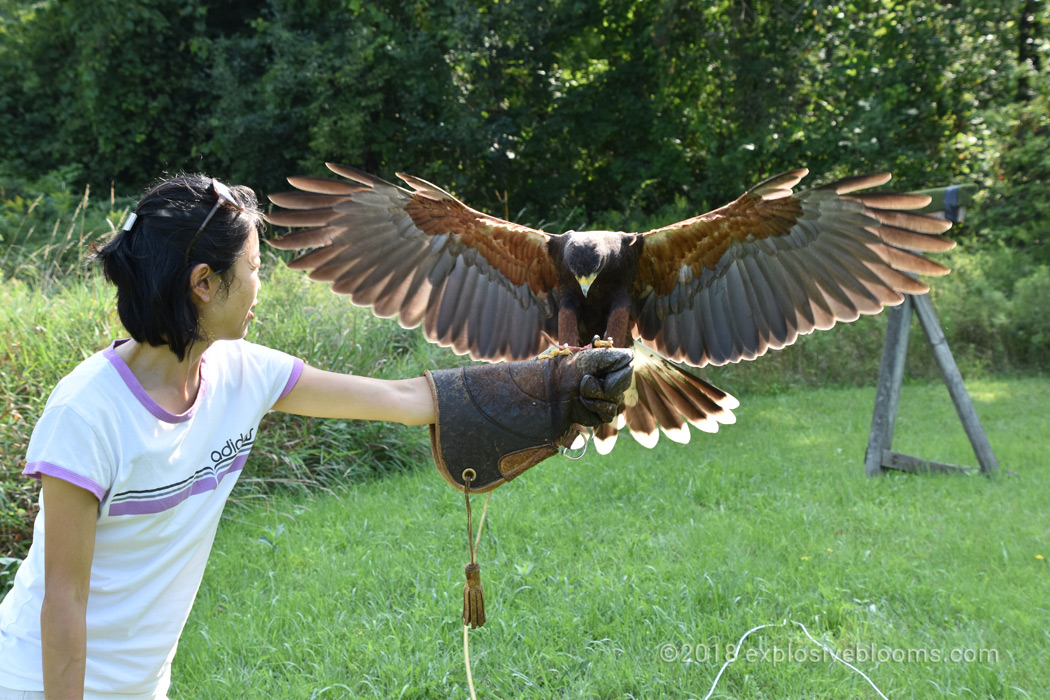 As a final ‘trick’, Rebecca threw some food into the air and Carmen went for it. This required a swoop up, and a dive bomb. 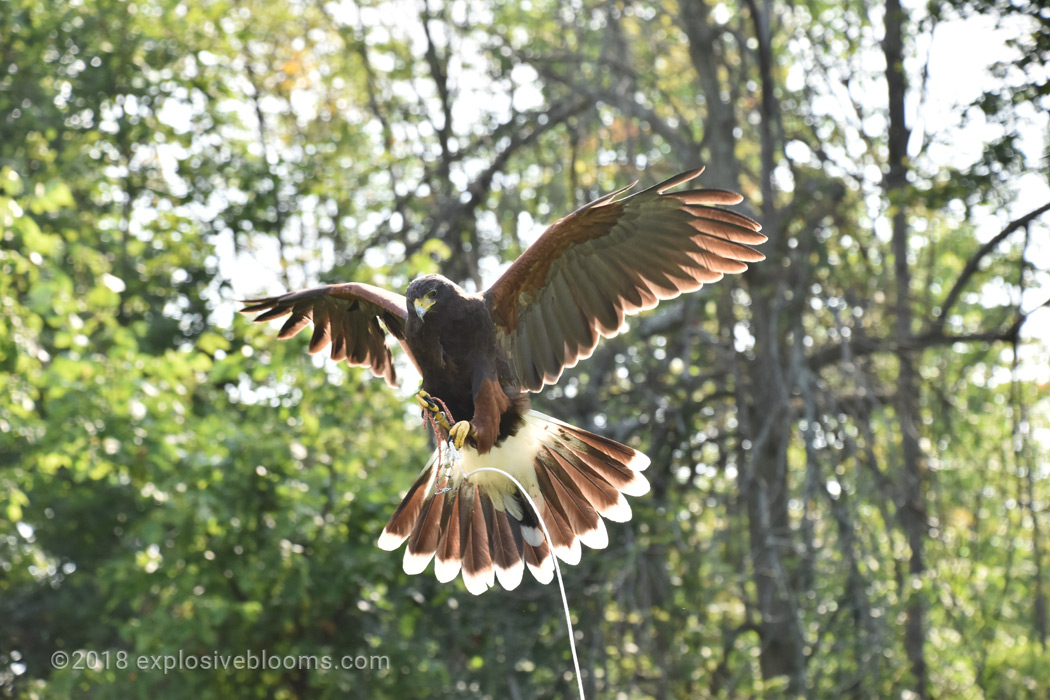 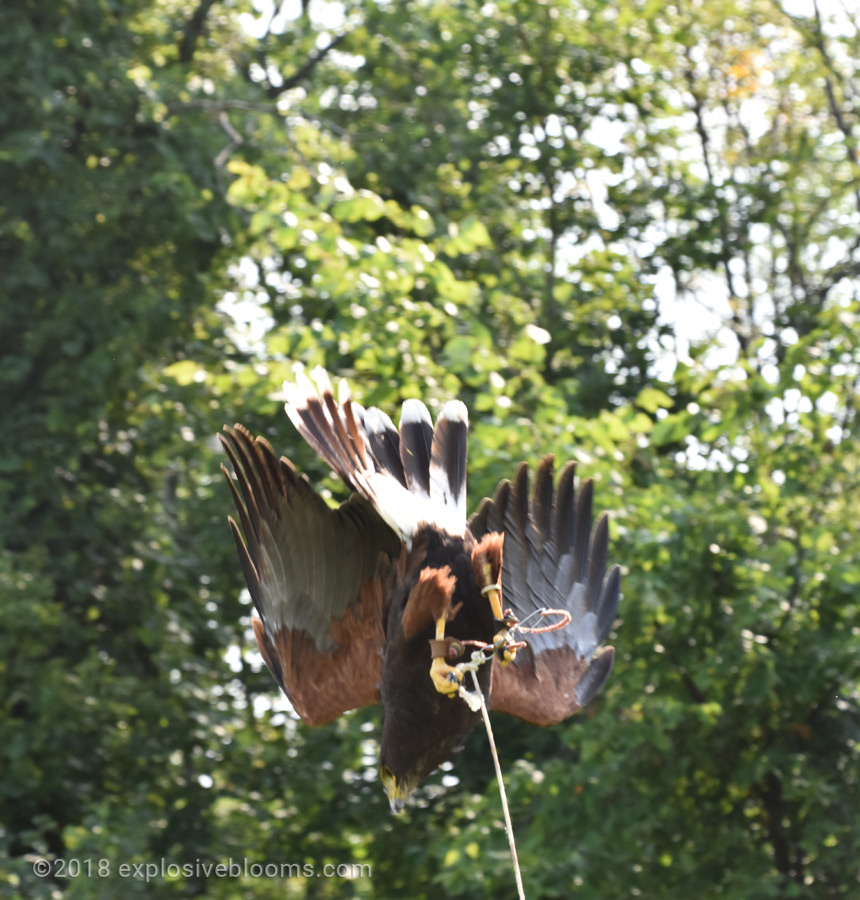 All in all, this was an amazing experience and surprise. What a memorable way to celebrate 10 years together!