This is a photo of my original Kangaroo Paw fern. I bought it last summer. When I first saw it, I was impressed because the one I saw was massive, but I knew it was way too big for my space. When I say massive, I can honestly say that it was about the size of my kitchen table. The plant was a show stopper. I left the store without this plant. I walked in again on the weekend, with hubs. I showed him the plant and he agreed it was too much plant for our space. I returned again the next week on my way home from work and they had a small plant (the one in the photo) and I bought it. My first fern.

It seemed to be doing fine on the table with a west facing window, but around the end of March this year, I noticed a hard bump on a leaf. I noticed a few other bumps and decided to investigate further. The plant had scale. 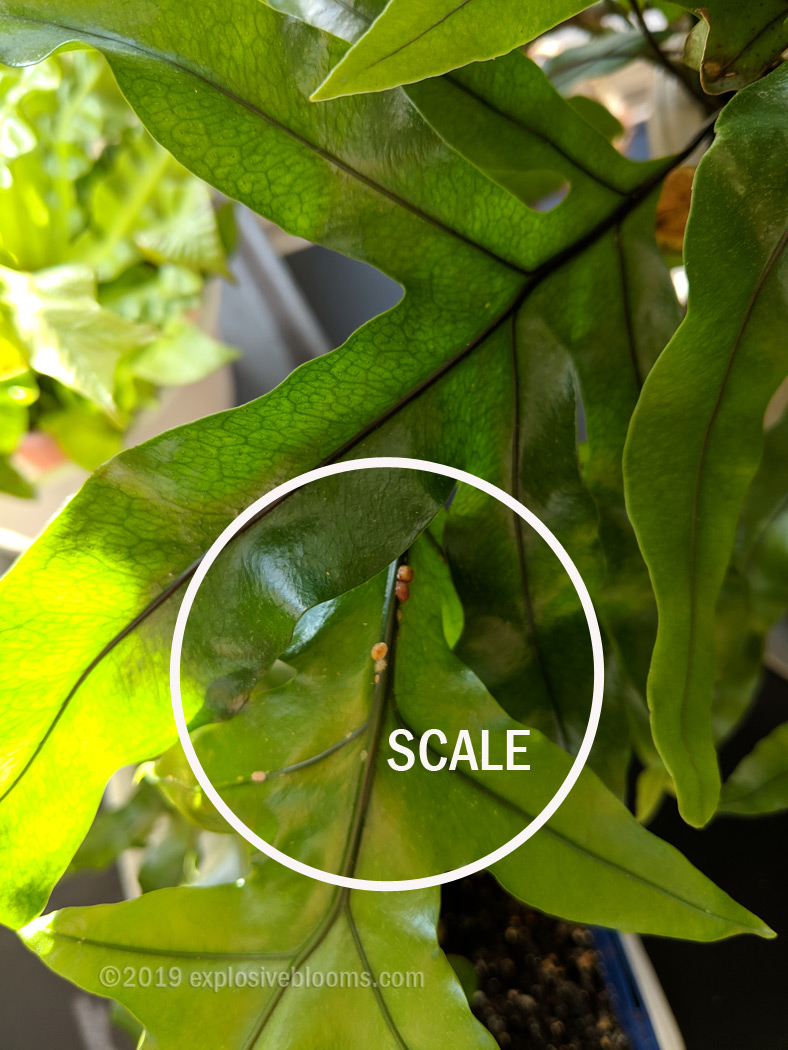 Adult scale don’t look like much. In fact, I thought it was part of the plant. It’s smooth and hard, and it doesn’t move. I immediately moved the plant into quarantine and I posted my issue on Facebook plant groups for advice. It wasn’t sounding good for me, with people suggesting systemic insecticide being the fastest and easiest treatment given that it was a houseplant. Systemic insecticide basically involves spreading the poison through the plant so that as the scale scrape away at the plant, they ingest the poison and die. I would never consider this method for anything edible. I’d consider it for a houseplant, as it’s confined to my house and not outdoors where it could potentially harm beneficial insects. But even if I wanted to, I can’t do this because in Canada, we can’t easily get our hands on pesticides.

Another member of the group sent me a link to a really great podcast about pest control, with Summer Rayne Oakes as a guest on the show. For those of you that don’t know Summer Rayne, she lives in a small apartment with 700+ houseplants!

A planty friend of mine also suggested neem oil, though my understanding of neem is that it will work on the baby scale, but not on the adult scale (because of its armor). I’d still have to pick off all the adults by hand. But I went to a health food store and picked up a small bottle of neem that same week, right before I walked into the plant store where I originally bought Kangaroo Paw fern. I was just browsing and No. Freakin. Way. There on the shelf sat two kangaroo paw ferns. After a lot of a internal debate, I bought it, just in case.

When I got home, I made sure the new fern did not come into contact with the old fern. I still had intentions of saving my old fern, but as I started cutting back more of the leaves with visible scale, I was able to peak into the heart of the plant (at the soil) and my heart sank. The plant was quite heavily infested. Sure, I could try dunking the entire plant in a pail of soapy water, but I felt this was more work than I was prepared for. I bagged up the entire plant – pot, hanger, the whole shebang. I vacuumed both the quarantine area, and where it sat originally, and I disinfected both areas with Lysol. I meticulously checked the surrounding plants.

For good measure, I did spray my new fern once with a weaker neem oil solution – as prevention, if neem can even be used as a preventative measure. I prefer not making this part of a regular regimen as I worry that it could be like antibiotics – take it unnecessarily and maybe pests will become resistant? My belief is that if I can provide my plants with enough of what they need, they can take care of themselves for the most part. Pests can also be something uncontrollable, a fact that I’ve come to understand and accept.

I do miss my original fern – I thought the shape of growth and the large, shiny “paws” were fantastic. My new plant isn’t quite as impressive, but I still love it just the same, and I hope that it will spread into a similar shape. I did a little bit of reading on the kangaroo paw fern and found that I hadn’t provided the best environment for my original plant. Some of the issues included being in direct sun, being in a drafty spot. not providing it any additional humidity. My new plant is now east facing, and not even at a window, so it’s in much lower light. I haven’t figured out if that’s actually what it prefers. I mist KPF2 daily and I learned that it likes to be well watered (and not allowed to dry out). To solve for the watering issue, I discovered watering stakes from Summer Rayne. I bought a package off Amazon to test. For the most part, people have said good things. Of course there are those that have not had success with the product. 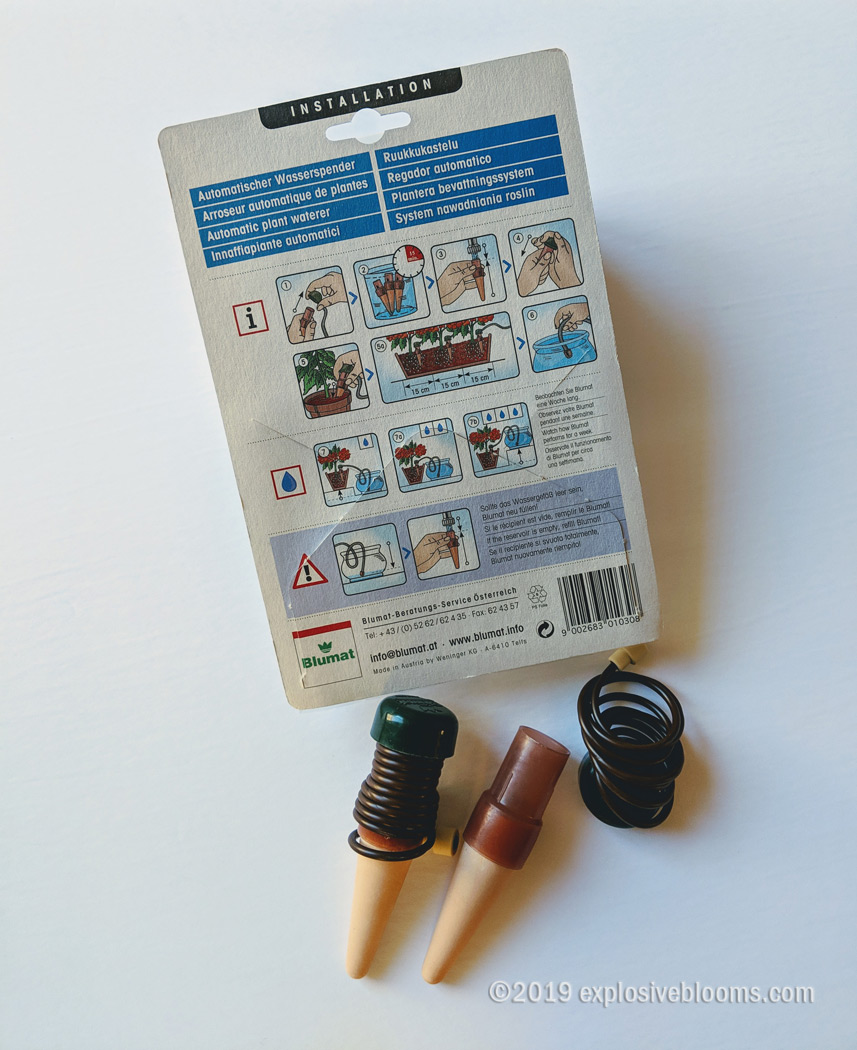 There are different brands of watering stakes, with some looking like cheap knock-offs. I settled on the Blumat brand because it seemed legit. I hoped it would work because 3 for $25 isn’t cheap. When it arrived, I followed the instructions and soaked the stakes for at least 15 minutes. 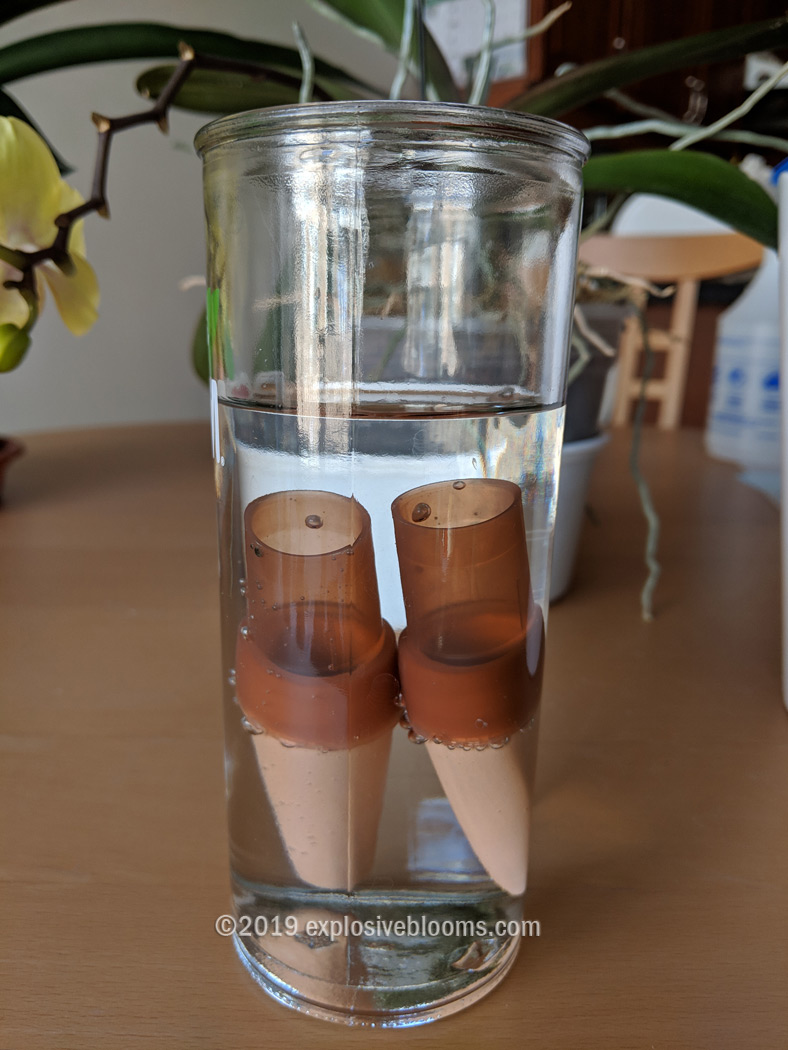 In the meantime, I watered KPF. Once the stakes had soaked for the required time, I filled them with water, capped them, and stuck both into the soil. I filled a small jar with tap water that had been sitting out overnight. I do try to water my plants with water that has been sitting in jugs to off-gas some of the chlorine. I’m not sure if Toronto tap water has so much chlorine that this makes a huge difference, but I’ve just become accustomed to doing this and it’s no extra work for me.

All that was left to do was drop the ends of the cords into the jar of water, but they didn’t want to stay submerged. The plastic ends bobbed on the surface, so I loosely tied an elastic band around the two cords, and attached a small rock with another elastic, and voilà! 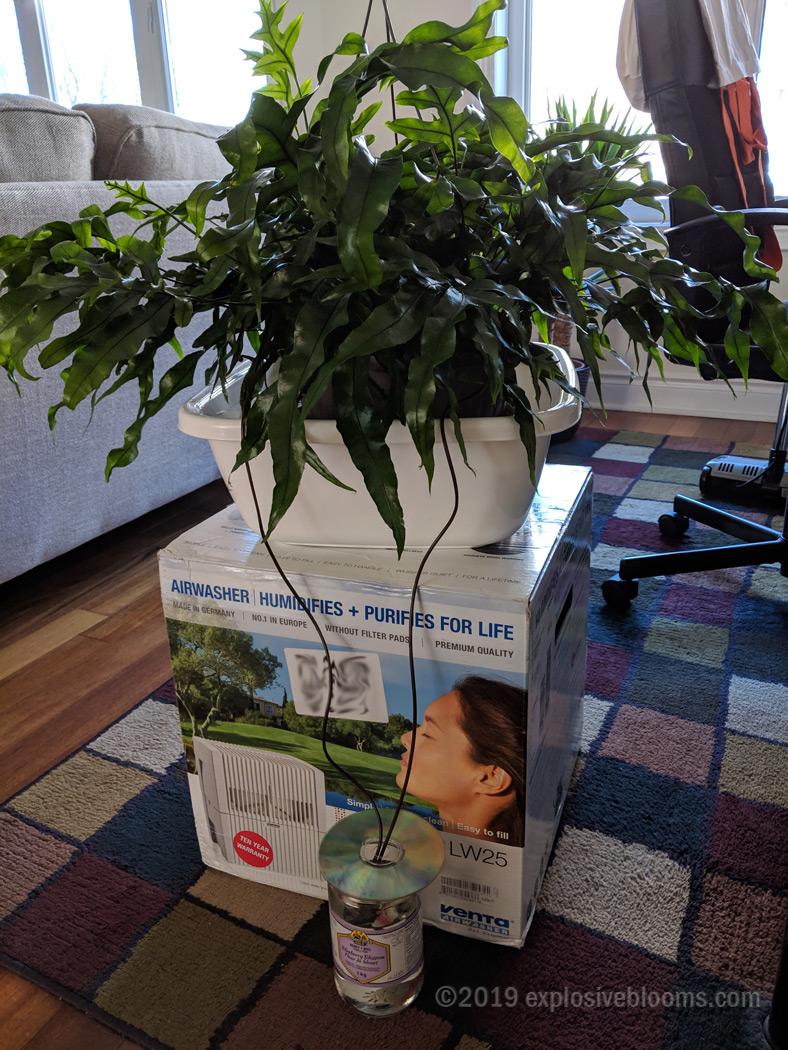 The jar of water sits lower than my plant and this is on purpose. The idea behind the watering stakes is to water through capillary action.

Water moves through the plant by means of capillary action. Capillary action occurs when the forces binding a liquid together (cohesion and surface tension) and the forces attracting that bound liquid to another surface (adhesion) are greater than the force of gravity. Through these binding and surface forces, the plant’s stem basically sucks up water—almost like drinking through a straw!

The Blumat takes advantage of the capillary characteristics of the soil and its siphoning action. The system supplies plants with water directly through porous clay stakes. As the soil dries, the ceramic stake delivers water gradually into the surrounding earth-thereby creating a sub-pressure within the stake. The sub-pressure causes water to be siphoned up from the nearby reservoir of water. This siphoning action only happens if the reservoir sits below the stake

You can set up the stakes to water from above your plant, but then you are relying on gravity, which could end up drowning your plant.

I’ve been using the stakes since April 28 (today is the 11th day), and I believe it’s been working successfully. I say this because: 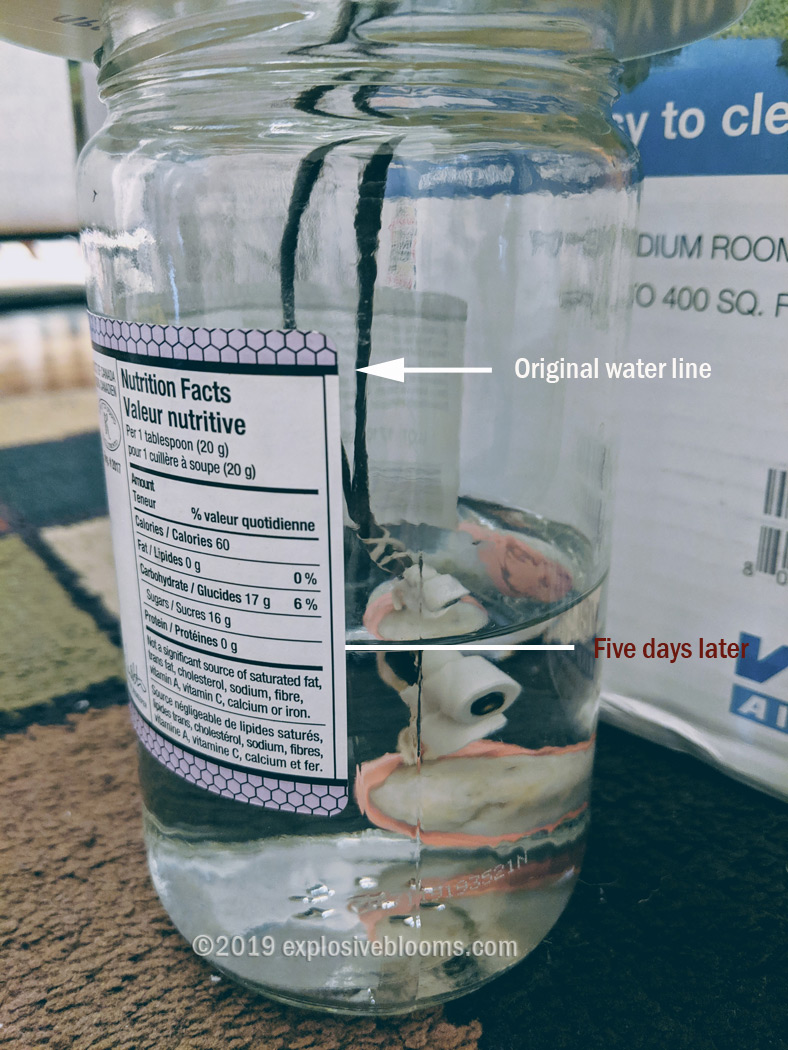 On May 4, the plant had taken up 50% of the water. As the days (very slowly this year) begin to get a little warmer, the temperature in the house also rises and I’ve noticed that KPF is taking up water at a faster rate. On the 7th day, I topped up the water in the jar, back to black line. Today, four days since the top up, the water line dropped down to the bottom of the label. I’ve topped it up once again.

Why I have I chosen to implement the watering stakes for this plant? I’m hoping that by keeping the moisture level consistent, it will deter pests. From other plant people’s comments on ferns, they like staying hydrated and they appreciate a humid environment. I don’t have room in my bathroom for more plants at the moment, so additional humidity is achieved through daily misting. But in doing some research as I am writing this post, I may be providing the perfect environment for scale! According to The Ultimate Guide to Houseplant Pests & Diseases, by Jim Hole:

I’ll have to keep an eye on this one. And if I do happen to discover scale, hopefully I’ll catch it sooner. As Jim says, “as hard as scale is to battle, you can get rid of it.”