I spent a lot of time Googling this question without getting a straight answer. Why did I want to know? I ordered some American Passion Flower seeds from Richters in January, after realizing that the previous year I had grown Passion Fruit (seeds also from Richters) with the hopes of having passion flowers, but ended up with nothing but a mess of vines. I originally assumed you’d have flowers before the fruit… The genus Passiflora has some 400 species. They tend to grow as understory plants.

There are also different species of Passiflora, and I believe the passion fruit we purchase at the grocery store comes from passiflora edulis. It turns out that the American Passion Flower seeds I have are passiflora incarnata, also known as maypop because the fruits pop loudly when you step on them. Are these little oval fruits edible? It depends on your taste.

Back to my question – can a passion flower vine grown from seed flower in its first year? Many articles I found online didn’t really address that question. On plant forums, I’d come across snippets of information on flowering, but not exactly what I was after. Some more relevant answers made it sound unlikely because they would say flowers on develop on established vines. But then I came across a helpful post, PASSIONFLOWER, FROM SEED TO FRUIT AND BACK AGAIN written in 2012. I decided the person that wrote this post had some good experience, so I reached out and she gave me hope! 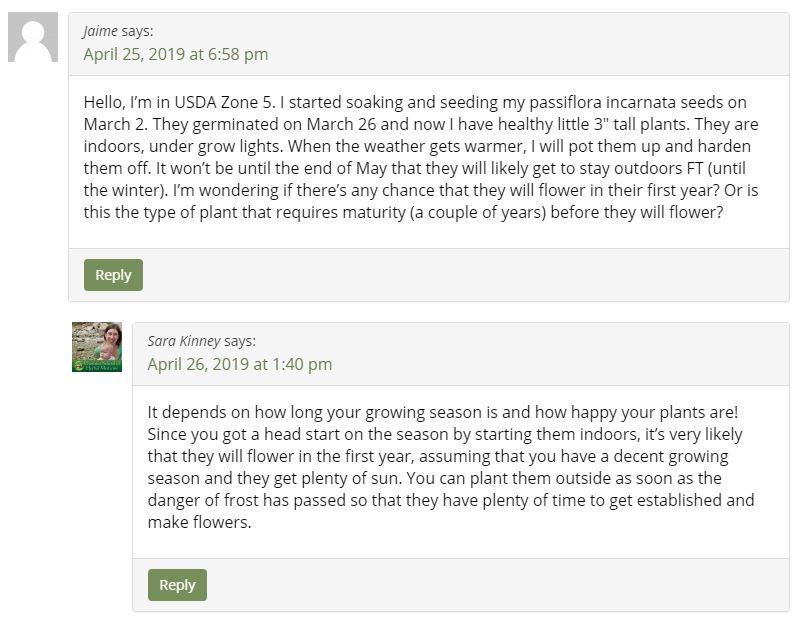 Here is the story of my experience. My passiflora incarnata seeds arrived early in the year. 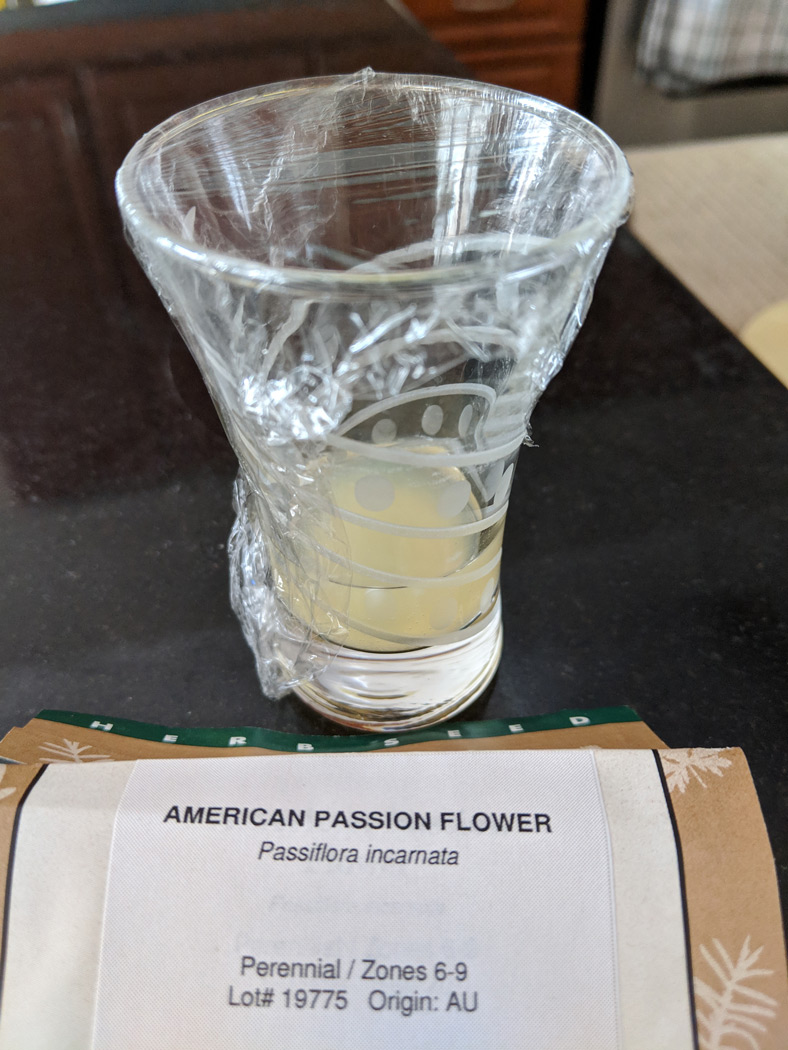 March 2, 2019, I took some sandpaper to four of the seeds to rough up the hard outer “shell”. I then dropped the seeds into a little cup with lemon juice. Some people stratify their seeds by chilling their seeds, but based on germination success the previous year using my method, I stuck with it. I probably waited two days before I rinsed the seeds and dropped them into small pots with seed started, and placed them under cover in the sun. 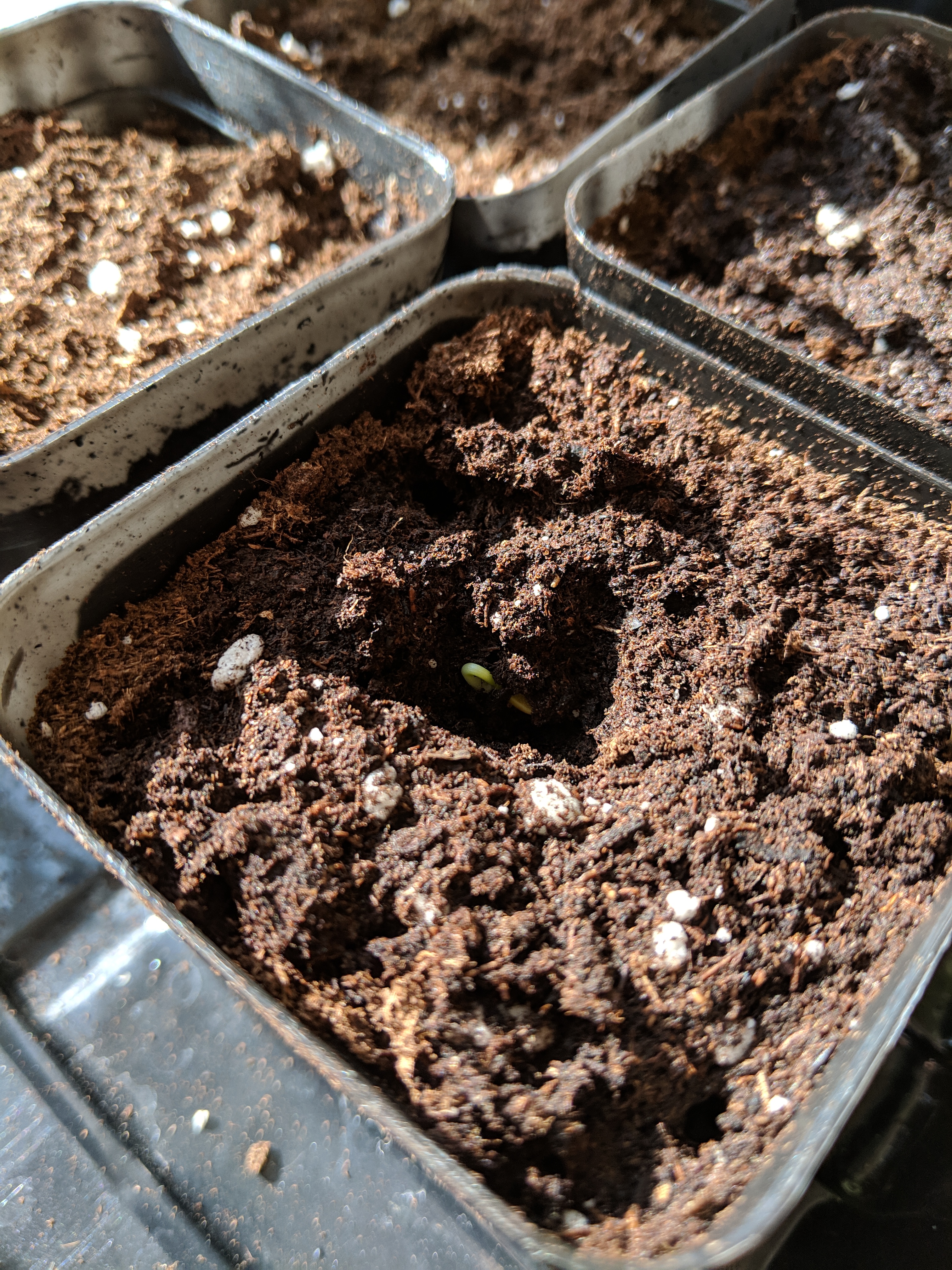 March 26, I noticed something starting to push up out of the soil – one seed was obviously germinating. 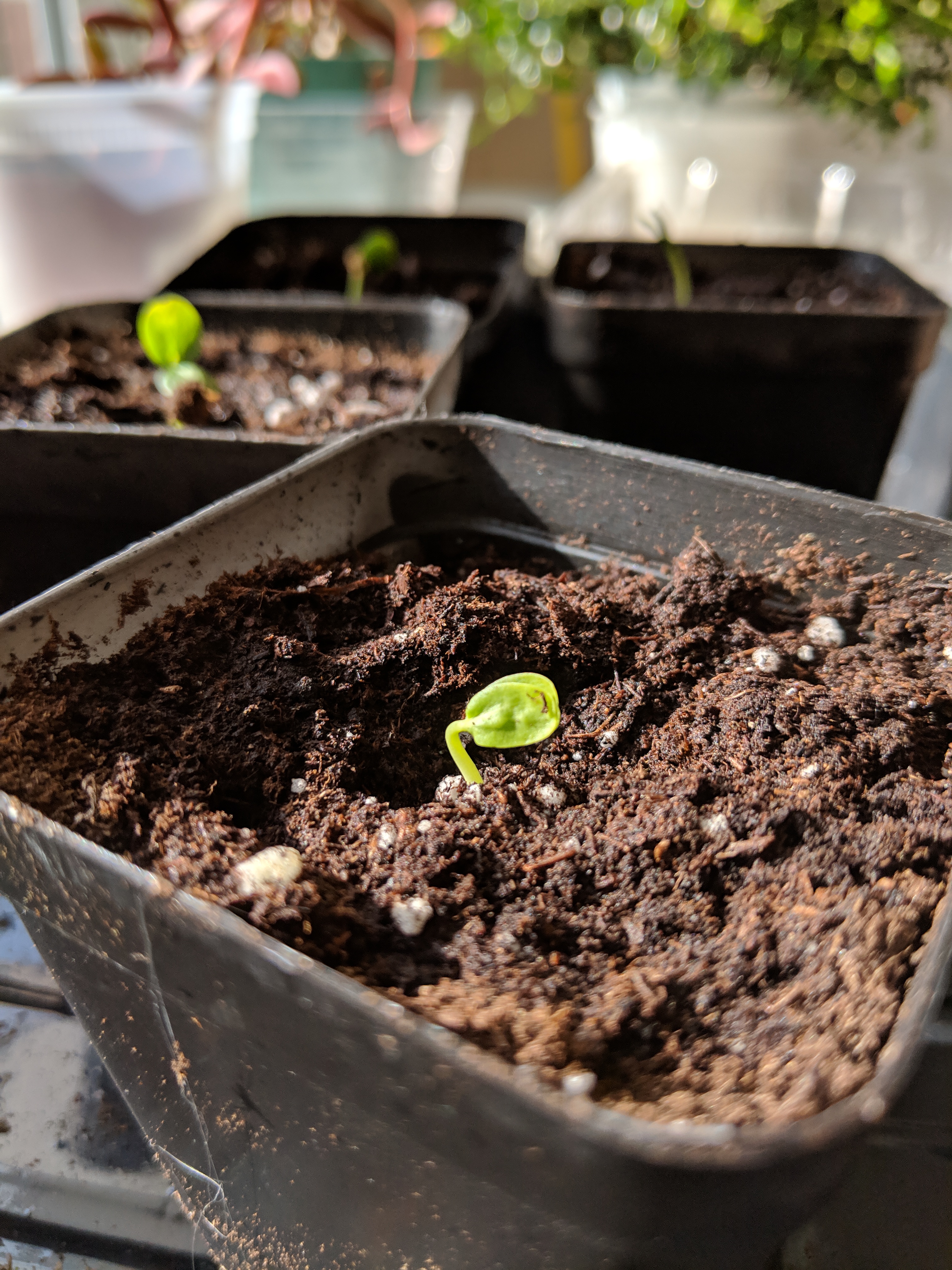 March 29, all four had germinated and were looking beautiful!

April 4, I moved them under the grow lights (about 18 hours a day). It doesn’t feel like spring is ever arriving! A climatologist with Environment Canada mentioned that our winter had 30% more snow than the previous winter. 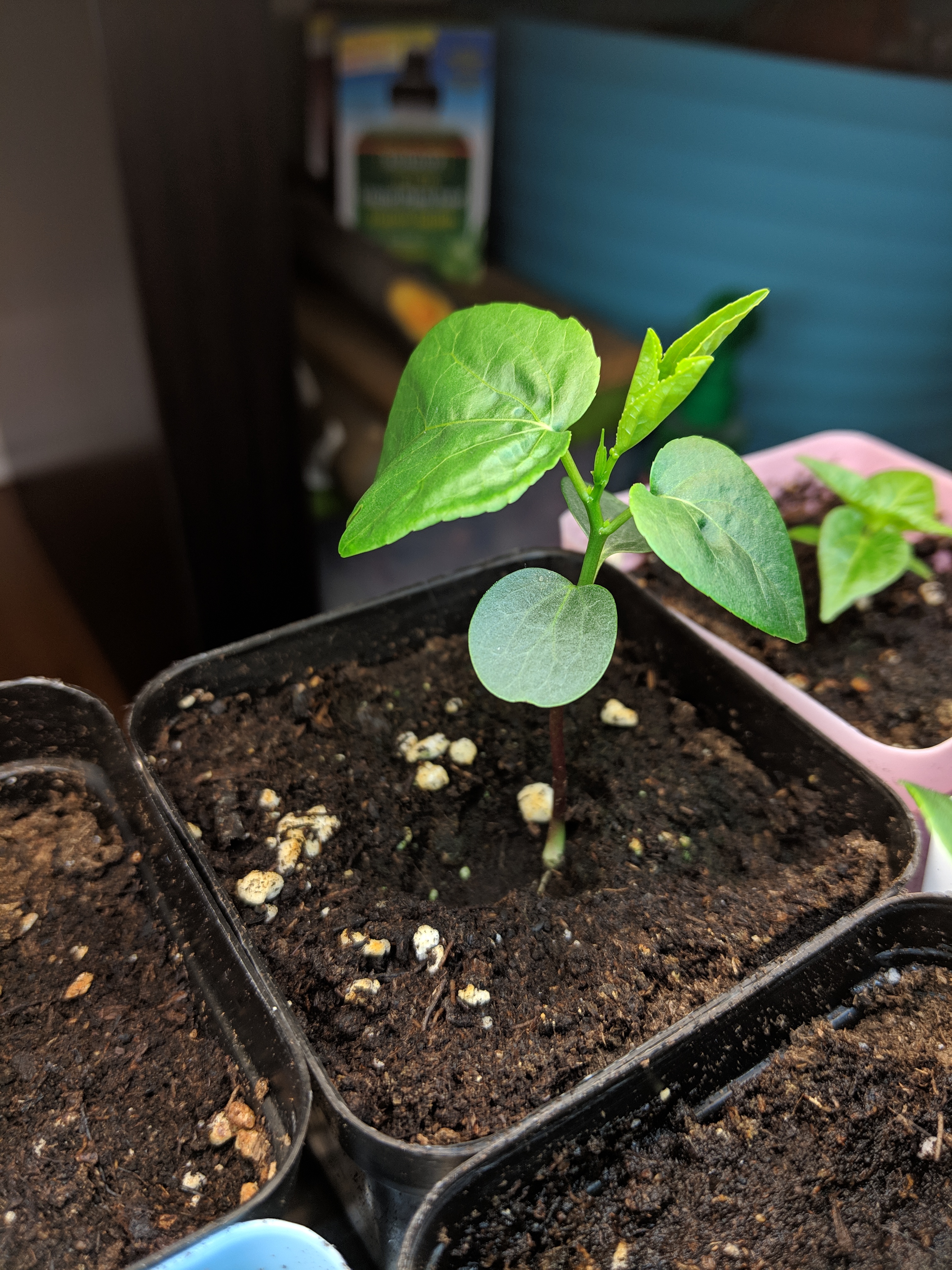 April 17, the plants were growing, with at least a set of true leaves fully developed.

May 2, they started to spend a little bit of time outdoors, getting used to the sun. But they’d still spend nights under the grow lights indoors. The weather has snow very little improvement. 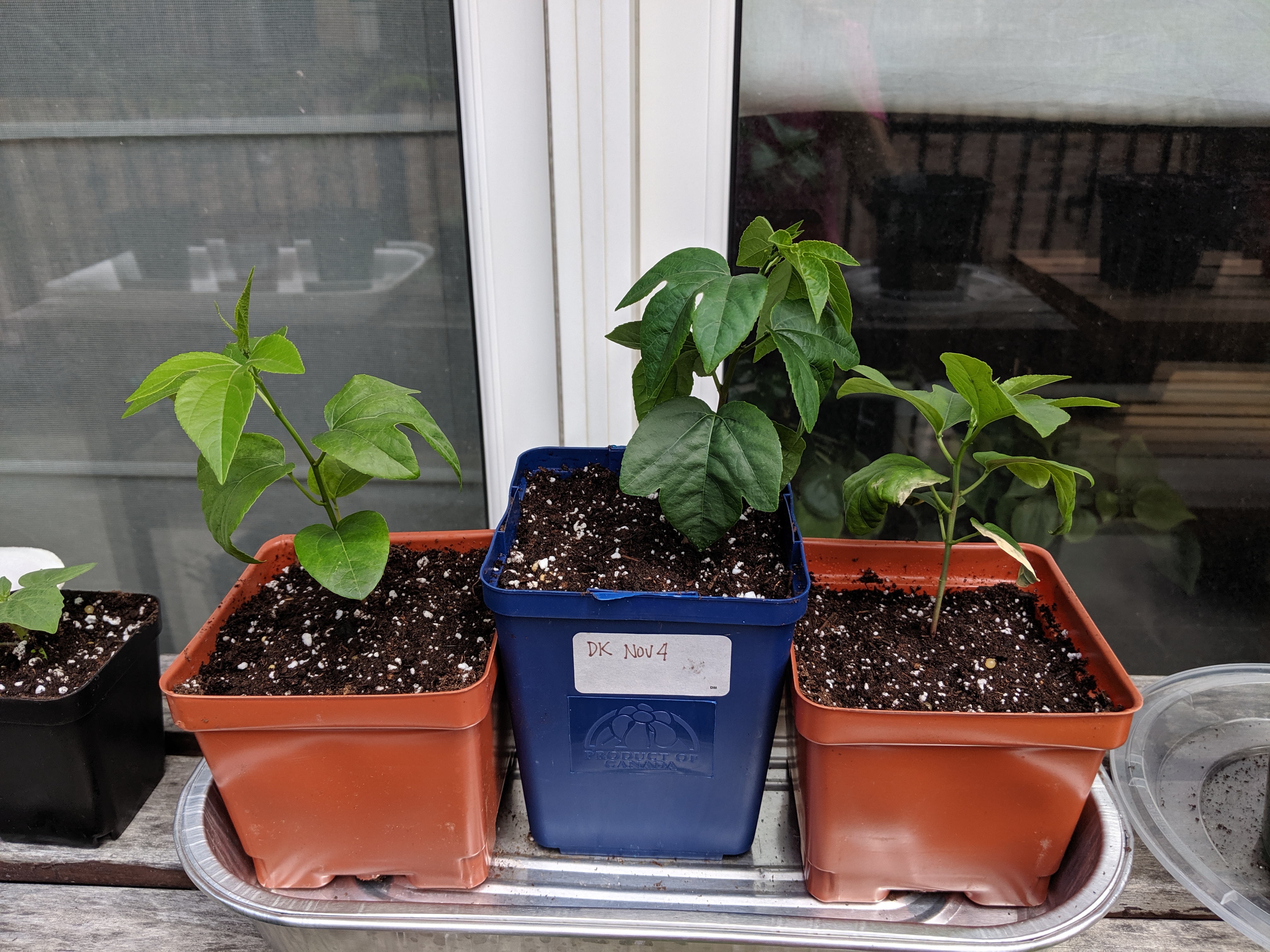 May 11, transplanted into slight larger pots. It’s only starting to get a little nicer outside. Only four days earlier we reached highs of 7C! The month of May wasn’t giving me much hope for a good growing season. 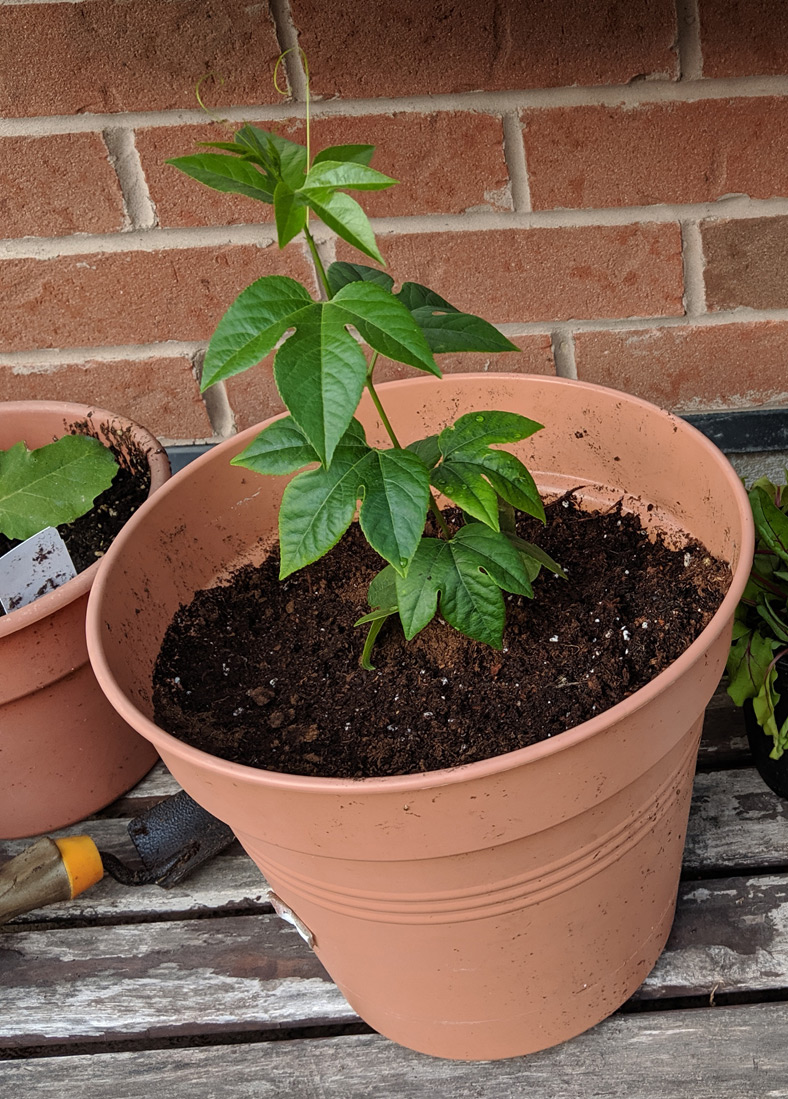 May 30, transplanted outdoors into 10″ pots (only one shown above)

The month of June continued to be depressing as it was wet, but at least temps started to slowly rise. It definitely was a slow start for my garden. Then it was sometime in July that we started experiencing consistent warm days, even heat alert days. This week has been dangerously hot, with today feeling like 44C with the humidex. 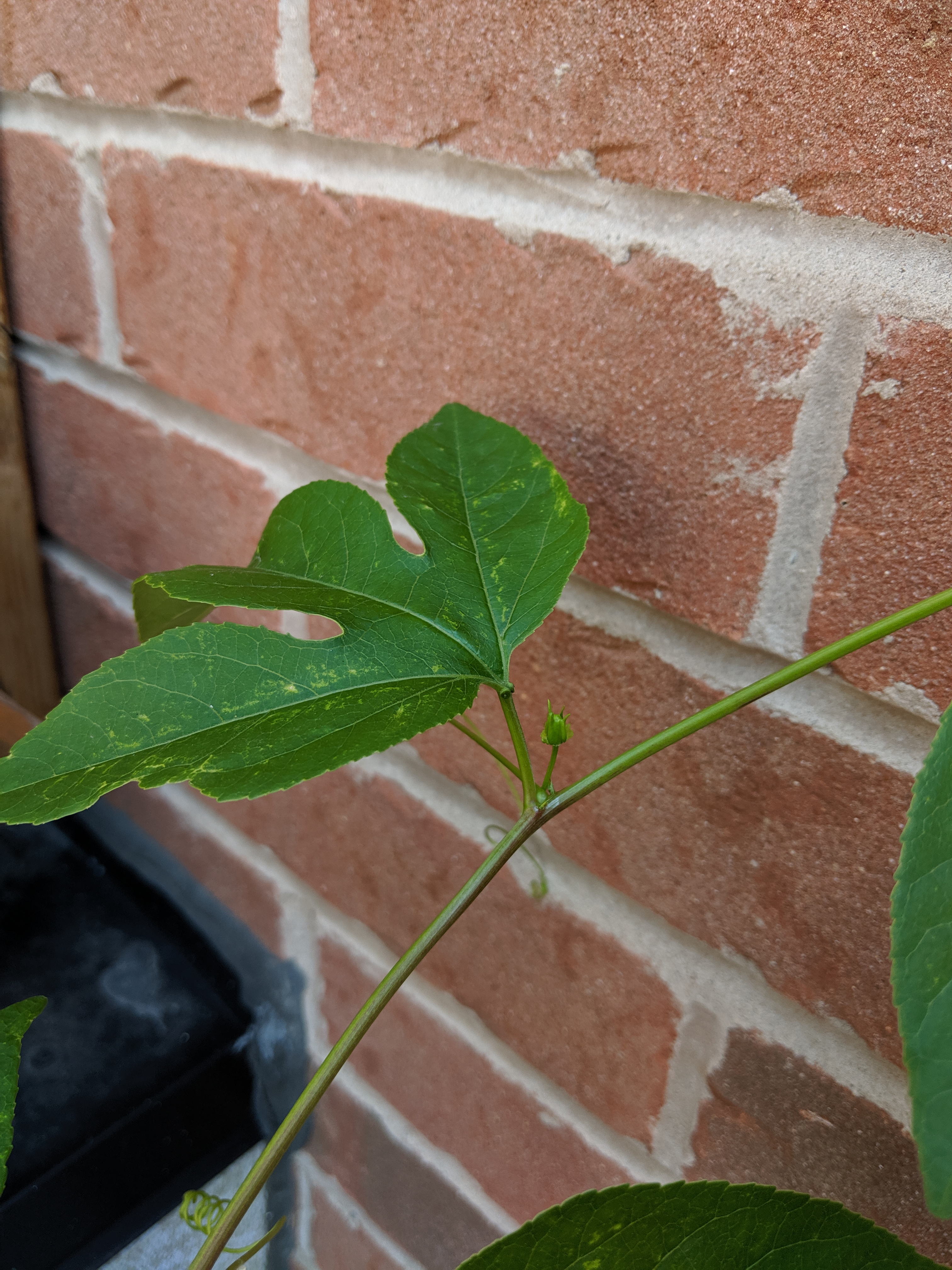 July 7, was the first time I noticed growth that represented a possible flower?

It was around this time that my two main vines were starting to really outgrow the small cages. The vine closest to the house was starting to climb the brick unsuccessfully as the tendrils had nothing to hang on to. The other vine was trying to wrap its tendrils around surrounding plants – it was time for improvements. I remembered I had a wooden trellis in the garage…. 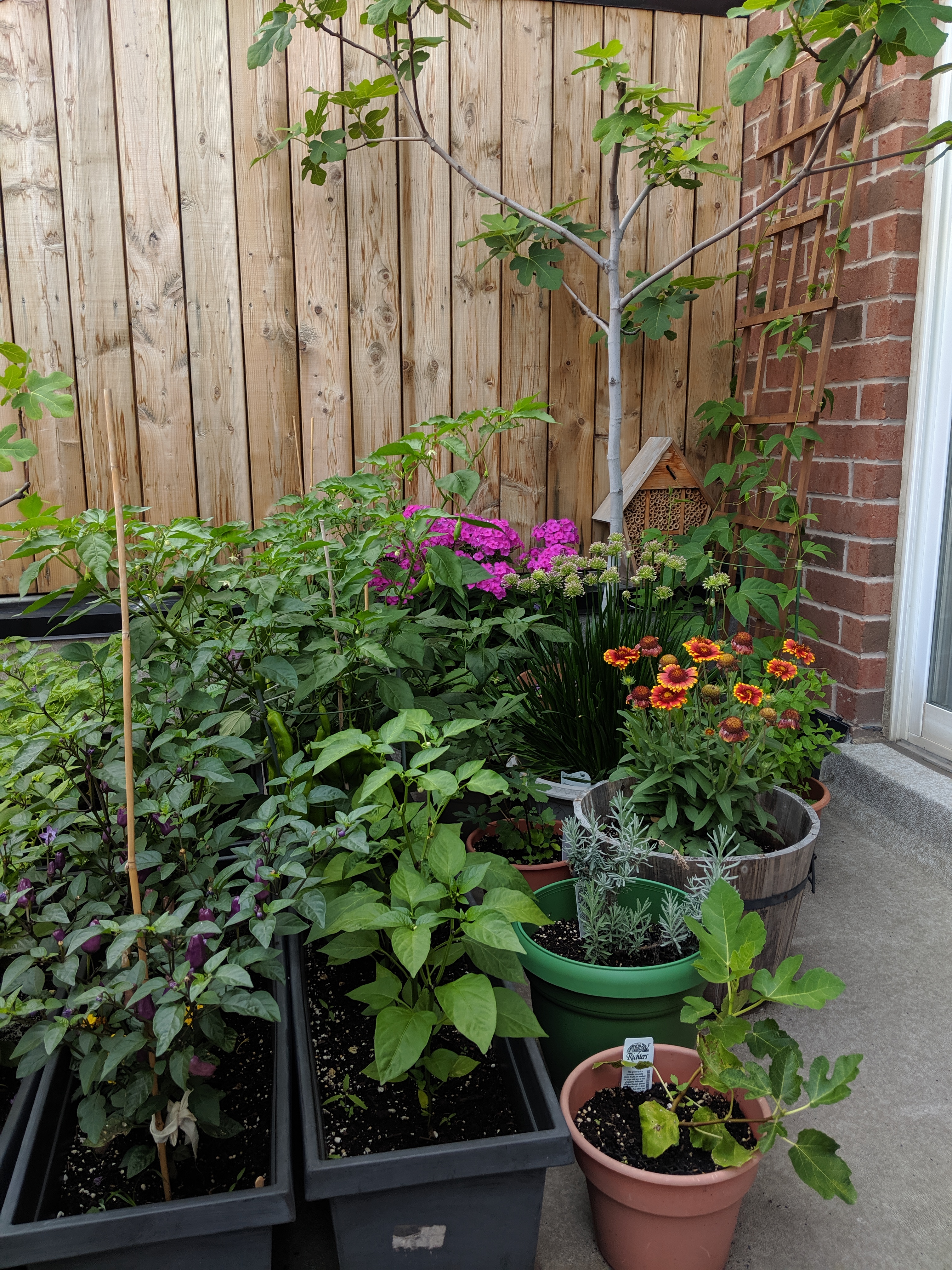 As you can see, the vines are in a fairly protected spot. It’s not as windy in this spot, yet it still gets hit with full sun (slightly shaded by all the other taller plants) 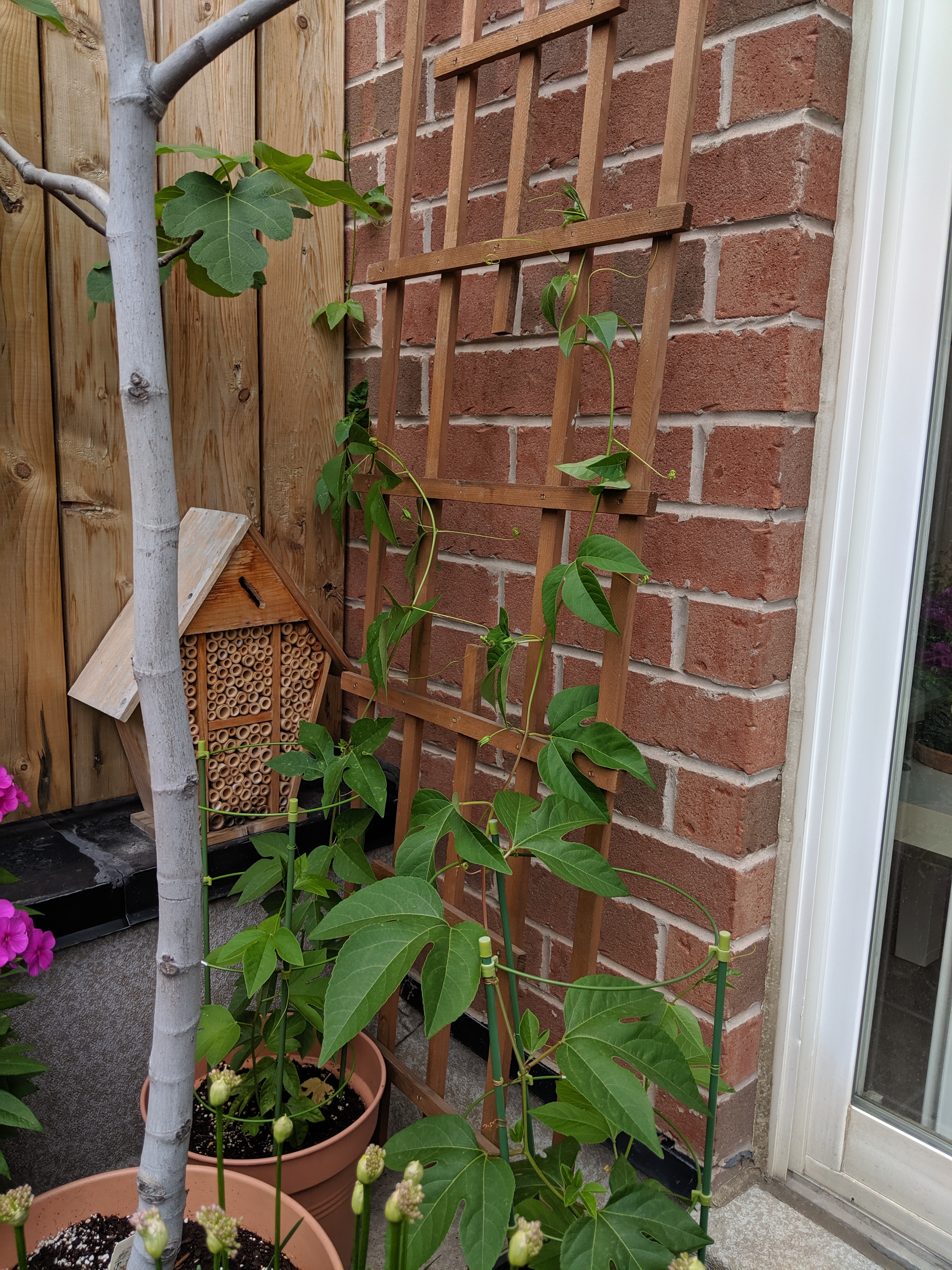 The two potted vines are what’s holding up the trellis at the base. Hubs then came up with the idea of sticking a thin bamboo stick into the fence near the top of the trellis, as some support to prevent the trellis from falling forward.

July 19 – 10:03 am, I snapped this photo of a flower bud that was showing a little bit of white. But it still looked tight, so I wasn’t expecting anything. 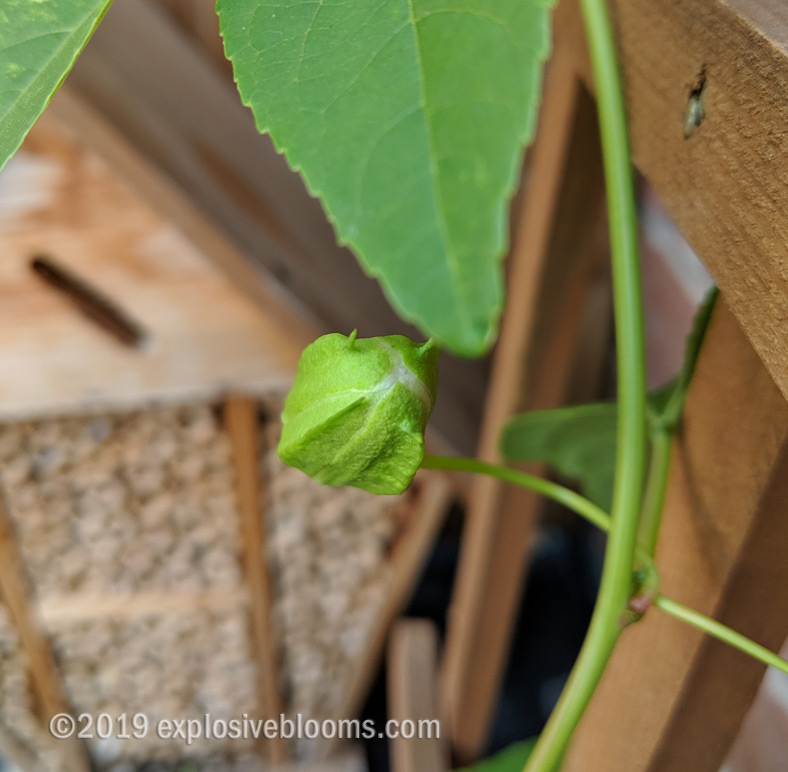 3:00 pm, as I was about to go back inside, I was stopped dead in my tracks and I gasped. I truly gasped, making this little sound of disbelief mixed with surprise. 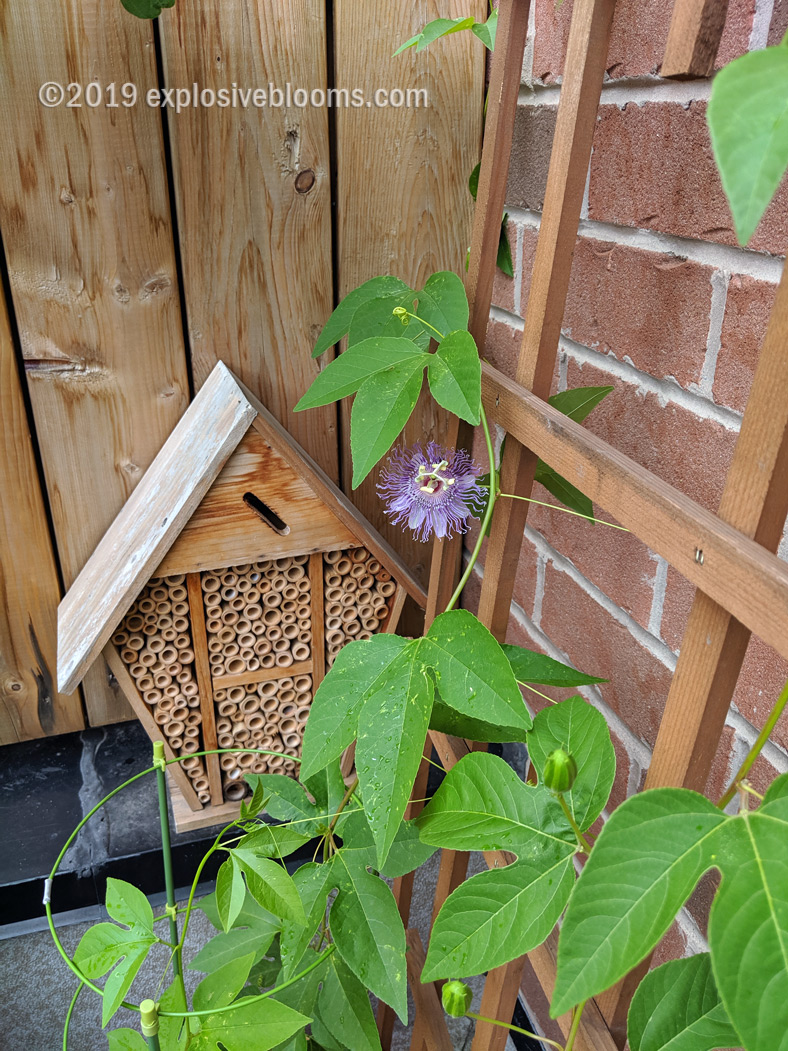 Small, but not difficult to miss because it’s bright and like no other flower I’ve ever grown. As soon as I caught my breath, I ran inside to grab my phone to take photos. I’m not sure why I ran because it’s not like the flower was going to fly away, though I’ve read that the flowers last for only one day before they begin producing fruit. I wish that I had captured the opening of this beauty as a time lapse – how cool would that have been?! This flower looks absolutely alien – so delicate and exquisite. I lightly ran my fingers on the thin purple fringe and I put my nose up to it and inhaled deeply. She gives off a beautiful aroma.
Side view: 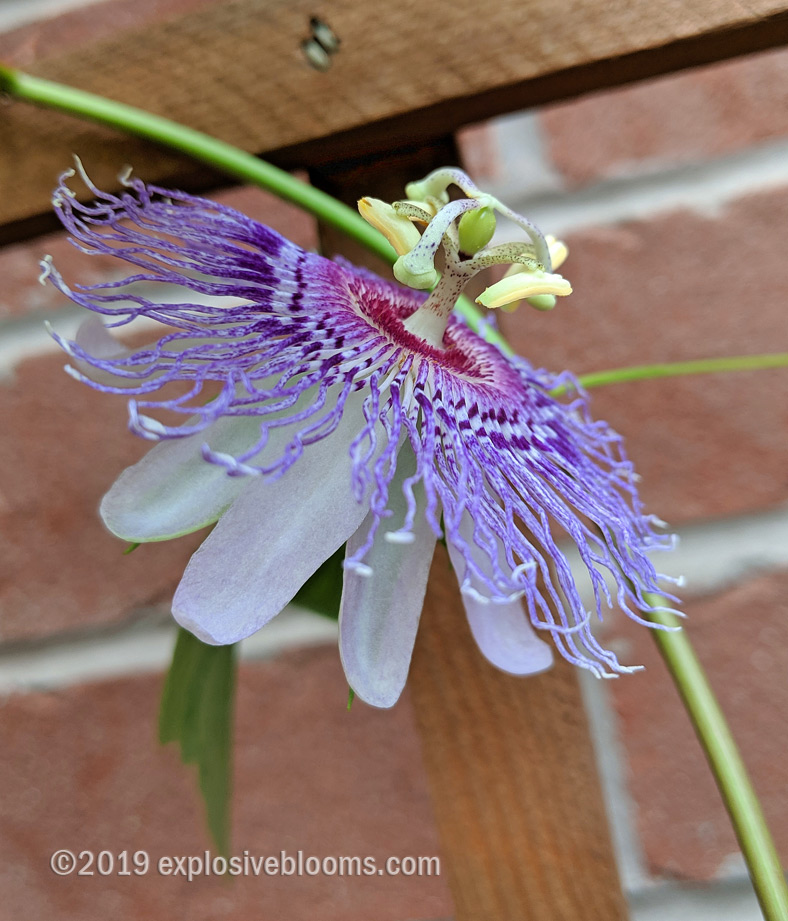 View from straight on: 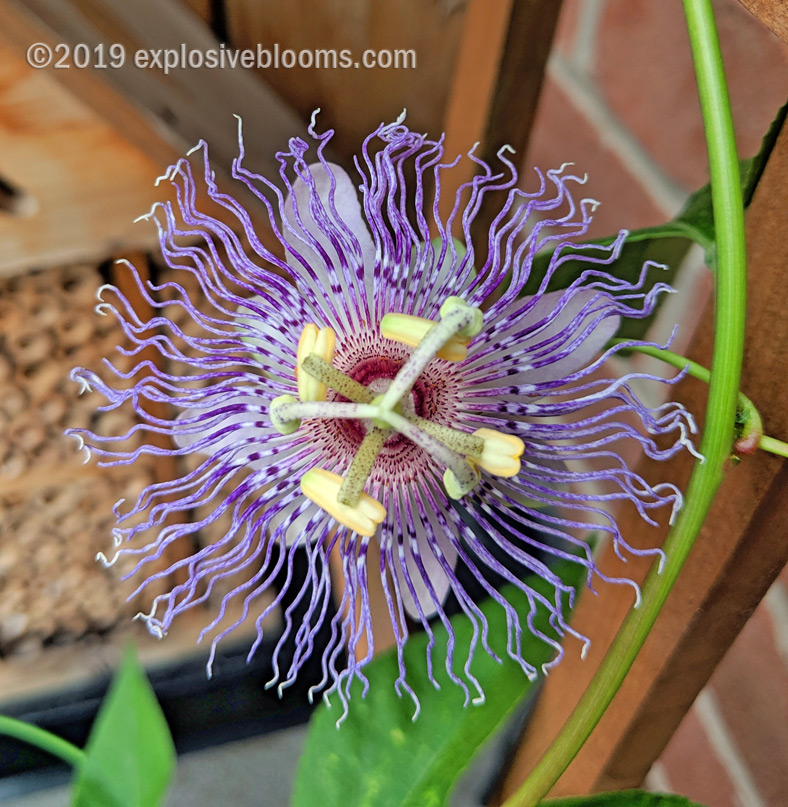 Forgive the quality the next photo, taken at 9:07 pm. It’s closing up. I wonder if this will re-open tomorrow, or is it as I’ve read – lasts only a day? 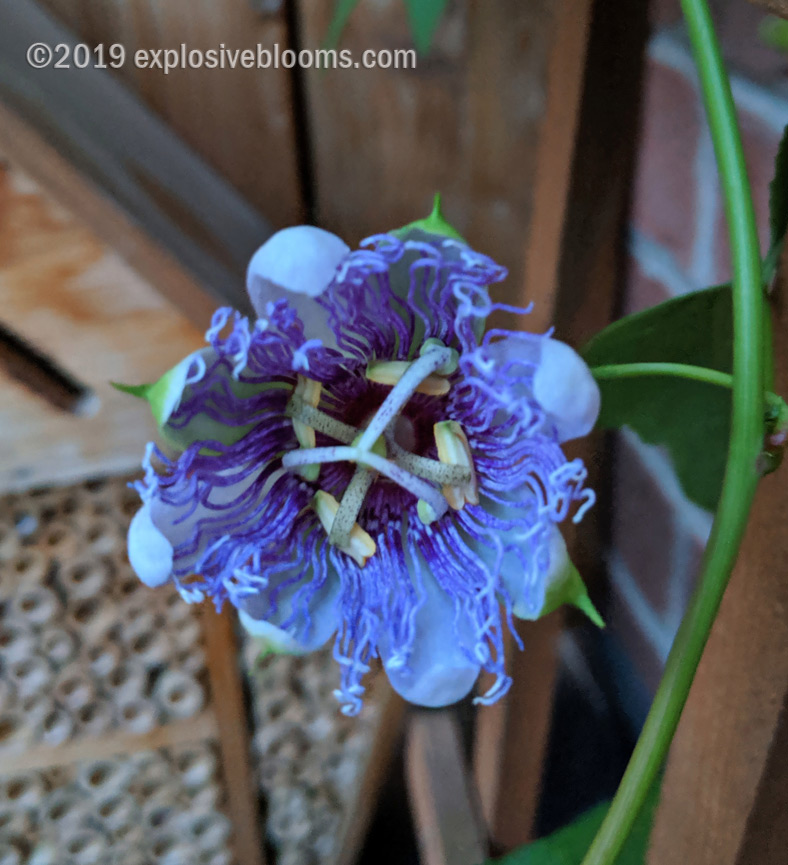 I’ve mentioned that I have two vines growing up this one trellis, and both vines have flower buds. I have another plant in a 5-gallon container, but it’s sitting on the bottom shelf of my potting table – sun is much less intense there, and this plant has no trellising. The final plant is still in a 4″ pot (because I ran out of space) and its tendrils are wrapping around my Big Pink Sage stems. Neither of these plants have any buds. This is either an indication that it needs full sun, or it needs trellising – I’m going with sun.

Now the question is can I overwinter a potted plant? Some people say you can overwinter indoors if you get lots of light, while others suggest overwintering outdoors. I cannot do that in my area. I overwinter plants in my garage. Here are some useful links I’ve found and will refer to later in the season:
* Floral Encounters
* Toronto Master Gardeners
Someone also mentioned that fruit only grows on new growth, which implies pruning is necessary.

Can a passion flower vine grown from seed flower in its first year? Absolutely!